Talking death, Facebook, Shakespeare and why VR could be really problematic with Marshmallow Laser Feast 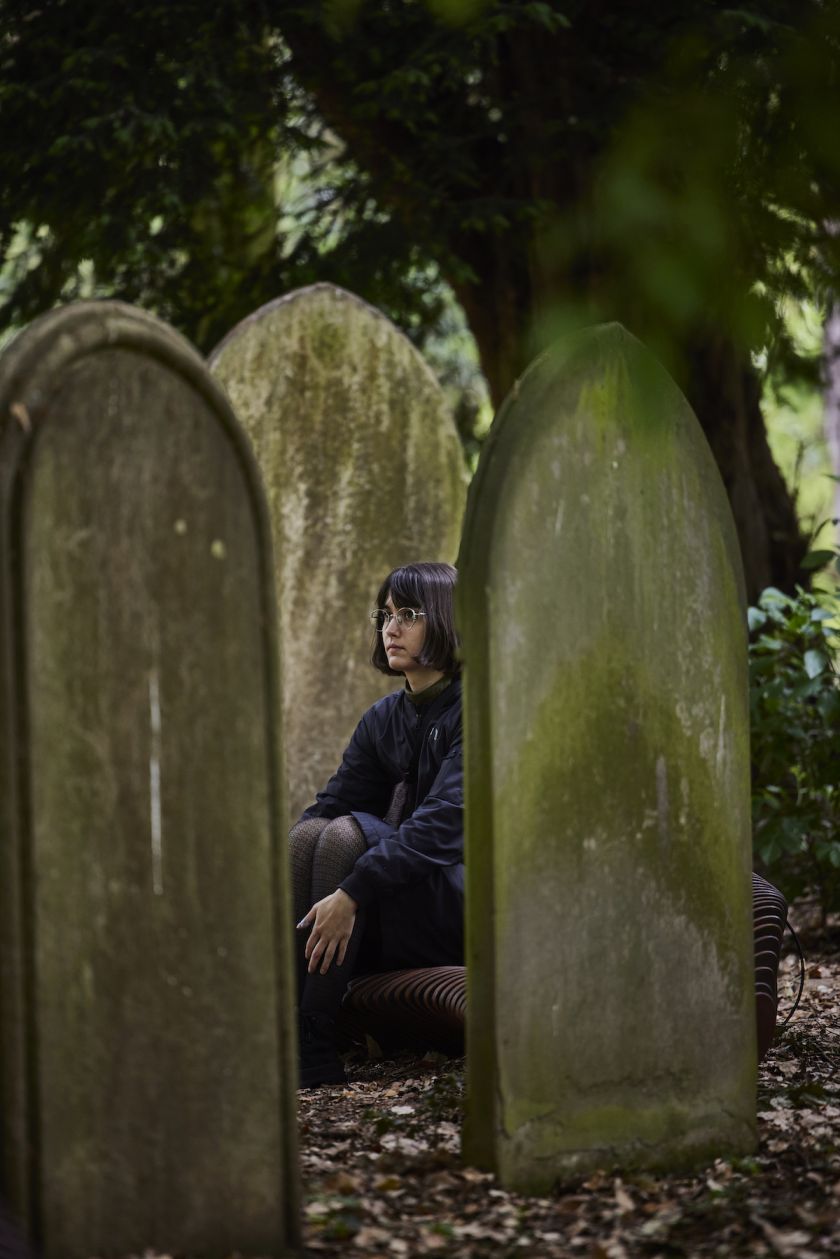 Based out of Hackney Wick, east London, but working with collaborators and clients worldwide, in the decade since it began, has proved itself to be so much more than just a creative studio with a daft name.

Founded in 2012, MLF is now a collective headed up by Barney Steel, Robin McNicholas, and Ersin Han Ersin that bills itself as somewhere “we play, get inspired and produce a diverse glittery slug trail of sensory nuggets.”

The studio is perhaps best known for its pioneering use of technologies like VR, garnering worldwide attention and exhibition space with its first VR piece, In the Eyes of the Animal: a 360º vision of a forest from the perspective of animals and insects. And since then demonstrating its deft knack for merging science, art, and technology in immersive artworks and shows that manage to marry complex themes and tools with a beautifully democratic, egalitarian, and accessible outcome. Its varied past projects have included light displays for Miley Cyrus concerts and a U2 music video, a piece that imagined the forces of a black hole for Nxt Museum in Amsterdam, and collaborations with the Royal Shakespeare Company. 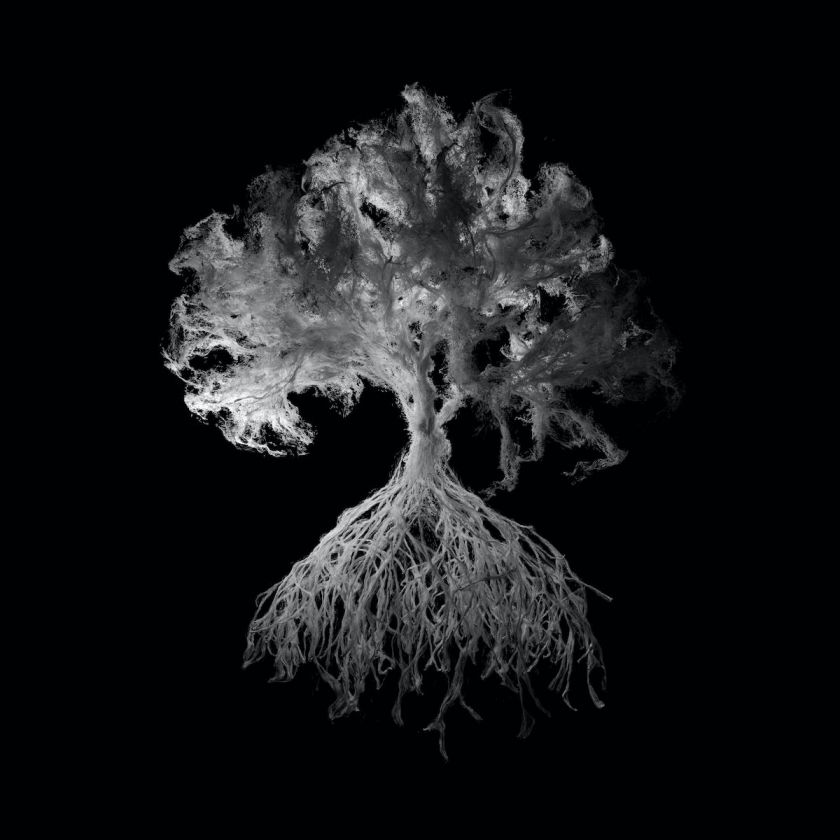 Despite the pandemic, 2021 has been a busy year for the collective: earlier this year, that RSC project came to fruition with a futuristic reimagining of A Midsummer Night’s Dream; and over the summer, MLF brought a stunning tech-augmented exploration of death, trees and fungi to Coventry. We spoke to co-founder Ersin to find out more.

I enjoyed the show in Coventry; it was a very interesting setting and felt like a very approachable way of talking about quite difficult things. How did you find that venue?

It’s been a collaborative process with the city of culture team. The cemetery somehow presented itself very easily because you’ve got interesting ecologies, lots of trees, the arboretum, and very buildings with the two churches that provided magnificent, protected, secure indoor areas where we put more audiovisual, rather than just audio works. We were looking for that kind of outdoor space that can accommodate several different things.

When we first went to the cemetery, there was no single leaf, apart from some of the Evergreen trees – it looked completely different. Very, very grim. Very dark. Cemeteries are quite loaded in our perceptions, but then towards summer, it transformed into this magnificent green backdrop.

The themes are not new to us: the cycle of life or invisible connections between humans and more than humans. 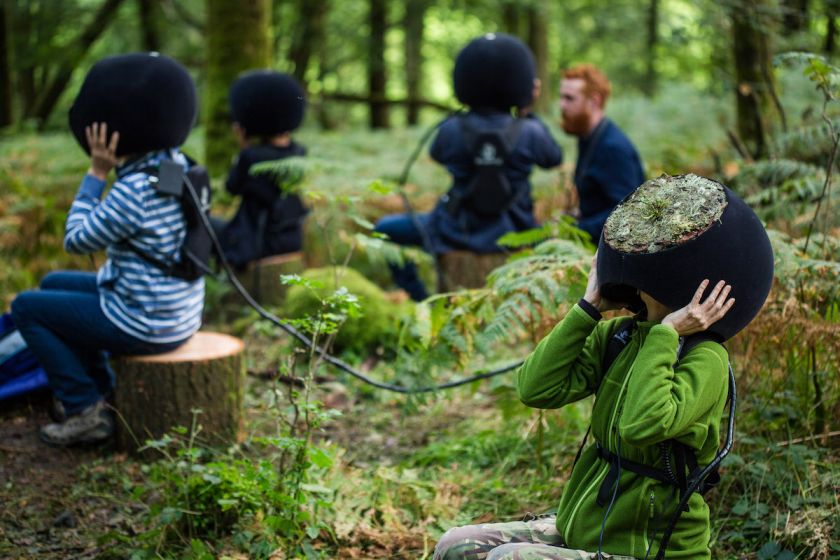 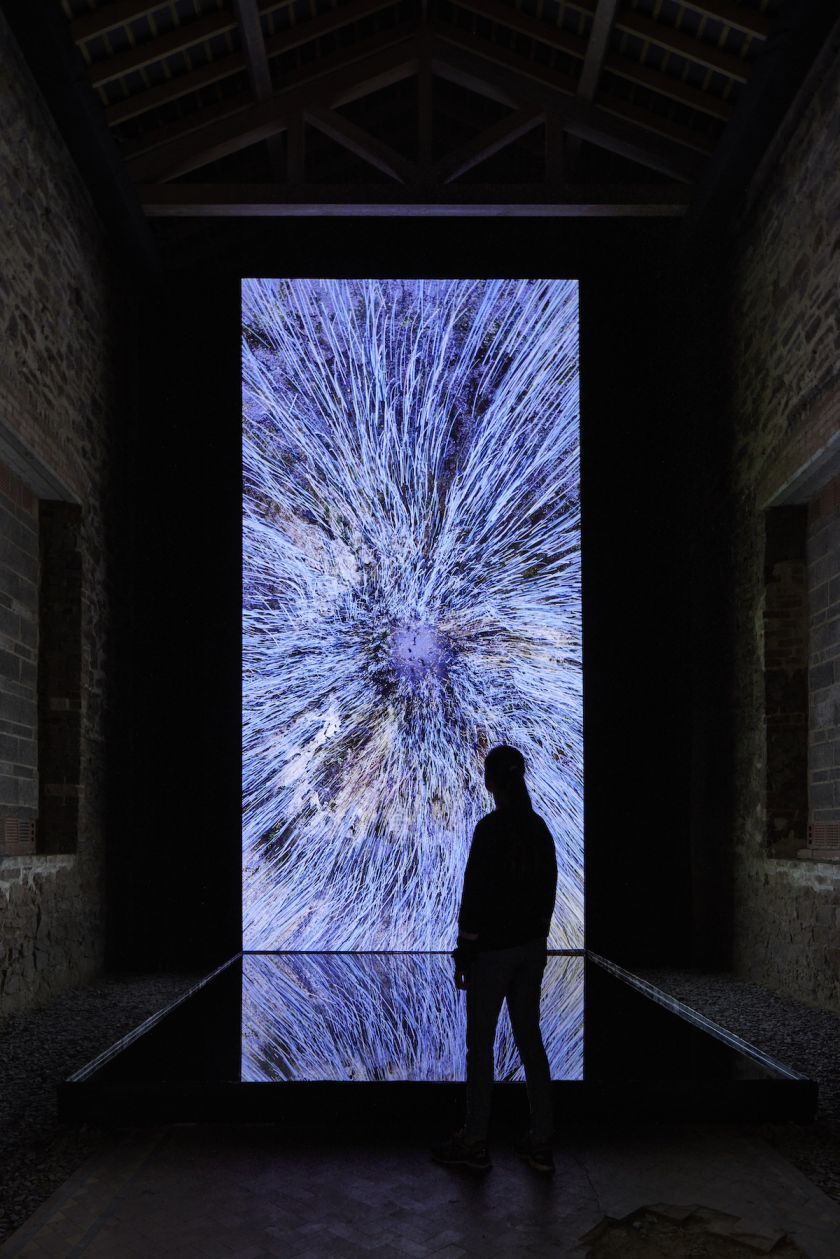 Marshmallow Laser Feast Observations On Being, Coventry City of Culture 2021 Installation image of We Live in an Ocean of Air Video Edition Photo by David Levene

Can you tell me a bit more about your interest in bringing together technology and natural elements or forest-like spaces?

The old modernist ideas around technology are that it’s divorcing ourselves from nature. But now, we’ve got to a point where we’ve begun to use those technologies to help us understand our positioning in space. The question is, what we are doing here? And that can be solved with emerging technologies, with science.

In 2015, we worked on a project called In The Eyes of the Animal that used technology to unlock something beyond the limits of humans. That allowed us to combine virtual reality, some emerging technologies, things like architectural tools to capture a space. Then we worked with scientists to understand how a mosquito or a dragonfly can experience various things with a completely different set of sensory features.

We’re trying to make the technology as invisible as possible, to do its purpose, but nothing more. Technology is this incredible enabler for exploring worlds beyond the limits of human senses, and what is it like to be human and more than human. 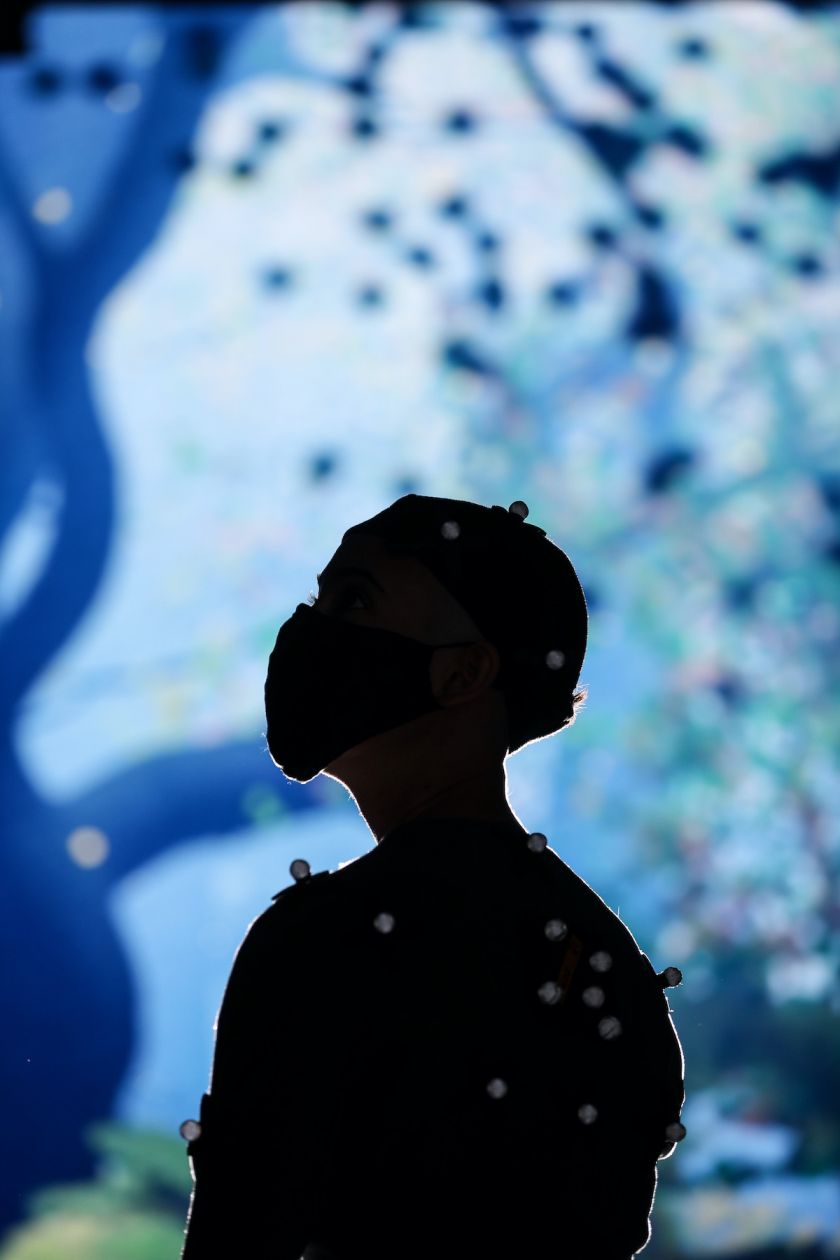 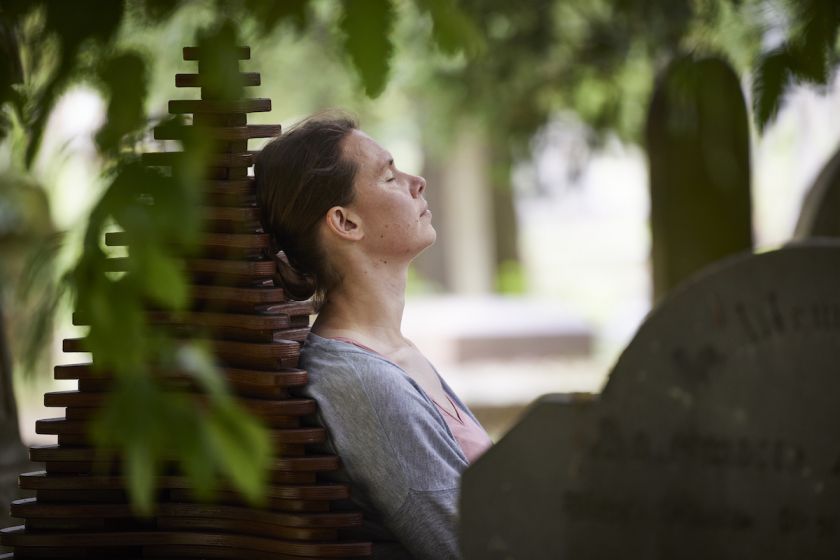 What did you hope that people would take away from seeing Observations on Being?

One of them is that next time you go to a park, without any of the audiovisuals or art, you see that invisible connection—you exhale, inhale, you’re living because of weather. That would be the very basic bottom line of what I would say is a successful art intervention.

We’ve got a tendency to not talk about death. There’s such a stigma around it, but in a time like Covid-19, it’s so close and real for all of us. I think it presents a way of discussing those things and the continuation of life in various forms. That’s why you can’t talk about mycelium and the incredible network that they present without talking about decomposition. They’re the providers of this amazing cycle of life. We manifest ourselves in various forms; we are shape-shifting… we want people to feel a little closer to those themes. 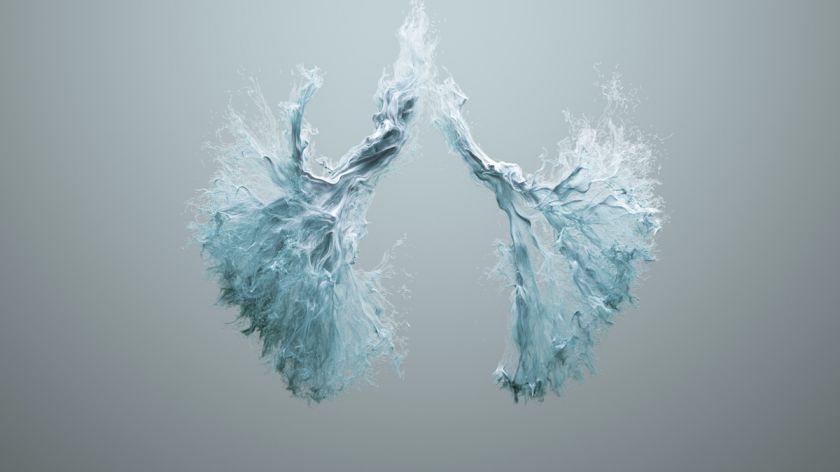 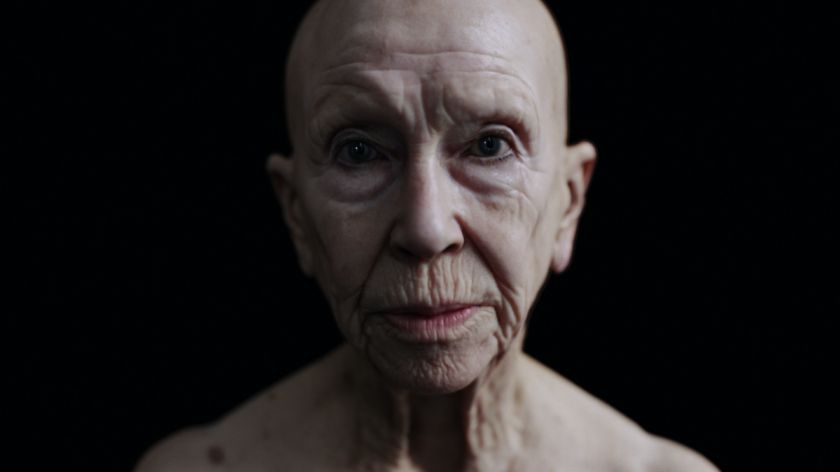 Can you tell me more about the Midsummer Night’s Dream project with the Royal Shakespeare Company?

It was a modern technology-created version of Midsummer Night’s Dream, and initially, the project was a collaboration between several partners. It had been in production for a while, and we were aiming to create something that takes place in Stratford upon Avon that then goes out into the street in nature, and people follow the journey starting from inside out, as well as other visitors joining online.

But then, because all this [the pandemic] happened, the whole plan had to be reconsidered. Luckily we already had some of the due diligence and the infrastructure to create a show that could be experienced remotely. So we fully focused our attention on creating a show that can be seen anywhere in the world through any device, from your browser to your phone. You can choose to experience it as an interactive user, or you can just have a contemplative experience.

It was a bit of a different experience or a new take on A Midsummer Night’s Dream. There were live actors and cameras that tracked what they were doing on the stage with motion capture to give the idea of human connection.

We got some satisfying feedback; around 90 different countries around the world connected. I think 7000 people saw it in total. 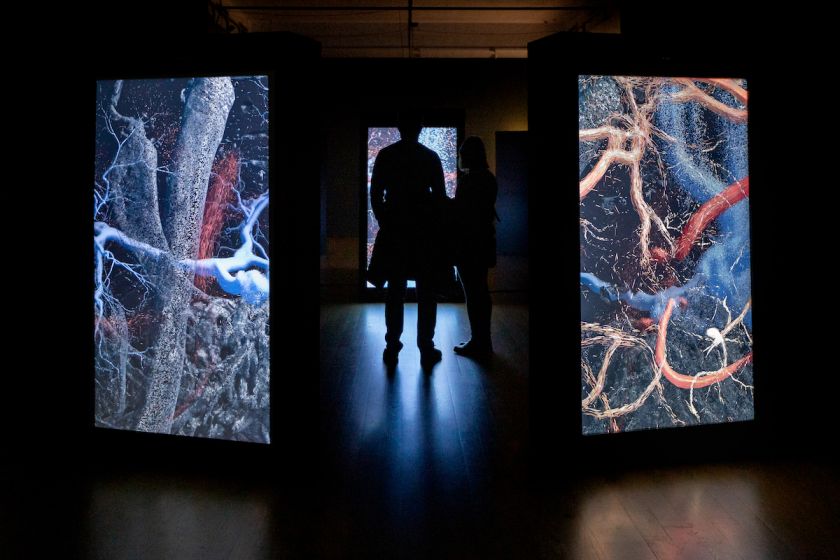 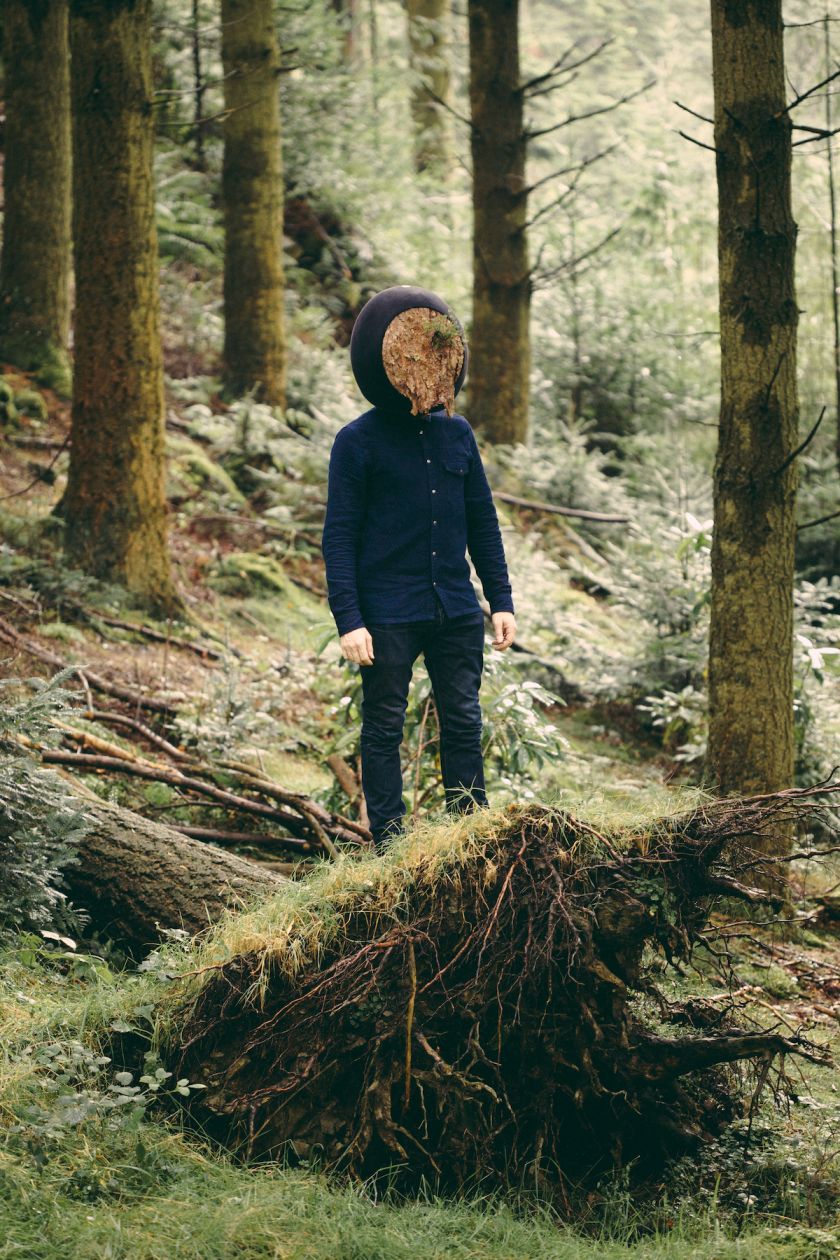 Was there any kind of trepidation in working with a text that’s so storied and so well known, which a lot of people have so much attachment with?

Yeah, I think we were lucky; throughout the process, the artistic director of the Royal Shakespeare Company was also involved. So it was a journey that we did together, and they all got to know their audience so well. There are parts that shouldn’t be taken down or changed, and there are other parts… Shakespeare was incredibly inventive for his time, and I think we got to a place where, if he would leave alive now, it’s what would he do. We agreed on those kinds of principles.

Having specialised in technologies like AR and VR for a long time, are there any particular trends you’ve noticed in those areas over the years?

VR, and especially AR, are so widely adopted now. They’d never really got so much attention until the Oculus Rift, which was a very, very accessible, affordable VR headset that led to today’s kind of Metaverse revolution. But this is not unexpected because you can trace each of those trends back to the development of microprocessors, smartphones, social media. It’s quite magnificent to see VR used so much in spaces like galleries and biennials: almost all creative industries and beyond are claiming ownership over the future of VR and AR, and that just shows how they stimulate the imagination of all those different fields and how important they will become over time as we find more meaningful use cases.

As for how it’s being used by giant corporations, they need to remind themselves about the person who’s benefiting from it. Is it accessible across the board, or are we just playing with the technology that is very inaccessible and not solving any of the problems, just creating more?

There are basic ethical questions that we always talk about when we’re creating projects involving these things. 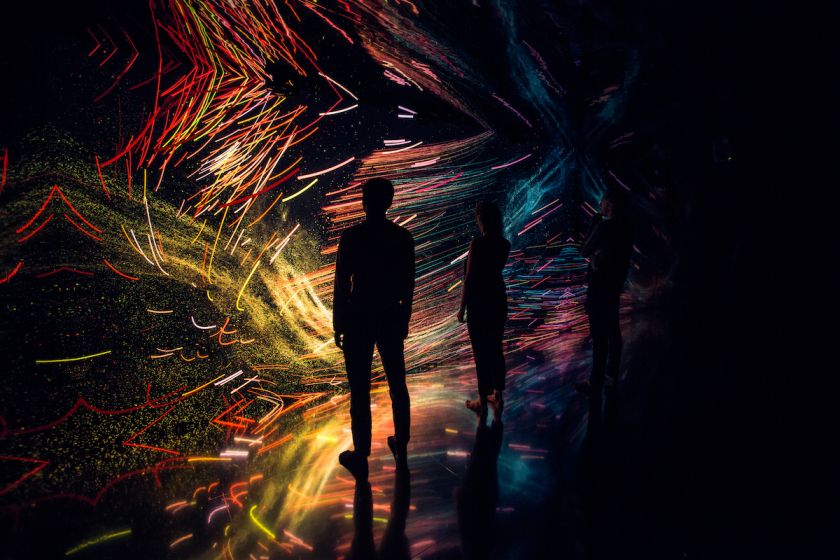 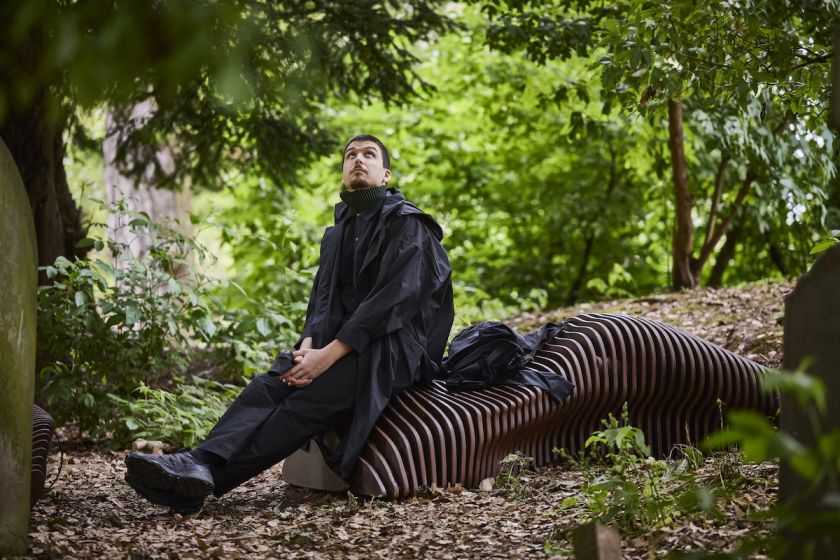 Can you tell me more about what you mean by that?

I think the social media example is a very good one. We didn’t know that we were exchanging privacy for a free service to connect with our elementary school friends at first. And now we know that we gave up on our privacy to get that.

The same goes for virtual reality and augmented reality; those are embedded devices. The game for them is to become almost invisible. That includes your goggles, glasses or lenses, potentially, a device that is embedded in your body that can already understand your political inclination, your health condition, and the way you move because of all the sensors that allow you to use it and update your brain. There’s also useful information that you can extract from it. The kind of behavioural manipulation is so grand that I think as a kind of practitioner in that field, I feel obliged, almost a responsibility to communicate that part so that when we are consuming this content and engaging with those technologies, we’re aware of all potential.

Then, we can form a public opinion around those things and, therefore, create meaningful content that can enrich our lives and make our connection with the world better. In the wake of climate catastrophes and the Anthropocene, this is extremely important. So, let’s not be part of the problem—let’s somehow highlight some of the potential problems that are coming up and communicate them by doing meaningful work. 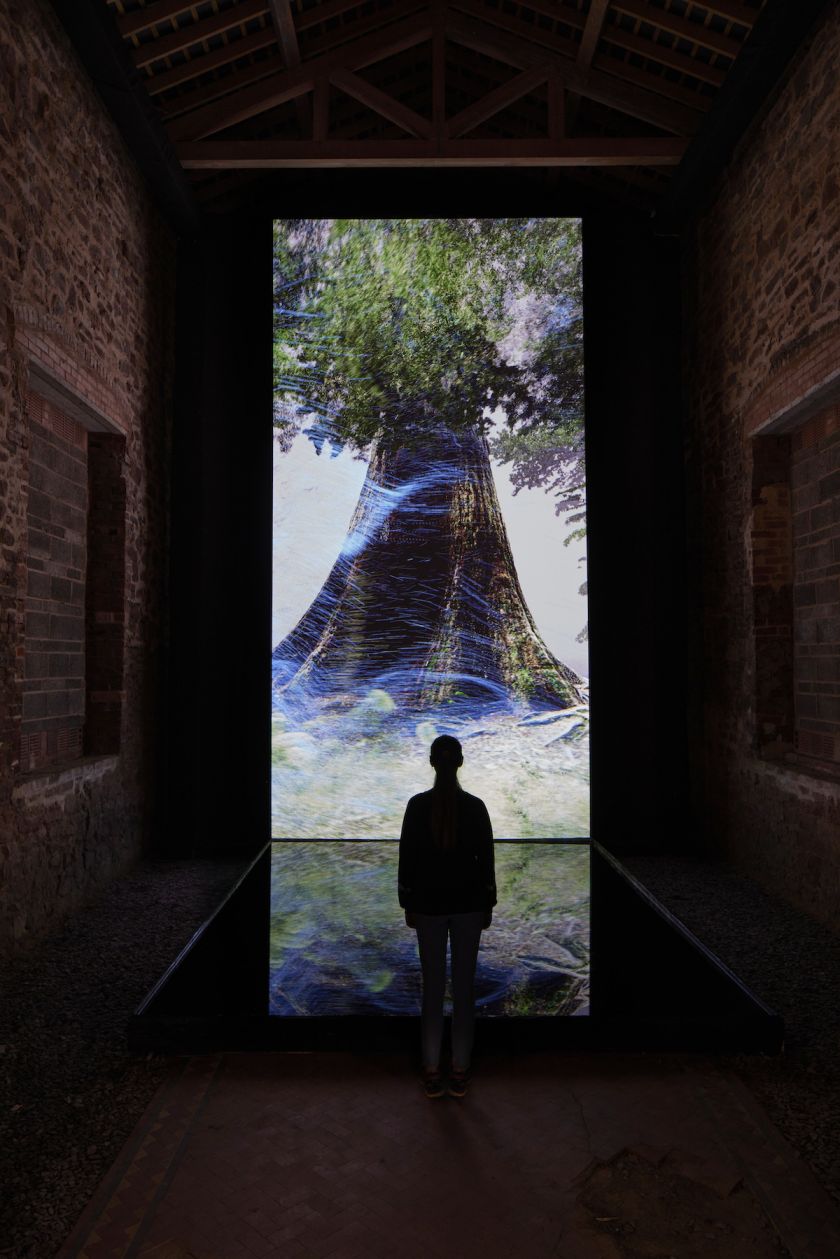 Marshmallow Laser Feast Observations On Being, Coventry City of Culture 2021 Installation image of We Live in an Ocean of Air Video Edition Photo by David Levene