“The Biggest Mistake Of Humanity”: 18 Drawings By Ukrainian Artist Created Since The Start Of The War In Ukraine

Artist and illustrator Olga Wilson has shared “war notes” through the drawings she made to illustrate the horrors happening in her motherland Ukraine. On her social media, Olga is actively encouraging people to help the victims of the war and support the volunteers.

In her drawings, Olga honors victims of war in the most fragile yet beautiful way by turning their stories into art. In her , Olga defined war as “the worst mistake.” The innocent people, including children, pay the price for war.

Take a look at the heartbreaking drawings of this Ukrainian artist, who managed to capture the futility of war. 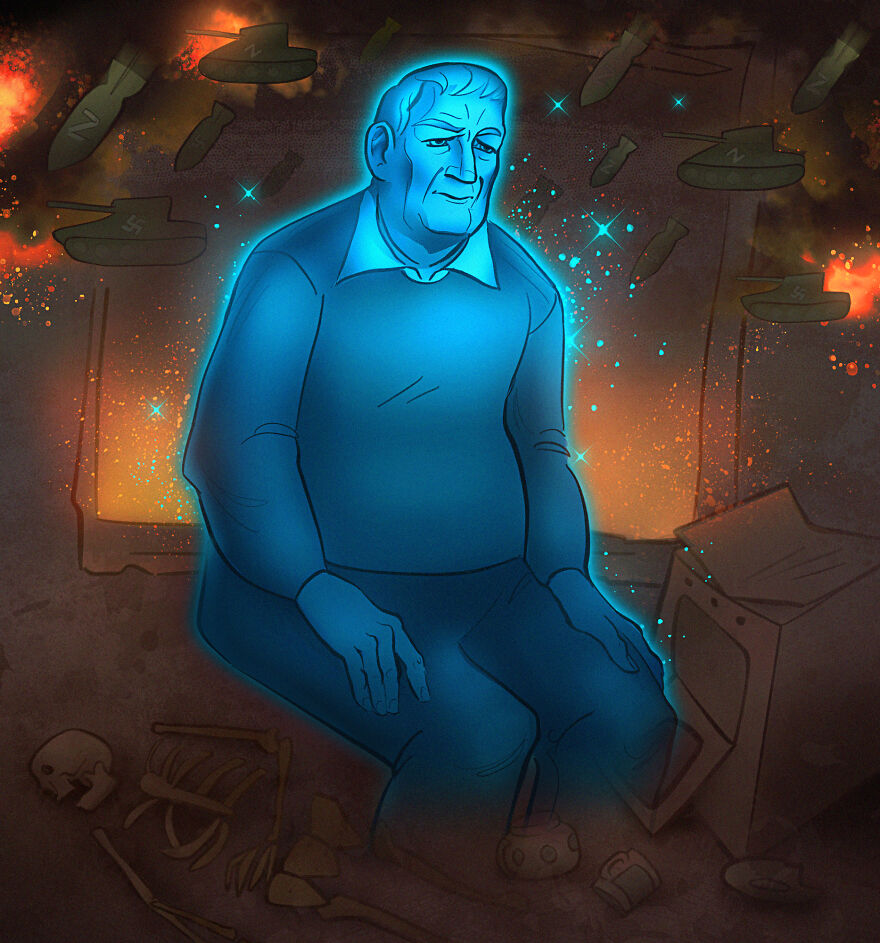 “Historian, Jens-Kristian Wagner, published on his page on Twitter a note about the death of 96 y.o. Boris Romanchenko.

Boris Romanchenko was a prisoner in fascist concentration camps and survived Buchenwald, Peenemünde, Mittelbau-Dora and Bergen-Belsen. But he didn’t survive after a bomb shelling by the Russian army.

After the bombing of his apartment in Kharkiv, only his bones and ashes were found. In 2012, Boris Romanchenko read Buchenwald’s oath “to create a new world where peace and freedom reign” during the celebration of the anniversary of the liberation of the Buchenwald concentration camp.” 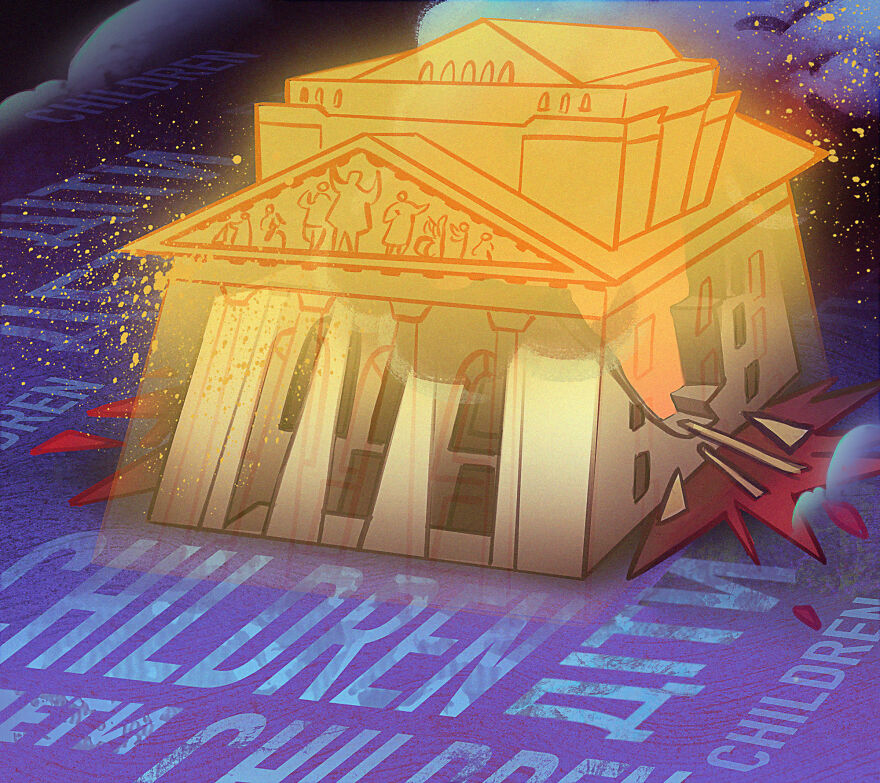 “On the afternoon of 16 March, Russian aircraft dropped a super-powerful bomb on a drama theater in the center of Mariupol.

About a thousand residents were living there and were using it as a bomb shelter. Satellite images clearly show that in front and behind the building there were made big white signs in capital letters “CHILDREN” for aviation pilots to avoid this place.” 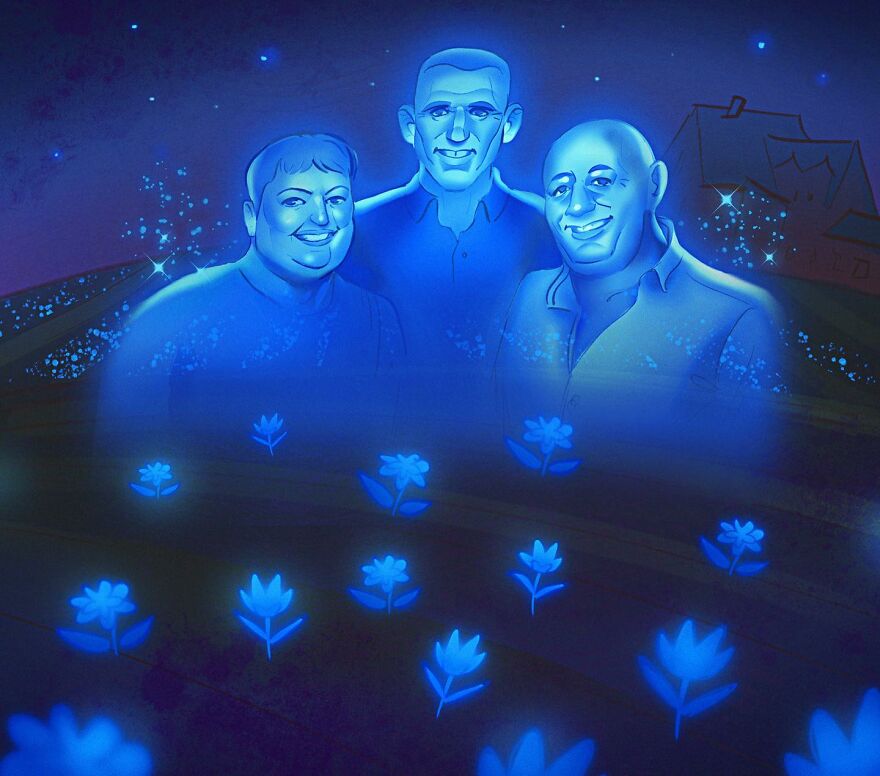 “On April 7, in the village of Motyzhyn, Bucha district, Kyiv region, the village head Olha Sukhenko, her husband Ihor and son Olexandr, who were killed by the Russian military, were buried.

Olga, her husband and her son were found tortured to death by the Russian military.

May their souls rest in peace…” 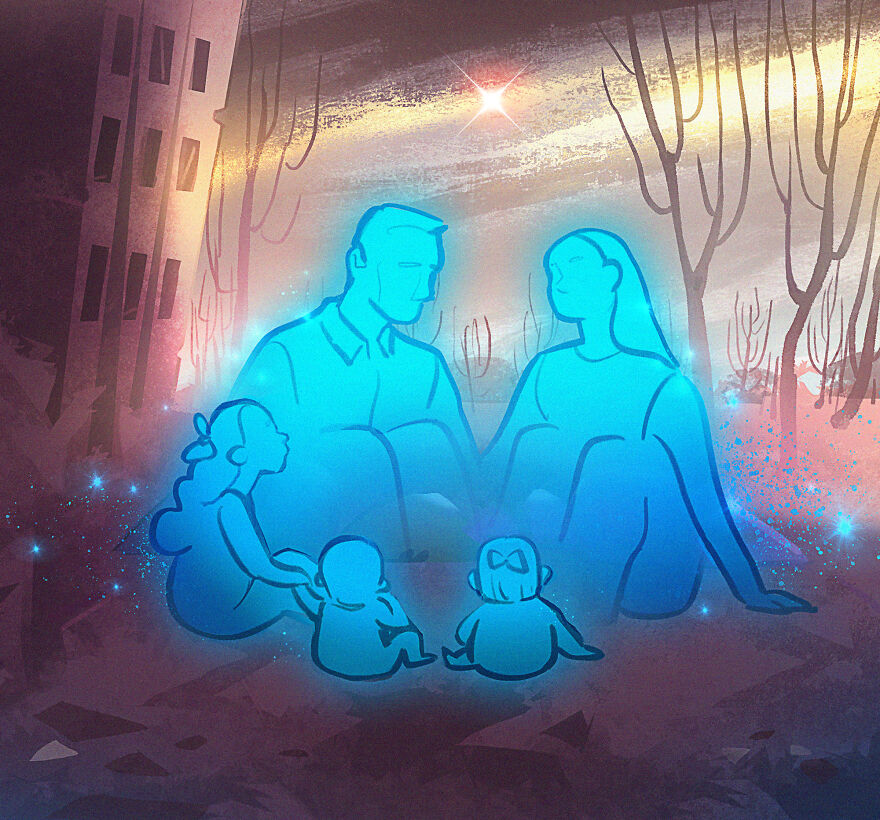 “In Chernihiv, a family of 5 people died due to an airstrike. March 17, 2022. Not a single family will be forgotten.” 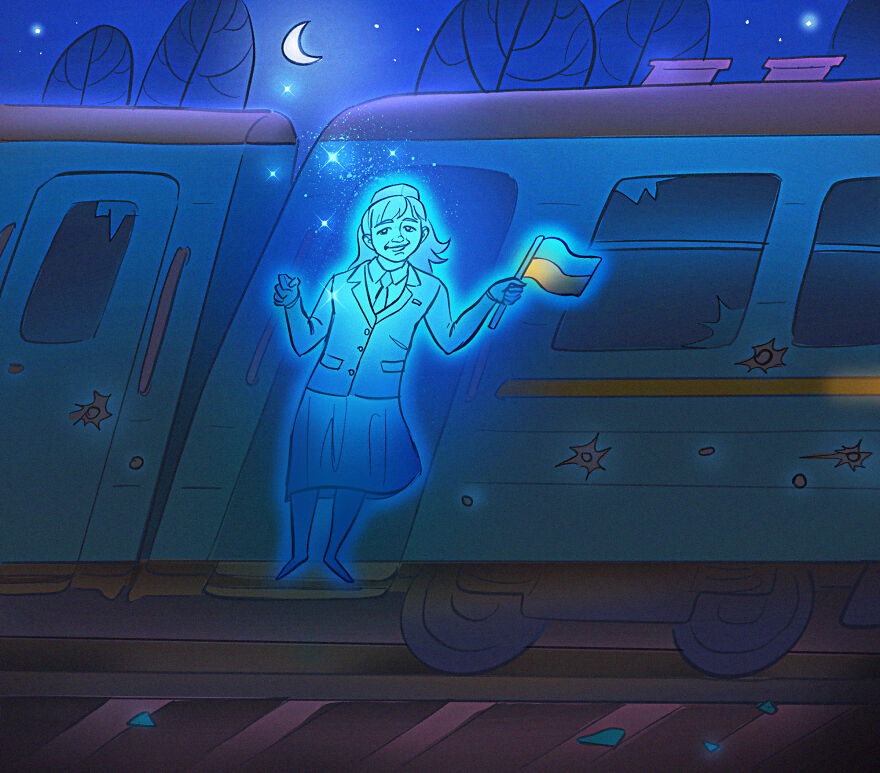 For two weeks, her evacuation train rescued people from all over Ukraine. It came under fire when it was going to Lyman to pick up a group of children. Natalia died of shrapnel. She was 48 years old. Her daughter says she wants to be as brave as her mother.” 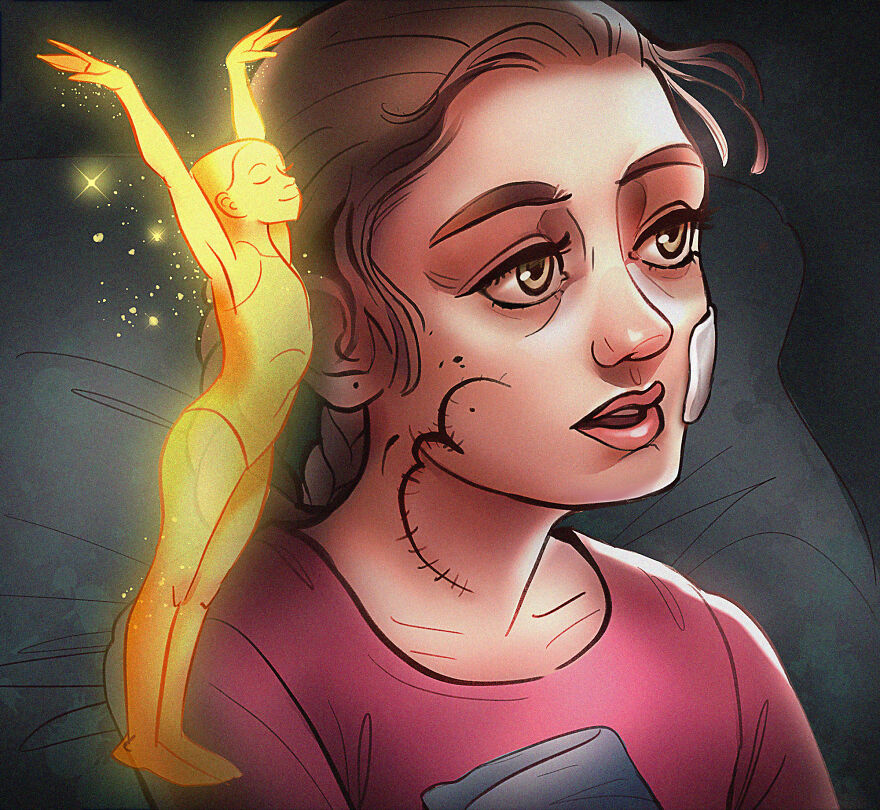 “In Mariupol, a Russian occupant shot in the face of an 11-year-old girl. The bullet passed through the jaw and injured the root of the tongue. Currently, Milena Uralova is in the hospital with her mother. She is recovering but is still very nervous and afraid of every sound. Milena dreamed of becoming a professional gymnast.” 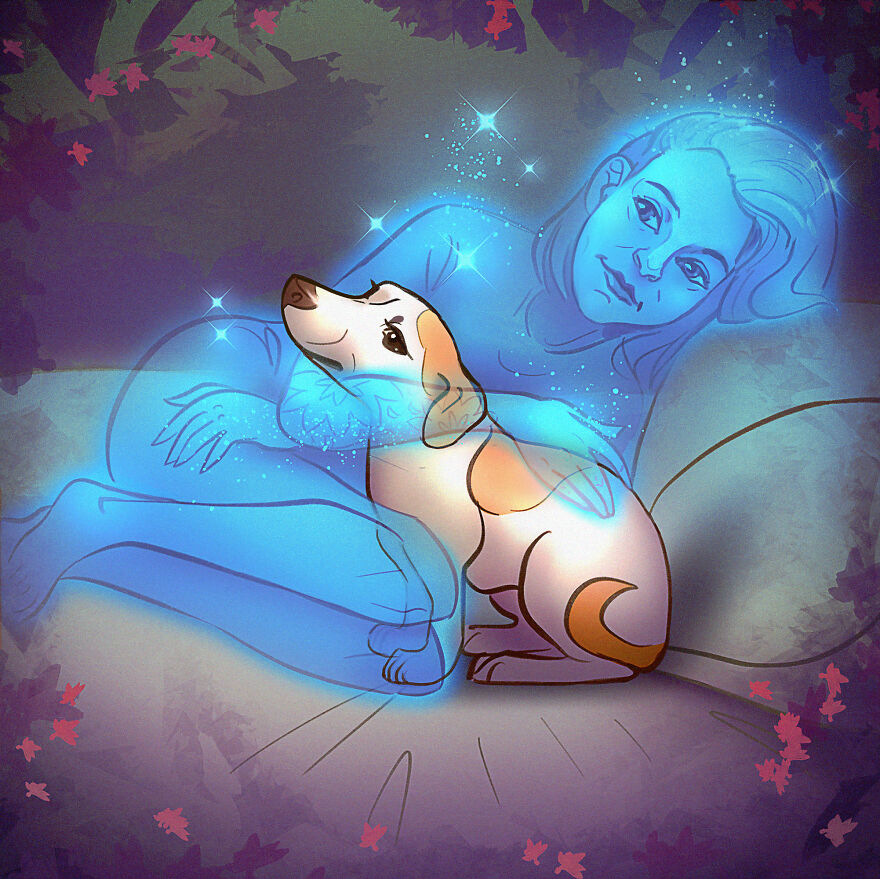 “Anastasia Yalanskaya’s life ended on the 10th day of the war – March 4 in Bucha. Nastya and her two friends were shot by occupiers right in a car while returning from the dog shelter, where food for dogs was brought.” 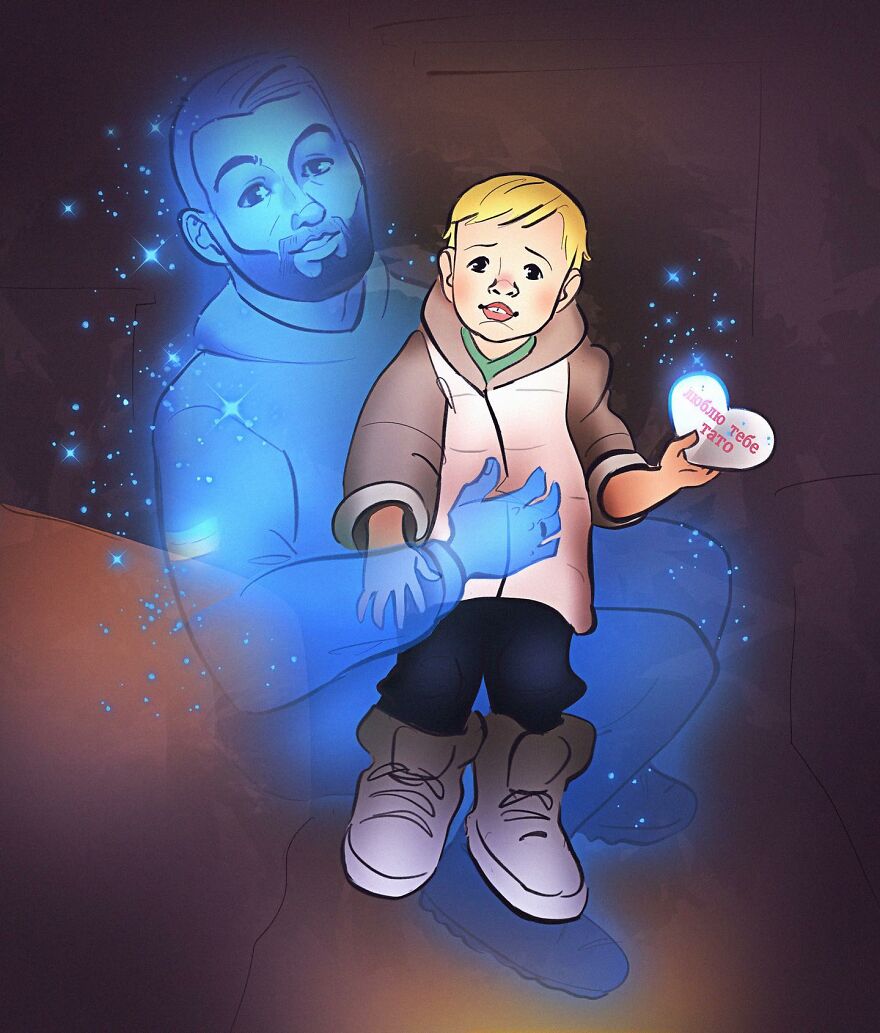 “Krasnobryzh Igor Vitaliyovych died defending his hometown Mariupol, where he was born and where he lived.” 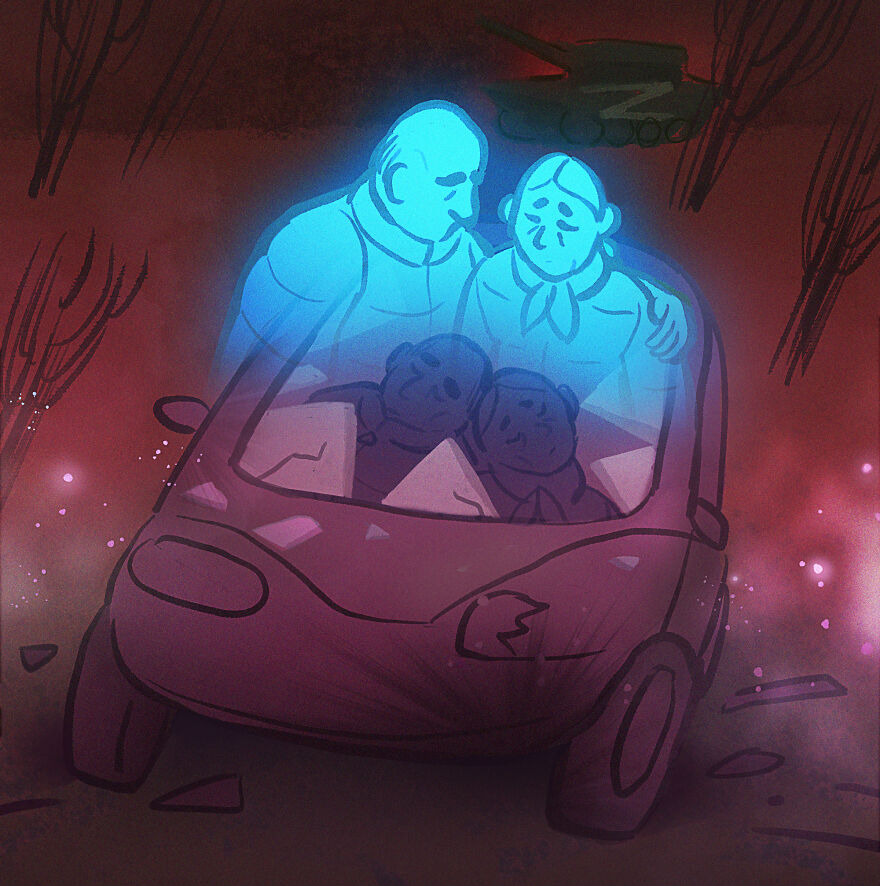 “On February 28, 2022, near Makariv village, a Russian fighting vehicle fired a burgundy Daewoo Lanos from a 30-mm cannon. An elderly couple was in that car…” 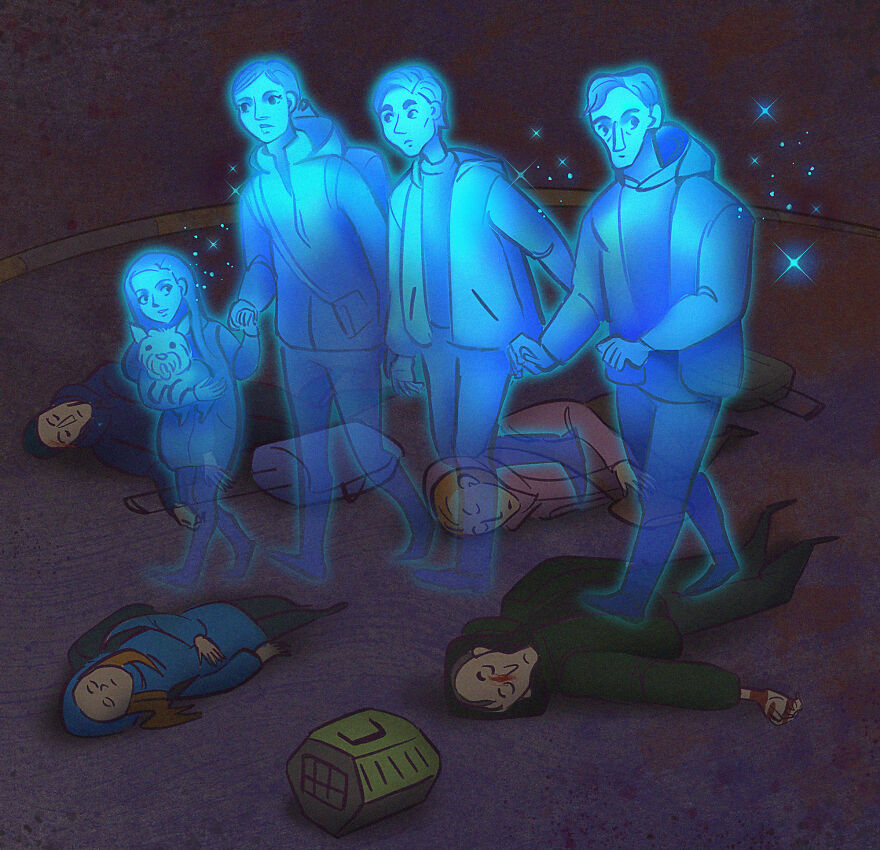 “On March 6 a family of mother, boy and girl died from mortar shelling near Irpin, while trying to reach evacuation buses. Father, Sergiy Perebyinis, recognized the tragedy from photographs in news.

A 26-year-old volunteer died as well while helping to carry a bag. Father gave an interview, which was published in The New York Times. In the year 2014, the Perebyinis family had already evacuated from Donetsk, which was occupied by Russian soldiers. A family moved to the Kyiv region to start a new life…” 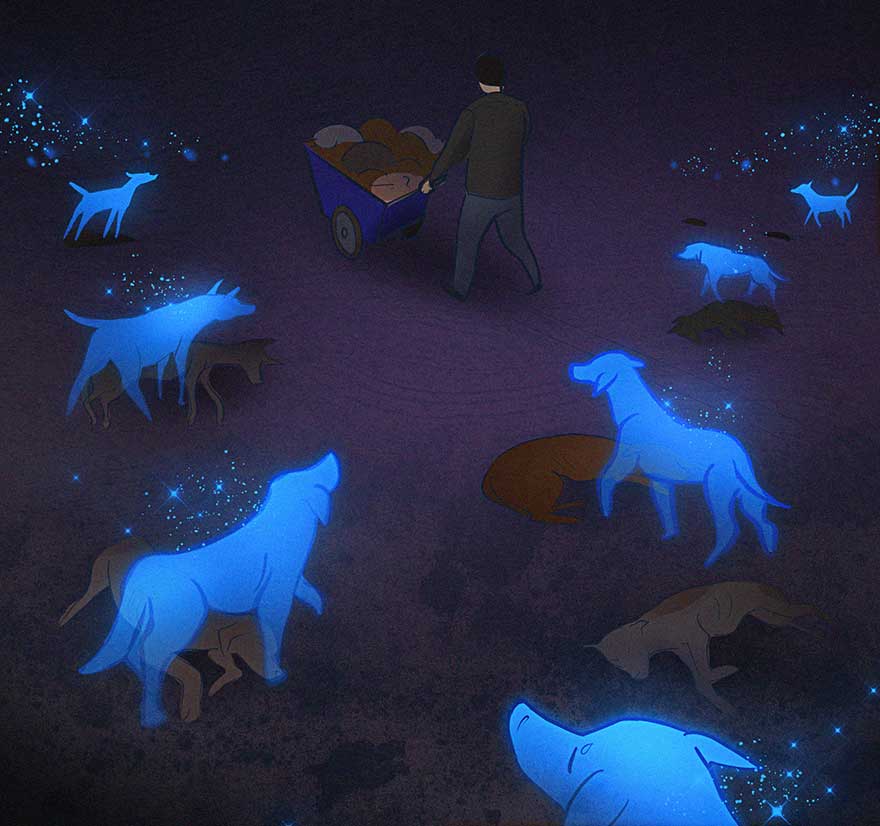 “Every living being is a sufferer of war. Animals in shelters and farms in occupied territories are massively dying from lack of food and water or after shelling. I watched a terrible video recorded in Borodyanka. Volunteers found only around 150 animals who survived out of 485.” 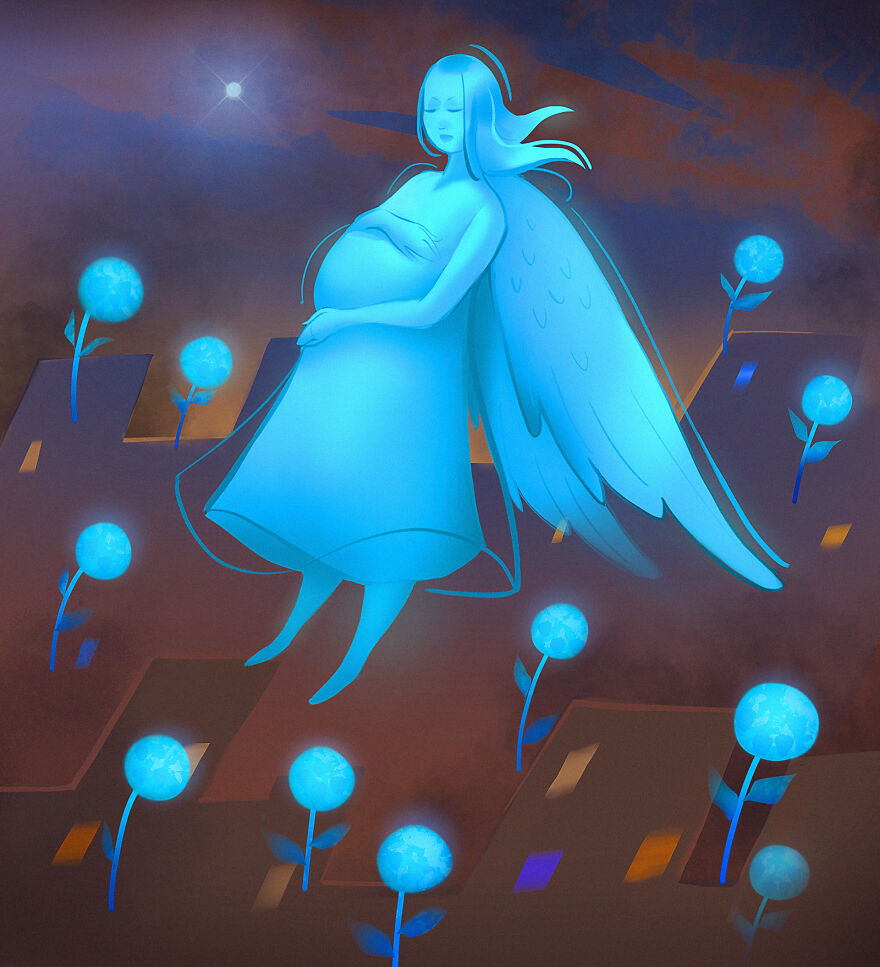 “14.03.22 there was information about the death of a pregnant woman in Mariupol after the missile hit the maternity hospital.

She had a separation of the right thigh, caesarean section doesn’t save her child… I would like to dedicate this small art to this mother and other women, who were forced to suffer from war.” 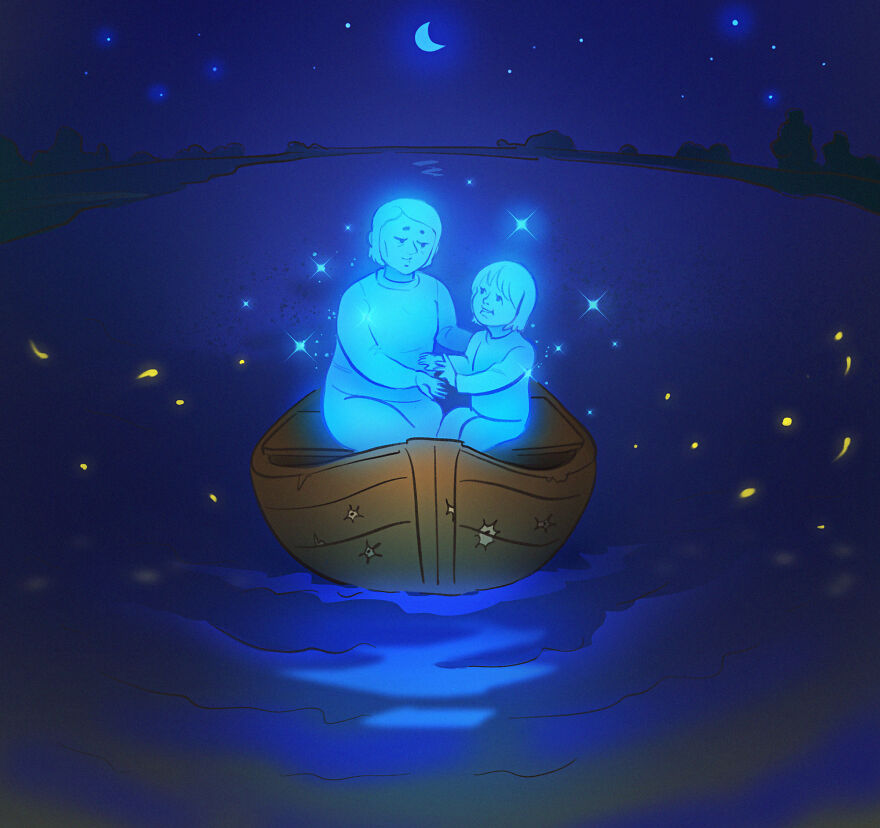 “On April 5 it was officially declared about the death of a boy Sasha. Many people joined to search for him, as they hoped to find him.

Sasha and his grandmother fled from the occupied Vyshhorod district. The boat capsized, and grandmother and other people in it died. A child was in a life jacket, but he couldn’t be found for a long time. Three weeks later, the body was found. Sasha’s mother Anna wrote about that on her Instagram.” 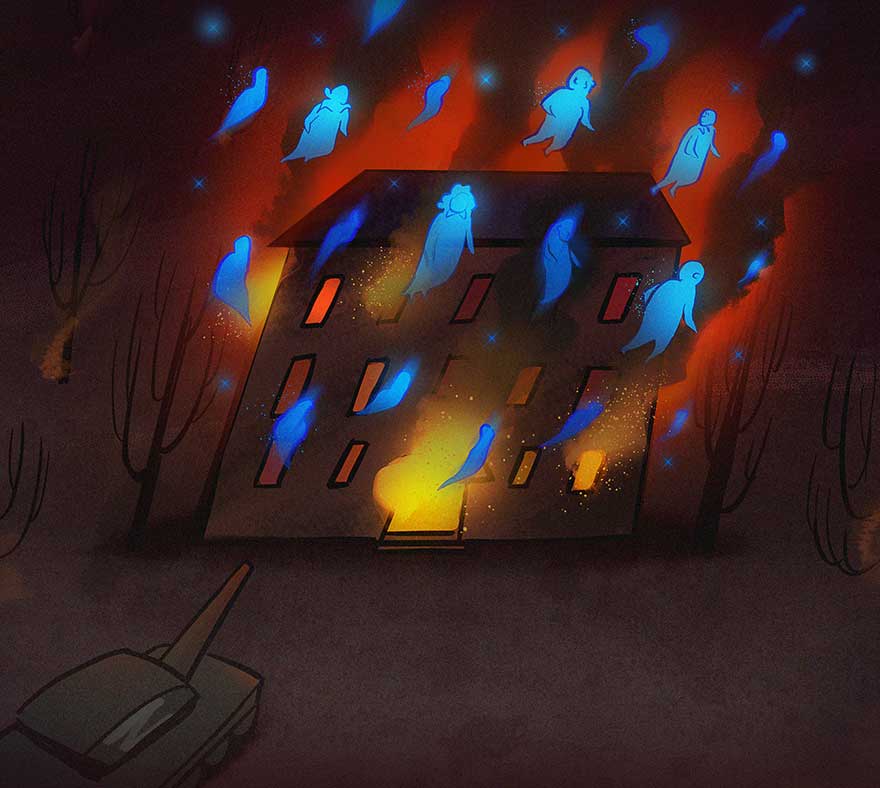 “The head of the Luhansk regional military administration, Serhiy Haidai, made a short report.

On March 11, Russian occupiers fired from a tank at a nursing home in Kreminna. They put a panzer in front of the house and started firing. Those who lived till old age in this house – 56 people died on the spot. 15 people who survived were abducted by the occupiers and taken to the occupied territories.” 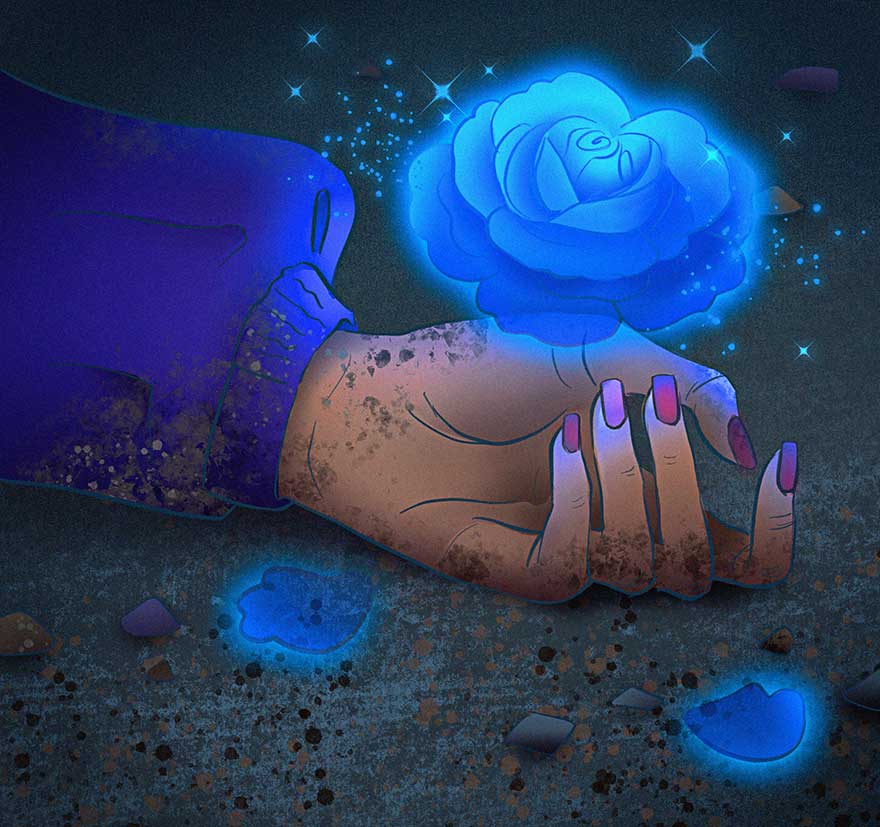 “Bucha… Our hearts are shattered into thousands of pieces. The beautiful hand belongs to Iryna Folkina. We won’t forget.” 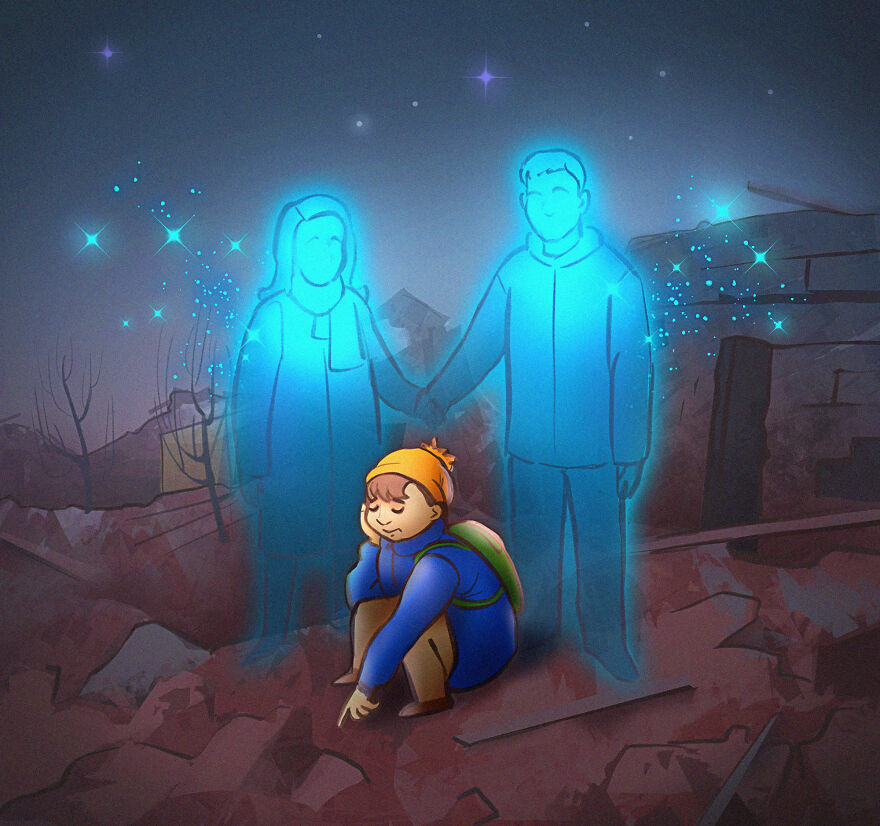 “From the very beginning of the war, we come across horrible stories about when children are left alone. What to do if a child is lost and you want to temporarily provide shelter? The Office of the President of Ukraine together with UNICEF and the Ministry of Social Policy has created a chatbot for a telegram: @dytyna_ne_sama_bot

It can be reached from abroad as well.” 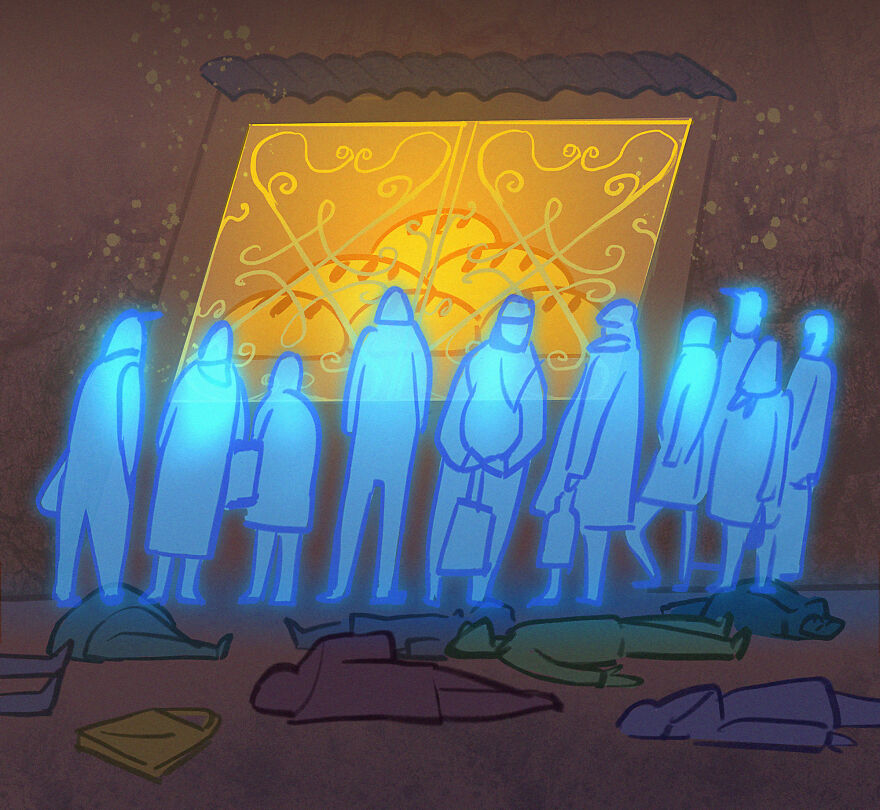 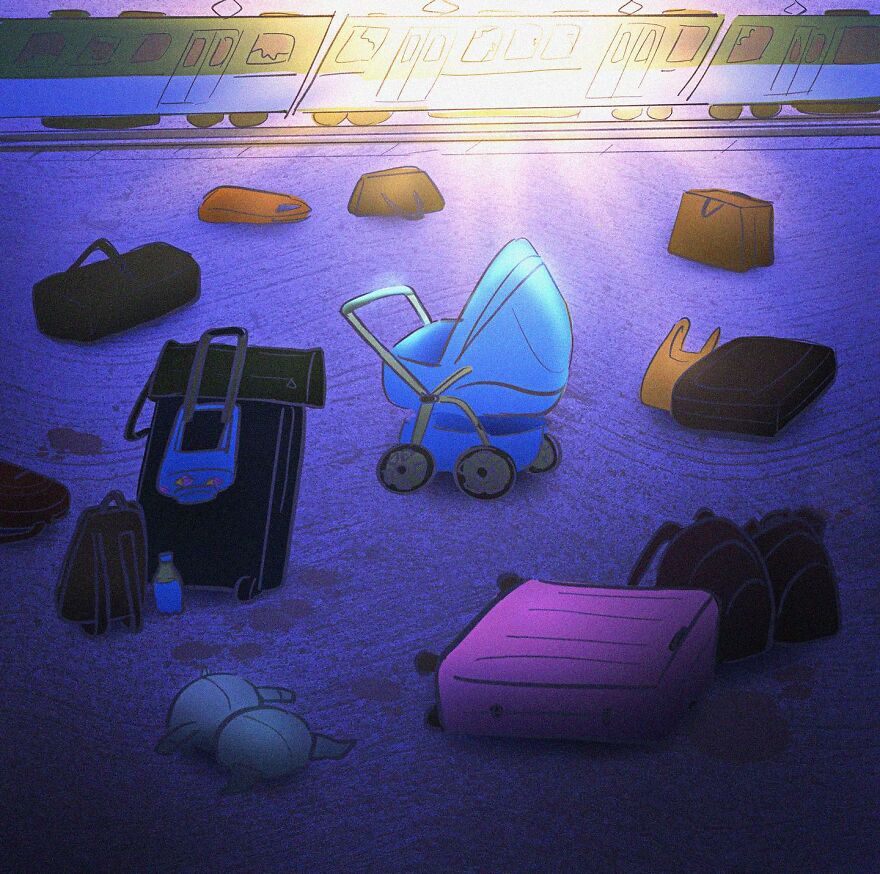 “Russia fired missiles at the Kramatorsk railway station. According to the authorities of the region, as of 17:00, it is known about 50 were dead (5 children) and almost a hundred were wounded.”