It goes without saying, not every great studio or creative professional is based in London. But sometimes, to look at what’s been shared or shouted about, you’d think the capital was the centre of the universe. Sure, it’s a hub. But there is plenty of talent across the rest of the UK, too. Now a new directory by is doing something to champion creatives outside of London.

Called , it’s a free resource created by Craig Oldham and Alice Fraser that allows a creative individual, studio, agency, organisation or type foundry to get themselves listed for free. Its mission is to “demonstrate the wealth of talent truly available around the UK and not just in the capital city”. Over 1,100 have signed up so far and hundreds more are awaiting approval, as there’s a vetting system in place to ensure legitimacy.

From in Cambridge to Leicester-based design studio, , there is an array of creative people and businesses in different disciplines including design, illustration, marketing, publishing, photography, production, architecture, and everything in between.

“It’s a joint venture that came out of a mutual frustration for this idea that if you want to be successful in the creative industries, then you have to go to London,” says Alice, as we sit down for a coffee together in , a new co-working and office space in Manchester that has so far welcomed Office Of Craig, Studio DBD, Ellen Ling, Tess Sweeney, and Jane Bowyer.

Alice says it was at university when she first realised this industry bias. She went to Sheffield Hallam and loved it, so isn’t pointing any fingers. She says it’s more of the belief that hangs in the air – one she and Craig hope to dispel. “I suppose it’s like Dick Whittington who went to London to find his fortune. It’s something we’re told through studio visits, lectures, and famous brands that everyone knows of… At university, I could list 10 agencies in London but only one in Manchester. There’s something not right here. Something has to change.”

As we sit amongst the exposed red-bricked walls of Manchester’s coolest new space, overlooking the stunning Kimpton hotel and Oxford Road station, listening to Boards of Canada, us two local girls don’t need much convincing that there is life and creativity outside of the capital. Alice is keen to stress that the directory isn’t a negative thing. “It isn’t anti-London,” she says. “We’re not saying it’s a bad place to be. If you want to go there, that’s great. I think it’s just important to open people’s eyes and show that there are alternatives.”

And that’s because she believes there’s no centre for creativity. “There’s no one point where the magic happens. It’s happening all over,” she continues. And the feedback and listings they’ve had so far only cement that belief. “You go on these studio websites and see so much amazing work, it’s incredible. There is so much talent beyond London.”

Alice adds: “This isn’t something that’s come out of anger. It’s not an ‘us and them’ type thing. It’s providing validity for other people outside of the capital. And we’re excited to see how it develops.”

Plans for The Outside Directory are still bubbling away. “Our hope is that it becomes an integral resource for future generations and emerging creatives,” says Alice. “For students, school leavers and grads especially, it will help them to see what’s local. And for local businesses, they can start to champion and hire creatives on their own doorstep.”

Long-term, Alice and Craig plan to create content around those listed in the directory, perhaps beginning with a newsletter and social channels. “It’s all very new and so we’re still trying to figure out what it might become,” she says.

One of the key features of the directory’s success so far is how Craig and Alice recognised the need to “get out of their own bubble” and so they reached out to the industry, asking if anyone wanted to help pull the directory together. Over a hundred people replied, becoming ‘founding contributors’.

“We shared a Google Sheets document and made this available to everyone who contacted us, each one then added all the local creative businesses and people in their own towns and cities. We couldn’t have done it without them,” Alice explains. 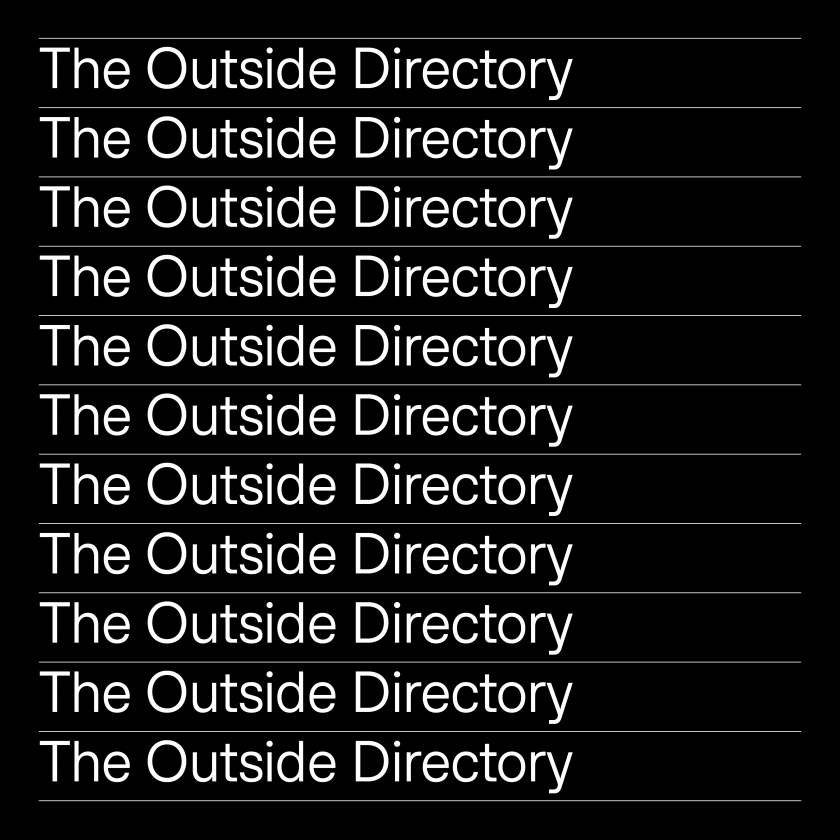 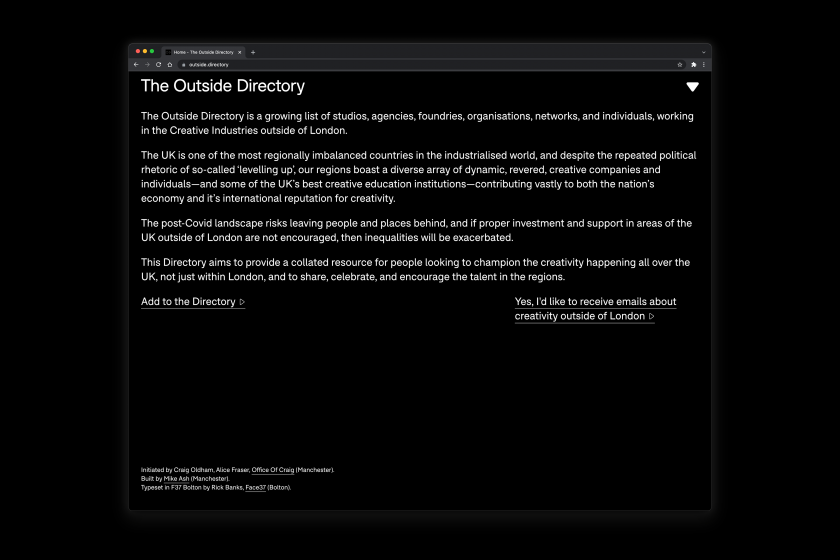 For now, The Outside Directory is only accepting freelancers who have their own direct clients. Freelancers who solely work for agencies are not included. It’s why Alice and Craig are considering launching a separate directory specifically for these sole traders. “They’re a completely different kettle of fish and need a dedicated platform, specifically for their needs,” says Alice.

There are lots more ideas in the making, but it’s early days. In future, the pair hope to also raise important topics in the creative industries like the barriers many people face to entry, as well as diversity and inclusion. Overall, Alice hopes it becomes a champion for creatives everywhere.

“You shouldn’t have to explain why you don’t want to go to London,” she says. “There are many reasons why you might not want to live and work there. You may want to stay near family. Or your local football team. Or friends. Career isn’t everything. Besides, creativity isn’t tied to your location. If anything, your location influences your creativity.”

The Outside Directory is completely open for anyone to contribute via the completion of a simple form. To find out more, go to .