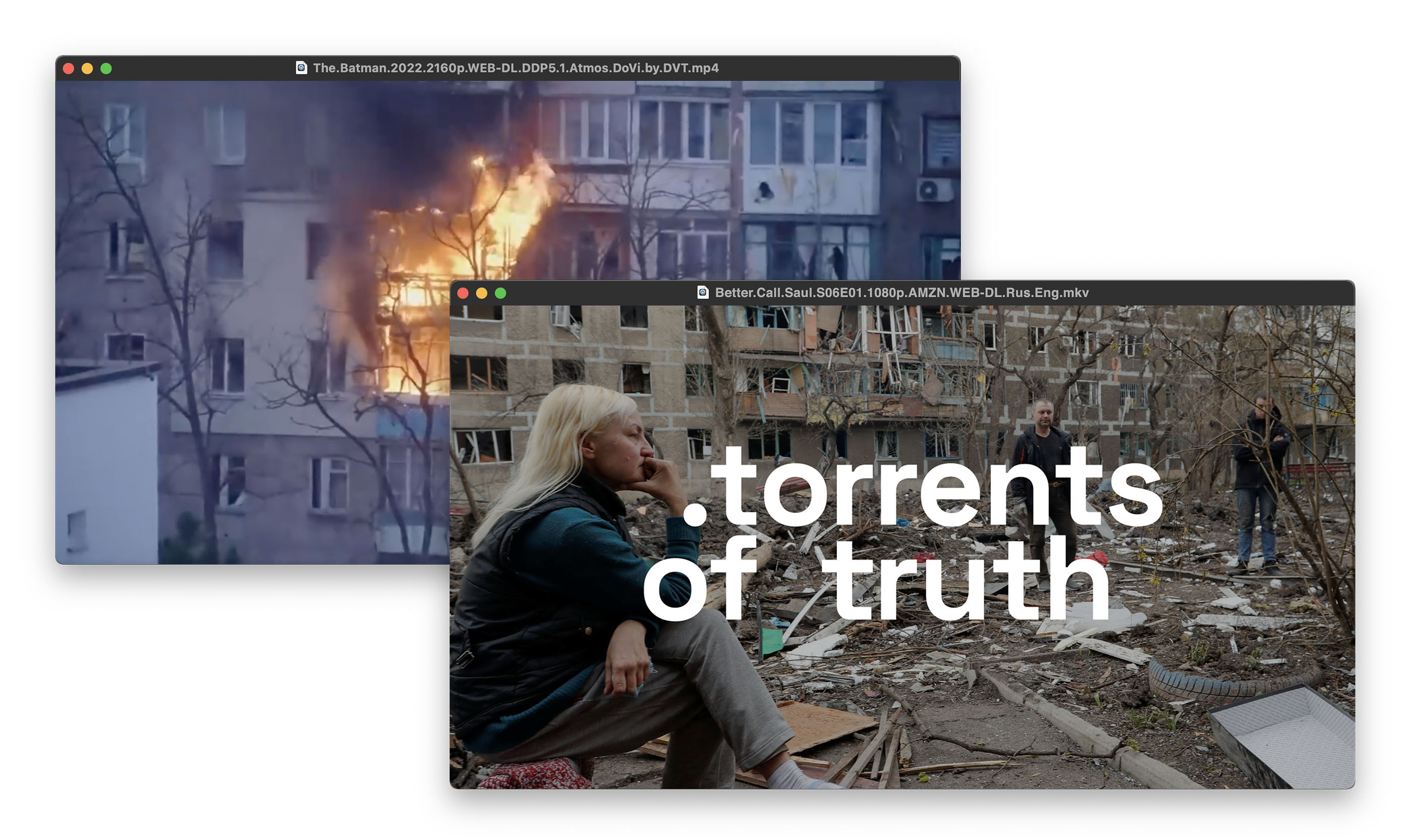 Picture this. You’re in Russia and want to see or the latest season of . You head to a pirating site and download the torrent. So far, so good. You play the file, opening credits roll. Then, instead of the film, a young man wearing a white hoodie appears on screen.

“I know this is not the content you expected, but it is what you need to see,” he says. “This is the illegal truth about Russia’s war in Ukraine.”

This man is Kyiv-based journalist Volodymyr Biriukov, one of the volunteers working on , a campaign using Russia’s high-traffic torrenting habits to bypass and inform Russians about Putin’s war in Ukraine. Just six months ago, Biriukov taught journalism to university students in the Ukrainian capital, and hosted hit TV and radio shows such as Kitchen Eurovision and Hit Parade FM-TV.

“The invasion turned my world upside down,” Biriukov tells Mashable. “Journalism is the only thing I’m good at. I started informing the world’s media and journalists about the situation in Ukraine from my bathroom.” For many Ukrainians, bathrooms — windowless and insulated by multiple walls — have been providing relative safety from Russia’s brutal and indiscriminate artillery and bombing campaigns.

Torrents of Truth was initiated by Guillaume Roukhomovsky, the French creative director of , an American/Dutch creative agency, who saw an opportunity in Russia’s refusal to pay for the use of intellectual property coming from the West. The latter was , supposedly to counter sanctions Russia was hit with after its invasion of Ukraine on Feb. 24.

To bring the idea to life, Roukhomovsky collaborated with Olga Kokoshko, managing partner at Kyiv-based marketing agency . When the war started, Nebo, which had worked predominantly in the Ukrainian market, lost all its clients. Kokoshko and her family were forced to flee. She now works from abroad, connecting Nebo to the international market. This is how she found 72andSunny, and the two agencies united to turn their expertise in marketing into a form of cyber guerrilla warfare.

How to keep up with the news from Russia and Ukraine

When it comes to the journalists in the project, Kokoshko explains, it was a conscious choice to keep Torrents of Truth a mostly Ukrainian space. Yet, they also considered the role Russians can play in spreading the truth about Putin’s war.

“We really wanted to work with Ukrainians, because they are witnesses. But at the same time, we realized that probably Russian journalists would be the opinion leaders,” she tells Mashable.

Though a huge number of Western , Roukhomovsky wanted to ensure that empathy wasn’t lost in translation and the voices of the Torrents of Truth campaign were of people Russians can relate to.

“It is important that Russian people hear the truth in Russian, and that’s not something that has happened enough,” he says.

Creating a sense of trust and connection is also an important reason why Torrents of Truth is not being run undercover. Its creators stand next to it proudly, having strategically decided against anonymity. On their , anyone can see the video reports the campaign has produced and the team is also transparent about the torrents they hijack, as well as their traction.

“It was really important for us that this initiative gets people’s attention because the torrents will get more popular the more people seed them,” says Roukhomovsky. “This is why we decided to make this initiative public and ask people from every country to download the torrents.”

“We saw an opportunity to bypass censorship in a way that couldn’t be banned or blocked.”

Roukhomovsky, who has Ukrainian roots himself, got the idea after a conversation with his girlfriend, a Ukrainian lawyer. On March 4, the criminalising whatever it decides to deem “fake news.” The penalty? Up to 15 years in prison. This is the same law that requires all to address the war as a “special military operation,” and which prohibits the wearing of anti-war insignia even by protesters. And while referring to the war as, well, a war, is now a criminal offence in Russia, piracy in the country is all but illegal. From Torrents of Truth’s perspective, this paradox created a convenient loophole.

“ is actively, on a daily basis, downloading movies, downloading software, all of that,” he says. “We saw an opportunity to bypass censorship in a way that couldn’t be banned or blocked.” 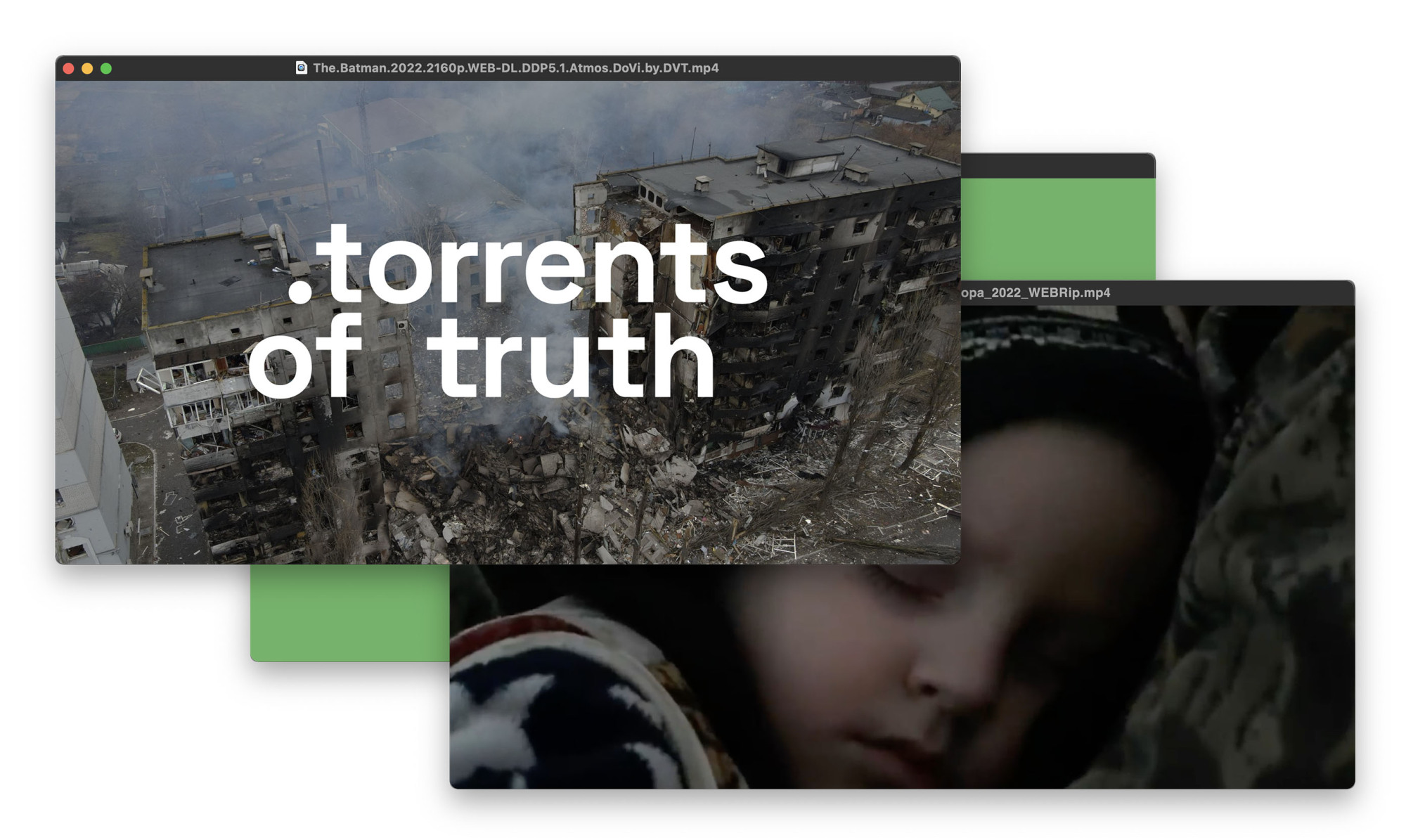 The thing about piracy is that it is practically untraceable if done right. This is why torrenting sites have been so difficult to regulate in the West, too — even if one server gets blocked, multiple others sprout in its place, and it takes as little as a proxy to access a restricted site. This works both ways, and downloaders and uploaders can remain equally anonymous.

Roukhomovsky explains Torrents of Truth has servers all over Europe, including two each in Poland and the Netherlands, and one each in France and Germany. The torrents are being seeded at high speed, and the group has multiple IPs to ensure the source can’t be blocked.

We speak to Roukhomovsky two days after the launch of the campaign, by which time Torrents of Truth had uploaded 21 torrents, ranging from The Matrix to Adobe’s Photoshop to Rammstein’s latest album, Zeit. Unlike other campaigns Roukhomovky and Kokoshko have worked on, the human impact of this project cannot really be calculated. But there is a way to relatively measure Torrents of Truth’s success, by checking how many seeds each gets.

Even with this essentially untraceable set-up, finding Ukrainian journalists willing to join the cause was a difficult task, Kokoshko tells Mashable.

“It took us a really long time because we had some journalists that got in trouble — a woman that was captured, she just disappeared in a moment,” she says. “We had other journalists that agreed to take part, but then we saw the footage from Bucha. They lost faith.”

After Russian troops retreated from the Kyiv area, the satellite town of Bucha was one of the first places whose names became synonymous with the , who massacred hundreds of civilians there — . It was a devastating sight, and it changed many Ukrainians’ willingness to talk to Russians, including some journalists who withdrew from Torrents of Truth. Yet, Kokoshko and her team saw purpose in speaking the truth to power. 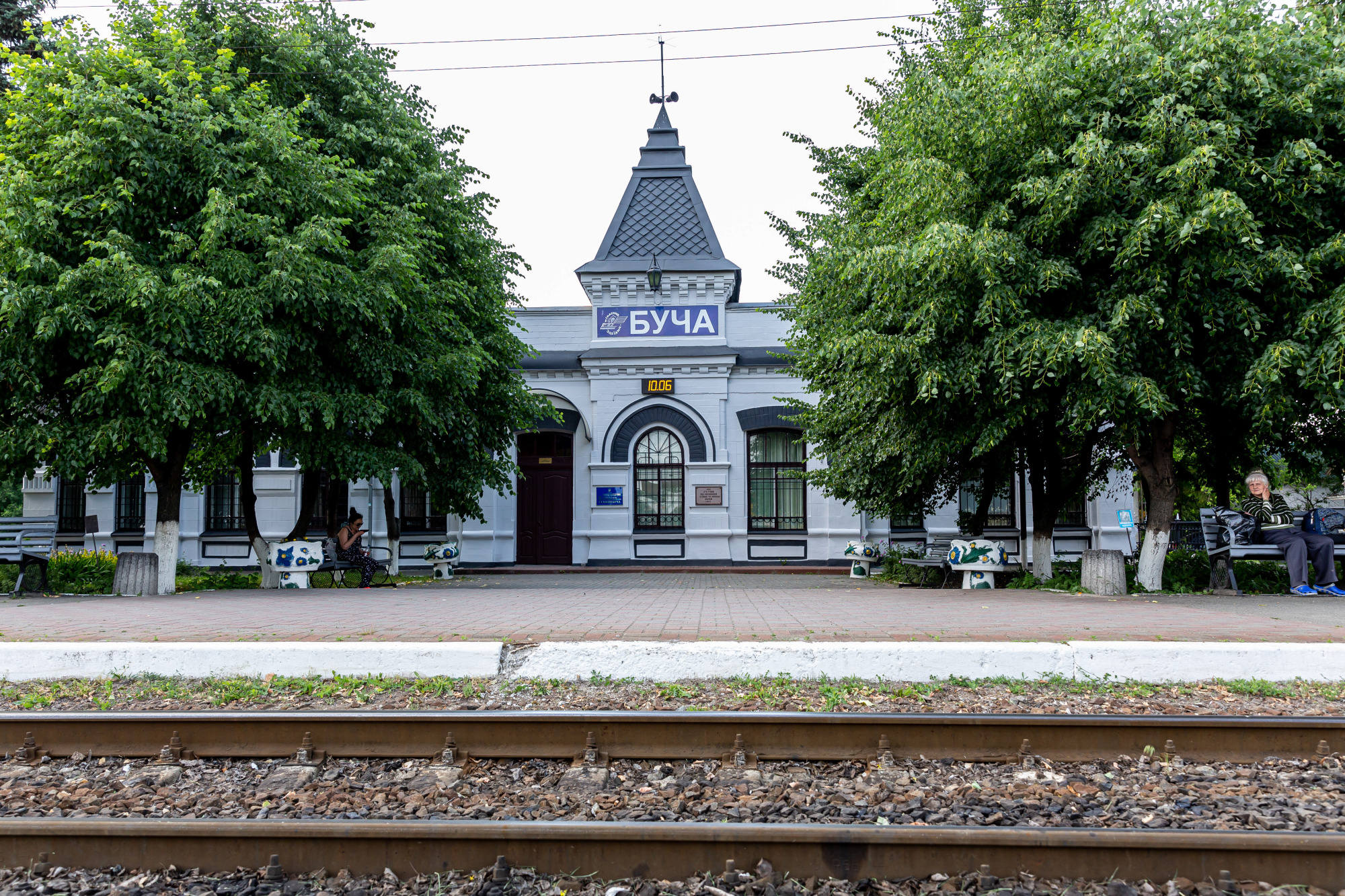 The train station in Bucha, Ukraine, undamaged by the war.
Credit: Getty 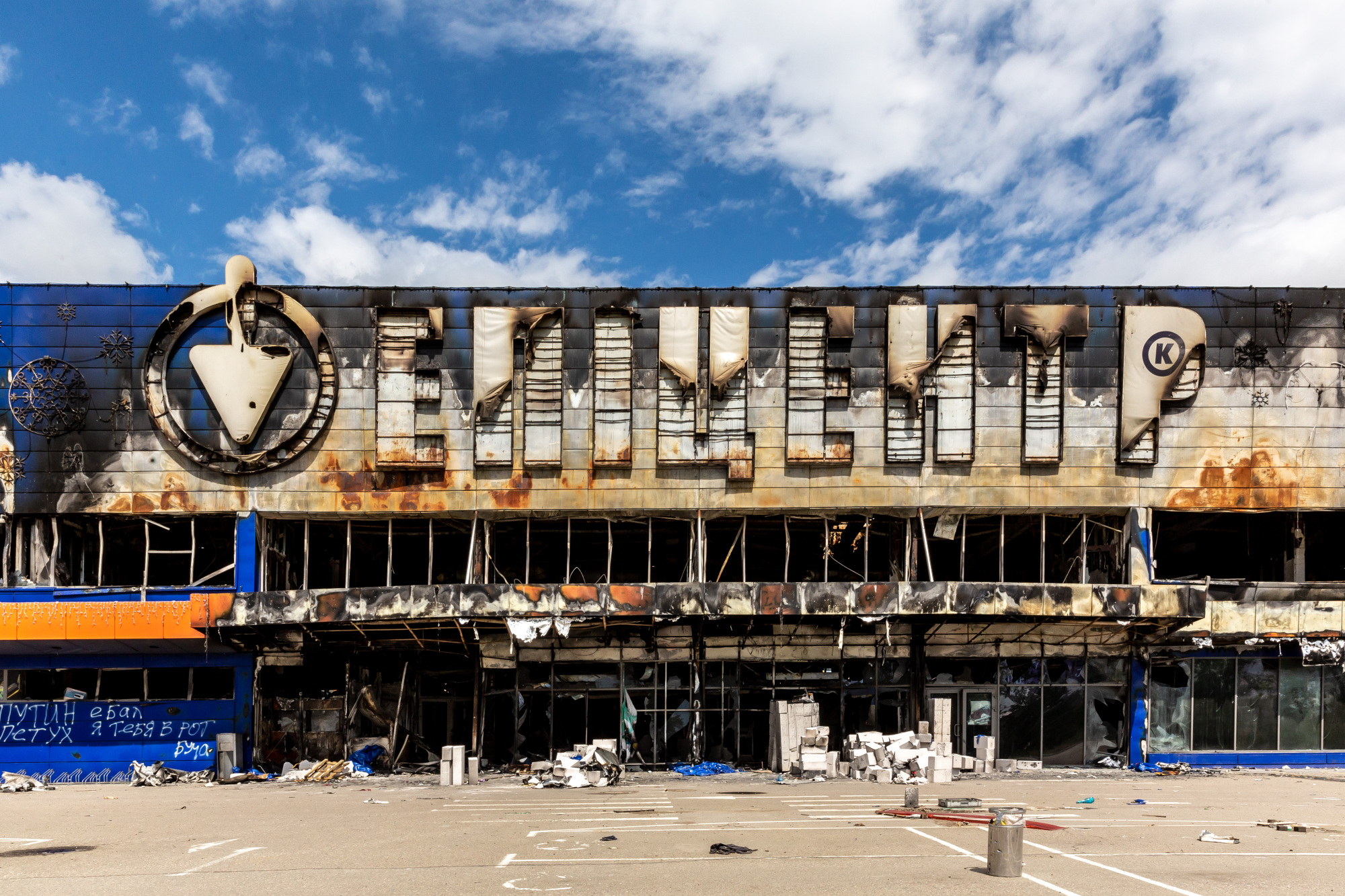 “At the beginning of this project, my team and I made a decision that we assume that many people in Russia just don’t know the truth. There are the ones who support the war, but we are not trying to change their minds,” she says. Kokoshko knows that appealing to those completely soaked in propaganda is a Sisyphean task, but she’s also aware that in an oppressed society, there is always a silent opposition — and this is exactly who the project aims to reach.

To find the best possible way to reach those people, Kokoshko and her team interviewed Russian citizens opposing the war, asking them about persuasive techniques and how to speak to those afraid to speak up themselves. It also took the Torrents of Truth team a while to find the balance between exposing the truth and not disturbing an unsuspecting viewer to the point that they would switch off — the footage they wanted to show was, though truthful, extremely heavy. 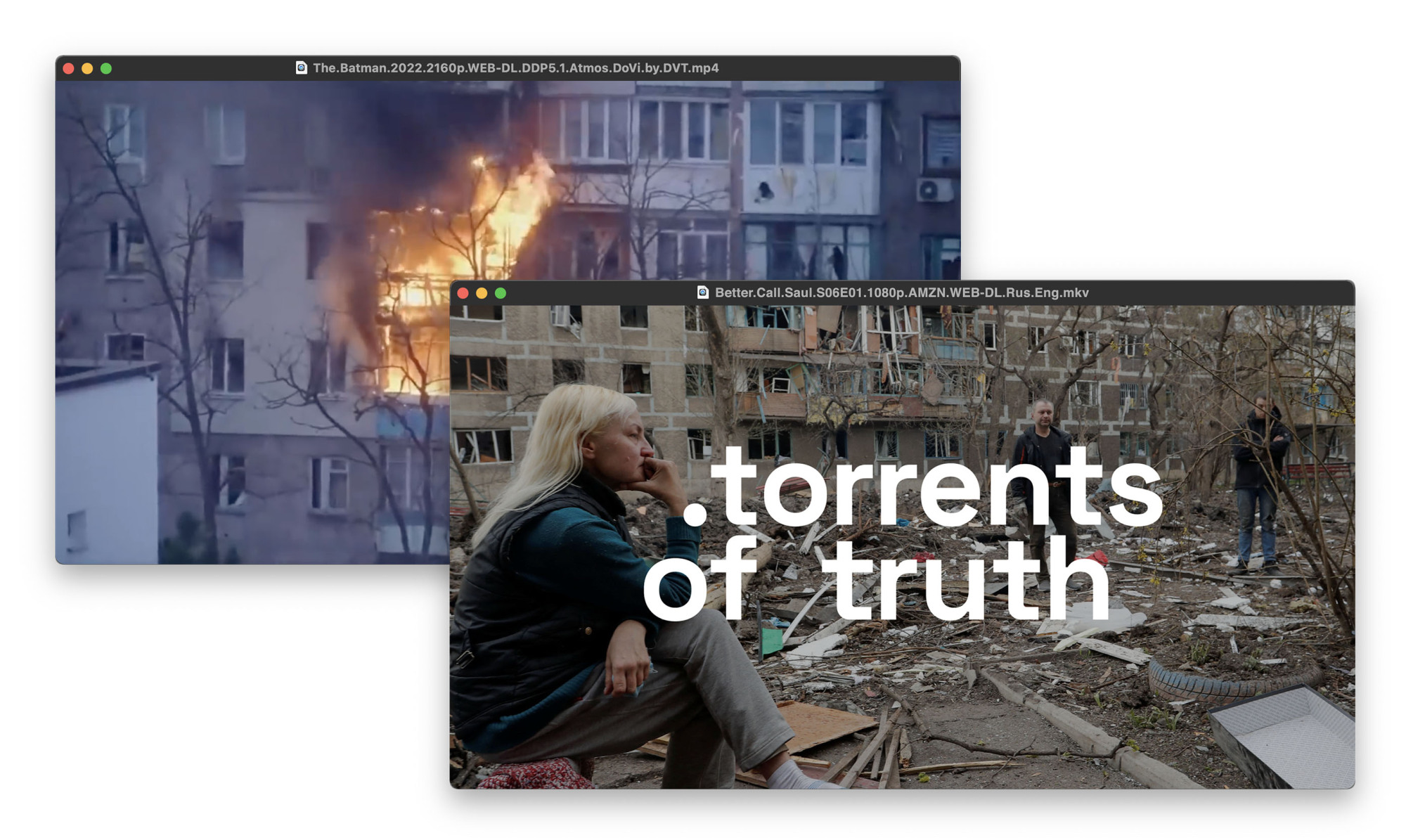 Watching footage from Russia’s invasion would be difficult not only for the viewers but for the team preparing it, too. For Biriukov, an entertainment journalist turned military reporter, reading the news again and again was the hardest part of the process.

“Summarising the most brutal atrocities of the war was hard to accept,” he says. “I also had to figure out how to explain it briefly, and keep the viewer’s attention, so that no matter what, they wouldn’t just turn off the video and delete [the torrent].”

“Summarising the most brutal atrocities of the war was hard to accept. I also had to figure out how to explain it briefly, and keep the viewer’s attention…”

Keeping a Russian citizen mindfully engaged with the reports also required the help of Moscow-based cinematographer Tasya S., who joined the cause as part of her resistance efforts from within Russia. She believes that Russians can still help Ukrainians, even from within the country, citing funds like and pointing to shops and coffee places staging events to support refugees.

“While I live in Russia, I try to spread this information, talk to different people, write ‘no war’ in the city, hang green ribbons, and donate to funds,” she says. “On May 9 (Victory Day), there were open mic concerts in the park. I managed to sing a Ukrainian folk song, and then an anti-war Russian song, and I didn’t get arrested for this, people even applauded.” 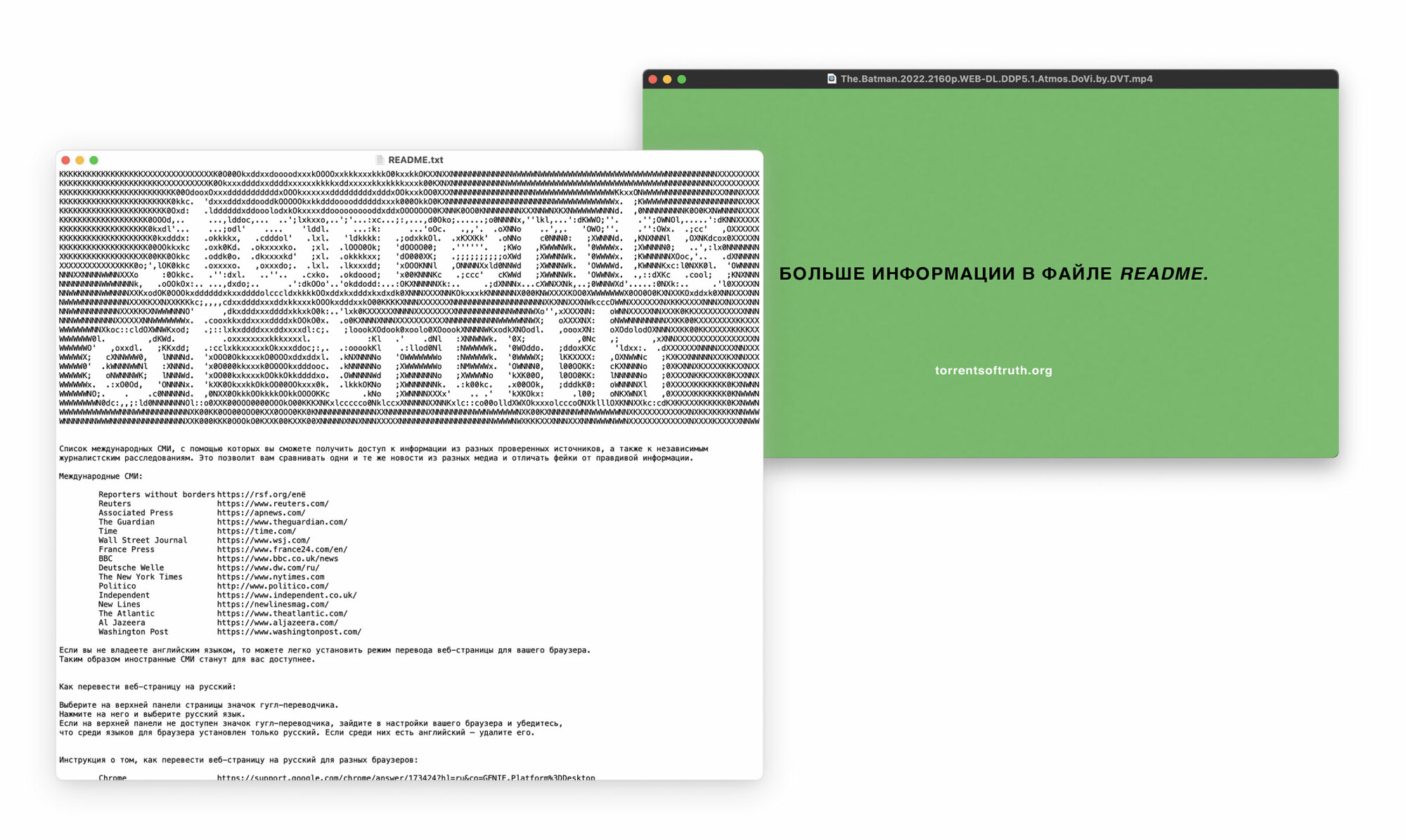 Torrents of Truth differs from Roukhomovsky and Kokoshko’s previous marketing and branding work in many ways, one of which is that there is no way to directly measure the impact of this campaign.

“After so many years of propaganda, Russia is not going to change from one side to the other in one snap,” says Roukhomovsky. “But even though 90 percent of the people who are going to see that truth might not believe it, there might be 10 percent, or even one person, one Russian citizen, that might change their mind. That’s already a good enough result for us.”

“Though 90 percent of the people who are going to see that truth might not believe it, there might be 10 percent, or even one person, one Russian citizen, that might change their mind. That’s already a good enough result for us.”

But the thing about Russian propaganda is that its approach is outdated. The same methods of censorship and oppression have been used since the Soviet days, with little creativity or understanding of the modern world, so it’s not naive to think that an innovative online campaign like Torrents of Truth can go far. Just look at Alexey Navalny, who has become Putin’s biggest opponent today, partially due to his ability to effectively use the to talk to Russians. His YouTube account has over 6 million subscribers, and, with the help of his team, Navalny regularly addresses people on , even now that he’s imprisoned. Russia’s propaganda is not the only method that has stayed the same since Soviet days. Biriukov sees Russia’s invasion of Ukraine as a symptom of a much larger issue. To him, helping others understand the truth means helping put an end to cyclical violence.

“What Russia is doing now in Ukraine, it did the same in other countries, in different wars, in different years — in Germany, the Baltic countries, Syria, Chechnya, Poland. If you read the history of 1939 to 1945, you will learn a lot about Russia, which lives cyclically and does everything the same now as it did then,” he says.

“If we speak, it means that we are not afraid. We help open the eyes of people who have succumbed to Putin’s propaganda. Each of our stories, with video and photo evidence, damages propaganda and destroys the belief that what Russia is doing is right.”

How to help refugees fleeing Ukraine