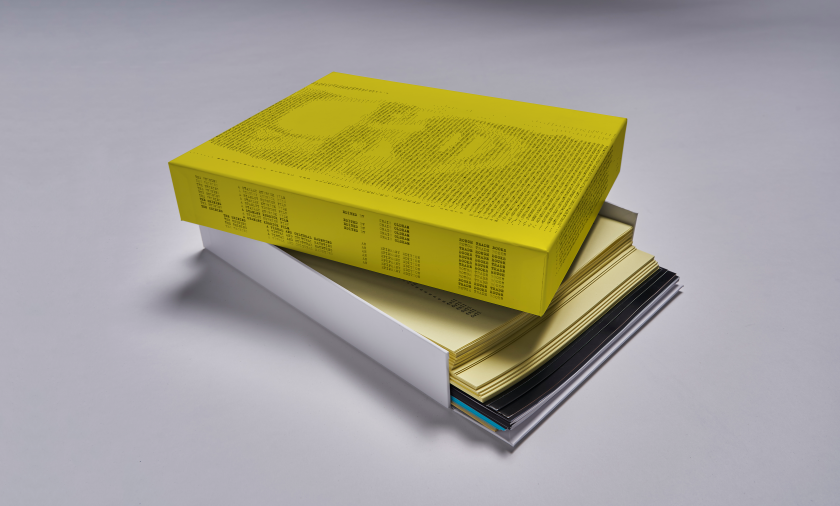 Designer and writer is taking a deeply satisfying dive into Stanley Kubrick’s psychological horror, The Shining, in a new book that not only pays homage to its cultural legacy but one that is also disguised as the “writing project” Jack Nicholson’s lead character is seen typing throughout the film.

Titled The Shining: A Visual and Cultural Haunting, the immersive book is designed as a replica of that fateful manuscript and features exclusive essays, original recollections, art and visual ephemera, as well as rare interviews with lead actors Shelley Duvall (who played Wendy) and Dan Lloyd (Danny), and contributions by Cosey Fanni Tutti, Margaret Howell, James Lavelle of UNKLE, Gavin Turk and John Grindrod.

Together, it takes a fresh look at the music, art, mythology and fashion behind the pop-culture staple. There are even republished texts read by the director in preparation for the production, highlighting Kubrick’s renowned approach to research – something that’s also reflected in the book’s design. It even shines a contemporary spotlight on the film to readdress what Oldham believes is an “apparent gap in critique from the perspectives of women, mental illness, domestic abuse and domestic violence”.

But it’s not out yet. The Shining is launching today on in collaboration with Rough Trade Books, so if you’re interested, you can help fund the project and bring it to life. In the meantime, we sat down with Craig to discuss the inspiration behind the title and discover more about the treasures he unearthed during its making.

Why The Shining? What makes it so special? Or perhaps worthy of another look?

As the Epiphany Editions are about fictional books made real, The Shining features a book (if you can play loose with that concept, literally), and it provides the catalyst for the story’s narrative. Until Wendy finds Jack’s writing and realises he’s succumbed to the worst, the film is building towards that moment.

Beyond that, I find the film endlessly fascinating. Its existence today is more as a matrix than a movie, operating as a vessel awaiting the furnishings of each viewer so it can confirm or confound their interpretations of it. Come to ‘The Shining’ with a love of haunted house stories, and it will regale you. Come with a conspiracy theory, and you shall be cited evidence. Come with fears of the effects of the dysfunctional family, mental illness, or isolation, and you’ll witness their study.

Beyond its qualities as a film, this is perhaps the most astonishing attribute of The Shining as a piece of cinema, and its most interesting and intelligent quality – it will give back to you what you offer up to it. Do I like it? Yes. Does it also frustrate me? Indeed. 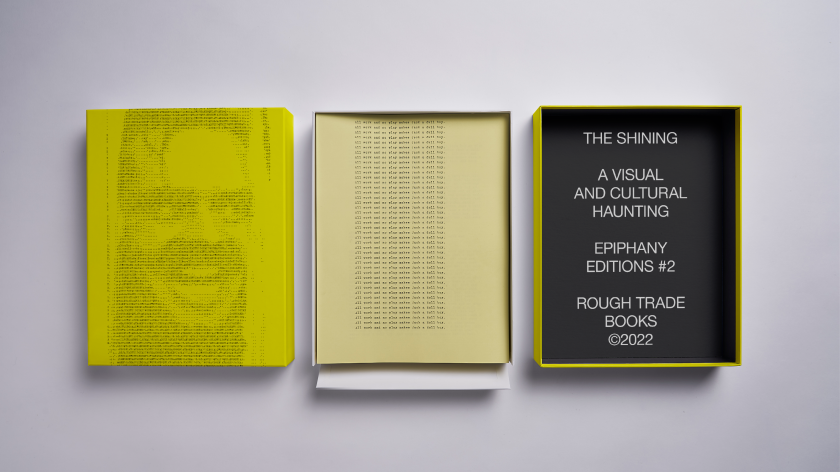 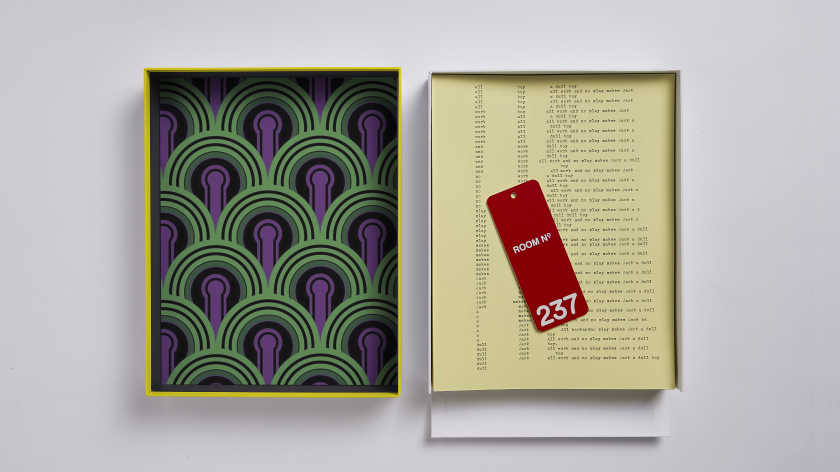 This is another rich dive into the creativity behind a film. What treasures did you dig up? Things you hadn’t noticed or realised yourself?

It certainly is. We’ve been studying the film, and its associated cultures for three years now, visiting archives, finding collections, objects, ephemera, all to explore the visual culture of the film. There are many things to be unpicked or extrapolated, especially when it comes to the amalgamation of real-life hotels, which Frankenstiened the Overlook Hotel into being.

I found that particular dig extremely interesting, and though its surface is well documented, we found other elements that go deeper in. Hence, we have a scrapbook dedicated to the hotel’s visual culture inspired by the scrapbook that Kubrick left out of the film’s narrative but that appears as a ghostly prop towards the ends of frames here and there.

What of the creative stands out for you? Sometimes you’ve always wanted to discover more?

I’ve always been personally fascinated with the manuscript itself. Why that statement? What drives Jack to write it endlessly? Fun? Punishment? Was he always writing that, or was it something else first? Why not just endlessly typed? Why be styled in such a way unless that visual has meaning? It fascinates me. A lot of that links to concrete poetry or certain conceptual artists, even the Calligrammes by Guillaume Appolinaire and John Cage’s lectures. I could have done a book entirely on this.

My passion for this led me to ultimately track down the same Adler typewriter used in the film to experiment with it. After some sage typographic advice from a couple of friends, we decided to punch the full character set at different intensities and digitise them to create a bespoke typeface to recreate the film’s infamous prop. The font is coded to utilise contextual alternates and sets in random ways so that letters and repetitions are less automated than they would be by just using any typewriter typeface. As I said, I could talk about this aspect alone for ages. 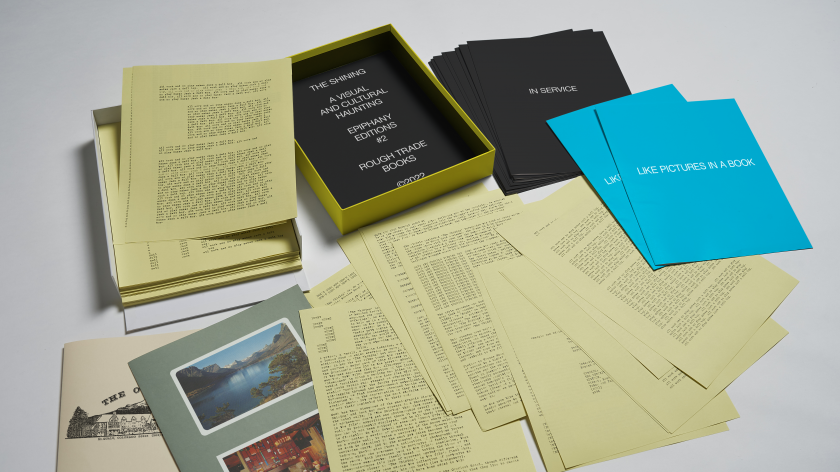 Who did you approach, and can you share snippets of what they shared? Give some examples.

Criticism and analysis of The Shining are overwhelmingly male. There’s an apparent obsession with not only the film and its male monster but the man who made it also. We wanted to reappraise the film from what we saw as a neglected or underrepresented area of critique, which was something not of the heterosexual male, so we largely looked to dominate critique from the female perspective. We collaborated with women writers, musicians, and designers to offer their views on the film or their involvement, from Margaret Howell to Cosey Fanni Tutti, and ask them to critique the film’s legacy or history.

For me, CFT was incredible because she brought a depth of insight into the sonic and musical experience of the film and its portrayal of domestic violence and domestic abuse. I’ve pulled out a snippet here: “At the Overlook, the family have a huge hotel at their disposal and as such had what many deem an option in abusive relationships – just give each other ‘space’. The abuse persists despite their location underlines again that Wendy isn’t the problem, but rather their relationship is. Jack is the problem. The hotel ghosts feed his repressed hatred and resentment of his wife and son, upholding his self-serving attitude and encouraging him to kill.

“That enforced ‘enclosure’ only exacerbates the dynamic of a troubled relationship. What happened to Shelley Duvall at the hotel is what many abused people experienced during the coronavirus lockdowns. There’s no escape from the relentless torment, so the tension escalates and is alleviated through bullying, assaults, and violence towards the partner. It’s all, again, women in service to men.”

We got some answers. But we also got more questions. But that is how The Shining is. It does to you what the hotel does to its guests. It makes you shine, makes you see things that you are never really quite sure are there or not.

How does the film shape up in modern times compared to its release date? What critiques did you find with the film? Where could it have improved?

I think it holds well. In many ways, it pioneered at the time of its release, and in other ways, it bricolages the tropes of horror and puts them into higher art, let’s say. But I think, like many films – Blade Runner springs to mind, which actually uses footage from the Shining – suffers from version syndrome.

There are at least three cuts of The Shining, and each leaves bits out from the next. For me, a doctor scene retained in the US cut but omitted from the European one really contextualises and deepens the family dynamic. However, leaving out the spooky cob-webbed skeletons at the end of the same cut can go for me. 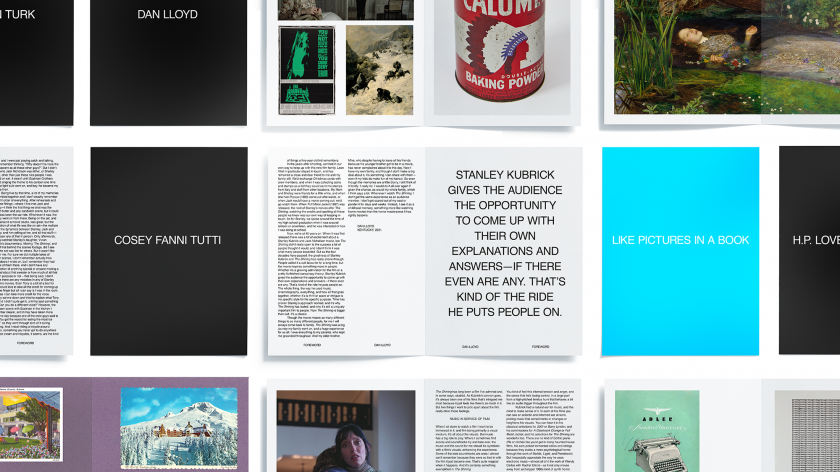 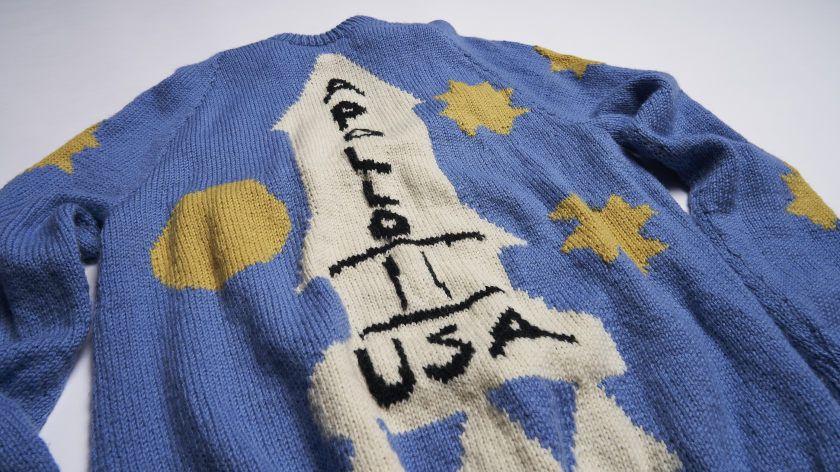 A family in isolation sounds familiar, given the last two years. It’s a timely release. Was that deliberate?

We initially started research before Covid 19, but this exacerbated the themes we were already exploring. We were looking at the nuclear family, mental health, domestic violence and so on. Sadly, these all came to the fore during the lockdowns and not always in a good way. I have to admit, writing a book about the effects of isolation whilst in isolation is enough to make one very dull boy.

Anything else you’d like to add about the book and your interest in the film?

It seems that the fundamental crux of The Shining is whether you find it scary and before I started the study, I always felt this was in part down to identification. Kubrick seemingly heaped praise on Nicholson, and I think that indulgence tips the balance into many coming at the film from the perspective or involvement of Jack.

In that sense, you are watching a man go insane, or you believe he already is. But if you switch your view to Danny or Wendy, the film becomes truly terrifying. As a young child when I saw the film for the first time, shortly after a parent’s divorce, I found it horrifying. But that is again what makes it so. It gives to you what you give to it.