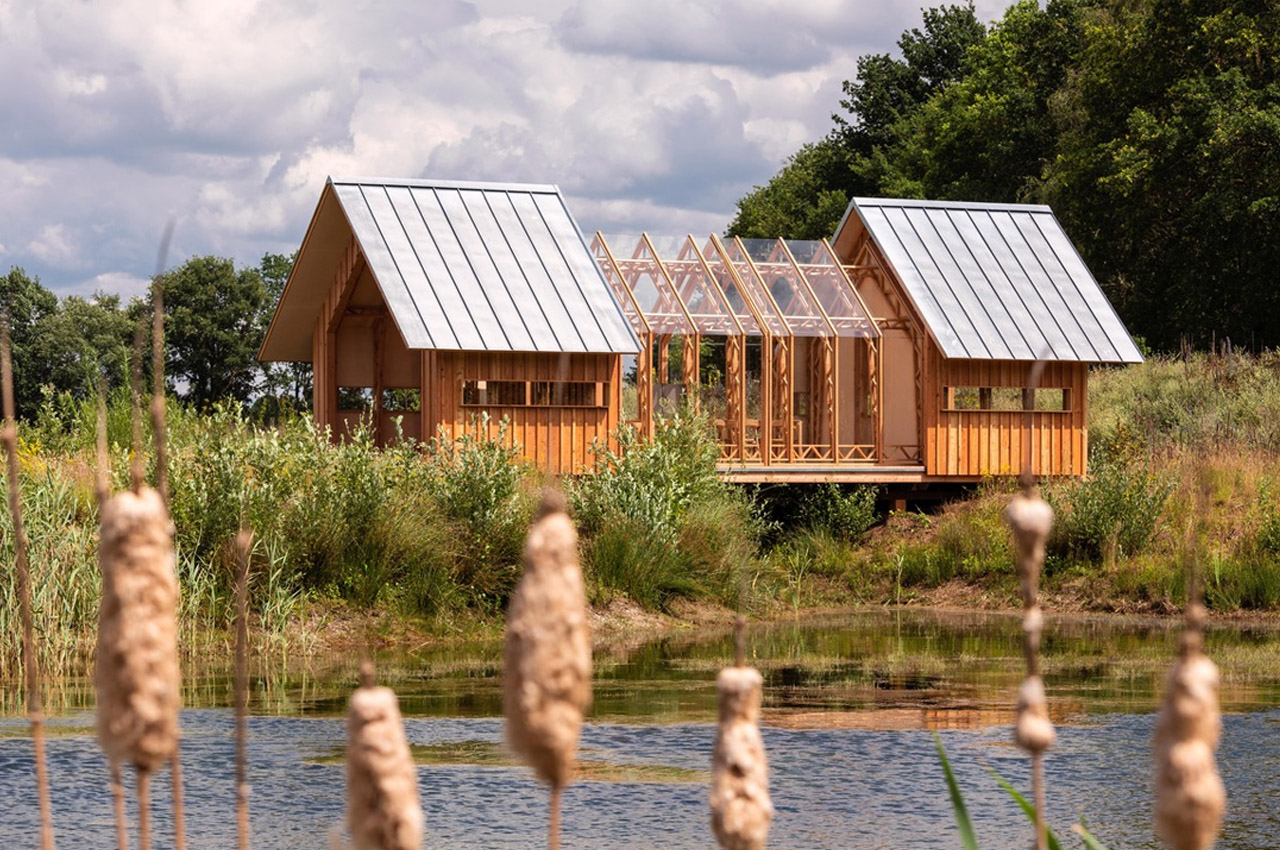 Following his ever-popular Garden House with Anna, Dutch designer Caspar Schols built a versatile flatpack home whose frame changes with the weather on guided support rails the same way we change clothes to match the weather.

Nothing has taken the world by storm in recent years quite like . Following stay-at-home orders, our backyards suddenly had endless potential and we went searching the web for our own private oases that could arise in the comfort of our own backyard. But Caspar Schols, the architect behind Cabin Anna, was doing it before it was cool. Way back in 2016, Cabin Anna began as a backyard Garden House for his mother. Fast forward to 2021 and Cabin Anna is one of the most talked-about cabins today, featuring a structural frame that can be peeled away and zipped back up to adapt to changing weather and types of activities. 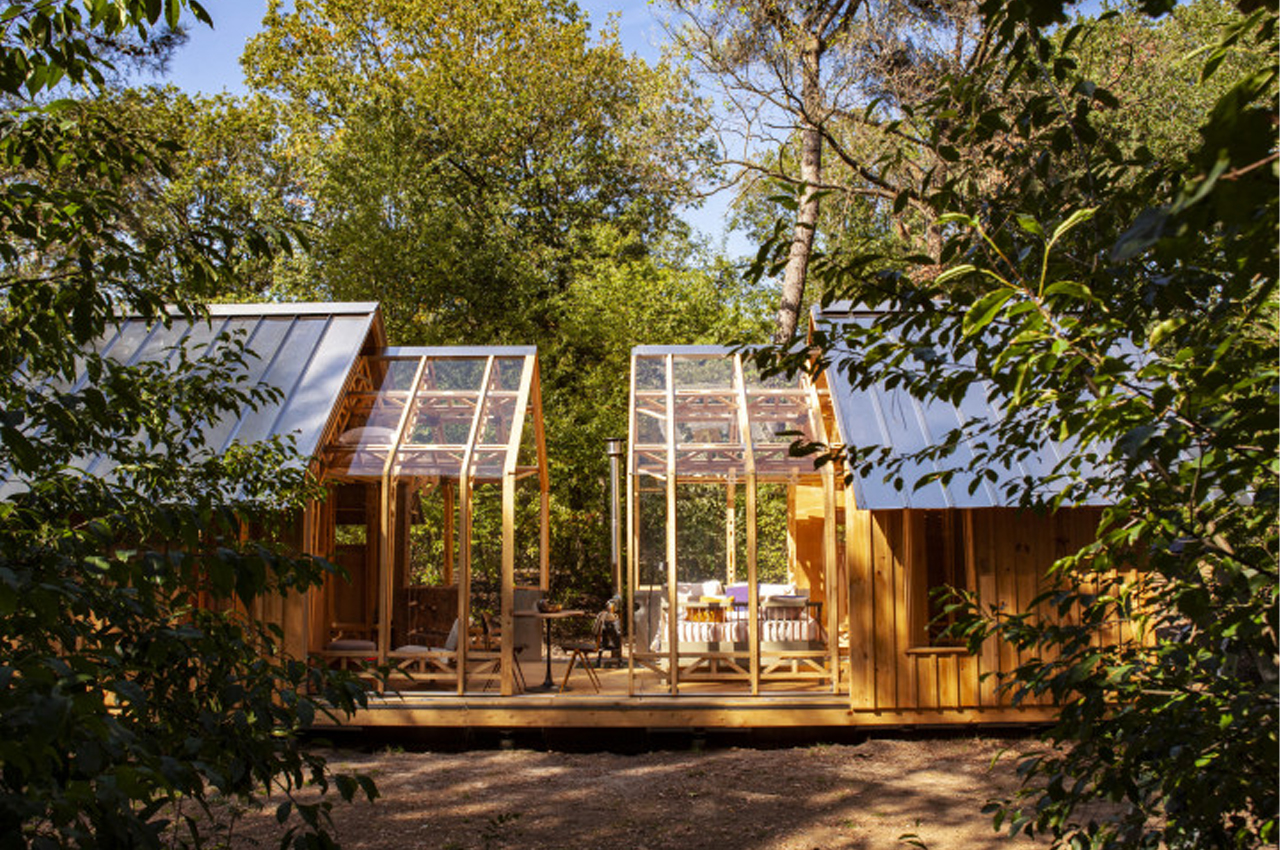 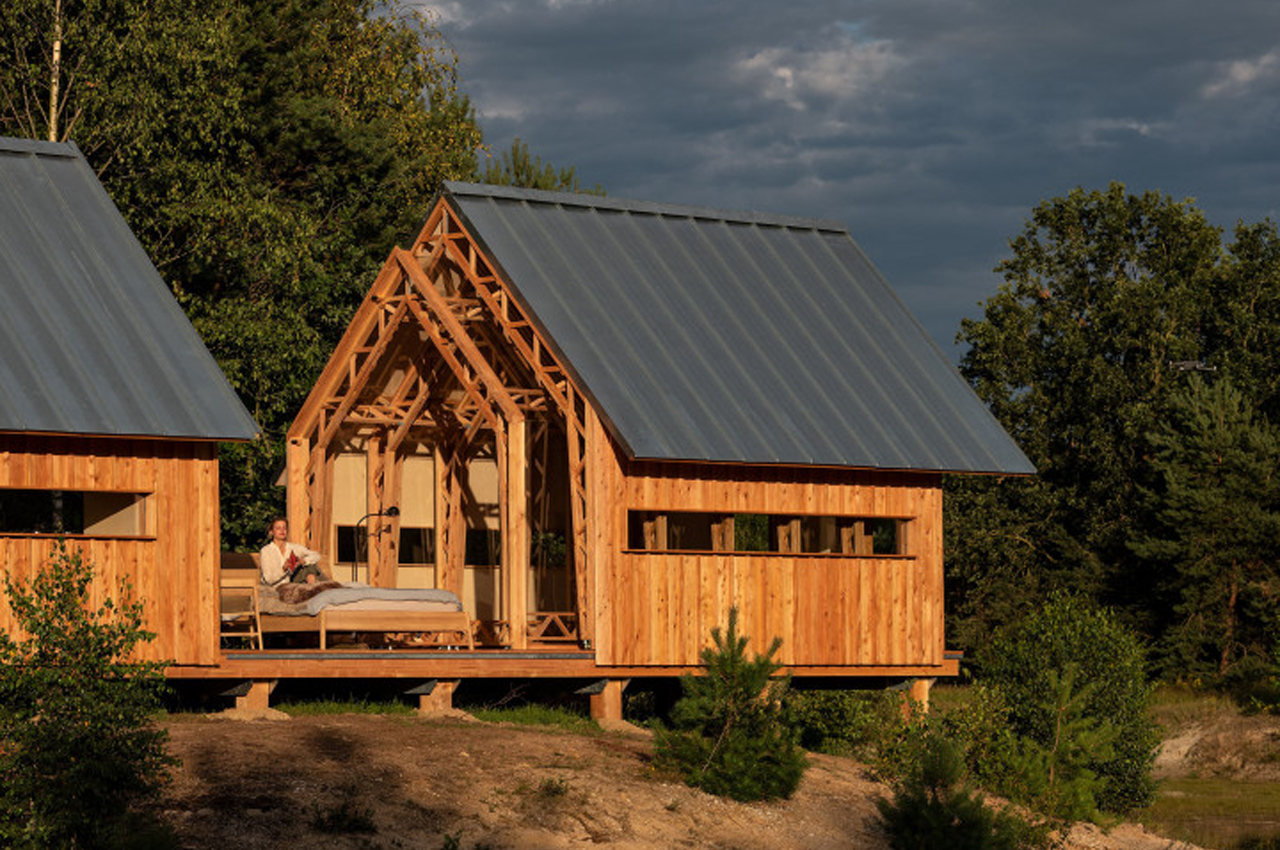 Constructed from two separate ‘shells,’ as outer walls, Cabin Anna’s exterior layers can slide away on support rails to reveal different configurations of the cabin for changing weather. When the weather dips below freezing and the wind starts blowing, Cabin Anna stands as a single unit to keep you from the cold. As a single unit, Cabin Anna appears as a traditional wood cabin in the forest where guests and residents can write, read, sleep, or have a movie night. Once the cold night passes and the morning sun comes, Cabin Anna’s wood trusses can retract from the cabin’s glass frame to create a transparent living space in the cabin’s center or on its right-hand side, functioning as a sort of glass-enclosed sunroom. Then, when the hotter months roll on, the cabin’s innermost glass frame can slide away to create an entirely exposed center room for sunbathing, outdoor sleeping, and general relaxation. Also equipped with the bare essentials, Casper Schols integrated rooms for a shower, toilet, bathtub, complete kitchen, and space for a couple of beds. Cabin Anna can also be made to order for off-grid living, complete with a fire-heated boiler, a solar power grid, and a water waste treatment system. 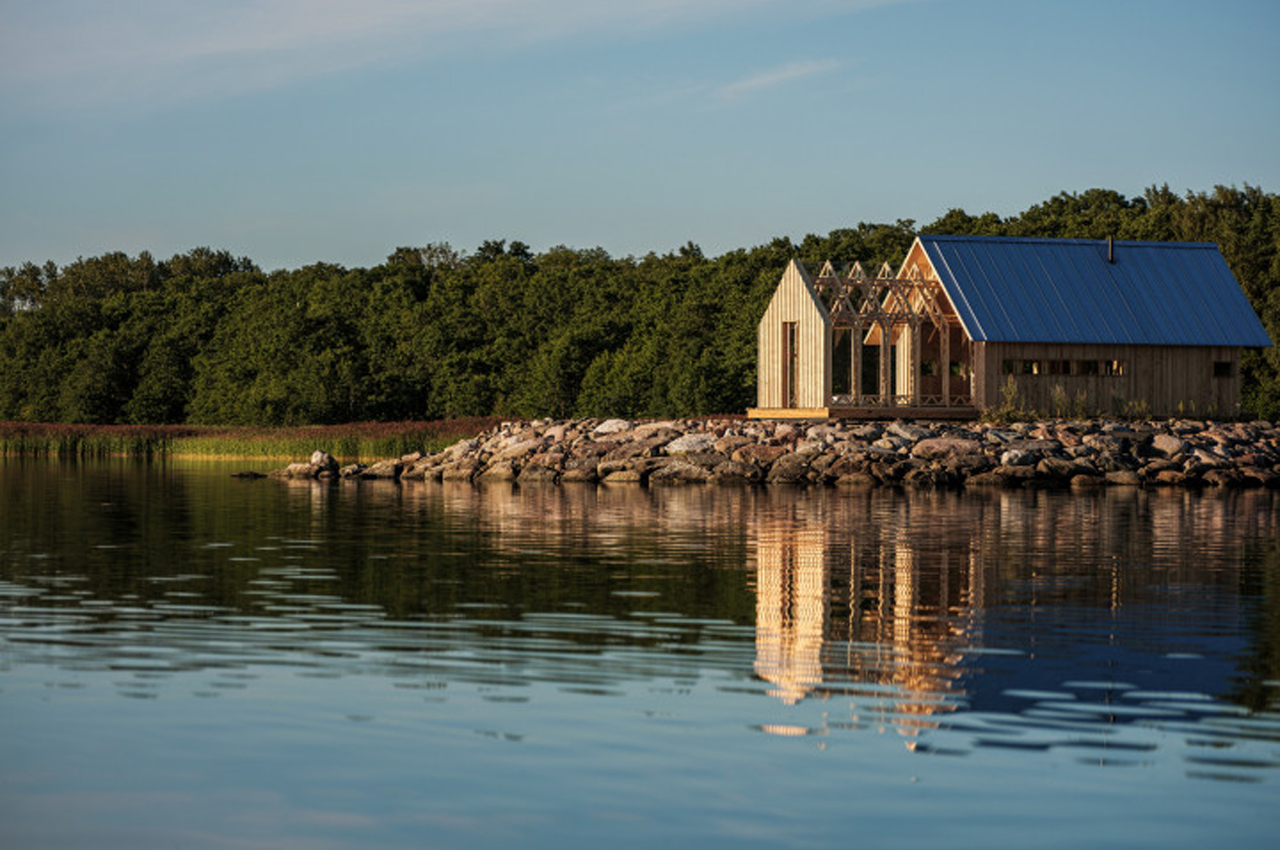 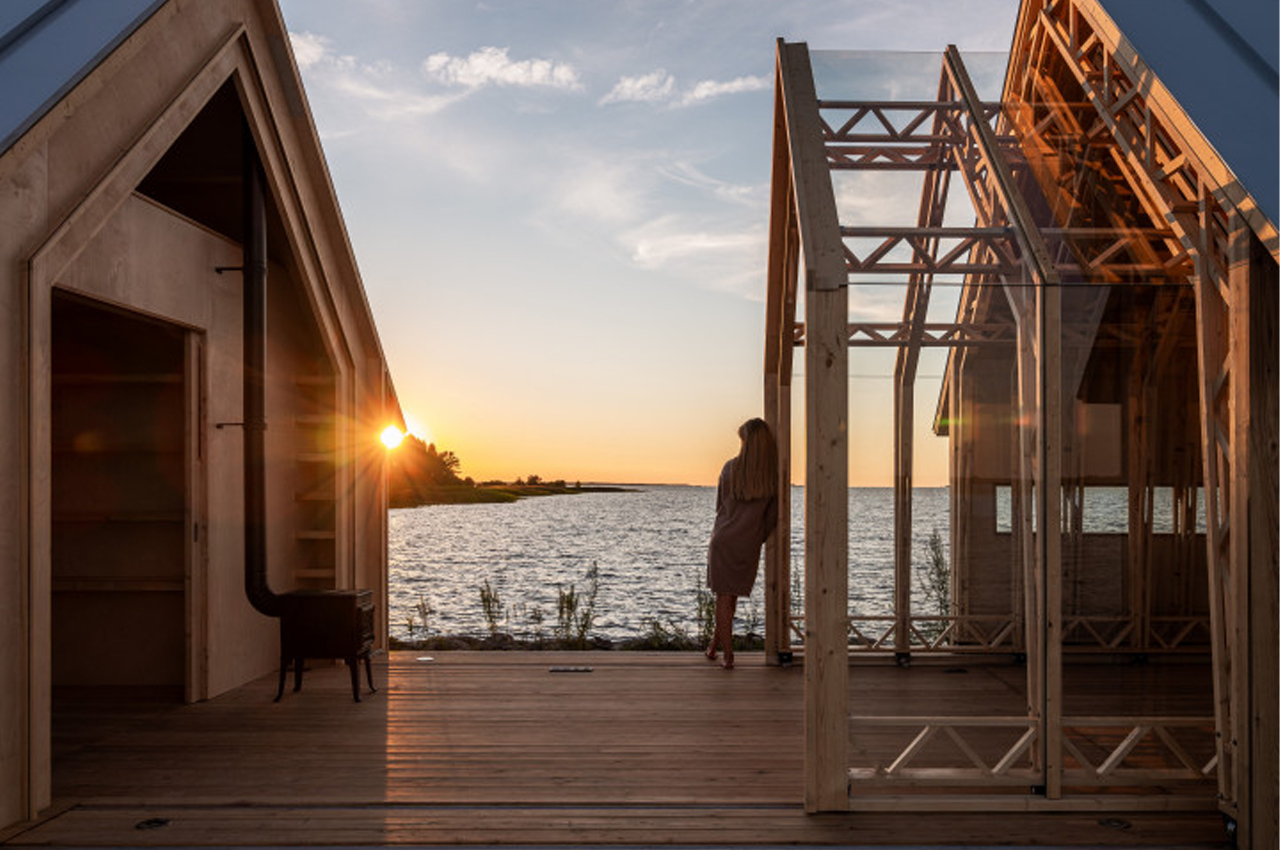 After completing work on his mother’s Garden House, Schols set out to build a “sellable, fully inhabitable house, as a flatpack that could be built and rebuilt anywhere in the world,” as he describes it. Cabin Anna gets the job done and then some. Describing Cabin Anna’s versatility and changing framework, Schols notes, “The inner wall consists of a framework of wood and glass and is separated from the roofed wooden outer wall. By shifting the shells, different setups are possible to align with your mood, the occasion, or weather conditions. Just like the way you adjust your clothes.” 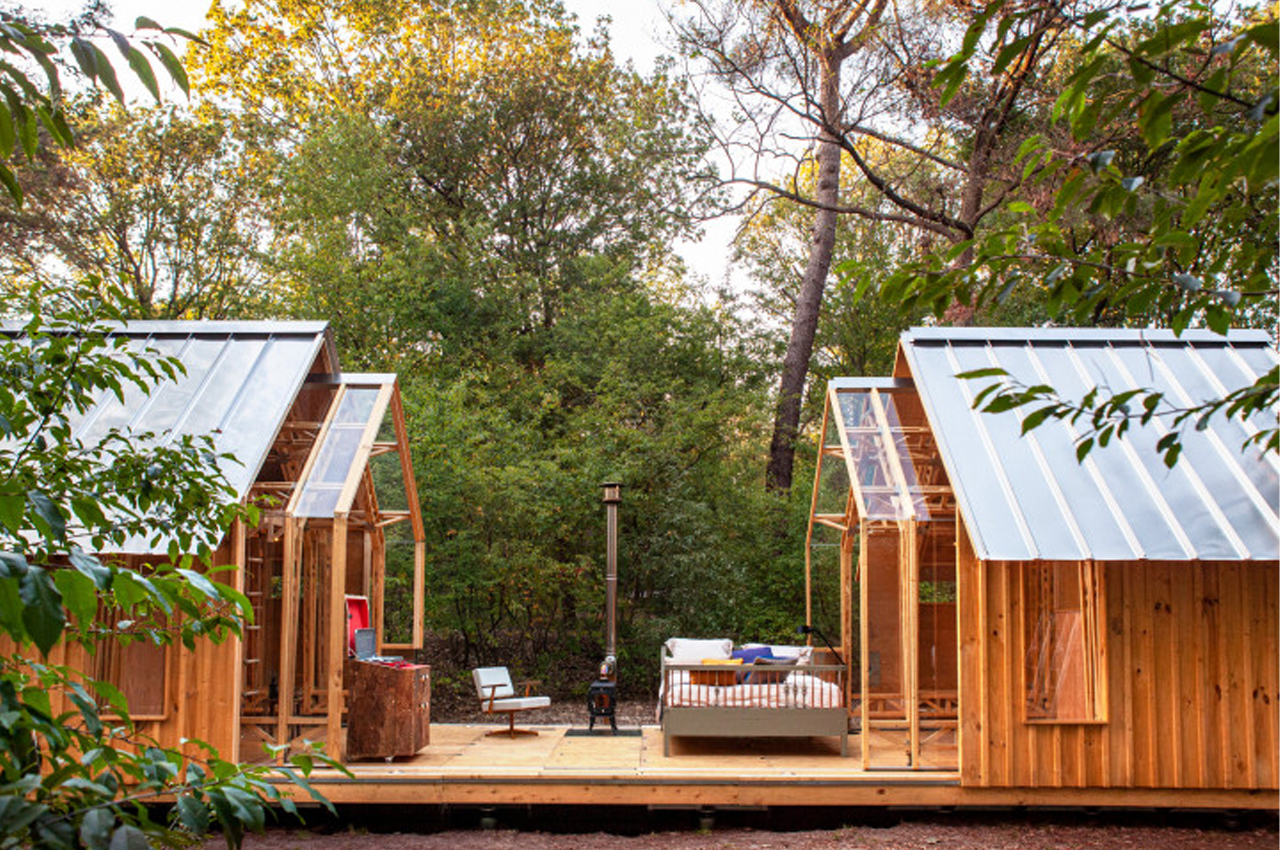 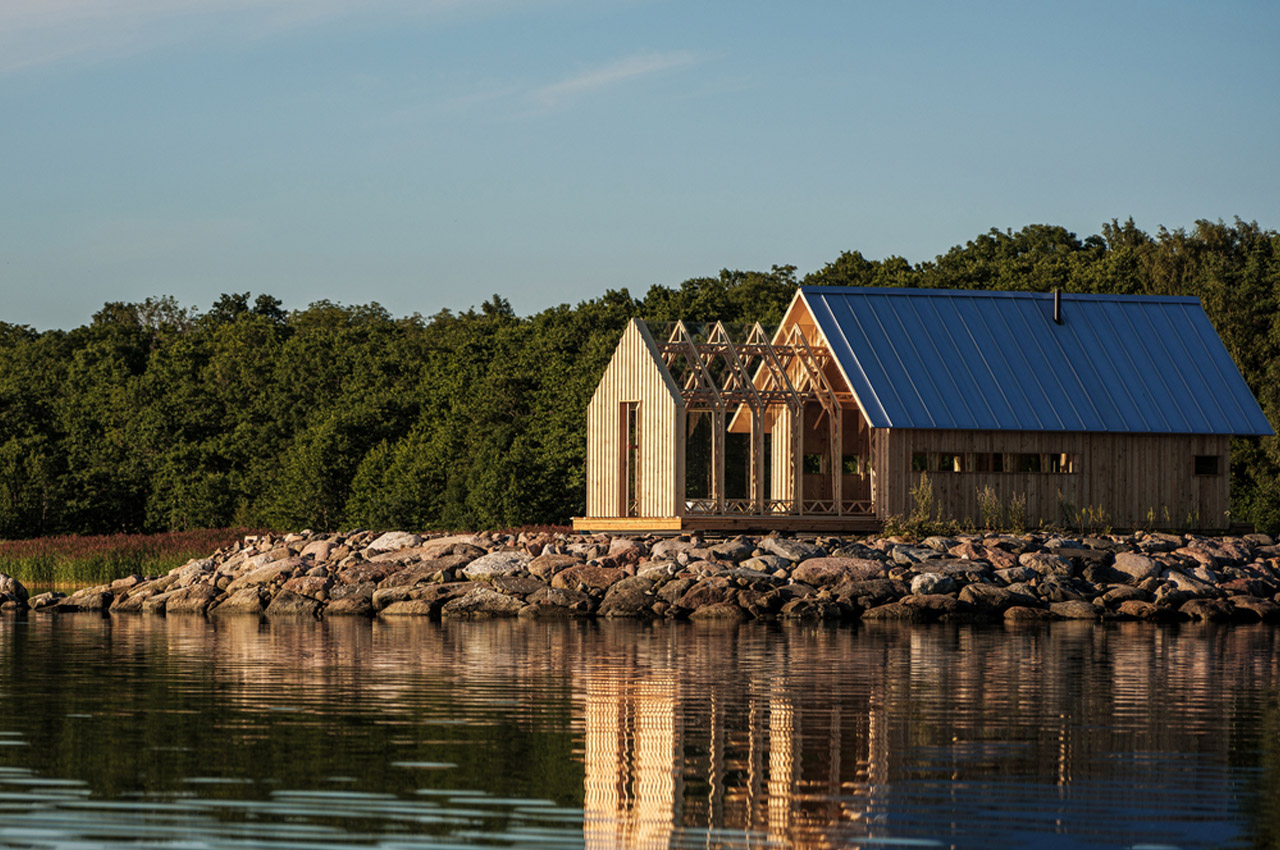 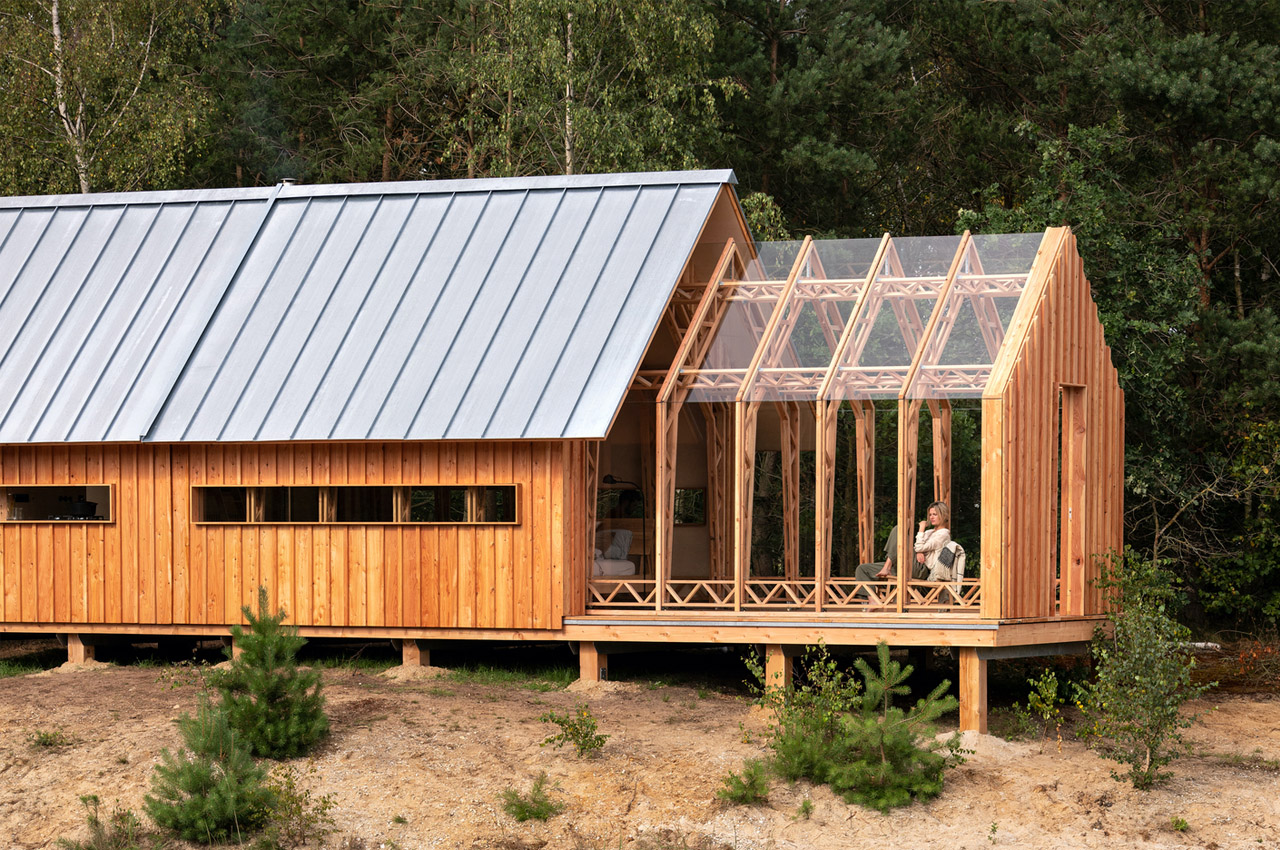 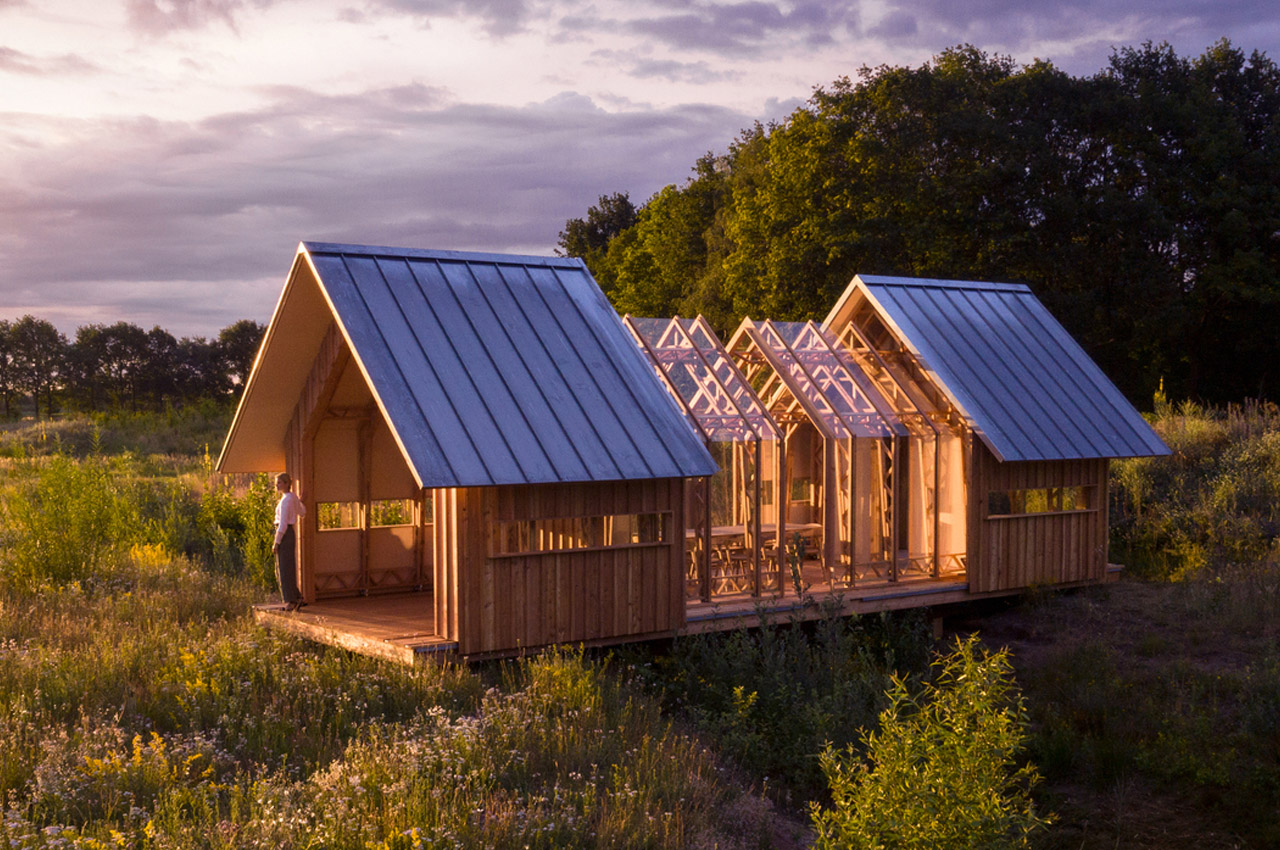 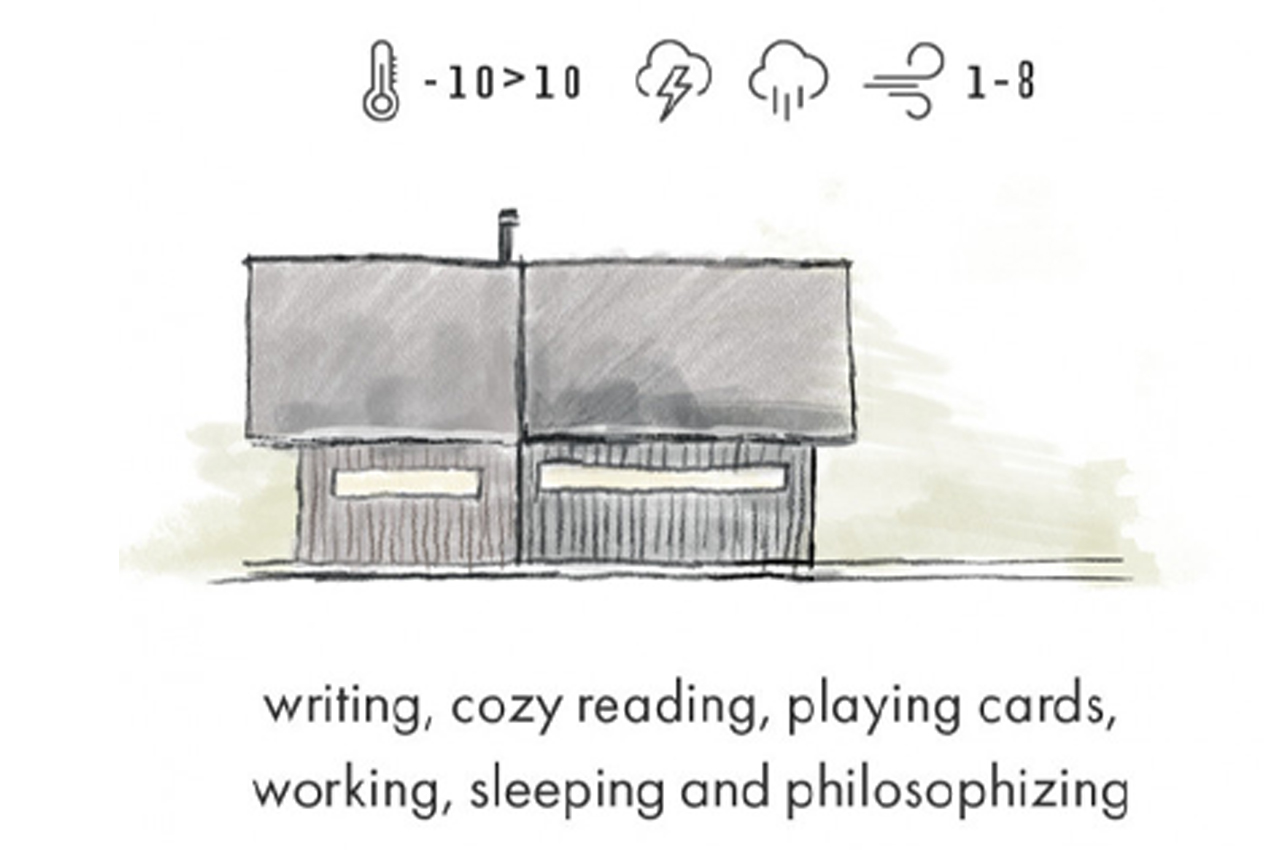 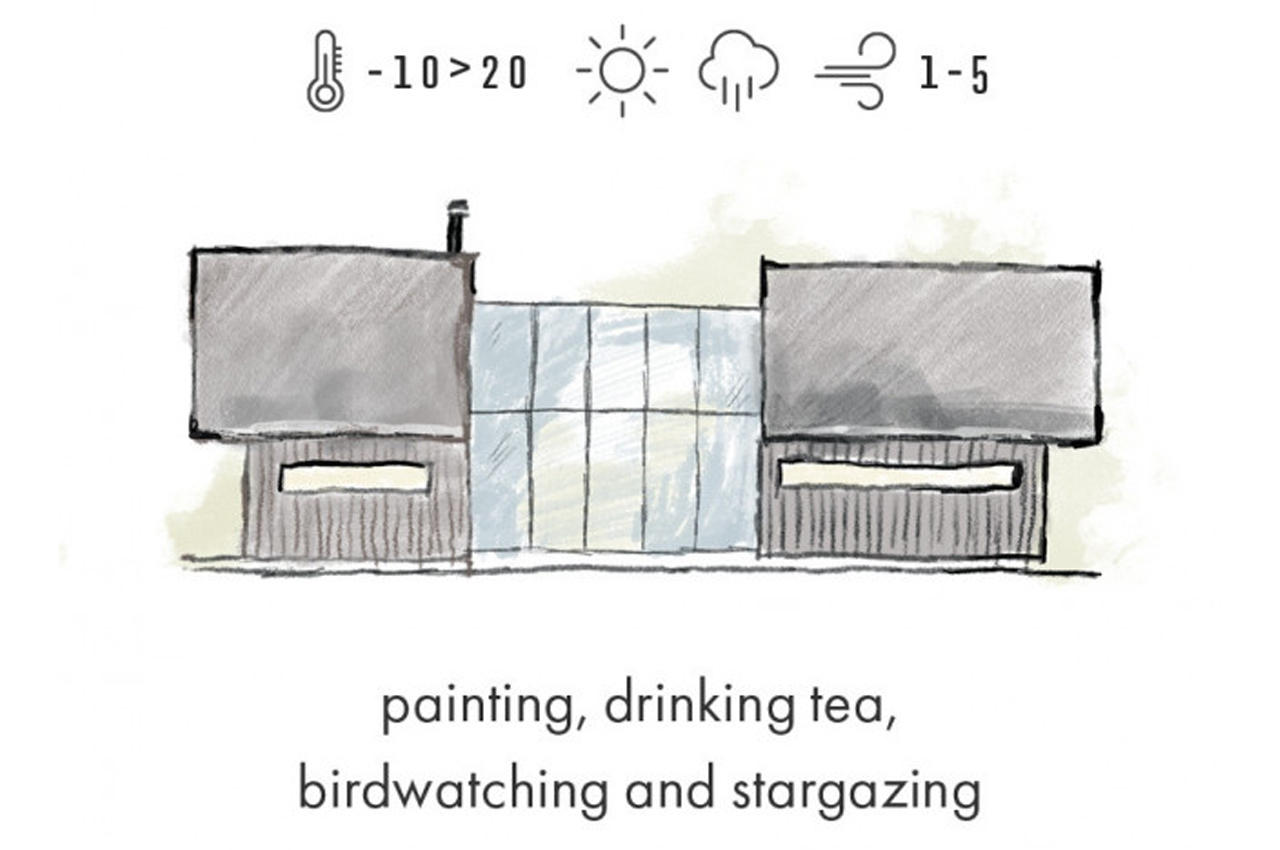 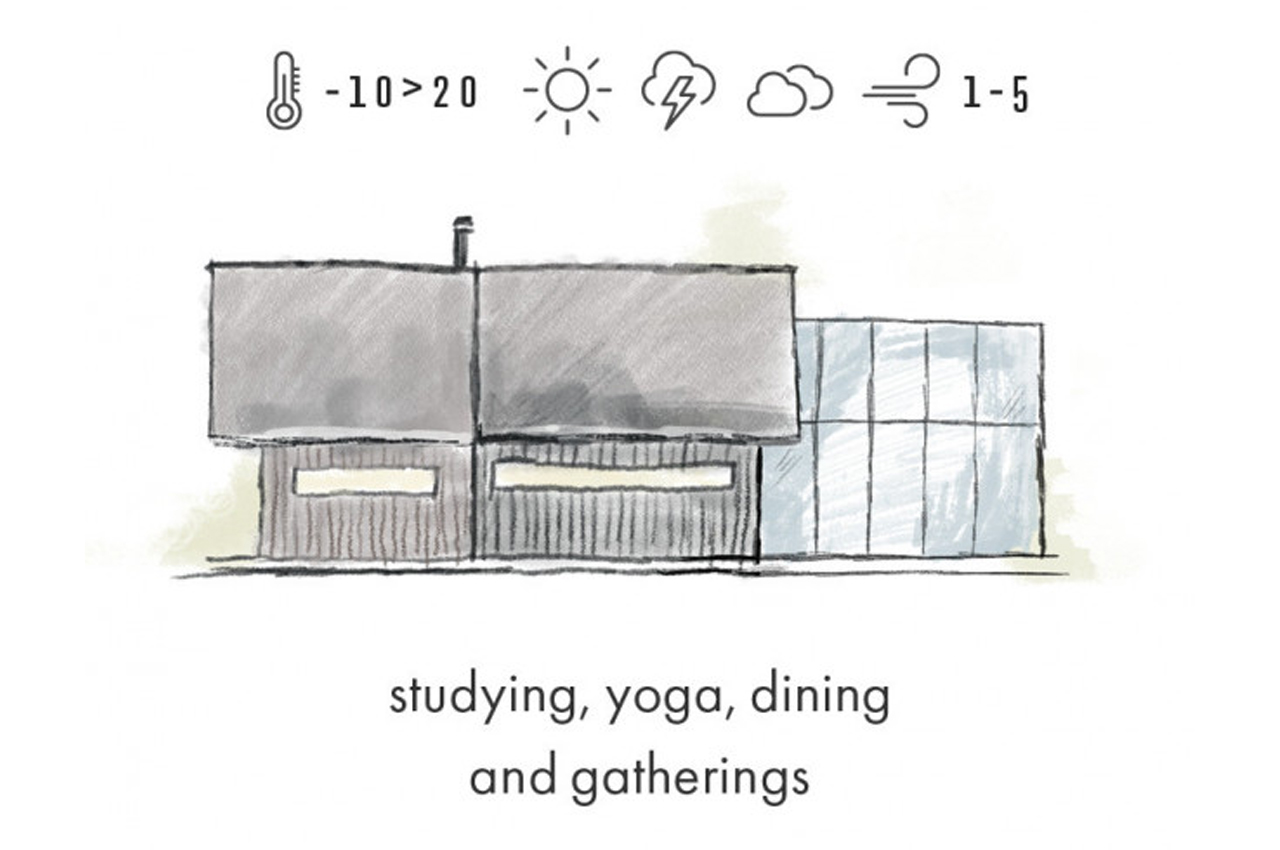 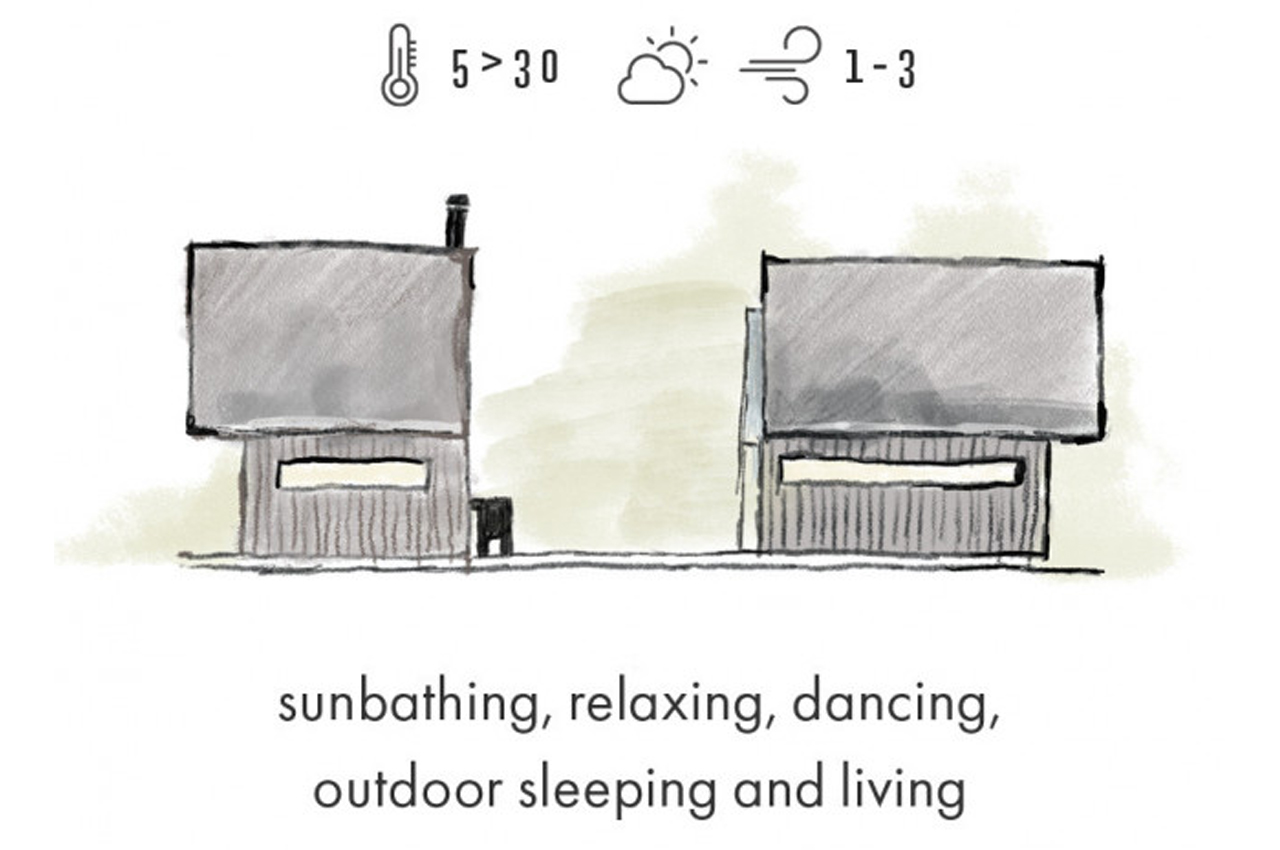 Depending on the weather, Cabin Anna is designed to change with it. 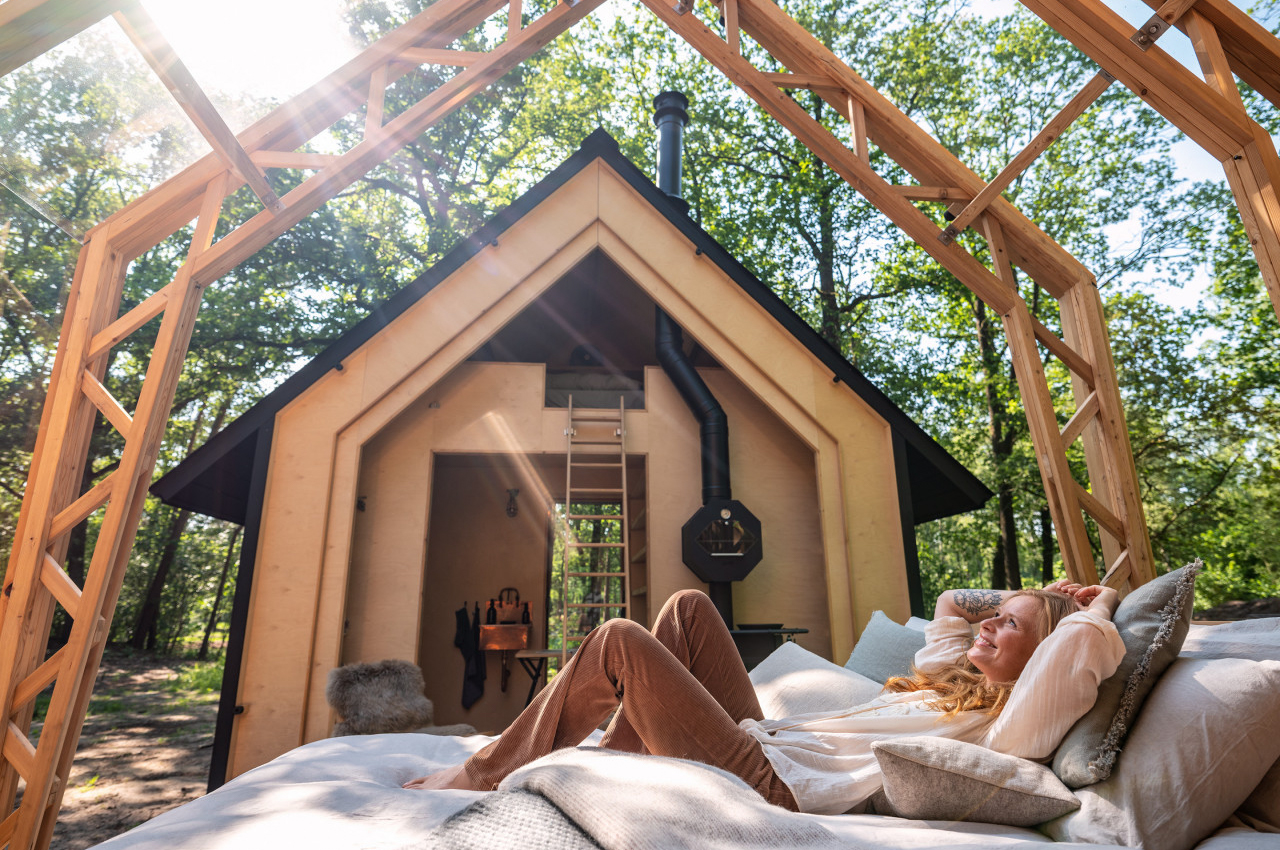 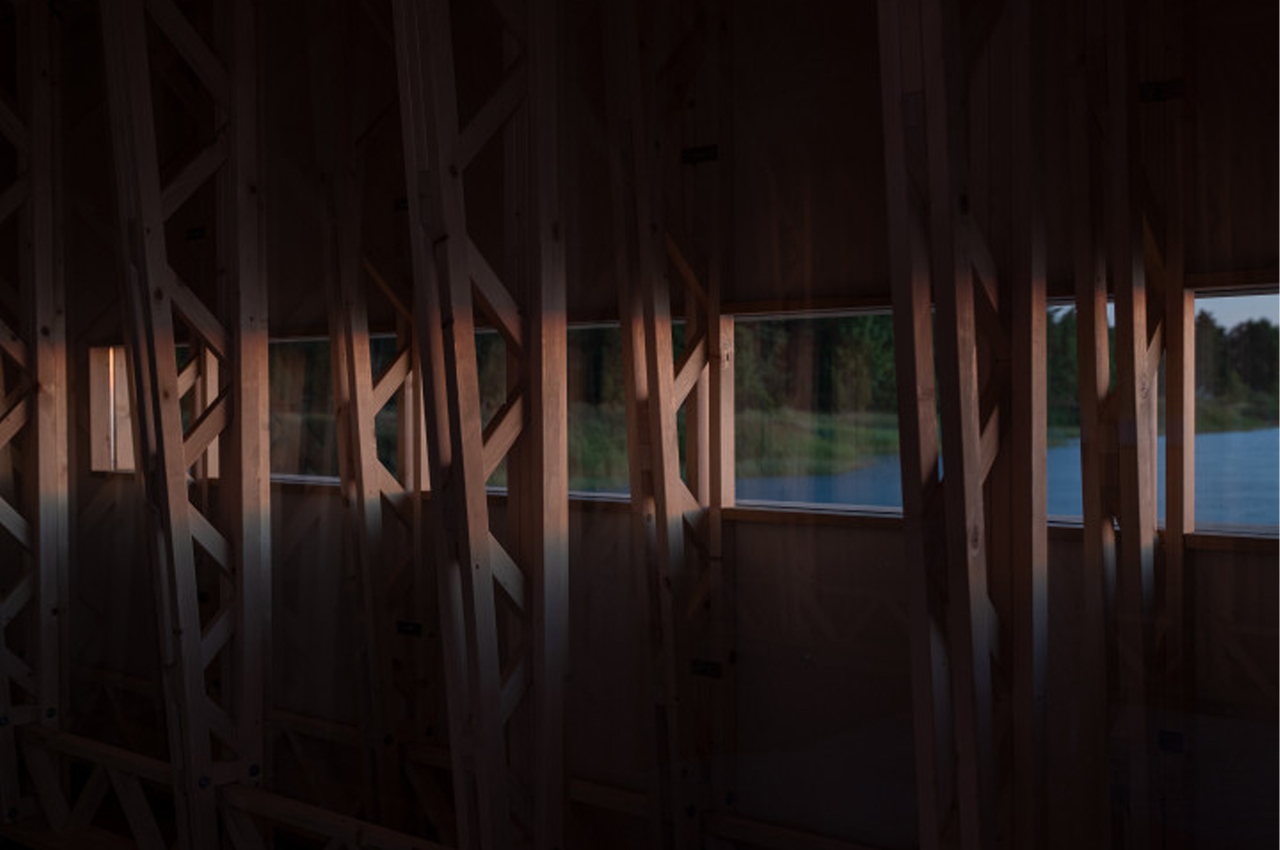 Cabin Anna is built with multiple layers of glass and wooden trusses, that peel away and slide back together when necessary or just for fun. 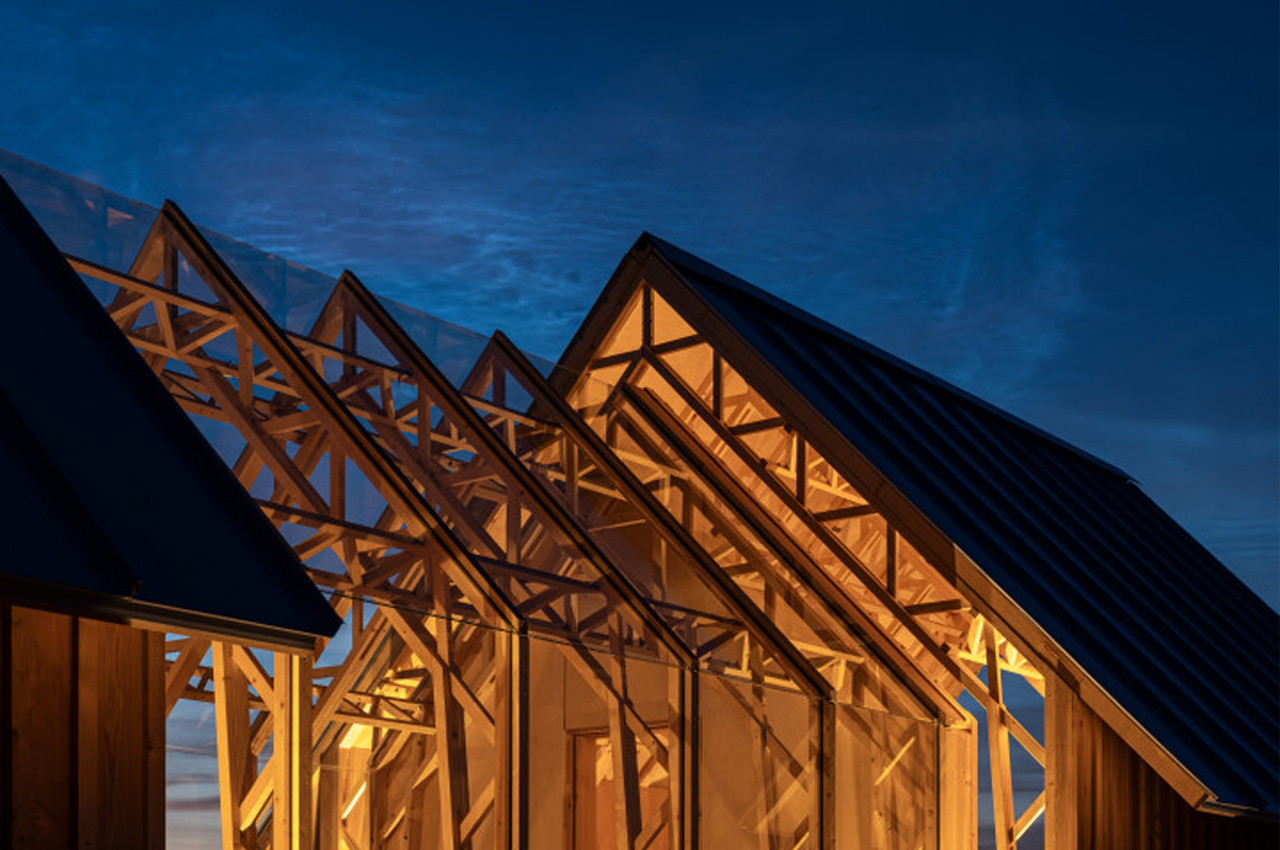 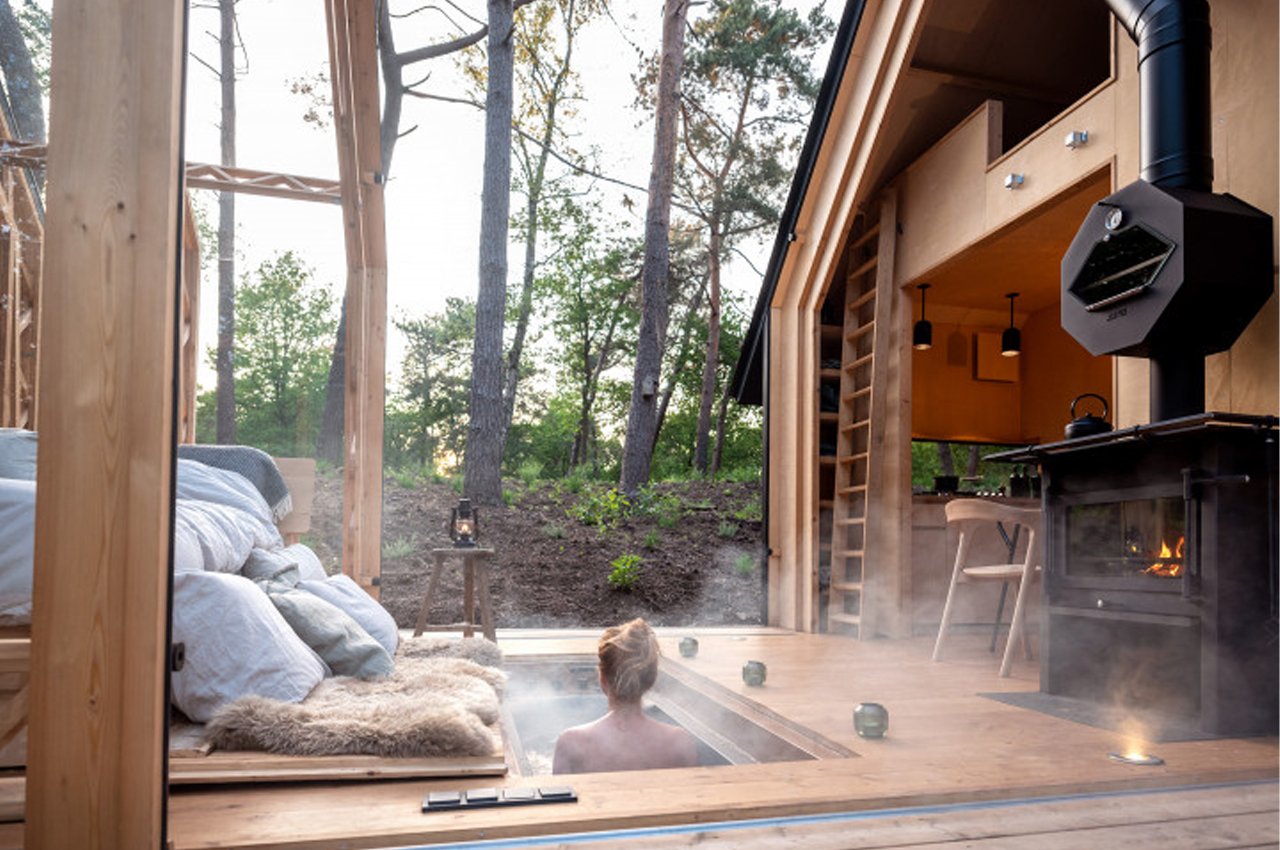 One of the many amenities included with Cabin Anna is a spa in the home’s center, where layers of the framework can peel away to reveal an exposed centerpiece. 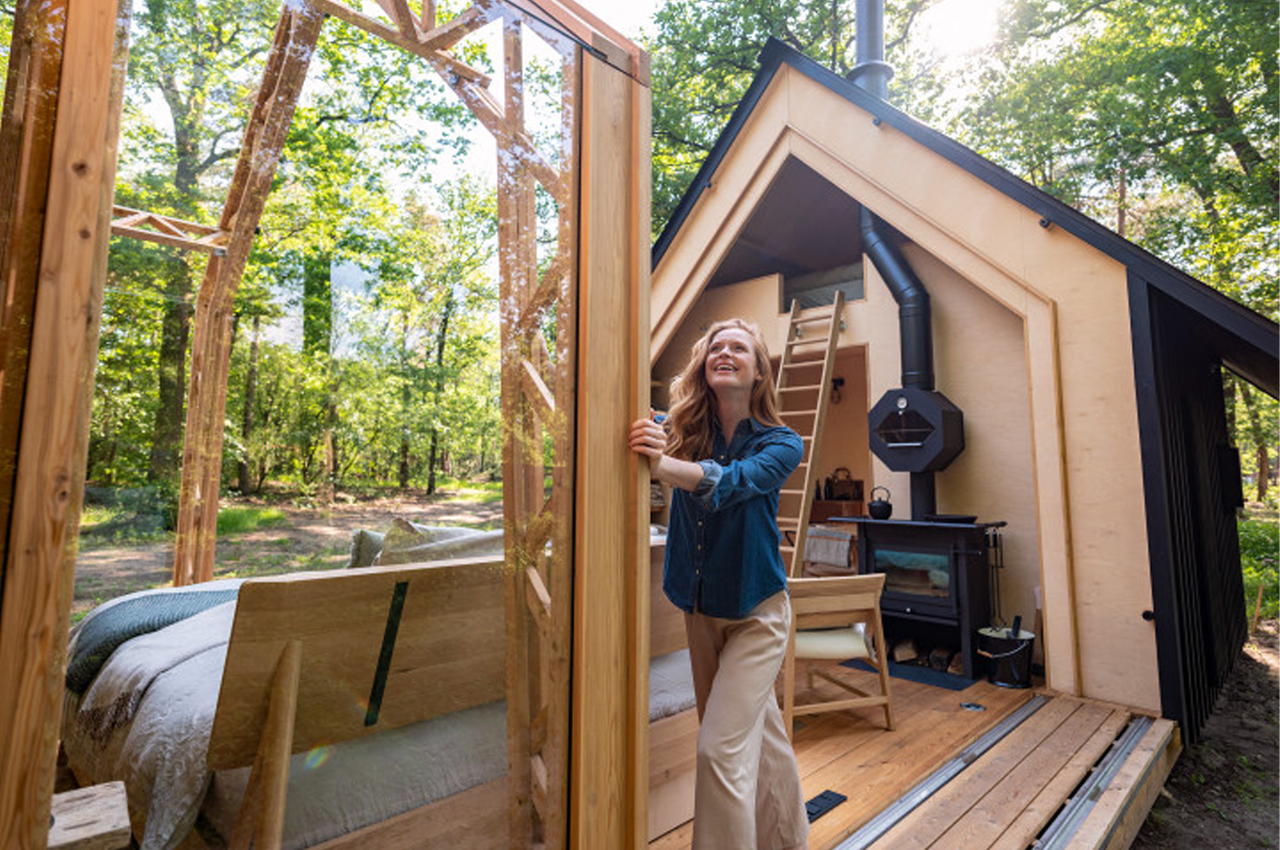 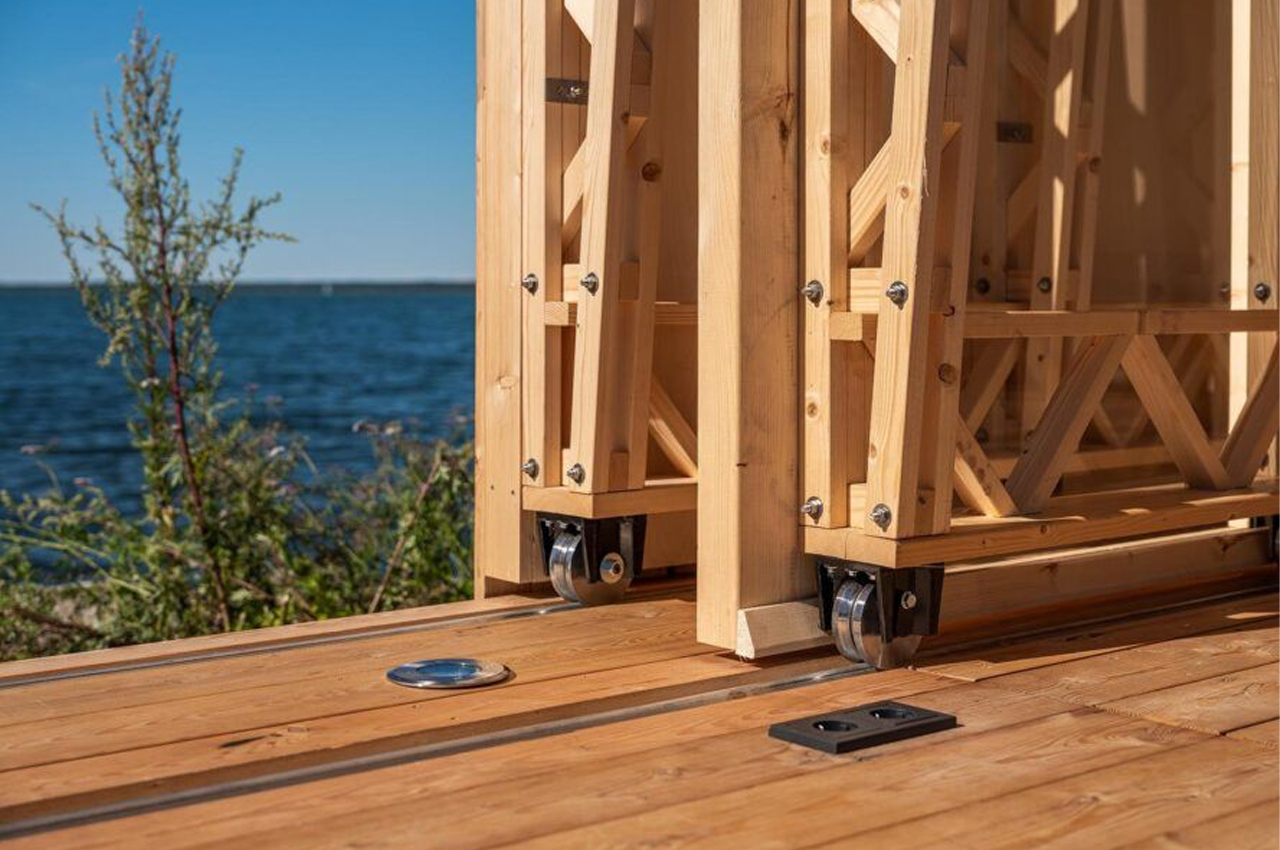 The guided support rails make it easy for residents to transform Cabin Anna all on their own. 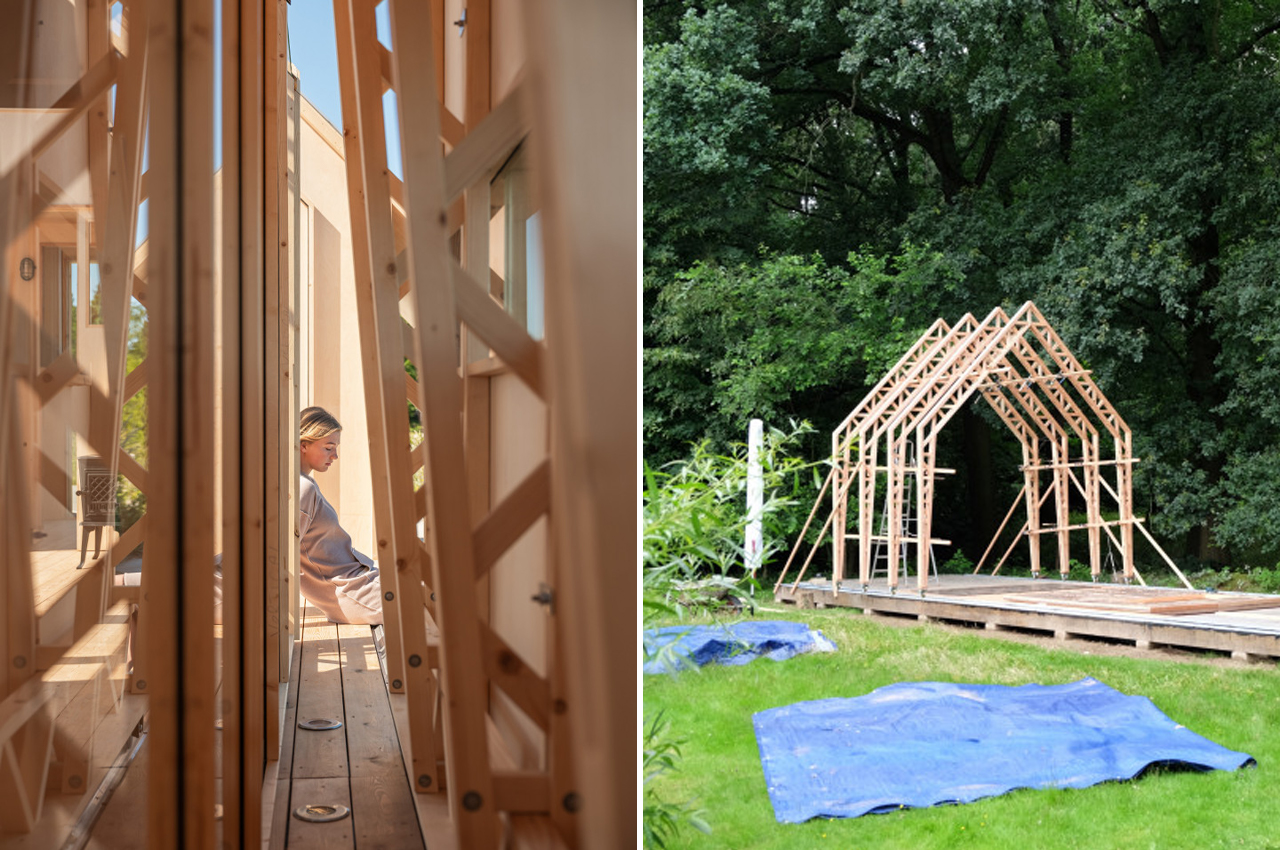 Beneath the frame of wooden trusses, Cabin Anna features a glass house that’s revealed once the wooden trusses slide on the support rails. 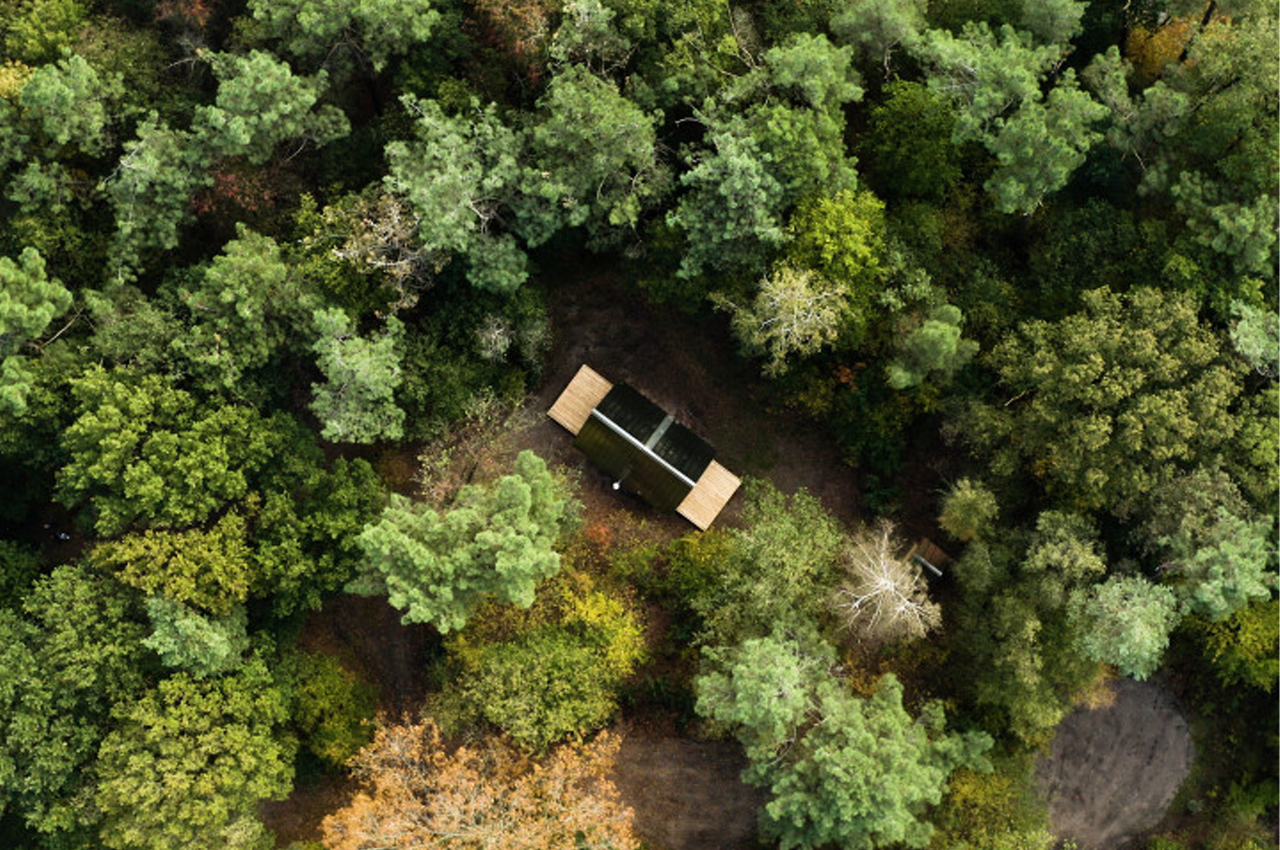 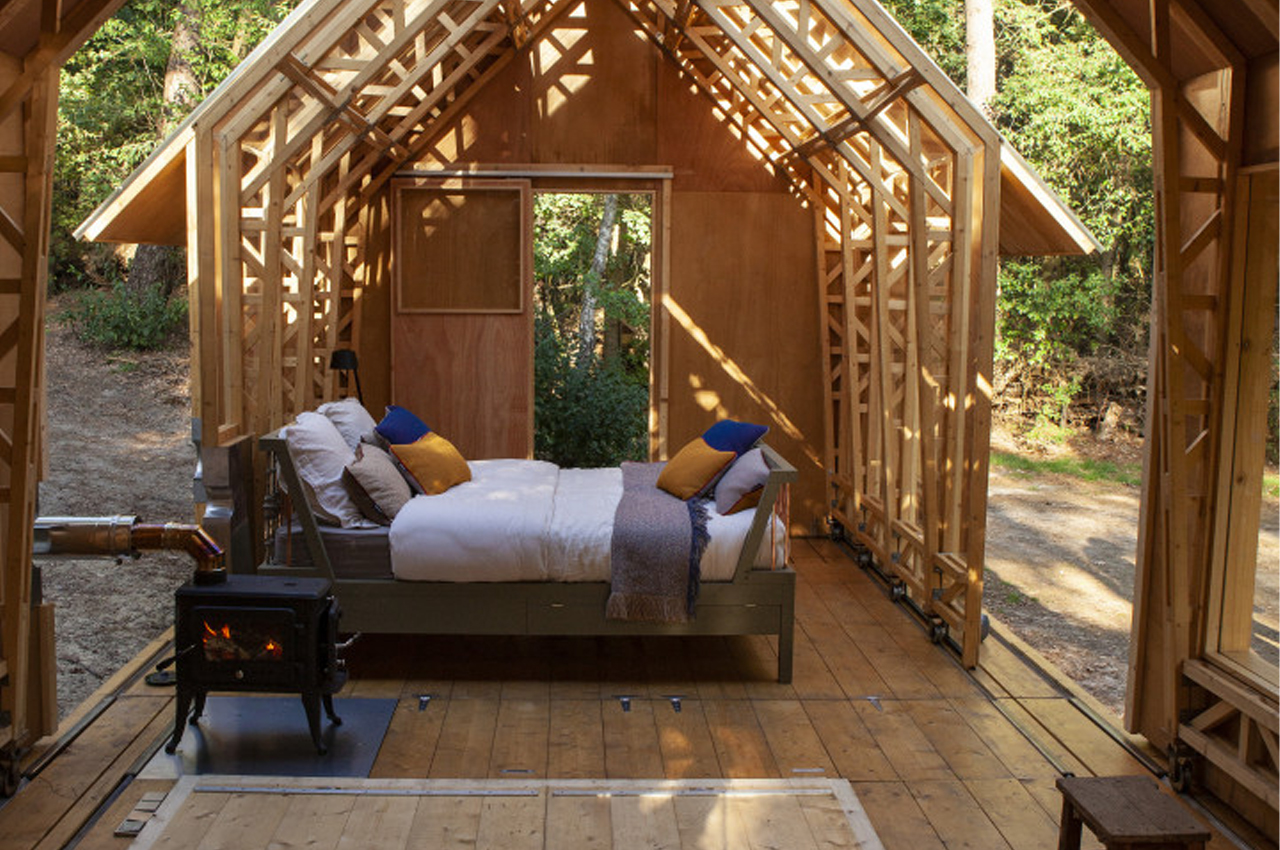 On warmer days, Cabin Anna’s centerpiece can completely open up to the outdoors. 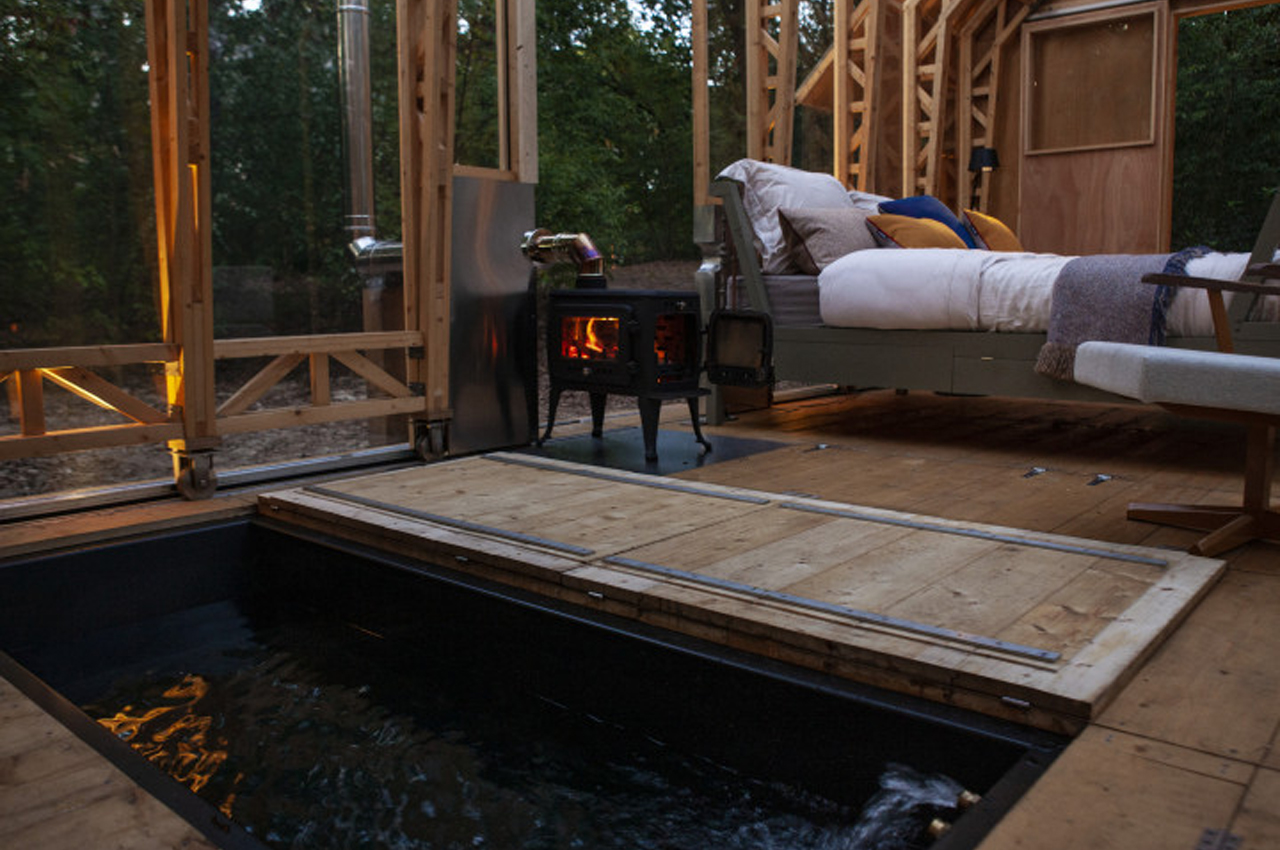