This Japanese architect’s fairytale teahouse covered in a grassy facade is topped with a yakisugi-treated timber loft! 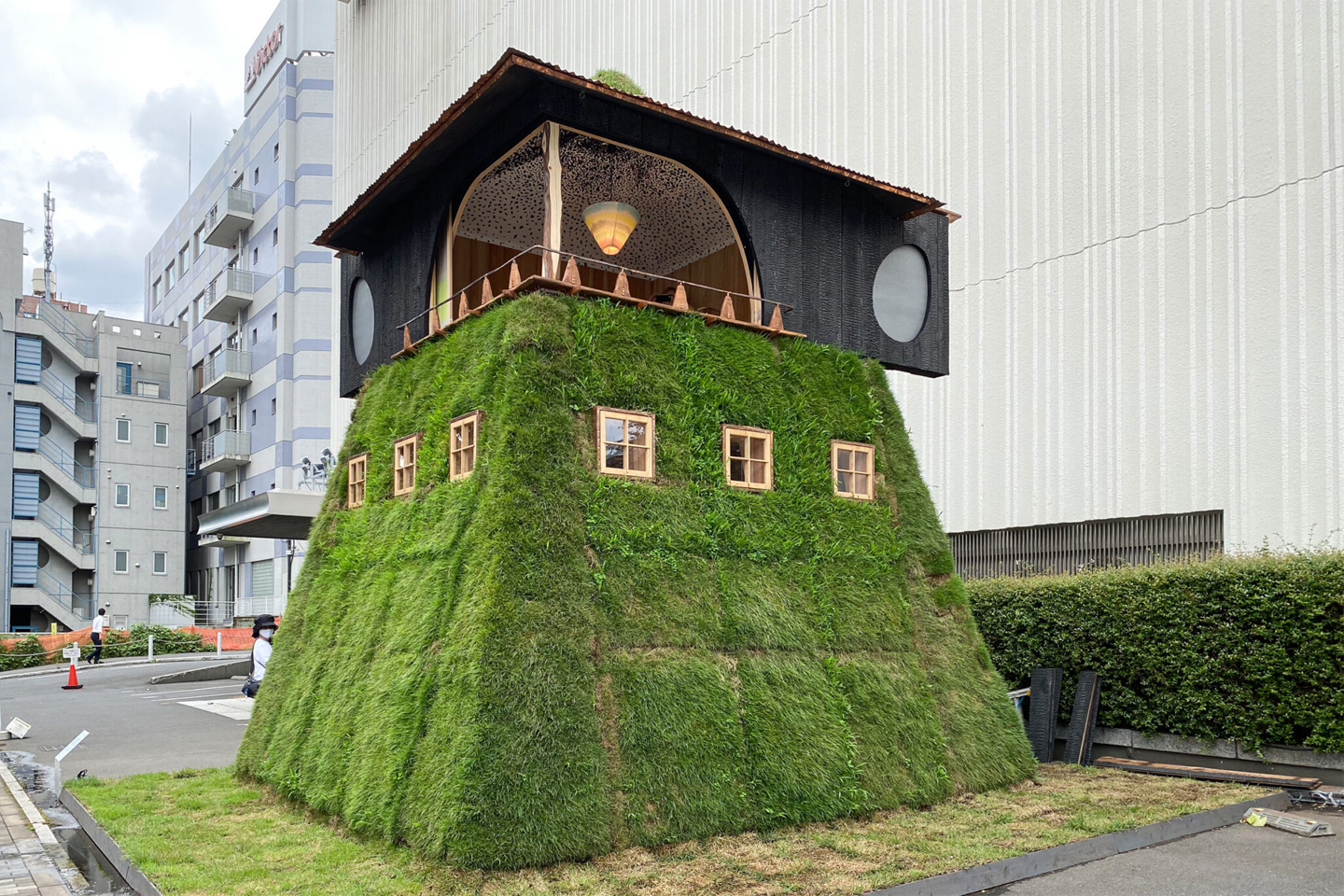 Japanese and architectural historian Terunobu Fujimori is known for his quirky and fondness for unusual city structures. His latest tea house transports an elf’s cottage from the pages of a fairytale to the concrete of Tokyo. Featuring grassy facades, timber treated with yakisugi, and a lofty vista point, the teahouse, called Goan, is sightly positioned in front of the new National Stadium of Tokyo where it remained until 5 September 2021 in celebration of the . 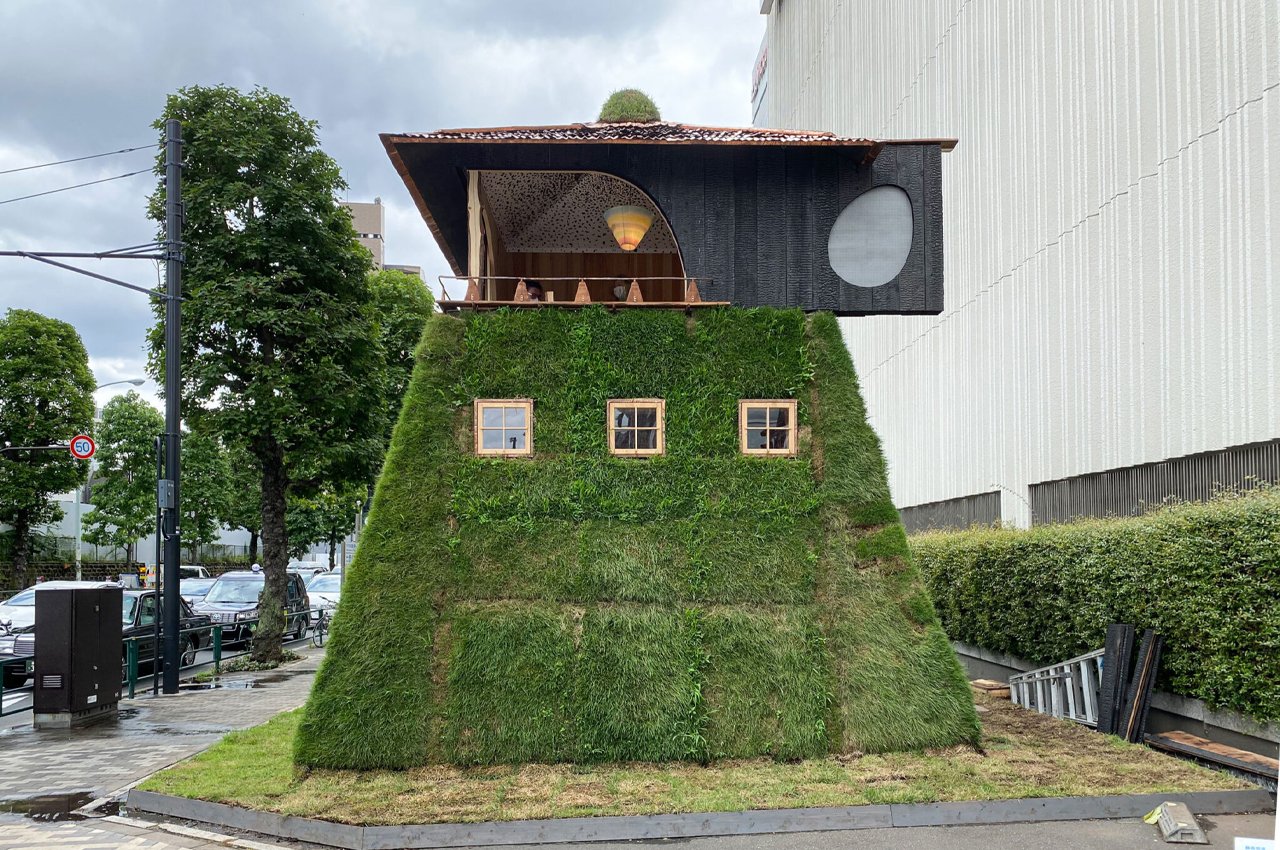 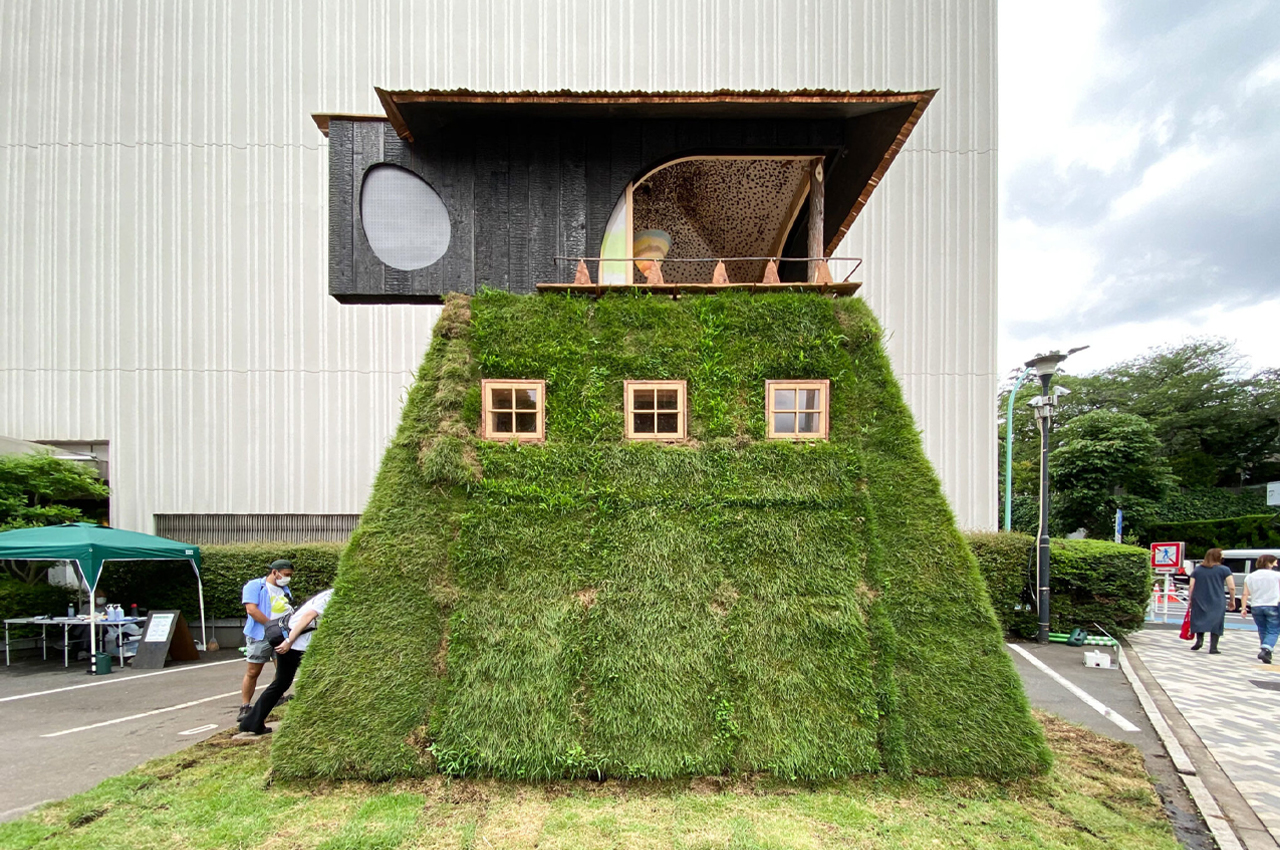 Poking out from the corner of one facade, visitors can crawl through a circular hole, traditionally known as a ‘Nijiriguchi,’ to gain entry to the tea room’s interior. Moving inside, visitors pass through the grassy exterior and are welcomed by an entirely unstained wooden first floor. Functioning as a reinterpretation of ‘Nijiriguchi,’ a small wooden staircase and ladder connects the bottom floor with the upper tea room. 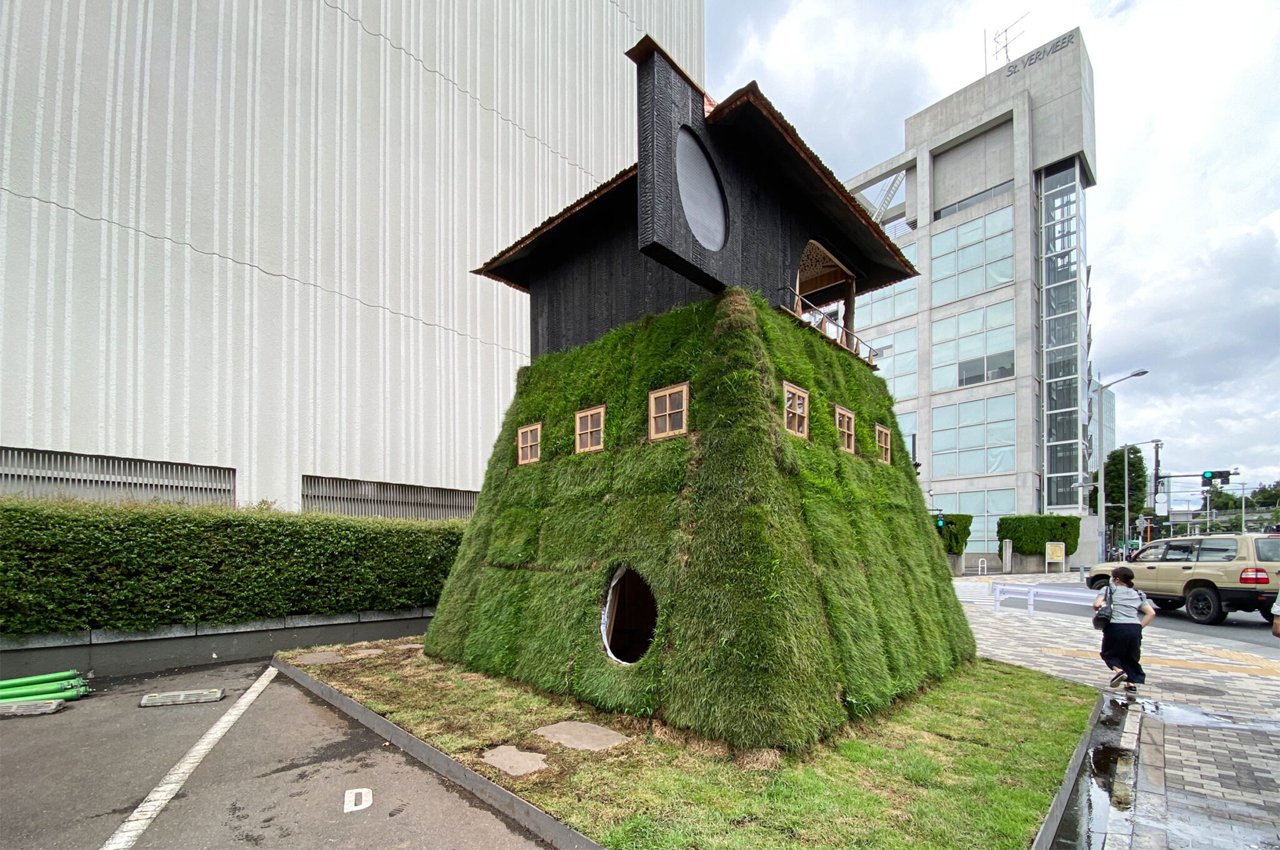 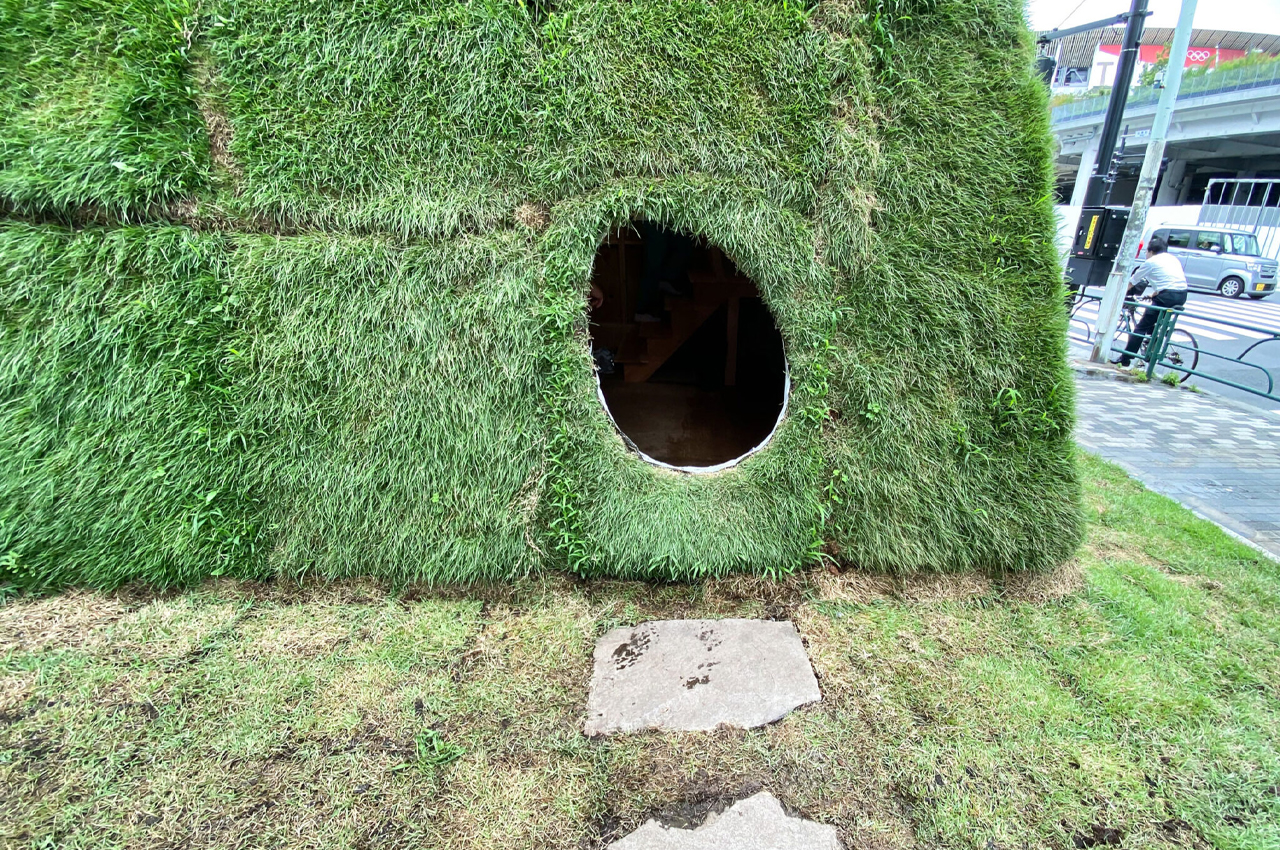 Upstairs, visitors can enjoy a cup of tea and a view of the National Stadium designed by . From the outside, the upstairs tearoom inside Goan is visually separated from the first floor with a timber exterior constructed from yakisugi treated wood, a traditional Japanese method of wood preservation. The tea room is swaddled in polished natural wooden panels and furniture, giving the room an air of organic warmth. 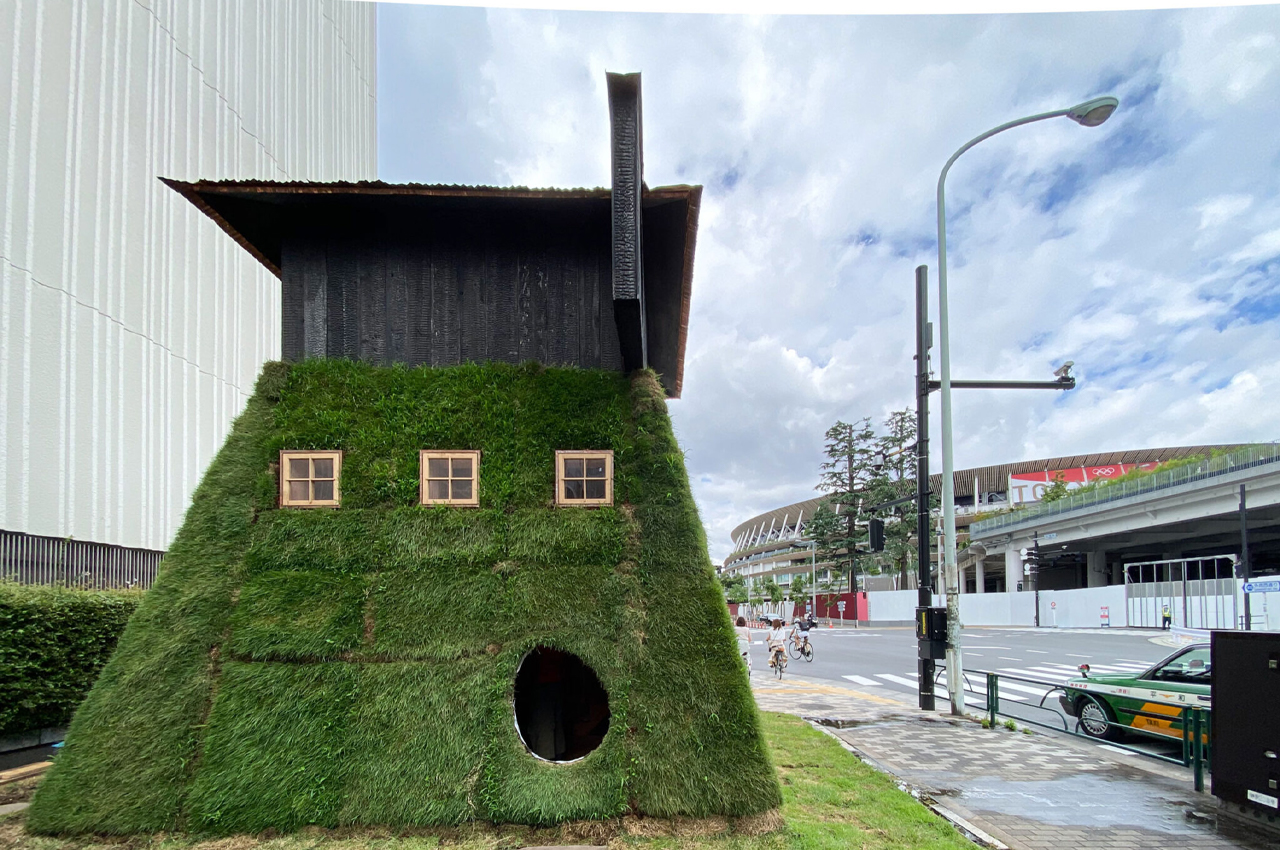 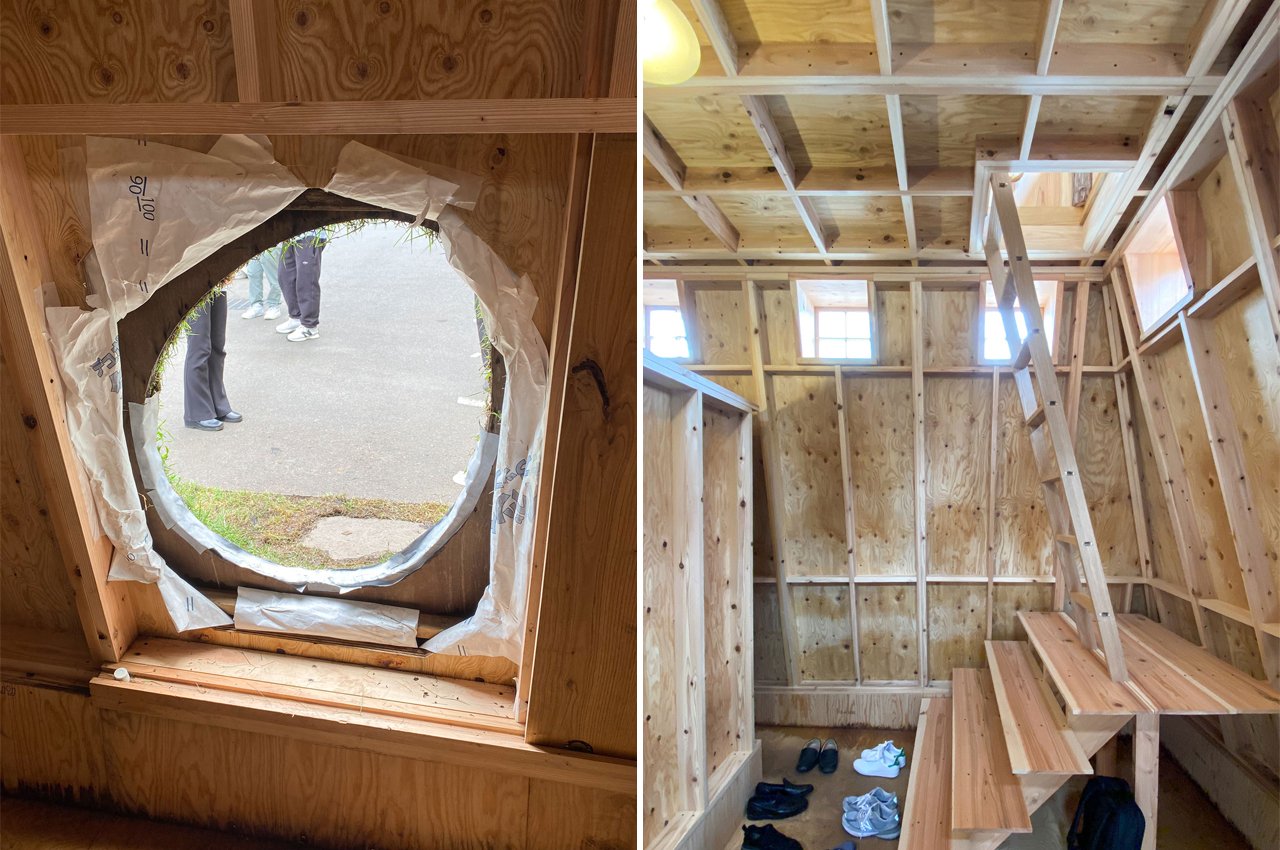 Standing as one of eight pavilions that are designed to showcase Japan’s future of urban architecture and art, the Goan Teahouse was installed as part of the city’s Pavilion Tokyo 2021 initiative. The initiative coincided with the 2020 Summer Olympics in Tokyo, where six world-renowned Japanese architects and two artists each designed a one-of-a-kind pavilion for fans of the games and city visitors and residents to enjoy. 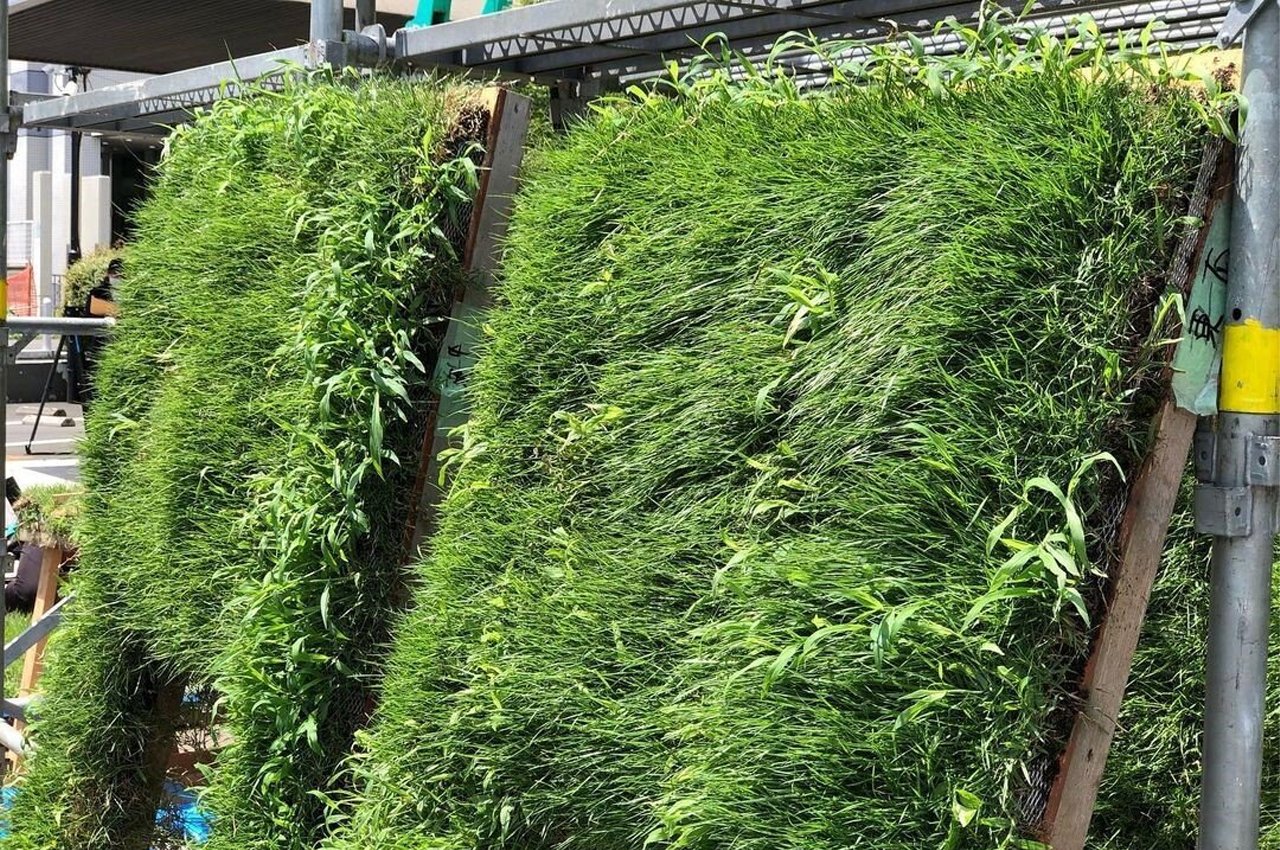 Plots of grass were used to cover the exterior of Goan, a natural choice for Fujimori. 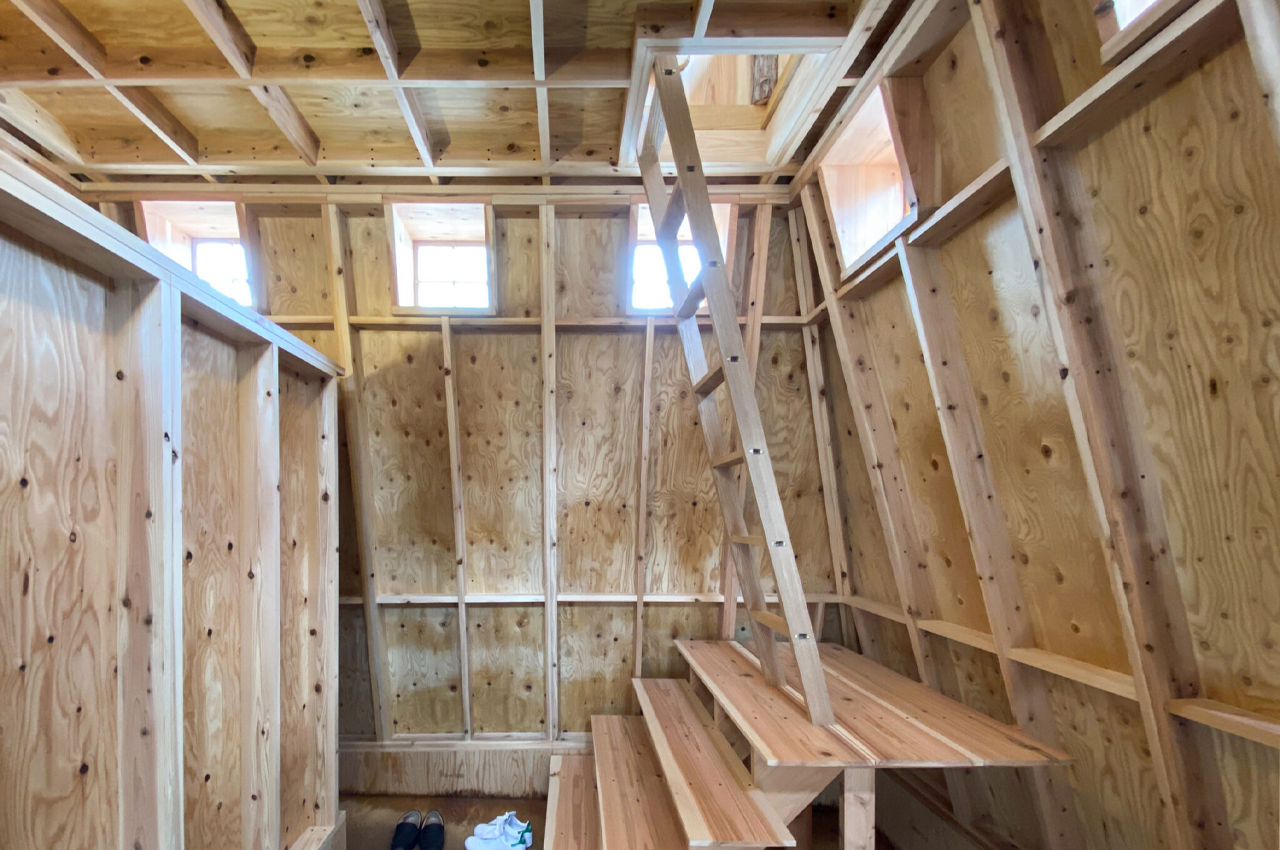 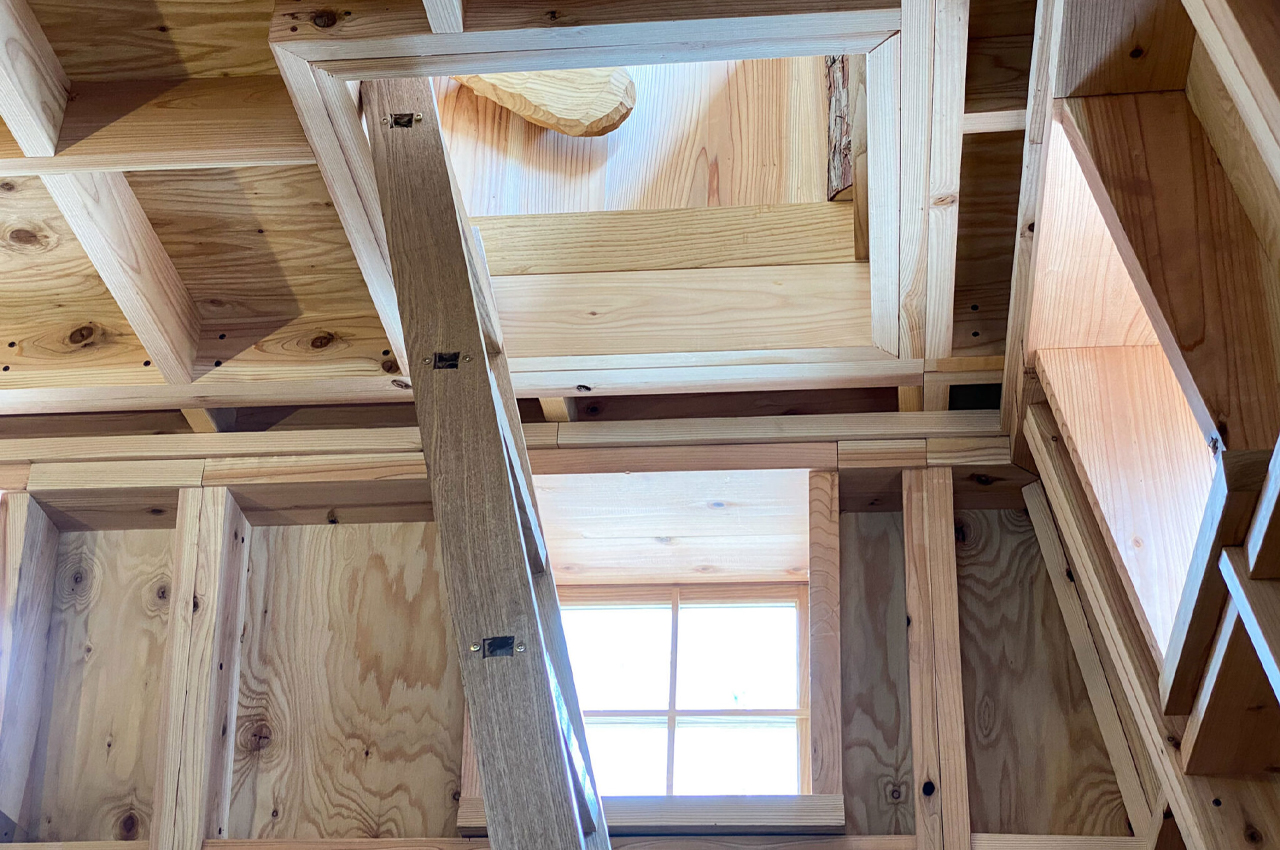 Inside, visitors access the upper tearoom via a wooden staircase and ladder, a reinterpretation of ‘nijiriguchi.’ 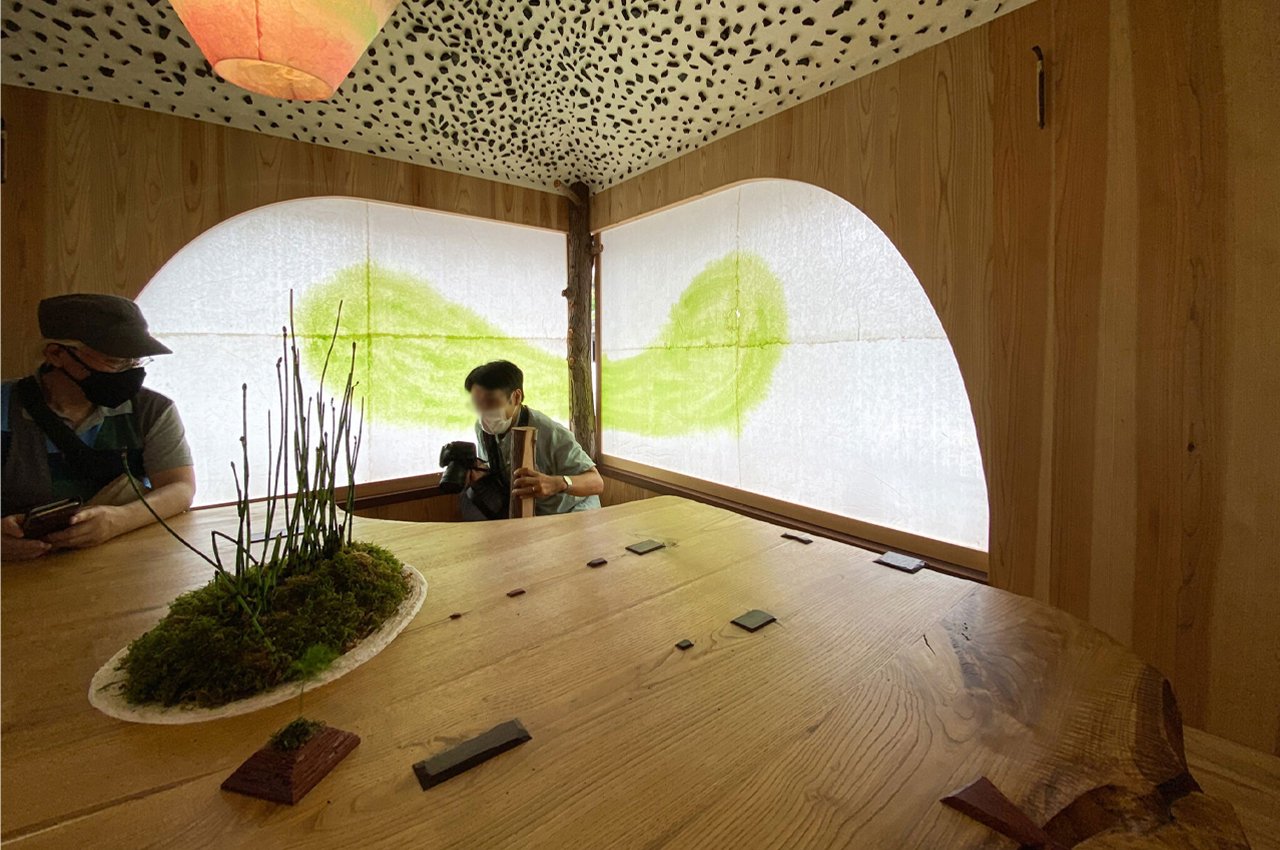 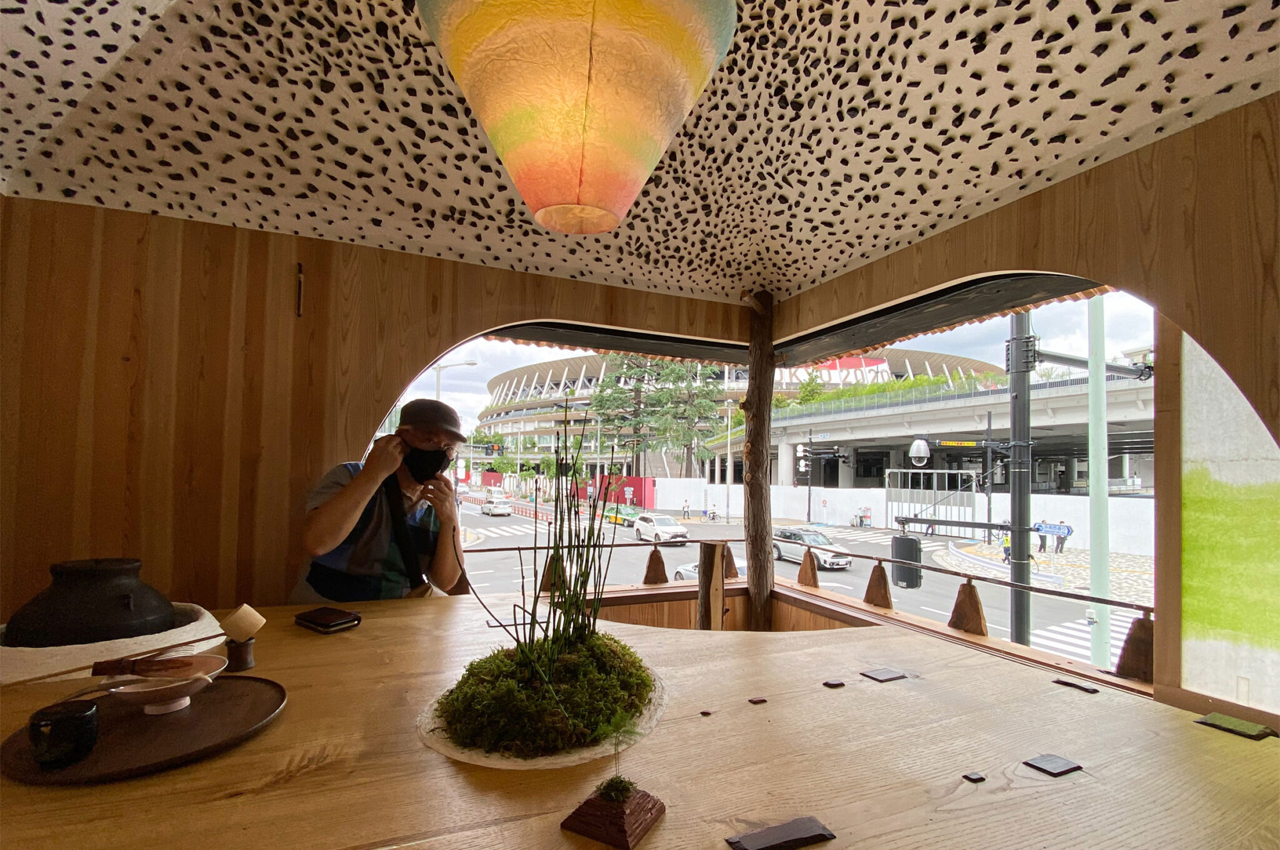 Upstairs, visitors can enjoy a cup of tea and city views inside a room decked out in polished natural wood.

The National Stadium designed by Kengo Kuma is a direct sightline from the upper vista point inside the tearoom. 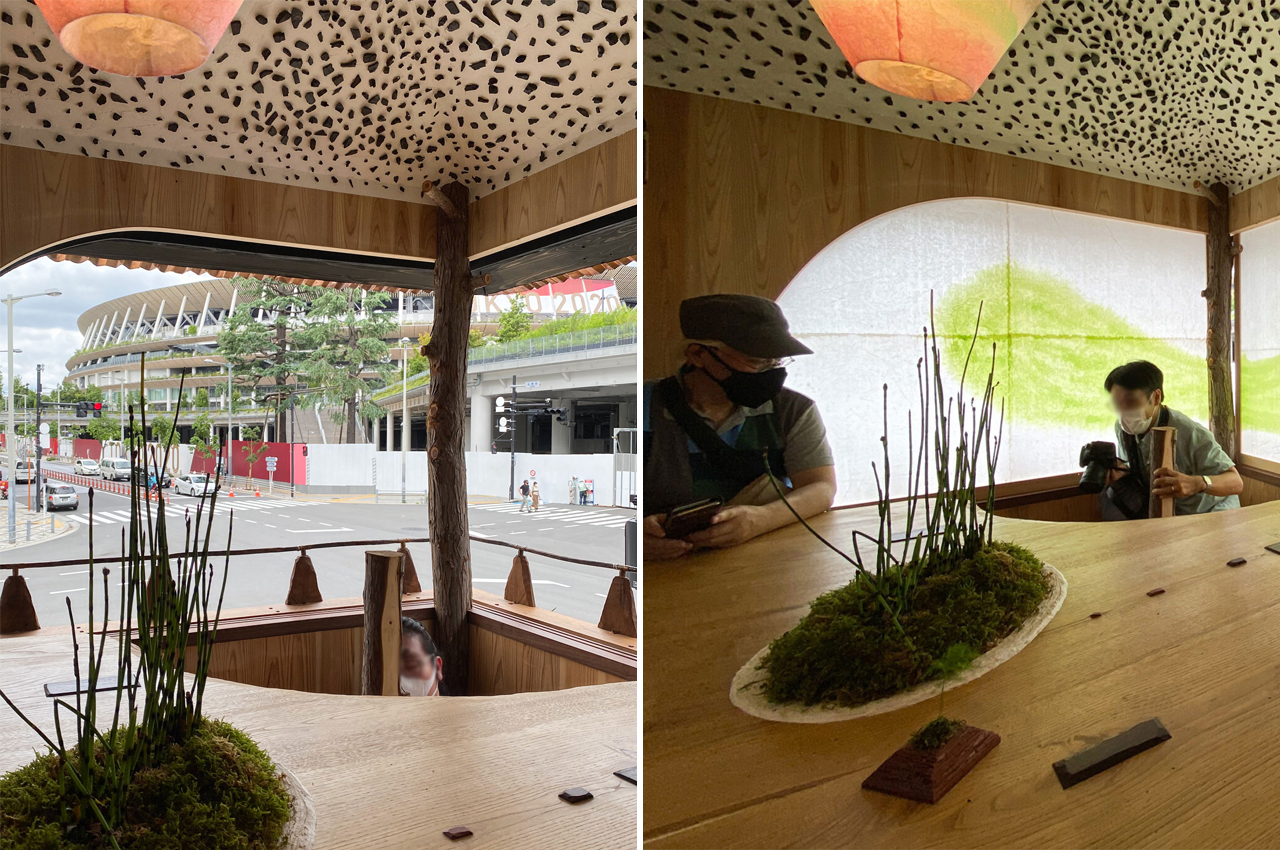 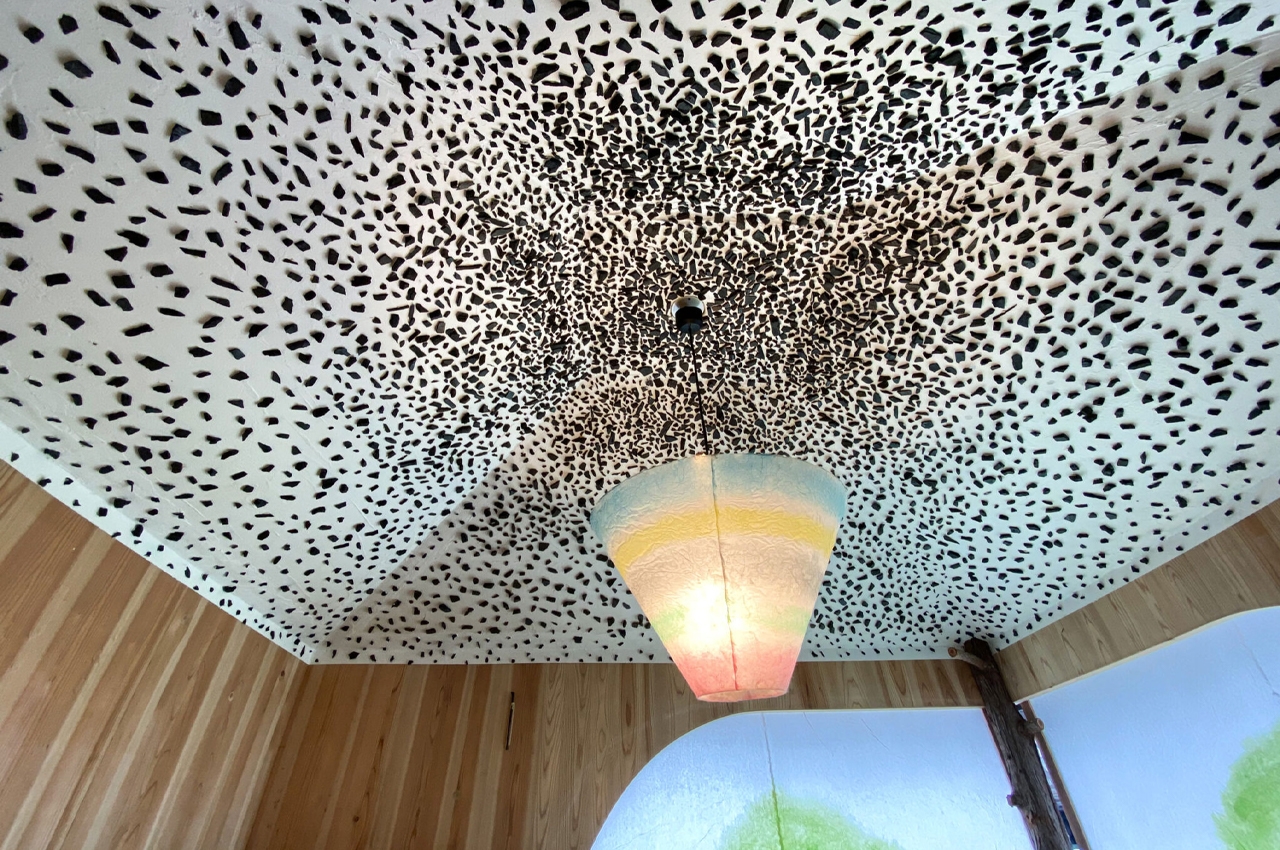 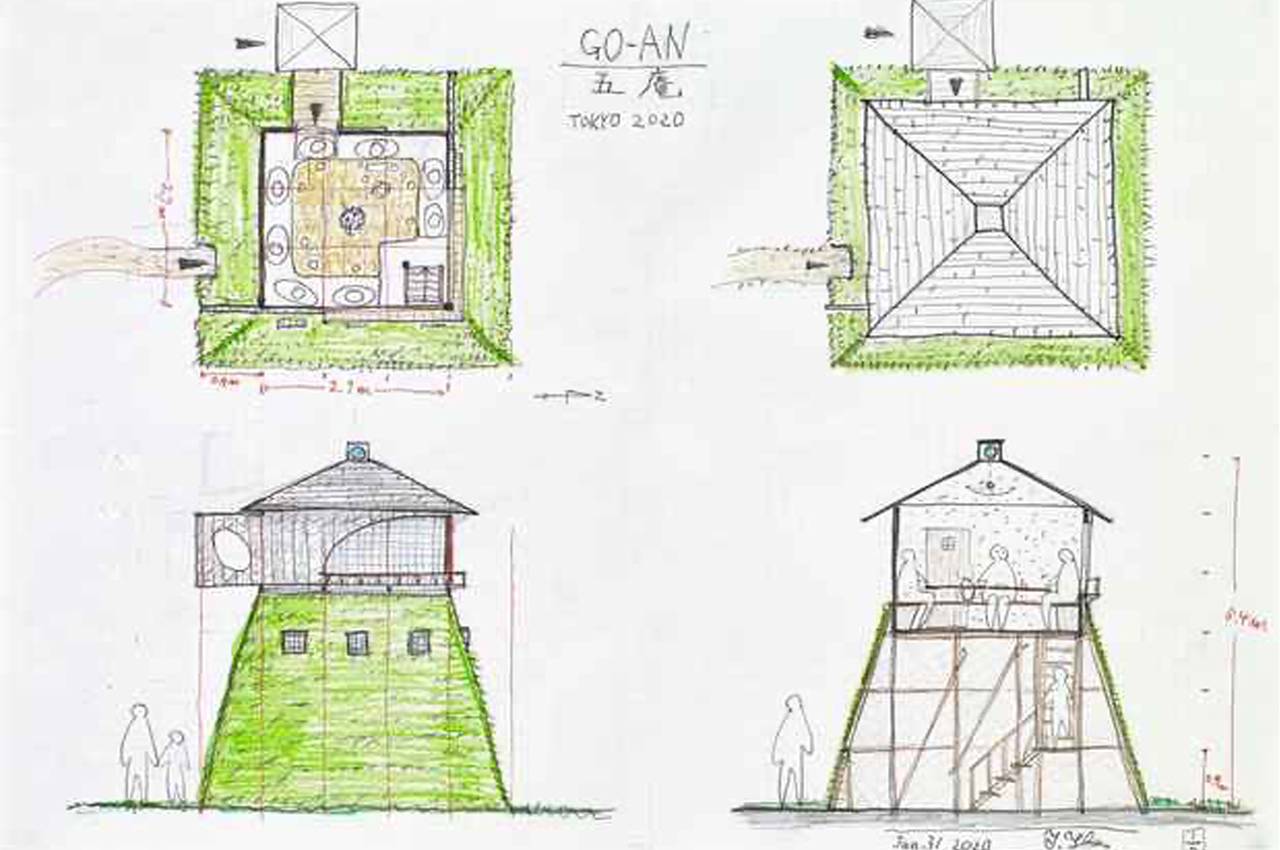 Fujimori’s plans for Goan are now on display at the Watarium Art Museum.