The 59th International Art Exhibition of is making a splash upon its long-awaited return. After a two-year hiatus due to the COVID-19 pandemic, the annual art exhibition is back on the scene with pieces representing artists and countries from around the world.

Consisting of a total of 200 artists from 58 countries, the Biennale was curated by Cecelia Alemani and is itself entitled “The Milk of Dreams.” The title draws its inspiration from the title of a book by surrealist artist Leona Carrington, which Alemani describes as being an exploration of “a magical world where life is constantly re-envisioned through the prism of imagination.”

Upon exploring the exhibition’s many poignant offerings, it’s easy to see why the imaginative curator landed on the theme. An eclectic mix of eye-openers and statement-making pieces, the often surreal and exploratory pieces of the Biennale speak to its global sensibility and penchant for pushing the envelope (and in some cases, dropping jaws with in-your-face, dreamlike artwork).

Below are some of the most standout pieces on display this year, running the gamut from fantastically nightmarish metamorphic mashups to stark depictions of reality that speak to the horrors of war and the power of resilience:

“We Walked The Earth” by Uffe Isolotto 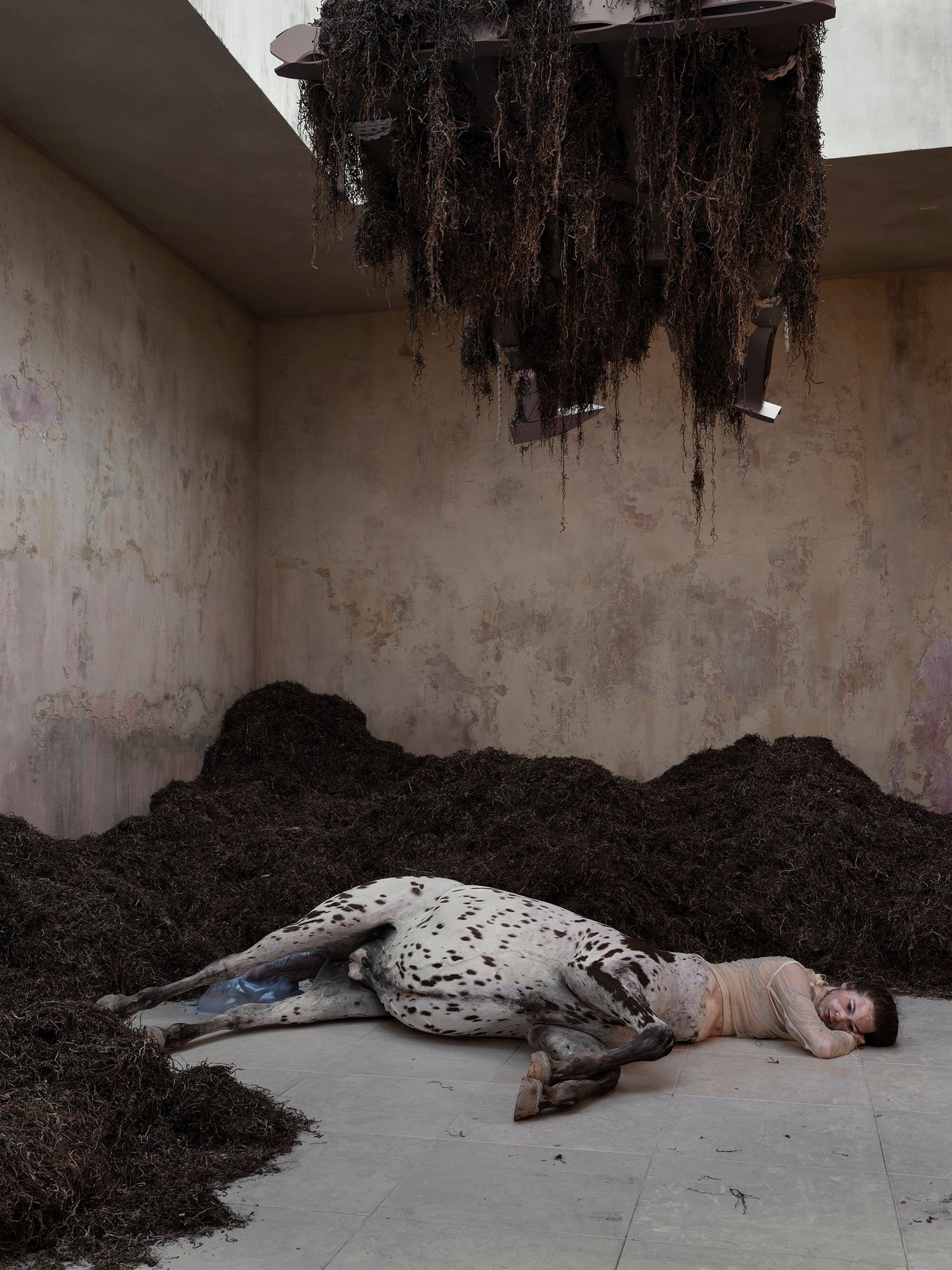 Occupying the entire Danish Pavilion, Isolotto’s piece is emblematic of this year’s Biennale and its surrealist namesake. Depicting a human/horse hybrid lying prone in the center of a stark, messy interior, the piece evokes the dramas of a transhuman world afflicted by the same cycles of life and death, hope and despair, that connect us all. 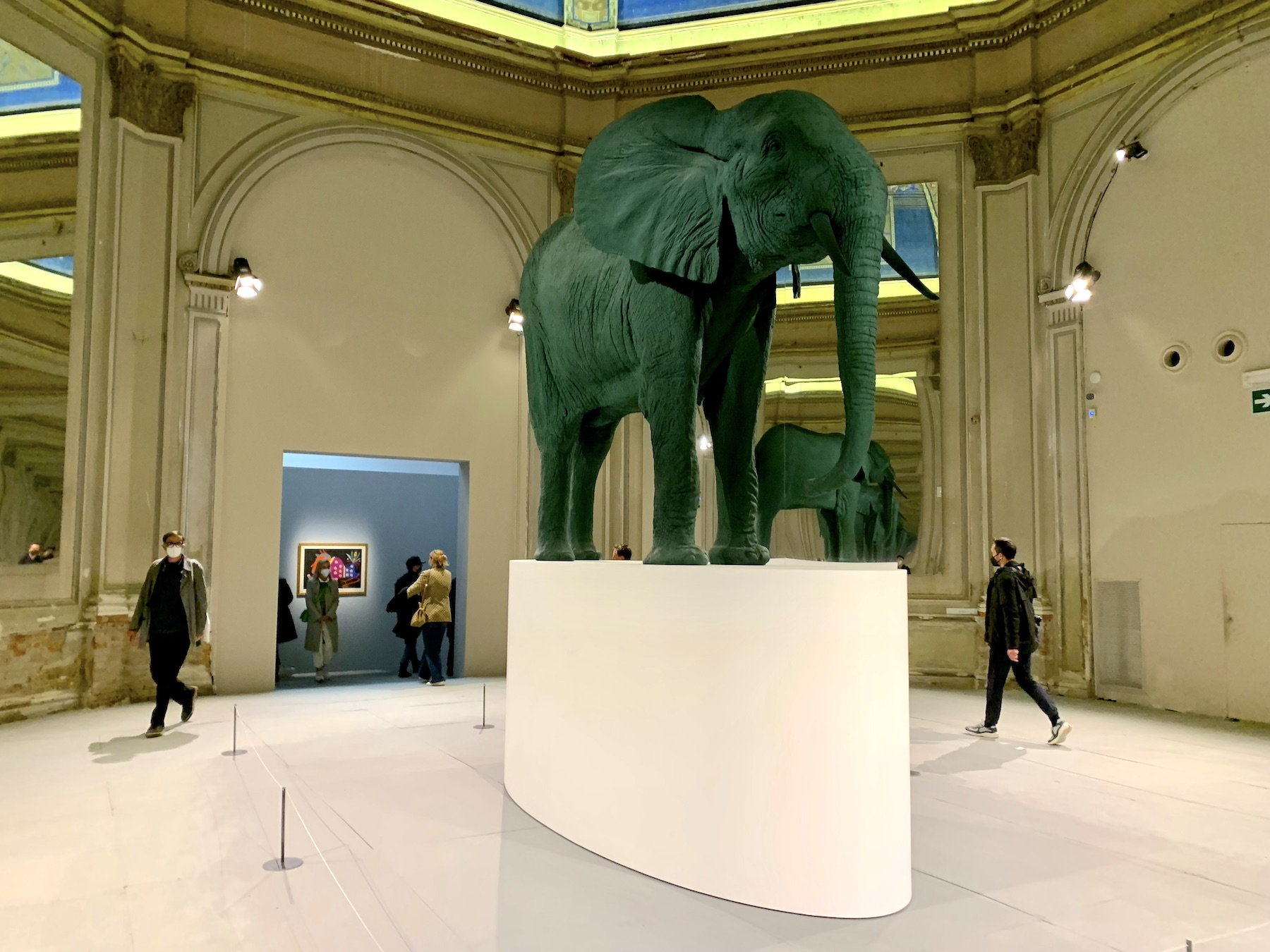 Larger than life and less fantastical than many of its counterparts, German artist Katharina Fritsch opted for size, grandeur, realism, and attention to detail on this piece. But that doesn’t make it any less impactful. Fritsch is also a co-recipient of the Biennale’s Golden Lion Award for lifetime achievement this year. 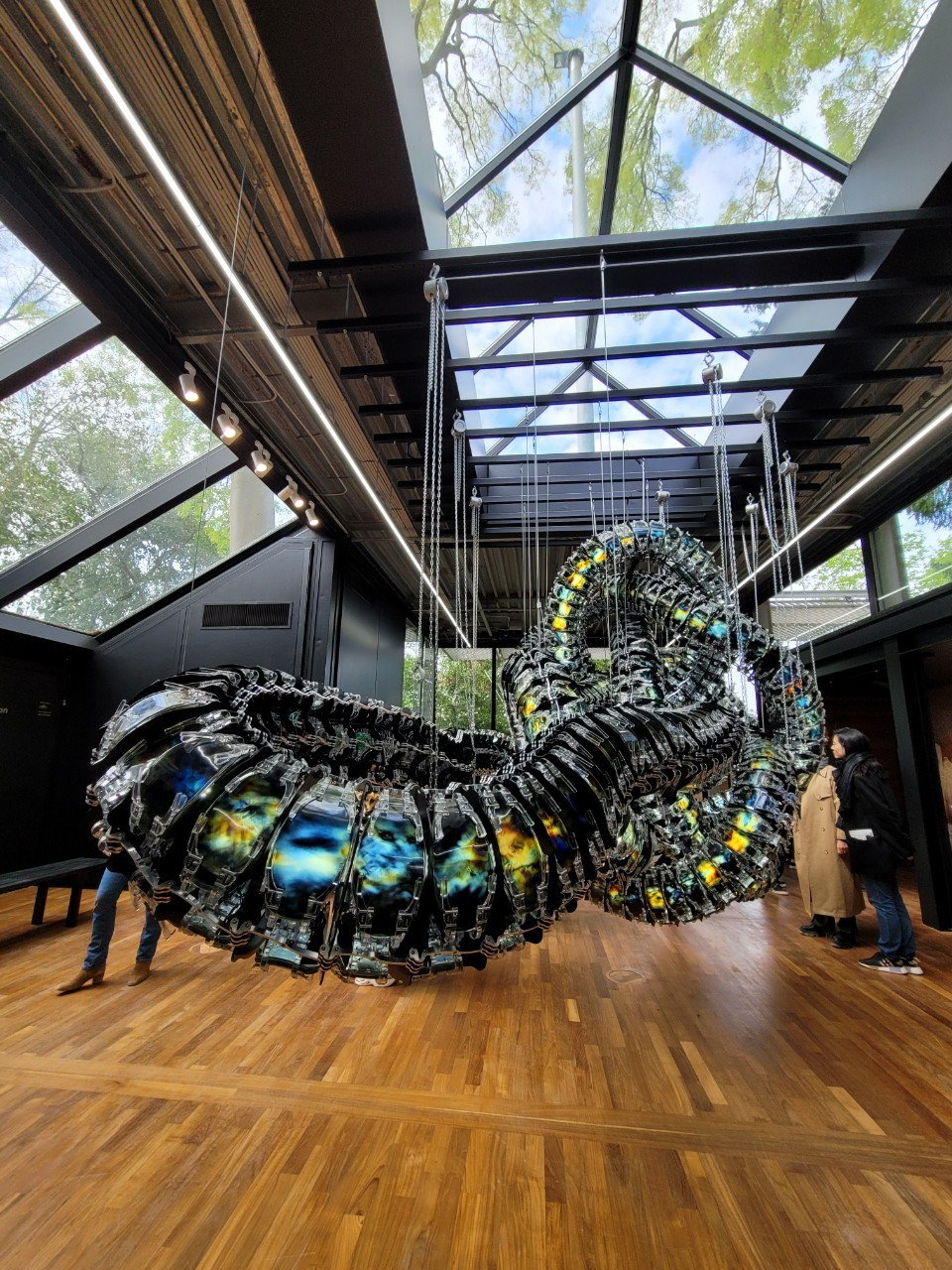 Stunning, silver, and described as “a sprawling body of entanglements” by its creator, this standout in the Korean pavilion is pseudo-realistic — a tangled up knot of fantastic proportions that doesn’t rely on animate objects and their relationship to the world, yet somehow evokes a feeling of movement with its twisty form. 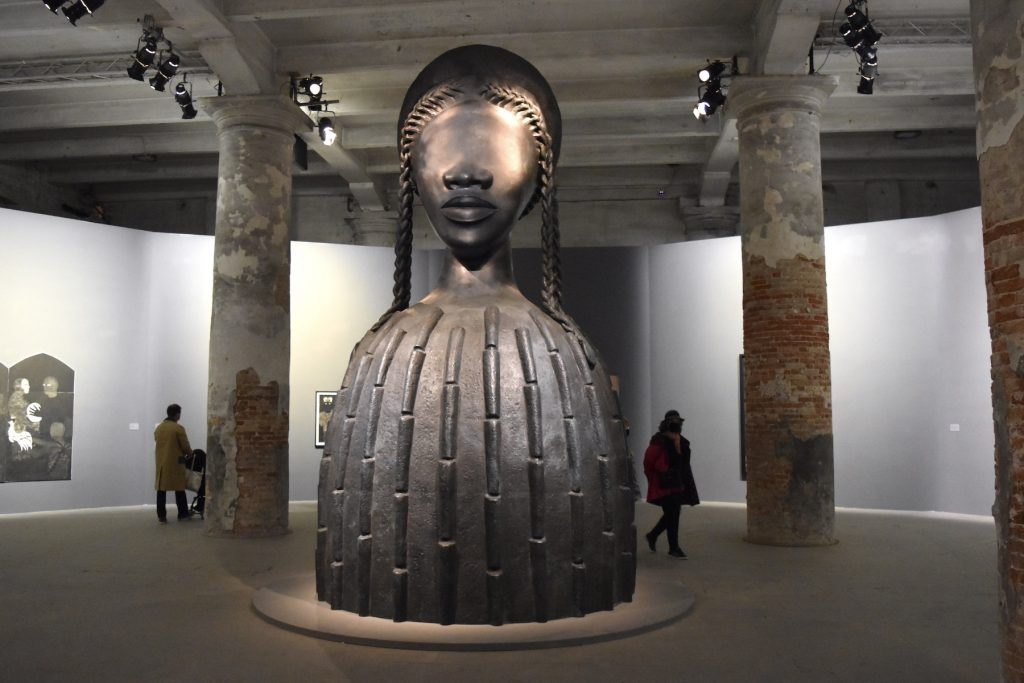 Formerly located in NYC’s High Line in 2019, U.S. artist Simone Leigh’s “Brick House” is a majestic bronze sculpture depicting an imposing figure that’s part Black woman, part house, “registering as a vessel, a dwelling, a space of comfort, and as a site of sanctuary…a Black woman’s body as a site of multiplicity,” says Madeline Weisburg. Leigh has also won a Golden Lion for her monumental and momentous sculpture. 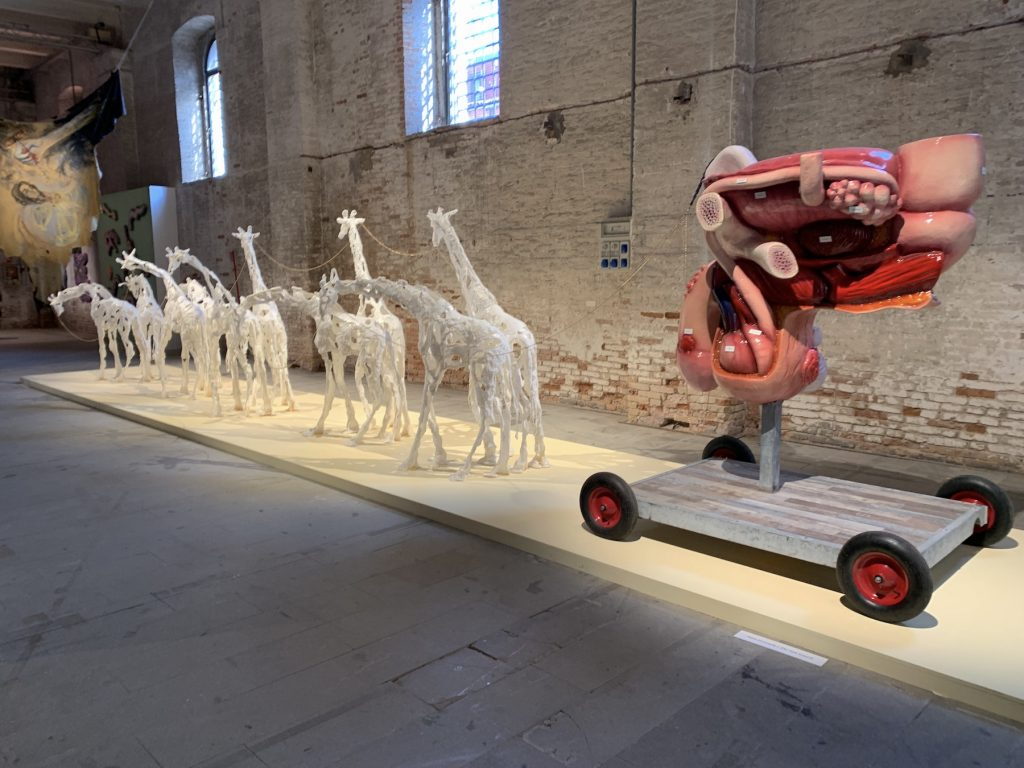 Vogel’s contribution was a jaw-dropper for sure — a perfect example of the German artist’s experimental repertoire, which often raises eyebrows with its metaphoric, sometimes metaphysical statements. Here, Vogel went for the shock factor, depicting a large, cartoonish model of a penis being pulled by a fleet of white giraffes, complete with explanatory plates describing various diseases and conditions like erectile dysfunction. Cartoonish? Yes. Shocking? Definitely. 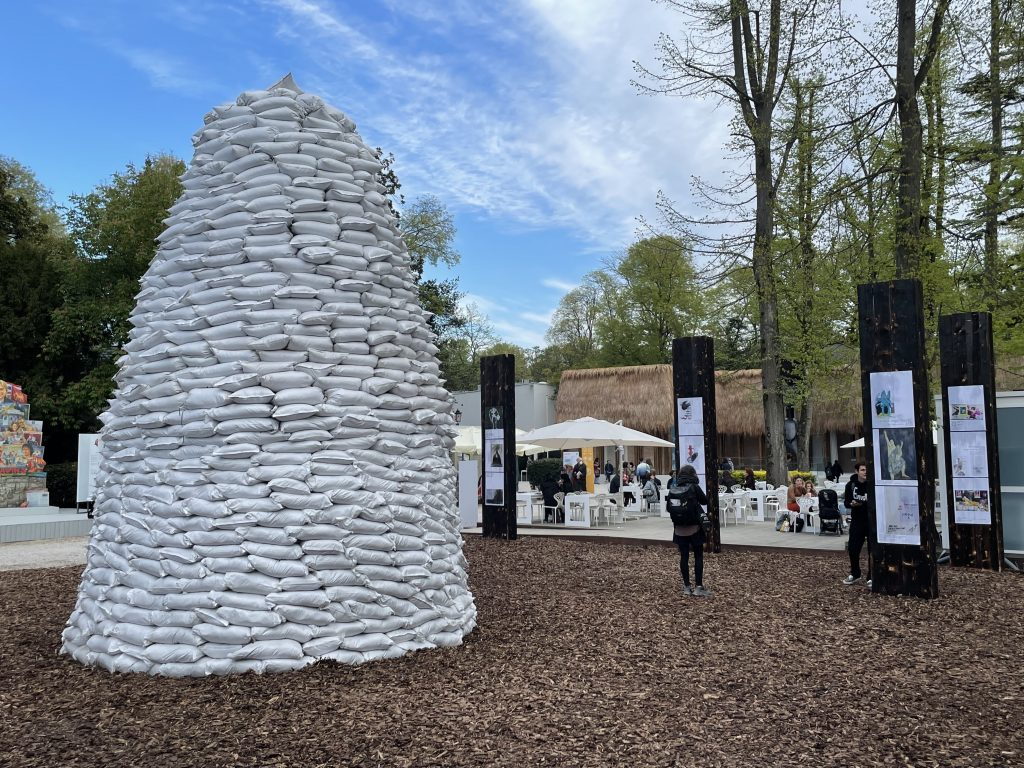 In referring to the Venice Biennale this year, Wallpaper recently said, “Stark reminders of a were never far from sight or mind,” and this is most evident in the centerpiece of the Ukrainian pavilion. A piece created by the pavilion’s curators, this stirring sculpture contains a multitude of stacked sandbags to represent the country’s efforts to protect their art from war damage — a reminder that’s both stirring and symbolic. Other notable Ukrainian offerings include “The Fountain of Exhaustion” by artist Pavlo Makov, which only arrived at the exhibition due to the perilous efforts of curator Maria Lanko to transport the piece beginning on the same day Russia began its attack. 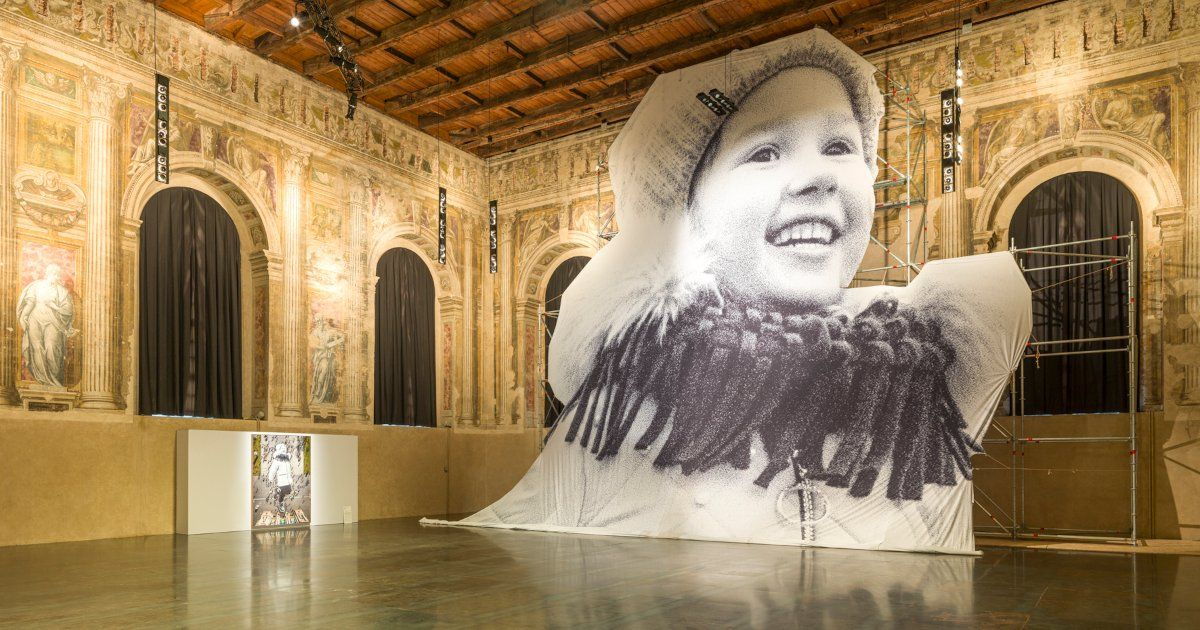 Statements and reactions to the war in Ukraine were not limited to the country’s own pavilion. French artist JR presented a large photograph of a young Ukrainian refugee in this statement-maker that puts a human face on the tragedies of war. It’s also been featured on the cover of Time and is part of the ongoing exhibition “This is Ukraine: Defending Freedom.” 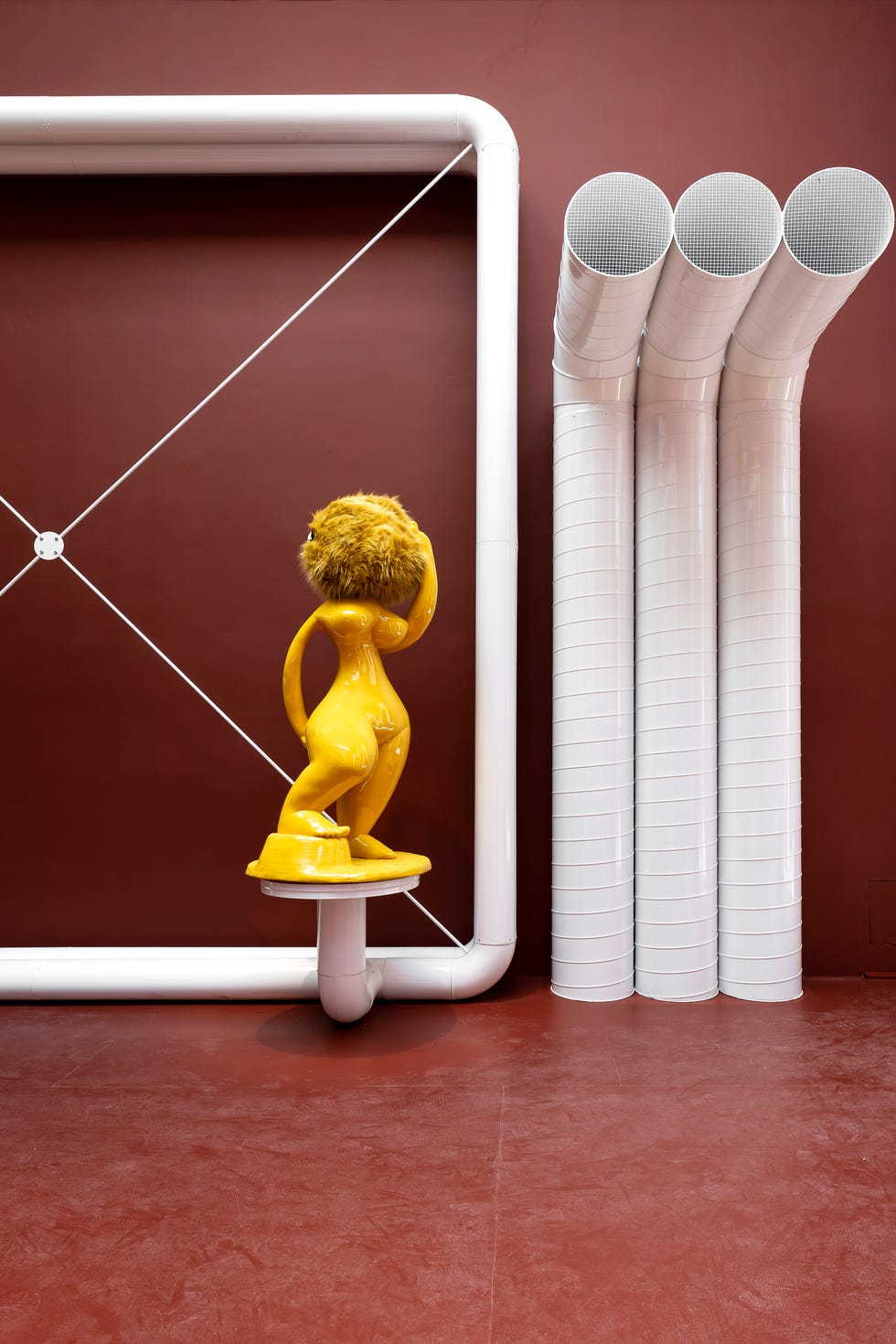 A curvy, faceless hybrid that’s equal parts sensual and unrecognizably recognizable, “Invitation…” is another potent representation that’s visceral and colorful, perfectly in keeping with exhibition’s central surrealist theme. Located in the Austrian pavilion, the sculpture is perched above the viewer on a plinth, presented as a figure to be worshipped and admired.

The Venice Biennale 2022 runs from April 23rd through November 22nd, 2022 at the Giardini and the Arsenale.