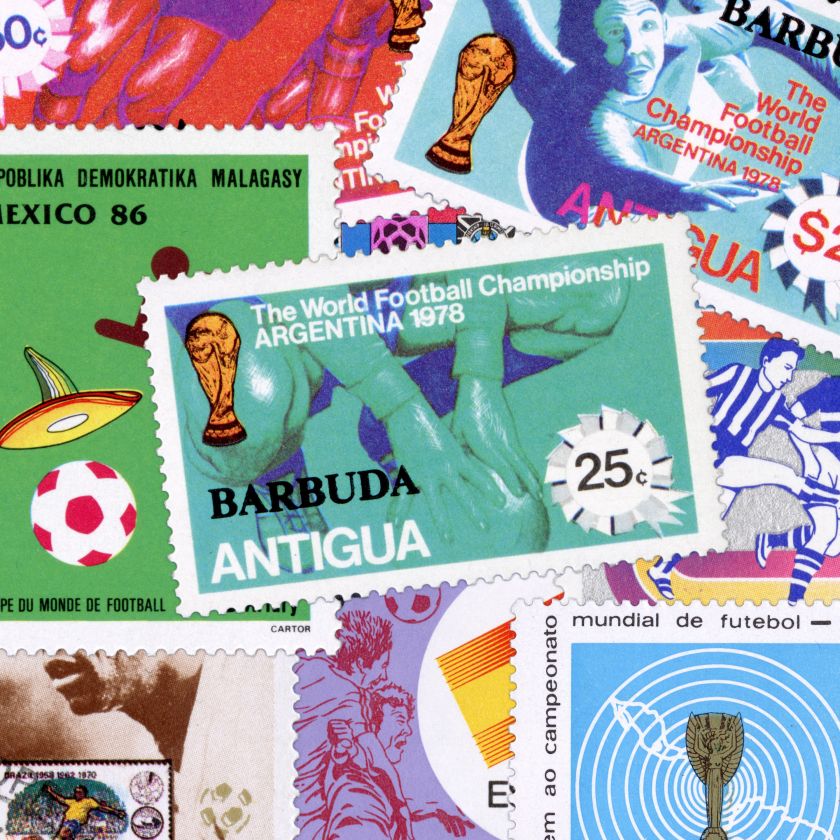 Have you ever heard of football stamps? Well, most people haven’t, even those who follow the game. And so and , two third-year graphic design students at Falmouth University, decided to do something about it.

“When you think of the graphic design surrounding football, you might think of the kits, badges, mascots and match programmes we’re all familiar with,” says Flynn. “But you might never think of football stamps. These stamps have been around for decades, being commissioned for most major footballing competitions, but for some reason remain unknown and under-appreciated.”

is a project celebrating the beauty of these mini artworks. “It celebrates the audacious colour palettes, the unique typography and the insanely detailed illustrations, contained only a small canvas,” explains Flynn.

The project focuses on the pair’s growing collection of over 500 stamps from various countries and competitions worldwide. “These stamps are small yet powerful pieces of art, capturing some of the greatest footballing moments from that point in time,” says Flynn. “We, as designers, understand the value that these small rectangles can hold and want to share that with as many people as possible.” 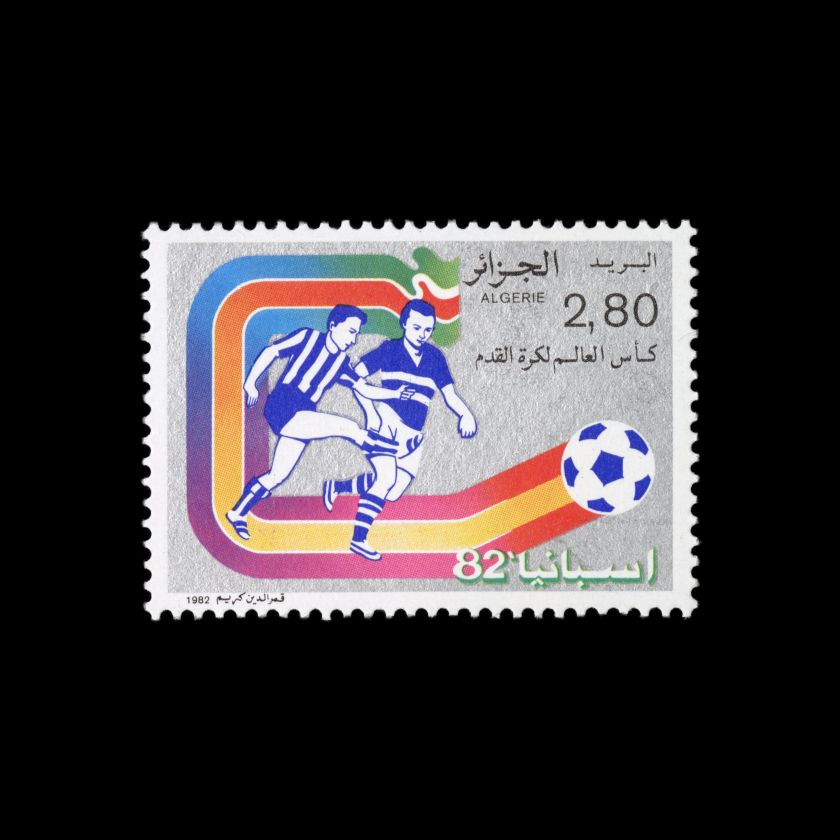 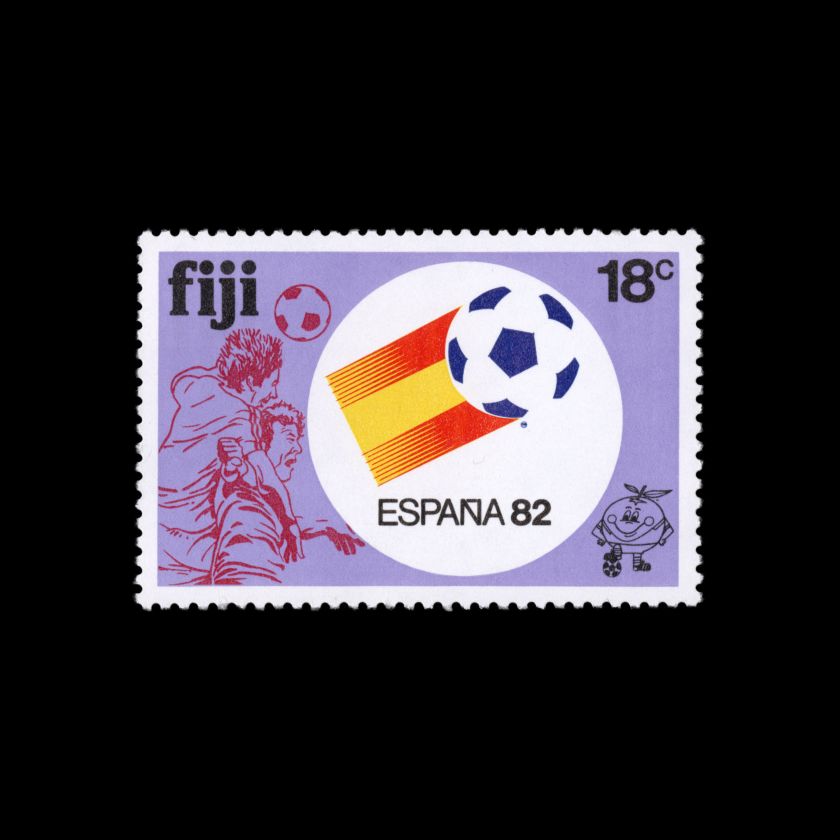 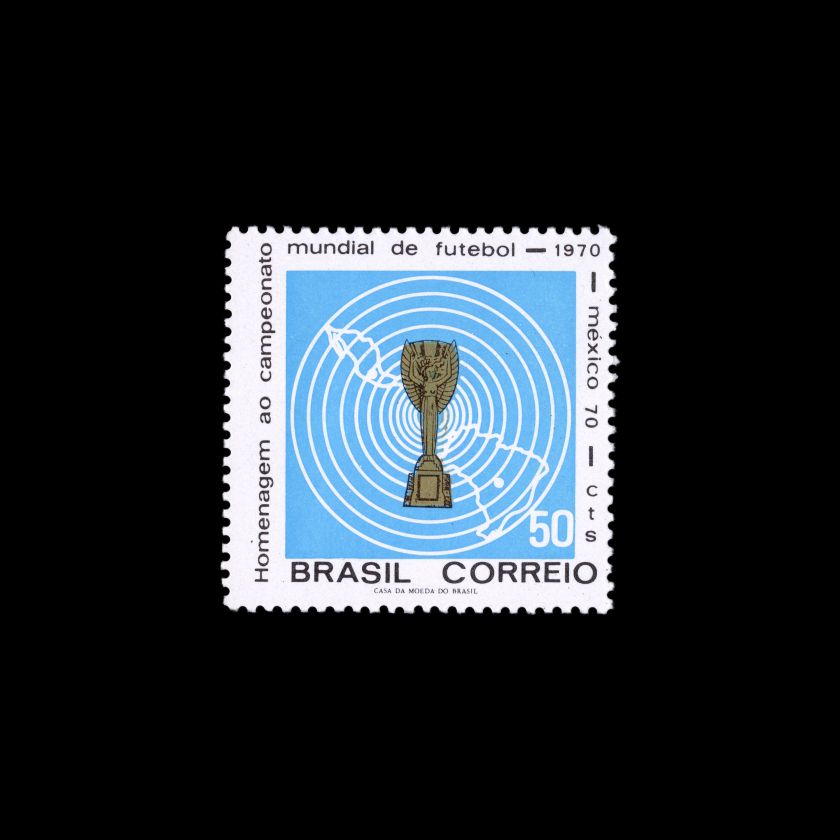 There’s an dedicated to sharing and archiving their collection of football stamps, and Flynn and Ollie are currently in the process of designing a publication to further celebrate these tiny marvels. We chatted to them to learn how they got started, why football stamps are fascinating from a design point of view, and which stamps tickle them most of all.

How did you first find out about football stamps?

Flynn: A few months ago, I bought a Maradona-themed espresso cup, and it started a bit of a love for trawling through eBay and Facebook Marketplace for random football ephemera. It was soon followed by a 1994 USA World Cup mug and matching tee.

The love for this became a uni project for both of us, looking at football memorabilia and the role they have in the sport; I think Ollie even bought a Liverpool landline at one point. This was when we stumbled upon football stamps. There was a listing on eBay of 100 football stamps for only £5, which had us intrigued, so we bought it. What arrived was a wallet of interesting and beautiful artworks from across the world. The project changed direction from there, essentially turning ourselves into stamp collectors and eventually starting Top Corner. 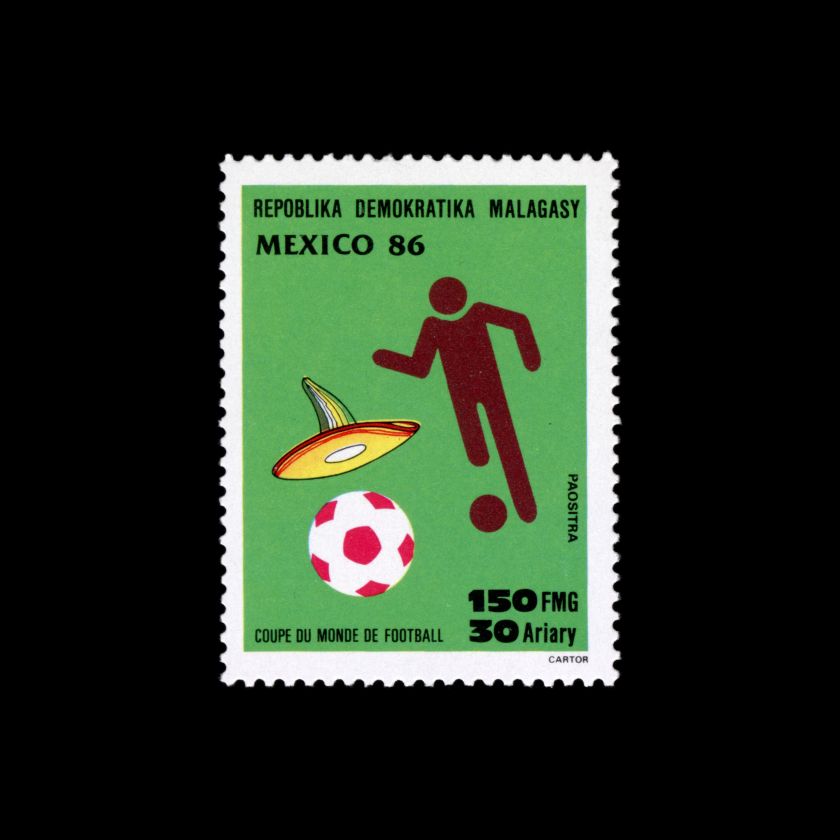 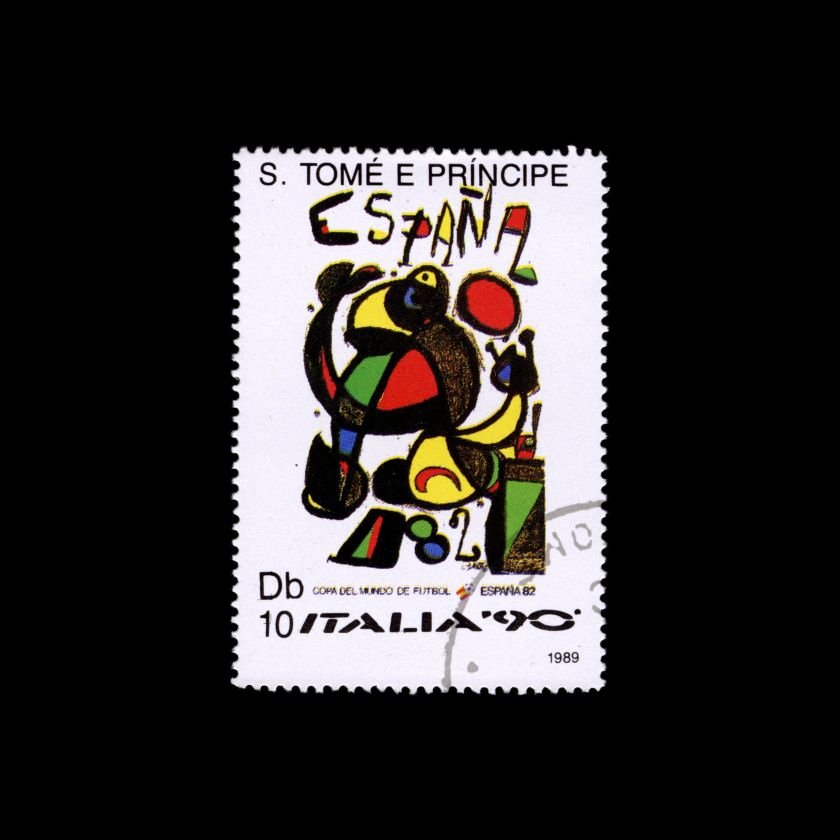 From a design perspective, what’s so fascinating about football stamps?

Flynn: The world of football and design is ever-growing, and it’s an area of design that just excites us. Football stamps are simply part of this realm, perhaps even more unnoticed than others. The stamps celebrate iconic moments from footballing history from across the globe, and I think this broadness and randomness is part of the reason why we find football stamps so intriguing.

And what about specific design elements?

Ollie: From a designer’s standpoint, we love the audacious type and colour combined with these simple graphic illustrations. The materials used are also unusual at times. We have an Algerian stamp from the Spanish World Cup printed onto silver foiling. I’ve always loved posters, especially original prints from other countries. I currently have a growing collection of Japanese Star Wars posters. Football stamps can also just be a more affordable way of buying original prints or artwork, just in miniature.

Whilst the fascination with football stamps primarily comes from a design perspective, the collection aspect interests us as well. We both collected Match Attack cards and Panini stickers when we were young. Football stamps seem like an extension of this childhood hobby; we still get that excitement when we get a new one. And we just find it cool that we have hundreds of individual stamps printed throughout the last 70 years, all celebrating a different moment of footballing history. 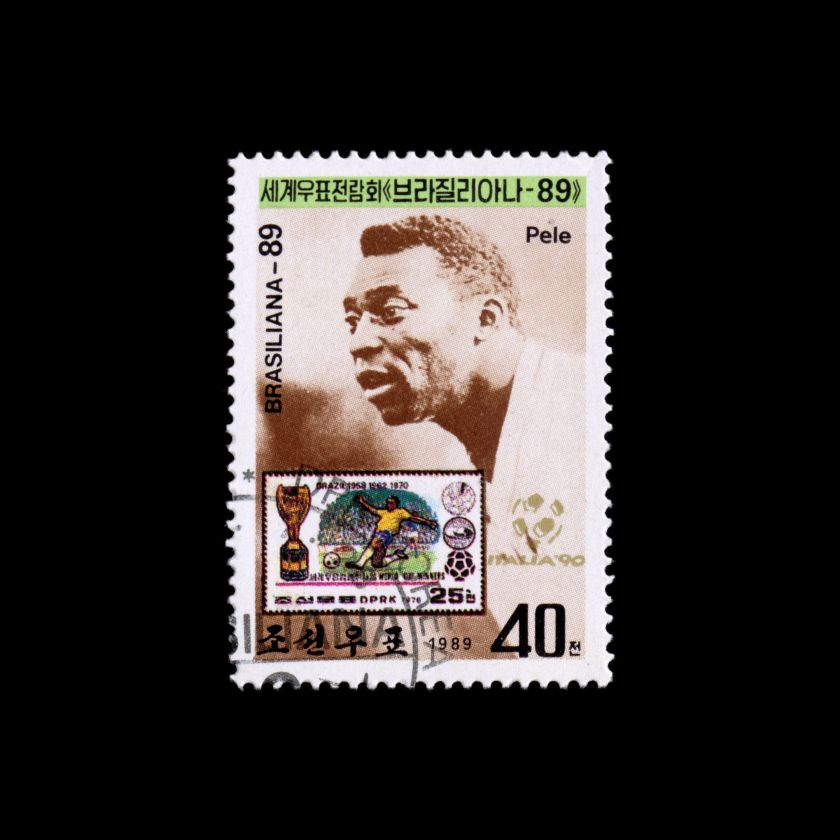 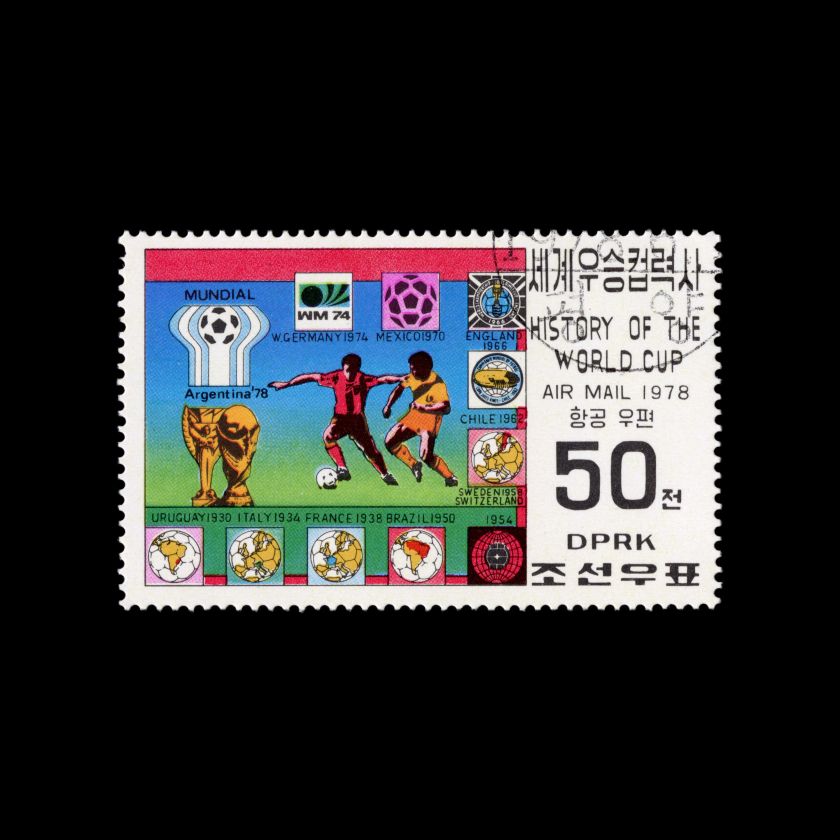 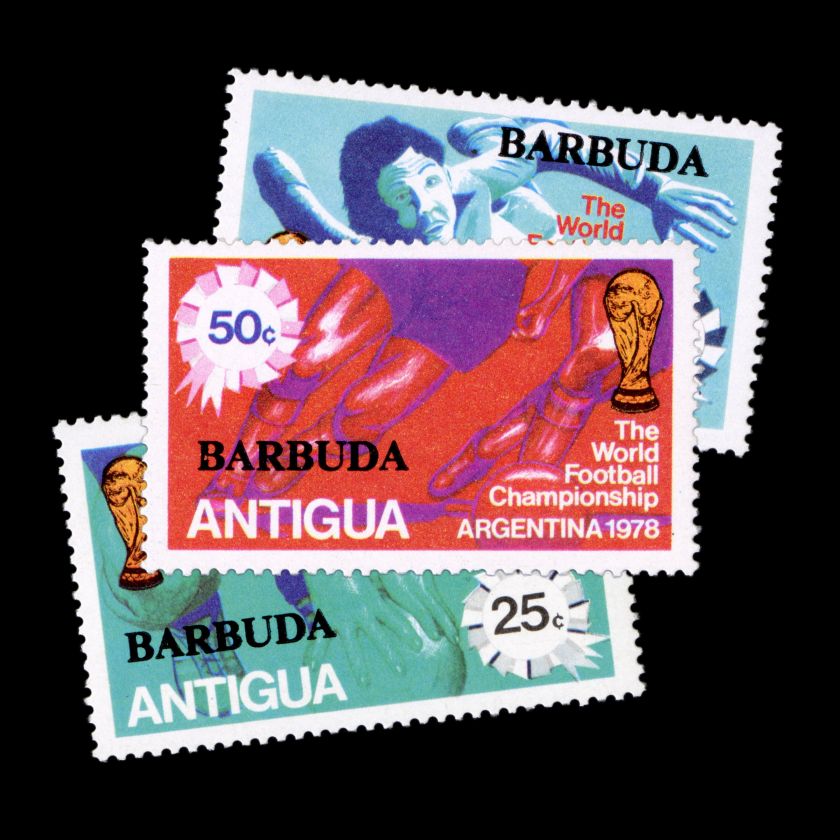 Do you have a favourite stamp?

Flynn: I have a lot of love for the São Tomé and Príncipe stamp from Spain in 1982, featuring the artwork by Joan Miro. It’s such a beautiful painting, and I’ve been after one of the original poster prints for a while, so to find one in stamp form was a huge win. I find it so interesting that this tiny stamp was made on an island in Central Africa and now lives in my bedroom!

Ollie: I love the chrome foiling combined with the bright gradients printed on the stripes on the Algerian stamp celebrating the Spanish World Cup 1982. Unfortunately, the photos don’t do it justice, but it’s just beautiful when it catches the light.

Who do you both support?

Flynn: I support Arsenal. I got lured in by the Fabregas and Van Persie eras, which slowly declined into a fair amount of disappointment. However, as of late, things are actually starting to get exciting for us again.

Ollie: Liverpool for me. Steven Gerrard and Fernando Torres were my favourite players growing up. I even named my pet hamster Torres after him!