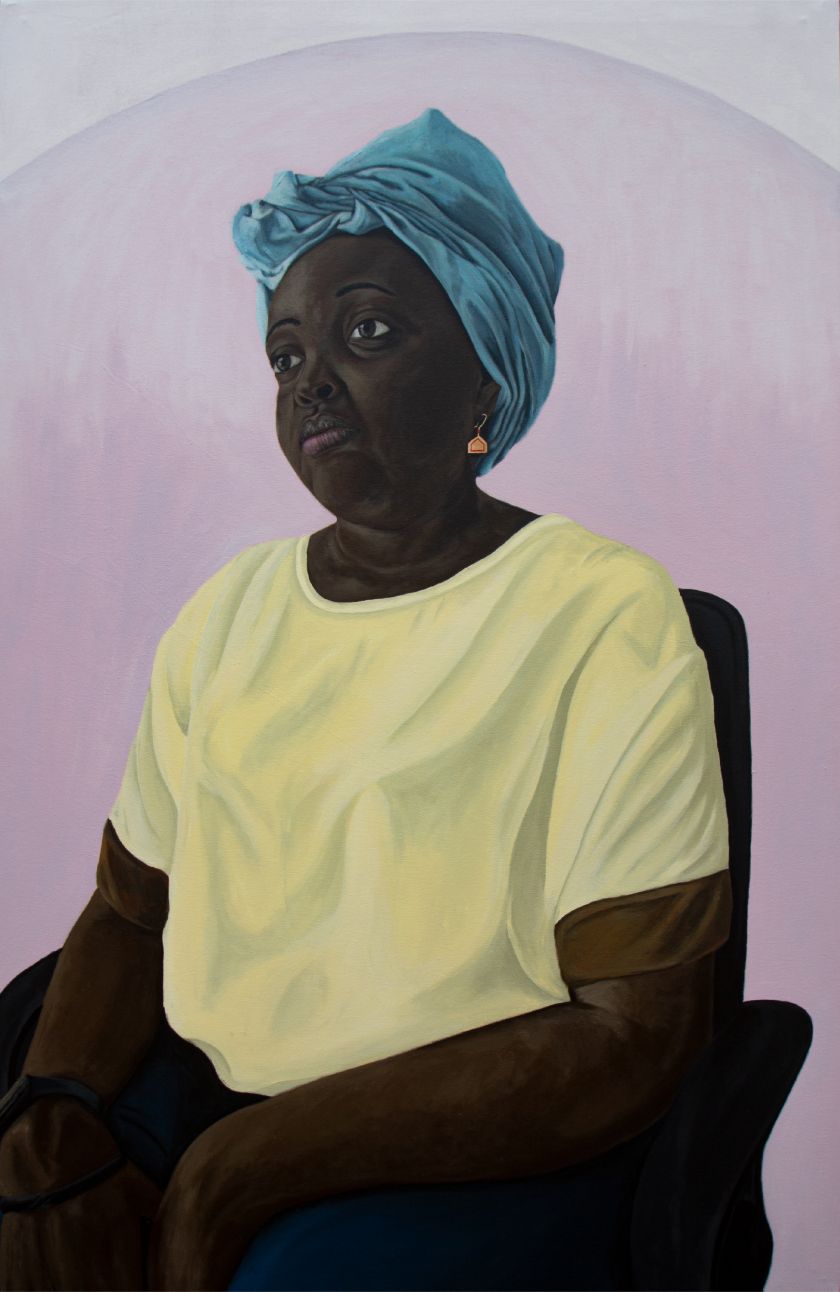 The Ugandan-based artist has spent the last 18 months transitioning from drawing to painting, resulting in a fresh body of work that depicts the ups and downs of “being human in Africa”.

Many can say they’ve picked up a new skill, craft or hobby or two over lockdown – from crochet to rug making or running to binge-watching new shows on Netflix. For , an artist born in a small town called Fort Portal in western Uganda, he’s used the imposed downtime to switch up his practice.

“For as long as I can remember,” he tells Creative Boom, “I’ve always had an interest in making things, whether it was drawing or crafting toys out of yam stems.” Twikirize’s first ventures into art arose after reading a 23-page comic book named Supa Strikers – a story about a fictional local football team that played across the world. Inspired to put pencil to paper, his practice soon evolved as he pursued a BA in Industrial & Fine Art from Makerere University, majoring in Design Communication and minors in Sculpture and Industrial. To such lengths that, upon graduating, he landed a few roles as a graphic designer and art director at various Ugandan advertising agencies. “I transitioned to painting at the end of 2019 when the pandemic hit and the lockdowns started,” he continues. “It was a blessing in disguise for me, as it gave me the time to focus.”

Relishing in the time needed to knuckle down with his brush and canvas, Twikirize has now built an impressive portfolio of portraiture pieces, each of which is rich in composition, tone and narrative. You can immediately tell that it’s a process that takes time and patience to create, affirmed by his impeccable application of colour and considered approach to representation, time and place. 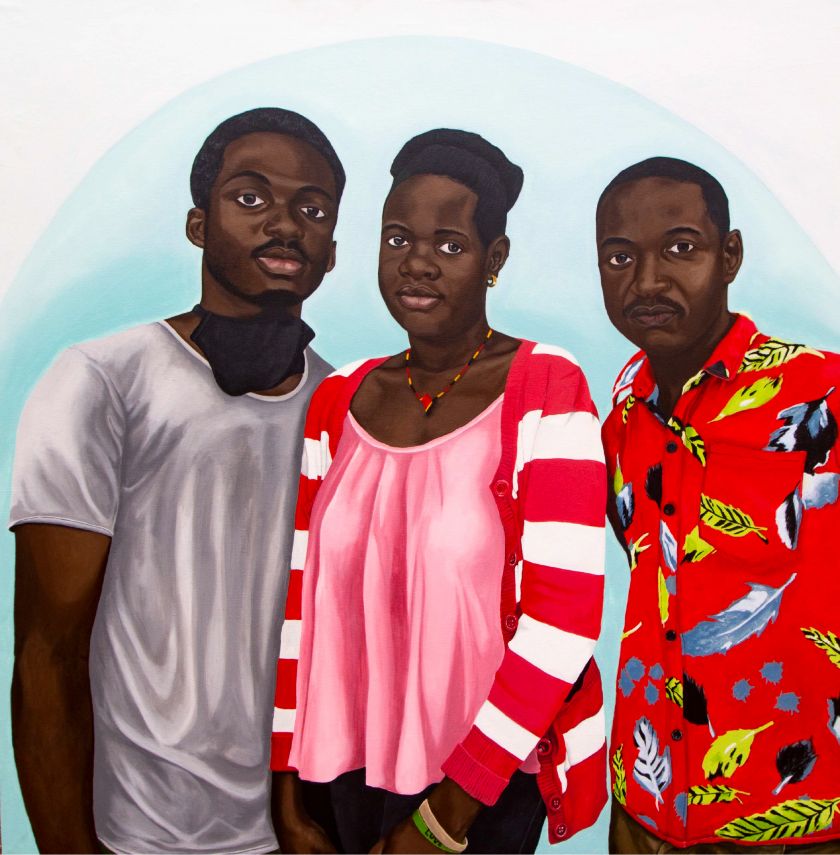 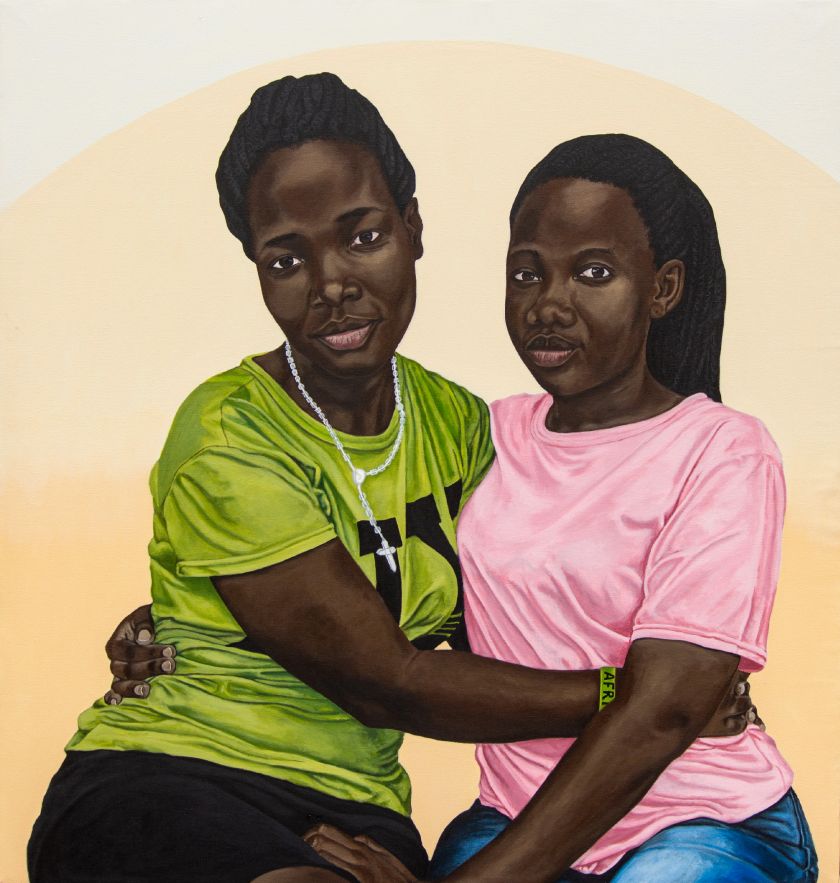 Despite the lengthy process that comes with a painting of this kind, it’s a method that he utterly enjoys. It also pours into his daily observations: “I find inspiration in everyday things, like a journey on public transport or a random movie that I picked online,” he shares. “I look at a lot of images from all kinds of places on the internet. I also find a lot of inspiration in reading, which could be an article about a specific theory or a very well-written essay (Brain Pickings by Maria Popova is one of my favourites).” And once these ideas are formed, that’s when he’ll begin to decipher his subjects and delve further into the compositions.

On the topic of his subject matter, Twikirize tends to reflect on the culture and environment of Africa, narrowing down on its people and the characterisations of everyday life in the country. Themes of community, struggles, celebrations, triumphs and disappointments are therefore paired with vibrant and darker hues, juxtaposed in a way that signals the ups and downs of “being human in Africa”, he says. 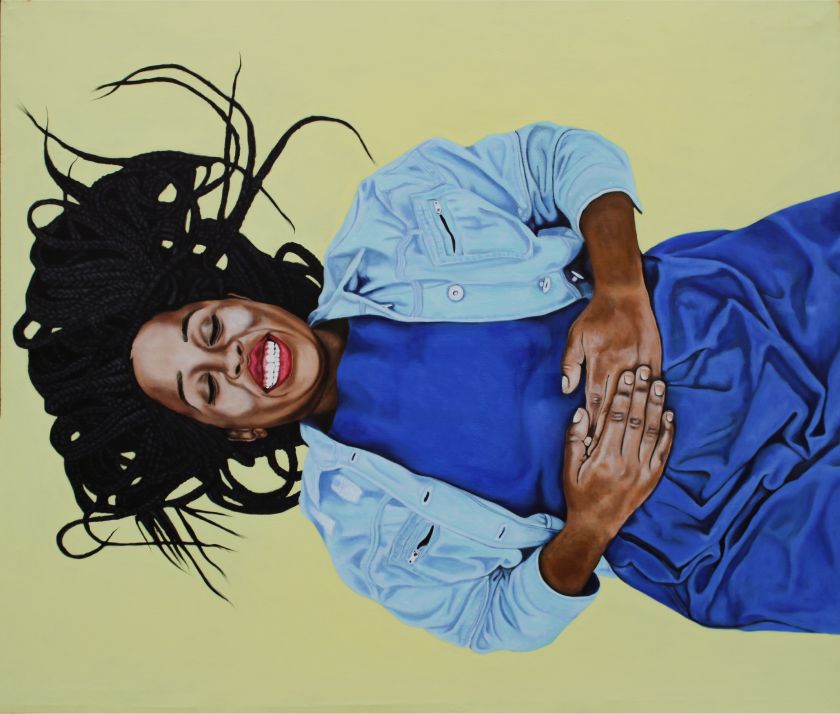 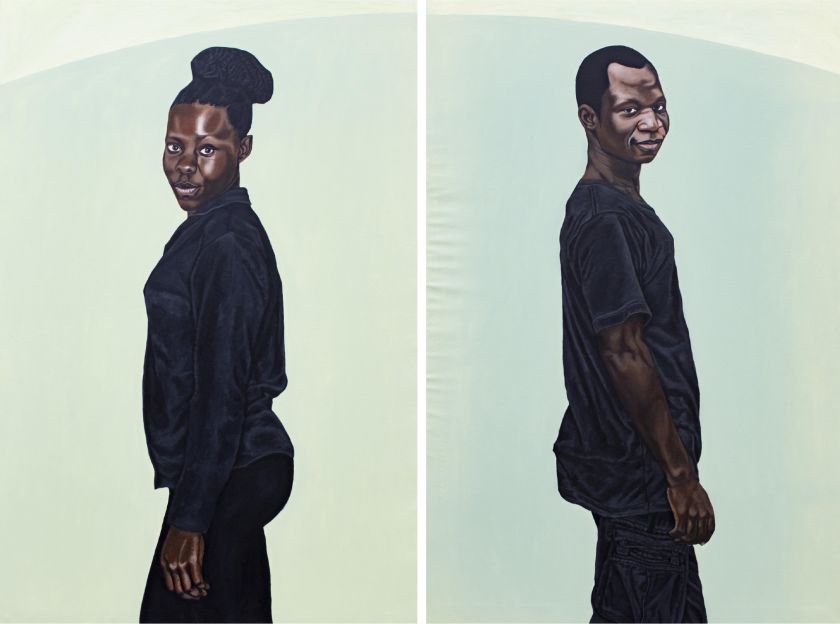 To solidify this, Twikirize’s subjects are positioned with gentle postures – they’re either embracing or sitting comfortably as they softly meet the viewer’s eye. “I can describe my subjects as people that I’m familiar with,” he adds, “it could be a retail shop attendant of a place I frequent or a couple of friends that I have worked with in the past.” Once he’s decided on who to feature, he’ll reach out warmly with a request. He’ll also make sure to send them a gift when a painting they’ve posed for is sold.

Twikirize’s recent piece, Two Thousand Words, is a great example of his ethos as an artist. The piece, which is painted in both peachy and earthy tones, navigates around the theme of “unfulfilled longing for human touch during the pandemic”. A relevant topic indeed, it’s an impeccably tackle artwork that details two subjects enjoying a hug; something we’ve all missed and sought after over the last 18 months – “the urge to hug a friend makes them feel safe, seen and appreciated.”

The painting is also inspired by a quote from Nina Simone, stating: “You can’t help it. An Artist’s duty, as far as I’m concerned, is to reflect the times.” Doing just that, Twikirize has completed a visual musing that not only took hundreds of hours to complete but will also serve as a reminder of the tremulous past year. It’s a piece that we can all relate to, no matter where you’re located in the world. 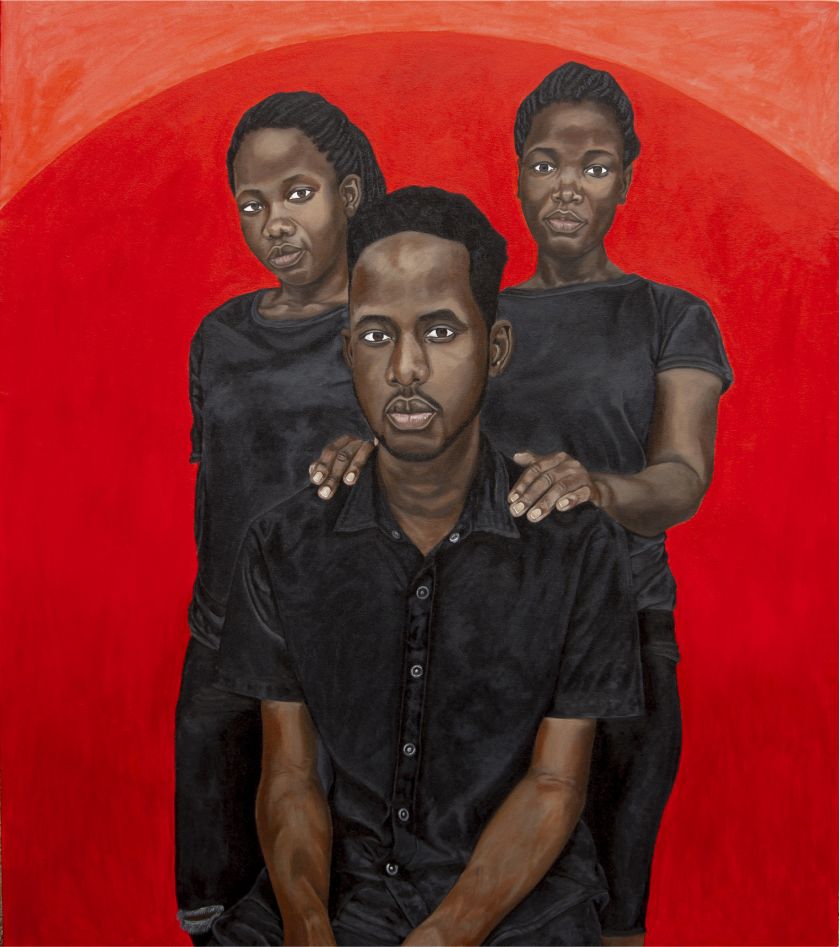 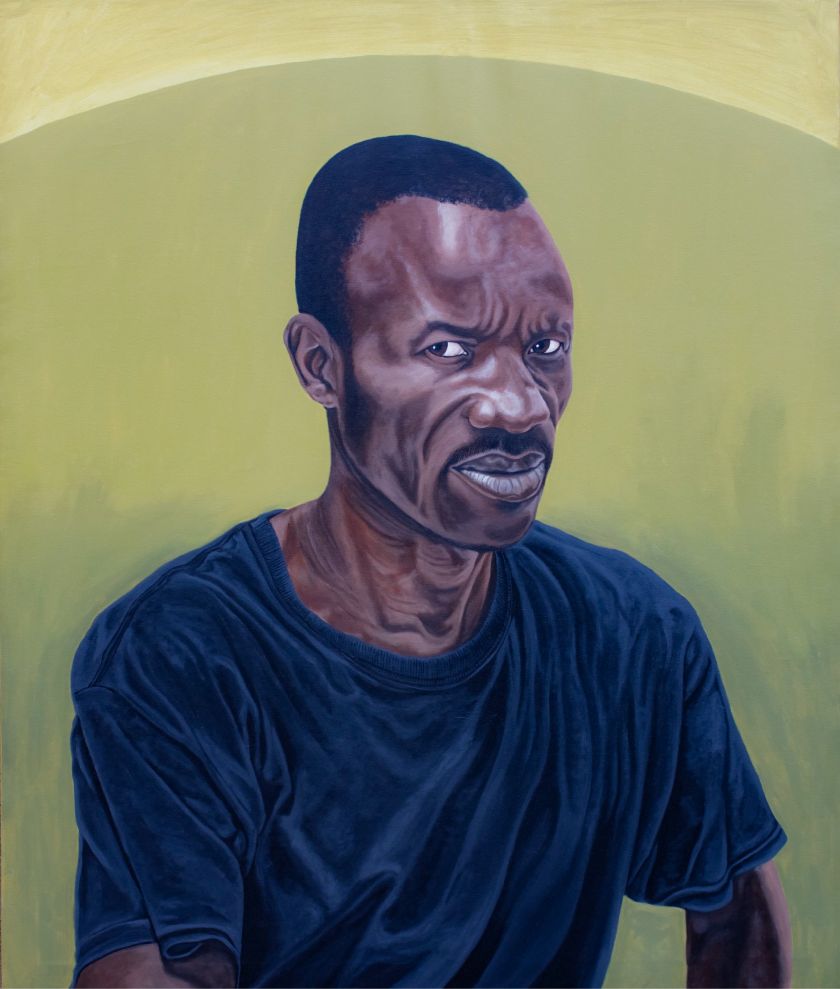 Suspicions of a people who have been wronged © Twikirize Switzin