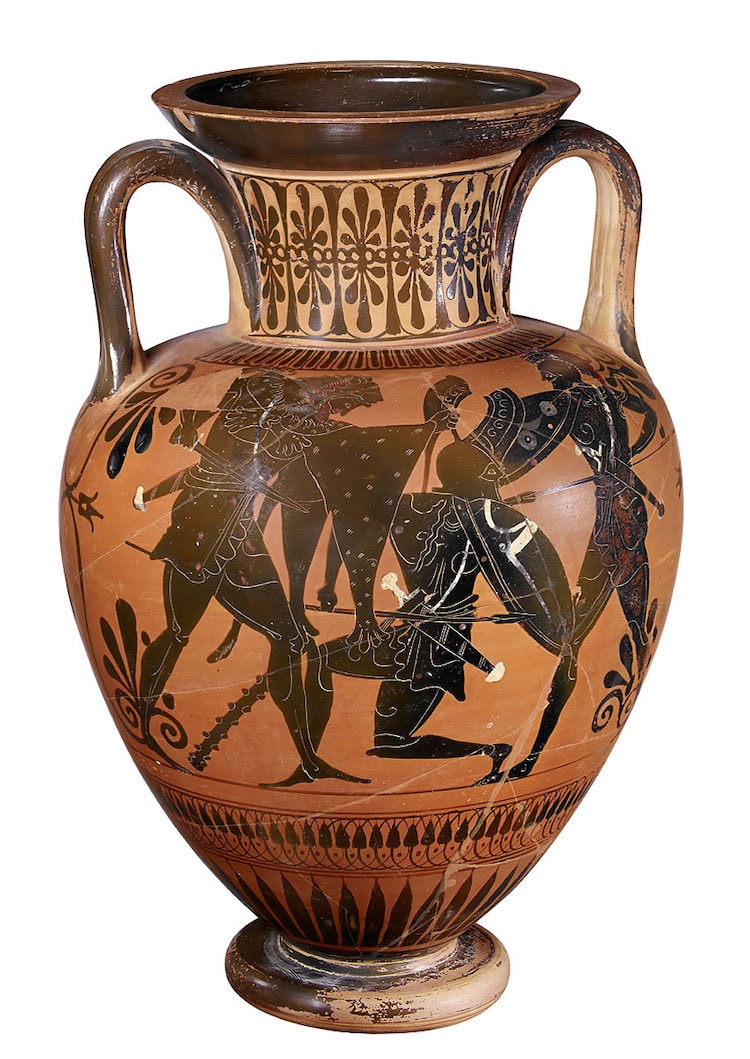 Ancient Greek pottery is one of the greatest archaeological survivors that offers a fascinating insight into one of the earliest human civilizations. From c. 1000 to c. 400 BCE, Greek artisans crafted clay vessels for everyday use—think vases, cups, and plates. Many of these ceramics were decorated with narrative paintings that visualized stories of popular myths and early Mediterranean life.

Ancient Greek pottery now takes pride and place in museums all over the world, but these vessels aren’t only beautiful antiques. They give us a glimpse into the lives, practices, and beliefs of a long-past culture.

Read one to discover how these early ceramics were made, and how the Greek pottery style developed over the centuries.

How was ancient Greek pottery made?

Clay was widely available throughout Greece, but the most popular type was Attic clay. Due to high iron content, it had an orange-red color and a slight sheen when fired in a kiln.

Greek vessels were typically made on a potter’s wheel in separate sections that were later joined together using clay slip—the body, the neck, the foot, and if necessary, the handles. The potter then returned to the wheel to smooth the join marks and refine the final shape.

Greek potters aimed to produce ceramics for practical use, such as holding wine, water, oil, and . Once they found a shape that worked, it was reproduced and rarely changed. These four common forms remained consistent over the years: 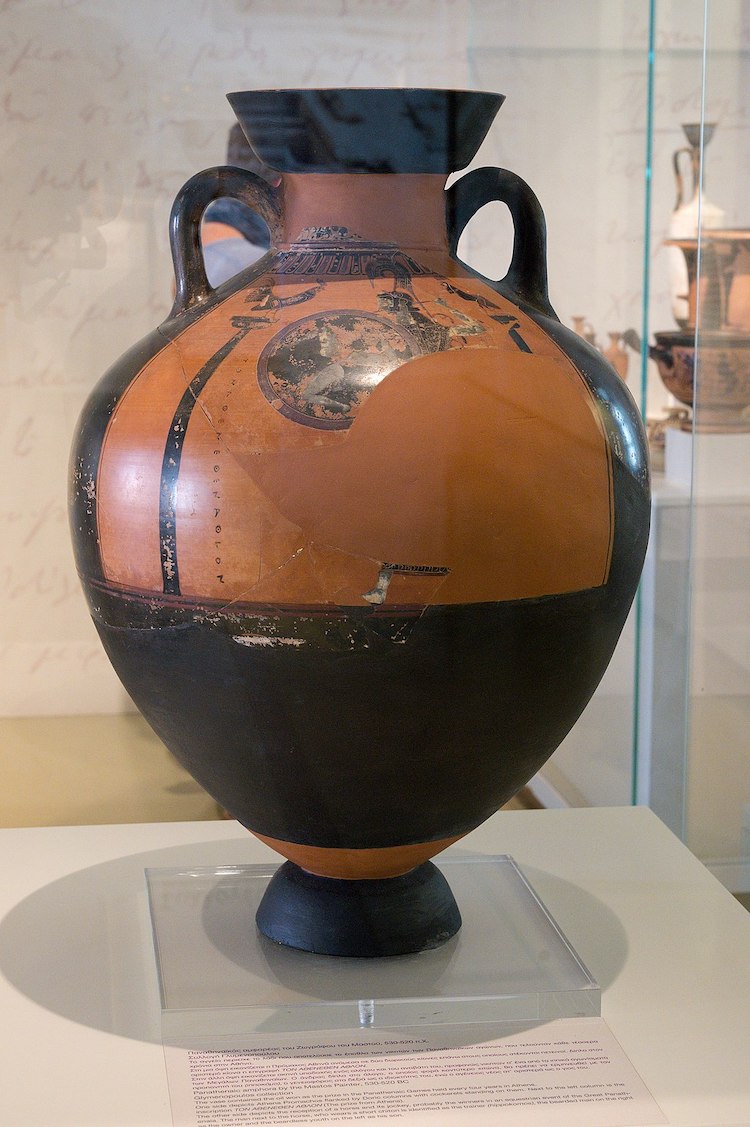 These storage vessels had large bodies and strong handles. Traditional styles include the amphora, pithos, pelike, hydria, and pyxis. 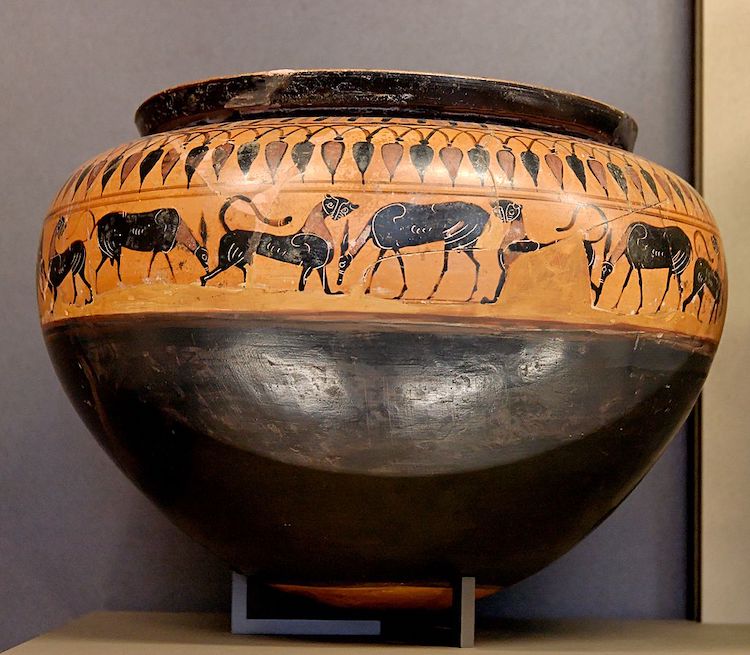 Mixing vessels were usually made in the shape of large bowls with no handles or feet. They were used mainly for male drinking parties. Typical types include the krater and the dinos. 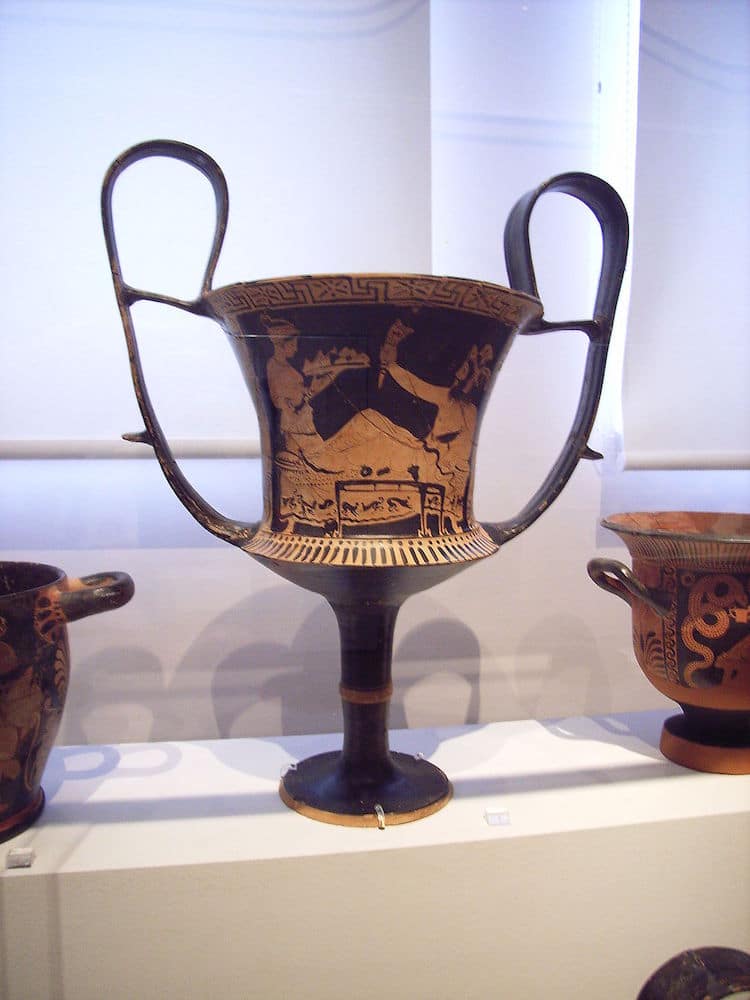 Jugs and cups sometimes had long handles to make them easier to pick up when lying down. Famous styles include the kantharos, phiale, skyphos, oinochoe, and loutrophoros.

Vases for oils, perfumes, and cosmetics 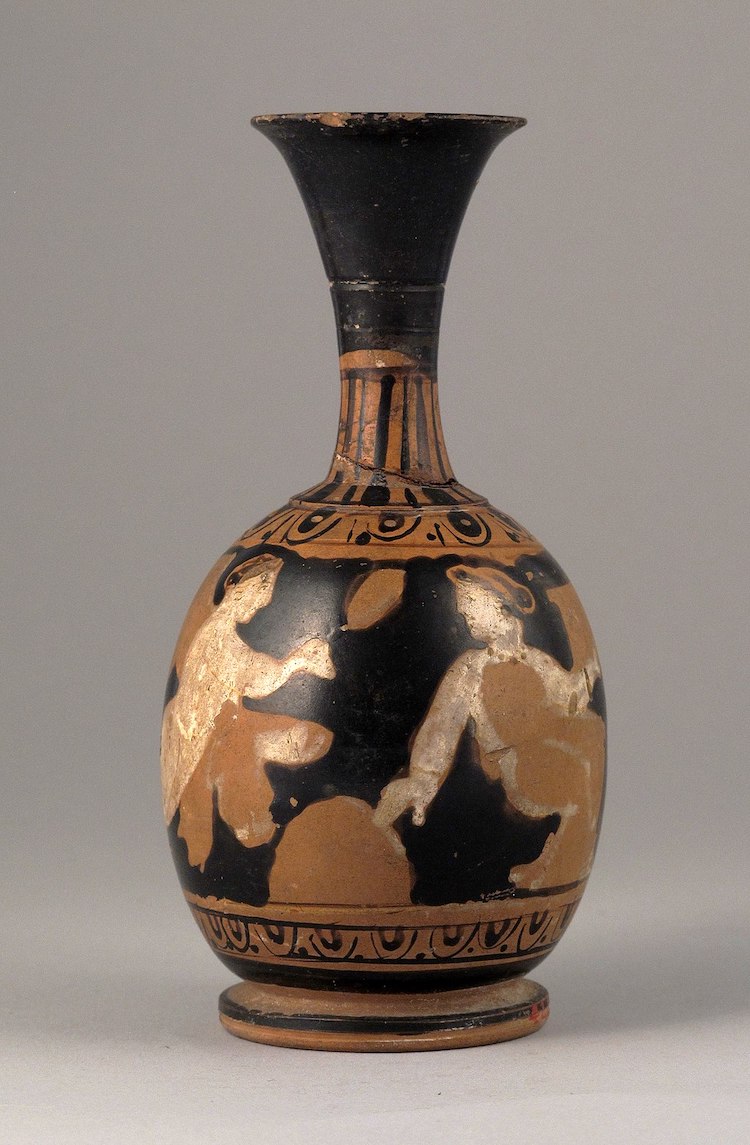 These vessels usually had long necks and no handles. Styles include the large lekythos, and the small aryballos, and alabastron.

Despite the fact that Greek pottery was relatively restricted in shape, artistic freedom was achieved through decoration. Scroll down to learn about the different painting styles that emerged.

After the potter sculpted the vessel, it was handed to the painter to decorate it. Painters often worked in collective workshops under the guidance of a “master” potter. The majority of Greek vases are unsigned, but it’s believed that many individuals of the craft were extremely prolific. In some cases, over 200 vases have been attributed to a single artist, identified through their distinct style. These painters didn’t earn much, but their work was in great demand and sold throughout the Mediterranean.

To decorate the vessels, ancient Greeks used brushes to add black pigment that was made from a mix of alkali potash or soda, clay with silicon, and black ferrous oxide of iron. The paint was affixed to the clay by using urine or vinegar which burned away in the kiln, leaving the pigment bound to the pot. In later pottery styles, details were often added with a thinned black paint which gave a yellow-brown or dark red hue after it was fired. 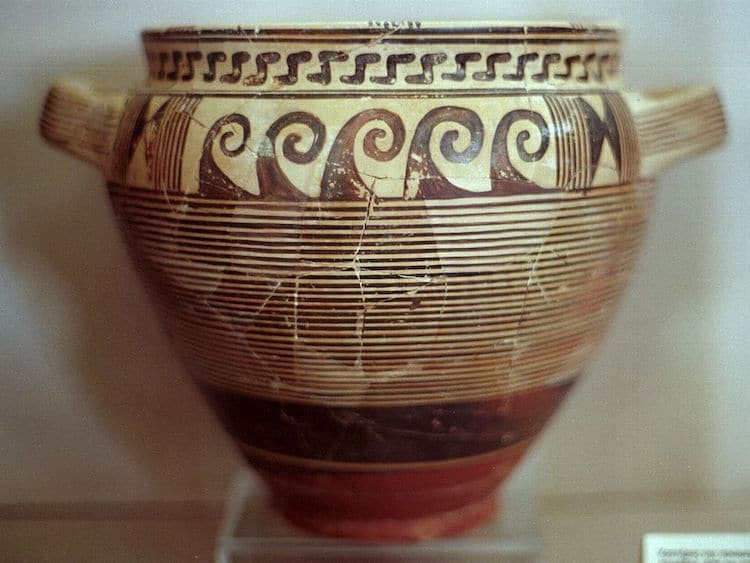 The Greek vases of the proto-geometrical period (c. 1050 to 900 BCE) borrowed their forms and decorations from the Mycenaean culture, where artisans mainly painted simple circles, triangles, wavy lines, and arcs onto earthenware. Each neat marking is perfectly placed to complement the curves of the vessel, leading historians to believe they were carefully rendered using a compass and brushes in different sizes. 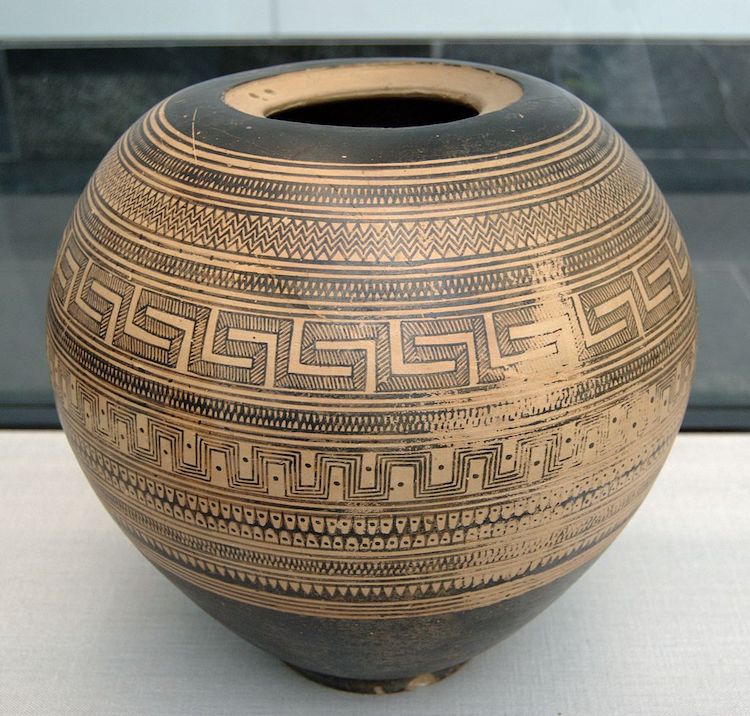 From around 900 BCE, geometric art was flourishing in Greece. The painted pottery style developed to include bold linear designs that are now instantly recognizable as ancient Greek motifs. Using black varnish, painters adorned ceramics with horizontal lines (meanders), triangles, circles, and zigzag shapes that wrapped around the entire body of the vase.

By the 8th century BCE, artisans began covering ceramics in stylized human figures, birds, and animals, painted in brown and black. Over time, the decorations became more and more ornate, and artists filled empty spaces with all kinds of motifs, including the ancient religious swastika symbol (long before the Nazis reappropriated it). 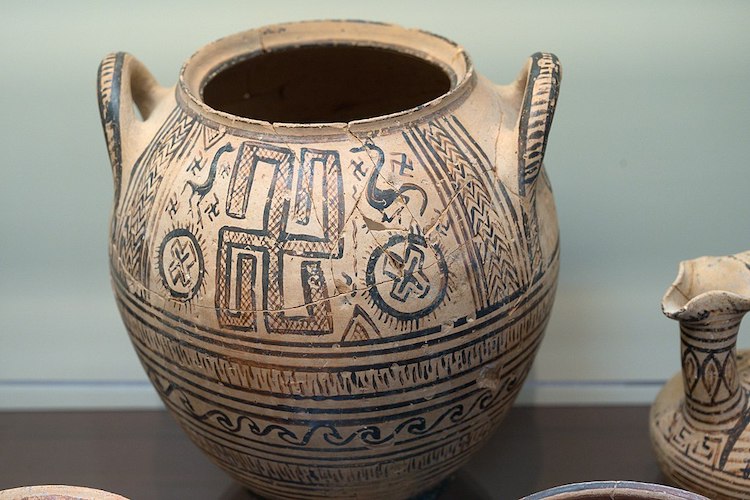 Nearing the end of the 7th century, the geometric Orientalizing style emerged in Corinth. Artists combined Greek motifs and representative illustrations with the curved lines of Egyptian and Assyrian pottery to produce their unique style of ceramics. It was characterized by an expanded vocabulary of animal motifs—including the mythological sphinx and griffin—in friezes across the belly of the vase. By the end of the 7th century, this new trend spread throughout the country. 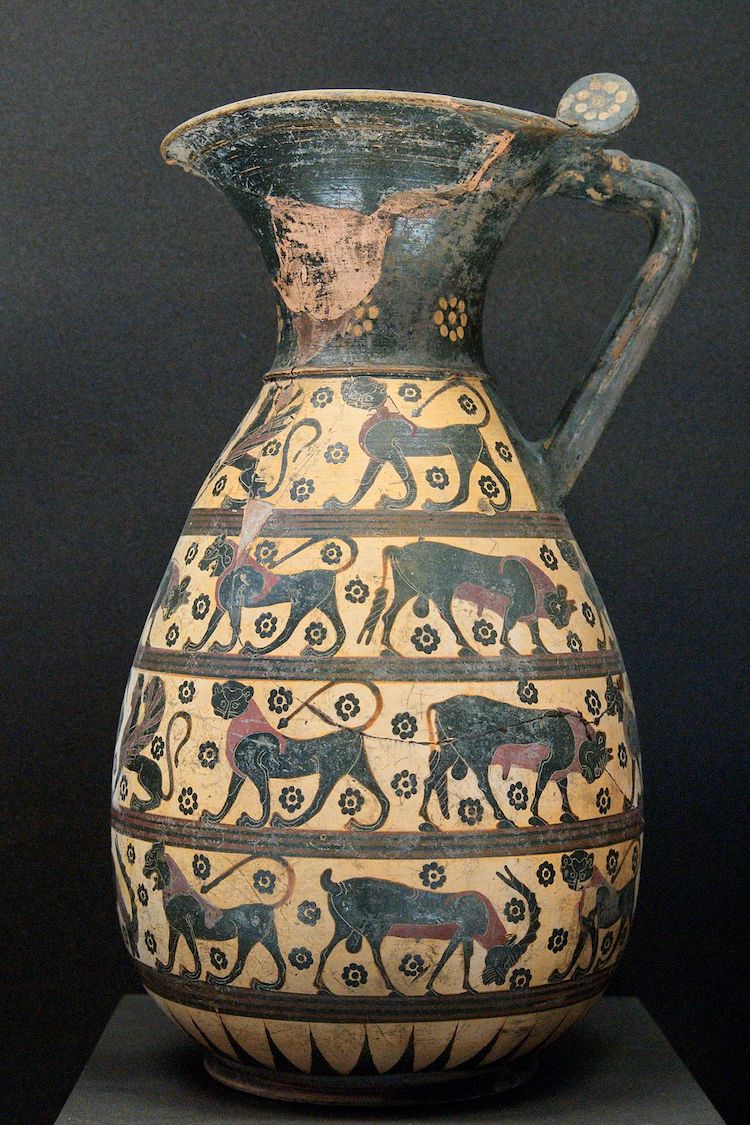 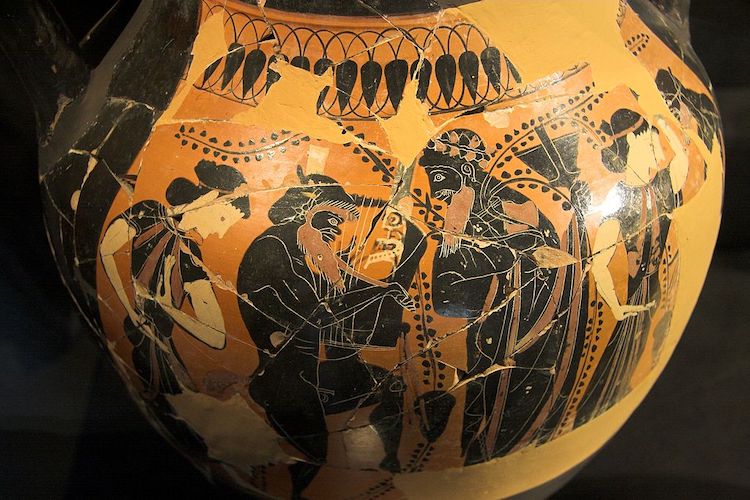 Black-figure pottery is perhaps the style that comes to mind when you think of Greek vessels. The celebrated method was a Corinthian invention during the 7th century and spread from there to other regions, including Sparta, Boeotia, Euboea, the east Greek islands, and Athens. Black-figure pottery dominated the market for the next 150 years as pottery painters gained confidence in rendering stylized figures and animals with much more detail. Mostly in black ink, the figures were often illustrated in complex scenes from Greek mythology. Artists painted their figures posed to show their movements, from fighting their enemies to dancing.

Around this time, many vase painters began signing their work. This indicates their pride and ambition as artists, as well as the high demand for their work. Many historians consider the finest work to belong to Exekias and The Amasis Painter, who are both noted for their expert painting skills and ability to tell a narrative through their art. 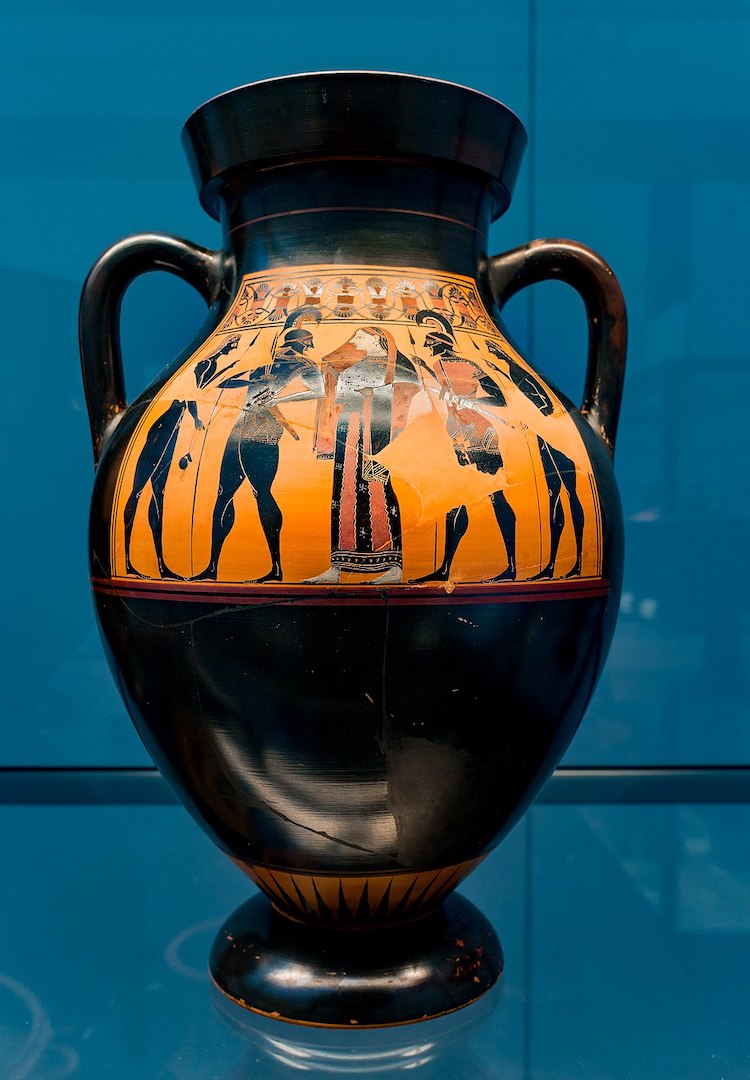 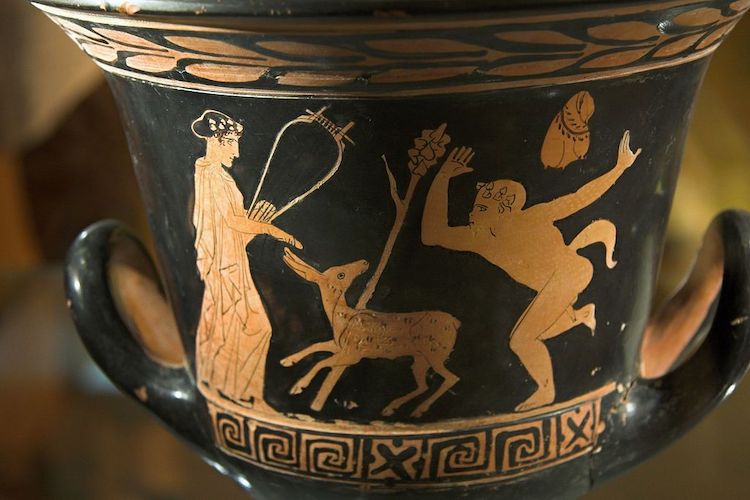 When the red-figure technique emerged, it was often seen in tandem with the black-figure style, and sometimes, both techniques even appeared on the same vase. However, by around 530 BCE, red-figure pottery took over and was the favored method that endured for the next 130 years.

Rather than paint the figures in black, artists began outlining them with a black slip background, leaving the figures in white. This allowed painters to achieve even more precision in their characters, from diverse facial expressions to intricate clothing details. Artists were also able to depict complex everyday scenes with greater perspective and overlapping figures.

By the 4th century BCE, vase painting became increasingly less popular, as the curved canvases had their limitations. Artists began favoring more open, flat media—such as wall painting—so that they could create more elaborate scenes. And so, traditional Greek pottery died out as an art form. Nevertheless, it’s still an important historical medium that continues to captivate those who want to learn about this fascinating lost culture. 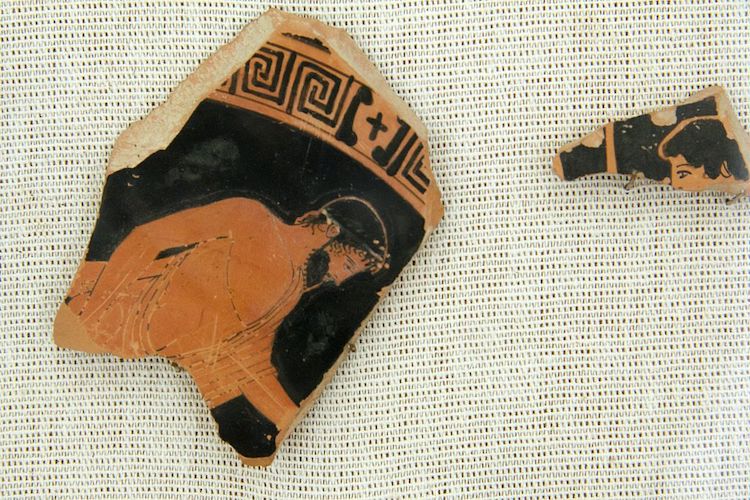