‘Understated with a strong message’: Illustrations by John Holcroft that reflect what’s happening in the world 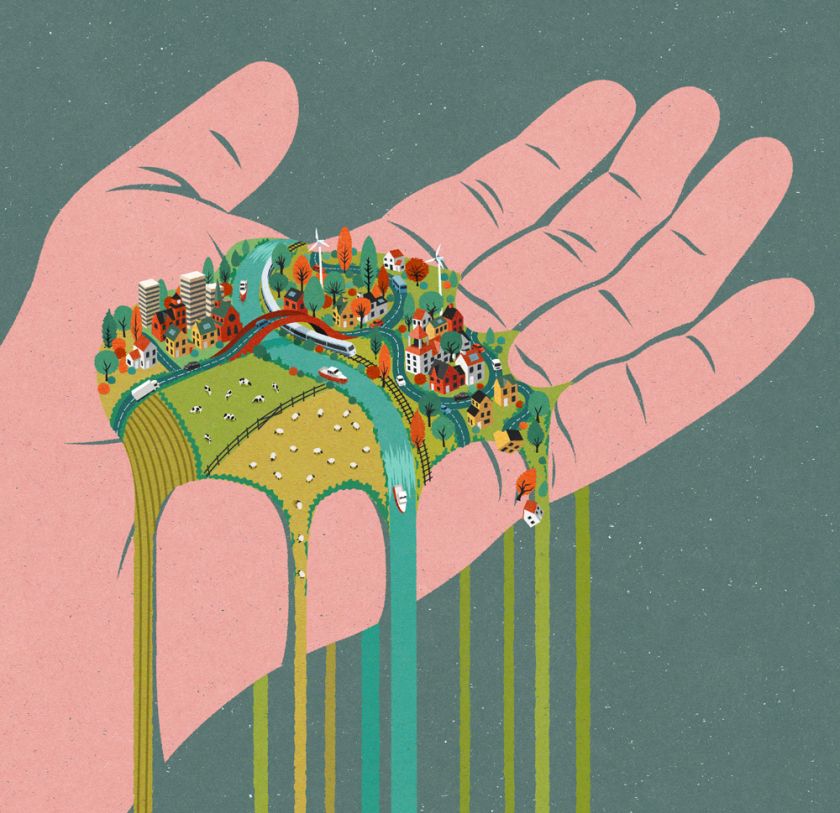 The earth is slipping through our fingers. This illustration was to show how the earth is taken for granted and the beauty see now could be lost in the near future © John Holcroft

began his career 25 years ago, working with traditional acrylic on canvas during a time when “work was slow” and technology was causing massive shifts in every industry. Today, he’s an acclaimed illustrator creating digital illustrations for some of the biggest brands and media organisations in the world.

The Sheffield-based creative studied graphic design in college where they used pens, rulers and photo-transfer machines and entered the working world during a recession when jobs were scarce. “If that wasn’t bad enough, the industry was going through a big change,” John tells us.

“Computers and digital technology meant that all my analogue work in my portfolio was useless. My only way into anything creative was illustration, and acrylics was something I was fairly good at. Having spent the next few years honing my work I was faced with the decision, do I keep plodding on painting commissioned work that takes days or do I go digital and create work that takes a fraction of the time?” 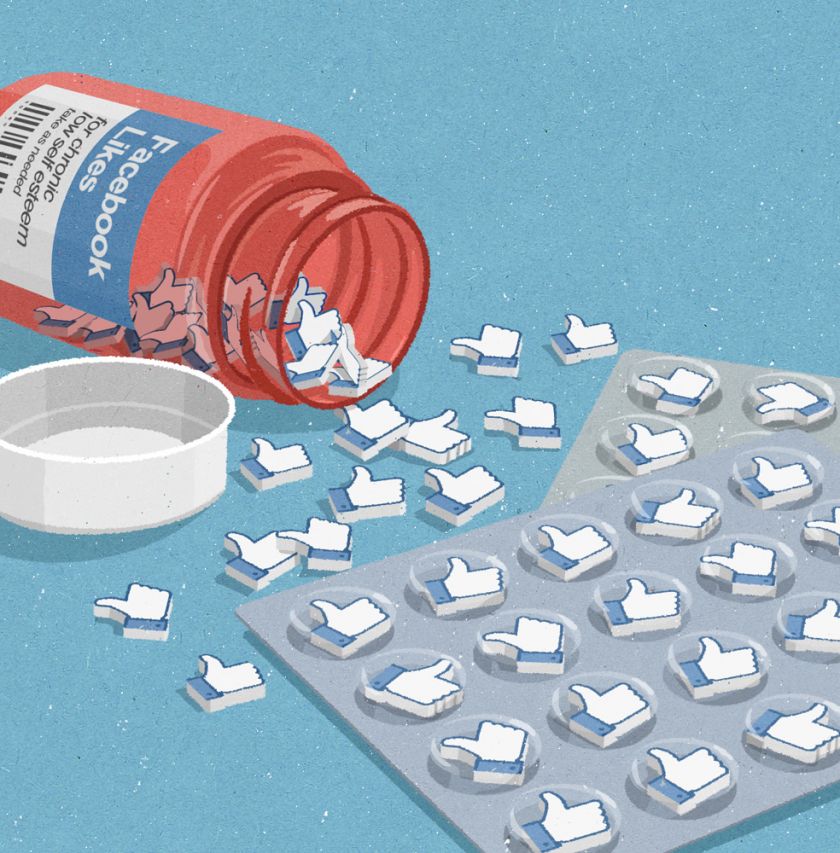 Editorial illustration about how addictive ‘likes’ can be © John Holcroft 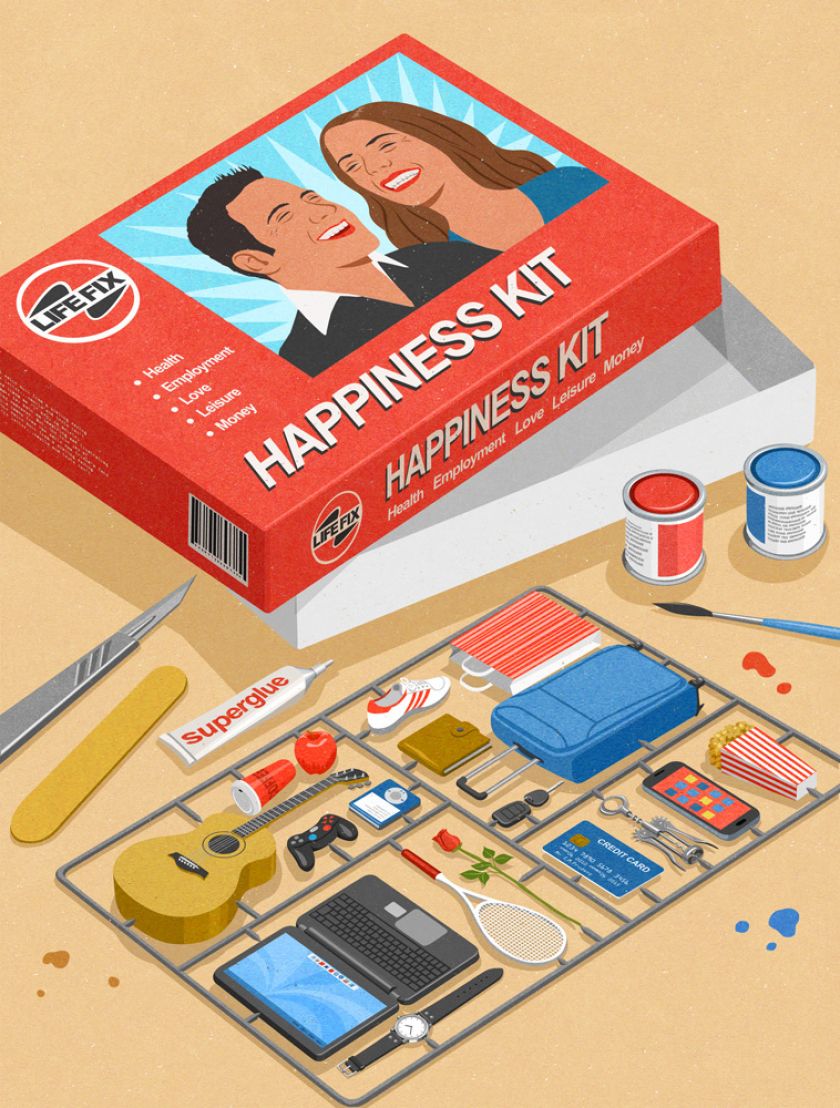 With the digital revolution showing no sign of slowing down, John eventually embraced technology and the work slowly picked up. “It wasn’t a decision I took lightly,” he say. “I was never a computer whizz and I suppose I avoided technology until I had no other choice. It took me a while to convert but by the time I had got used to working digitally, I couldn’t go back to working on canvas, posting it off and praying they send me the art back. There were times when I had rush jobs and had to stay up all night finishing it, now I can create artwork in a matter of hours.”

Those days of acrylic painting weren’t wasted, though. John believes they helped him to get to where he is now. “My concepts haven’t changed and in some ways, my style hasn’t changed, it has just grown and developed but unlike acrylics, I can email it to clients and do amendments. Having acrylic work doesn’t make them more valuable than digital work, I still have all my painted commissions sitting in a folder in the loft so they’re not worth anything. However, my digital work is being reused and still working for me long after execution.” 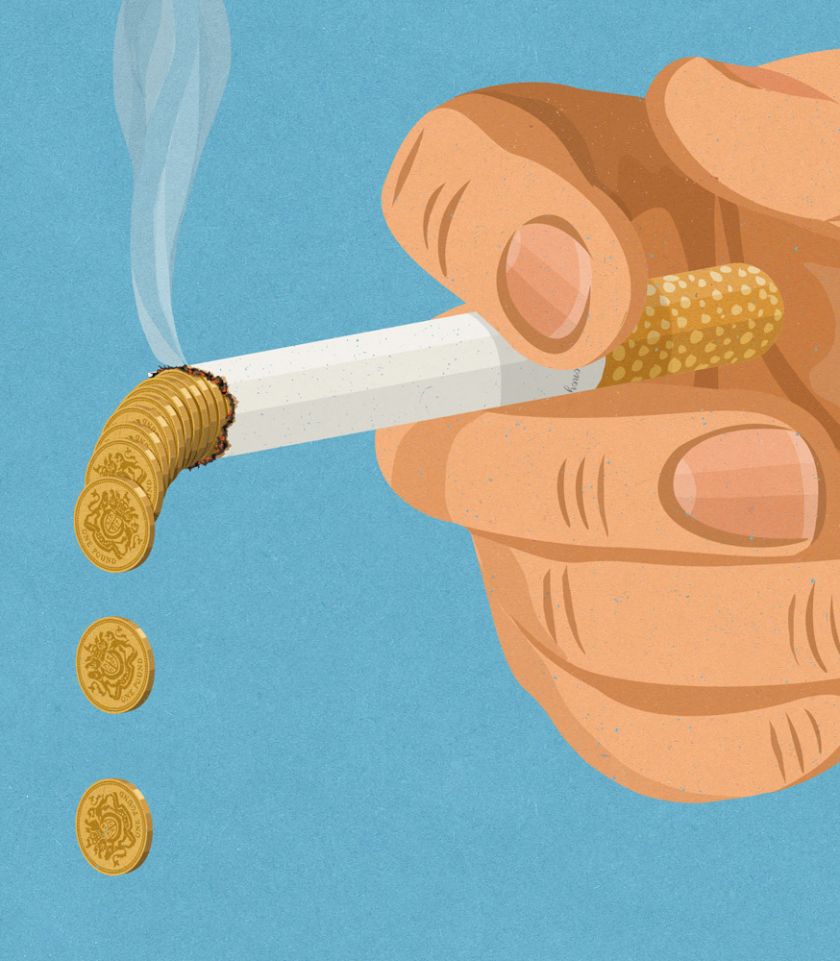 The cost of smoking © John Holcroft 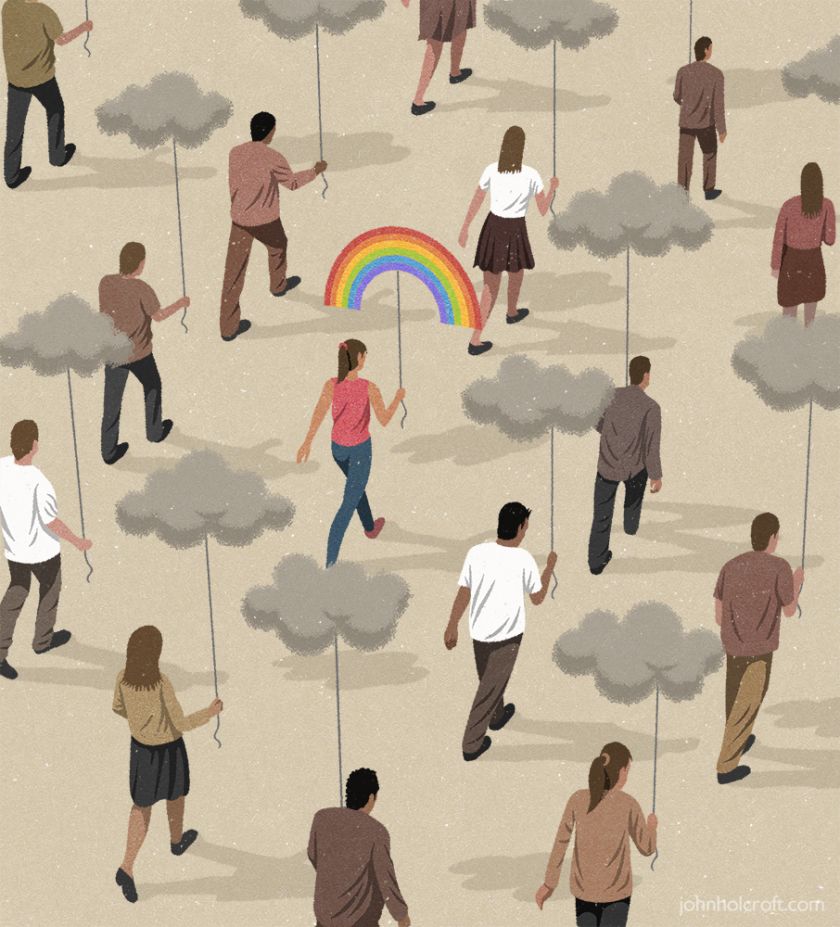 Inspired by the likes of David Cutter, Mark Ryden and Edward Hopper, John’s work is full of narrative and meaning, tapping into current affairs, world events and collective moods. It’s a style that suits editorial illustration perfectly, attracting repeat customers such as The Guardian, BBC and The New York Times. It also reveals a little of John’s upbringing, as he was raised in Lancashire and relocated to Yorkshire at aged nine during the early ’80s when miners were on strike, Kool & The Gang were gracing the charts and Saturday morning cartoons ruled the world. “My style has evolved organically, there was no conscious decision to make it the way it is. The best way I can describe it is: understated look, strong message,” he says.

As any illustrator will know, the industry is hugely competitive and isn’t an easy career choice to make. “It has been a rollercoaster ride the last 25 years,” says John. “In 2008, I was working in a different style completely, my work went down the wrong path and hit a dead end. I was convinced it was the end for me and at that time I had a back operation that incapacitated me for several months, during which time I worked on my new and current style. There isn’t ever a time where I feel ‘safe’ and I can stop pushing myself, you have to keep pedalling or the bike will fall over.”

One could say the life of an illustrator has to remain on the pulse of what’s happening in the world more than any other creative profession. Climate change, global pandemics, politics and scandal – there is plenty to keep John busy. “The planet is on course for destruction marred by greedy corporations who are putting profit above everything else and stubborn politicians,” says John. “And social media is becoming a propagator for hate, lies, misinformation and control. You could say it’s a bonanza of material for artists and satirists but I just have to reflect on what I see.” 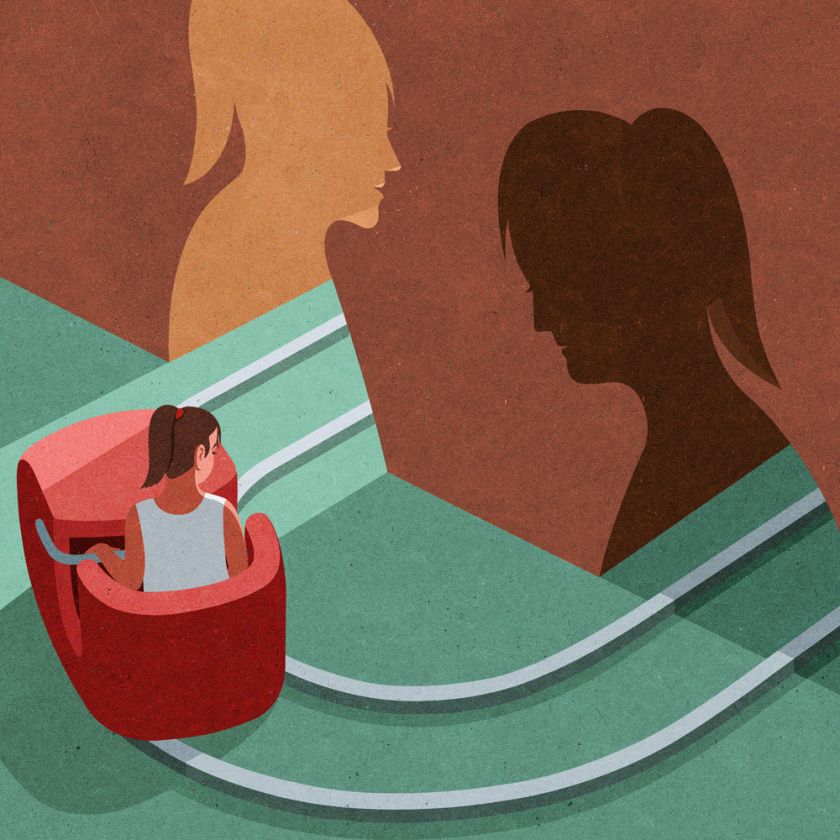 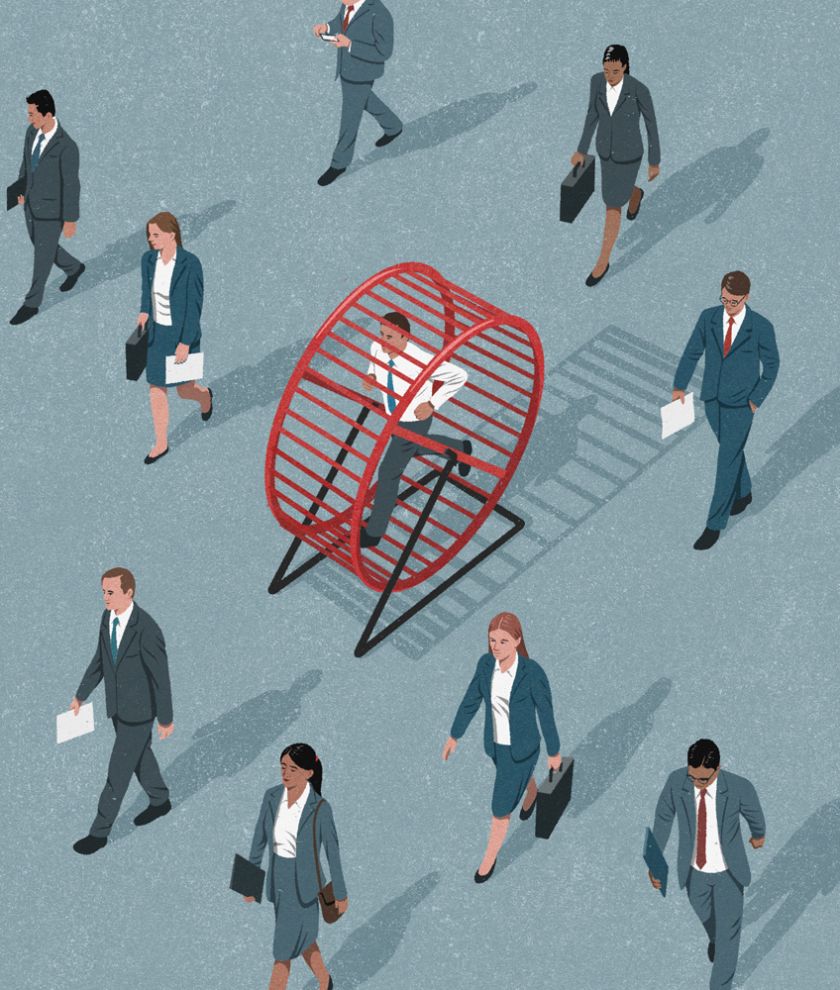 John’s main commissioned work is for publications that are specific and don’t allow too much freedom away from the brief. Alongside these works, John creates plenty of personal illustrations: “It’s where I can do whatever inspires me, and I suppose it’s the horrid stuff. I do try to include positive uplifting work, too.”

One recent commission was for a French media company that wanted to raise awareness of food waste. “The poster was in two halves; the first half was of chimneys with smoke arising above, the second came a week later and was added bellow the chimneys turned out to be fork prongs and the bottom image was of spaghetti on a fork,” he explains. “I really enjoyed doing that and learned that all factors of food waste were a third of overall pollution to the Earth’s atmosphere.” 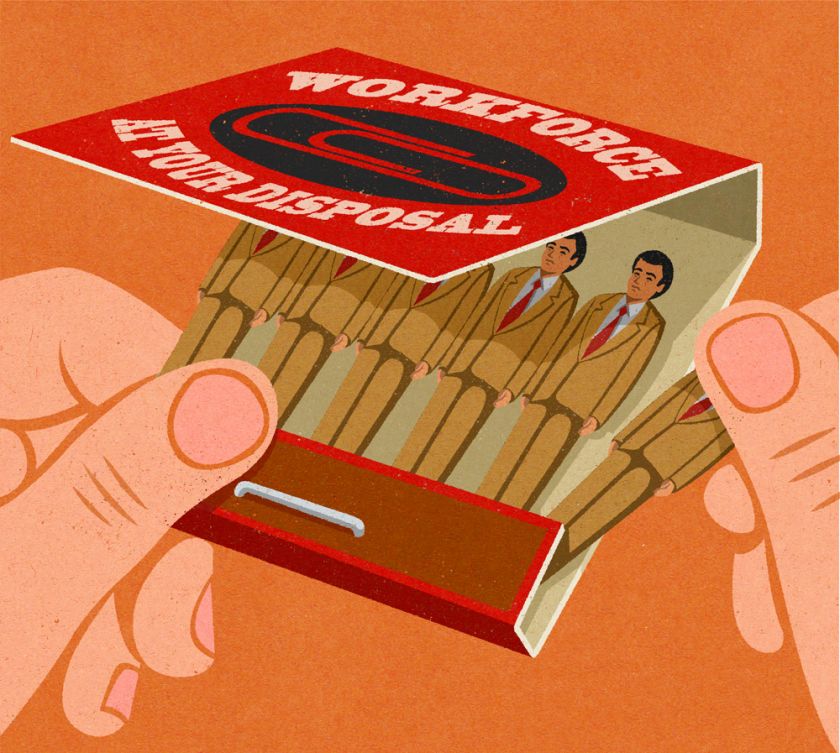 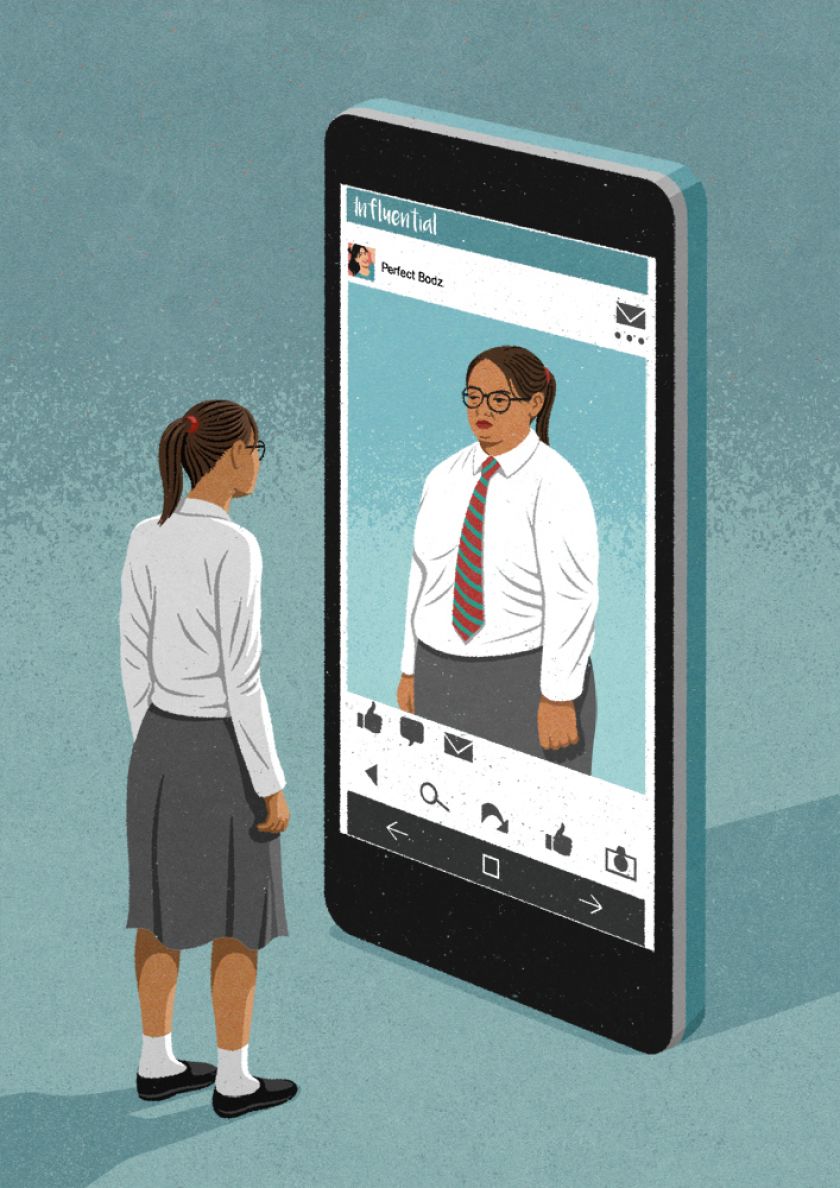 Illustration about how some social media pages can have a negative influence on teenagers’ self esteem, giving them a false impression of what is normal in body shape. Reports say that this can lead to depression, anxiety is some cases anorexia © John Holcroft