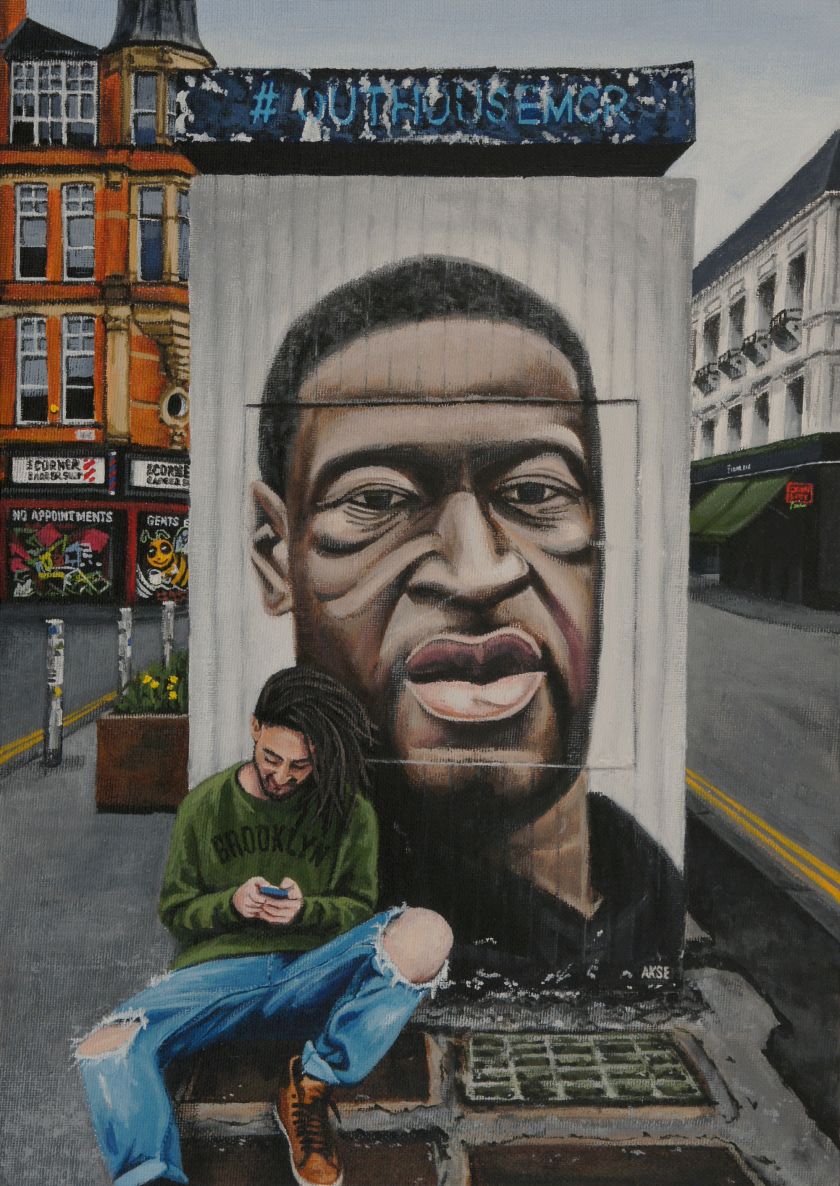 Renowned for his paintings that explore our addiction to technology, British artist takes a more positive slant in his latest series of works, Urban Realist, picking up on the cheerful poster campaigns that we saw plastered around Manchester and other UK cities during the height of the pandemic.

As usual, Peter’s subjects are staring at their smartphones, the glow of the screens lighting up their faces. But rather than taking a sombre approach to this worrying addiction, like in his , these new paintings feel brighter, kinder and full of hope. His subjects are smiling, unlike previous portraits where people often look lost or even sad.

“Our phones are now never away from us, so seeing people connected to them 24/7 is so commonplace that we don’t give it a second glance,” Peter tells Creative Boom. “I have always been fascinated with situational paintings and what they tell us about the period in which they were painted. I’m capturing Manchester life in the 2020s in a similar way to how Edward Hopper captured New York life in the 1920s.”

With his latest works, there’s more of a backdrop this time: a focus on architecture and street furniture, whereas before, there were just simple backgrounds, possibly to further emphasise the state of our reliance on devices. It’s a fresh take on a theme that Peter felt was relevant, given the last two years: “Manchester has changed immensely over the last decade,” he adds. “It’s such a constantly evolving and vibrant city and there are so many incredible stories to put into my paintings. There has been a gentrification of certain areas such as the Northern Quarter, which has long been known for its creativity and street art, and so I keep returning there for a lot of my urban landscapes.” 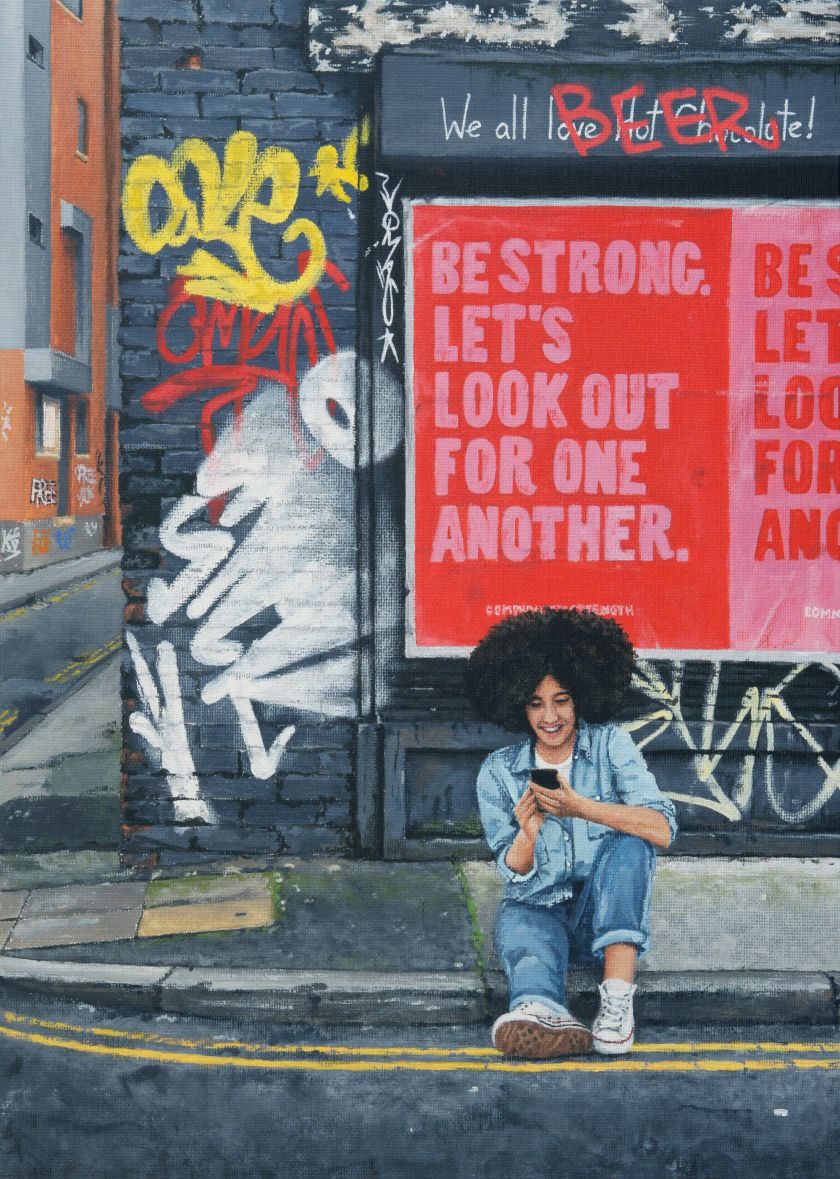 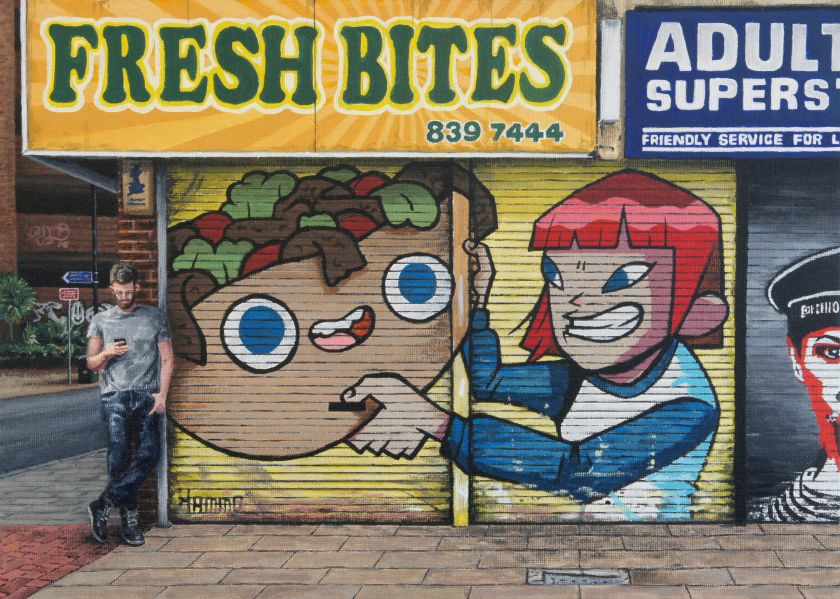 Since lockdown, Peter has been painting these scenes to include positive messages. “It just felt right,” he explains. These positive messages come in the form of posters or billboard campaigns from that depressing era, reminding us to stay strong and look after each other. In one artwork, we instantly recognise ‘s Please Believe These Days Will Pass, possibly on Edge Street in the Northern Quarter, a crumbling building in the backdrop. In another, we spot an encouraging by Feel Good Club and Manchester’s Finest to combat last year’s Blue Monday. It makes quite the contrast to Peter’s usual stuff, where we see his characters looking tired or perhaps overwhelmed by doom-scrolling and being constantly online. Now, it seems as though his protagonists are happy, relishing the upside of technology and our ability to stay connected when the whole world has been told to stay at home.

“Manchester was probably similar to many cities across the UK where the streets were eerily quiet for months,” says Peter. “But then in true Manc style, as life started to ease up last summer for a short time, the street artists and designers came out and cheered us up with some brilliantly uplifting flyposters. As soon as I saw these on Thomas Street in the Northern Quarter, I knew I just had to do a painting of them, as they represented a positive side to life in lockdown, lifting our morale on a rainy Manchester day. I think they’re beautiful examples of how humanity and creativity can help get us through dark days.” 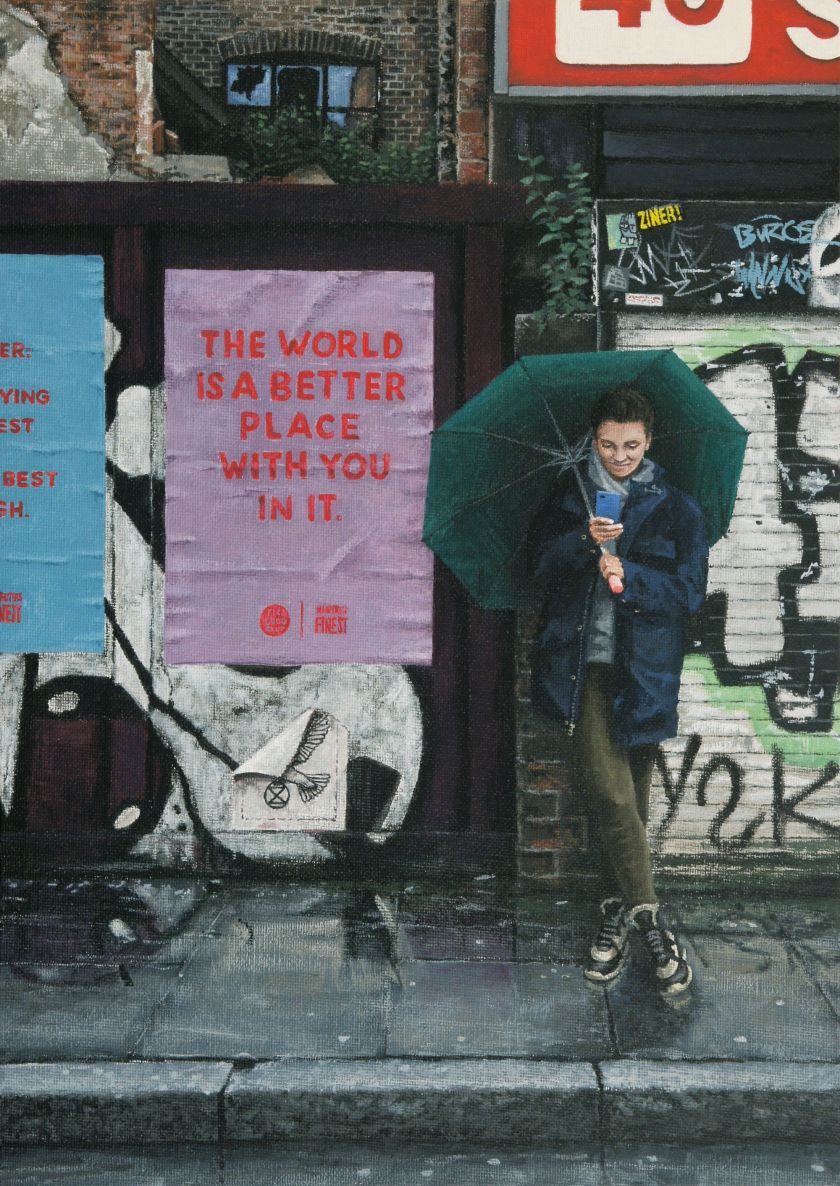 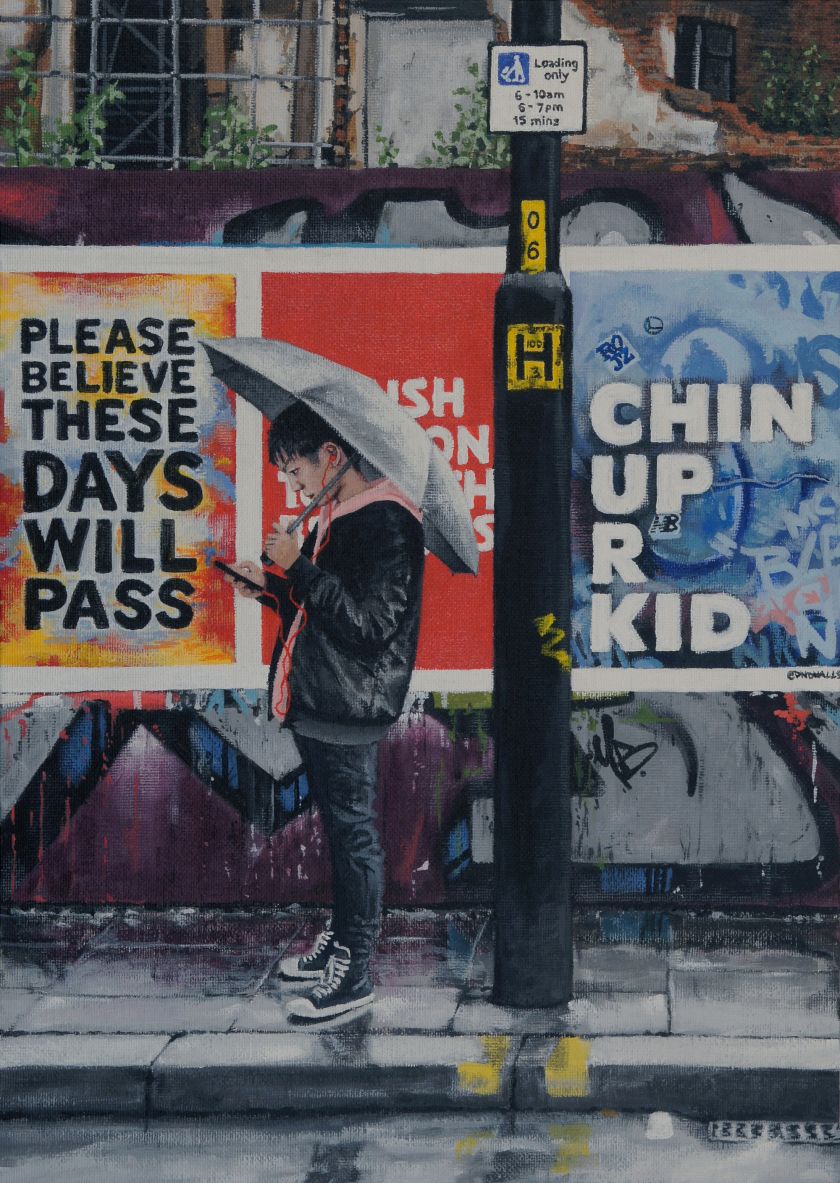 But it’s not just this comforting angle that Peter takes in his latest paintings; we also see a hint of what happened during the Covid-19 pandemic and how Manchester responded to such huge global events. Like the murder of George Floyd and local artist Akse’s memorable that popped up in Stevenson Square, which gained a lot of love from Manchester, as many laid flowers and tributes next to it.

Aside from other clues of what was happening in the world, many of Peter’s paintings feature iconic street art around Manchester: the famous Invader on Faraday Street by the mysterious artist or ‘s classic mural on the shutters of Fresh Bites on the corner of Oldham Street and Hilton Street. It’s an incredibly warm hug from someone who clearly loves Manchester as much as we do and a reminder that even in the darkest of days, there is comfort in knowing the familiar spots will always remain. Unless, of course, you’re aware of the dystopian works of , then that’s another story.

If you’re a fan of Peter’s latest paintings in his Urban Realist series, then you’ll be happy to learn that he’s selling some A3 fine art giclée prints in his . Printed on 310gsm museum grade archival paper and in a limited edition of 250, each one is numbered, titled, signed and stamped and costs £80 plus £6 for postage and packaging in. the UK. 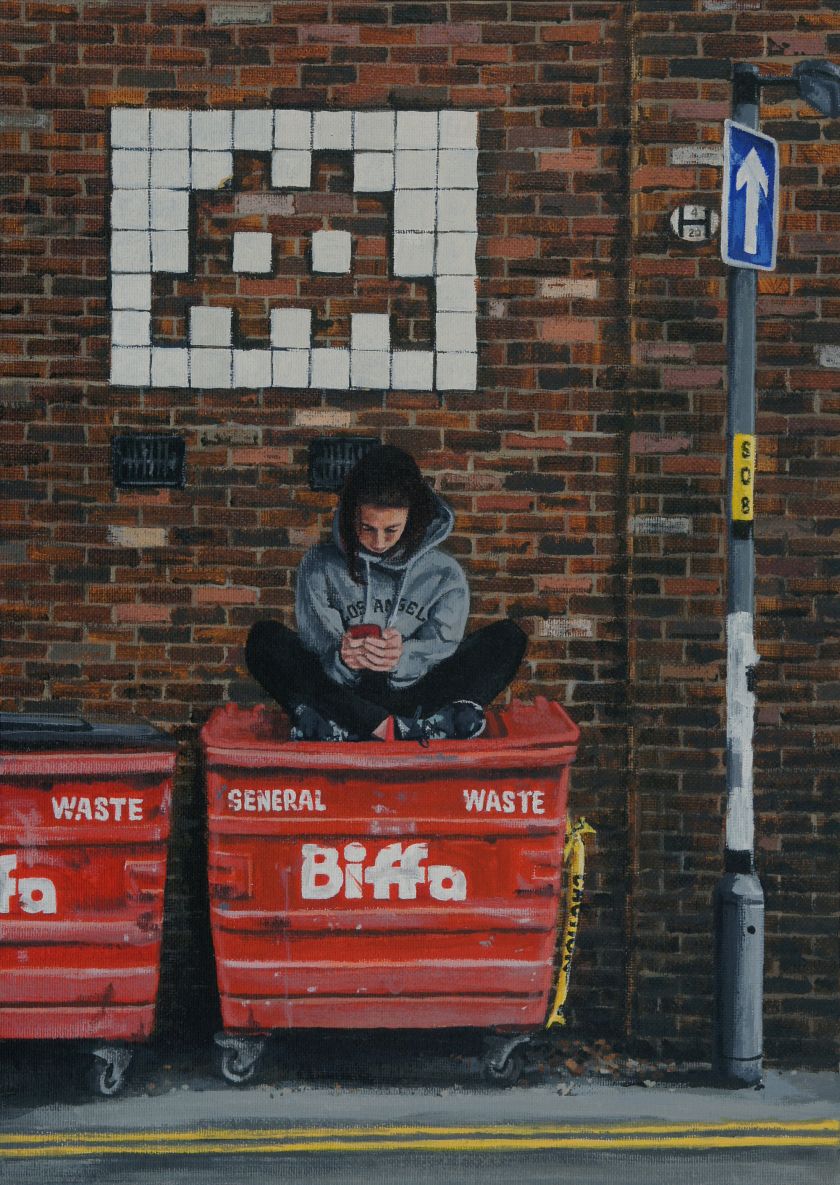 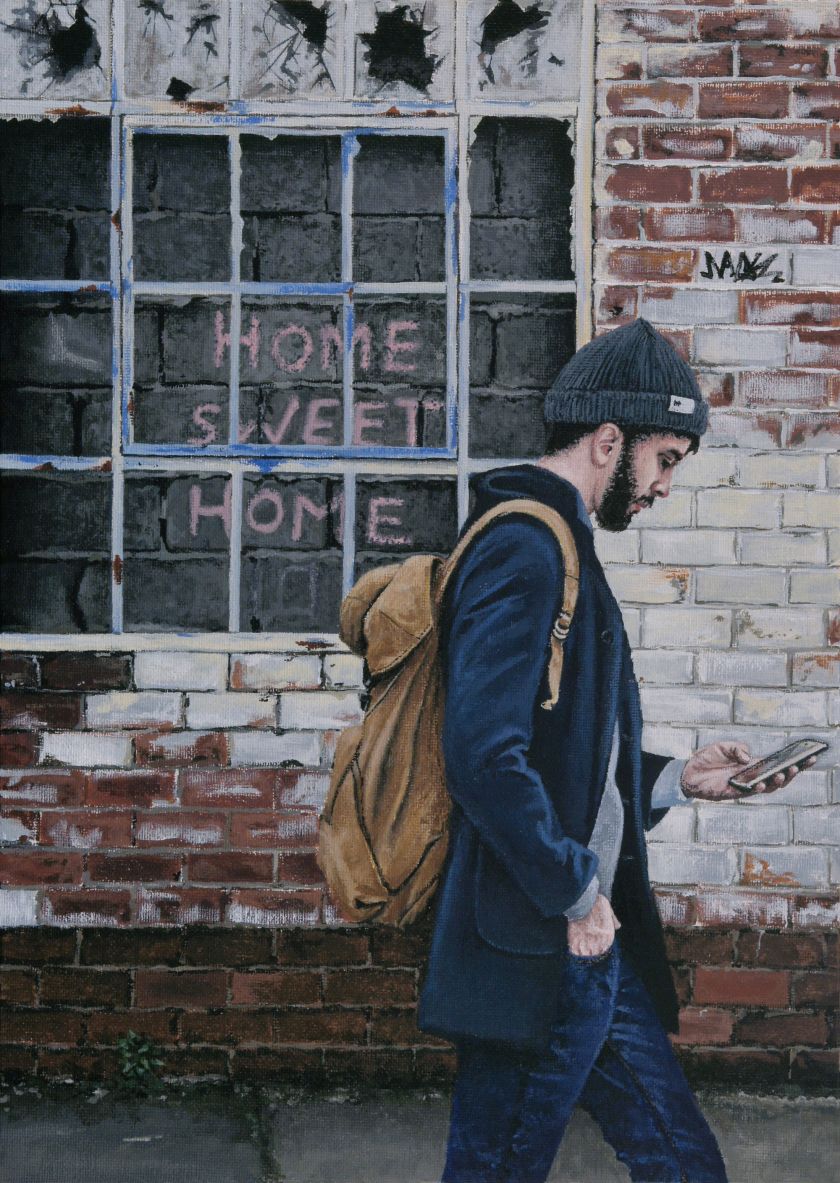 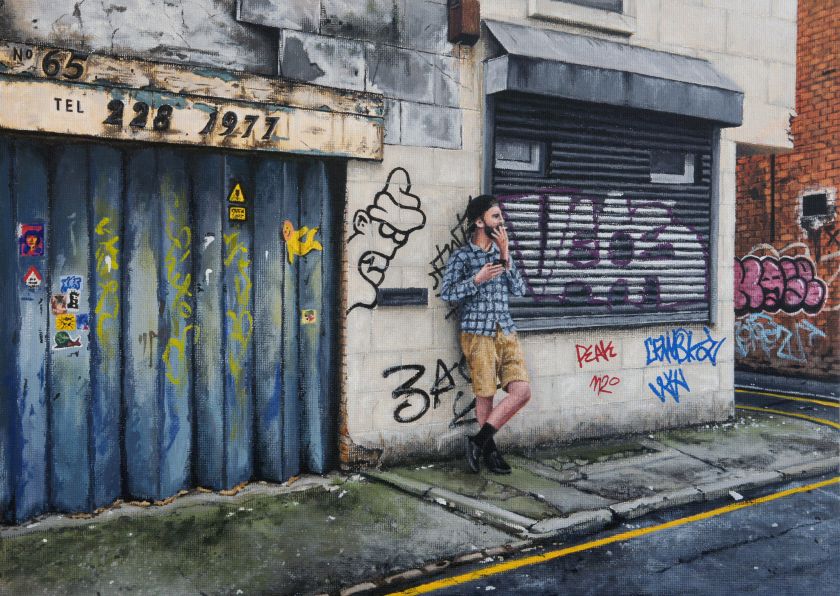