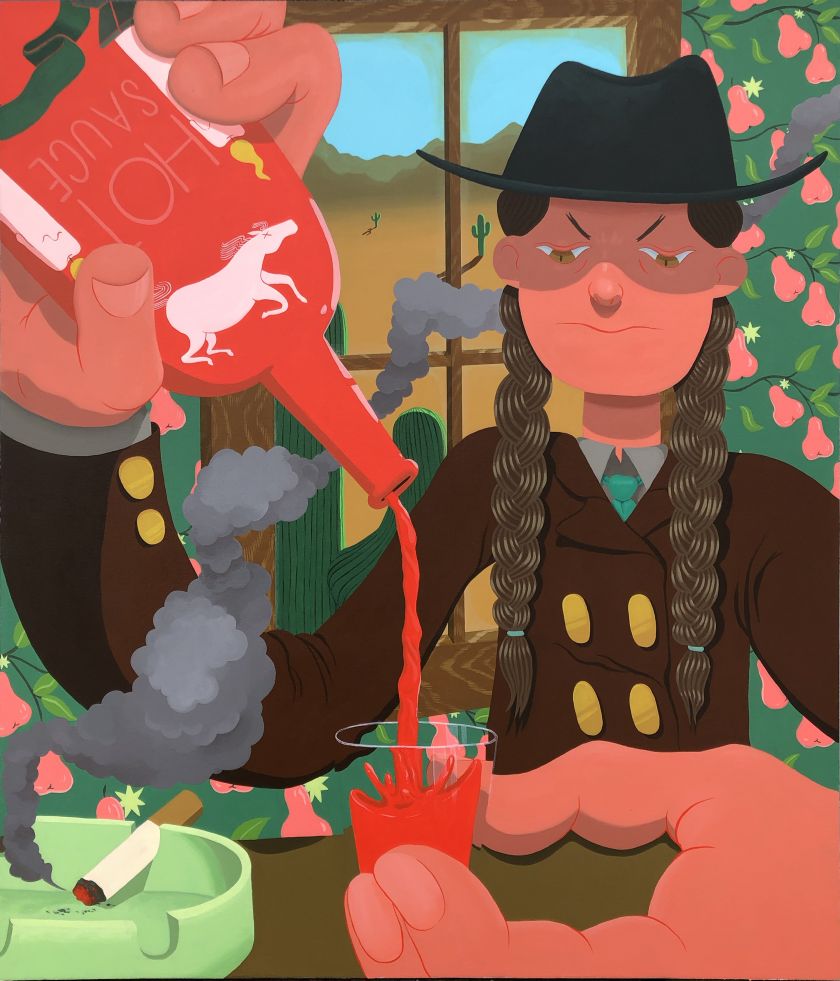 The New Jersey-based artist has undergone a few changes over the last year or so – a pandemic and a “horrendous break-up”, to name a few. But art has been her savour, and through her comical and animated artworks, she’s able to make sense of her past experiences.

Taking your first steps as a creative isn’t always easy. When decided to pursue her dream of becoming an artist, she packed her bags from Boston to New York City and found herself drained from her full-time job; she had no energy left to make art.

Switching to part-time and Victoria was finally able to make things for herself, and now, she’s completed a series of works under the theme of the wild west – the very first time she’s worked under a subject matter. Below, we chat with about her key influences and why she adds a touch of humour to everything she makes.

Tell us about your journey into the arts.

I grew up in New Jersey – first in the suburbs, and then we moved to a rural area when I was seven. Then I went to college in Boston and stuck around there for a while. I’ve very much lived an east coast life. After earning my MFA from Boston University, I moved to New York City thinking that it was the right thing to do as an artist. And it’s not that it wasn’t, but I struggled for the first year working a full-time job that was emotionally draining and not feeling like I had anything left in me to give to art-making. I would literally come home, make dinner and then eat it while lying in bed.

Eventually, I wrangled myself a part-time job to make just enough money to live on, which freed me to make art again. And so I started painting without any goal in mind besides simply making; I reasoned that to get any kind of opportunities to show (because everybody starts as nobody until they’re somebody), I had to first make things. If I just focused on making the things, then opportunities would come. When the pandemic hit, I moved back home with my parents but continued to make, and eventually, the opportunities did come, and I’ve had steady work since. 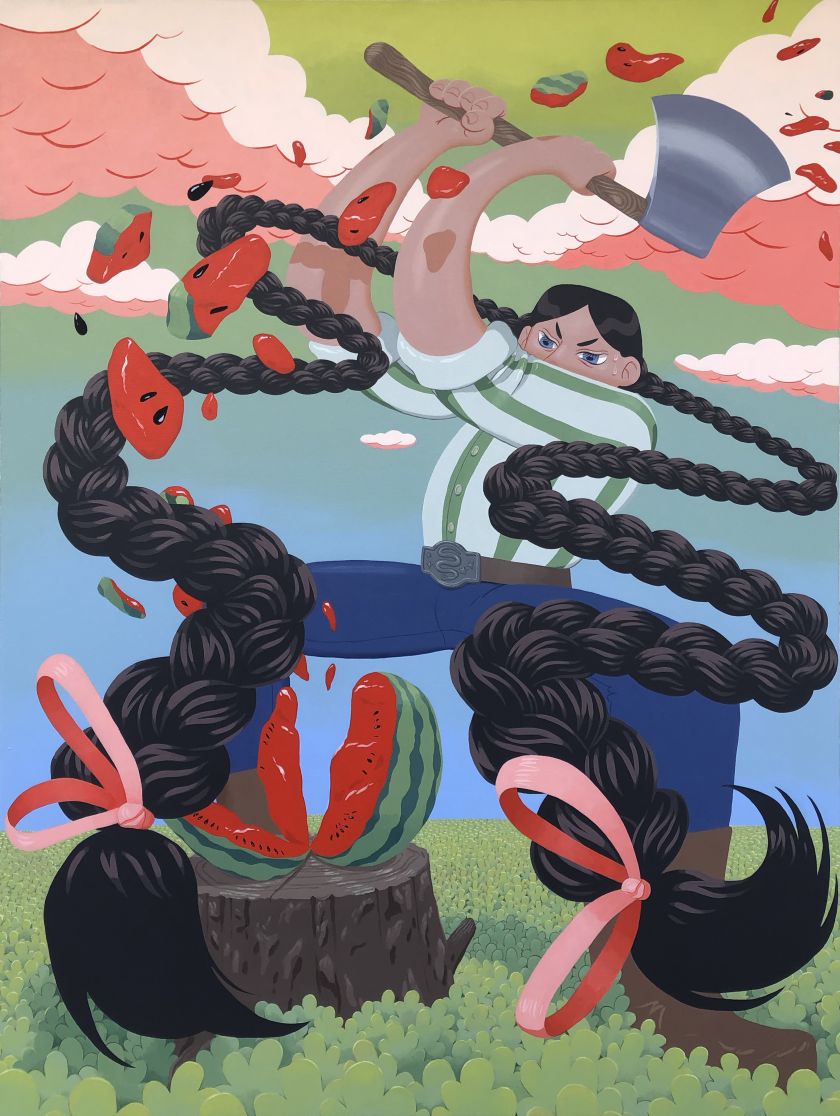 Is This Not How You Slice Watermelon © Victoria V Nunley 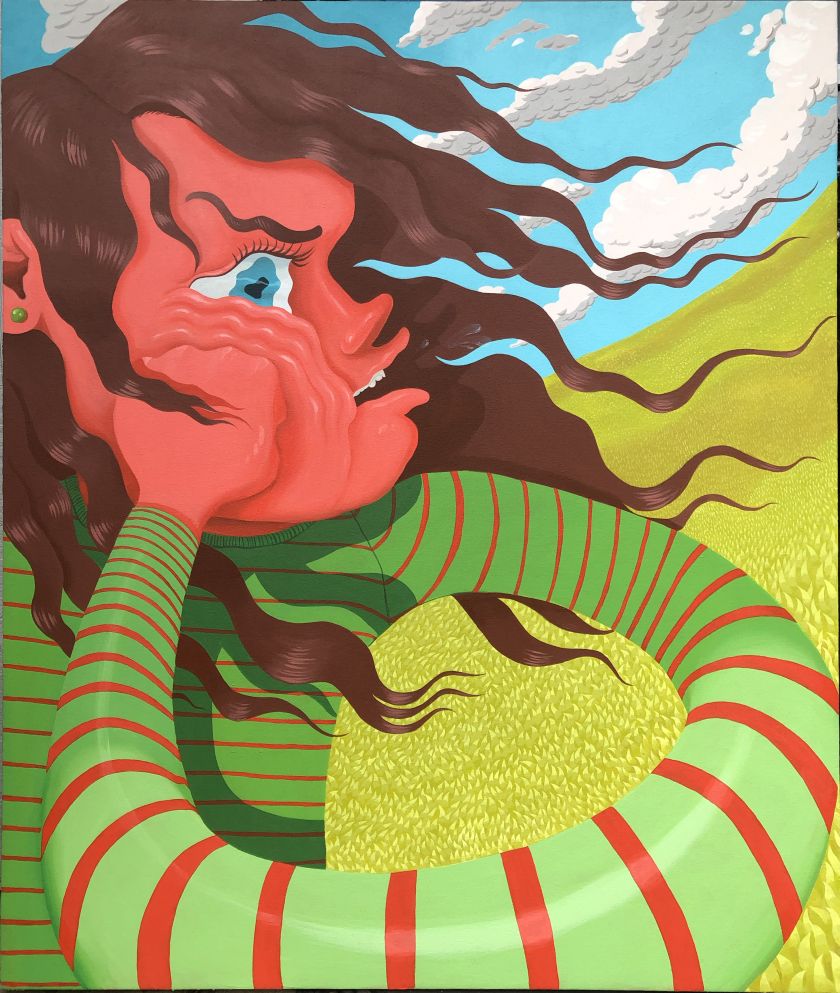 Where do you find your inspiration?

Well, currently, I’m making a series of paintings with a Wild West theme – it’s new for me to have themed paintings, but it has afforded a lot of freedom and creativity. It serves as an apparatus for content while also allowing me to populate my worlds with associated props and accessories and design fun things like belt buckles with coiled snakes on them.

It’s probably a surprise to no one that I watch a lot of cartoons and animation. I’m especially fond of shorts from the golden age of American animation and contemporary Japanese anime. They give me a lot of interesting ideas about composition and transformation. They also often play with visual gags that could only exist in a two-dimensional world, and I’m interested in moments like that. So marrying the wild west with these visual languages has stirred up a lot of really exciting visuals.

And all of this is a way to access, you know, the actual content of the work. I think good artwork has layers, so I think of my work as having three layers: the top layer, in this case, is the theme of the wild west, beneath that is the visual gag or humour, and finally below that is what the actual work is talking about. 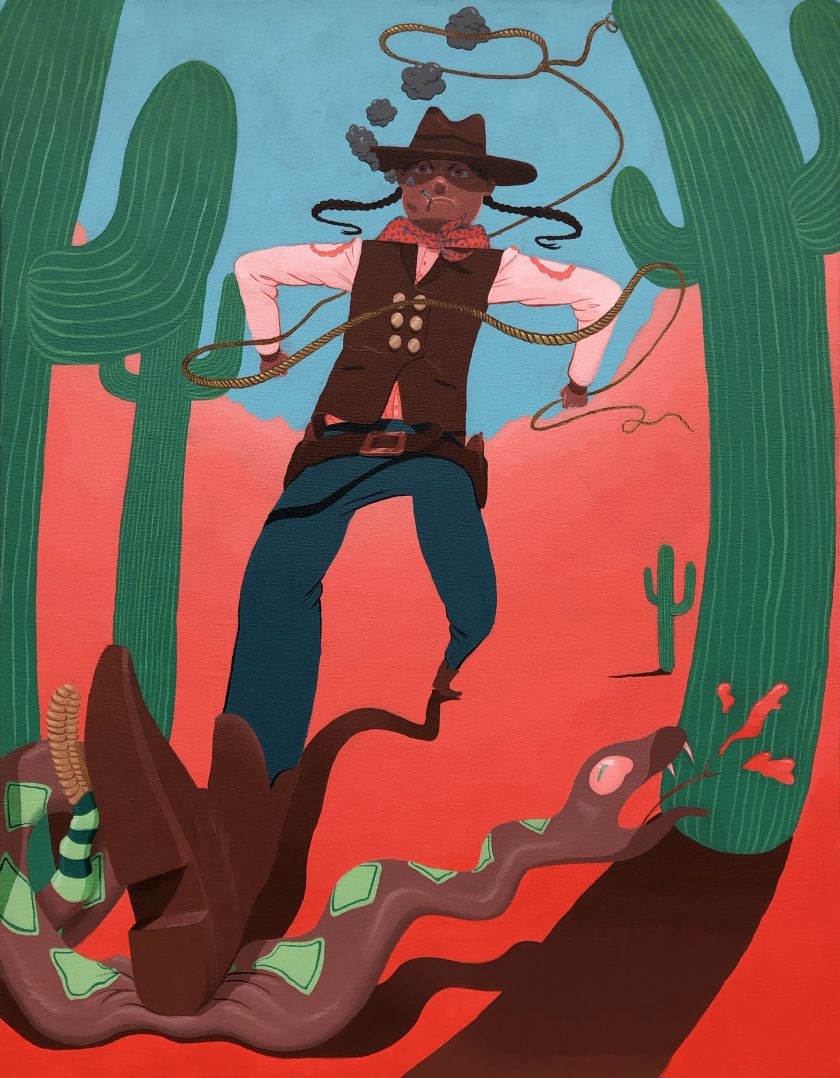 When You See Me Rollin Up, Pops, You Step Aside © Victoria V Nunley 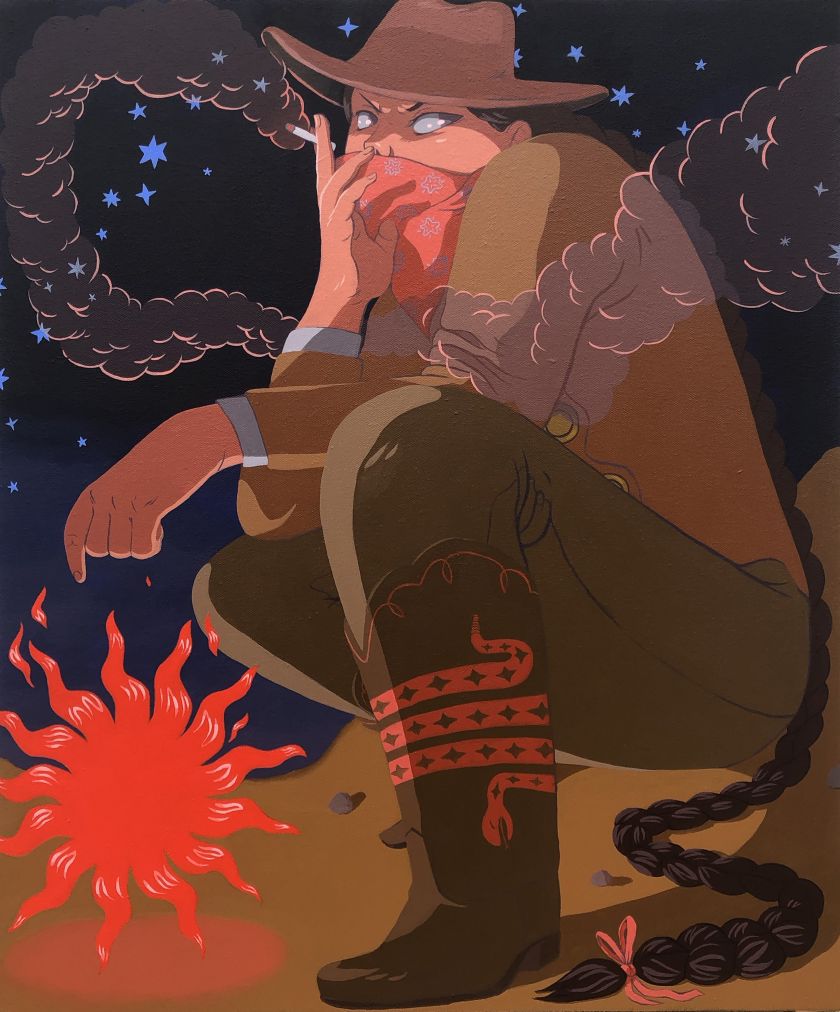 Can you tell us more about the themes you address in your work?

My recent work primarily addresses the struggle of doing interior, emotional work. To put it very bluntly, I went through a horrendous break-up right before the pandemic happened, and I was really going through it. I couldn’t have painted about anything else if I tried, quite frankly. So I wrestled with my own emotions like guilt, shame, fury and regret. I wondered about the coping mechanisms we employ to deal with things out of our control.

Now that enough time has elapsed, and I’ve moved on to a colossal emotional hangover, the question now is: what does it look like to move past self-recrimination and anger?

I also use humour in my work. It’s something I can’t quite shake and have fully leaned into. I think in person, humour is often used as a deflection tool, but in art, it does the opposite; I think humour has a rebounding effect that circles you back into the original point.

How do you go about making your pieces?

I start every painting with a small moment I can build a composition around. For ‘Is This Now How You Slice Watermelon’, it was that arc of watermelon chunks that comes closest to the viewer and then recedes into space. In ‘When You See Me Rollin’ Up, Pops, You Step Aside’, it was the space between her right foot in stepping into the foreground and seeing her tiny foot in the back. I usually draw the same sketch multiple times, moving things around to see what feels right. And then, as I’m drawing, the narrative enters.

I don’t usually know what an artwork is going to be about until I start drawing; usually, I’m just following a hunch. When I was younger, I used to do the opposite and start with what I wanted to talk about first and then build a painting. It resulted in a lot of really obvious paintings that weren’t very good. 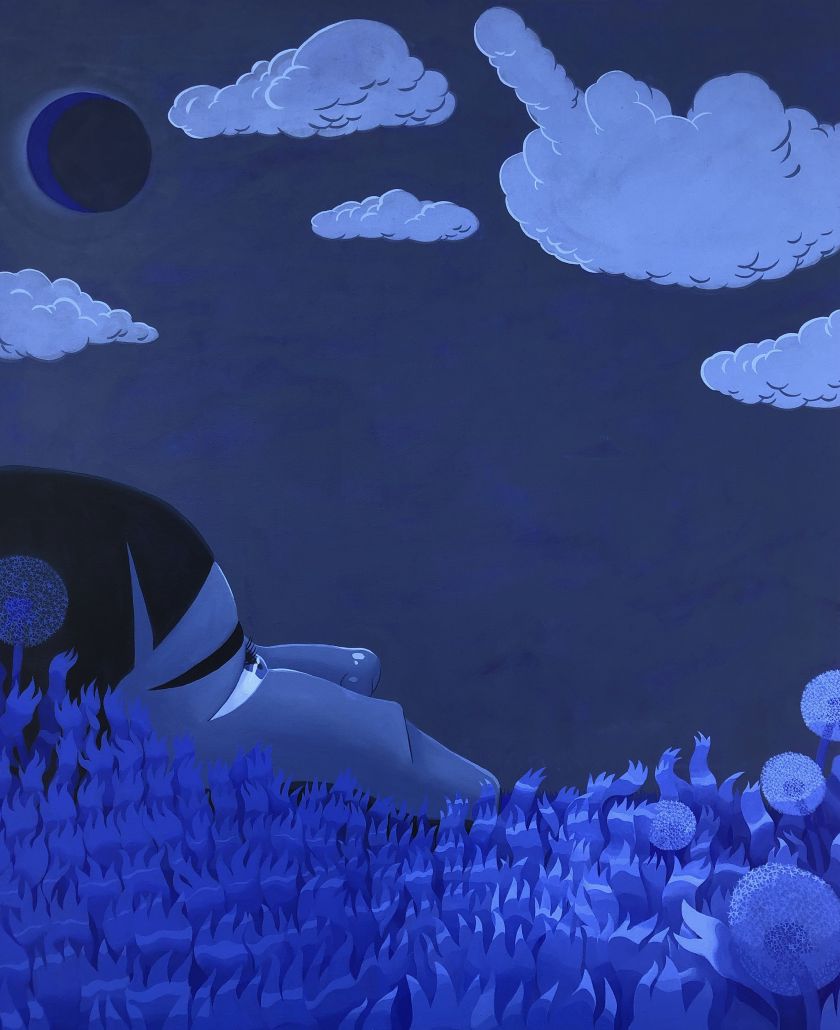 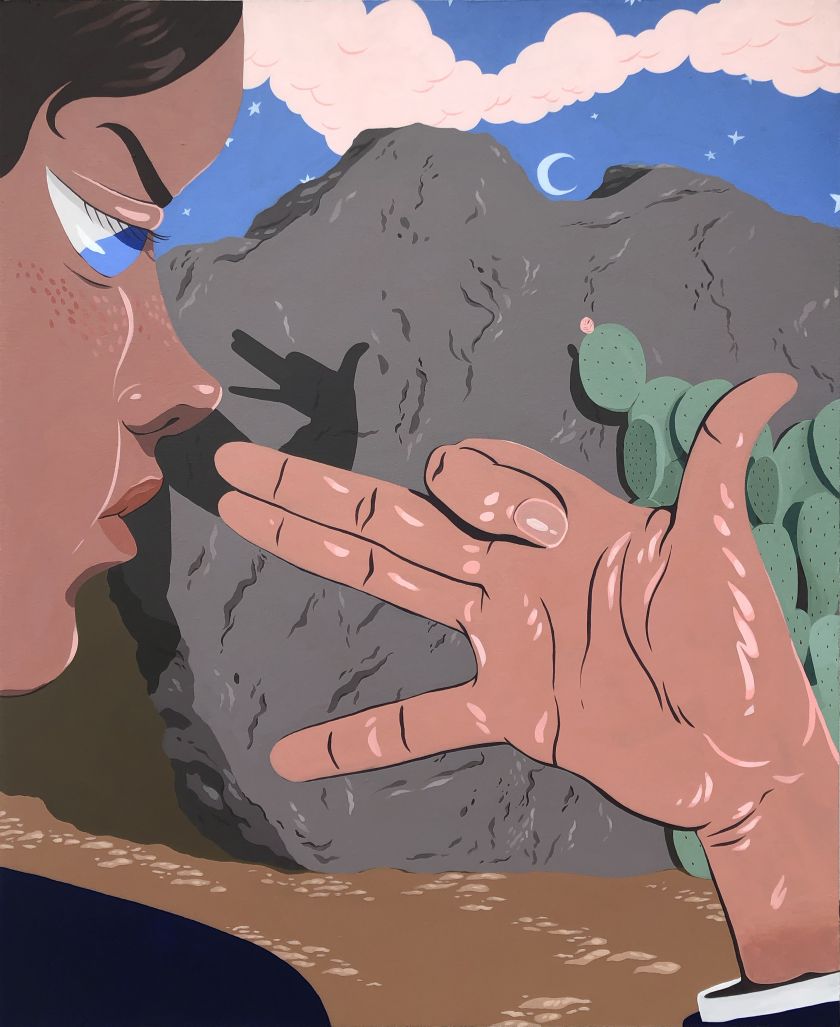 When Will This Dog Quit Barking © Victoria V Nunley

Can you tell us about a couple of favourite paintings?

‘I’ll Give My Stomach Something to Be Upset About’ is a definite favourite of mine; when I made it, I was like, “Yeah yeah yeah yeah!” I managed to pull off a lot of fun compositional moves like that huge hand pouring hot sauce in the foreground and following that noodle arm back to the figure, whose face is so much smaller than those gargantuan hands. I loved painting that fat, heavy smoke cutting diagonally back through the painting into the opposite corner. And then, of course, the wallpaper pattern of phallic pears. Because I think I’m hilarious.

‘Surprise!’ is another painting that still feels satisfying to look at, and I like the speed at which your eye follows that arm around to where the fist connects with her face. I often think about composition in terms of rhythm. I think this is the painting that best expresses the immense shame and self-blame I was feeling at the time. It’s also the first painting of mine that uses violence in this series, which I’ve returned to recently. And I also think it hits a particular pitch between humour and brutality that I like.

I’m currently working on my solo exhibition with Moosey Art in London this upcoming February 2022. 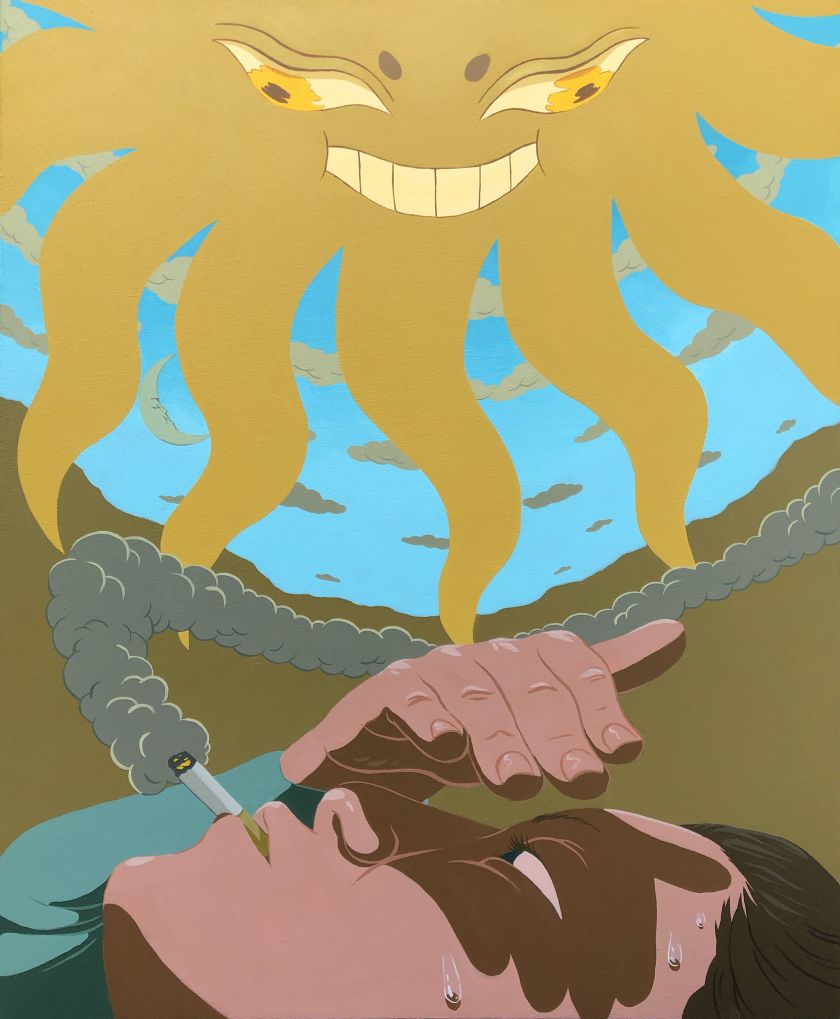 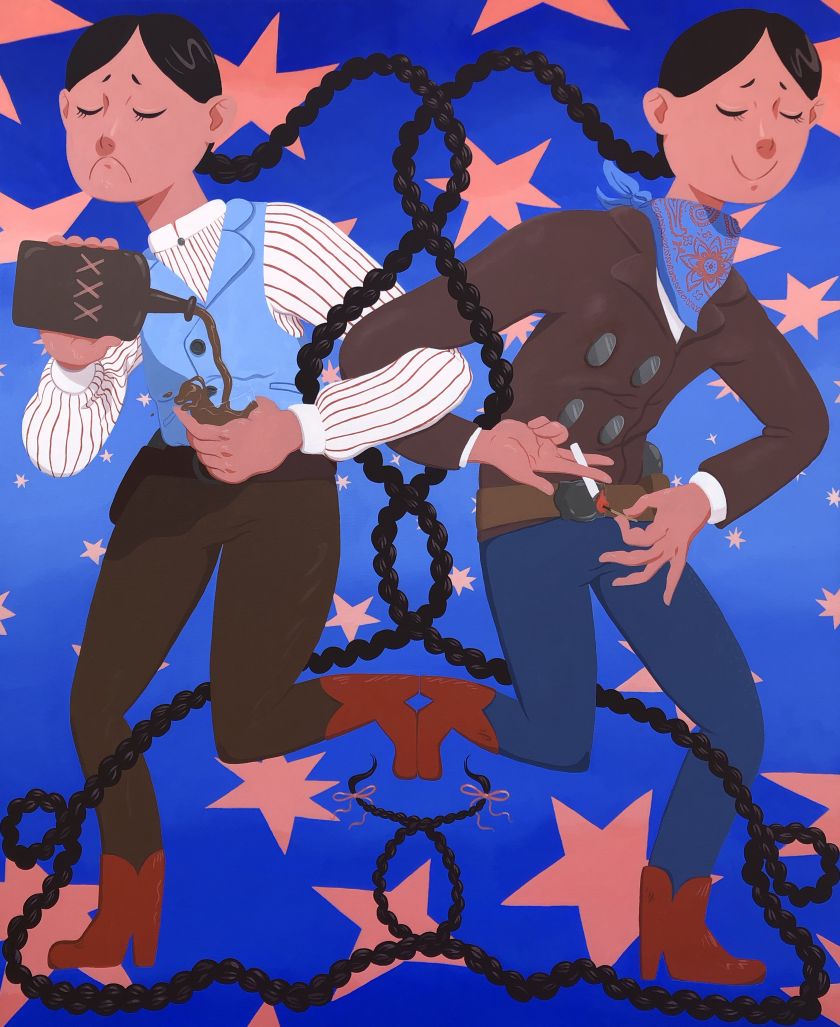 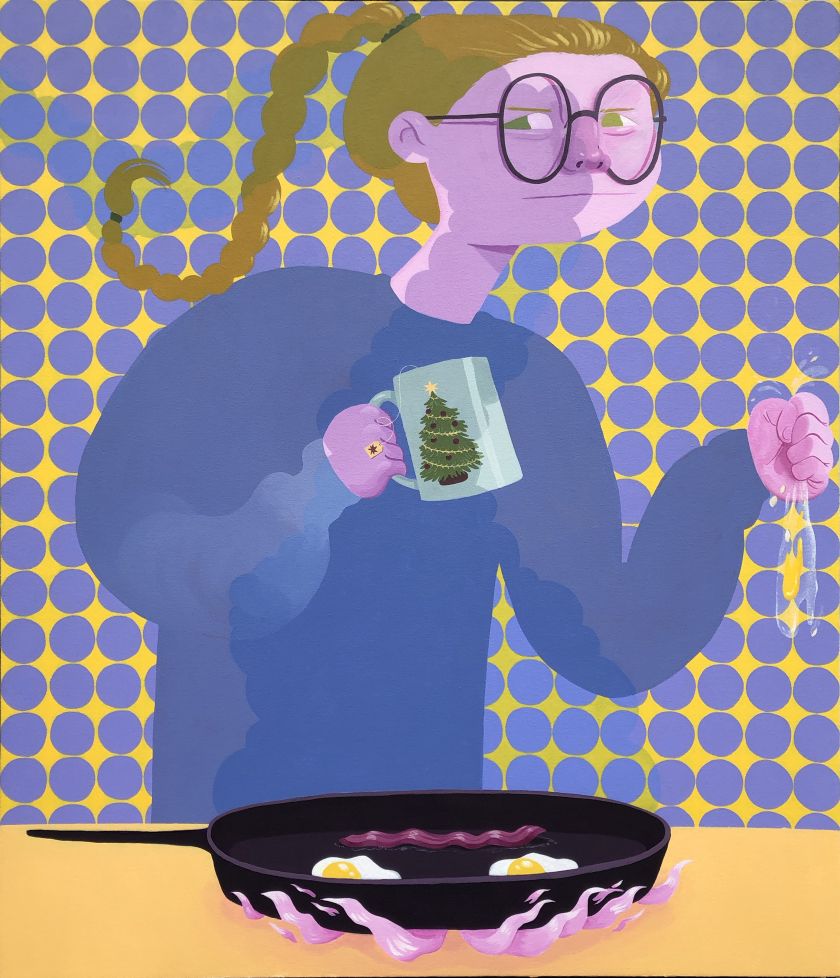 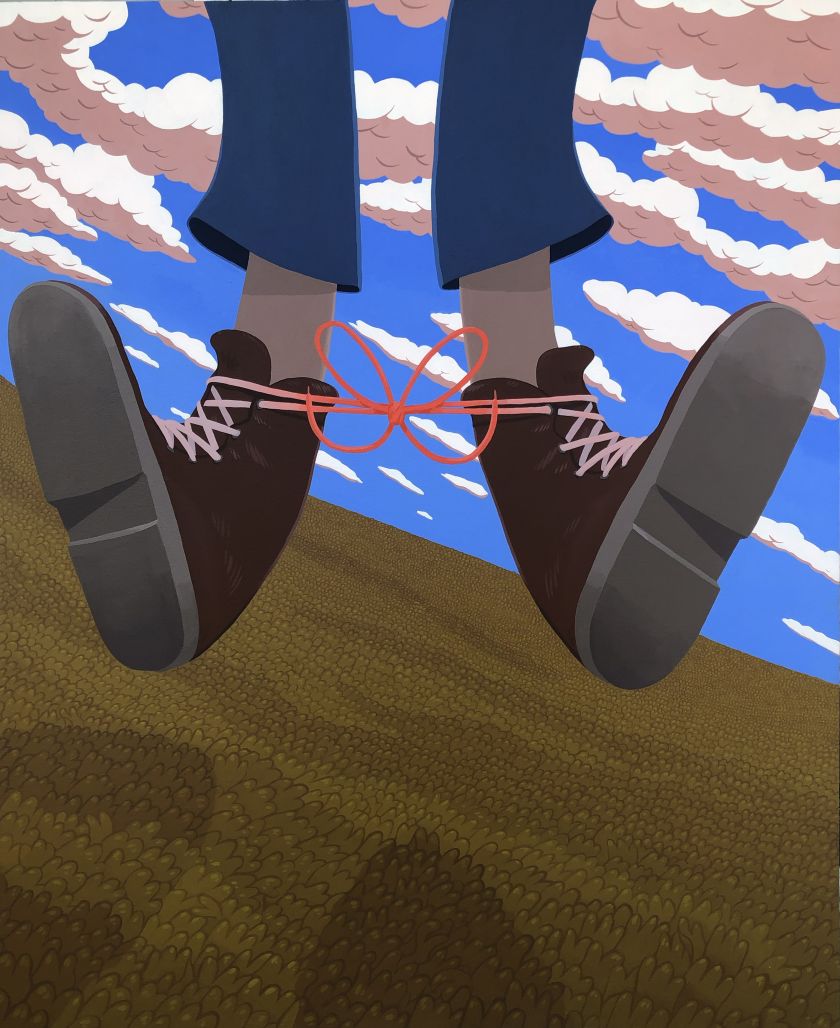