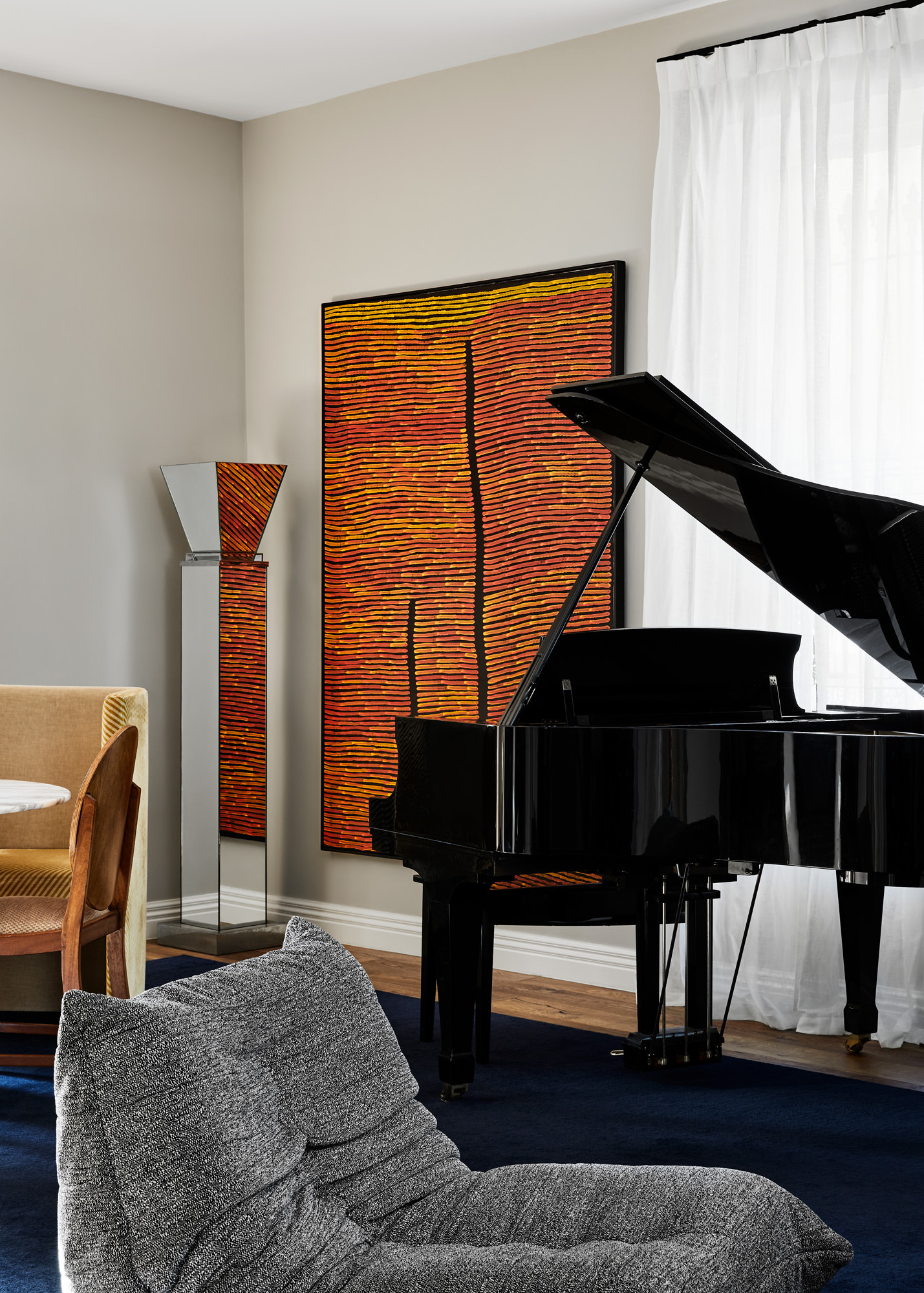 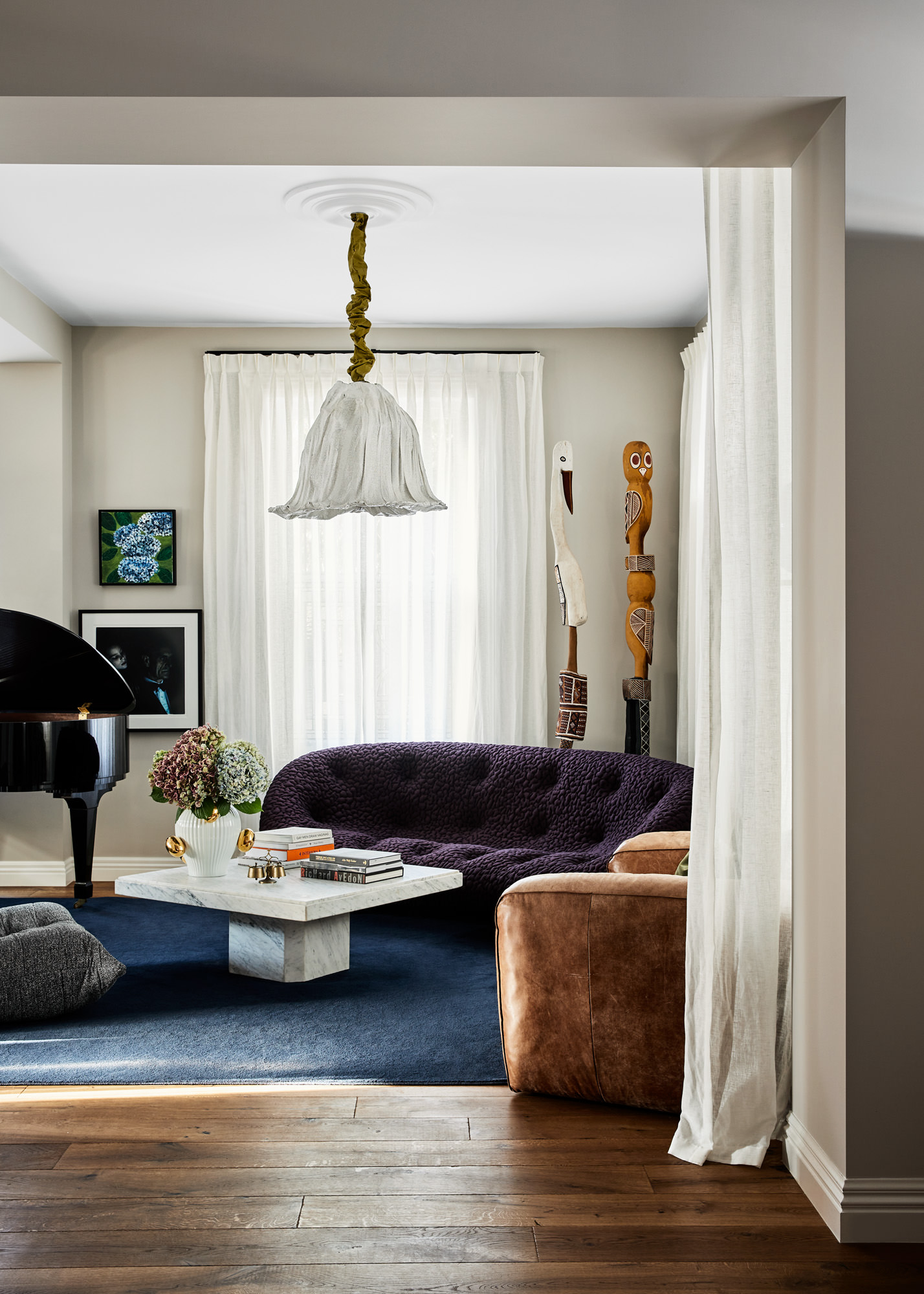 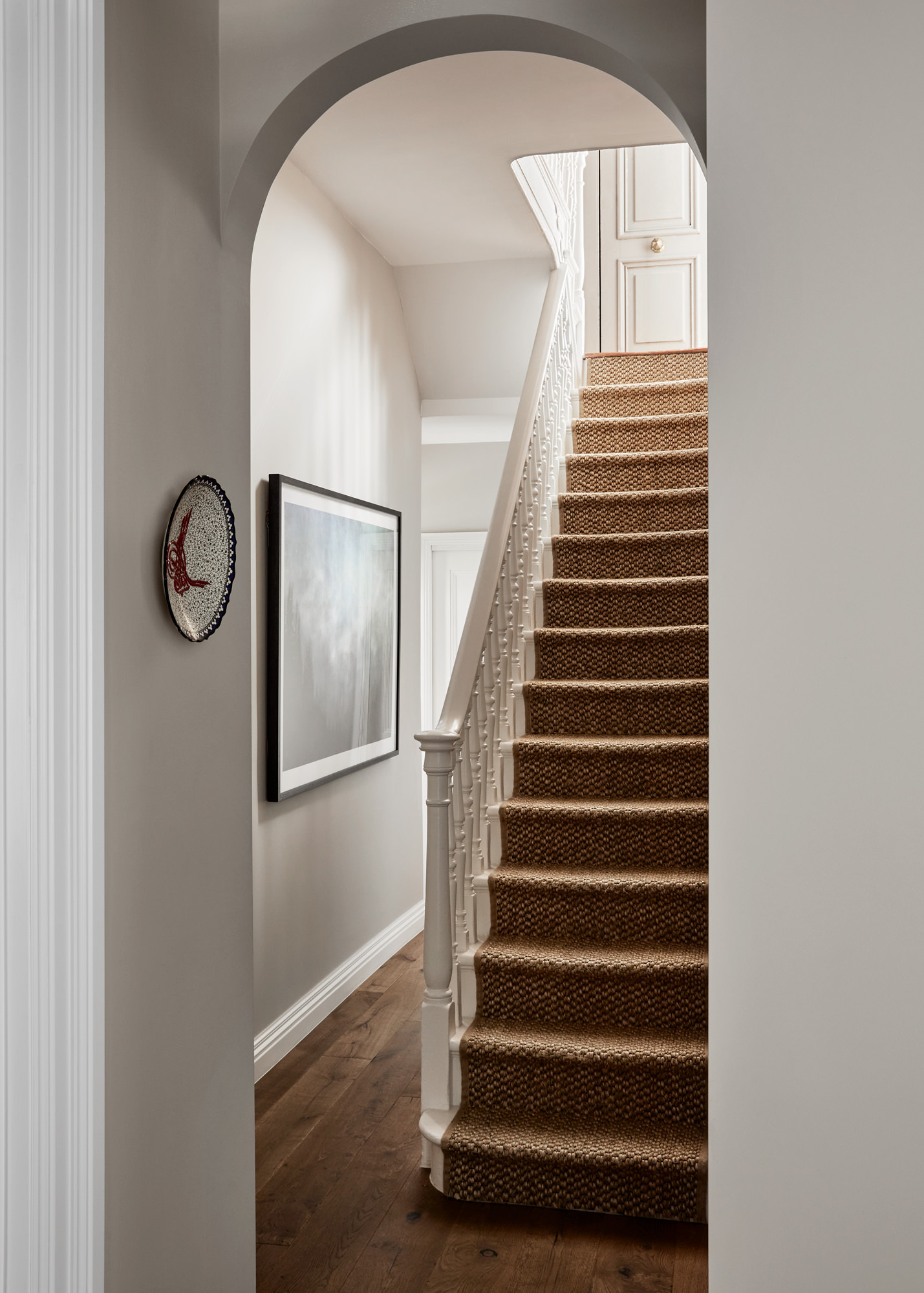 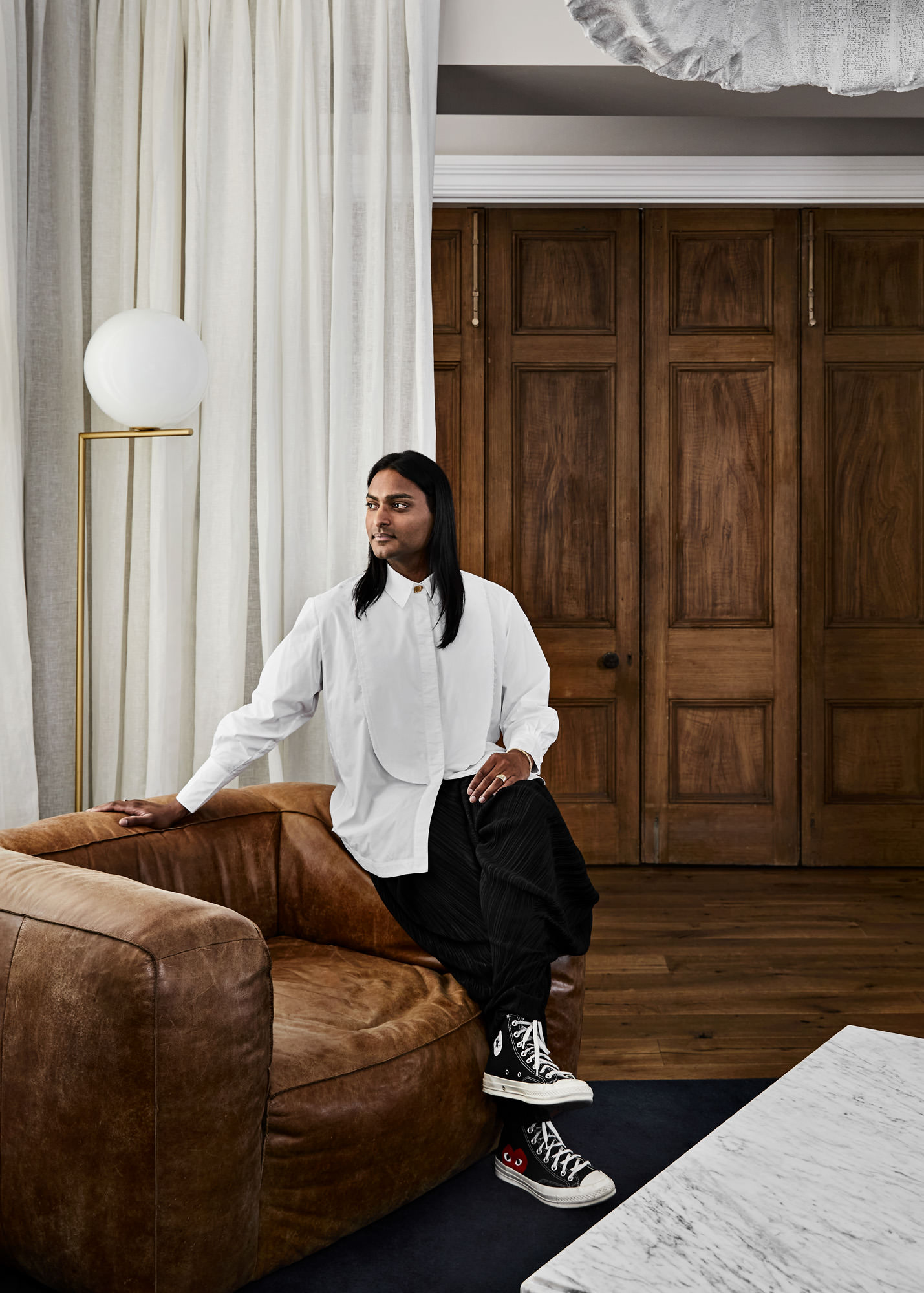 In the heart of old , sits an 1860s house that blends right into its surroundings. Originally constructed as a boarding house, it is slim in its build and vernacular in its appearance. But the interior is a surprising antithesis. “The houses of this era were built for workers of the Victoria Markets and industrial Docklands area. So the fact that the clients have a penchant for collecting vintage and historic art and architectural pieces fits perfectly with the home’s heritage,” says interior designer , who was brought on board to lend his magic touch.

Since its inception, the once-upon-a-time boarding house has undergone a modish metamorphosis. After being used as a boarding house in the ’50s and a corner shop in the ’70s, the property lay low for a few decades before assuming a swish new identity—“described by the current owners as a ‘brown laminate explosion’”—in the ’90s. But the house had since stayed largely the same. “The clients had already lived here for seven years, but it was time to introduce a sense of order and clarity, bring in more light and circulation, and lend shape, definition and a rightness of proportion to the home,” says Brahman. 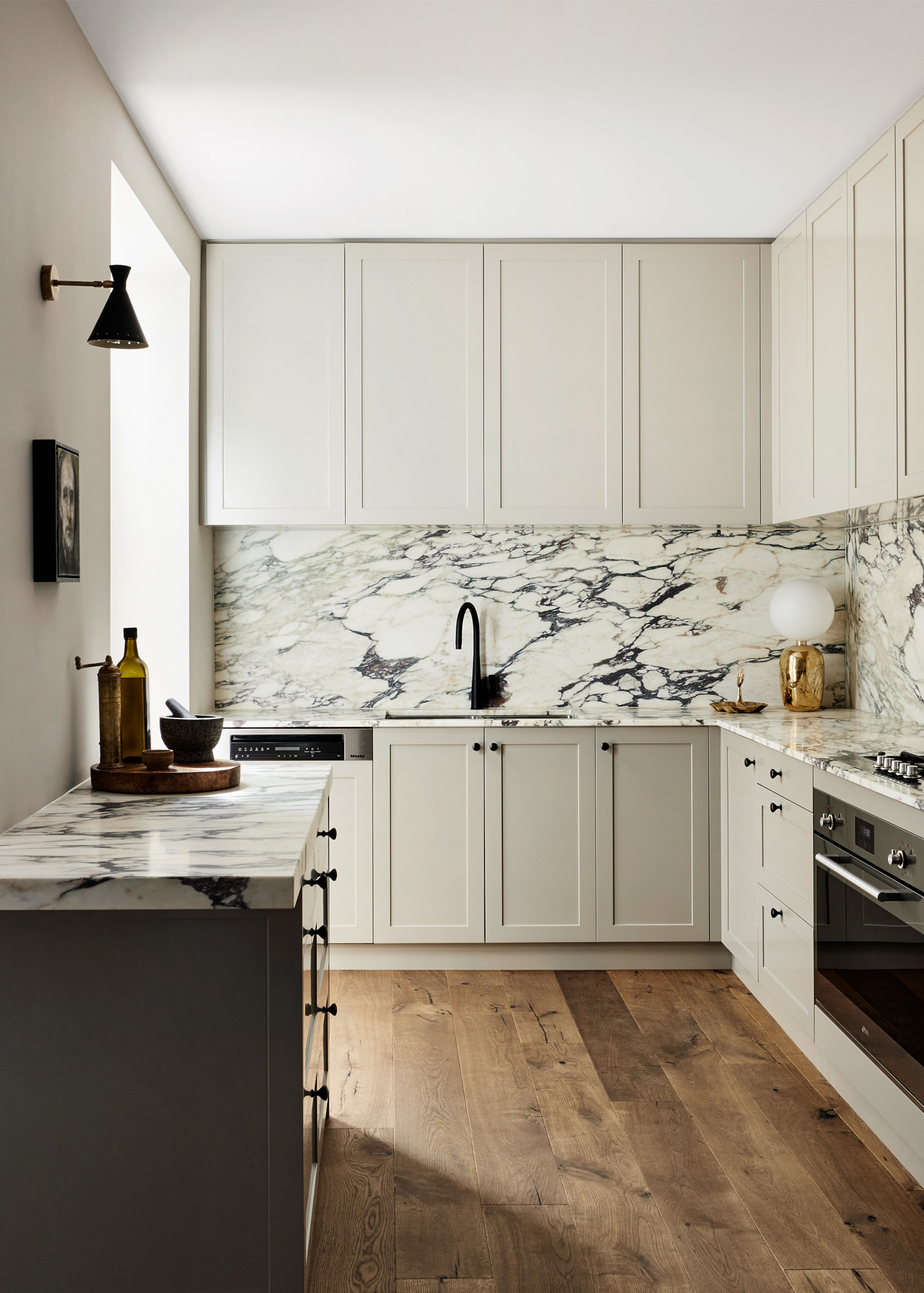 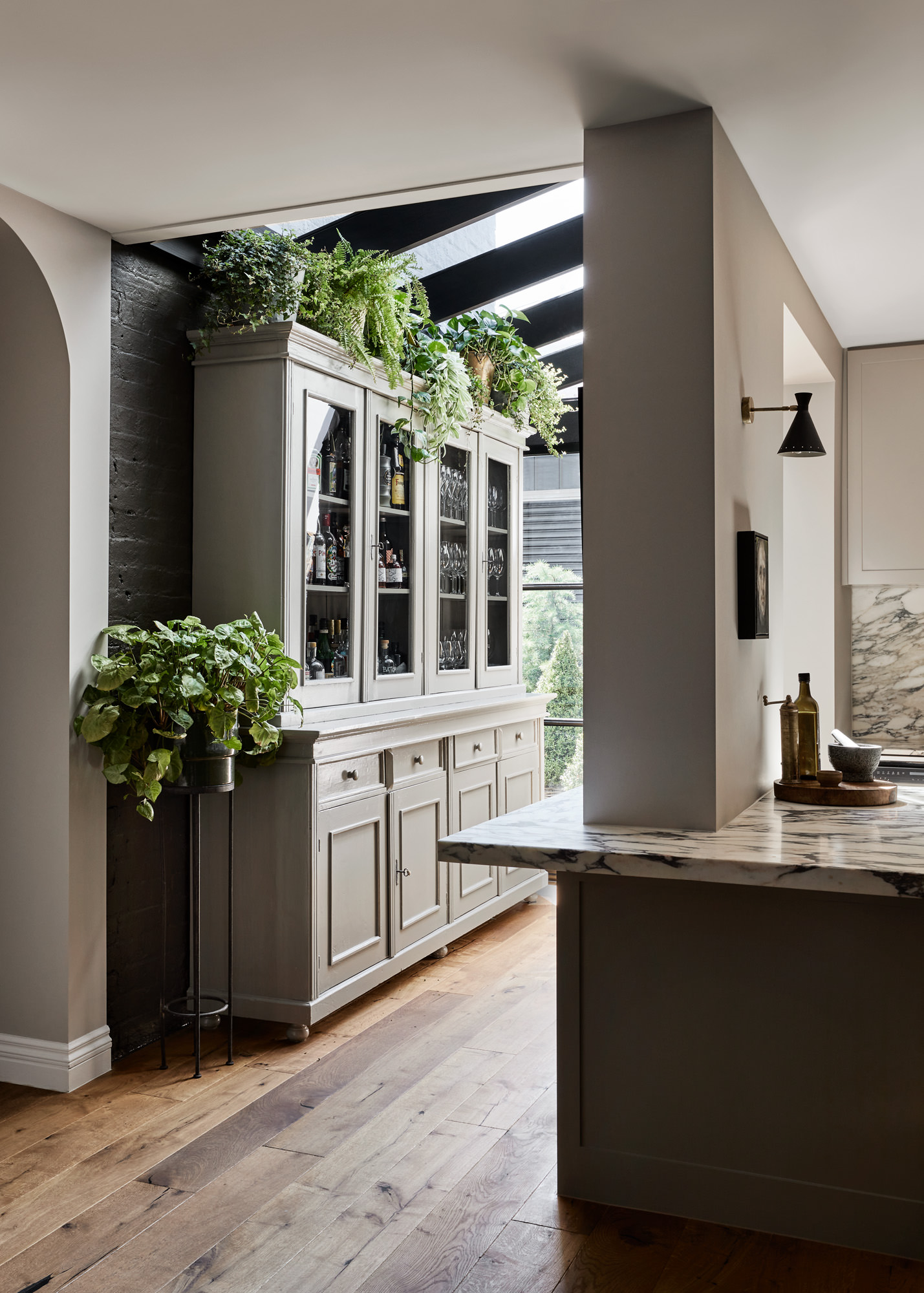 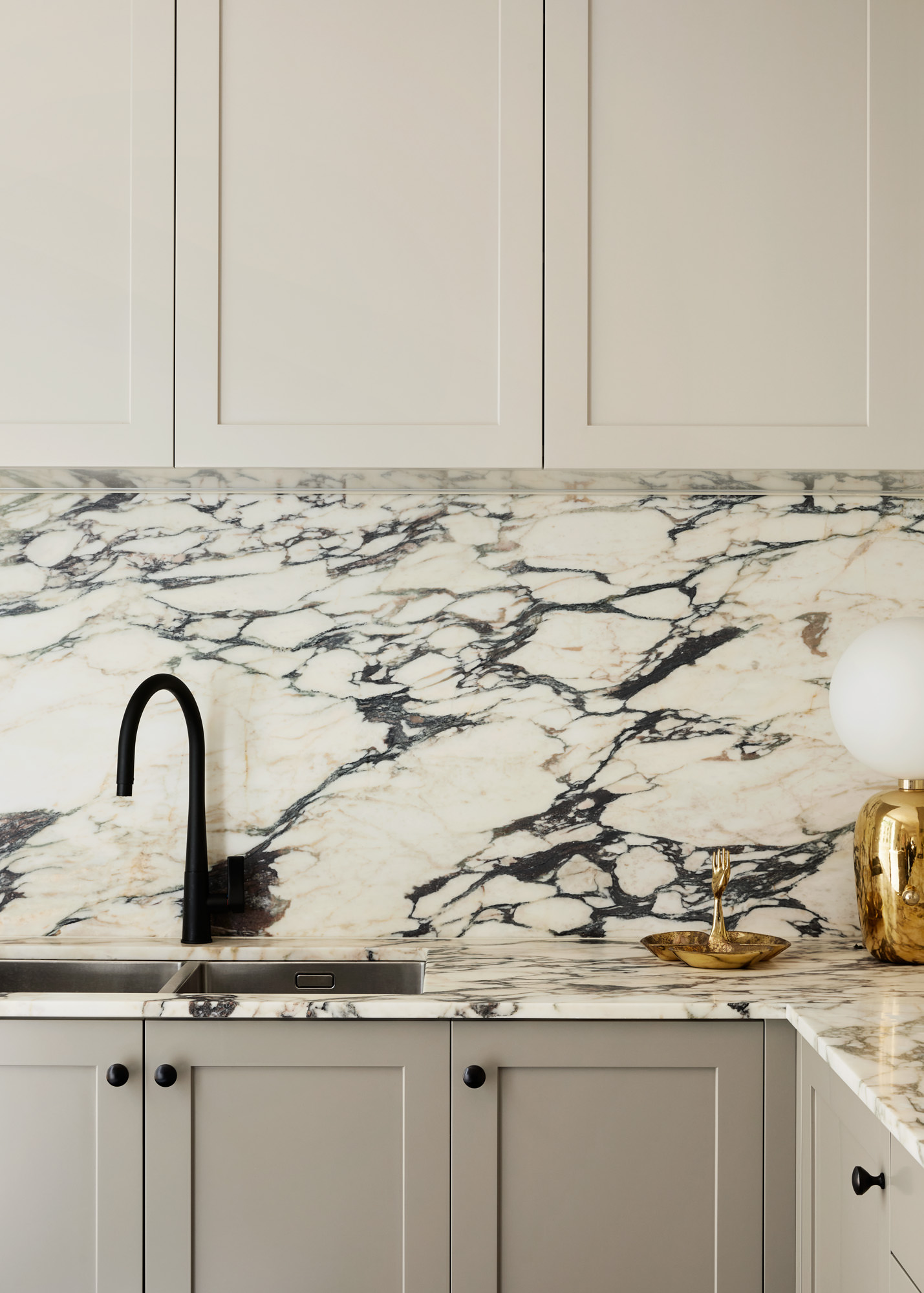 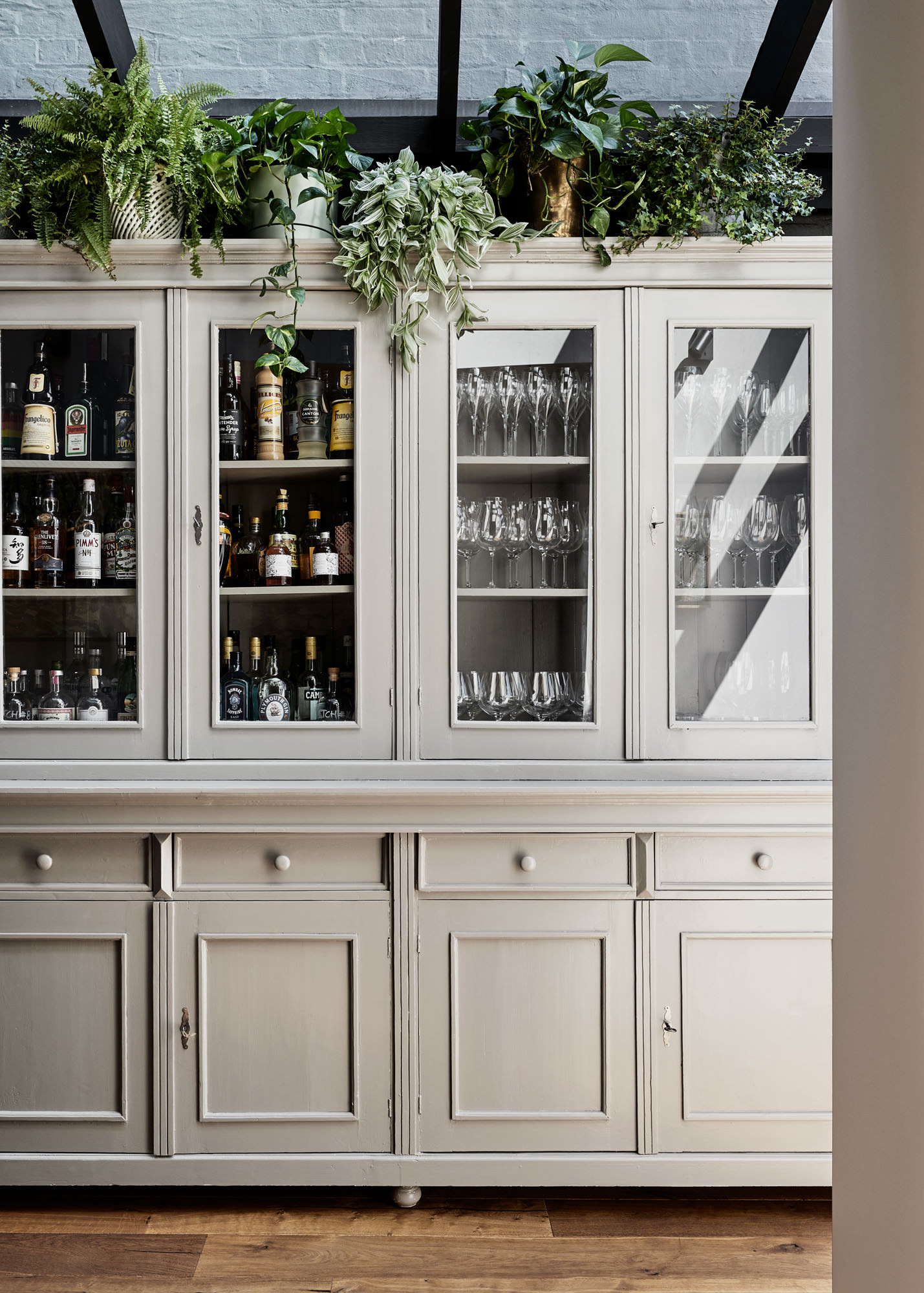 When it came to the home’s design vocabulary, Brahman took cues from the clients’ eclectic art collection. “Sifting through all their auction finds in the storage shed, so many pieces were just waiting to be rescued and used in the right context,” he says of the clients’ boxed up treasure trove. And so began a spectacular garage excavation: Out came solid timber accordion doors, candy-coloured stained glass windows and long-forgotten gems. “The finds were lovingly dissected, curated and employed in creative and cohesive ways,” says the designer. By the same token, the 2.6-metre-high doors found new life as shutters for the dining room, while the landing gained a stylish stained glass window that aesthetically bridged the twin terraces.

The home’s design vocabulary is equal parts old and new, with newer acquisitions carefully chosen to complement existing ones. “Many of the pieces look random and unconnected, but in reality, the combination weaves a rich landscape,” Brahman says. 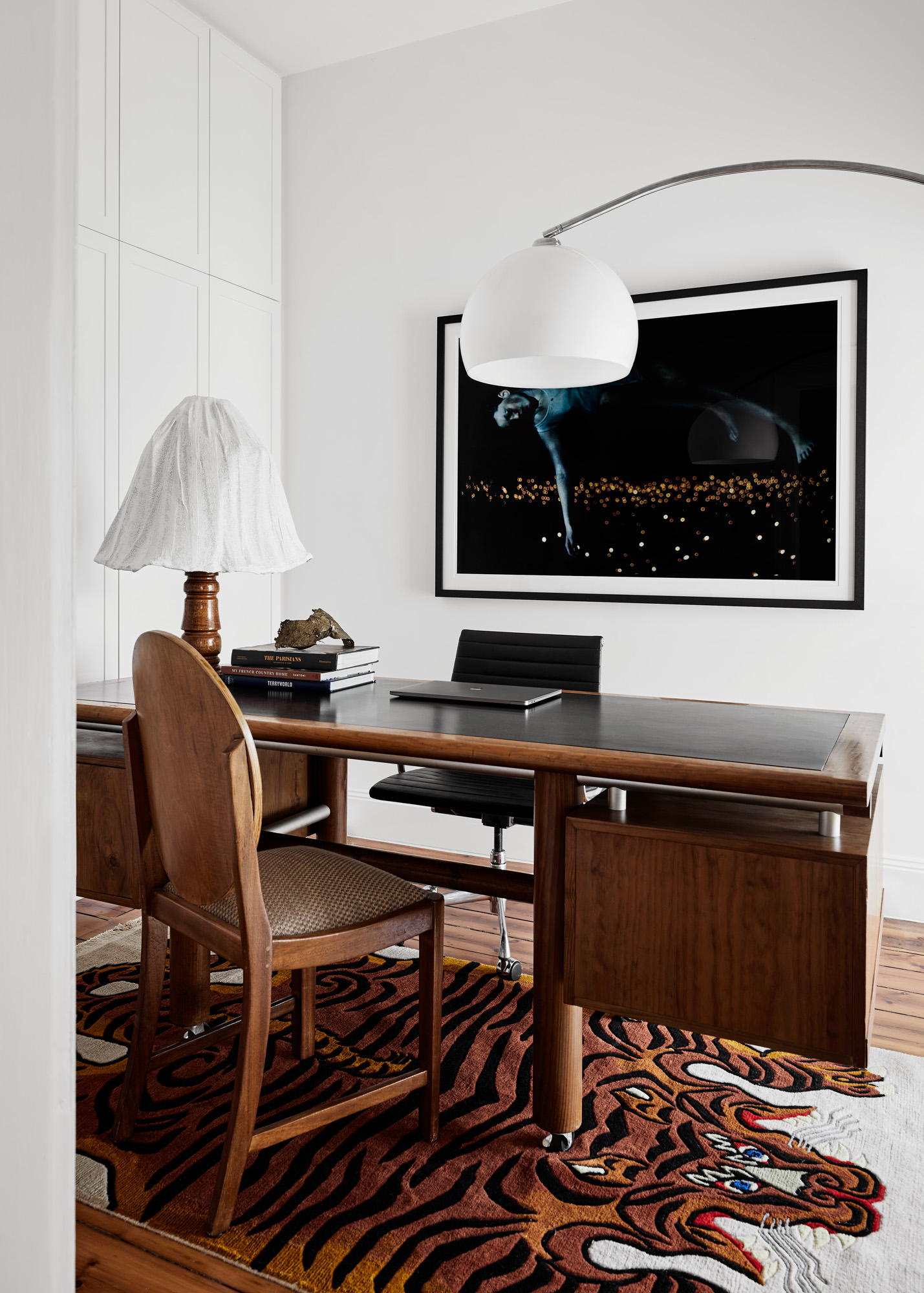 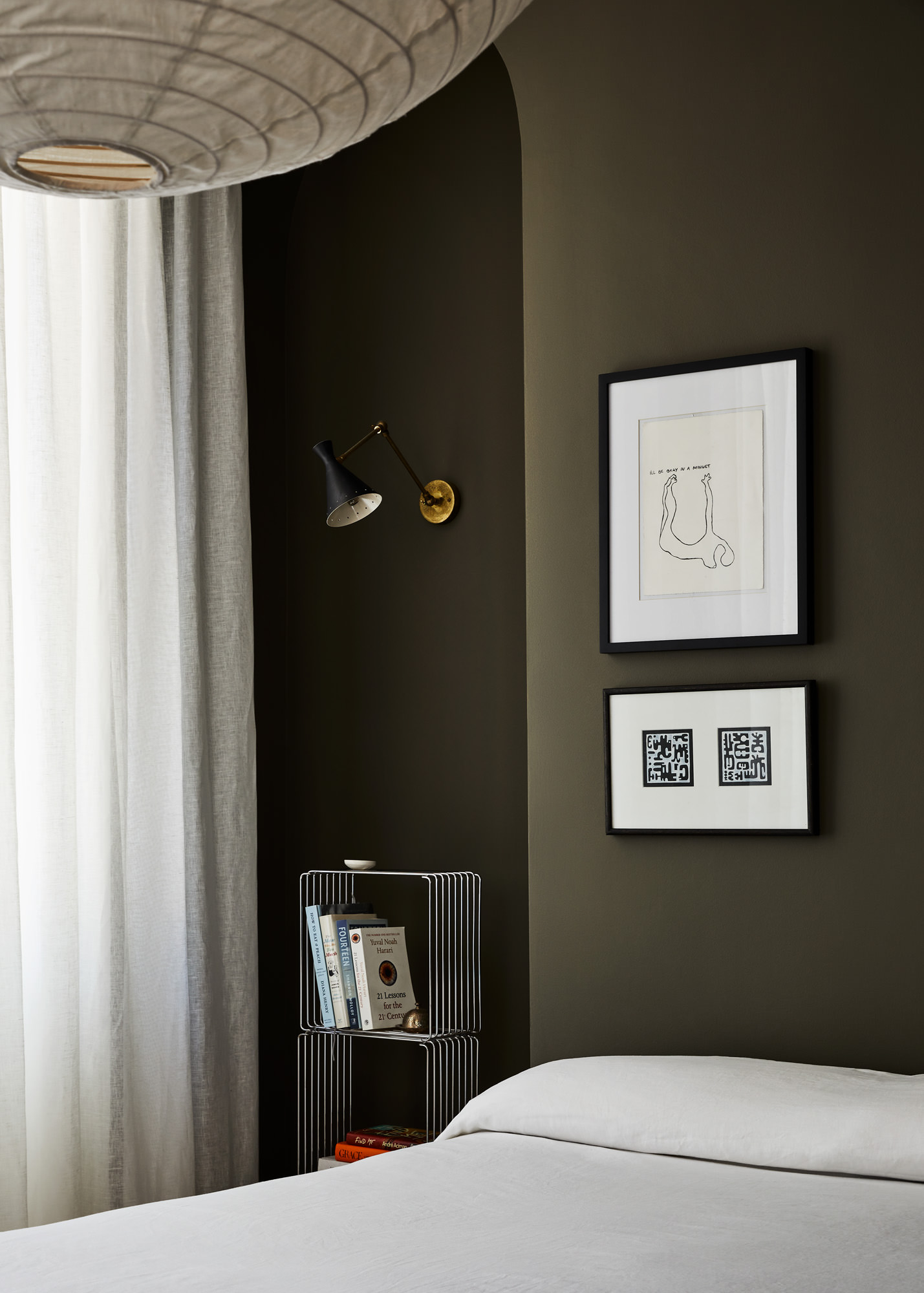 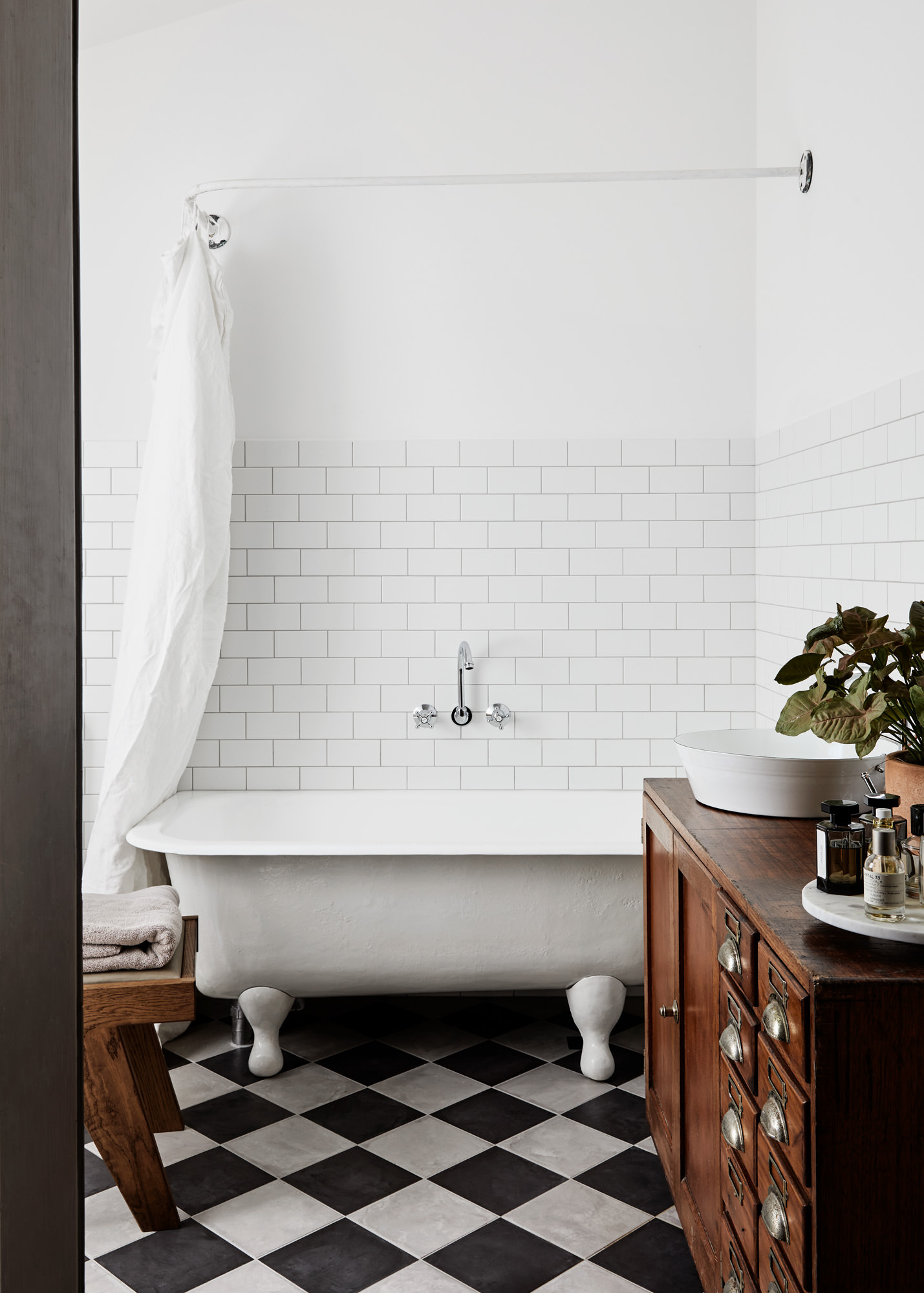 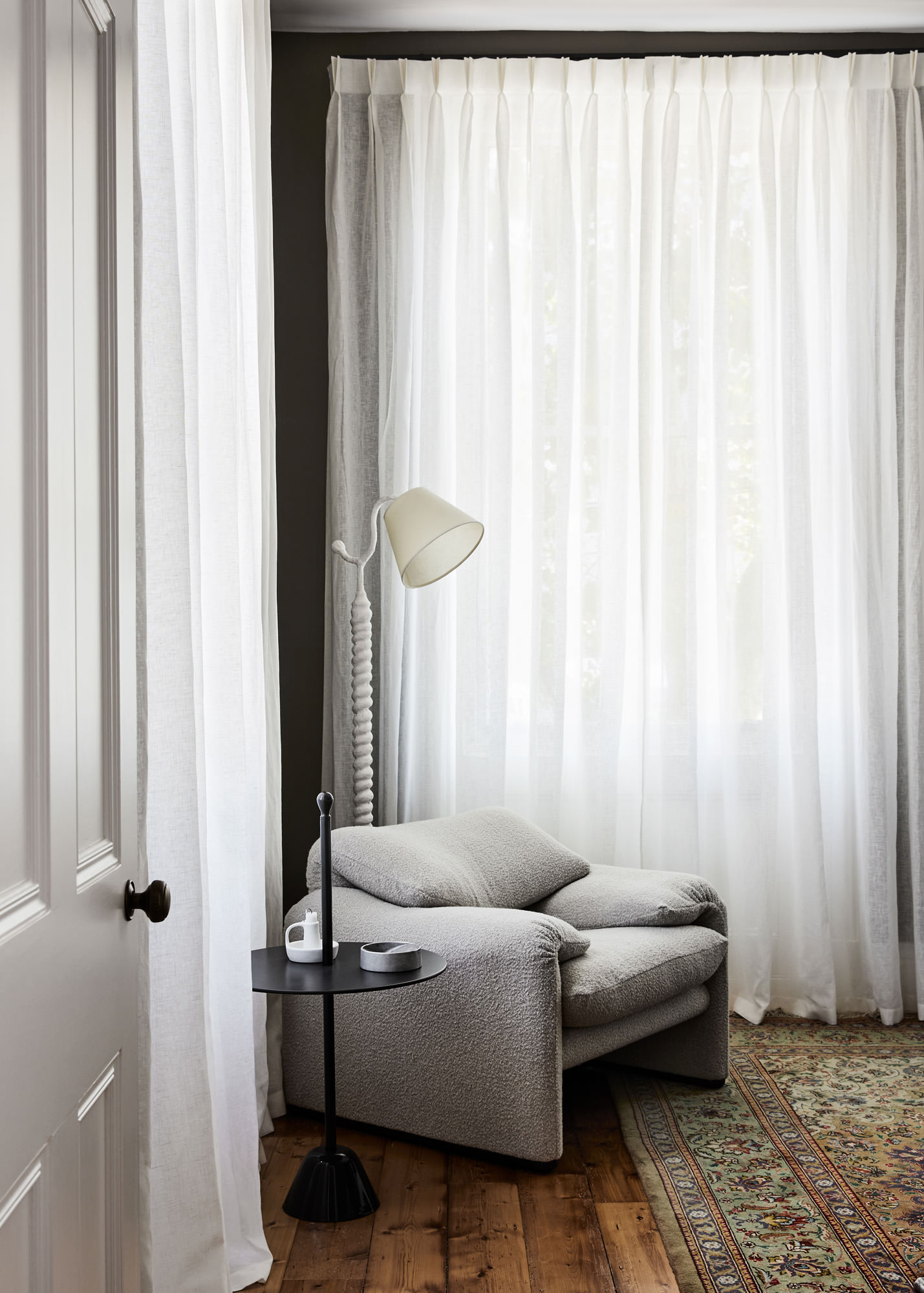 In the living room, a royal purple Plum sofa punctuates a corner, cutting a dramatic figure against the Carrara stone coffee table from Smith St Bazaar. Auction-bought marble tables come together as an intimate breakfast nook, while a custom loveseat by channels a queenly throne. Fabric walls softly cocoon the spaces, adding a nice tactile edge. Some lighting fixtures, such as the skirted pendant in thin layers of plaster, were custom-made by Brahman. “That particular piece is based on my obsession with Cecil Beaton’s photography,” he laughs. The lamp, in itself, is a piece of art, but when turned on, the soft diaphanous light it projects does a far greater job of drawing the eyes up to appreciate the height of the room. In true Brahman style, the additions hold a mirror to the clients and their design journey, rather than merely pandering to passing trends.

For Brahman, the house will always be a work-in-progress; complete, yet incomplete. “The couple will continue to dress and undress the spaces with new art, furniture and styling as they grow and enjoy their home. I think this should be true of any space–it’s never ever ‘done’, as we are never ever ‘done’. That’s the beauty of creating a base palette for clients like this, so their own personality can grow with the interior,” he concludes.