Who Was Marie Curie? Learn More About This Pioneering Nobel Prize Winner 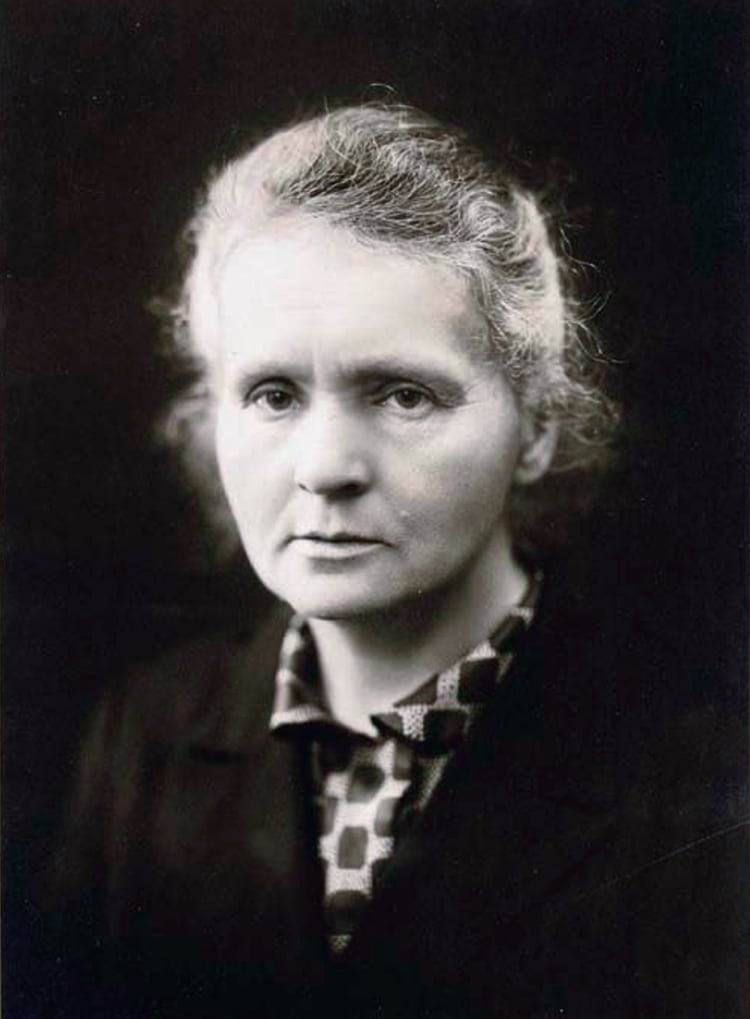 Polish-born researcher and professor Marie Curie is arguably the most well-known female scientist of all time. With an intellect that would have been exceptional in any age, Curie was also remarkable for her achievements in fields dominated almost exclusively by men during the late-19th and early-20th centuries. A woman participating in physics, chemistry, or academia was by its very occurence a pioneering feat. Thankfully, Curie’s accomplishments have largely escaped the frequent pitfall for barrier-breaking women—that they are remembered more for their gender than their contributions to their field.

Curie’s name has largely become synonymous with the study of radiation. This research likely contributed to the aplastic anaemia which caused her premature death at age 66. Madame Curie handled radioactive isotopes without modern safety procedures, which themselves grew out of her discoveries. Her work, however, has saved countless lives. Radiation therapy is used today as a treatment for certain cancers; Curie was the first to attempt this medical use based on her study of radioactive isotopes in her lab. As the first woman to win a Nobel Prize—and the only person to ever win two in separate scientific fields—Curie is one of the most decorated and respected scientists of any gender. Read on to learn more about the life of an extraordinary mind.

Academic from an Early Age 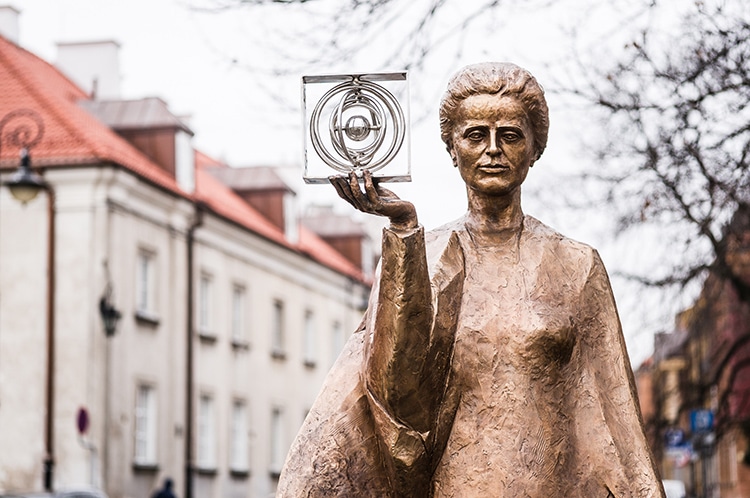 A statue of Marie Curie holding a model of polonium. The statue is in Warsaw, Poland—Curie’s home country. (Photo: from HUANG ZHENG/Shutterstock)

Curie was born in 1867 in Warsaw, Poland as Maria Salomea Skłodowska. The young woman’s father was a mathematics and physics teacher, while her mother ran a school for girls. Despite being well-placed for an excellent education Curie faced several major obstacles. The first, of course, was her gender. She received a high school education at a girl’s gymnasium—women were not allowed to attend the local universities. Her Polish nationality (of which she was always proud) posed another issue. Poland was under the control of Russia, and her family had a history of involvement in the Polish resistance to imperial rule. In pursuit of higher education, Curie attended an underground learning institution known as Uniwersytet Latający, or the Flying University.

The Flying University was affordable but clandestine. Originally designed for women to attend, the classes also served as a way to keep Polish culture and academia alive under Russian rule. Despite the ingenuity of the Flying University’s model, Curie and her sister Bronisława both wished to study in Paris. She worked several years as a governor and tutor in Poland to support her sister’s medical training in Paris. After her sister’s marriage, Curie continued working, studying, and reading. Her first laboratory work was conducted in her cousin’s chemistry lab in Warsaw the year before she left Poland. In 1891, she departed her homeland to join her sister in Paris to take her next step in academia. 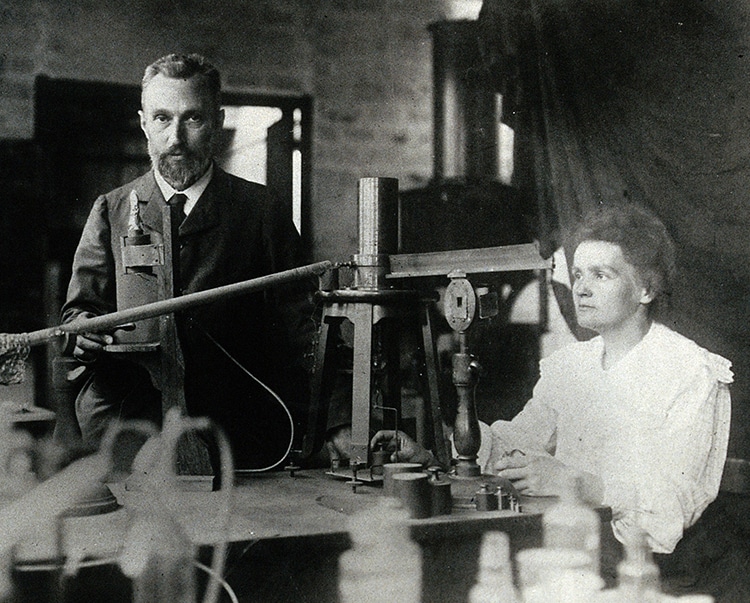 Pierre and Marie Curie photographed in their lab circa 1904. At the time, they were on their way to discovering radium. (Photo: , Public domain)

In Paris, Curie became known as Marie (Maria in French) and enrolled at the University of Paris where she focused on physics, chemistry, and math. By 1894, she had achieved two degrees. She was studying magnetism when she met another scientist named Pierre Curie who taught at The City of Paris Industrial Physics and Chemistry Higher Educational Institution. Marie joined Pierre’s lab, and he soon fell head over heels for the brilliant young woman. Far from prioritizing his own career, he offered to return to Poland with her if that was what it took to convince her to marry him. However, Marie’s career opportunities were limited in Poland, so the couple remained in France. They wed in 1895.

A Woman in a Man’s World 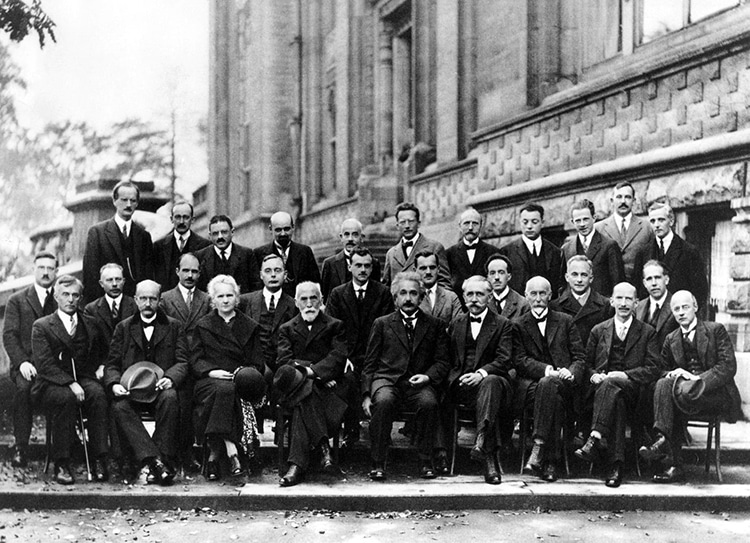 The fifth Solvay Conference on quantum theory in 1927. Curie is third from the left in the front row. (Photo: , Public domain)

Working with her husband, Curie began the work required to obtain her PhD. The French physicist Henri Becquerel had recently discovered puzzling rays emanating from uranium. The German scientist Wilhelm Roentgen had also first documented the existence of x-rays. Both phenomenons would become the central questions of Curie’s studies. However, being a married woman in a man’s world was difficult in an age when middle and upper-class mothers typically remained at home. In 1897, Curie gave birth to a daughter, Irène. Despite being a new parent, Curie was actively researching other elements that emitted mysterious rays. Her husband joined her, and together in 1898 they published their discovery of the elements polonium (named for Poland) and radium.

The Curies described the elements’ mysterious waves as radioactivity, a new term in science. They began to attempt to isolate the elements from the compounds they had previously studied. This was difficult given radioactive elements decay. In 1903, Curie submitted her doctoral thesis addressing radioactivity, entitled Research on Radioactive Substances. She presented the basis of radioactivity and its connection to the structure of atoms. Despite her expertise in the subject, conferences requested her husband as a speaker while she was not invited to address the almost entirely male audience. 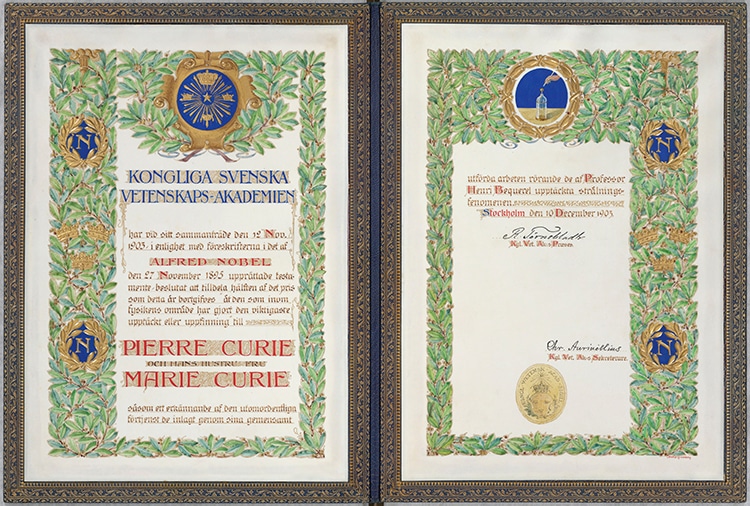 The Nobel Prize in Physics diploma awarded to Pierre and Marie Curie in 1903, which was shared with. Henri Becquerel. (Photo: , Public domain)

In 1903, the same year Marie defended her thesis, the Curies’ work caught the attention of the Nobel Prize Committee. Together with Becquerel, the three scientists were awarded the Physics prize for “their joint researches on the radiation phenomena discovered by Professor Henri Becquerel.” Marie almost did not receive the award despite her work being arguably the most critical discoveries. Upon hearing that his wife and research partner was not listed for the award, Pierre complained to the committee. Her inclusion was not only right, but a monumental step for female scientists.

In 1906, after the birth of their second child, Pierre was killed in a freak traffic accident in Paris. The University of Paris offered a teaching post promised him to his widow. Devastated at the end of what (by all accounts) seems to have been a true love match with her intellectual soulmate, Curie nonetheless became the first female professor in the almost-800-year history of the university. She became quite distinguished within a decade, with a lab dedicated to the study of radium as a joint endeavor in 1914 between the University of Paris and the Pasteur Institute. 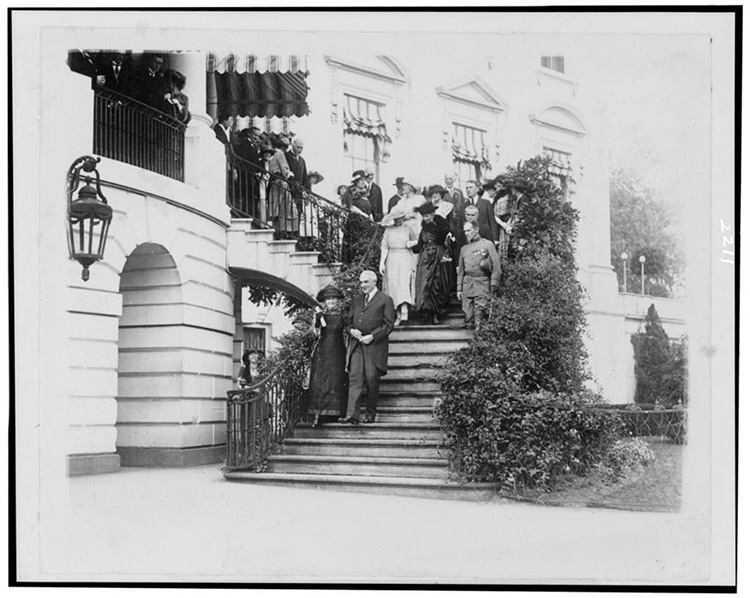 Marie Curie with American President Warren G. Harding on the south lawn of the White House between 1921 and 1923. (Photo: )

In 1911, Curie was awarded her second Nobel Prize—this time solo and in Chemistry. The award cited her isolation of the element radium, which she and Pierre had previously discovered. That same year, she attended the first Solvay Conference. This elite gathering of the best minds in the world included Albert Einstein, Max Planck, and Henri Poincaré. Curie was the only woman in attendance, but the entire theme of the conference built upon her work. The attendees discussed “Radiation and the Quanta” from a physics angle. Despite this recognition, Curie returned to a scandal in France. A short affair with a married, but separated, peer scientist proved the vulnerability of her position as a leading female academic. The press coverage was xenophobic as well as sexist. 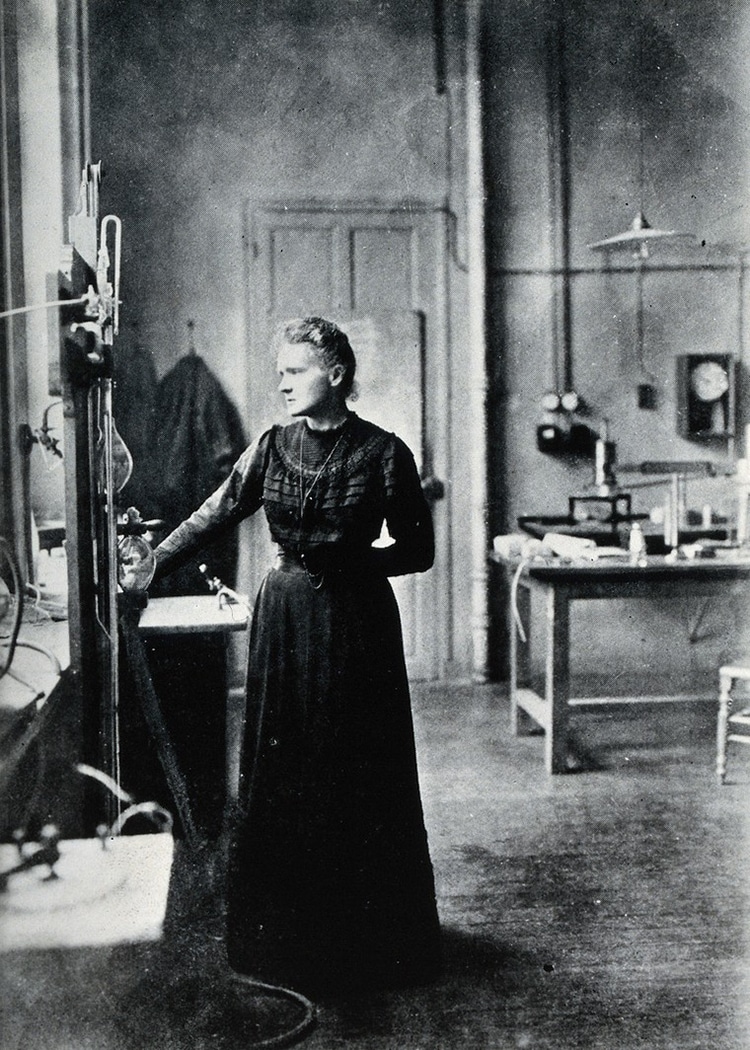 At her Radium Institute, Curie had been researching the medical applications of her work. Before even receiving her PhD, Curie and her husband had published the effects of radium on cancer cells. With the commencement of the Great War, Curie poured her prize money into war bonds and developed field radiology equipment. Working with her daughter, she trained and directed Red Cross nurses. Her radiology operations treated (and likely saved) untold numbers of soldiers. Her post-war profile—and prolific uses of radium—even earned her a visit to the White House to meet President Warren G. harding. He presented her with a gram of radium (a large amount) to continue her work. 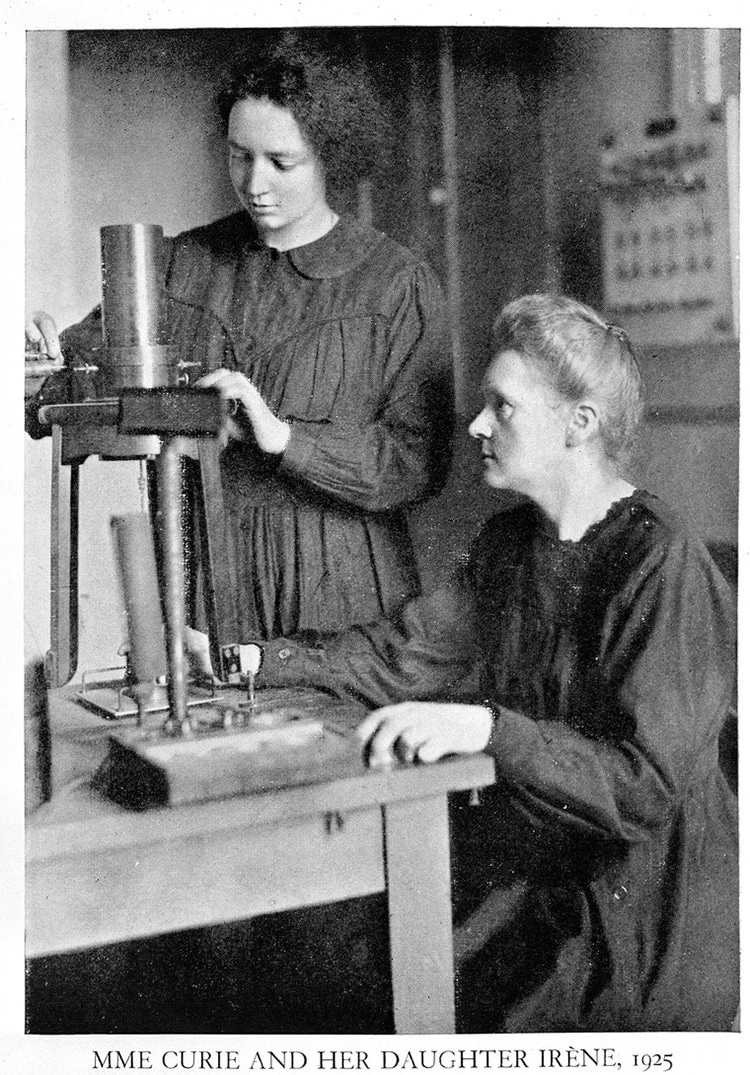 In large part, Curie built her own legacy during her lifetime. The Radium Institute is now the , a leader in oncology research. During her lifetime, a Parisian street was given her husband’s name, and a radioactivity unit of measure was named the curie. In 1935, her son-in-law and her daughter Irène received the Nobel Prize in Chemistry for their continuation of her research. Curie passed away the year before, having taken a huge health toll from years of unwitting exposure to extremely radioactive material.

Since her death, Marie Curie has been the namesake of hospitals, museums, and universities dedicated to continuing her brilliant discoveries. An element on the Periodic Table is known as in her and Pierre’s honor. The two Curies are buried in the 18th-century in Paris—in lead-lined coffins. Even their papers are housed in lead due to the lingering effects of radiation. Curie dedicated her life to science, and in a relatively short career managed to discover the basis of a cancer treatment that today is still the best medicine available. A source of pride to both Poland and France, Curie laid the foundations for generations of women and young scientists. 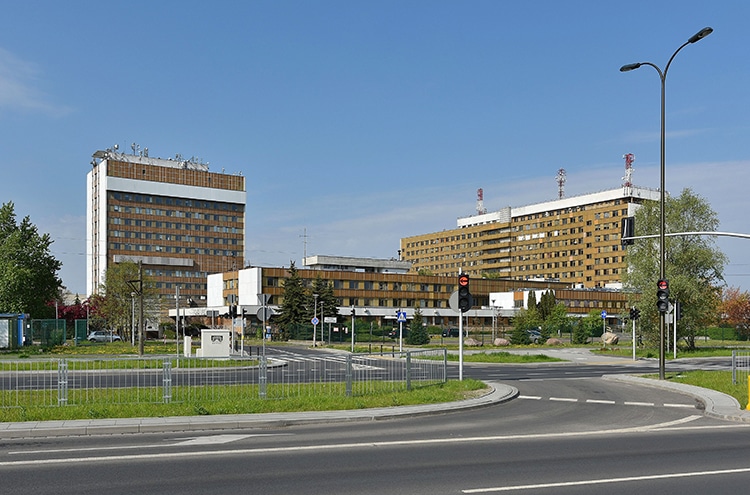