Why L’Arc de Triomphe, Wrapped is the most important artistic statement of the 2020s 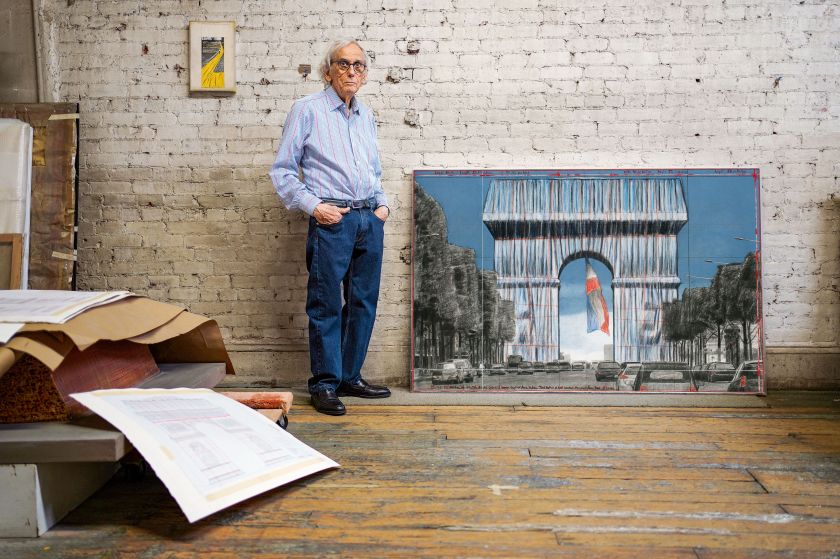 Wrapping the Arc de Triomphe in fabric might sound like a frivolous stunt. But this project, which has been in the making for over half a century, is anything but. In fact, we’d argue it’s the most important artistic statement of the decade so far.

We’ll explain why in a moment. First, though, some historical context.

The Arc de Triomphe de l’Étoile (literally, ‘The Triumphal Arch of the Star’) is one of the most famous monuments in Paris, honouring those who fought and died for France in the French Revolutionary and Napoleonic Wars. It was long the dream of Christo Vladimirov Javacheff and Jeanne-Claude Denat de Guillebon, the married artist couple better known as Christo and Jeanne-Claude, to wrap it in fabric.

The couple first drew up plans to do so in 1962 while renting a small room near the monument and produced a photo collage of how it might look. However, they never seriously proposed the idea, assuming getting permission would be impossible.

They did, however, go on to create several similar large-scale, site-specific installations, most notably The Pont Neuf Wrapped in France (1985) and the Wrapped Reichstag in Germany (1995). Also, the Running Fence (1976), a 24.5-mile fence in California, and The Gates New York (2005), which consisted of 7,503 vinyl ‘gates’ along 23 miles of pathways in Central Park.

Although Jeanne-Claude died in 2009, nine years later, Christo was unexpectedly given permission to carry out his much-longed-for project, the wrapping of the Arc de Triomphe, scheduled for 2020. Covid put paid to that happening on time, and in May last year, Christo himself passed away. But now, his dream is finally about to be fulfilled. 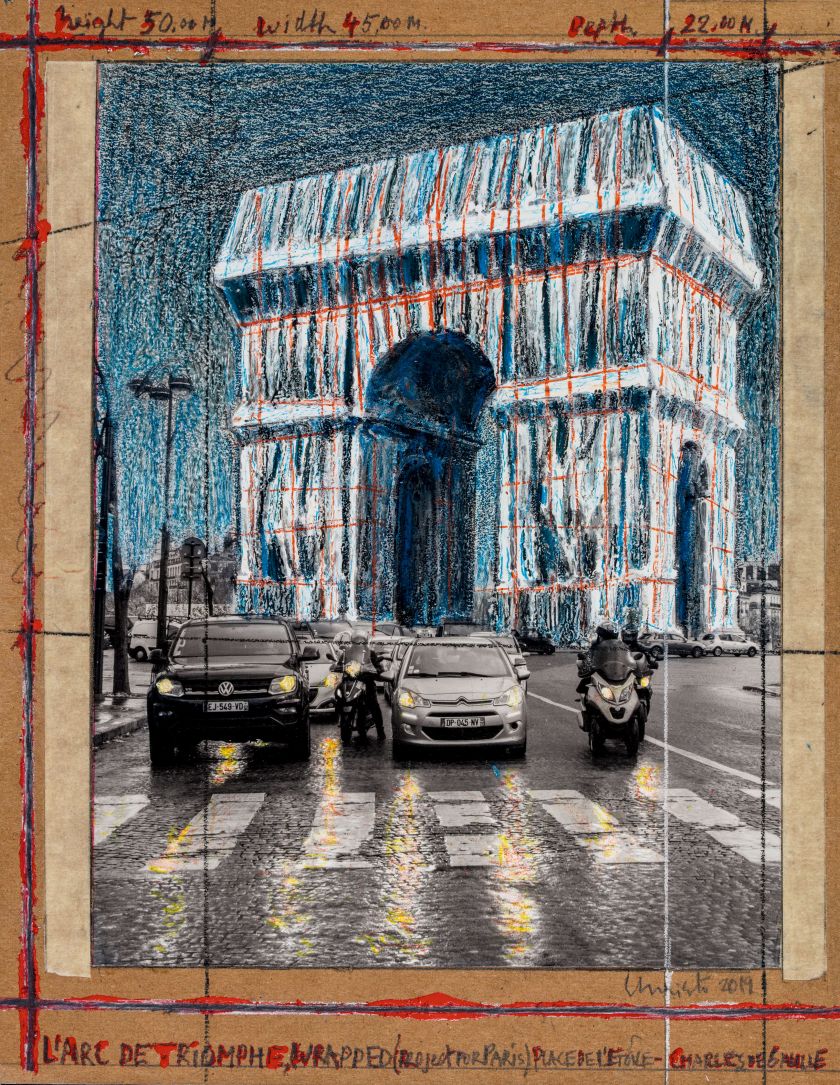 The famous moment is about to be swathed in 25,000 square metres of polypropylene fabric and red rope (both recyclable) for 16 days, beginning on Saturday 18 September and ending on Sunday 3 October 2021. There’ll be an accompanying exhibition at Sotheby’s Paris, entitled , featuring 25 works telling the story of the project.

Typically when public art goes on display, critics cry: ‘What a waste of taxpayer’s money!’ But this time, they won’t be able to, as the whole project has been funded by Christo’s estate, from the sale of preparatory studies, drawings, and collages of the project, as well as scale models, works from the 1950s and 1960s, and original lithographs.

But what does it represent, and why was it envisioned in the first place?

Often with works of art, the public is left to figure that out by themselves. But in this case, we have the artist’s final interview given to , before his death, in which he outlined his reasoning precisely.

An expression of freedom

“Our work of art is a scream of freedom” was the famous rallying cry of Christo and Jeanne-Claude. And in this interview, Christo explained L’Arc de Triomphe, Wrapped, in the following terms. “The work must be seen as the expression of total irrational freedom, free from any justification,” he said. “I decided to do something completely unnecessary, a bit like a painter in his studio with a blank canvas. Nobody asks him why he puts blue, black or red on his canvas. He does it on instinct.” 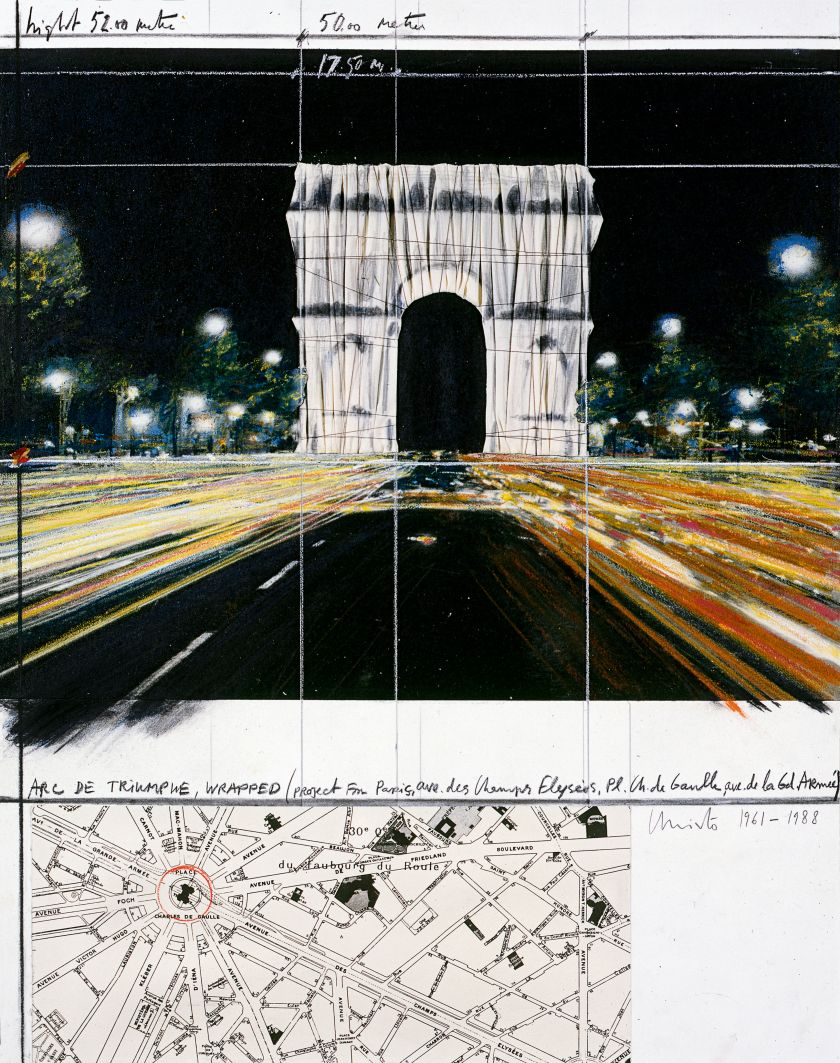 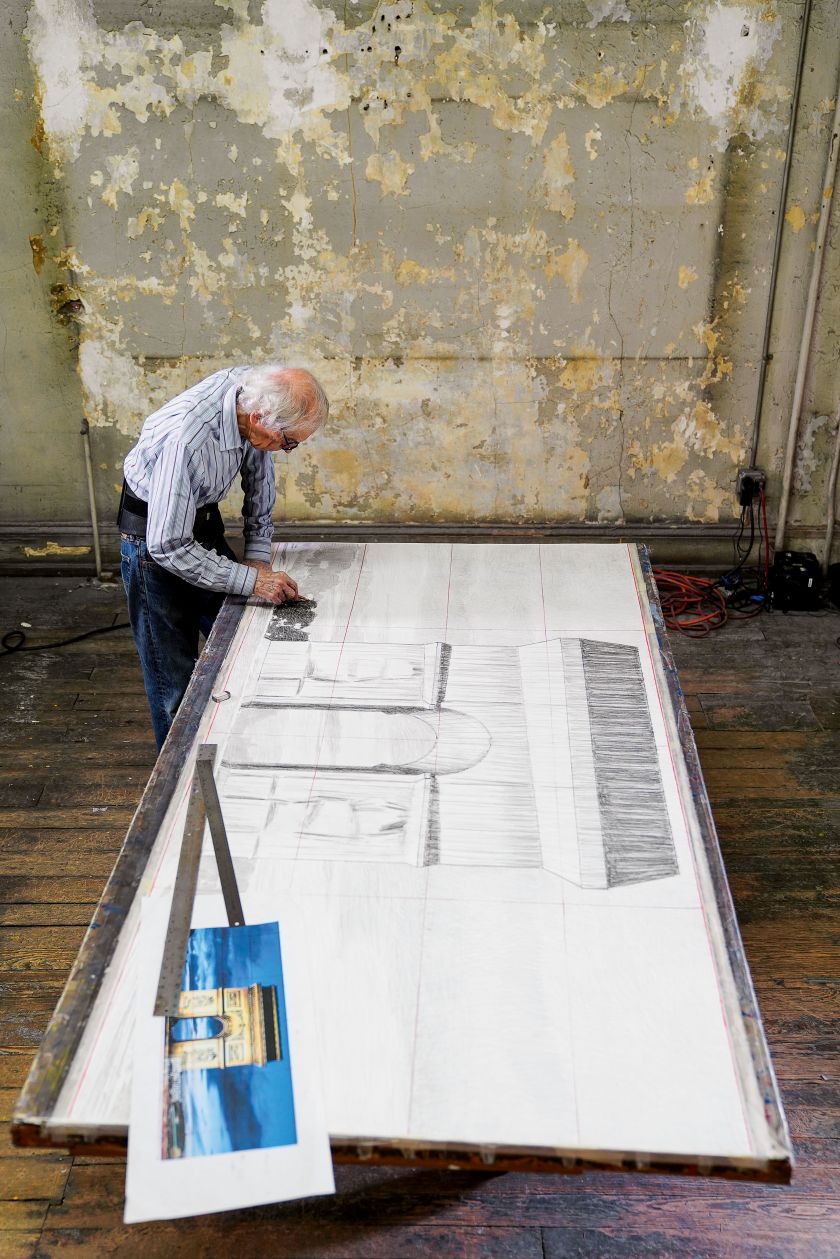 In other words, wrapping a monument in fabric is something that’s completely unnecessary. But rather than being a reason not to do it, it is a very good reason to do it – as a celebration of living in a free society.

Christo knew all about the importance of liberty, having come to Western Europe as an illegal immigrant escaping Bulgaria, where he’d felt “suffocated” by the Soviet regime of the time. “If everything revolves around freedom, it’s because I escaped on my own to make art, quite simply,” he said.

The temporary nature of Christo’s wrapped monument itself reflects this spirit of freedom. “We cannot get permission to leave our works in public space indefinitely, but we build them as if they are going to stay forever,” he told the magazine. “I have always liked the comparison with nomadic tribes. They build their tents, their houses, move in the desert. Their tents are very strong because they have to resist the wind and the forces of nature.”

This mammoth and uncompromising ode to freedom is a timely statement, in an era when many artists are getting their work removed from both social media platforms and physical galleries for being supposedly “offensive”; an experience Claire Luxton, for one, shared with us in .

Christo’s notion of freedom extending beyond merely “what is necessary” reminds us, too, of the strange debates we had during lockdown over what constituted an “essential purchase”. The sight of supermarket shelves being roped off because they contained such “non-essential” items as tampons, baby clothes, and kitchen utensils made it clear that many in authority believe the most basic rights and freedoms are something to be negotiated, rather than absolute.

As we gradually emerge from lockdown, it’s hoped that these kinds of infringements on our lives and creative freedoms will not become entrenched in our culture but gently melt away like a bad dream. And so it’s heartening that in France, the founding nation of “liberté”, we see one of the biggest tributes to creative freedom erected in the heart of its capital.

It’s worth noting, too, that Christo and Jeanne-Claude, who originally immigrated from Morocco, never saw freedom as just a theoretical concept but something that had to be actively promoted and fought for. That was the impulse behind funding all their large-scale works, to prevent the authorities from controlling the purse strings, and hence the projects. 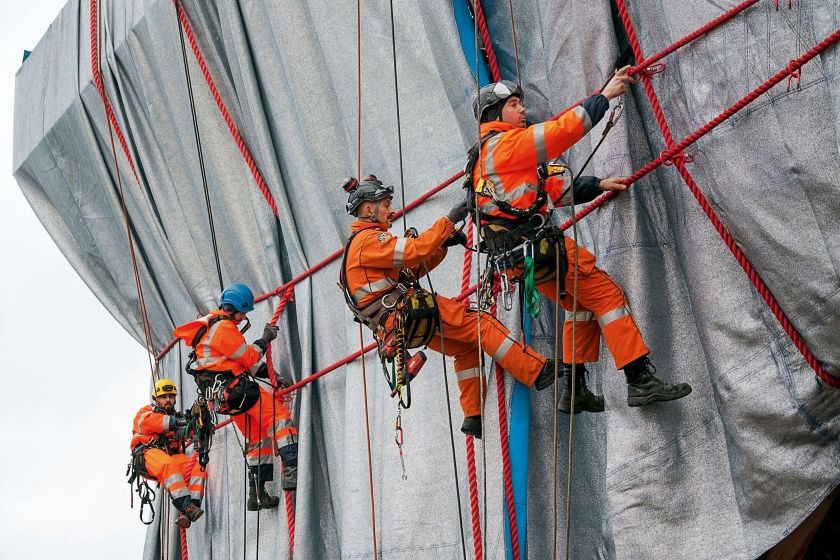 Professional climbers from Compagnie des Guides de Chamonix link the ropes to steel rope connectors, which are attached through “button holes” in the fabric to the steel structure. 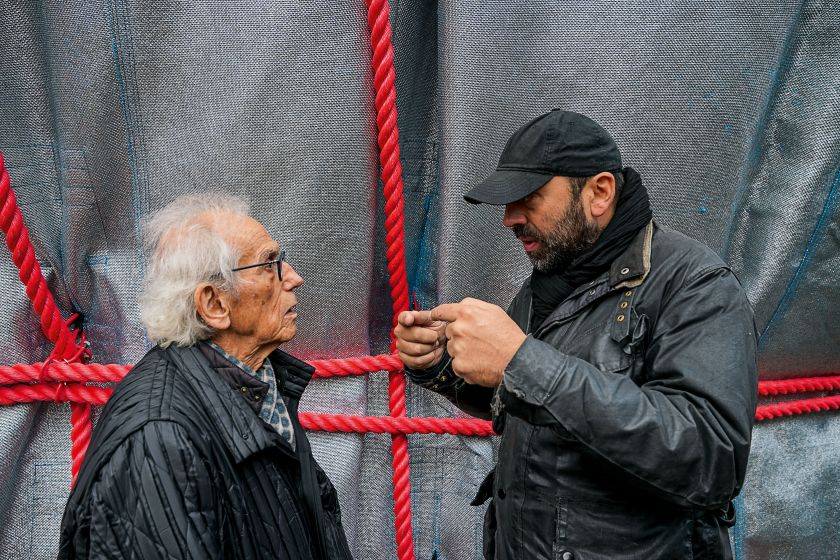 Christo and Vladimir Yavachev discuss the different qualities of the three different-sized ropes that were used in this test. Christo decided upon the middle-sized rope Photo: © Wolfgang Volz

It also lies at the heart of their temporary nature, meaning, as Christo put it: “No one can buy them, no one can own them. No one can sell tickets to see them; no one can market them.” And the pair took this principle to even greater heights.

So, for example, they didn’t just rent the Reichstag when they wrapped it, but also the entire perimeter around the building to make sure that no company could use the space for commercial purposes during the life of the project. For the Gates, meanwhile, they paid New York City $3 million in rent so that no one could come and shoot movies or TV shows in Central Park during that time. (The marathon was allowed, but no commercial enterprise.)

It’s difficult, in short, to think of two artists who were more passionate about making public art truly public. They will be sorely missed, and the wrapping of the Arc de Triomphe this month is a worthy tribute to their drive and their genius.

Sadly, it’s difficult for most of us to visit Paris right now. But thankfully, you can still get to enjoy this milestone event in the art world through the beautifully produced accompanying book by Taschen, .

Published as a tribute to the late artists and their lifelong partnership, the book includes original sketches, technical data, and images by Wolfgang Volz, who has worked with Christo and Jeanne-Claude as the exclusive photographer of their works since 1971.

It all adds up to a fascinating behind-the-scenes look at the genesis of this prodigious artwork. is on sale from 9 September, with versions in English, French and German. 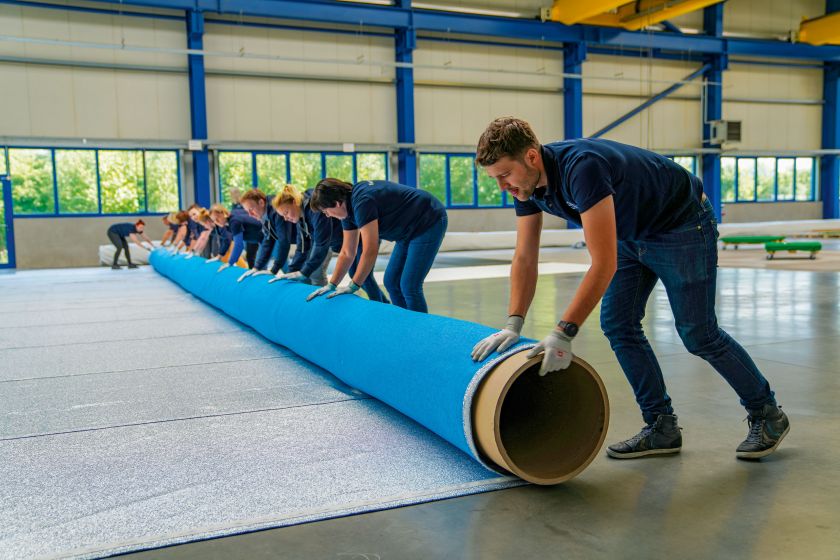 Felix Dickenberger, Ingrid Moller, Mary Timm, Sascha Donitzky, Margareta Eisenreich, Irina Laas, and Lydia Miklucha roll the sewn panels onto tubes. They purposely roll the fabric so that the silvery side is inside and ready to be unfurled on the Arc de Triomphe.The largest panels will be 8 meters (26 feet 4 inches) wide, weighing one metric ton (1.1 ton) each. 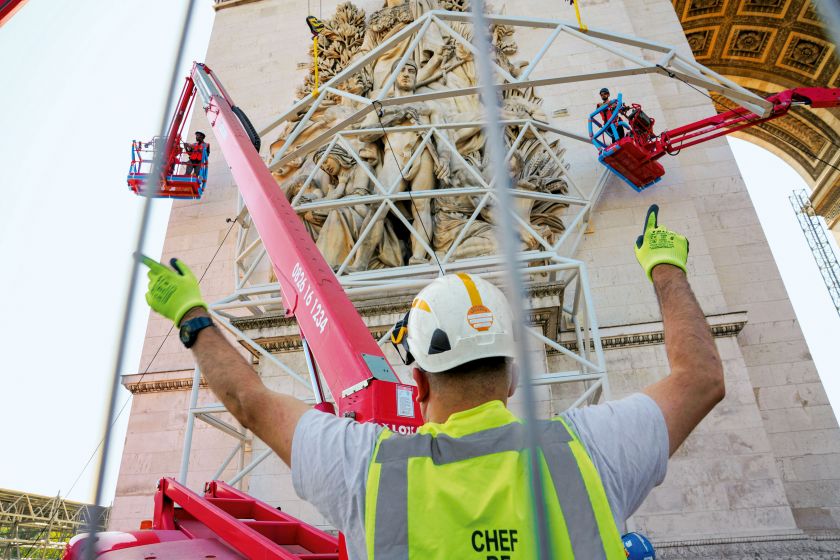 As the steel pieces are lifted into place by crane operators, workers from Les Charpentiers de Paris, using cherry-pickers, fasten them together Photo: © Wolfgang Volz 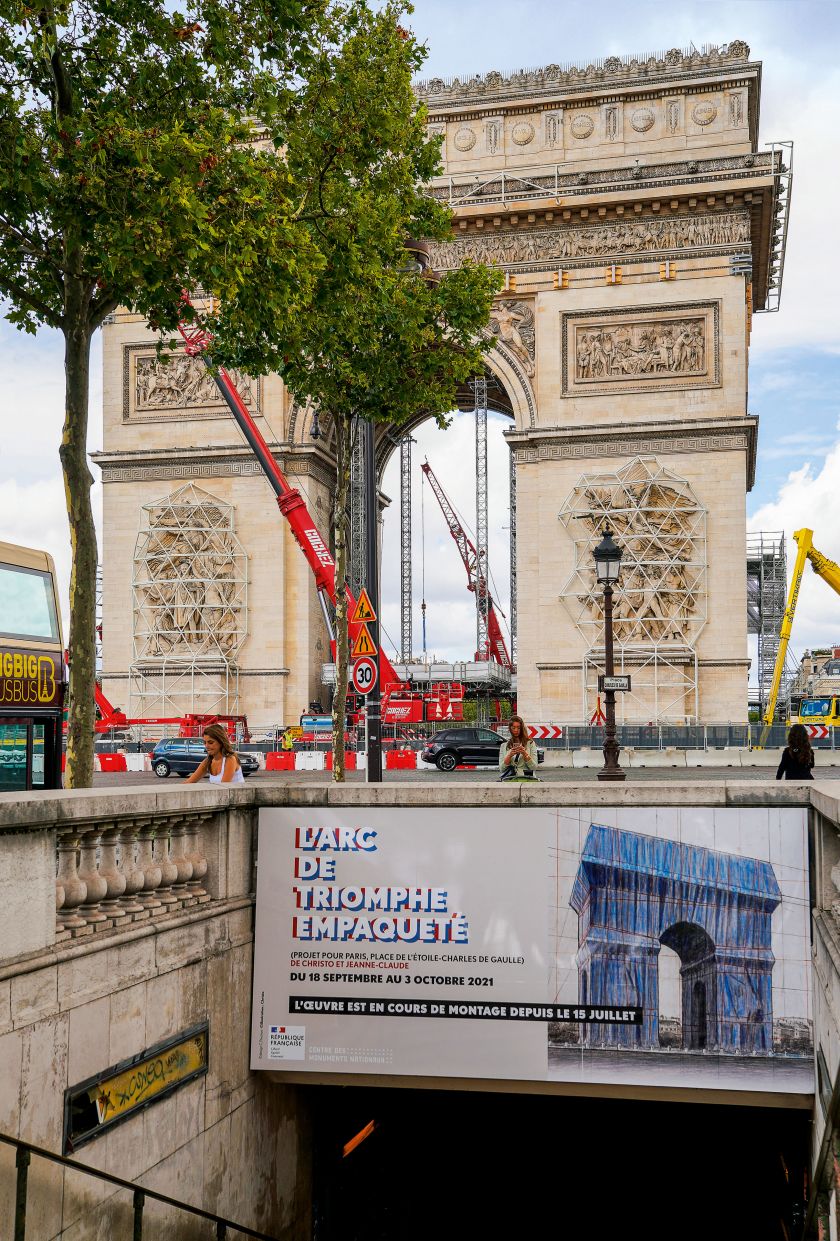 The construction continues in three eight-hour shifts around the clock Photo: © Wolfgang Volz