10 best music docs on Prime Video, for when you need to let your hair down 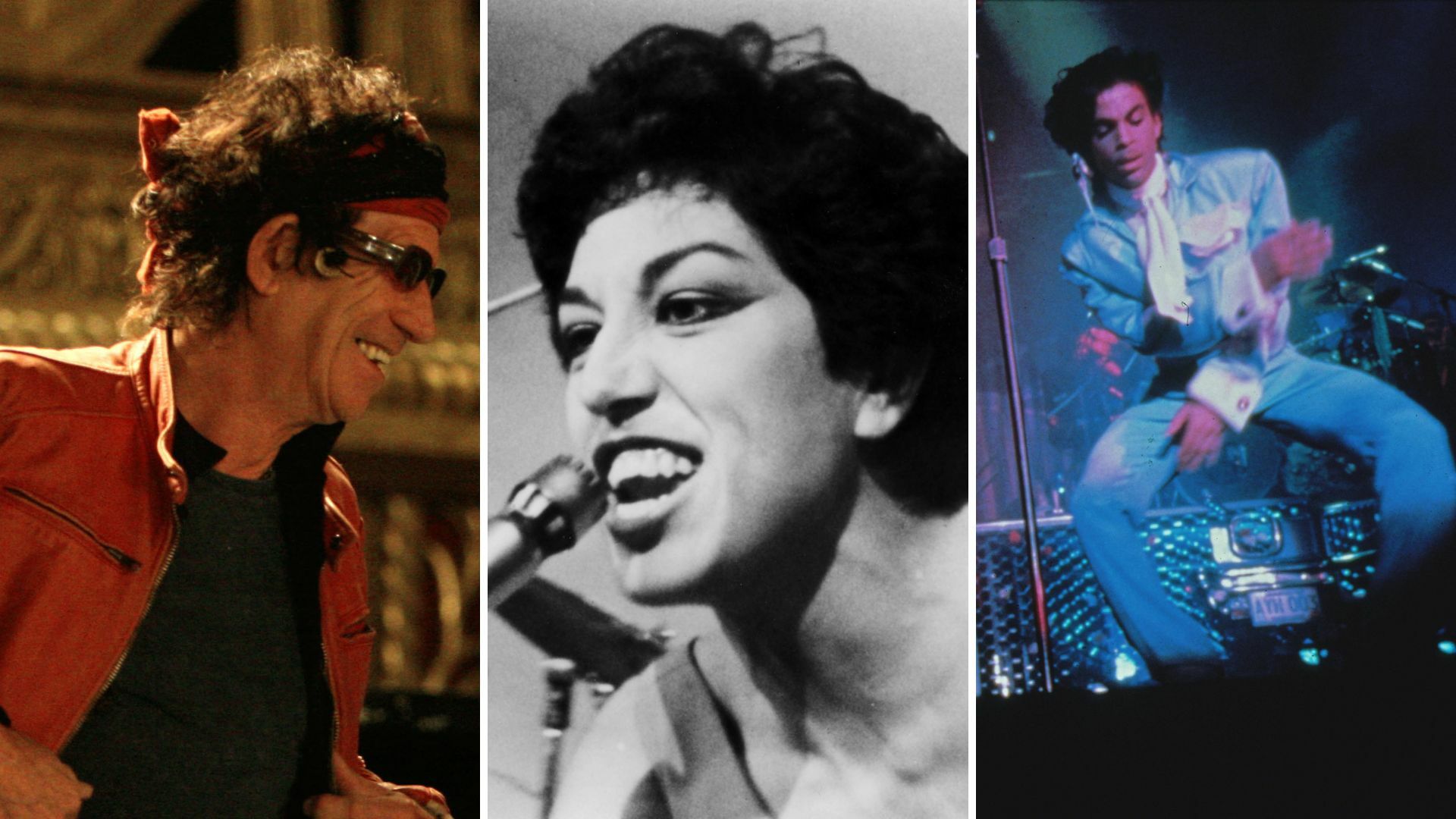 There are as many reasons to make a music documentary as there are ways to sing a song. Maybe the director is a fan of a performer and feels they’ve gone undervalued. Maybe there’s a singular performance that cameras have captured that needs to be entered into the historical record. Maybe somebody died too young, or maybe somebody fell in or out of love, or maybe somebody bit the head off a bat. Again. Who’s to say? If “writing about music is like dancing about architecture,” making a film about music is Frank Lloyd Wright dancing en pointe.

Music, ever intangible, is made a little less so by these movies. It’s a subject that will fascinate forever and in infinite ways, and over the years, many talented directors have done their best to try and capture the impossible for the sake of posterity. 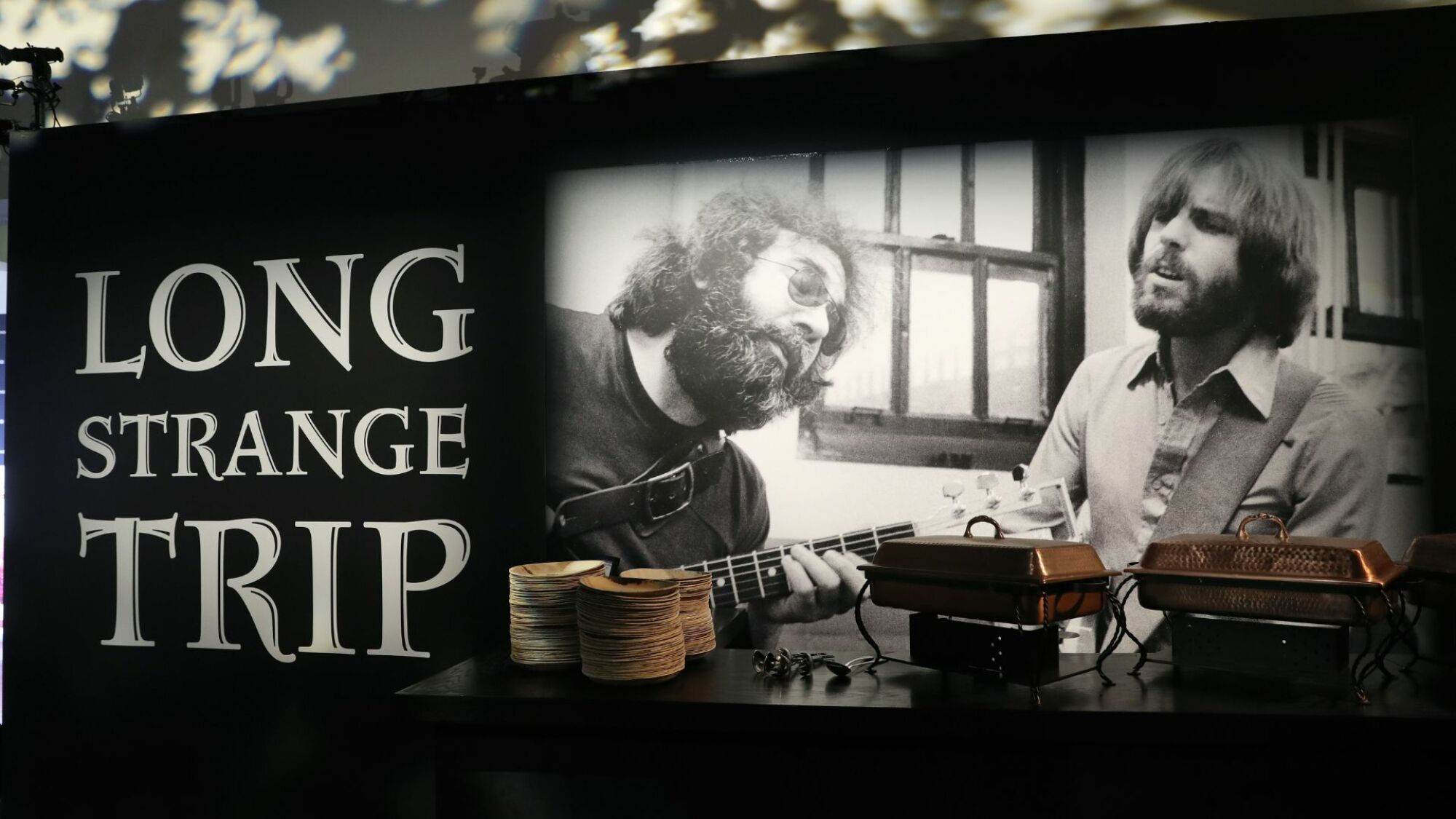 Executive produced by Martin Scorsese, Amir Bar-Lev’s 2017 documentary on the Grateful Dead clearly took its cues from the infamously long-running traveling jam band it set out to document, with a final runtime of nearly four hours. After premiering in its entirety at Sundance and doing a brief stint in theaters, the documentary was scooped up by Amazon and split into six episodes so you can enjoy this Trip in smaller doses in the privacy of your own home. Filmed nearly twenty years after Jerry Garcia’s passing, the legendary hobbit-like front man is by death’s necessity only seen here via archival footage, but the rest of the psychedelic gang shows up in new interviews to jam and jam on, man.

Richard Lowenstein directed nearly twenty music videos for Michael Hutchence’s band INXS before the lead singer’s untimely death in 1997, and presumably because of that long-standing relationship, Mystify feels at times incredibly intimate, sometimes overwhelmingly so. Lowenstein had initially hoped to make a biopic about the singer, but he couldn’t find anyone he thought suitable for the lead role. Instead, Lowenstein dug into his attic full of backstage and on-the-road footage that he’d accumulated of the band over the years. Mystify makes you feel that closeness throughout, even as the question of Hutchence’s death looms large. The intimacy comes across in the interviews that Lowenstein conducted over the course of a decade with INXS’s remaining band members and even more notably with Hutchence’s girlfriends, especially singer Kylie Minogue, who shares some remarkable personal footage from their romance.

3. The Decline of Western Civilization 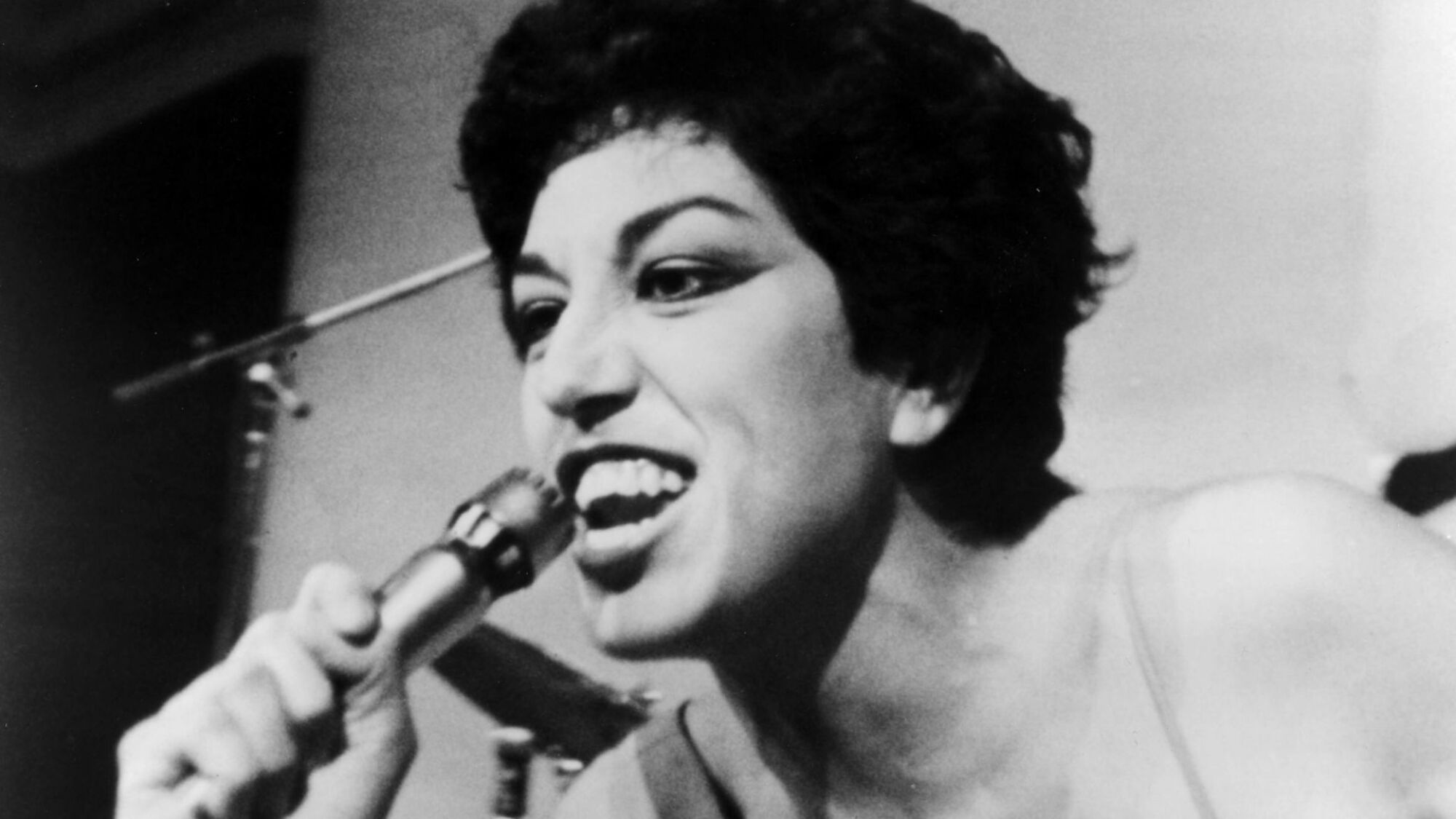 Alice Bag as seen in “The Decline of Western Civilization.”
Credit: Spheeris Inc/Kobal/Shutterstock

Penelope Spheeris (Suburbia, Wayne’s World) directs this truly legendary document of Los Angeles’s punk rock scene at the tail end of the 1970s, featuring performances by Black Flag, X, Alice Bag Band, the Circle Jerks, and Germs so visceral your skin might break out in hives, alongside truly unforgettable interviews with the sweaty, sneering audiences all sticking safety-pins through places you don’t wanna know. (Germs lead singer Darby Crash was photographed for the poster shortly before killing himself.) This film is the first of a trilogy, followed by 1988’s hairspray-heavy The Decline of Western Civilization Part II:The Metal Years (also available free on Prime) and 1998’s Part III (available to rent on Prime), which focuses on homeless street punks. For my money, the first Decline is where it’s truly at — when the film premiered in July of 1981, the chief of police wrote a letter demanding the film never be screened in L.A. again, and what’s more punk rock than that? 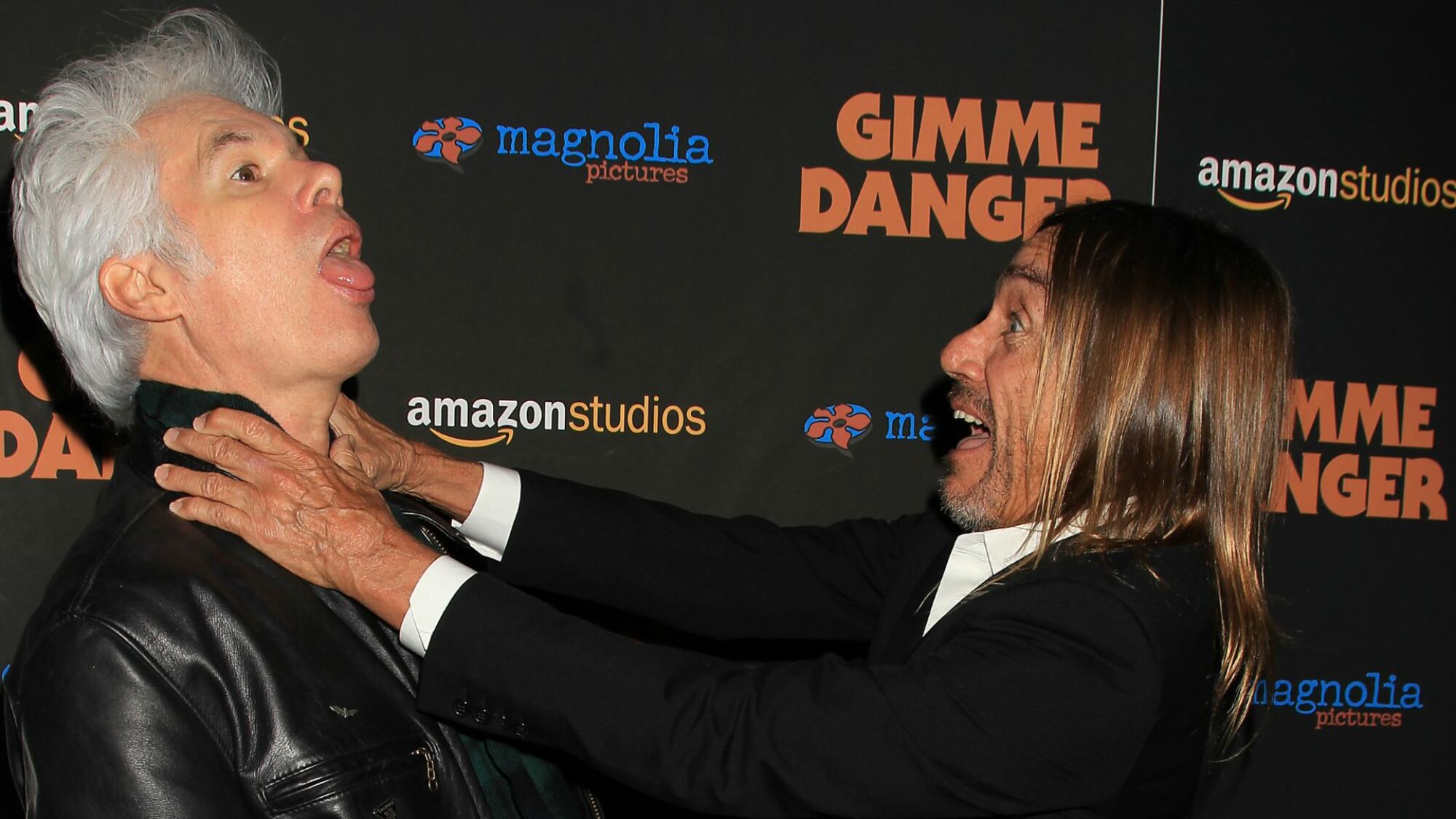 Indie darling Jim Jarmusch’s entire oeuvre drips with a scummy, rock-show ashtray aesthetic, whether he’s shooting Tilda Swinton in a ratty vampire wig wandering the streets of Detroit in Only Lovers Left Alive or Iggy Pop doing pretty much the same in real life. Gimme Danger, the story of the Stooges, is Jarmusch’s second music documentary, and there isn’t anyone better suited to the gig than the magnificently coiffed East Villager. Formally straightforward in a way that’s a little surprising coming from Jarmusch, the film has the friendly feel of somebody working overtime to preach the gospel about a thing they adore. Luckily, Jarmusch never exhausts its subject (or viewers) like did; like the succinct songs that the Stooges penned, Gimme Danger is in and out before you even notice, leaving you satisfactorily dazed in its wake.

Even if this documentary’s only claim to fame was that it includes footage of Nirvana’s very first performance of “Smells Like Teen Spirit” at the OK Hotel in Seattle in April of 1991, that would still be pretty damn impressive. As it stands, Doug Pray’s 1996 doc looking back on the pan-flash popularity of the grunge scene and the way it changed an entire city reads today like the Rosetta Stone of Gen X texts, with all of its talking heads – including several adorable pre-teen tykes who go on about “The Man!” – encapsulating that moment’s precise vibe of natty thrift-store clothes and the anti-capitalist leanings behind them. It also features a whole bevy of performances by flannel-clad acts near and dear to X’er hearts, from Soundgarden and Pearl Jam to 7 Year Bitch, Mudhoney, the Melvins, and the Gits. So dig out your favorite piece and rock out! 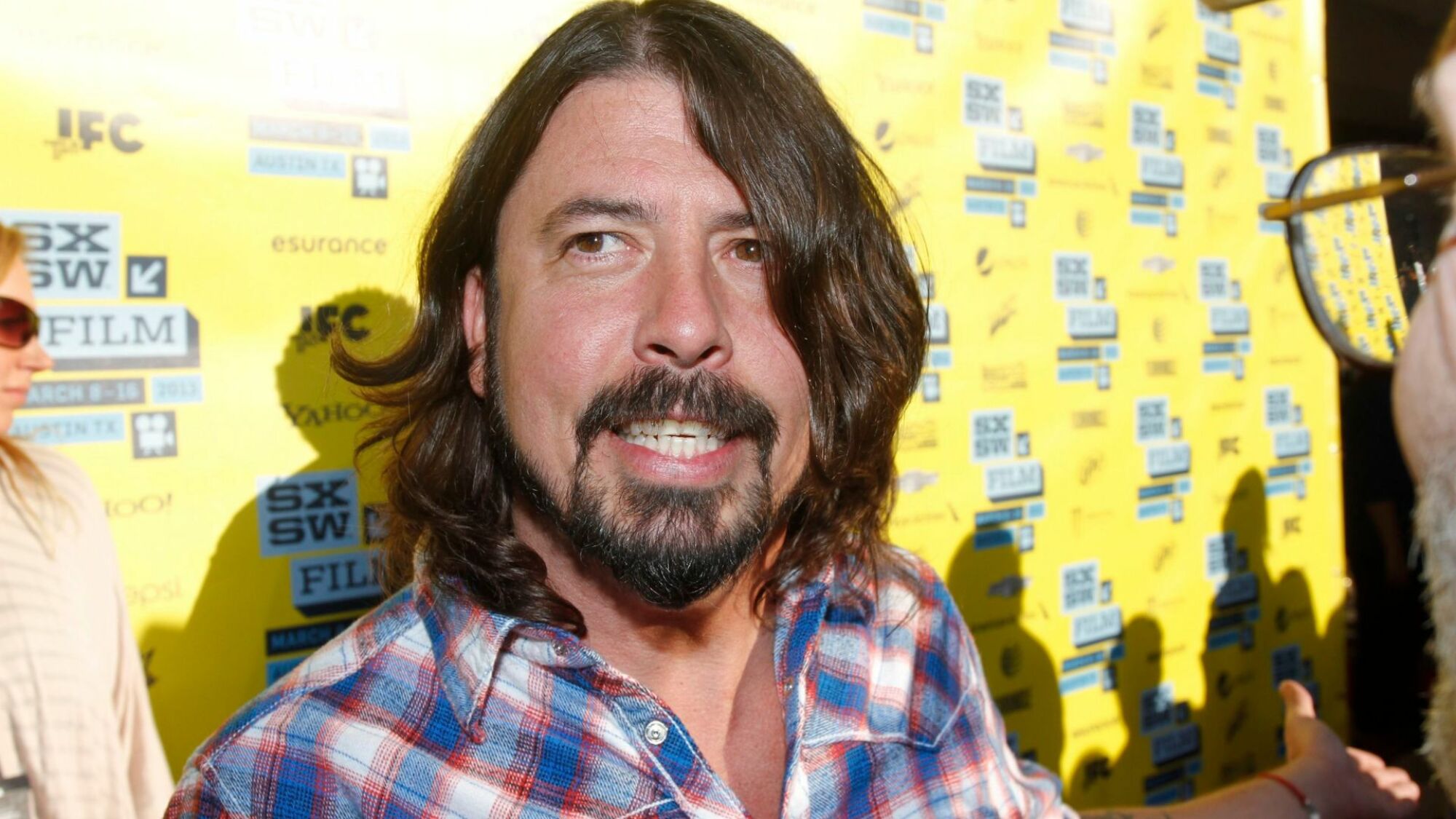 Dave Grohl arrives at a screening of his movie “Sound City” during the SXSW Film and Music Festival, on in Austin, Texas SXSW 2013
Credit: Jack Plunkett/Invision/AP/Shutterstock

Many of the best music docs catch their directors nerding out on a thing that they nerdily love and that they nerdily want to share with the world. The nerdiest of them all might just be Sound City, the 2013 feature-length directorial debut from Dave Grohl, wherein the Foo Fighters’ frontman gives us a 107-minute ode to the walls, floors, and corner toilets of a Van Nuys, California, recording studio, and the gargantuan console contained therein that shaped four decades’ worth of music. Integral to the sound of everybody from Fleetwood Mac (whose story of the band forming there by accident is a sweet alternative to the usual stories of their later self-destruction) to Black Sabbath and, yes, Nirvana themselves, Sound City Studios was an unknown icon in need of proper historical establishment and appreciation. This doc is a music nerd’s dream, and Grohl manages to rope in some impressive names for interviews. Just wait til you see who pops up in the last act. 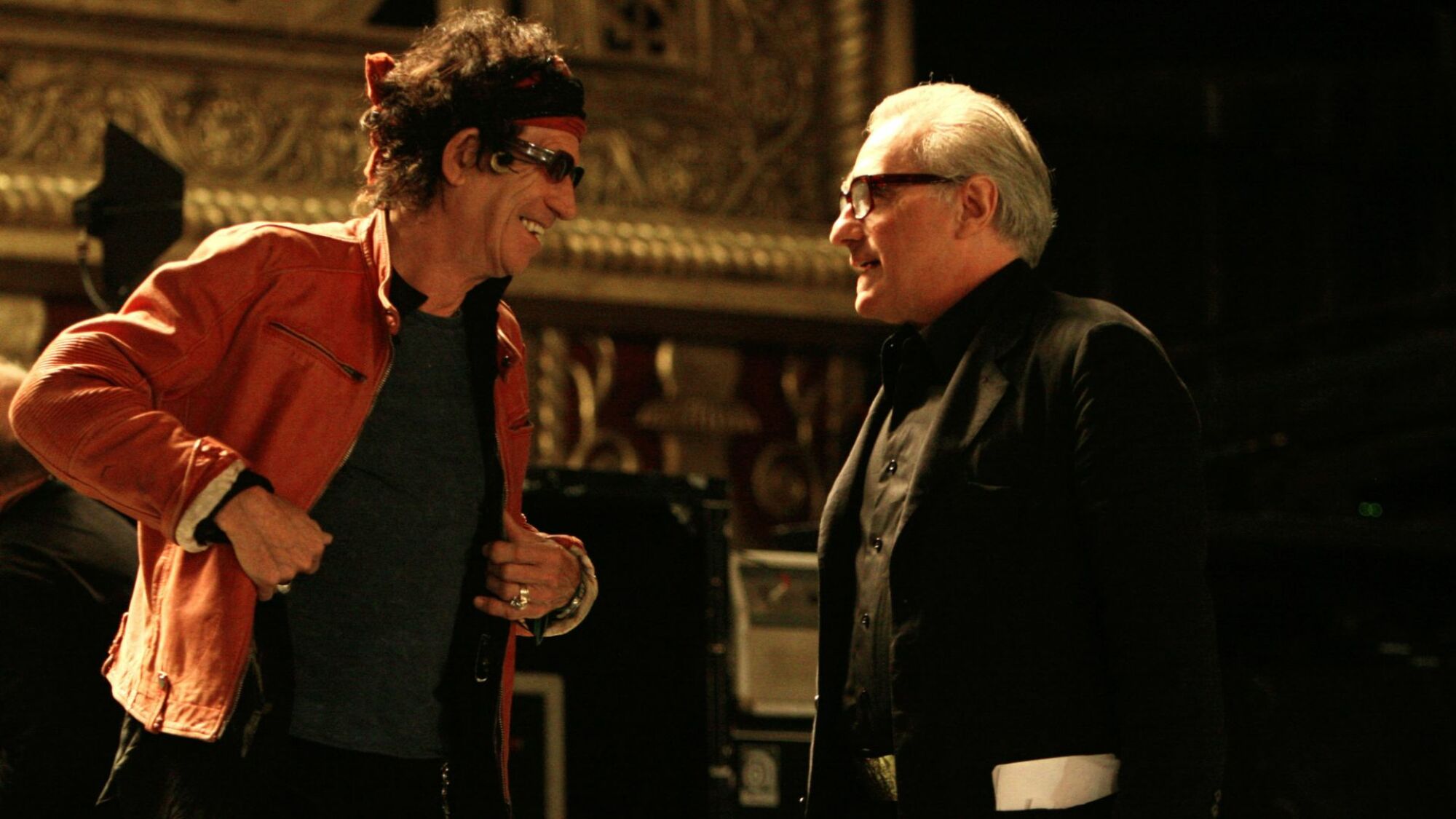 Okay, so it’s no Gimme Shelter, but what is? This is the other notable documentary all about an obscure band called the Rolling Stones, and since Shine a Light was made almost 40 years after the Maysles brothers captured bloody lightening in a bottle at Altamont, it’s documenting the band at quite a different point in their careers. These rock gods are a little long in the tooth by now; the Stones performing in 2006 isn’t exactly the Stones performing in 1969, and neither is the audience, ya dig? For example, all of the drugged-out hippies have morphed into Bill and Hillary Clinton. But since it’s Martin Scorsese sympathizing with these devils this time around, Shine a Light gives you the whole vérité rock spectacle, one pouty-lipped chicken dance after another. As Mick Jagger himself joked, this is the only Scorsese movie that doesn’t include the song “Gimme Shelter” in it; we’re in a true fan’s capable hands with Marty.

My main complaint about director Alex Gibney’s 2014 documentary about the so-called “Hardest Working Man in Show Business” is that, at one minute shy of two hours, it’s not nearly long enough, and that it skims by not just several of its important subjects (including Brown’s history of domestic abuse, which only gets a brief mention) but nearly all of them. Then again, some people’s lives are so rich and so meaningful and in so many different contexts that I don’t think know if any length could do, and some entertainers we just wanna watch entertain, and those twain meet and they meet hard in the big-haired and bigger-souled showman who called himself James Brown. Will anything but just standing back and gaping in awe at him tearing down the roof every night he showed up do? I need somebody to throw a blanket over my shoulders and carry me off after just watching him do his thing; I don’t know if I’ll ever understand how he managed to pull off such performances. 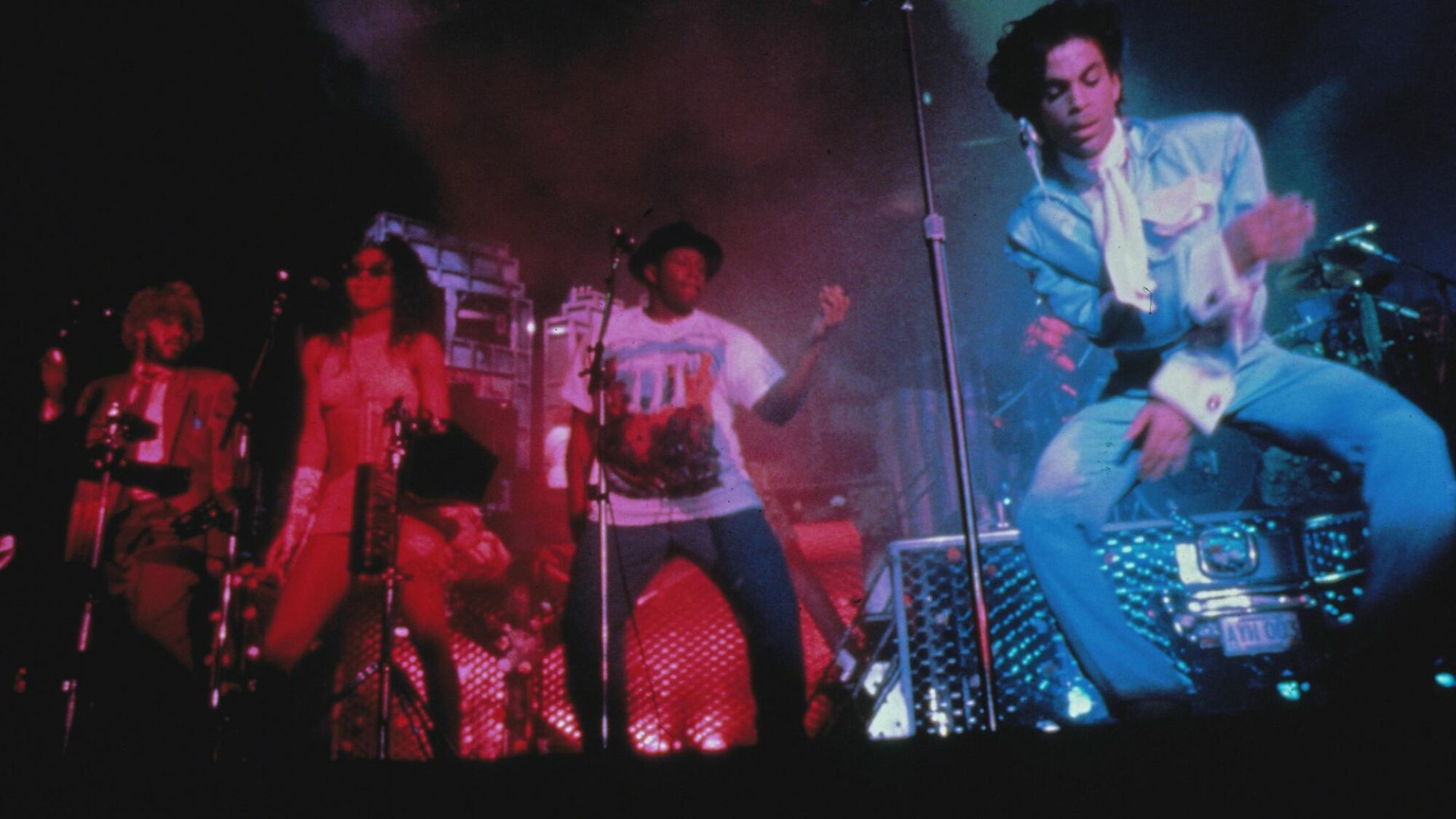 Fringe! Horns! Sheila E. drumming furiously in a one-legged white cat-suit! More fringe! A dude wearing a funeral cloak playing the saxophone! Sunglasses with fringe! If you can dream it, Prince’s 1987 concert tour film showed you can be it, and it can sing it two octaves higher, and it can add fringe to it to boot. Theoretically meant to capture his shows in Europe that year, Prince was unhappy with the majority of the actual tour footage that resulted, so naturally he ended up reshooting 80% of it on the soundstages of his own Paisley Park Studios in Minnesota. That might explain the disconnect between Prince and his music on an ostensible European tour and an audience made up of corn-fed Midwestern sorority girls and fraternity dudes. Even though the film was a notorious flop, it’s still ninety minutes of Prince being a sex-rock-weirdo like only he could be, and as such, it’s a most holy document of purple reigning supreme.

The choice between motherhood and work, or whether or not to even ask the question if there is a choice to be made between motherhood and work, is not the sort of question you expect a rock-and-roll documentary to address, but that’s what makes Michael Gracey’s 2021 film about singer and trapeze enthusiast P!nk such an interesting piece. As she says herself, unlike their male counterparts, most female musicians have to stop touring at some point, when life gets in the way, but P!nk truly seems to have figured out how to balance a shockingly regular home life with the tour lifestyle theatrics we’ve come to expect. Why choose when you really can have it all — a hot motocross champion husband, two adorable kids, and night after night of singing your pop-rock hits while swinging around on aerial silks hundreds of feet above your adoring fans? Gloria Steinem wishes!