Few things are more important in art than understanding your subject.

That’s the great thing about Stray, a new out this week on PC (via Steam) and from French developer BlueTwelve Studio. Stray is a fun and charming little adventure that follows an ordinary orange tabby cat as it tries to navigate (and eventually escape) from a cyberpunk city with a mysterious lack of humans and a quirky robot population. It’s gorgeous to look at, has a funky industrial synth soundtrack, and manages to tell a dystopian story that’s equal parts bleak and hopeful.

That stuff is all fine and good, but it’s secondary to the part where yo this game is about a cat. As a lifelong cat lover who also appreciates a compelling sci-fi narrative, Stray felt tailor-made for my tastes. I’m pleased to report that this game makes the most out of its material by fully grasping what it is that makes these enigmatic creatures so beloved as pets and internet icons. Here’s how. 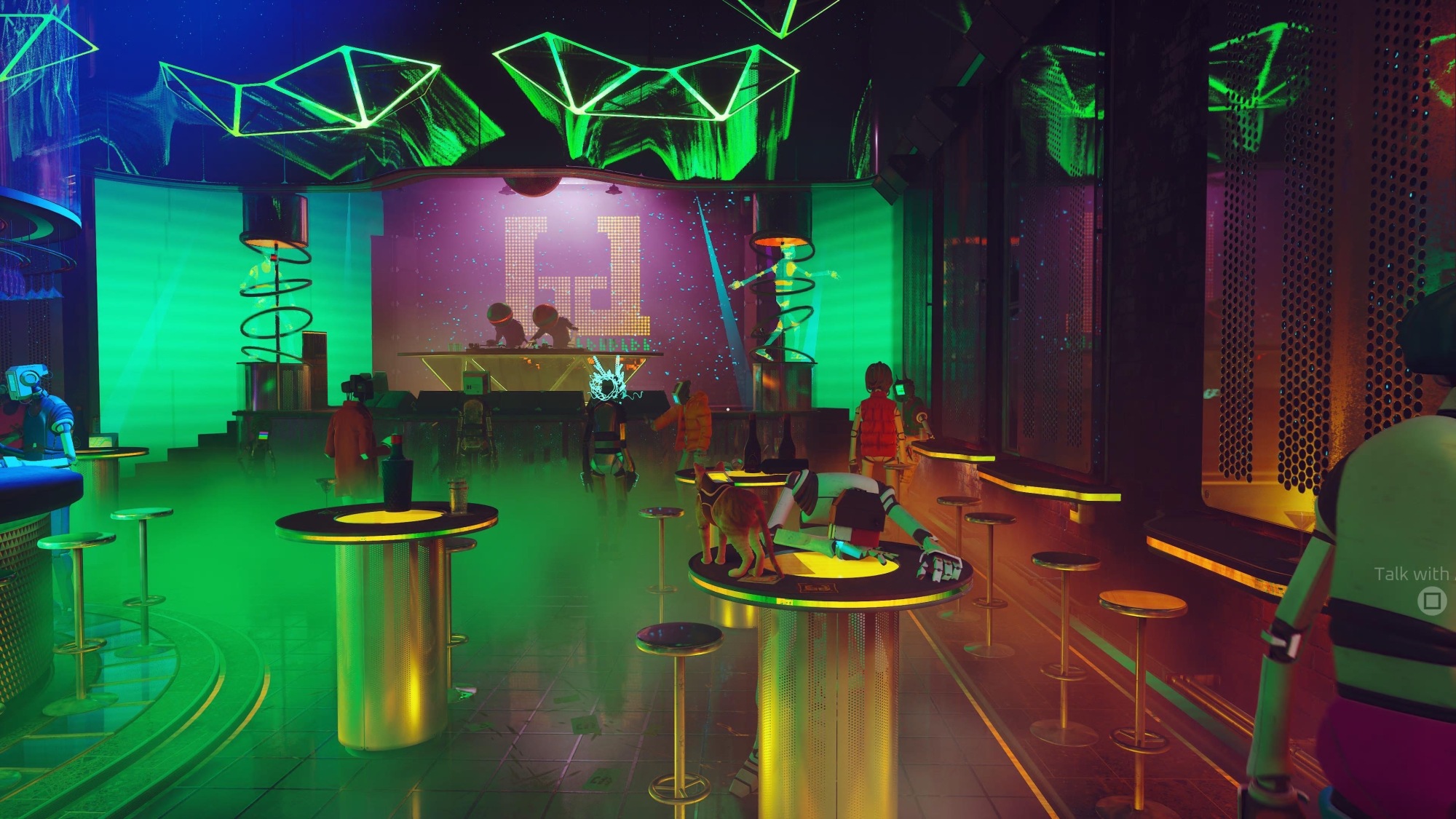 So many things to knock off those tables.
Credit: Annapurna Interactive / BlueTwelve Studio

One thing every owner knows is that the small mountain lion they’ve allowed into their home will invariably, at times, become an amateur physicist. You simply can’t keep any objects on high surfaces like tables and shelves in a house with a cat because the cat will always see to it that those things are relocated to the floor.

This type of gravitational ambition is fully on display in Stray, which occasionally asks its nameless protagonist cat to gently paw at objects until they fall off high surfaces for the sake of solving puzzles. You frequently have to knock photo frames off walls to find hidden codes behind them, or push cans of paint off ledges to distract robots. One puzzle in the second half of the game even has you jump up to a high shelf in a bar and push a crate full of bottles down on a sleeping robot to wake him up.

No, I don’t really understand how robots get drunk and fall asleep in bars either, but that’s fine. The point is that Stray makes great use of this trait cats have that’s always funny, except for when it happens to you. You’ll need to force the robot denizens of this city to help you in any way you can.
Credit: Annapurna Interactive / BlueTwelve Studio

Another universal truth about cats is that they hate any door that’s closed and will do anything it takes to let you know that. Cats feel they are entitled to go into any room and will scream or even mutilate the wood on the door if that will make you open it.

So, naturally, Stray has several moments where you have to whip out those claws and go to town on a door until someone responds. This would be silly but not especially memorable if all you had to do was press a button. Thankfully, the developers went above and beyond, making a scratching minigame that entails alternating between the two triggers, which sets off to mildly simulate the act of tearing apart a door.

While this is only required to solve a few puzzles, there are also plenty of trees, rugs, and other elements throughout Stray’s cybercity that you can freely scratch with no purpose, but also no consequence. That’s the good stuff.

Nothing is more urgent than sleep 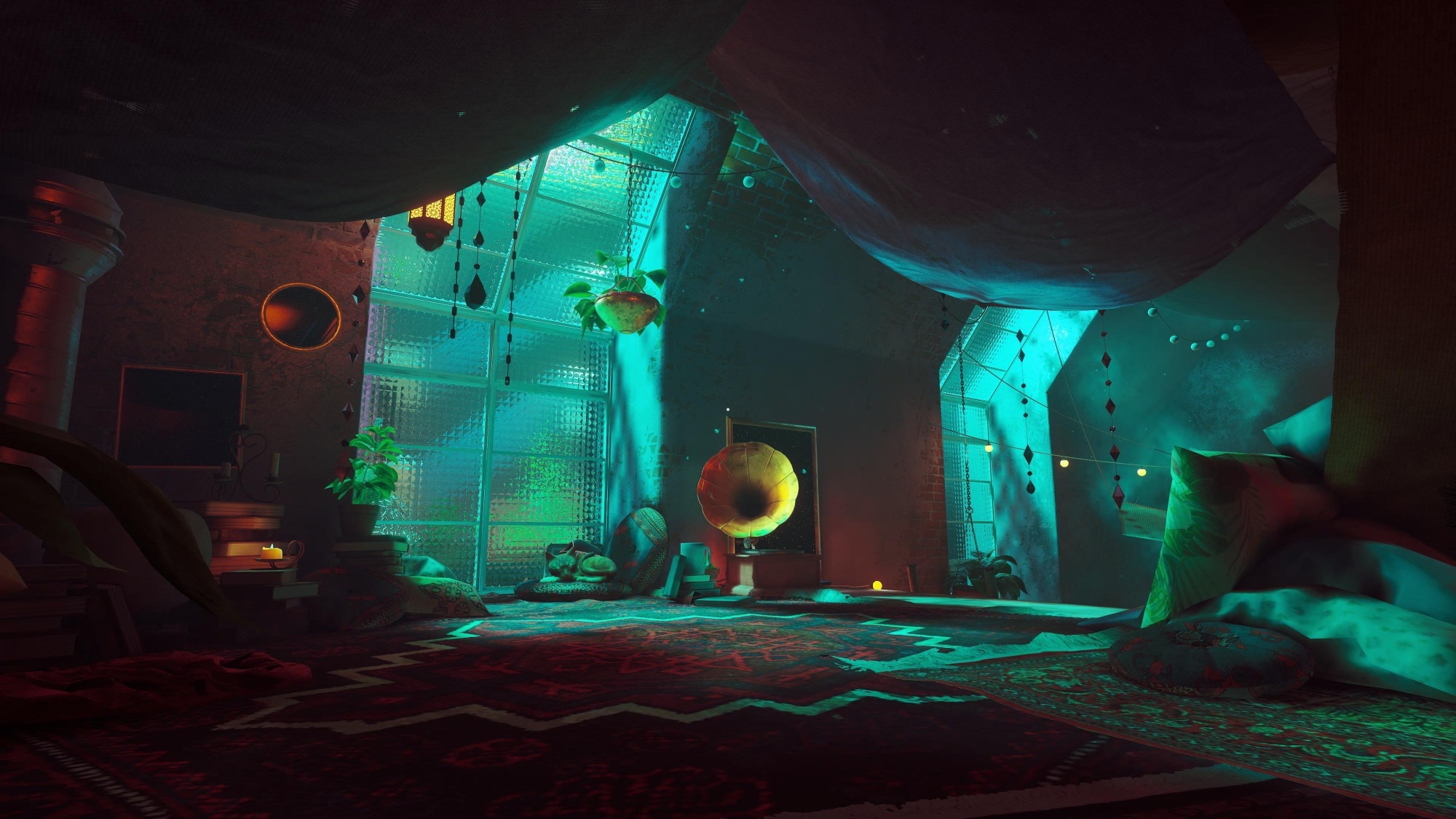 like to sleep. Everyone knows this. It’s kind of their whole “thing.” Any given cat will spend as many as 18 hours a day catching Z’s because they need to store up energy to knock things off shelves, scratch at doors, and generally be weird menaces in the middle of the night. We love them for it.

It’s nice, then, that Stray finds plenty of opportunities for its unlikely hero to rest up, even when the story is too urgent for a nap. If you’re trying to track down a robot rebel who’s taking on an oppressive automated police force, there are way more important things to do than curl up and purr. And yes, purring sets off the controller haptics in the most satisfying way imaginable. As someone who doesn’t currently have a cat, it makes for a fine substitute.

Even if sleeping in these spots serves no real gameplay purpose, it’s nice to nestle between books in a cramped library or adorably snuggle up next to a robot busker for a while, as the camera zooms out to give a pleasant tableau of Stray’s distinctive world. At the very least, it makes for good screenshot material.

Another cat habit that rides the line between annoying and charming is their proclivity for walking across computer keyboards. They’re simply obsessed with doing it, for whatever reason. It often results in you sending some nonsense text strings to a group chat or, horrifyingly, your boss.

And yes, Stray lets you do this during one moment early in the game’s story. You can freely navigate a regular-sized keyboard and watch the text fill up a command prompt on an in-game monitor, which is fun for a few minutes and funny for much longer. The camera actually pulls out a bit to frame the shot so you can see everything this mischievous cat is pumping into its text prompts. The developers knew what they were doing and they did it flawlessly. Cats have lots obsessions that are too strange for humans to understand but funny enough for us to tolerate. One of those is any cat’s fascination with empty cardboard boxes. Leave a box out for longer than a few minutes in a home with a pet cat, and it won’t be empty for very long. Of course, Stray has a couple of simple stealth sequences where you have to stay out of the line of sight of hovering robot sentinels, and in a stroke of feline enthusiast genius, there’s only one sensible place to hide in those circumstances.

Jumping in boxes, Metal Gear Solid-style, is required to progress through some of these moments. But like Stray‘s various sleeping spots and scratching posts, there are also tons of boxes littered around the world that you can hop into for no purpose other than entertainment. Listen, sometimes a cat just has to get into a box for a while.

I don’t want to reduce Stray to nothing but its cat-based pleasures, as it is a very enjoyable game in other ways, too, with a sweet story, endearing characters, and some truly gross art design at times (in the best way). But I’ve loved cats for nearly 30 years and that’s my area of expertise. If you’re in the same boat as me, I can almost guarantee you’ll get a lot out of Stray, too.

‘Fire Emblem Warriors: Three Hopes’ is like going to a rager with friends you haven’t seen in way too long