Let’s face it — is having a moment again, folks. Fashion’s obviously infatuated, seeing as and . Not to mention, with an immensely popular  documentary out and , Gen Z would say the late pop artist is indeed trending right now.

So, what’s next up for the 2022 Warhol reawakening? Warhol’s famous Cars series, his very last commission before his untimely passing, will go on display stateside for the first time in over 30 years starting on July 23.

Shortly after his presentation, the latest Warhol exhibit is set to show at the Petersen Automotive Museum in LA, unveiling Warhol’s renowned artwork series of rides alongside a few IRL vehicles straight from Warhol’s famed collection.

No, seriously, the 1937 W 125, 1970 C 111-II, 1954 W 196, Daimler Motor Carriage, Mylord Coupe, and Type 400 Tourenwagen are amongst the tangible (but, please don’t touch), recherché car models that will be sitting next to their vibrantly illustrated counterparts.

Indeed, the latest installation, titled “Andy Warhol: Cars – Works from the Mercedes-Benz Art Collection,” is enough to satisfy any art lover while also making the most bona fide vintage car enthusiasts shed a tear of joy.

It should come as no surprise that Warhol’s original Car series was commissioned by none other than Mercedes-Benz itself in 1986, considering the series touts nothing but the most precious Mercedes-Benz cars.

The collection, which honored the German luxury vehicle company’s centennial anniversary, was initially meant to include 80 pieces. However, only 49 artworks were created due to the unexpected passing of Warhol in 1987.

Since then, German and Austrian art aficionados have had the pleasure of bestowing their eyes upon the Cars series, as the entire series has only been displayed twice in its lifetime, specifically in those locales.

Now, the “Andy Warhol: Cars – Works from the Mercedes-Benz Art Collection” gives stateside Warholians and automobile fanciers a chance to marvel at the artist’s most notable creation and the next (but certainly not the last) phase in the enduring Warhol renaissance. 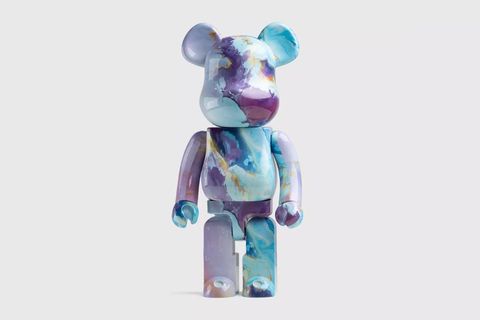