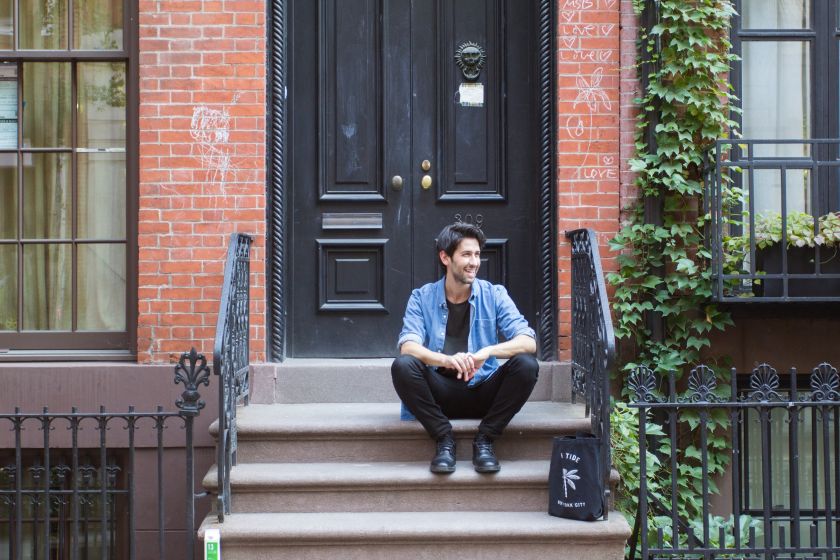 Which books inspire the creative community? And how have different titles helped to shape their careers? These are the questions we hope to find the answers to in our ongoing series, . This time, we’re hearing from Danny Miller, the founder and creative director of , a New York-based creative agency.

Behind new identities and brand refreshes for a broad range of clients from Warby Parker and Nike to Resy and Sweet Chick, Danny Miller has a unique artistic approach to branding and design. He grew up in New York City, surrounded by contemporary art his entire life, which meant he eventually studied Painting & Art History at UCLA before transitioning to the design world. Most notably, his late father was a prolific artist and the subject of Danny’s own book, Nachume Miller: Behind The Painting.

Although the five books Danny has chosen certainly reflect his upbringing in the Big Apple, there’s also a hint of how he instils a sense of art criticism in High Tide and the work it delivers for its clients. In his own words, he shares his final selection with Creative Boom and why each book means something to him.

My father handed me this book when I was an impressionable 13-year-old, and it still stands out as one of the most influential books in my life. The book contains excerpts from Salvador Dali’s personal diary entries from 1952 to 1963. Dali is so singular, lovable and complex and continues to inspire and fascinate me to this day.

A diary is such a personal record, and you get these incredible insights into his private life, the way he thinks, and the various methods behind his madness. He also describes the shape of his own poop in great detail in numerous journal entries, which I found quite hilarious as a teen. I revisited this book during the pandemic, and it became a big inspiration for the visual diary monograph I recently created on my late father, who was an abstract expressionist painter.

2. : The Story of Vincent Van Gogh by Irving Stone

A beautiful biographical novel on the tormented genius that was Van Gogh. Written in 1934 by Irving Stone, the storytelling is pretty faithful and accurate thanks to the lifelong correspondence of letters between Van Gogh and his brother Theo, which helped Stone piece together narratives of Van Gogh’s life in great detail. It remains one of the most inspiring and humbling books because it reminds me how much one person can do with so little. He would eat stale old black bread for days on end in favour of being able to do what he loved and express himself through his art.

He cared more about painting than anything else and would put any little money he made into fresh oil paints. He only sold one of his paintings while he was alive. It’s incredibly inspiring to read about someone so selflessly dedicated to his art and craft, and it completely changed my attitude towards how I approach creativity. Don’t be lazy, don’t be so precious, be more like Van Gogh!

This book was written in 2003 before the therapeutic utilisation of psychedelics became more acceptable in Western culture. Along with other books that followed (Michael Pollan’s How to Change Your Mind being one of them), this was deeply influential to my life and heavily informed how I approach my day-to-day personally and creatively. Psychedelics are a powerful tool for exploring the depths of one’s own psyche and have allowed me to live a more examined life and engage more deeply with the present moment.

The author delves into the history of the psychedelic experience across various cultures and touches on great thinkers from Antonin Artaud to Terrence Mckenna. He also accounts for his own experiences, all searching for the power and deeper meaning behind the psychedelic experience. The book’s title is a fitting one – a phrase taken from the West African Bwiti tribe who use iboga in ceremonial practices. To ‘break open the head’ means ‘to temporarily release the soul from the body, allowing the initial entry into the spiritual cosmos, where he is shown the outline of his fate’.

I’ve always loved album cover art: from when I was a little kid checking out my parent’s record collection, to feverishly collecting CDs, cassette tapes, and vinyl records as a teen, to eventually working at Sony Music and Atlantic Records designing album art. A strong record cover can add so much to the overall experience of an album. I’m still very much an avid vinyl collector, and this book contains a well-curated collection of funk, soul, and jazz record covers, mainly from the ’60s and ’70s, which remains an era that I am continually fascinated with and constantly pull inspiration from. It’s a hefty book – 432 pages – and I love that because you’ll find something new each time you flip through it.

To me, this book is required reading for anybody looking to get a deeper and more comprehensive understanding of branding and design beyond aesthetics. The author, Debbie Millman, conducts interviews with an eclectic mix of people – from anthropologists to branding experts – and each has their own definition of a brand and how it relates to modern society. One interpretation that stuck with me was that brands are totems that tell us stories about our place in culture – where we are, where we’ve been, and where we are going. It’s a very informative book with tons of great insights that have stuck with me to this day. Fun fact: the first brand to create an official trademark was Bass Ale in 1876.