EYTYS’ Santos Is the Laid-Back Sneaker We’ve Been Craving

Visit the to see all 6 images from this gallery.

EYTYS has gone from underground sneaker label, to fully-fledged fashion favorite in the space of just five years.

Based out of Stockholm, the brand – which initially garnered a reputation for creating minimalist, unbranded sneakers in its early days – has gone onto release apparel in the same modest vein, most recently with its thirst-trapping .

Refocusing its attention to footwear for FW22, now returns with a new, laid-back signature sneaker in the form of the low-top Santos silhouette.

Inspired by vintage treasures, more specifically those from 1970s culture, the Santos is a sports-infused sneaker that, in fact, looks like it would be good for anything other than sport – which is never a bad thing, in my opinion.

A premium ensemble of materials and textures elevates the Santos from regular sneaker to sophisticated, resulting in something EYTYS describes as “a premium modernization of classic court-sweeping styles”.

The multi-faceted upper is made from ultra-soft nappa leather, rough suede accents, and shiny satin embroidery, and sits atop a molded rubber cup sole which houses a canvas interior, equipped with arch support.

Set to officially on August 18, 9am (CET), EYTYS’ Santos is a return to normal service for the brand who has been more apparel-focused throughout 2022.

That being said, this is EYTYS’ Tribeca Boots – a minimalist interpretation of the classic chukka boot – which landed earlier this year caught the attention, as did the retro-futuristic Fugu Sneakers, which arrived in a myriad of new colorways.

In such a short space of time EYTYS has established itself in a world where many have failed for decades and, if their most recent releases are anything to go by, they’re probably going to be here for a while, too. 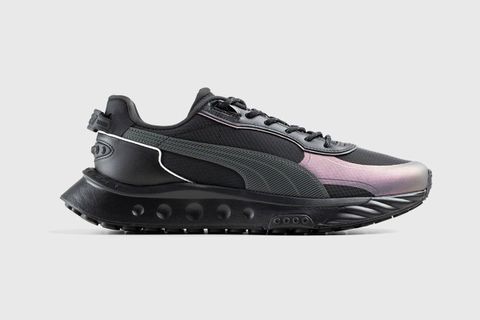