How many cannoli is too many cannoli? At the Feast of San Gennaro, competitors find out the hard way. 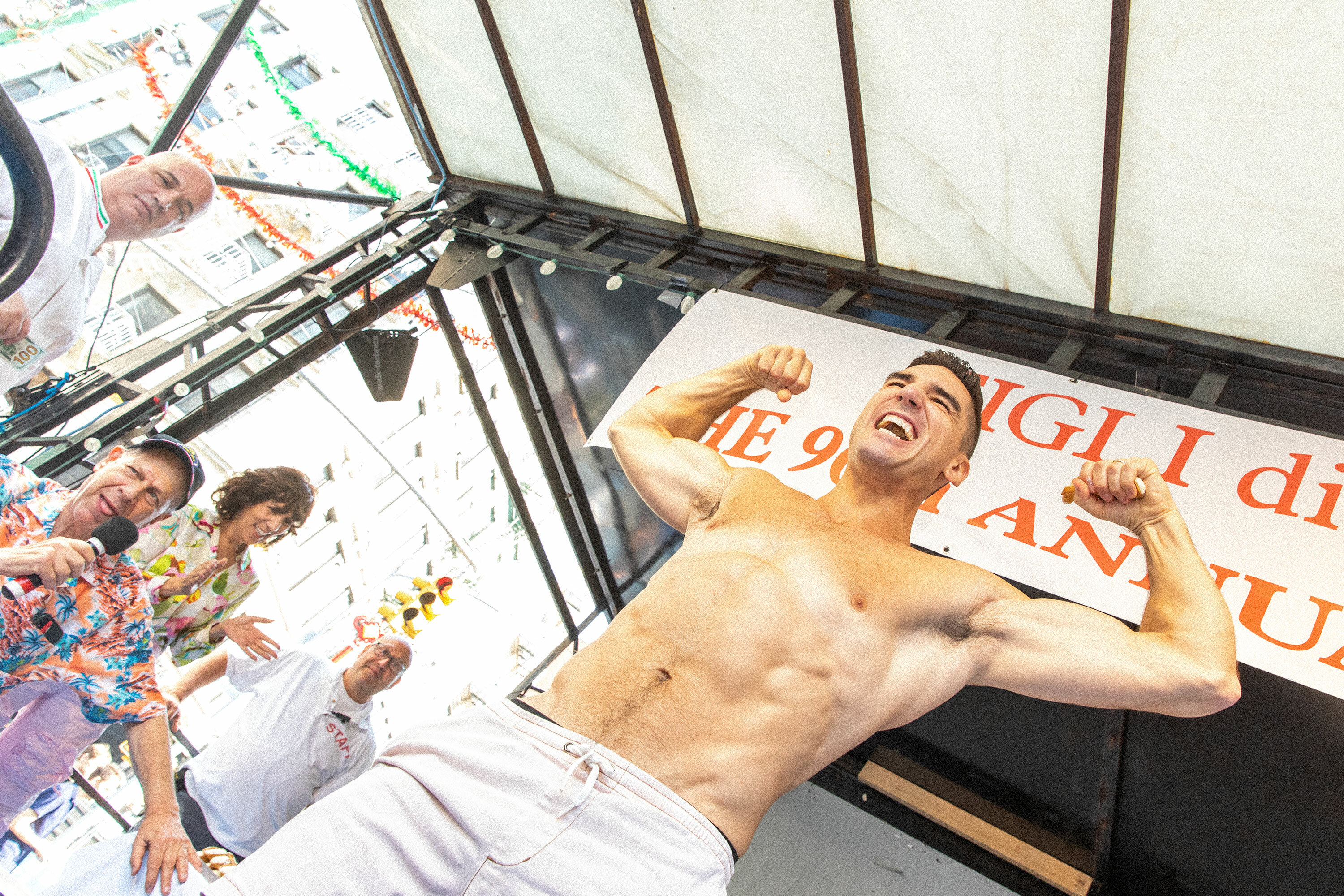 If you’ve never watched grown human beings shove full-size cannoli down their throats for six minutes, then I am not sure I could advise you do it. At its core, it is a visually unpleasant sight. For starters, six minutes feels much longer than you think it does when you’re watching people competitively eat cannoli. I know from experience. There I was last Friday, sitting second-to-front row at the Feast of San Gennaro in New York’s Little Italy, perilously close to the splash zone of the cannoli eating contest where cream and bits of flaky pastry were flying. One competitor visually struggling to hold back his puke. Another, her hoodie pulled tight, grimaced with her face painted with cream. One jacked guy munched through cannoli with surprising tenacity, his mouth open, little bits churning like trash in a compactor.

What an unusual sight to behold. 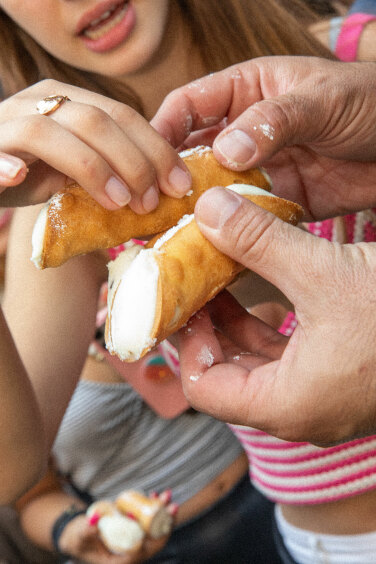 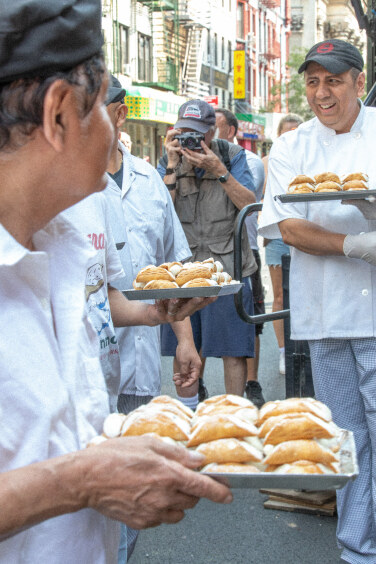 The cannoli makes it way to the stage.
Credit: Molly Flores

At some point, something shifted. Sure, it was pretty gross. That is a lot of sweets being eaten. But it was also kind of entrancing. Beautiful even? Here they were, 10 regular people, stuffing themselves rotten for the chance at…$100 in cash prizes. Nobody stopped eating. The winner tore through 18 cannoli in six minutes. One guy did puke. 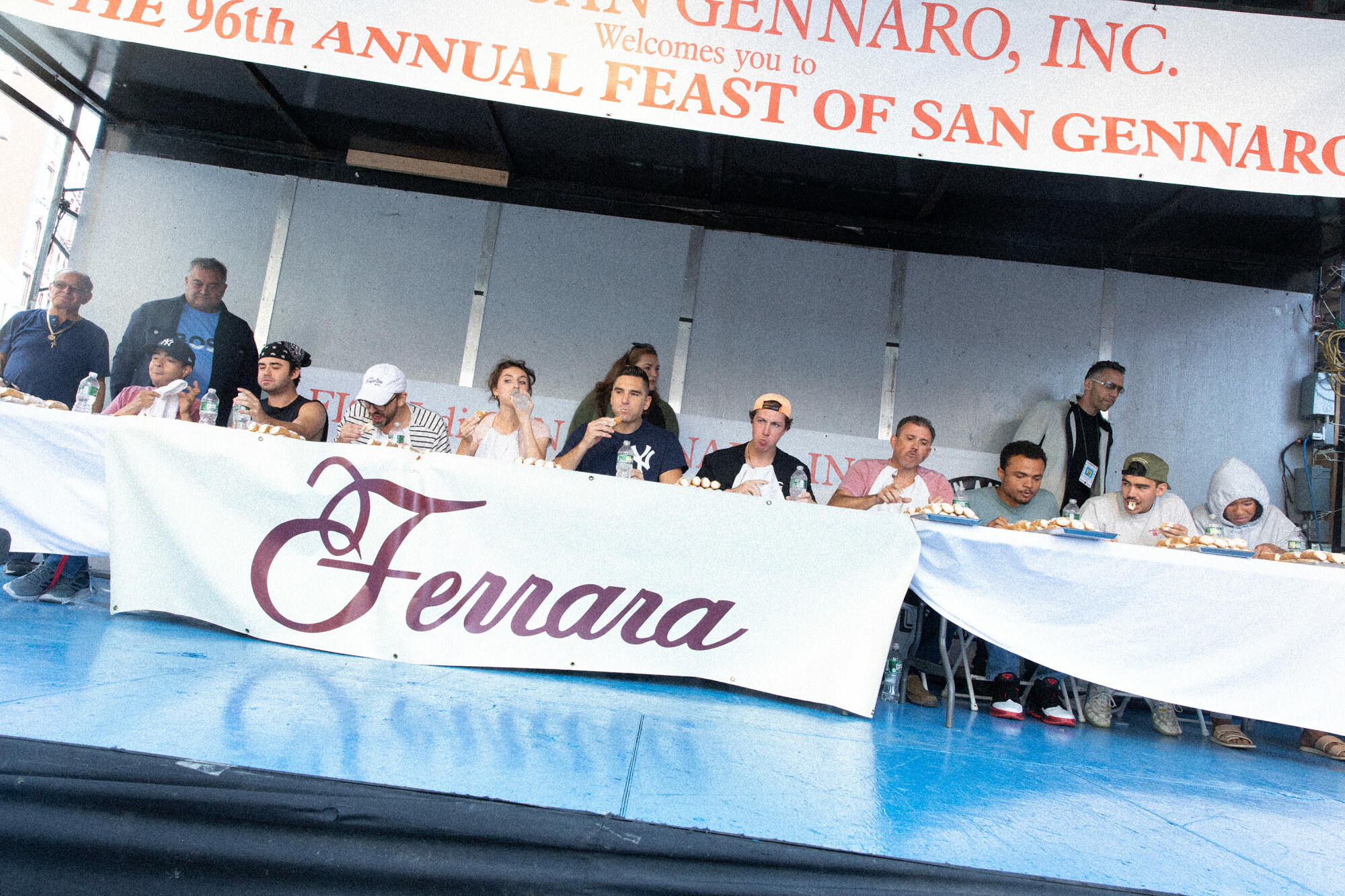 The stage where it all happened.
Credit: Molly Flores

More on that later, but let’s walk it back a bit. 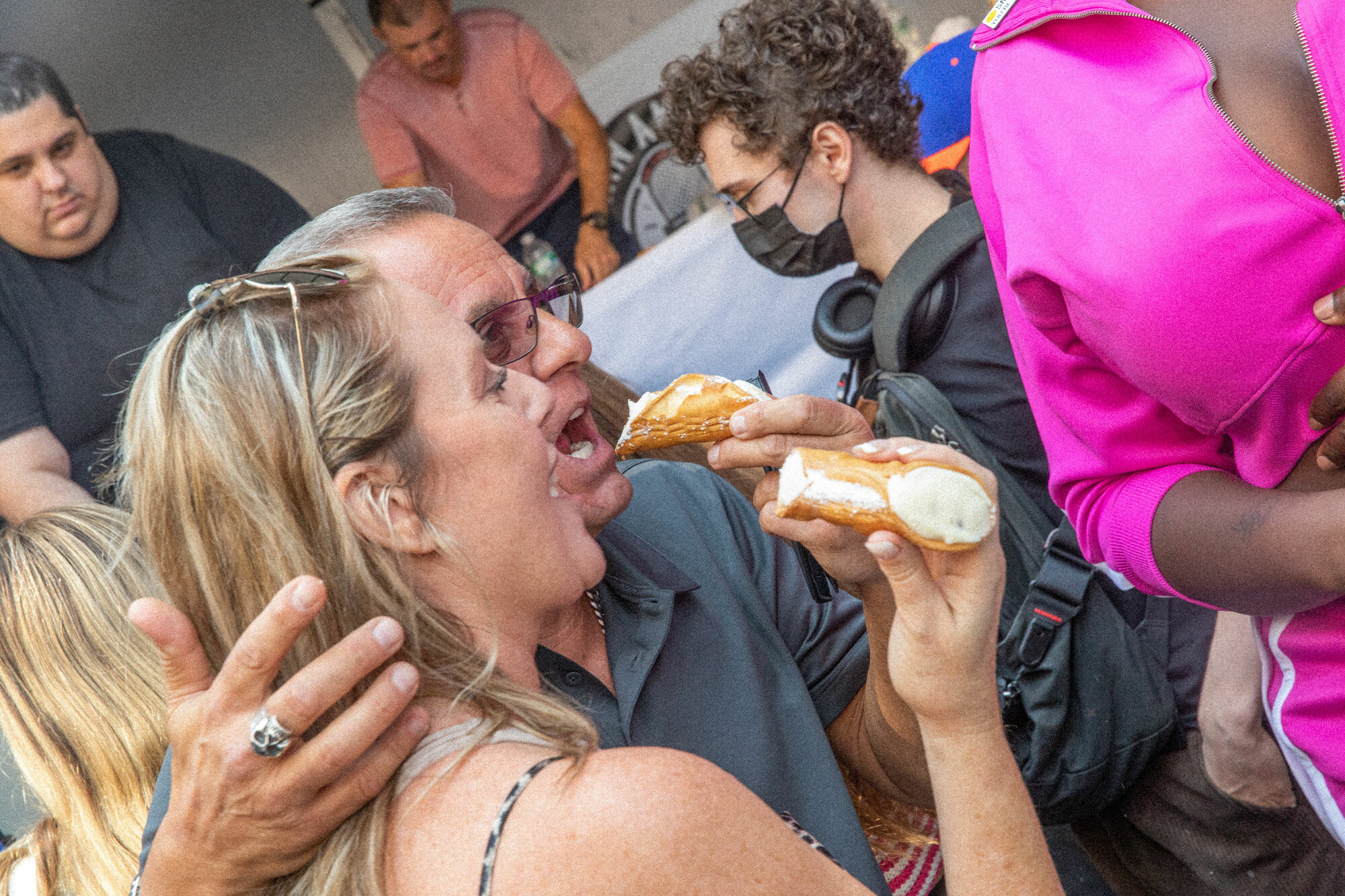 Cannoli for all.
Credit: Molly Flores

Plopped on the corner Mott and Grand Streets, adorned with a row of card tables, foldable chairs, and a banner for the Feast, was the cannoli-eating contest on Friday. Just down the street was Ferrara Bakery and Cafe, which made the cannoli for this year’s competition. It’s a historic place, traced back to 1892. Ernest Lepore, head of Ferrara’s, has a clear passion for the Feast, talking about its history and importance to the vendors in Little Italy. As for the competition?

“It’s the funniest, most disgusting thing,” he told Mashable. He’s not wrong. Though, the start of the contest is unassuming enough. People shuffled around, putting out chairs and clearing cars from the contest area. An older guy in a Hawaiian shirt yelled out orders through a microphone. He was the emcee of the event. The seats filled up, a crowd wandered in. Soon enough our host in the Hawaiian shirt began introducing the contestants.

To my surprise, these were all…everyday folks. I expected eating pros, but these were average joes. One guy worked at CBS Sports. Another woman came up from Philly to participate. Our host — pretty sure his name was Mort, but he was not in the mood to chat with journalists — started cracking wise with vaguely inappropriate jokes. 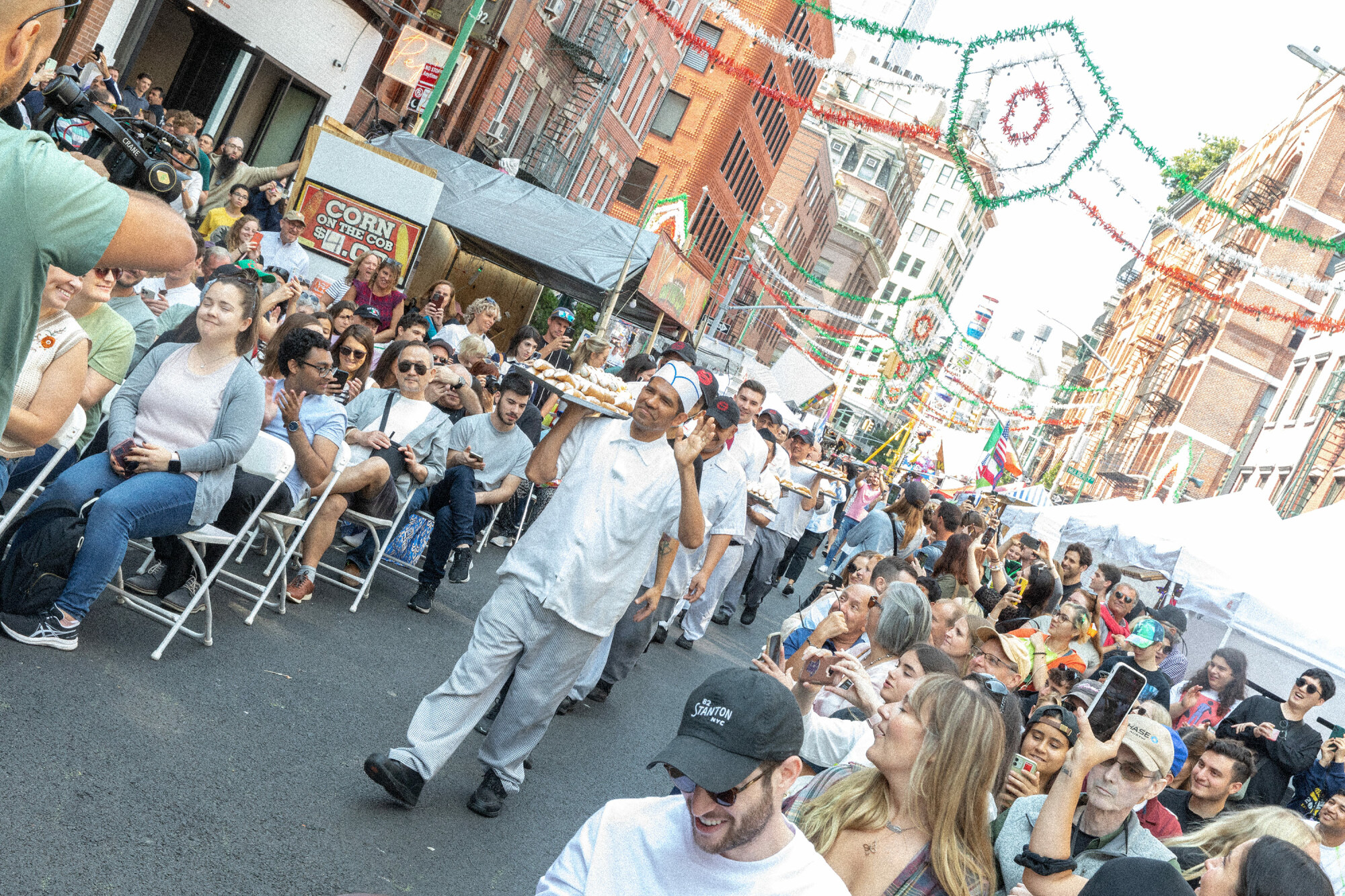 This is known as “the march of the cannoli.” Really.
Credit: Molly Flores

There was a surprising amount of buildup to the actual contest. First, we watched B- and C-list celebs file in. Garry Pastore , an Italian-American actor you’d be forgiven for not knowing. I’m pretty sure I spotted influencers and in the crowd. It was a strange, festive crowd — tourists who wandered in by accident paired with locals who’ve been coming to the Feast for decades. Finally, a little after one in the afternoon, the eating began. Part of the crowd watching the contest.
Credit: Molly Flores

From the very beginning there was a clear favorite. Matt Pruznick had won last year and was back to defend his title. Tall, jacked, and crew-cutted, he munched through cannoli like a silent drill sergeant. His jaws powered through the shells and cream like robotic gears. To be honest, it was clear Pruznick was going to win after about 30 seconds. But that didn’t stop others from trying. Will Biermann, wearing a Pittsburgh Steelers jersey and a bandana, ate with real tenacity. A young woman at the end of the stage pulled her hoodie tight around her head, as if to concentrate her focus on eating. Her entire face was covered in cream. It seemed everyone was trying their best. 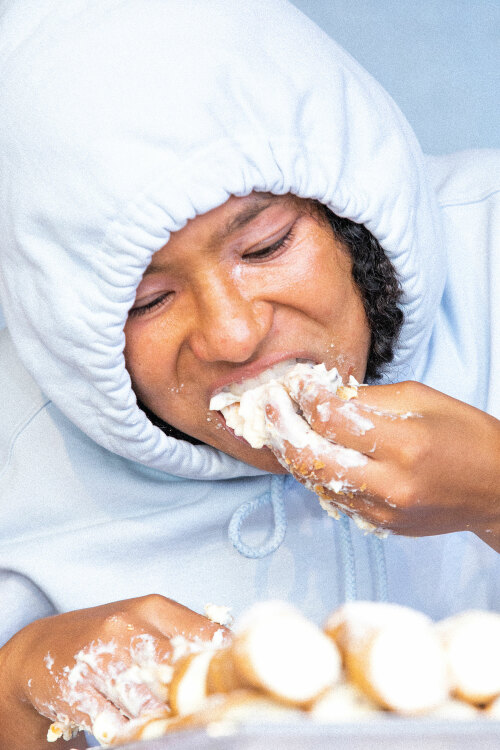 You have to respect the tenacity here.
Credit: Molly Flores 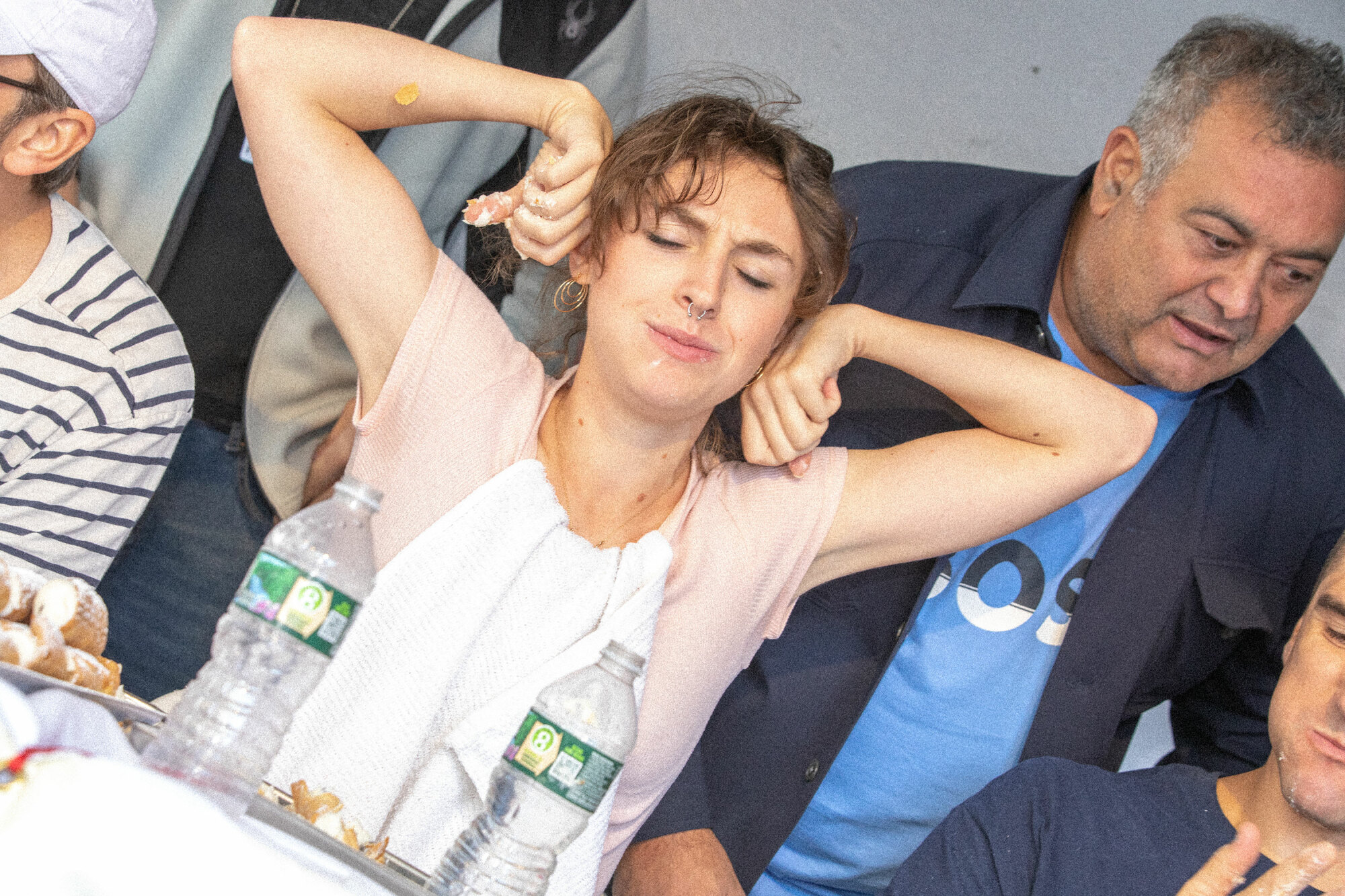 Time seemed to move slowly. I don’t know if you ever watched people gorge themselves on sweets before, but it’s even more disturbing than your run-of-the-mill eating competition. The first two minutes felt like 20 from my seat near the front row. You could see the pain of the cloying sugar on the contestants’ faces. You could watch their jaws tire and their stomachs turn. All the while the host yelled “EAT, EAT, EAT, , MANGIA, MANGIA.” 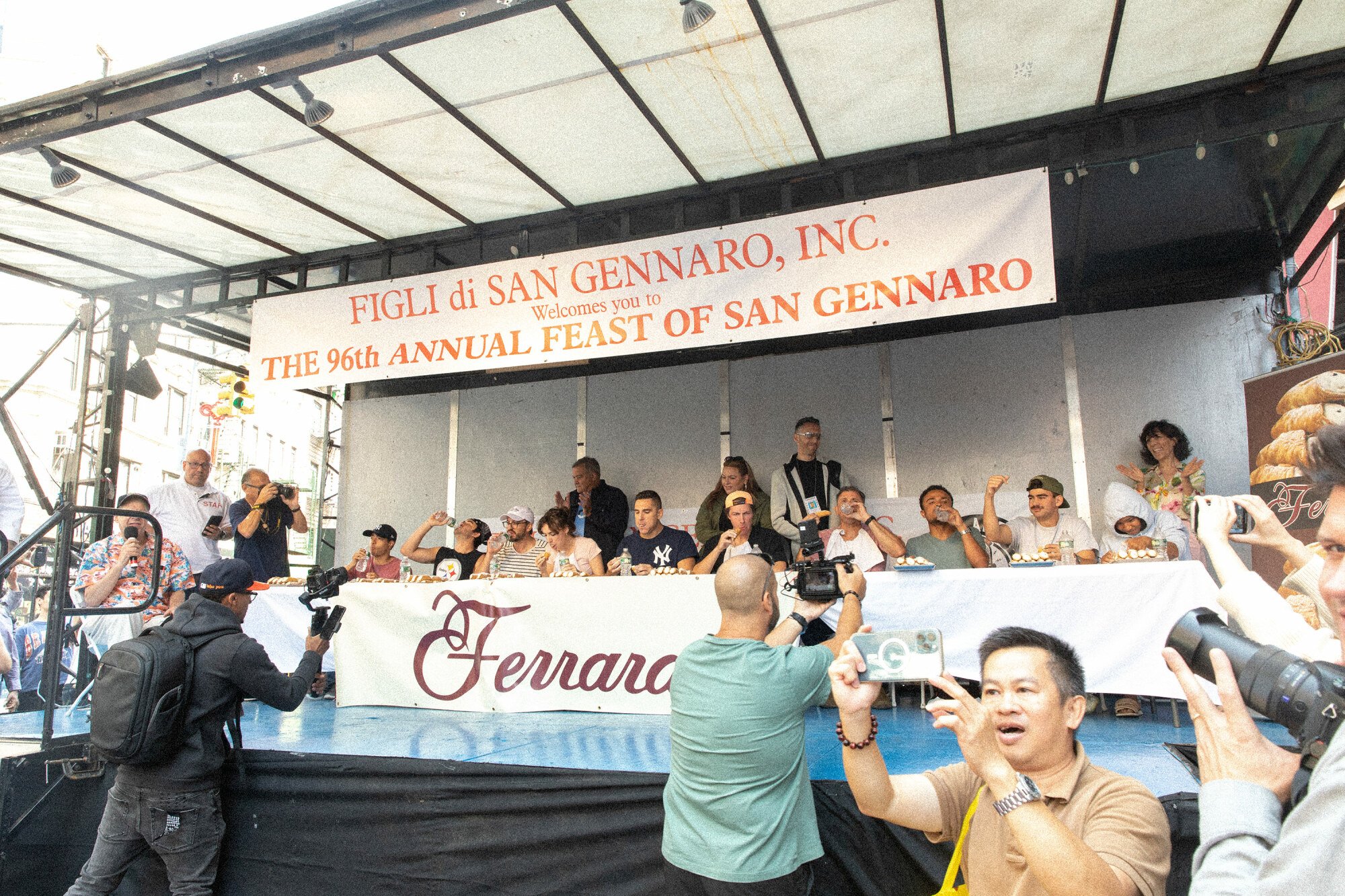 By minutes four and five of the contest, things were getting grotesque. Biermann, after tearing through an impressive 12 cannoli, blew chunks on stage. Most contestants’ chomping slowed to a crawl. A person or two basically quit, making half-assed, peckish bites like toddlers avoiding vegetables. It was a messy menagerie of cream and cookie, once happy faces now spoiled. 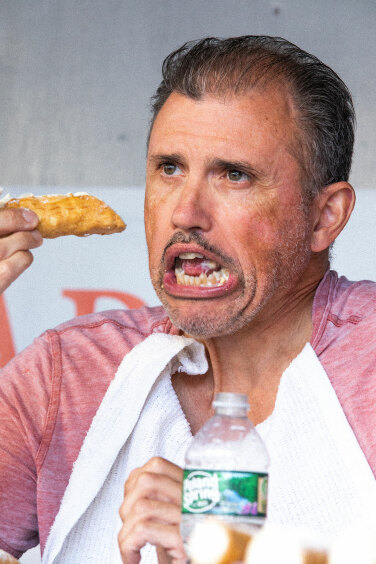 Pruznick, however, kept going, mechanical as ever if a bit slower than at the start. At some point Pastore and the other judges began standing behind him, just pointing, marveling, and waving money above his head to signal that’s who they’d bet on. In that moment, it was all over. All Pruznick had to do was digest. 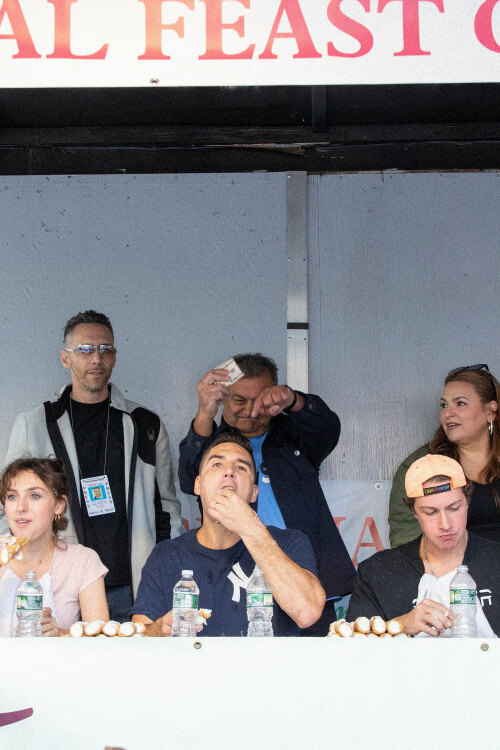 Pruznick won, eating 18 full-size cannoli in just six minutes. Not a Joey Chestnuts-level feat, but truly impressive for us mere civilians. Nobody seemed to come close to him. After it was all over, Pruznick ripped his shirt off and ate even more cannoli, as if to prove a point. Others weren’t feeling so hot. 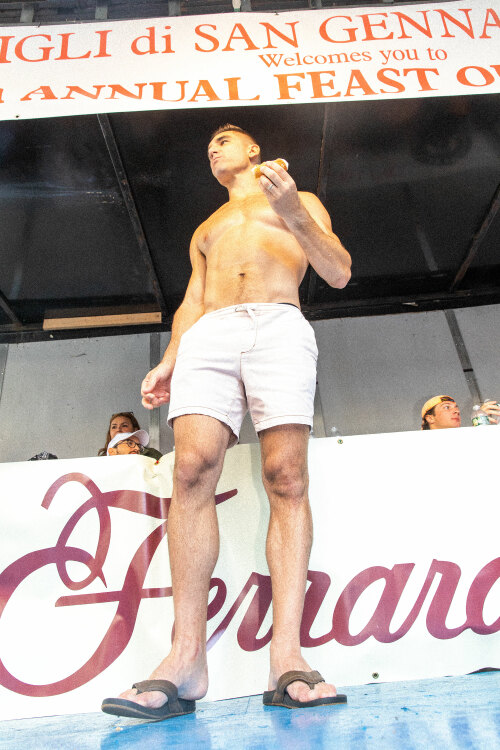 “I didn’t feel great,” Biermann told Mashable after the competition. “Minute five was tough for me… I was feeling it. Minute one, two, three? I could go all day. Four? Things started to turn. Five? I realized my fate.”

Biermann said he doesn’t even like cannoli but did it on a whim because it was his friend’s birthday.

Pruznick, meanwhile, said he’d come back to defend his title in 2023.

“I’ll be back next year,” he said. “I’m going to keep doing it until somebody beats me.”

He had more immediate plans however — somehow, someway, he had dinner reservations in a few hours. One benefit of participating in the contest: as many free cannoli as you can take.
Credit: Molly Flores