How to recycle Amazon packaging (yes, all of it) Amazon has become an part of our lives, as more and more people receive weekly — and even daily — packages from the company. But as these packages pile up on doorsteps all over the world, a glaring issue has emerged: How do you recycle all those damn boxes, bubble envelopes, and Prime Now paper bags?

Given the huge variety in packaging, the answer isn’t so clear.

Amazon does provide guidelines around the topic, and customers in the U.S. whose orders are fulfilled by Amazon can click on any order in the Amazon app and scroll down to the bottom to view recycling or discard instructions. People can also ask Alexa or Siri “How do I recycle my Amazon packaging?” and both will direct them to Amazon’s guidelines.

“While it is helpful to provide information, Amazon is continuing to place the burden on customers to manage its enormous packaging footprint. As U.S. and global recycling markets collapse, the truth is that very few plastics are still recyclable and, even if they are collected for recycling, most are not recycled. It’s time for Amazon to ditch all single-use packaging and transition to reuse and refill systems,” Pinsky, who works to make large companies reduce their single-plastic use, wrote in an email.

Too many used books? Want to help literacy efforts? Here’s what to do.

What’s more, in 2019, Amazon debuted a fully recyclable paper padded mailer. The company had shipped more than 200 million new mailers to customers as of mid-2020, offering the same recyclability as Amazon’s cardboard box but taking up less space in the recycle bin, says an Amazon spokesperson.

The company also debuted its “Less Packaging, More Smiles” campaign in 2020 as a way to use less packaging materials in its shipments while helping customers repurpose boxes before recycling. For example, you can reuse Amazon cardboard boxes in fun ways — like — all via a QR code on the box that provides instructions.

But these sustainability efforts might not be going far enough. As the Washington Post reported, in an effort to , Amazon is using more small plastic mailers rather than cardboard boxes.

Many of the plastic mailers it uses (like its regular and bubble-lined plastic bags) include plastic film. Amazon notes on its website that some cities have curbside recycling programs, and if your city doesn’t, Amazon provides a to find a drop-off location (which the website says refers to retail stores, municipal recycling centers, and private recyclers) that will take plastic film. However, Pinsky says this website isn’t exhaustive because it doesn’t include a list of complete options for some areas.

There also aren’t that many cities with recycling programs that accept plastic film, says Darby Hoover, a senior resource specialist who works on plastic waste issues at the Natural Resources Defense Council (NRDC), an environmental advocacy organization. When it comes to recycling centers, even if they do accept plastic film, it can be hard, if not impossible, to process, as they often get caught in the center’s machinery, a spokesperson from the recycling, landfill, and compost operator wrote in an email.

In 2021, the company attempted to address the plastic-film concerns and redesigned many of these plastic products to be more sustainable, increasing the recycled content of plastic film bags from 25 percent to 50 percent, and from 15 percent to over 40 percent for its plastic padded bags. The improvements are expected to eliminate more than 25,000 metric tons of new plastic each year moving forward, according to the company. In March 2022, the company also announced its partnership with the BOTTLE consortium, a U.S. Department of Energy research initiative to reduce plastic pollution, to design new modes of plastic chemical upcycling. Additionally, Amazon now offers on-site plastic film recycling at more than 168 Amazon sites across North America and Europe.

Pinsky still suggests conducting your own research to find drop-off locations and asking your supermarket if they recycle plastic film.

And then there’s the paper address label. If it’s a self-adhesive label, it’s probably not recyclable, Hoover says. “It’s pretty upsetting to see Amazon has gone in this direction by putting more single-use plastics on the market,” Pinsky says.

Although online shopping has become the de-facto way of living, it shouldn’t just be the customer’s responsibility to figure out how to recycle. Companies need to step up, too, Hoover says.

In the meantime, here’s how to recycle Amazon’s packaging. 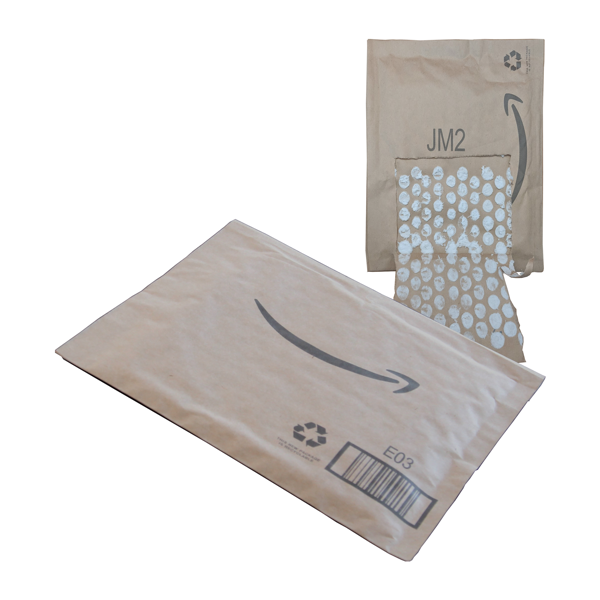 Amazon says these paper padded mailers are recyclable, just like cardboard boxes and other paper items.

Paper products should be accepted by most curbside recycling programs, says Pinsky similarly. 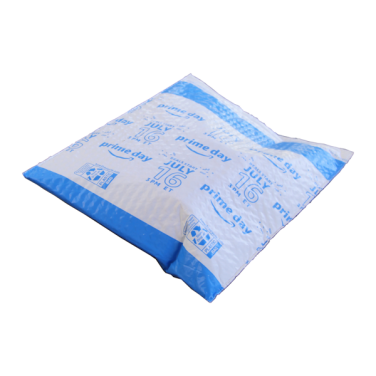 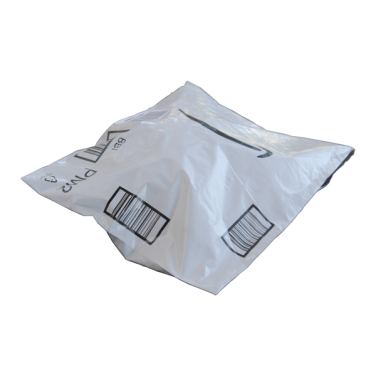 Some cities offer curbside recycling, Amazon writes on its website. If your city doesn’t, Amazon provides a where you can enter your zip code to find a drop-off location that accepts plastic film, which these bags contain. 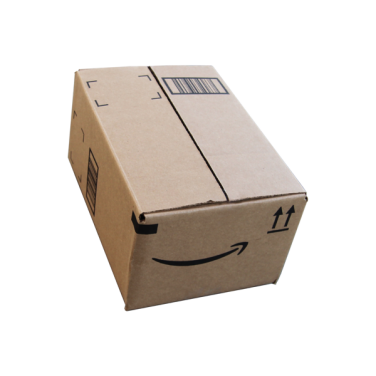 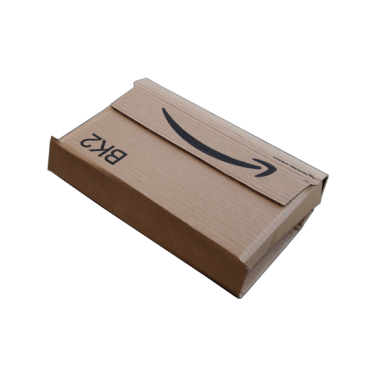 Cardboard boxes and folders can be recycled in most curbside recycling, Amazon states on its website. It also says to remove any tape before recycling.

Still, you should check with your local government to see what is recyclable and learn how and if you’re supposed to prepare these materials in a particular way, Hoover says.

For example, New York City people to flatten cardboard boxes and then tie them together with strong twine before setting them out for recycling.

You can also use your . 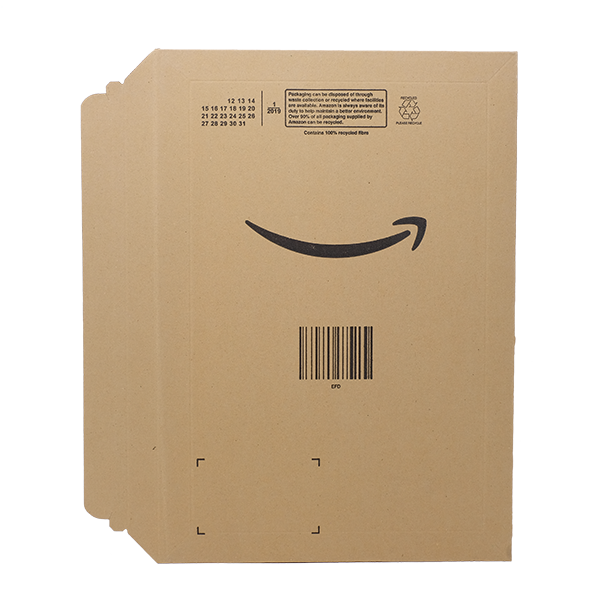 Amazon says its paper envelopes are recyclable in most curbside recycling programs. 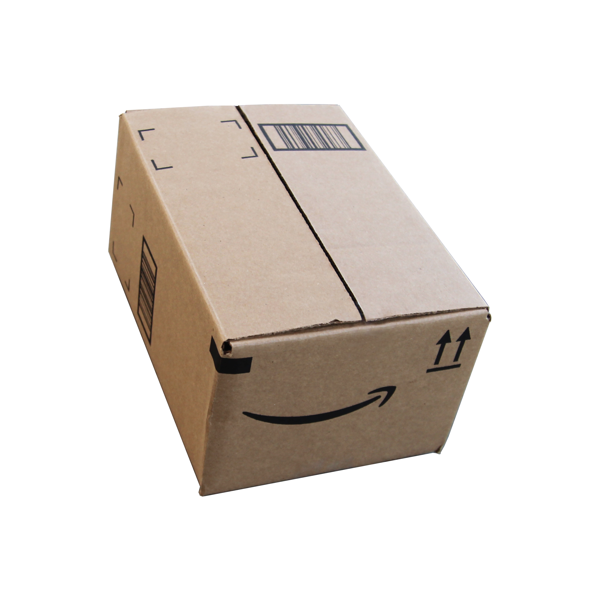 Give your Amazon cardboard box another life by donating your stuff with it.
Credit: AMAZON

If you have an extra box lying around, you can also give it a second life. Just fill a box with items you wish to donate, for free, and ship it at no cost to you through UPS or USPS. Your old things will be re-homed to charities through Amazon’s partnership with , and you can write off the donation on your taxes. 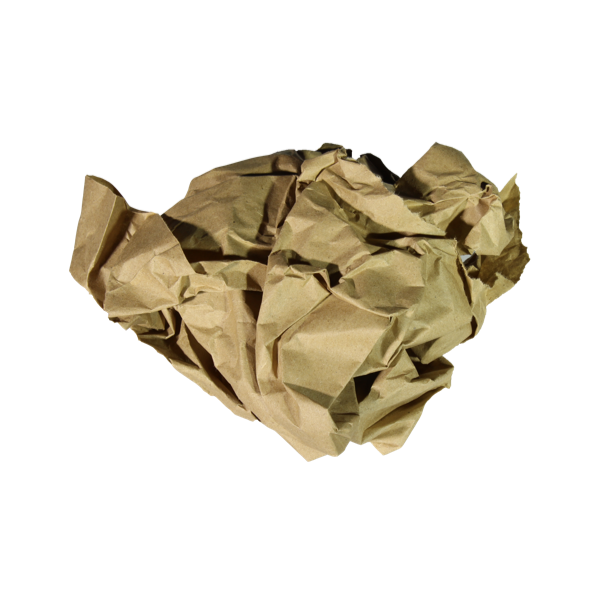 Packing paper is recyclable through most curbside recycling programs, Amazon writes on its website. 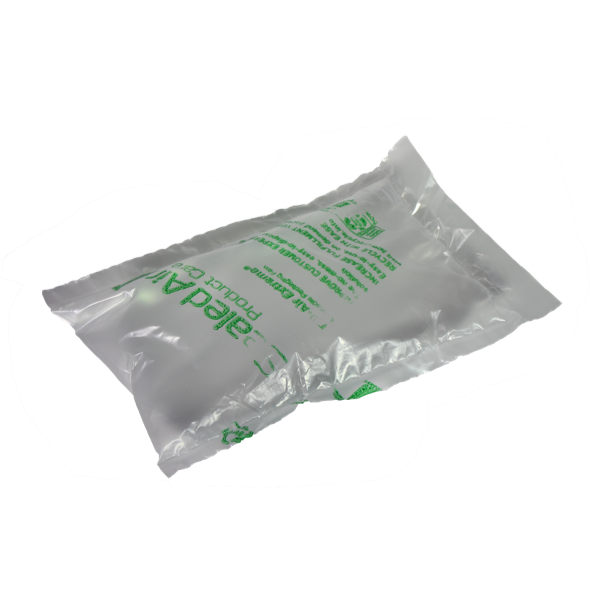 Amazon suggests you either recycle its air pillows curbside, if possible, or find a that accepts them. Like Amazon’s plastic bags, air pillows contain plastic film, which means the packaging is harder to recycle.

When you are able to recycle them, Hoover suggests first popping the air out of the pillow and then bringing it to a drop-off location. 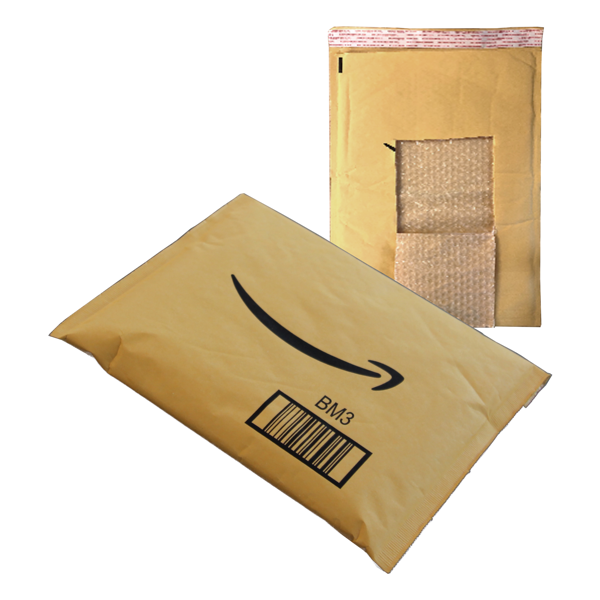 Paper mailers with air bubble padding are not recyclable and should be put in the trash, Amazon says on its website. However, Amazon also says you can check with your local recycling program for more details but doesn’t explain what they mean by this.

Pinsky, for his part, advises throwing out these mailers. 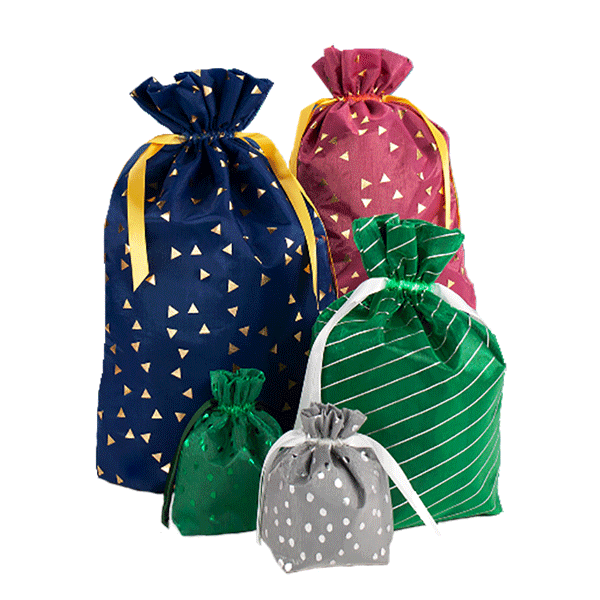 As you’ve probably guessed by the name, Amazon encourages you to reuse these gift bags. But once they’re no longer presentable, you’ll have to chuck them in the garbage bin.

Pinsky advises avoiding these gift bags altogether. Most of the bags will end up in landfills, incinerators, and the environment.

Instead, he says, “get creative with other ways to share gifts that don’t require single-use plastic bags, paper, or other materials.” 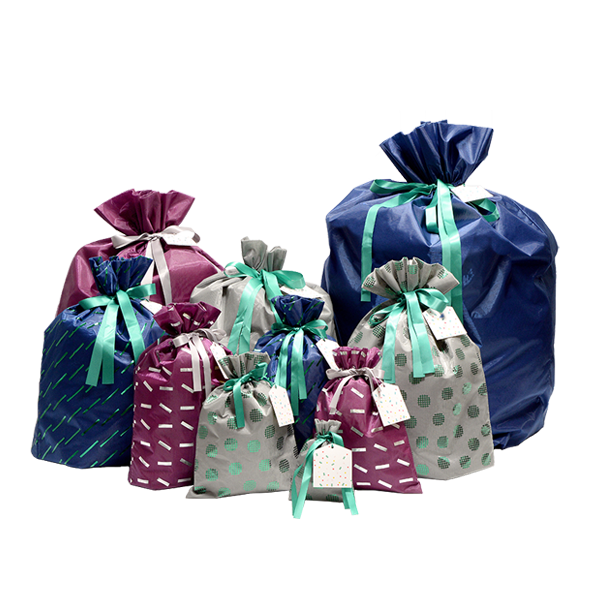 This gift bag improves on Amazon’s reusable gift bag, but you still have to put it in the trash once you’re finished with it.

Even though this version is made out of 100 percent recycled material, and Pinsky commends this, the end result is still the same.

“While it is better for Amazon to use recycled materials than virgin plastics for its gift bags, these bags will inevitably end up in landfills, incinerators, our communities, and the environment. Amazon must do better, ditch single-use plastic packaging, and transition to reuse and refill systems,” says Pinsky.” 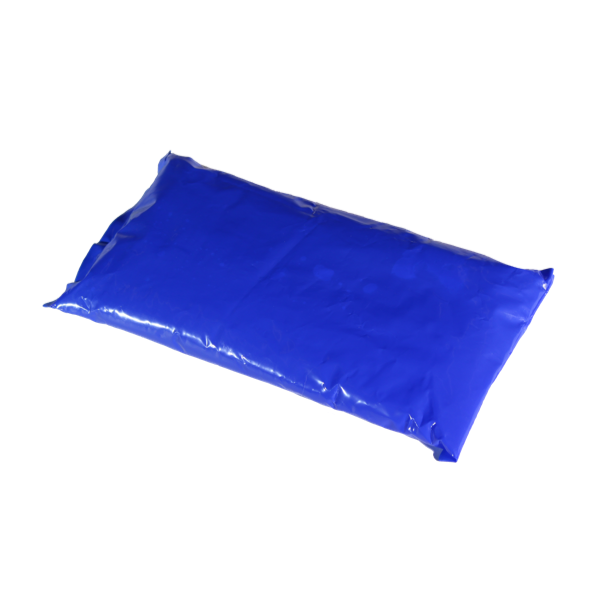 Gel packs are not recyclable and should be thrown out, Amazon’s website states. 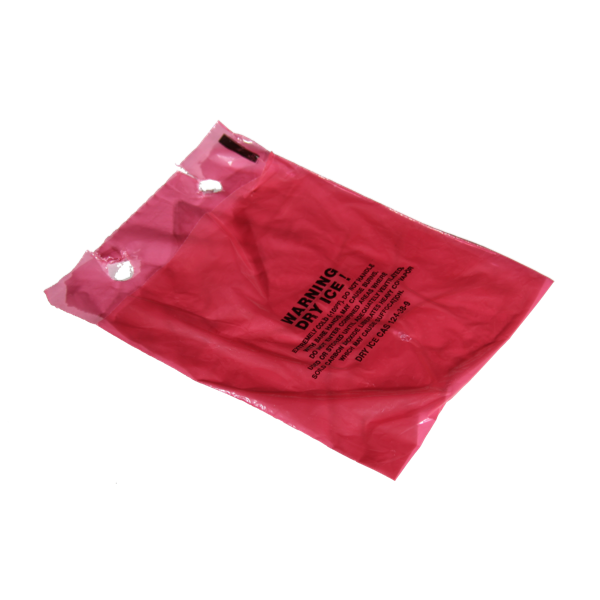 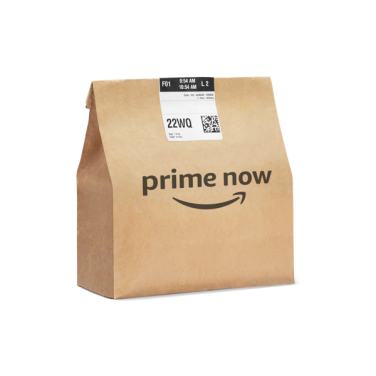 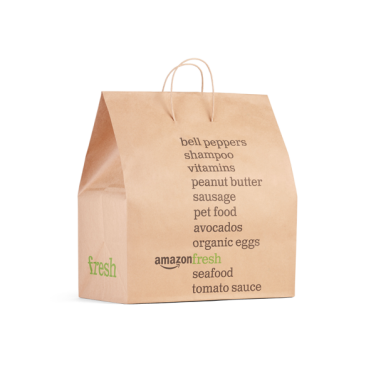 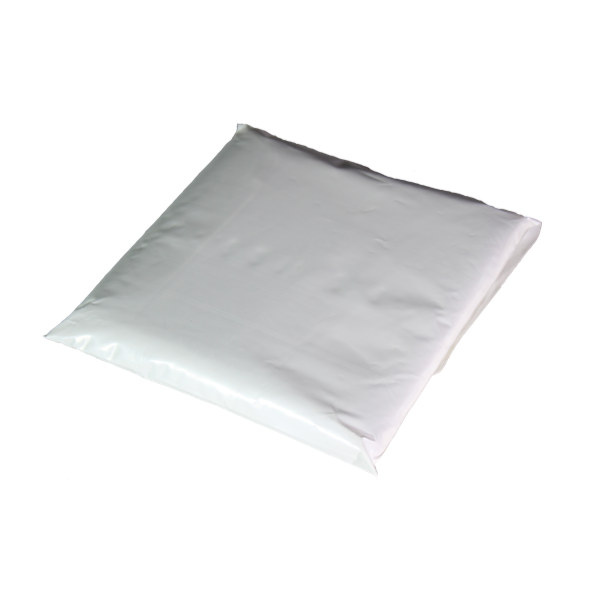 Amazon’s Prime Now insulated pouches are tricky to recycle. Amazon recommends that you first take out the insulating pad from the plastic mailer and cut the pad open to remove the plastic film. Then it says you can recycle the plastic film and mailer where #4 plastic is accepted, and the natural fiber pad where #60 cotton is accepted.

Amazon should list #4 film plastic on its website not #4 plastic, as many curbside programs accept rigid #4 plastic, but will not take any film plastics, Hoover wrote in an email. 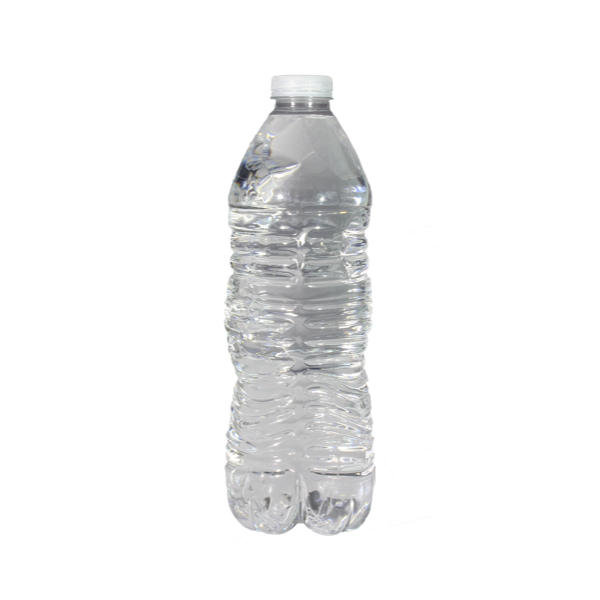 This is just a water bottle and can be recycled in most curbside recycling programs. Amazon states on its website that these water bottles are used to cool items like food, but you can also drink the water, so don’t let it go to waste. 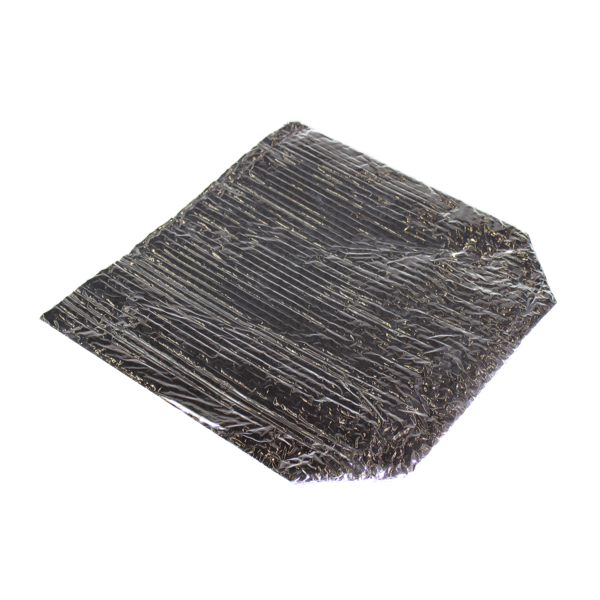 Amazon says foil insulation can’t be recycled and should be thrown out. 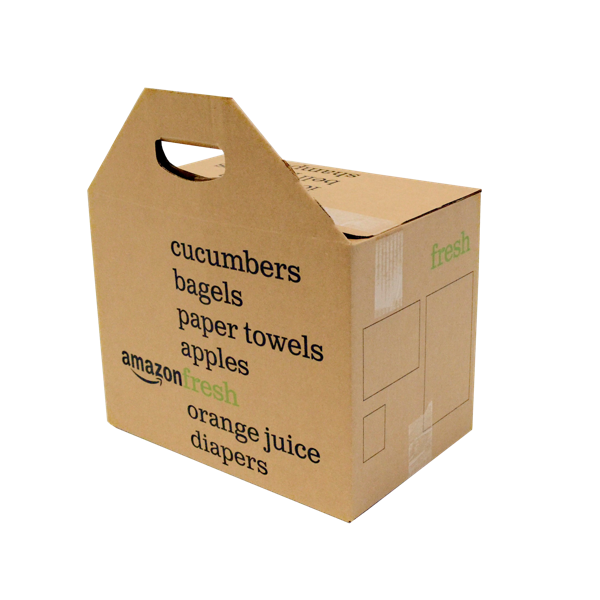 The Amazon Fresh Cardboard Box can be recycled like Amazon’s Prime Now and Fresh Paper Bag, however, you should take off the tape before you recycle it, Amazon’s website states. 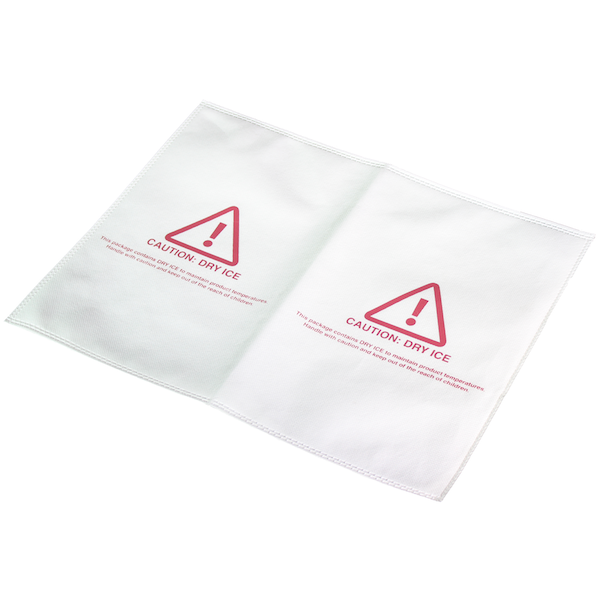 The Amazon Fresh dry ice pouch can’t be recycled, so you have to chuck it in the trash can. 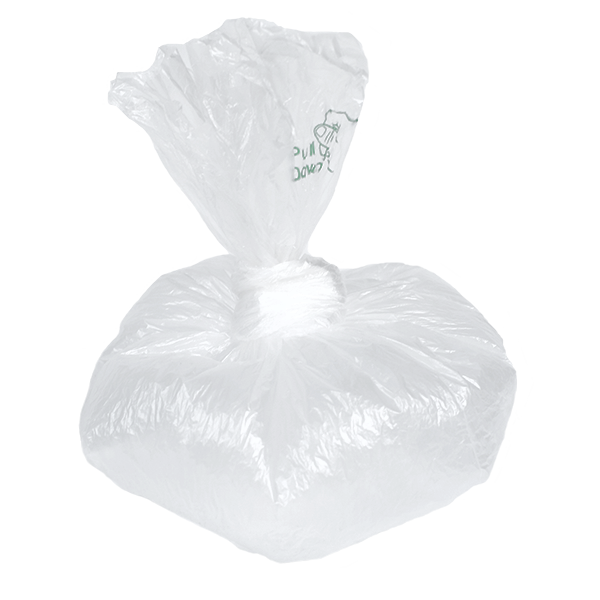 Again, because the product has plastic film it may be tricky to recycle because the film often gets stuck in recycling centers’ machinery. Amazon says some cities offer curbside recycling for its produce bag, but when not available, you can “use designated store drop-off locations where plastic film is accepted.”

It’s worth checking where you can recycle it first. Amazon provides a to find a drop-off location to do so, but you should do your own research and ask your supermarket if they accept the film, says Pinsky.

20. Bottom board and paper insulation 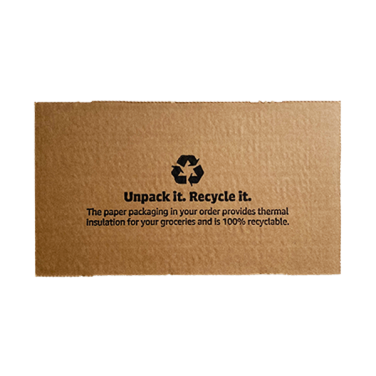 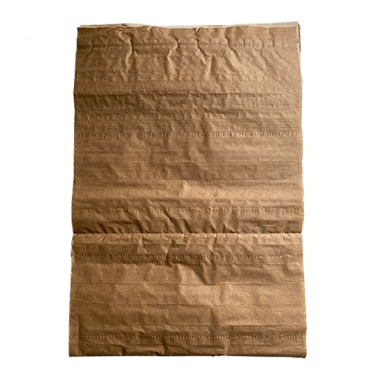 Both products are made of 100 percent cardboard. As such, Amazon says you can recycle both in your curbside recycling program.

UPDATE: Dec. 10, 2020, 9:56 a.m. EST This story has been updated and republished to include some of Amazon’s more recent sustainability initiatives, statistics on how much packaging material the company has eliminated, how to access Amazon’s recycling and discard instructions, additional comments and an updated quote from Greenpeace expert David Pinsky on both plastic film as well as Amazon’s available recycling and discard instructions, and packaging options not included in the original article.

UPDATE: Jul. 8, 2022, 9:45 a.m. EDT This story has been updated and republished again with recent initiatives and statistics.