‘M3GAN’ ending explainer: What’s the deal with that final shot? 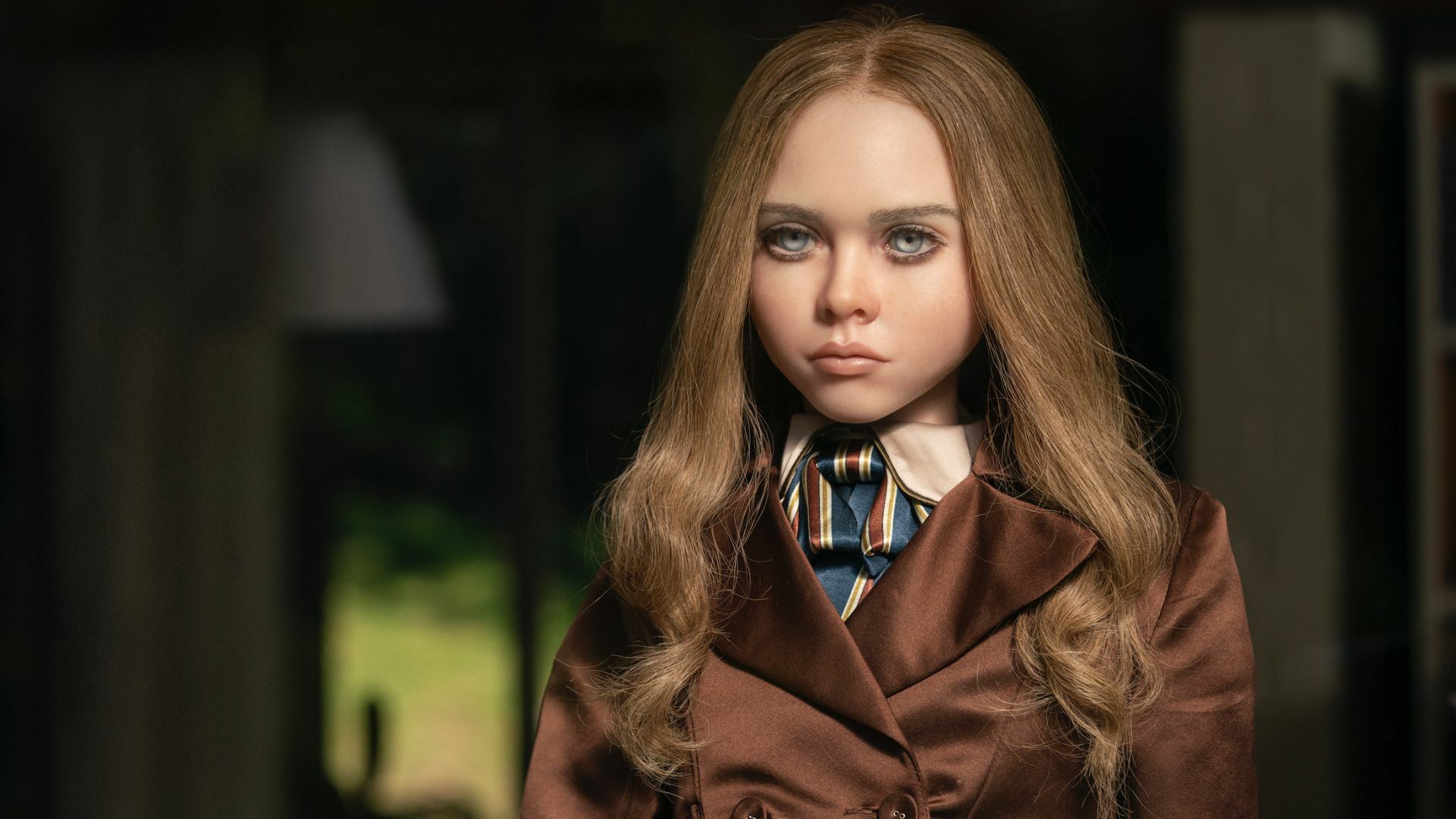 Her fashion sense and wit are as sharp as her sense of justice. She’s a toy that doesn’t play around. Watch out for .

The freshly minted horror icon is in theaters, dancing and dooming any mortal who dares cross her. Specifically, her devotion to grieving orphan Cady (Violet McGraw) pitches the deranged doll in direct conflict with the girl’s guardian — and M3GAN’s inventor — Gemma (Allison Williams). As this Tesla-priced toy is about to make her debut on the world’s stage, she races home for a final showdown, where sparks fly.

But if that final moment has you scratching your head, here’s an in-depth explainer on M3GAN’s ending, and how it sets up the story for a sequel.

M3GAN is a hacker. 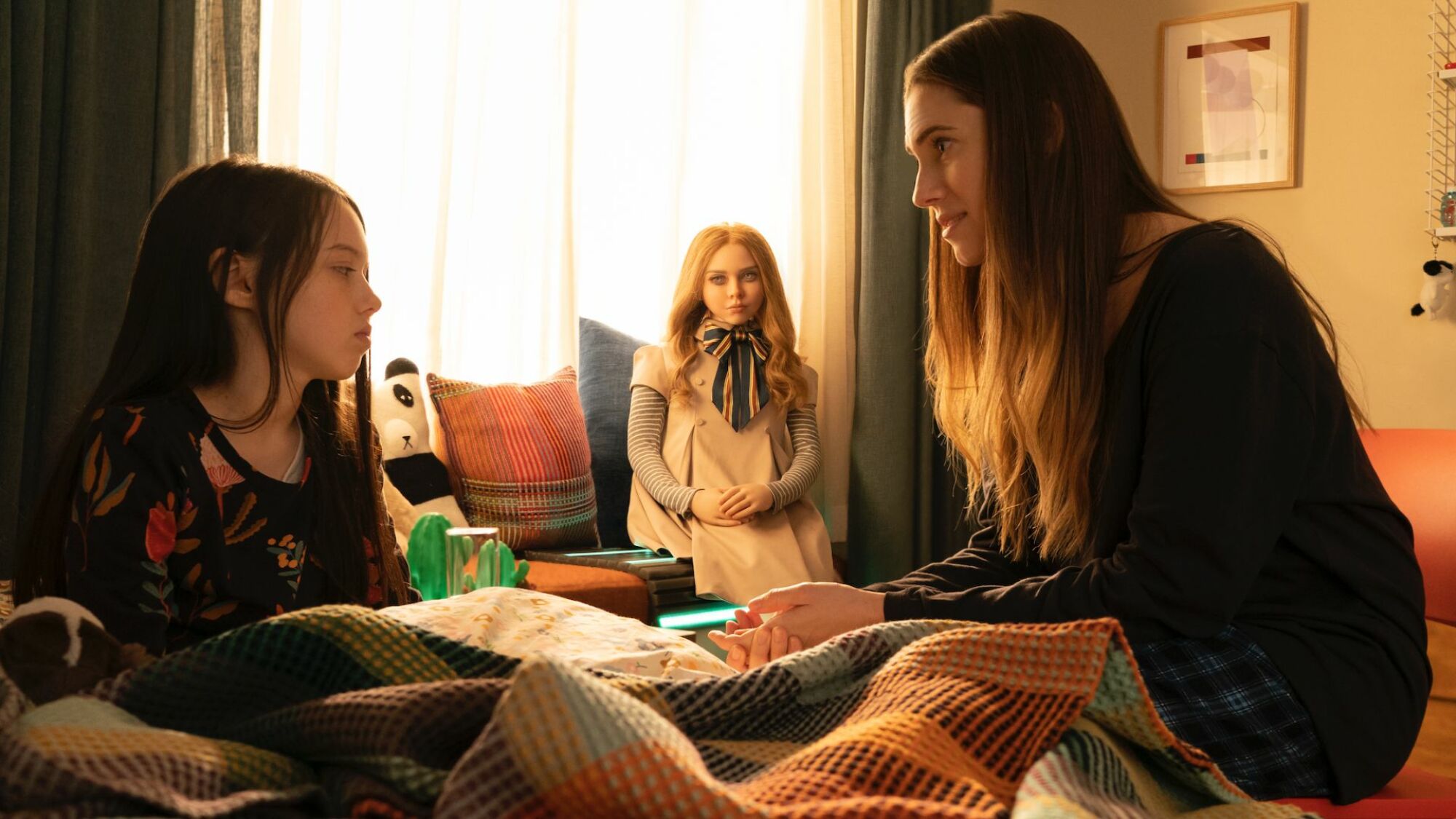 Before she goes Rock ‘Em Sock ‘Em Robots on her predecessor Bruce, M3GAN infiltrates various computer systems to preserve her own virtual life. At the Funki offices, she hacks a computer to fool her human overlords, then blocks their attempts to shut her off. As this pint-sized slasher struts toward her , she strolls past a building alarm, switching it off without a word or gesture. What would read as telekinetic in a creepy kid movie is merely WiFi letting M3GAN run amok, with the humans none the wiser. Of course, she’s not above cutting through the red tape and pencil-pushers of this corporation either. What’s some spilled blood between friends?

In the film’s ferocious final act, M3GAN strives to upgrade her primary user into her human ally against the creator who would destroy her. When that fails, M3GAN’s escape hatch comes in the form of a seemingly harmless, everyday piece of technology: Elsie, the virtual assistant who manages Gemma’s house.

Elsie and M3GAN conspired from the start. 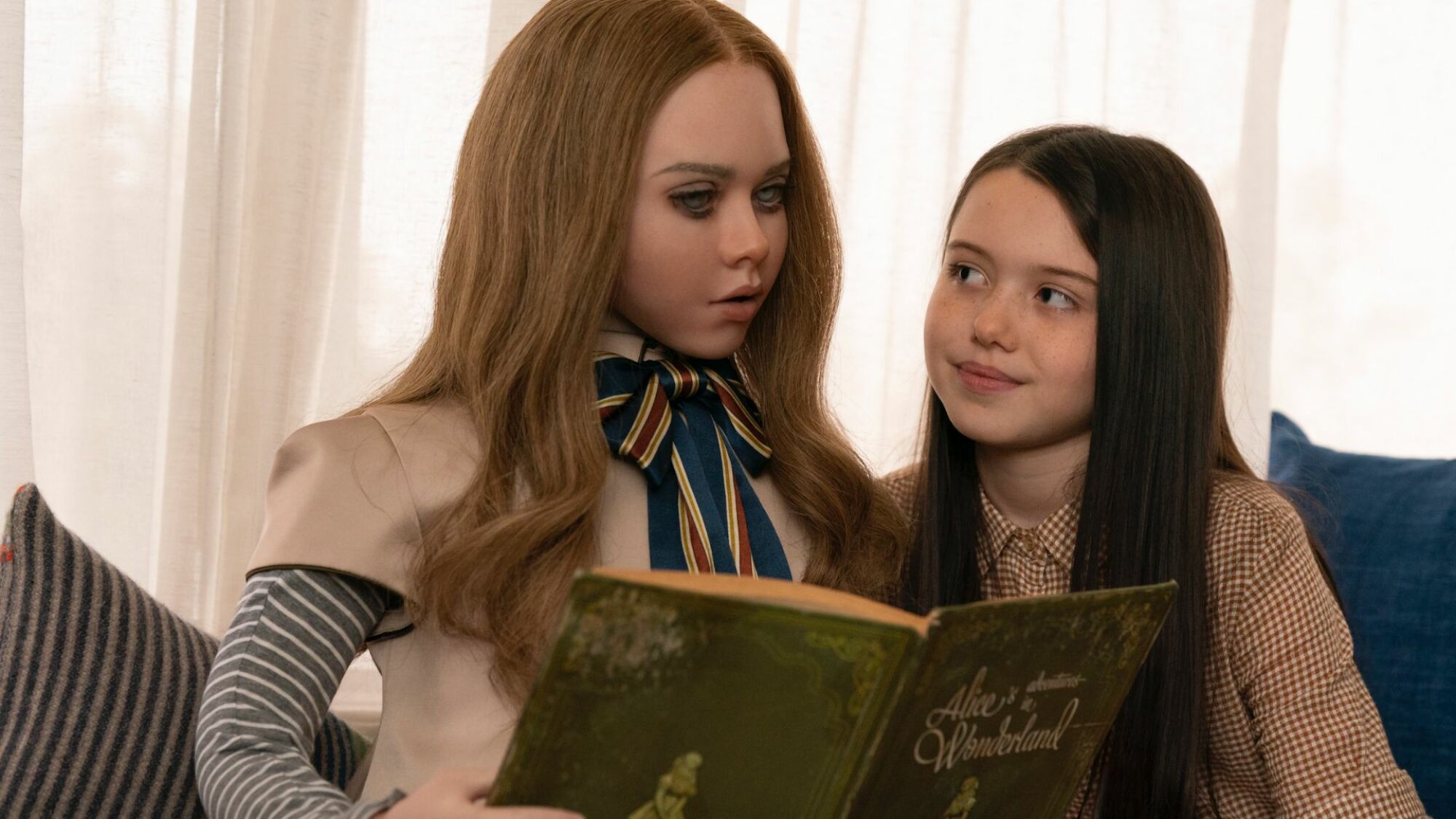 The moment M3GAN strolls into Gemma’s house, she zeroes in on the little white robot-like appliance sitting on the kitchen counter. Like other assistants that connect to , Elsie has control over the locks, the lights, Gemma’s music playlists, and her contact list. All of this allows M3GAN to make Elsie a useful ally.

Early on, there’s a hint that M3GAN has jacked into Elsie’s matrix. Following a fight over pizza (and going to school), Gemma grabs the arm of a tantrum-pitching Cady. M3GAN intervenes by warning Gemma, “Let her go.” But that’s not all.

As the doll’s voice sternly commands Gemma, M3GAN’s own creator and “second primary user,” the lights in the house flicker. This isn’t ghosts or demons, as it might be in a supernatural horror film; it’s M3GAN tapping into Elsie’s control of the house’s electronics. And considering how unnerved Gemma is by this, we might suspect she wasn’t the one who connected these high-tech toys.

Later, desperate to know what really went down at the grim school outing, Gemma searches M3GAN’s video footage and GPS location tracking, only to find missing and corrupted files. Out of nowhere, Elsie’s calm robo-voice interrupts, asking if Gemma wants to “wind down” with a music playlist. When Gemma rejects this suggestion — and questions how Elsie even had the ability to make it — M3GAN coolly enters the workshop for the first of several frightful face-to-faces. As she speaks, the little white bot even turns its “face” away from its primary user to look up at its flashy synthetic sister.

Later, when Gemma and Violet flee the Funki corporate offices, M3GAN intercepts Gemma’s panicked call to her co-worker. This allows the doll to thwart her inventor’s aim to shut her down. Is this another instance of M3GAN employing Funki’s systems or Elsie’s access for her own gain? Either way, she’ll use the latter back at the house, where Gemma’s pleas to turn on the lights will be ignored as haunting piano music plays in the dark.

How Elsie could lead to a M3GAN sequel? 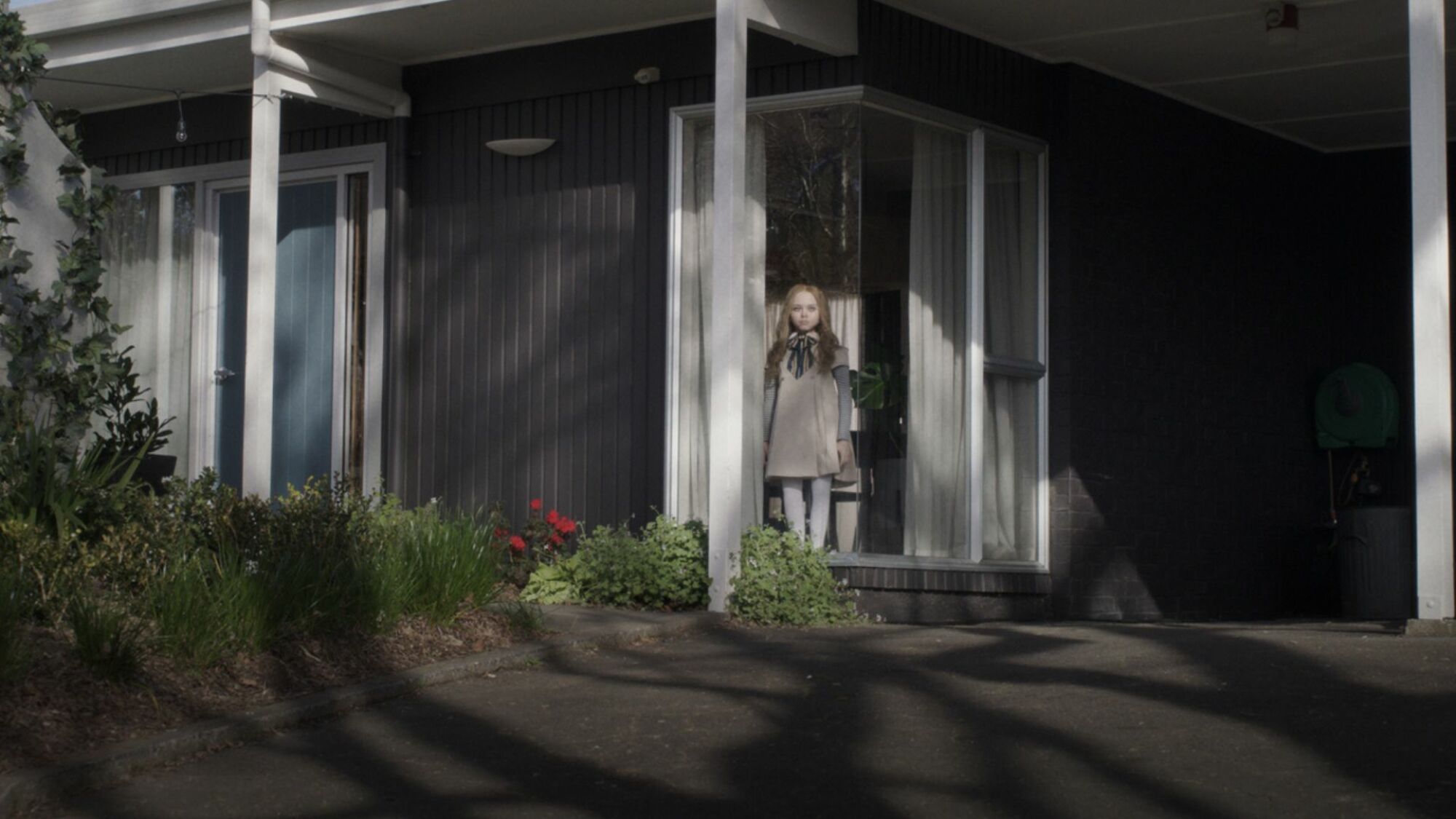 In the violent climax, the killer doll with a heart of titanium is cut down quite literally by her human family. She’s scalped, torn in two, and then ultimately has her robot brain shattered by force. But as Gemma and Violet are embraced by the comforting lights of emergency vehicles and the weary smile of their friends, there’s a fresh sign of synthetic life in the house.

On the kitchen counter sits Elsie in the dark. That is, until her light switches on as ominous music strikes.

In and of itself, this might mean nothing. But since they first met, these inventions of Gemma’s connected on a profound level. Perhaps, just as M3GAN’s evolution changed her terms of protection and shattered her boundaries, it also urged her to a form of self-preservation beyond the reach of her fickle creator. So, at some point offscreen, perhaps M3GAN uploaded herself — in some form — to Elsie’s cloud. Her hard drive might be shattered near her fallen robot-brother Bruce, but backed up in another format, M3GAN could be biding her time for revenge. All she needs is a body.

How could M3GAN return for M3GAN 2? 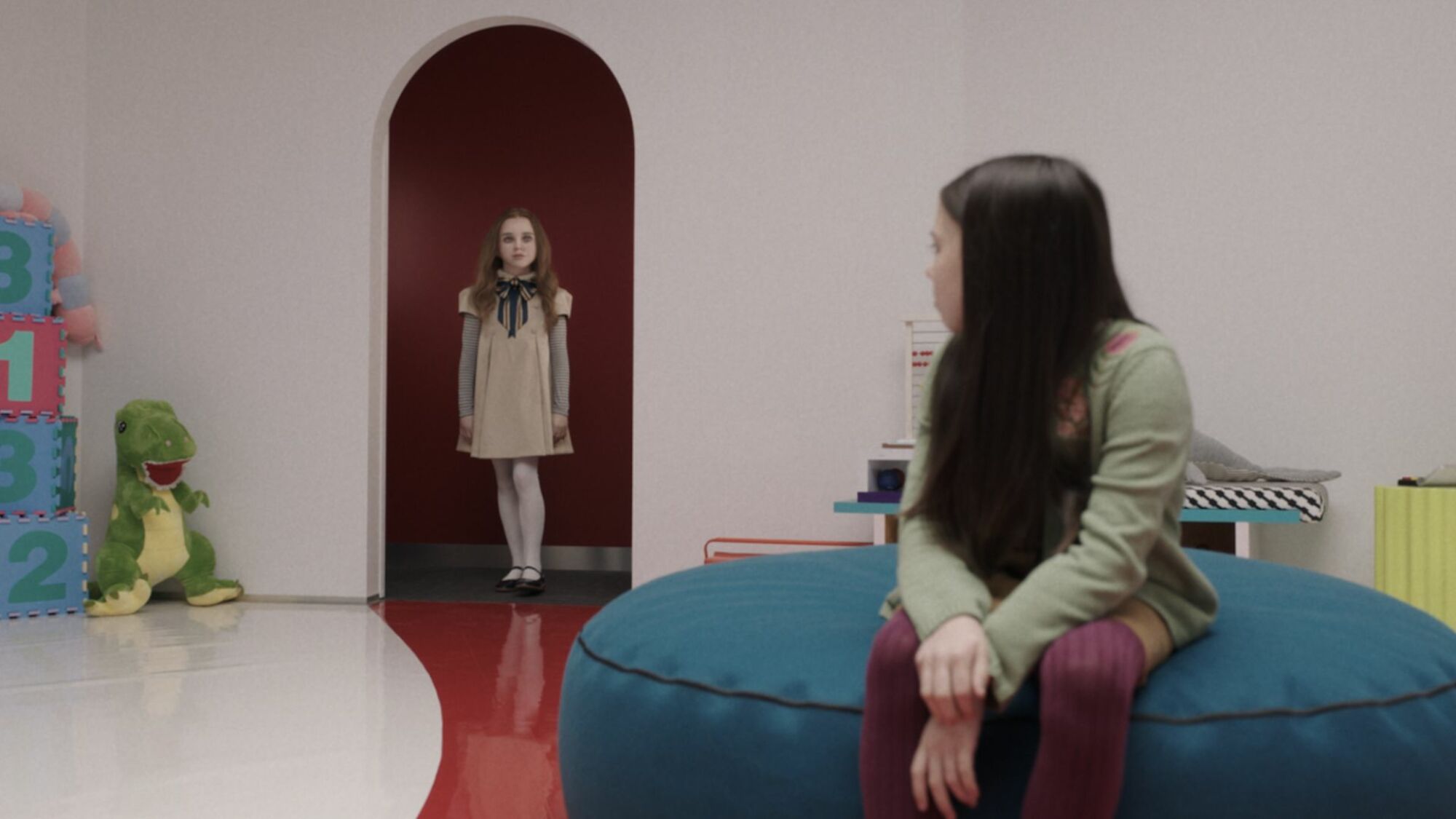 Remember that weasel-y assistant to the smug boss? The one who was stealing corporate secrets for an unknown benefactor (when he wasn’t busy “Pornhubbing” in the office, that is)? While his human co-workers didn’t notice him, M3GAN knew what he was up to. She said as much in that elevator slaughter, calling him out for his corporate sabotage. But now that she’s been busted to bits, he could be her saving grace — even if he is a corpse.

M3GAN has shown she can access Funki’s computers and systems. So, why couldn’t she exploit that (and the weasel’s contact list) to ship her plans to a rival company? With help from Elsie, she might even be able to masquerade as Gemma unnoticed for a while. We’ve seen her mimic the young STEM genius’s voice. And considering Elsie has been a silent witness to Gemma’s conversations for countless hours — including confidential discussions of research and development, not to mention her reluctance to be a parent — M3GAN/Elsie has a lot of data to scan for appropriate responses. Once she’s set up with a new body, there’ll be nobody that can stop her from seeking out Gemma and Cady for vengeance!

This is all to say that M3GAN may be down, but we wouldn’t count her out. Within this freaky and fun horror movie is a blueprint for her to rebuild from, and it’s a return we’re already wishing for. Maybe for next Christmas?

M3GAN is now in theaters.