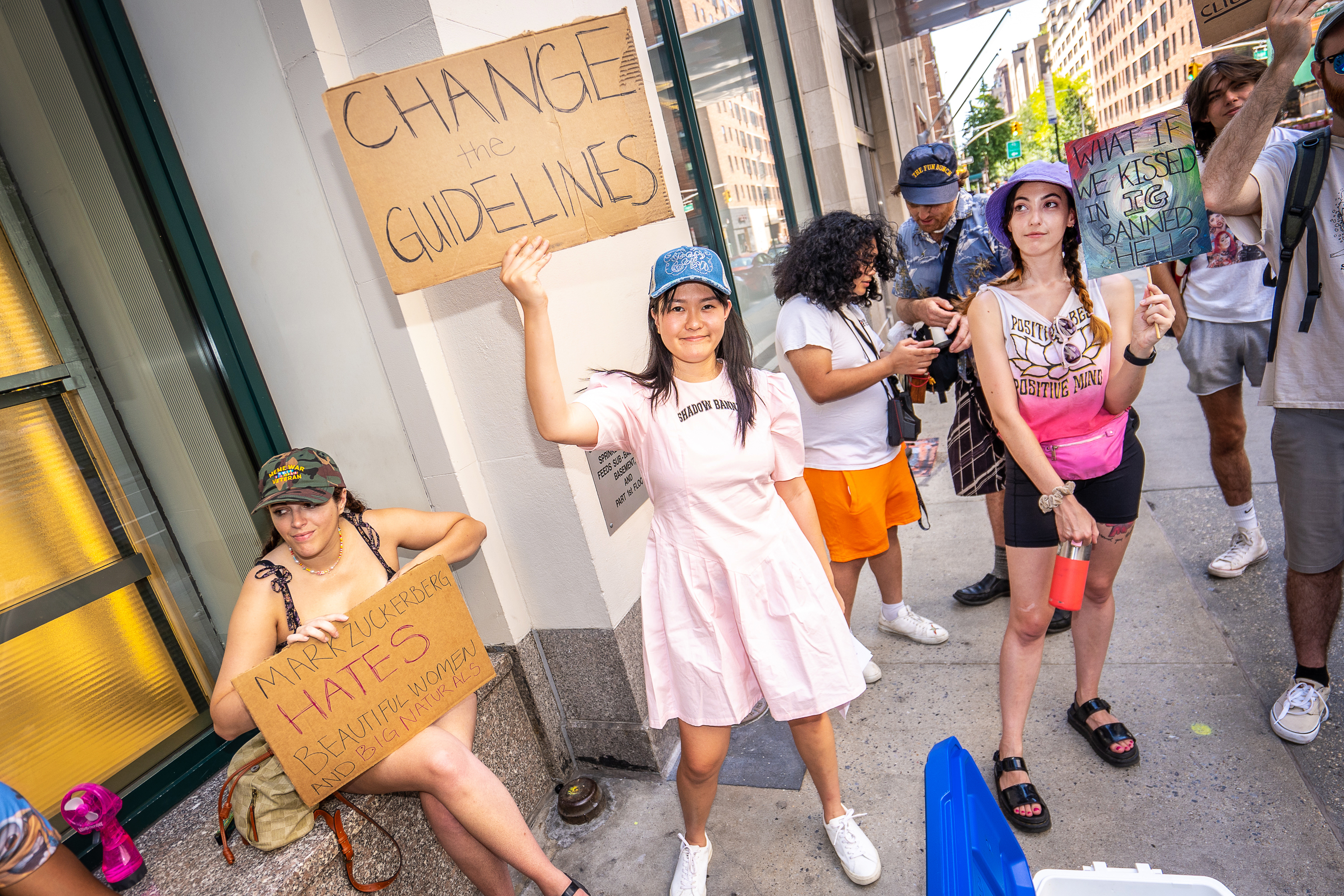 They called it the “Instarrection.” On Saturday, July 23, meme page creators took to the streets to demand more transparent community guidelines outside Instagram’s New York headquarters.

As expected, the admins and their followers came prepared with dozens of meme-inspired cardboard signs. One read, “What if we kissed in IG banned hell.” And another offered support with a simple message: “In solidarity with my fallen oomfs [one of my followers].” The protest culminated in several meme page admins handcuffing themselves to the building. One of the dozens of tongue-in-cheek signs at the protest.
Credit: Justin Skrakowski

The protest was spearheaded by eclectic meme accounts , , and in response to Instagram’s content moderation policies. According to these creators, they’re being deplatformed without clear reasoning. “Accounts get deleted all the time, and you have to follow everyone’s back up. Then half my feed is people complaining about Instagram, so we wanted to do something about it,” Anjelica, one of the co-organizers of the protest and the creator behind @hornymermaid, told Mashable. Anjelica has had 10 accounts deleted by Instagram.

“You get one violation, and then it becomes a downward spiral of stricter moderation of what they perceive as hate speech or violence when it’s really just words and pictures being picked up by algorithms,” Ana, the co-organizer of the protest who runs @neoliberalhell, told Mashable. “I had my whole account wiped for referencing ‘Work Bitch’ by Britney Spears because I used the word bitch. Meanwhile, there are lot of men who harass women online. I’ve faced harassment, and when I’ve reposted messages I’ve received I’ve gotten flagged for violation. It’s a very broken system.”

In an infographic posted to the Instagram account used to publicize the protest, , the organizers laid out their list of demands. It included things like, “We demand that artists, creators, and activists who monetize via this app are protected and have real support systems with real moderators to help users.” Many creators rely on Instagram for their livelihood, making the lack of security caused by shadowbanning and deplatforming a workers’ rights issue.

While the protest was planned by meme creators, sex workers, activists, and artists on the platform also attended. 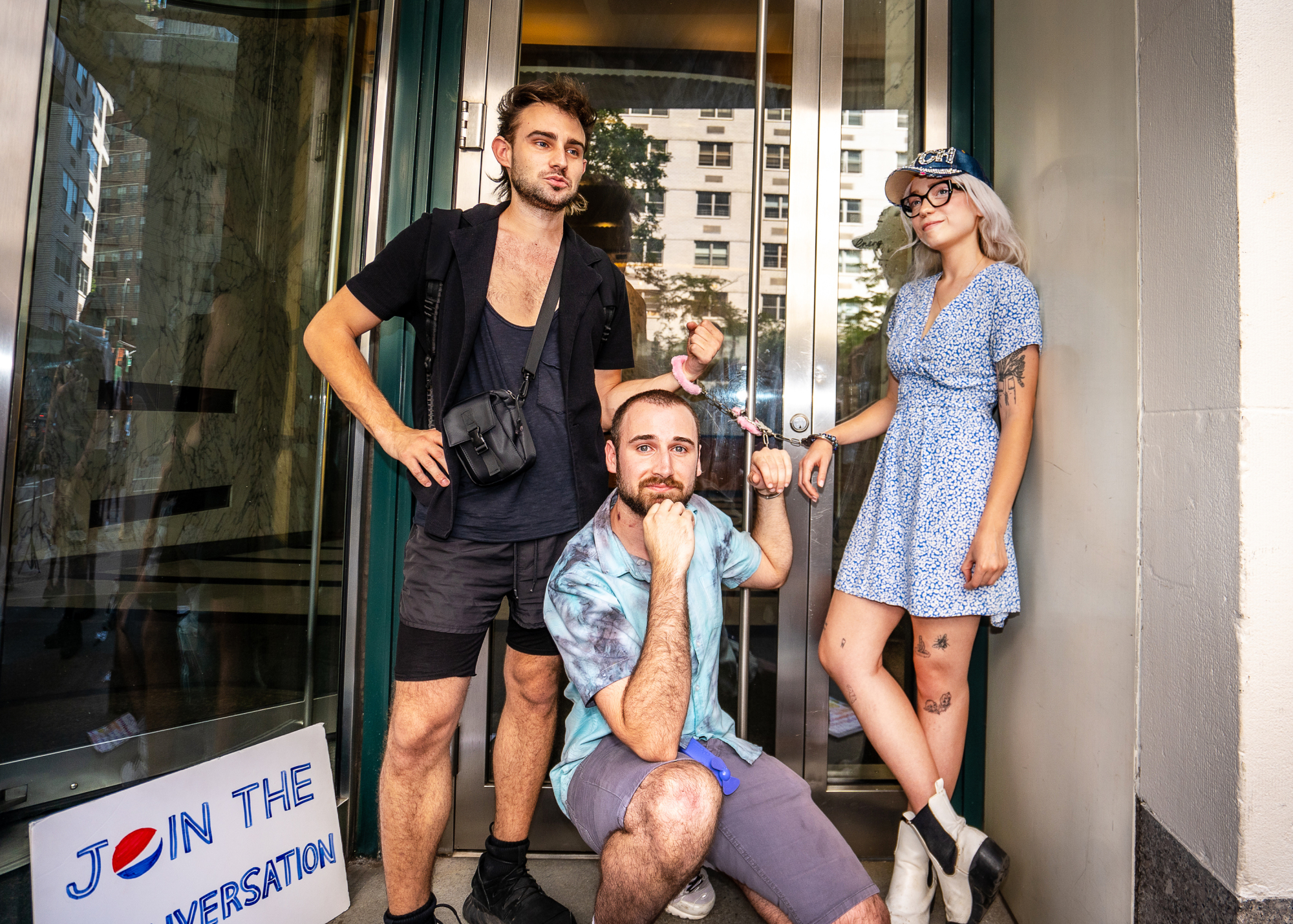 The protest culminated in several meme page admins handcuffing themselves to the building.
Credit: Justin Skrakowski

Organizers pointed to that found that high-profile Instagram accounts are exempt from normal content moderation guidelines and its enforcement as evidence that the system needs to change. They also expressed concern about censorship on the app, pointing to the recent example of .

“Yes, the people that are organizing it run meme accounts, but we’re also independent artists and creative people that really do care about the platform as a whole. We want to maintain the integrity of having everyone be able to express themselves freely, and have algorithmic justice,” said Anjelica. “Things need to change and censorship and silencing of artists, creators, and marginalized voices is a very important thing [that needs to be addressed].”

The protest is just the beginning of their efforts to change Instagram. Ana and Anjelica have been in contact with Ricky Sans, the head of memes at Instagram, and they hope to start a dialogue and working relationship with him and other higher-ups at the company.

They also plan to continue the momentum of the protest by planning other follow-up events and community organizing efforts.

Yes, the people that are organizing it run meme accounts, but we’re also independent artists and creative people that really do care about the platform as a whole.

Ahead of the protest, head of Instagram, Adam Mosseri, responded to a tweet from Washington Post journalist Taylor Lorenz, saying “We love memes, so I’m curious to learn more.”

In response to the concerns raised by Instagram creators, a Meta spokesperson told Mashable, “Meme creators have become a pivotal part of emerging culture and are vital to the Instagram community. We appreciate the concerns being raised and have begun a direct dialogue with the organizers to address their complaints. Our goal is to make it easy to understand our policies, have fair and transparent ways to know what is going on with their accounts and allow them to appeal when they think something’s not right. We are grateful for their feedback as we continue to explore ways to best support creators of all types on Instagram.”

Meanwhile, broader criticisms of Instagram’s algorithmic updates are mounting as the platform becomes increasingly reliant on ads and Reels. Even Kylie Jenner, who has more than 360 million IG followers, recently with a simple plea: “MAKE INSTAGRAM INSTAGRAM AGAIN.”