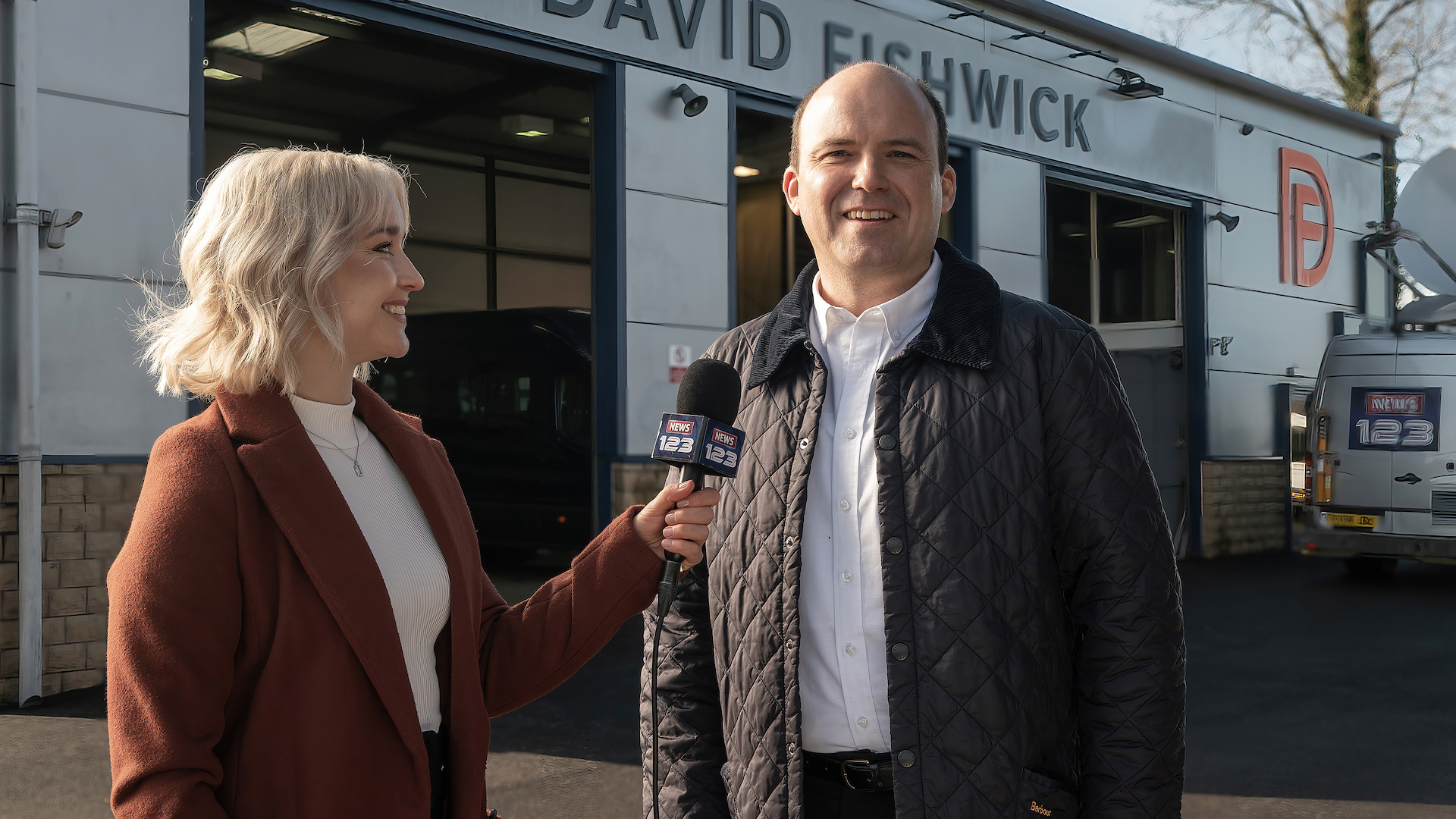 Finding financial freedom from the big banks and championing circular community economies seem like pretty established ideas in 2022, with and disrupting traditional ways of banking and placing emphasis on “damn the man” empowerment to manage your money.

But over a decade ago, the first new bank license in 150 years in the UK was awarded to a local businessman, Dave Fishwick, from Burnley, Lancashire, in the north of England, and it shook up the UK’s elite, London-based banking industry. And it wasn’t about greed — Fishwick aimed to open his own bank to support his community following the global financial crisis and beyond it.

Now, this David versus Goliath tale has become a film, filmed in Burnley itself and starring , , and James Bond franchise star Rory Kinnear in the titular role — if you watch any after having seen the film, you’ll see he did a bang-up job. He’s joined by lead Phoebe Dynevor and /In The Earth star Joel Fry, in a genuinely feel-good tale of sticking it to the institutions and finding a different way of doing things.

Is Netflix’s Bank of Dave a true story?

Bank of Dave is based on the true story of businessman Dave Fishwick, who wanted to open his own bank to support Burnley locals during a period of economic strife. A successful minivan dealerships owner, Fishwick would eventually open , in Sept. 2011, managing to gain the first new bank license in 150 years — but not after a tough fight against the long-established, hoity-toity banking sector based in London. And while it’s Fishwick operates the “Bank of Dave” in Burnley today.

After the global financial crisis in the late 2000s left communities in dire straits in Britain, with recession running rampant through the country, Fishwick’s customers were having trouble making payments, so he started lending them his own money — over £1 million in total. Then, he began making loans to families in the neighbourhood as well as small businesses, all of whom were unable to find the same loans from banks. “For all sorts of reasons, the bank wouldn’t touch ’em,” Kinnear’s Fishwick says in the film. Every one of Fishwick’s loans was repaid, and customers even asked him to invest their money, for which he needed accreditation — and this is where the Netflix film begins.

Fishwick wrote a book about his experience, , and Channel 4 made a documentary about it in 2012. For the Netflix film, director Chris Foggin, who’s previously worked on Edgar Wright’s The World’s End, found meaningful ways to draw out elements from the real tale — of course, as the credits tell you, “characters, events, and dialogue have been fictionalised to increase dramatic effect.”

‘Bank of Dave’ is filled with understated, highly compelling performances.

For the Netflix film of Fishwick’s experience, Kinnear relishes in the titular role as Dave, a sort of “heart and soul” of his community. By night, he enjoys a regular spot of karaoke at the local pub, and by day, he cuts the crap, monologuing on economic privilege and the UK government bailing out banks during the recession with taxpayer money. By both, he’s supported by his smart, savvy wife Nicola (Jo Hartley) and his smart, savvy niece, Alexandra (Phoebe Dynevor). 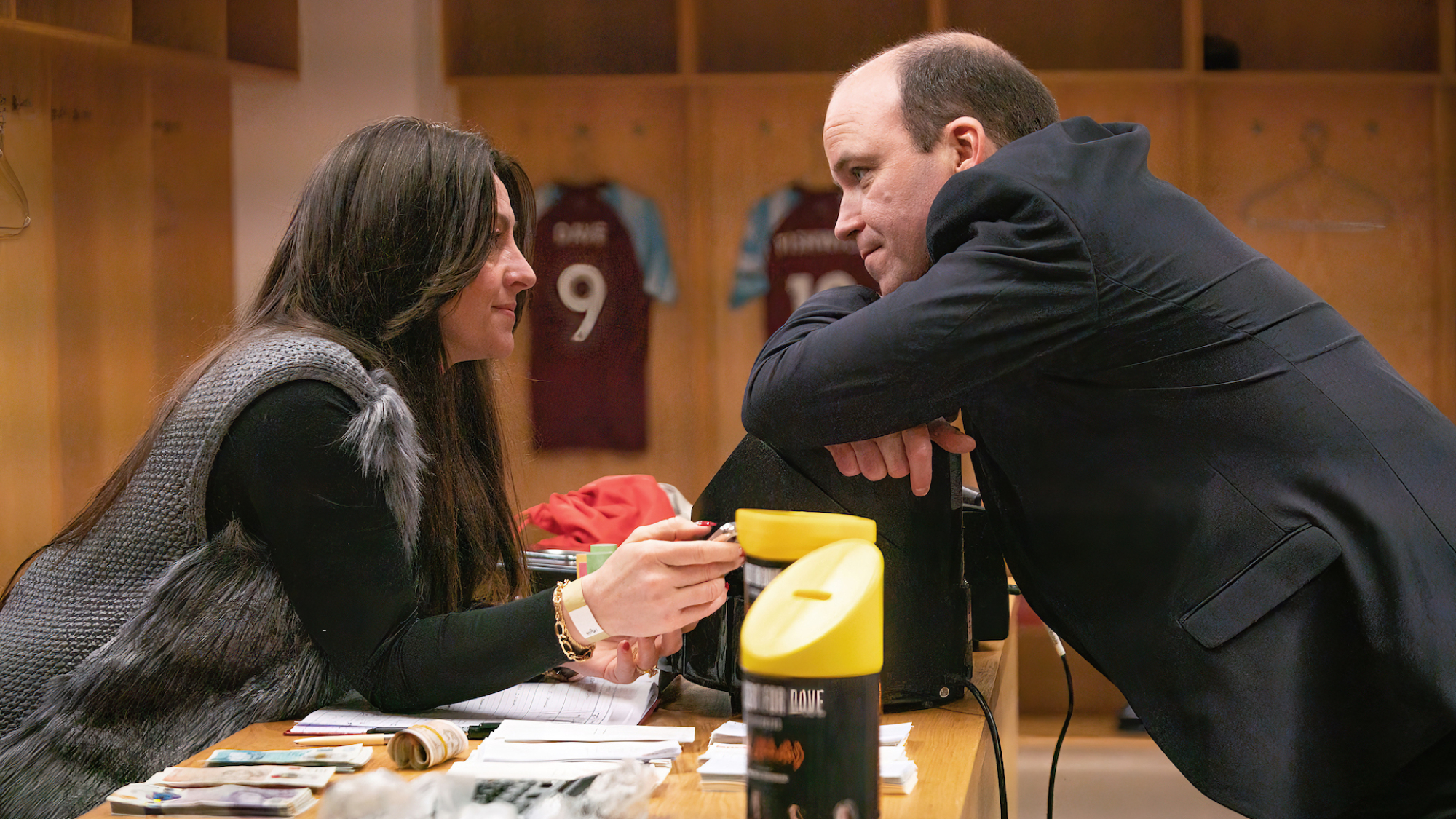 Fishwick’s plan is a new model to rival the long established framework of the banks, one that takes deposits from locals and invests them back into the community. Knowing his odds of approval, Fishwick’s goal is for the Finance Commission Board to publicly admit they’re turning down the Bank of Dave for accreditation “because I’m not in their club. I’m not part of the Eton and Oxford elite. I want them to say that the very same people who’ve just lost 500 billion quid are the only people entitled to look after our money.” The banks throw everything at Dave to try and throw him off his goal, including deliberately unattainable institutional hoops, and meanwhile, the film goes into the strings Fishwick’s friends in the community pulled to help one of their own do something to benefit everyone. 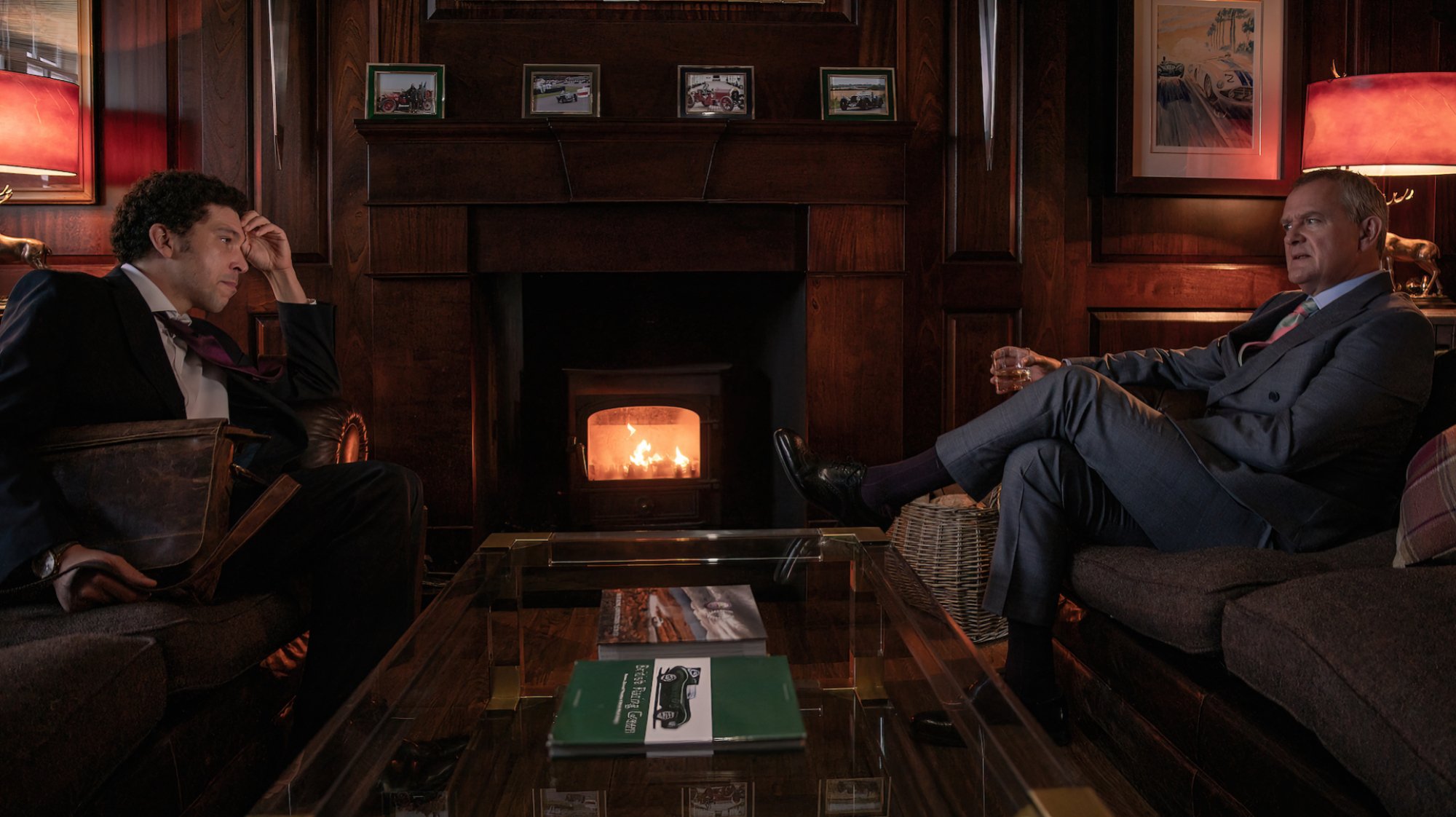 Dave isn’t the only protagonist, with Fry’s delightfully awkward character Hugh, Dave’s posh London lawyer, seeing the most significant arc. Bringing his inner city pretension with him to Burnley, Hugh is astounded at Dave’s charitable nature, genuinely wanting to improve the quality of life for the community, and he reports his findings back to his boss, Clarence. He’s played by Angus Wright as the comically cartoonish Big City Lawyer, charging “the full whack” for the firm’s services despite Fishwick’s charitable intentions. On the opposing side, the snobbish banking expert Sir Charles Denbigh (played with quiet venom by Hugh Bonneville) with “friends in high places,” throws obstacles in Dave’s way to keep money in the hands of “the right kind of chap.”

“It’s one thing rich foreign corporations trying to home in on our business, we know how to deal with those buggers,” says Bonneville’s Sir Charles. “But once…ordinary people start thinking they can get in on the act, the floodgates will open.”

As he gradually becomes immersed in Burney’s community, Hugh finds another reason to become invested in his work — yep, it’s the requisite romance storyline. But luckily, it’s an extremely polite and lovely romance. 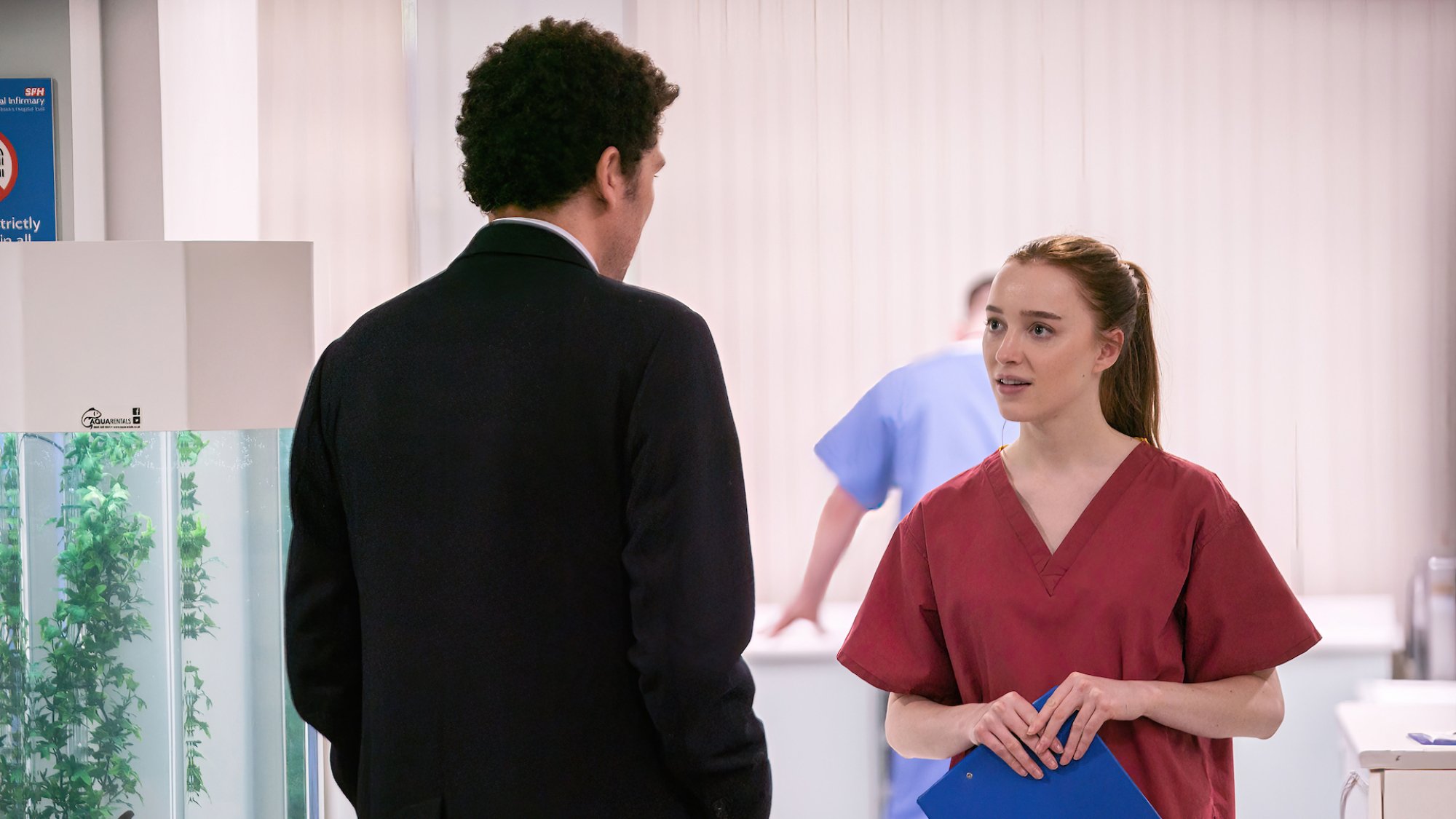 Bridgerton‘s Dyvenor takes a different, yet similarly no-bullshit role to her Regency Era heroine as Dr. Alexandra Ashforth, Burnley’s leather-jacketed doctor attempting to relieve pressure on hospitals and GPs and resolve lengthy emergency waiting times by opening a walk-in clinic, initially funded by the government’s National Health Service. Like Dave and Nicola and the other residents of Burnley, Alexandra’s character takes Hugh and the audience by the hand and leads them through the community, allowing the director to dig into other elements of Burnley beyond Dave’s business, from Alexandra’s job at the hospital to the perfect date spot at a local music venue.

Did everything in the Bank of Dave happen?

Of course, there’s some poetic license here, but the bones are real. While , Fishwick had solicitors helping him with his applications. And while , .

Sheffield rock icons Def Leppard feature in the film, though they didn’t actually host a concert in real life to raise funds to establish the Bank of Dave. But by including such an epic moment, the film feels like British feel-good music films like The Full Monty or Netflix’s recent I Used to Be Famous, wherein people use everything they have to take on the system and make something for themselves and their community, then have a big dance.

Probably the most real part of the story, Bank of Dave includes a significant amount of dry paperwork talk, which is the true battle Fishwick had on his hands, but it’s somehow delivered without sending the audience to sleep. Chats around the kitchen table, in pubs, in coffee shops are as much fuelled by the legal details as those that take place in the fictitious Bethnall and Green offices.

But beyond the details, Bank of Dave is a classic David and Goliath story, a local entrepreneur taking on the fat cats of Big Finance in order to help his community. It’s not a story of fantasy, horror, or far-flung adventure, it’s one of championing local community, and challenging a system intended to keep the rich and powerful more so, preserving their monopoly. And it’s been released right in the middle of the . Go figure.