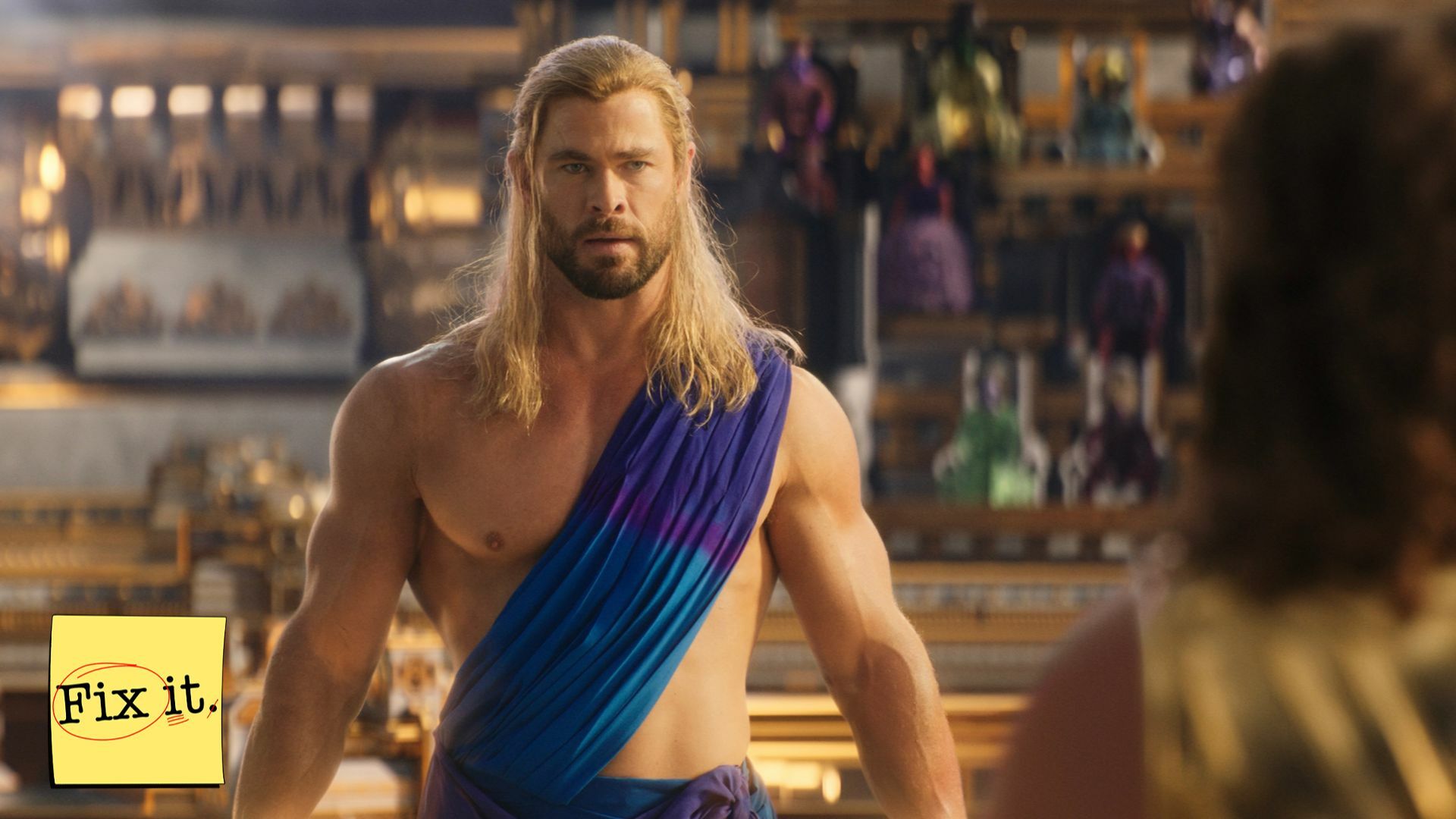 I have several issues with , but the biggest by far is the wasted potential of the Omnipotence City fight. What could have been a badass brawl was instead reduced to a run-of-the-mill action sequence, leaving me craving much, much more.

To recap: Thor (Chris Hemsworth), Jane Foster aka The Mighty Thor (Natalie Portman), King Valkyrie (Tessa Thompson), and Korg (director Taika Waititi) travel to the pantheon of all the gods in the universe, known as Omnipotence City. There, they hope to find help in their fight against Gorr the God Butcher (Christian Bale). Unfortunately, head honcho Zeus (Russell Crowe) refuses them aid, claiming that the gods Gorr has already slain were inconsequential. So Thor and Co. square off in a fight against Zeus and his guards, eventually escaping with his powerful weapon, the thunderbolt.

The entire showdown with Zeus takes place at the main stage of a massive gathering of deities. Early on in their visit to Omnipotence City, Valkyrie points out a winged Goddess of Magic and a giant eyeball, who is the God of Dreams. One of Korg’s Kronan gods, Ninny of the Nonny, also makes an appearance, as does Bao, the god of dumplings. Other include Dionysus, Minerva, “Goddess of the Dead,” “Mayan God,” “Fur God,” “Aztec God,” and “Jademurai God.”

So what were these supremely powerful gods doing while Thor and his team fought Zeus? Did they jump in and unleash their might upon the intruders? Or did they just sit by and watch the chaos unfold? If you chose “do nothing,” you would be correct!

Throughout the entire fight scene, I kept thinking to myself, “OK, surely the other gods will join in now. Maybe now? Now?” I couldn’t believe that Thor: Love and Thunder would take all that time to establish the different gods — pointing several out explicitly by name — and then not use them.

Think of all the opportunities we missed! We could have experienced a new range of godly powers. We could have seen a divine bao bun bombard Thor. We could have even watched Korg face off against his own god. How metal would that have been? Unfortunately, all we get is a battle against faceless soldiers, who don’t really come across as threats.

You may protest, “The other gods didn’t join in because they would have wiped the floor with Thor!” To which I say, “Fine by me.” A scene in which Thor and friends struggle against a horde of mightier opponents, obtain the thunderbolt, and are then forced to retreat sounds far more interesting than beating up a bunch of soldiers, killing Zeus, and then leaving while everyone stands around twiddling their thumbs.

Think of all the opportunities we missed!

A battle against the gods would also have been in keeping with the zany yet epic tone Love and Thunder tried to establish. We’re talking about all the gods in the universe here, not just human ones. Let’s get weird with it — I want to see some alien gods! This would have been a perfect opportunity for the movie’s imagination to run wild. Instead, they pulled a

We do get to see some beautiful costumes and makeup as the gods are introduced, but it’s all little more than flashy window dressing. Essentially, this sequence uses cultures as decoration without much payoff. Frankly, it’s troubling that the named gods in the credits — Minerva and Dionysus — come from the Greco-Roman pantheon, while non-Eurocentric gods are simply referred to as “Mayan god” or “Aztec god.” Thor name-drops Quetzalcoatl earlier on in the film, so we know the filmmakers have more specific knowledge of the gods. Did they just chose not to use it?

It’s possible to give Thor: Love and Thunder the benefit of the doubt and suggest that the vagueness and lack of godly action was an attempt to avoid blasphemy. That’s certainly understandable. But once again, the movie is also dealing with alien gods with no links to human culture. So, why not throw them into the fray? We’re already watching a movie about an alien god fighting an alien god-killer. What’s one (or a dozen) more alien gods among friends? Let them fight!

Thor: Love and Thunder is now in theaters.