The Gozney Dome is so much more than a pizza oven 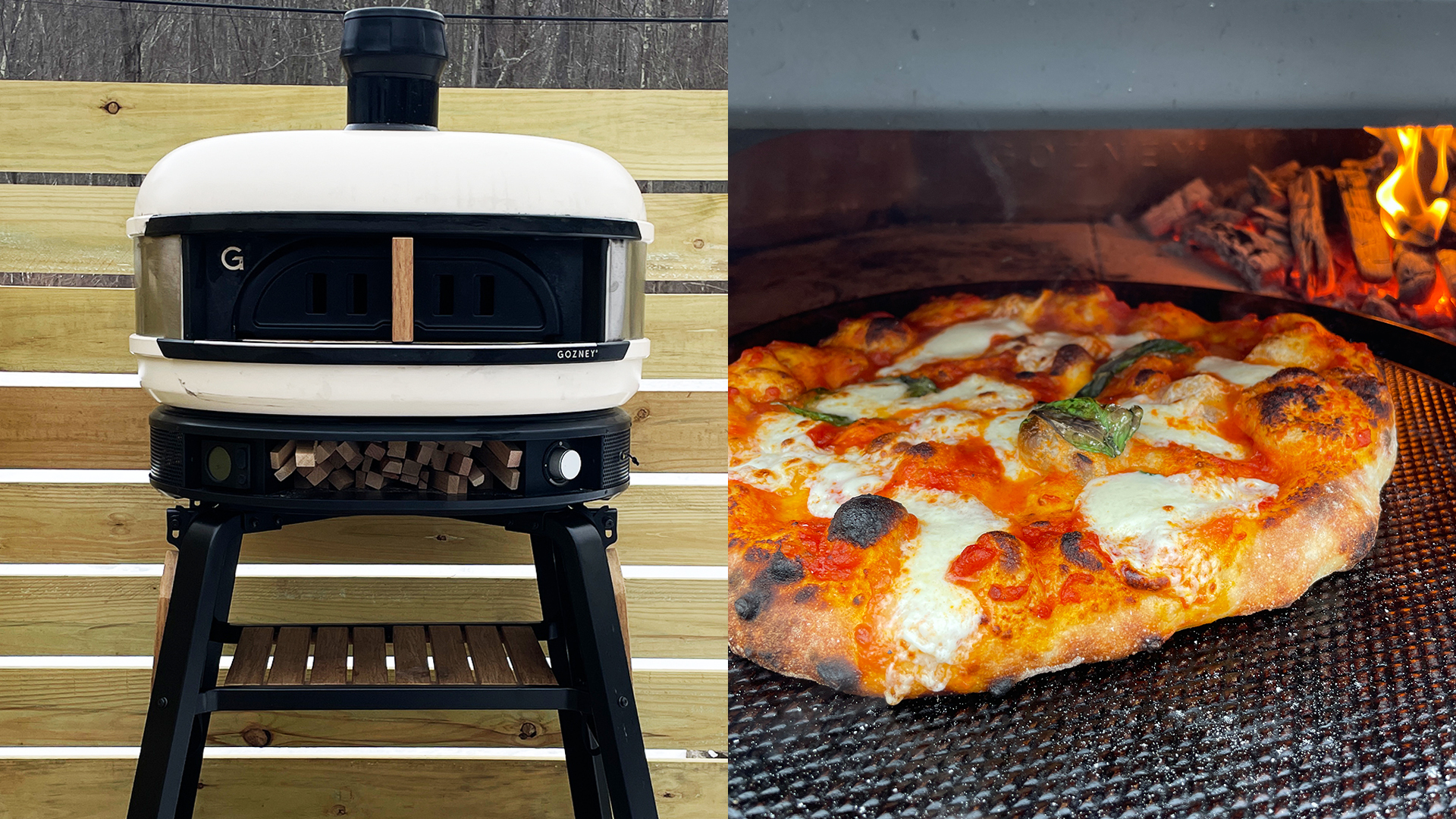 If you’re seriously interested in outdoor cooking or taking your pizza making to the next level, the Gozney Dome is a stylish yet professional-grade oven that lives up to the hype.

My first impressions of the Gozney Dome were positive. With the promise of a professional-grade cooking experience packaged neatly in a modern and stylish oven, the Dome’s sleek marketing and clean presentation give it plenty of cool factor. Plus, the Dome just looks good, with the Gozney name stamped into the metal interior and the logo visible from the front.

The unit I was sent had gas and wood cooking capabilities. You can buy a Gozney Dome that only allows for wood cooking for, but if you’re going to spend that kind of dough (pizza pun not intended) you may as well spring for the . Cooking with firewood is an amazing experience everyone passionate about cooking should try, but it also takes more time, has a steep learning curve, and can be quite finicky.

I cooked with both wood and gas, and while the meals cooked with wood tasted better thanks to the added smokiness, tending the fire took my full attention. This meant making sure I wasn’t creating a flame so large that it would escape from the front of my oven, while stoking it enough to ensure enough heat. 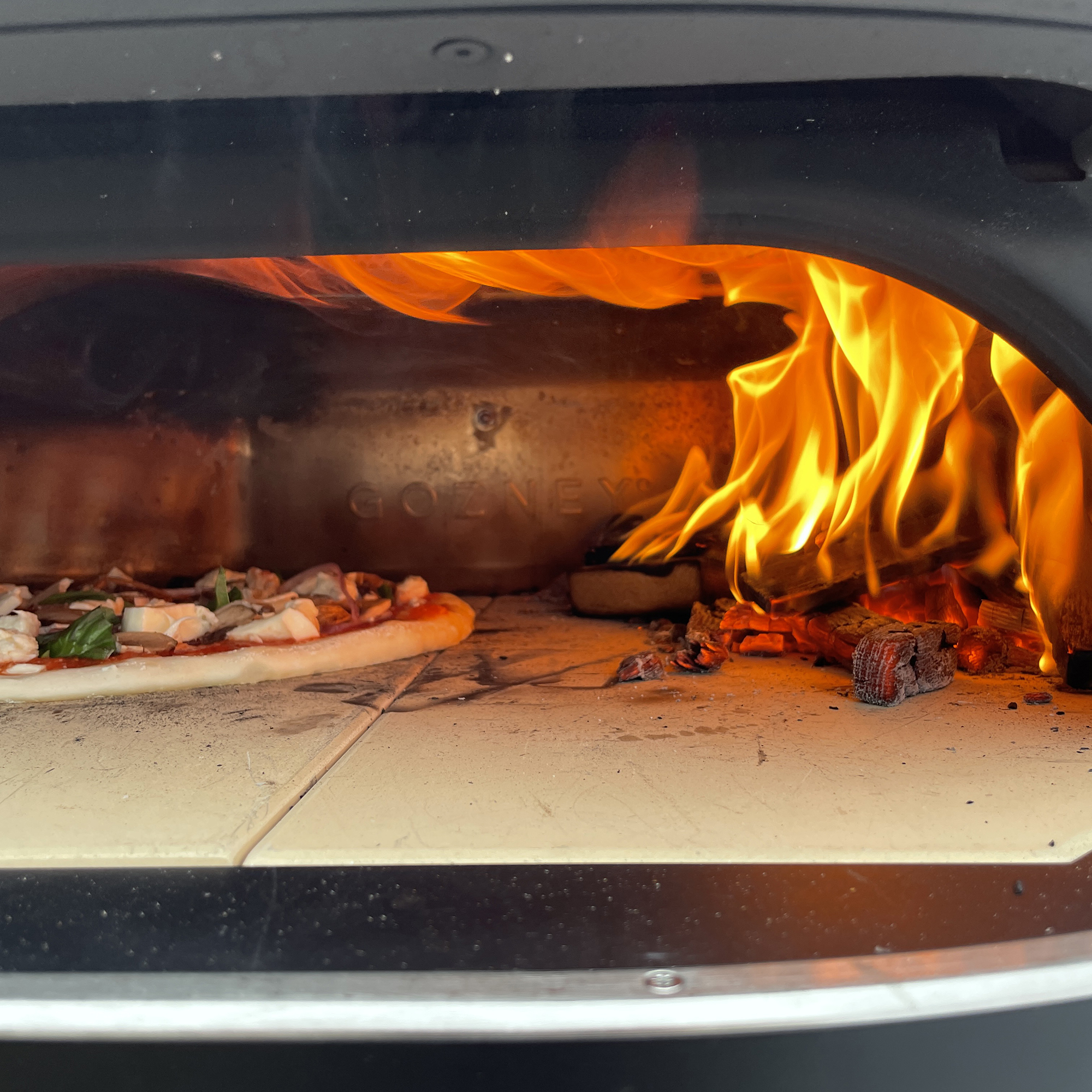 Cooking with gas is easy and still delivers while cooking with wood is more tasty and fun and somewhat of an experience. And the way it switches between the two is pretty genius. One side of the oven has a gas burner that can be covered with a stone “puck” if using wood. The opposite side of the oven has a tray that collects ashes and you move the puck depending on your heat source to open up more surface area.

Unboxing the Dome was simple — Gozney’s packing for all of its products is well-thought-out, and its instructions for set up are clearly written, and accompanied by IKEA-style images. For the Dome itself, the only major pain is lifting it up and putting it on the surface you’d like to cook. The thing is pretty heavy, but the oven included handles so that two (strong) people can easily place it on a surface , which will run you an extra $299. The Dome is extremely well insulated though, so you don’t need the stand if you have a safe outdoor countertop. I found the Dome Stand useful but mediocre; my wing tables weren’t quite level, making them sort of useless.

The only other set up for the Dome itself is popping some supplied batteries into the built-in thermometer unit and another into the igniter for the pilot light. I found the screw on the back of the thermometer to be annoyingly small and I nearly stripped it. To insert the battery into the igniter you have to remove a small panel on the back of the oven which had some odd-shaped screws. My house has a decent collection of tools, and I struggled to find something that would work, but I eventually got the battery in and used my hands to screw the panel cover back in place.

Aside from the small screw issues, setup was a breeze.

Cooking pizza with the Gozney Dome

Let me be very clear: I had a blast cooking with the Gozney Dome. It’s just a very fun piece of cookware, in a world of increasingly “fun” and weird cooking trends.

The initial appeal of the Gozney Dome is its promise to reach blazing hot temperatures upwards of 950 degrees Fahrenheit. For serious pizza cooks, high temperatures are essential and something a normal oven just can’t achieve. This is a big reason you’re seeing a boom in residential pizza ovens over the last few years; as interest in making pizza at home has spiked, sales of the tools needed to achieve that have also seen a boom. 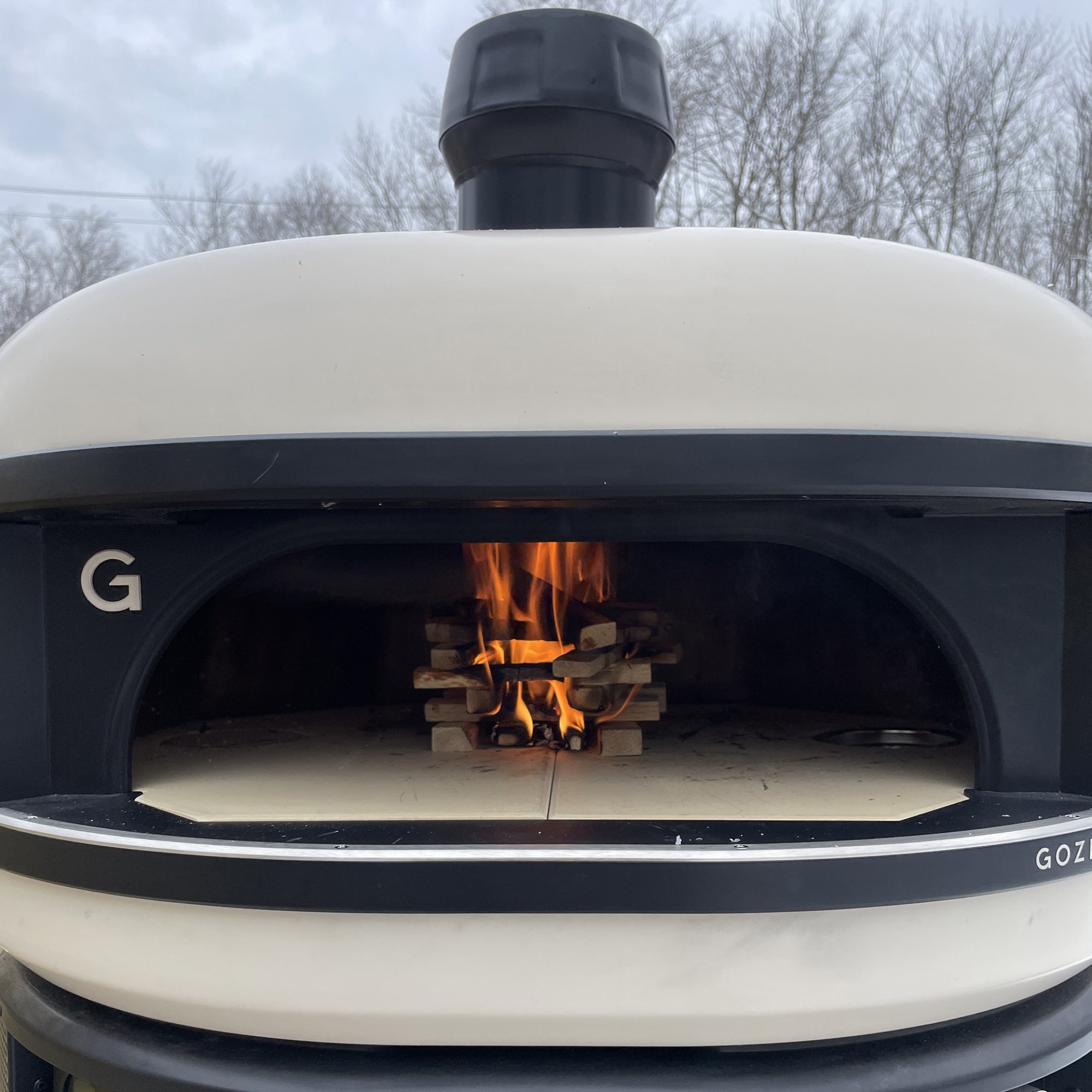 The Dome can absolutely deliver those temps given the right circumstances. With wood it takes some trial and error. With gas it’s a bit easier — just crank it and allow the oven time to become fully heated. This can take some time too, depending on conditions. I live in the Northeast and tested the Dome during the cold month of February. On my first night with the Dome cooking with gas I struggled to get past 600 degrees while the outside air was well below freezing with strong winds. I ended up turning the oven so that the front opening was shielded better, and the Dome’s temperature finally pushed pass 850 degrees where I felt more comfortable cooking.

It’s those small variables that make the Dome both a pain and a joy. It’s harder than plopping your pizza in the oven, going on your phone for 15 minutes, and then checking back in when it’s done, but the meal and the added cooking knowledge are your rewards.

The design of the Dome allows for a flame that rolls over the top of the oven and licks the food with extreme heat whether you use gas or wood, which is exactly what you want. With wood this means that you need to pay close attention and feed your small fire at the appropriate time depending on what you’re cooking. It’s a balance of getting the oven up to the right temperature, but also ensuring you have enough — but not too much — flame to cook the top of your food.

Controlling the flame with gas is a bit easier. The gas control knob is very straightforward, and if things get too hot, simply shut the gas off. 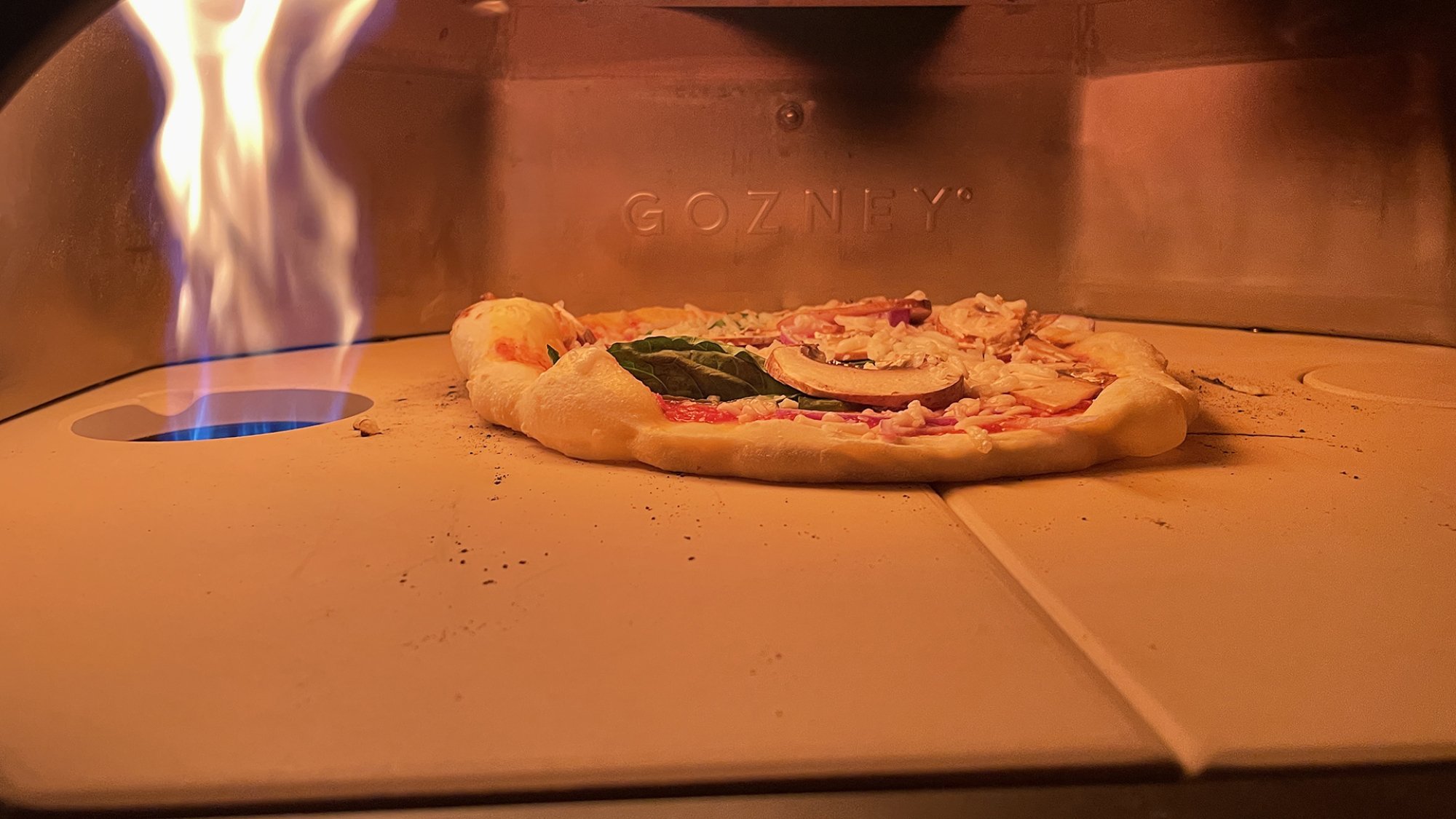 One note here: The Gozney Dome is a premier single pizza oven. You may be able to squeeze in two smaller 12-inch pizzas, but it’ll be tight. You can cook larger pizzas in the Dome than, say, the , and the added space allows you more control over your pizza. Its easier to turn, and if things get too hot, you have more space to put some distance between your food and the flame.

The Dome is so well insulated, it was annoying, which I suppose is a good thing. Even in below freezing temps I had to wait hours before the thing cooled down enough in order for me to put the cover on. That’s part of why cooking with the Dome is sort of a commitment. There’s a lot of prep time, and while cleanup is a breeze, cool down takes forever.

Cooking other food with the Gozney Dome

Aside from pizza I also had the opportunity to cook a ribeye steak, salmon, and bread in the Gozney Dome. Each presents its own challenges, but again, cooking with the Dome for me was an enjoyable experience. 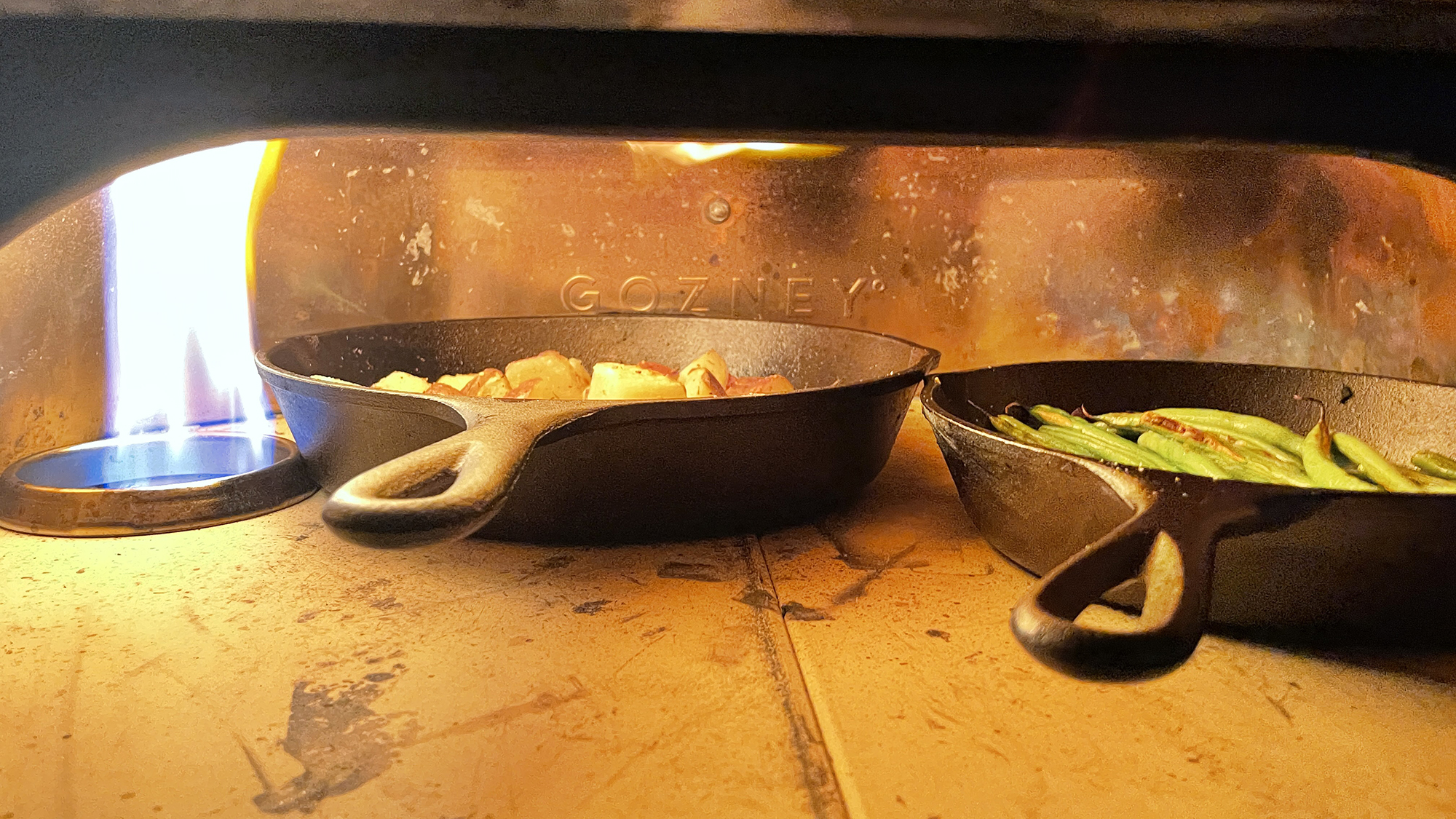 The steak was pretty simple. I cranked the heat and threw a cast iron skillet inside. I also blanched some green beans and parcooked potatoes that were later roasted as I rested my ribeye. Everything came out great, and I would absolutely cook this meal again. One note though, when you’re working at temperatures above 700 degrees things cook quick. You don’t need to remind yourself that the Gozney Dome is hot — the Dome reminds you. The heat emanating from the front of the oven is a constant reminder that just a few seconds can turn a perfectly cooked medium-rare steak into a disappointment. Prep is key here. Running back into the house to grab something can ruin a meal. 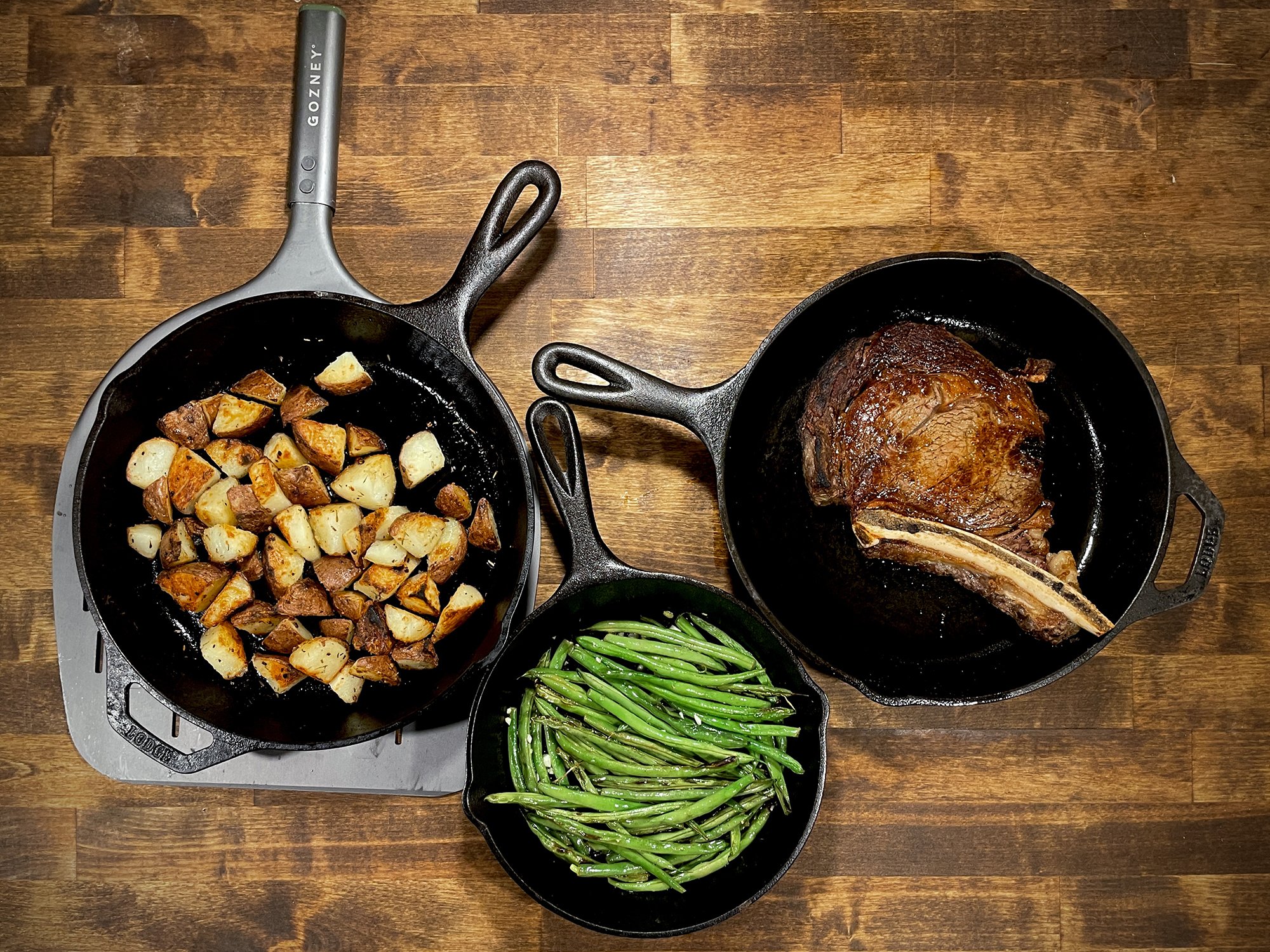 The salmon, from a Gozney recipe that called for it to be roasted on a cedar plank that had been soaked in water, was also great. Overall the recipe was pretty easy to follow, and left me with a really good fish dish. I’m not a huge fan of salmon, but again, the ability with an open flame on a cedar plank just opened up more possibilities I didn’t have before, and it really got me excited about cooking. 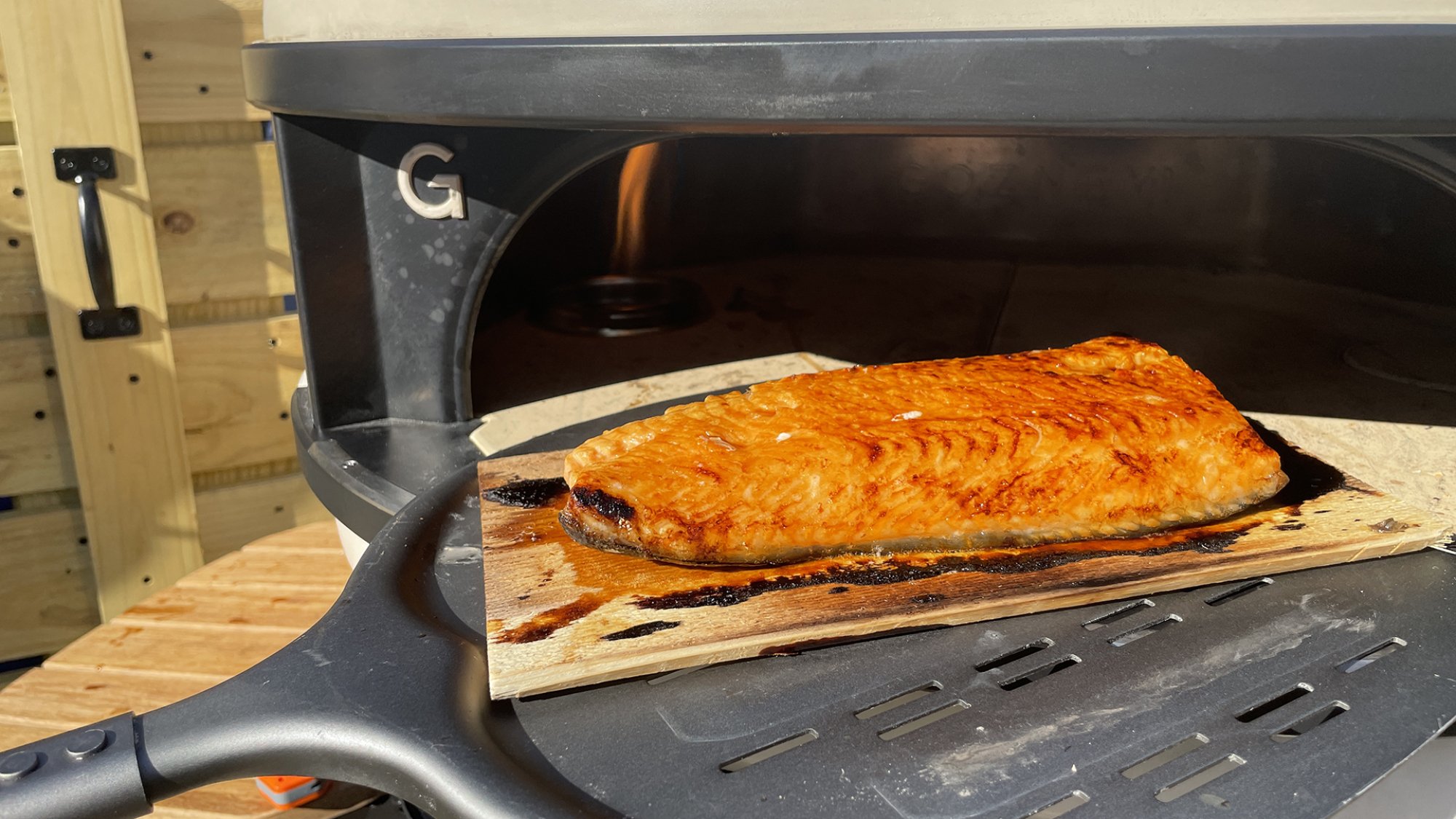 Finally, I baked some bread with wood in the Gozney Dome by utilizing the rope door and steam injector accessories. Bakers use a variety of different methods to add steam to their bread in order to allow for proper oven-spring. “Steam is vital during the oven-spring period so that the surface of the loaf remains moist and expands easily.” With the Dome, this was as simple as adding about half cup of water to the steam injector and letting it do its thing. The water slowly drips into a pan in the oven, allowing for a moist atmosphere for the bread to expand. 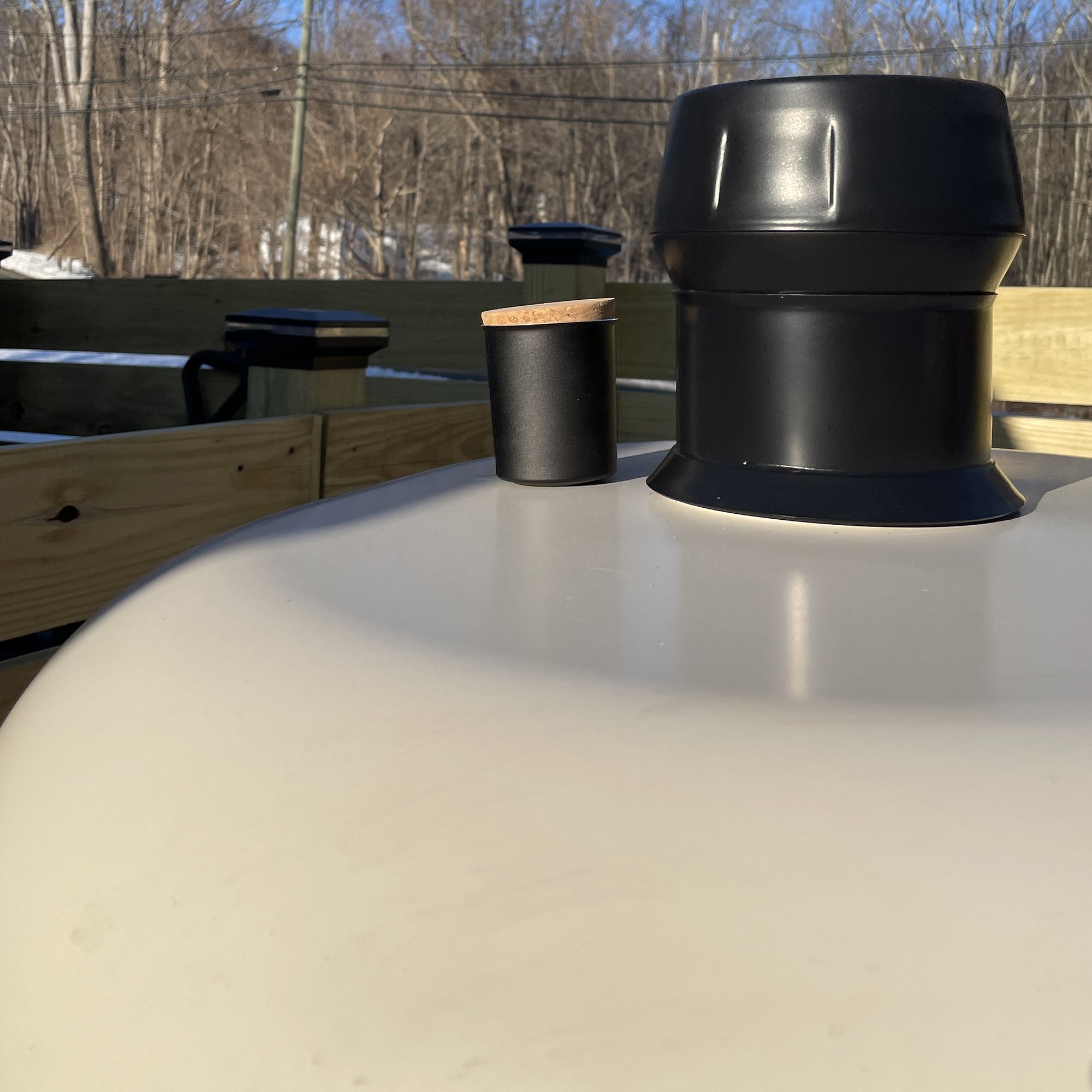 Baking the bread right comes down to trial and error, and given a few more attempts I know I can make a great loaf in the Dome. I made a crucial mistake though, and overcrowded the oven. I added two loaves instead of just one, and left the breads in a bit too long. I should have checked on them a bit earlier than I did and turned them once, allowing for a more even bake.

Regardless, the bread I made tasted great — it just wasn’t a looker. 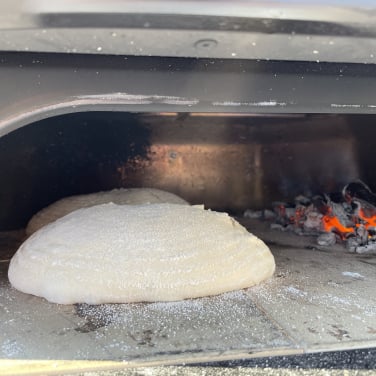 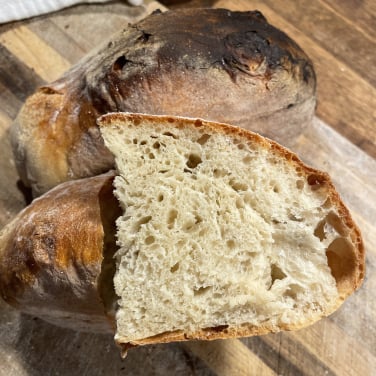 I was offered a number of accessories to test out in use with the Dome, and I’ll add a brief note about each one because some of them are essential.

The Dome delivered on its hype and expectations. There are bigger ovens out there, () and smaller ovens like one from and Gozney Roccbox that can fill some of the same needs. But the bottom line is that the Gozney Dome is a versatile, premium outdoor oven that allows the user to manipulate the cooking environment to achieve the best results. Whether that’s slow-roasting pork with coals from a wood fire or cranking the gas to quickly churn out pizzas for a party, the Dome allows for a number of different cooking styles, and has the insulation of a professional Neapolitan oven.

I spoke briefly to the company’s founder, Tom Gozney, about the Dome which is clearly a project the company is really proud of. Gozney started in commercial ovens before shifting gears and offering residential ovens as well. Tom said that the Dome is “an expression of leveraging all of our commercial and professional level expertise and shrinking that down into a unit that functions brilliantly, like a large commercial oven.”

“It’s like Apple and a historic Neapolitan oven came together and had a child and that was the Gozney Dome,” Tom said.

I think Gozney achieved that.