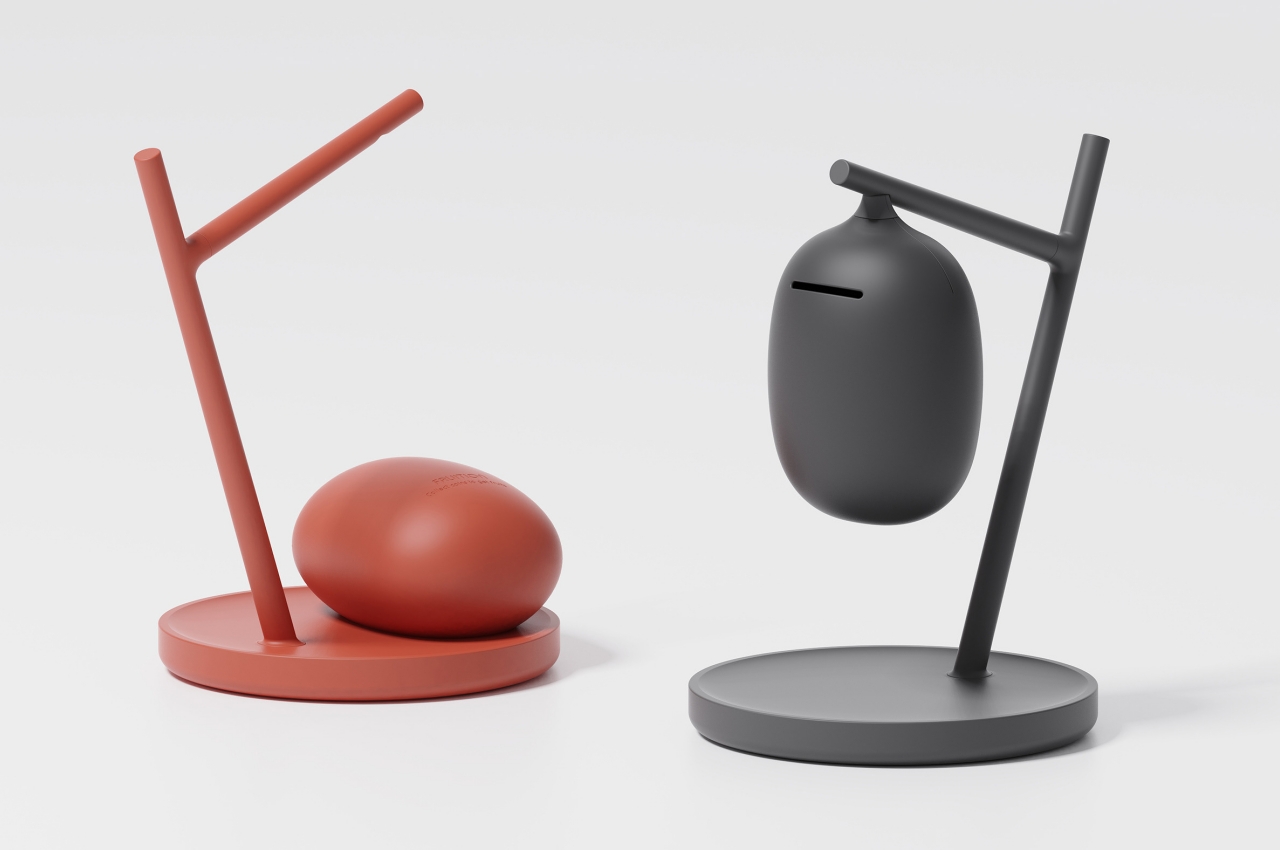 There is something about saving money that seems to trip up even some of the most disciplined people. Throughout the centuries, there have been many strategies and tools designed to motivate people to save their hard-earned money or at the very least prevent them from using it up. Even the venerable piggy bank was made to make it difficult to take out what you put in. However, it creates a negative mentality of a hindrance rather than a positive attitude of anticipation. A simple twist on the coin bank concept could have a more positive psychological effect, like the excited anticipation of a favorite fruit ripening and finally falling from the tree at the right time. 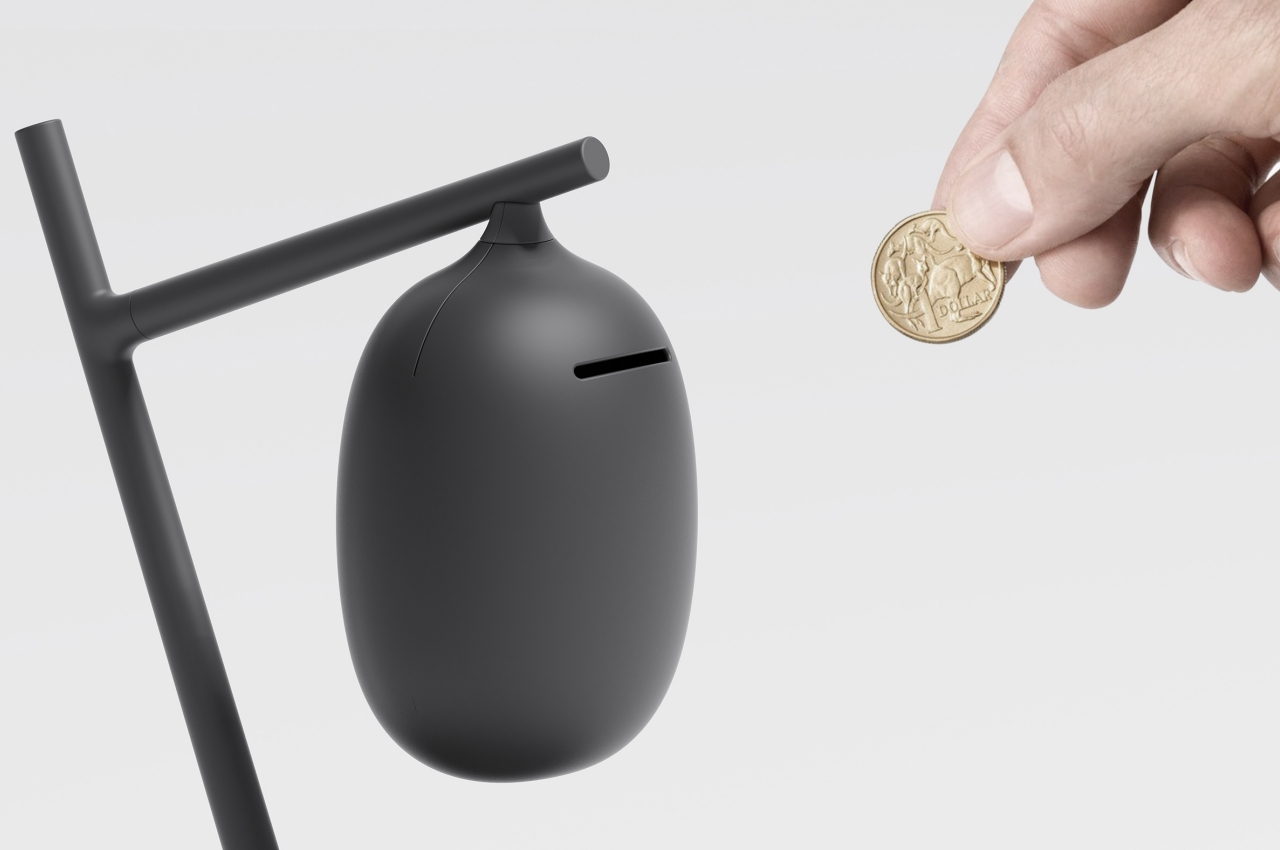 Almost anything can be a receptacle for coins you want to save for a rainy day. A traditional piggy bank can definitely do the job but also doesn’t carry enough impact to make the activity worthwhile. You could also just use sheer willpower to save up money, but we all know how weak the human spirit can be without some motivation or psychological assistance, at the very least. 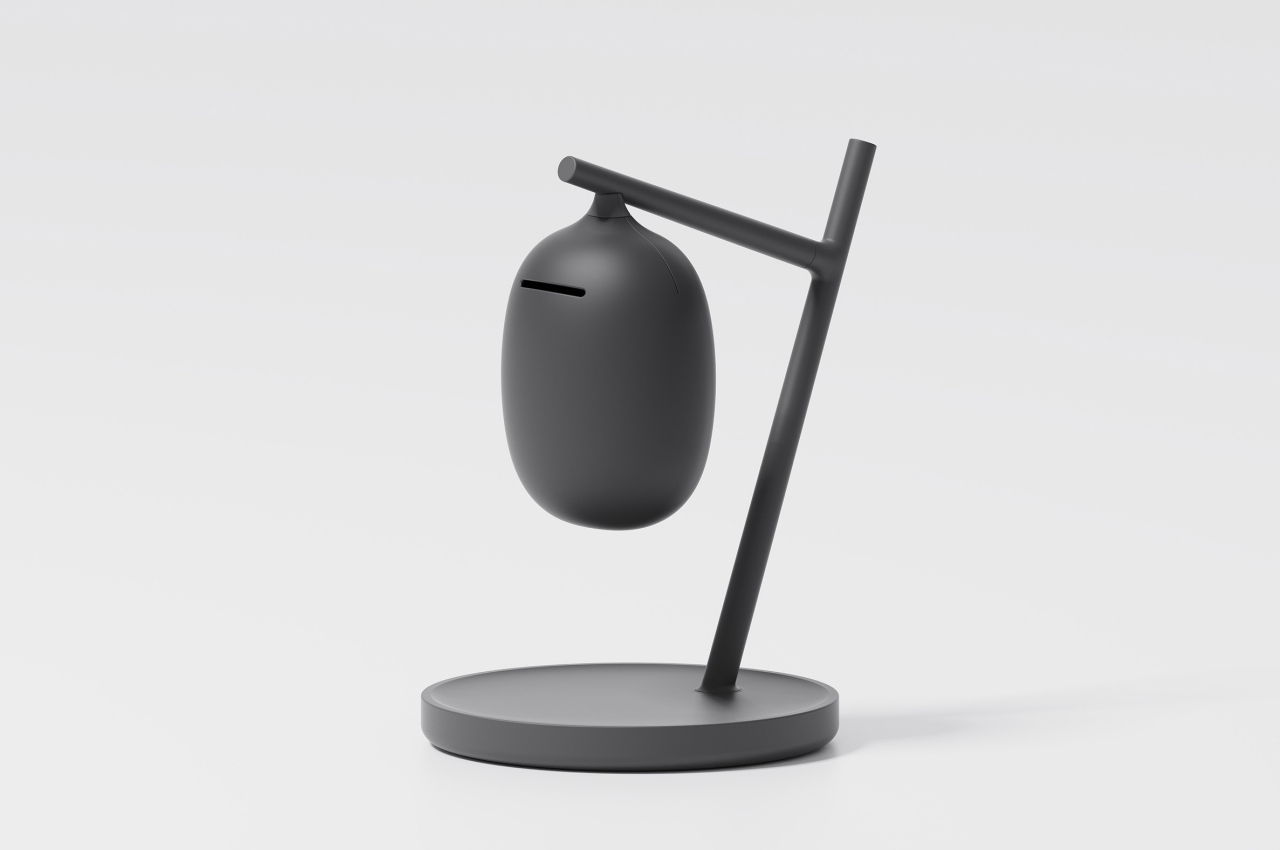 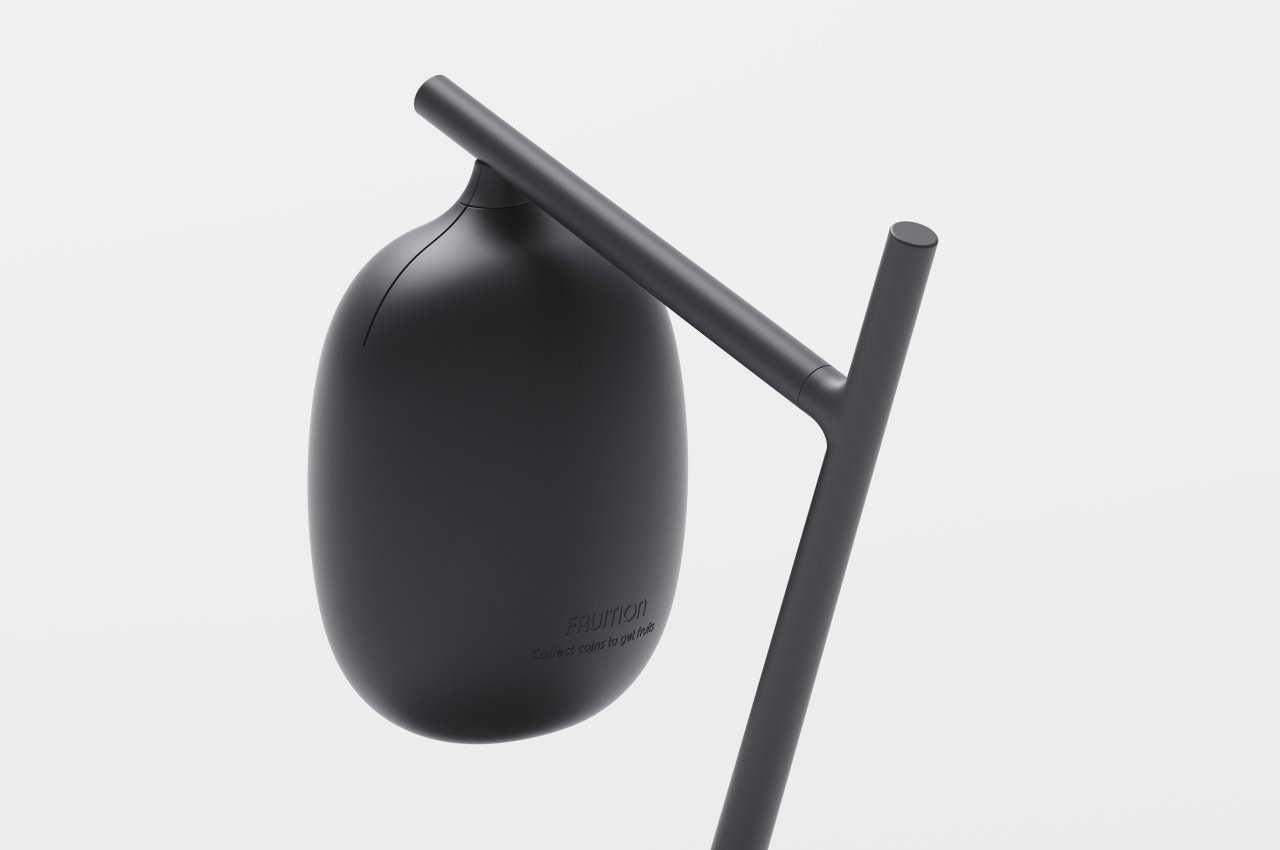 Fruition is a coin bank that uses semiotics or signs and symbols to convey the idea and feelings related to patiently waiting for the fruit to grow. The interpretation is almost both literal and metaphorical, with the silicone bag holding the coins that will bear the fruit of saving up. And when the fruit is ripe or, in this case, full, it simply drops, ready to be harvested. 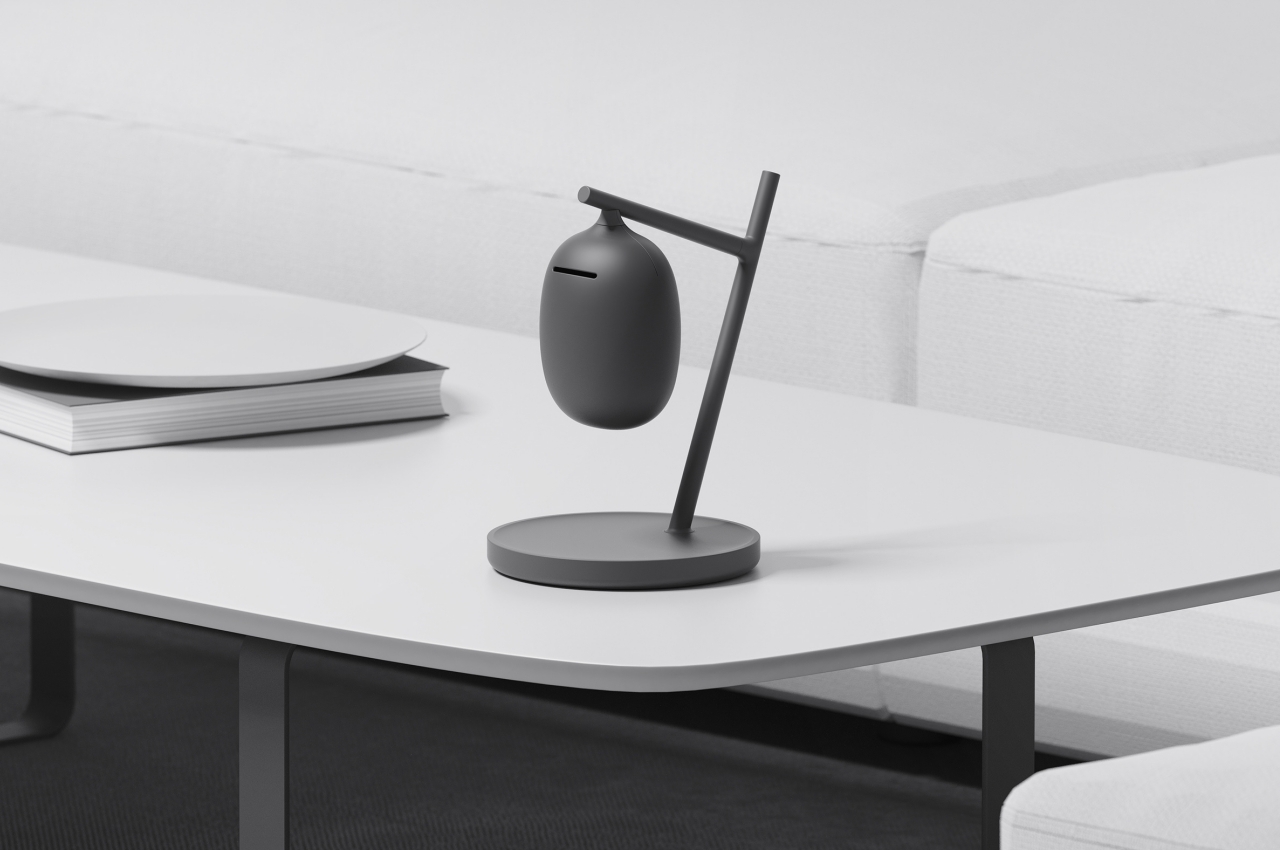 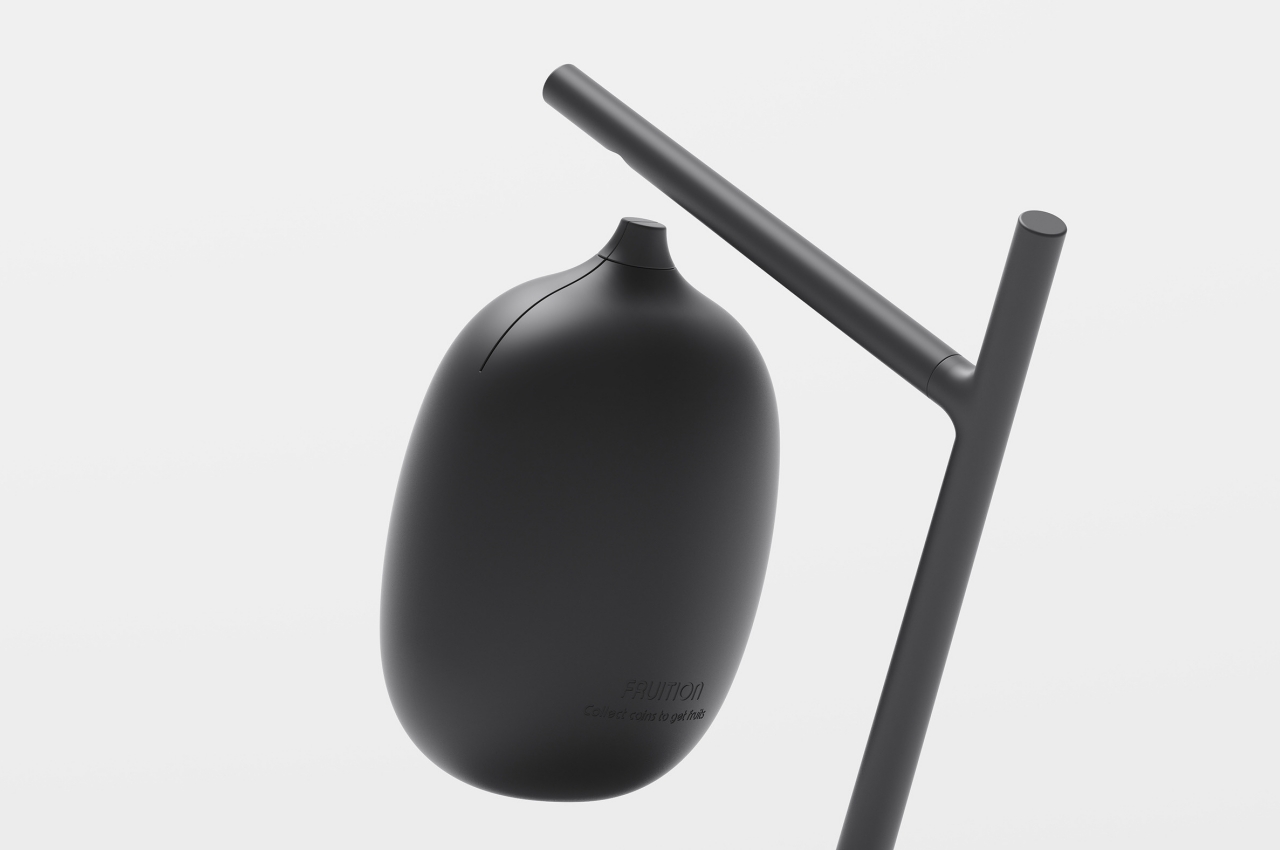 In this case, the money bag is magnetically attached to a metal stand that represents the money tree’s stem. The tray, in addition to catching the fruit, can also be used to put other things like clips and small objects. One might want to avoid putting too much there, though, because those objects will most likely bounce and be thrown out of the tray when the fruit falls. 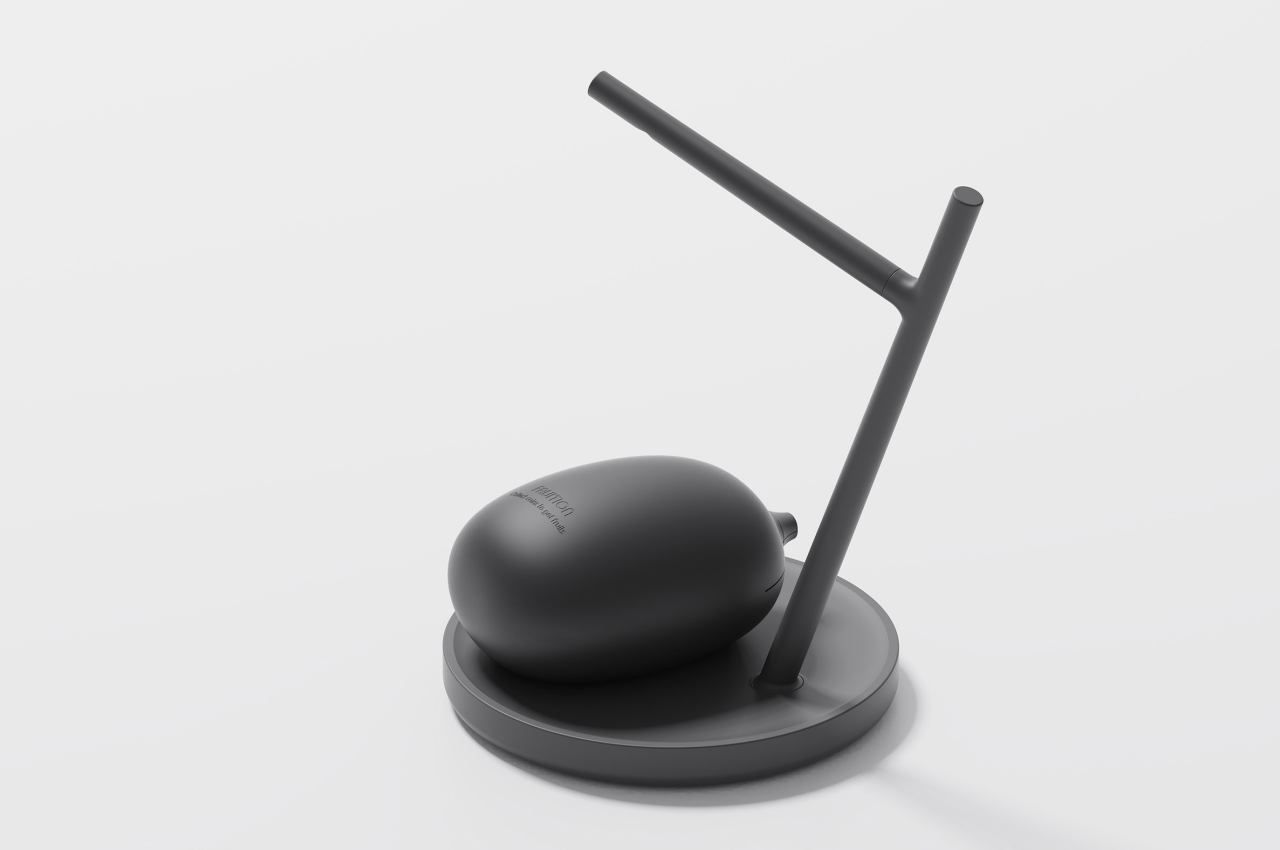 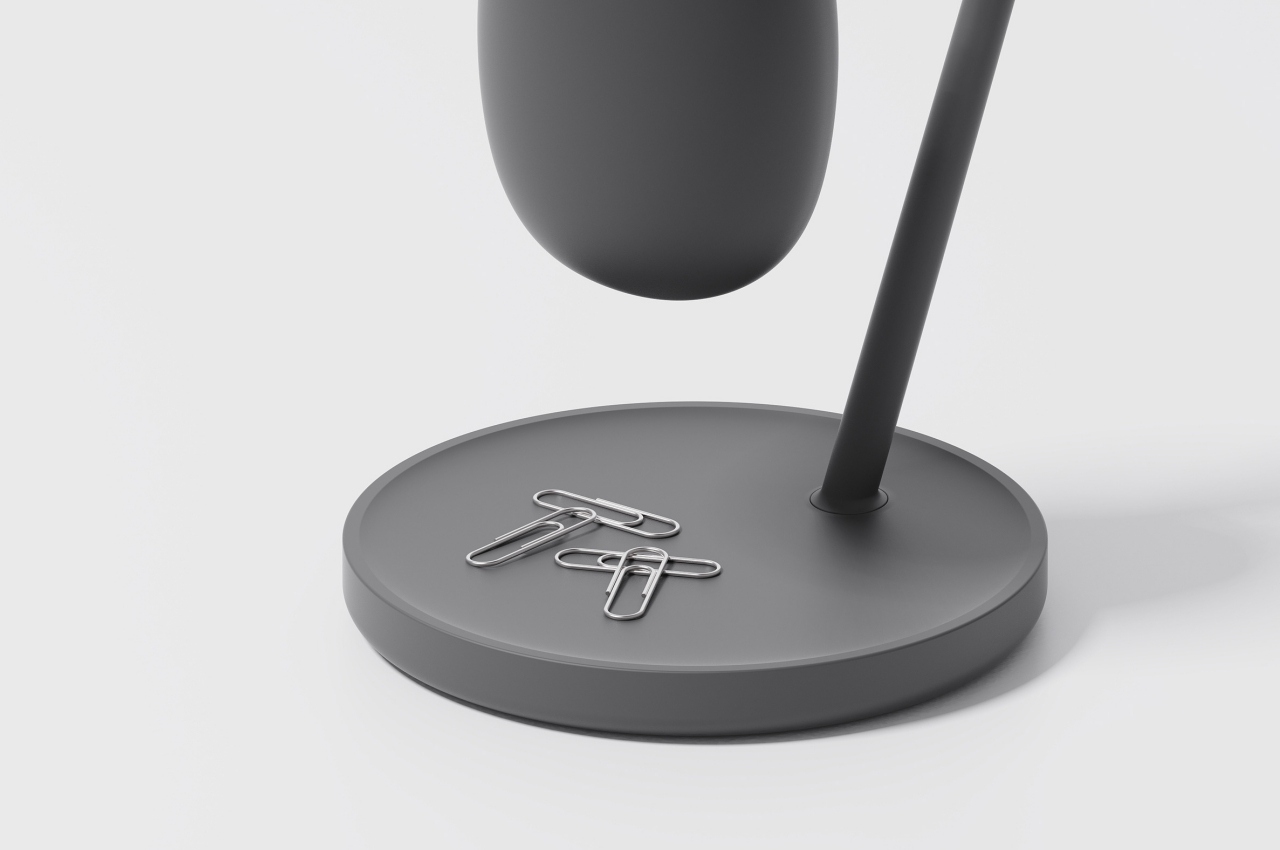 Almost like many coin purses, the fruit is made of silicone and held close with magnets. In truth, it doesn’t hinder anyone from plucking the bag off its branch and taking out coins. Instead, Fruition uses positive reinforcement to get people to do the right thing rather than simply challenging them with a negative block. 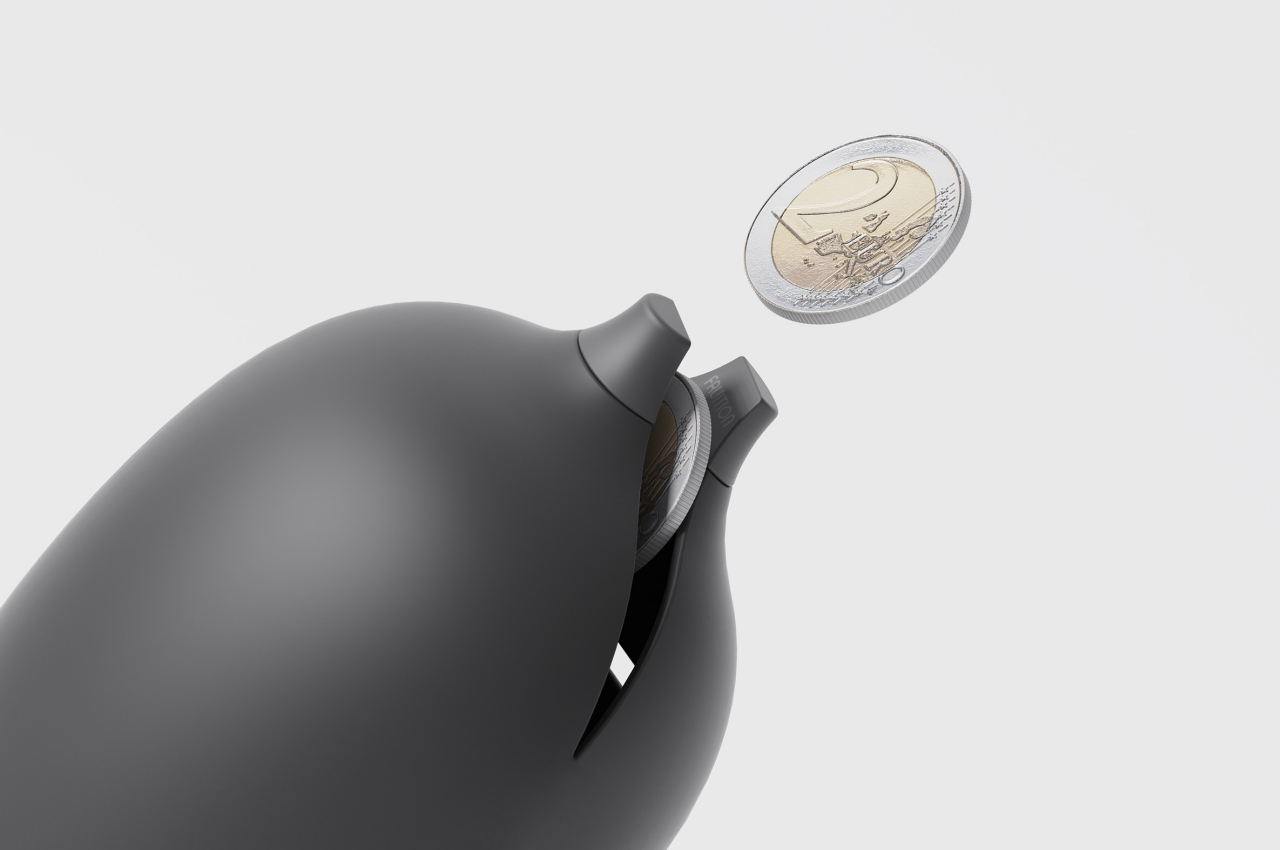 Fruition is a simple metaphor, one that is a perfect match to an activity that requires patience and perseverance to really reap the benefits. The coin bank’s simple design also requires fewer wasted resources and can perhaps even be made from more sustainable materials. And at the end of the harvest, you can even use it as a coin purse in your bag and just plant another “seed” to fill up with your hard-earned money. 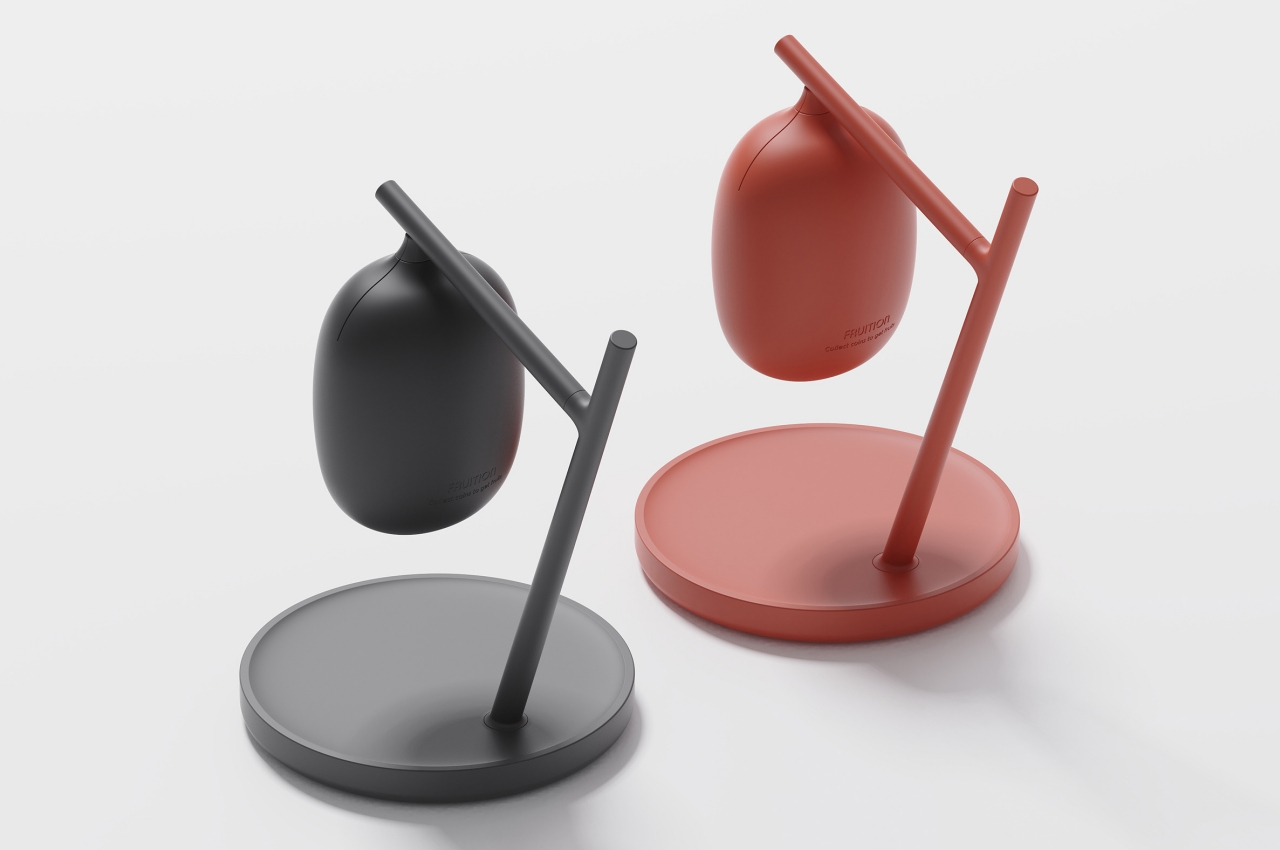 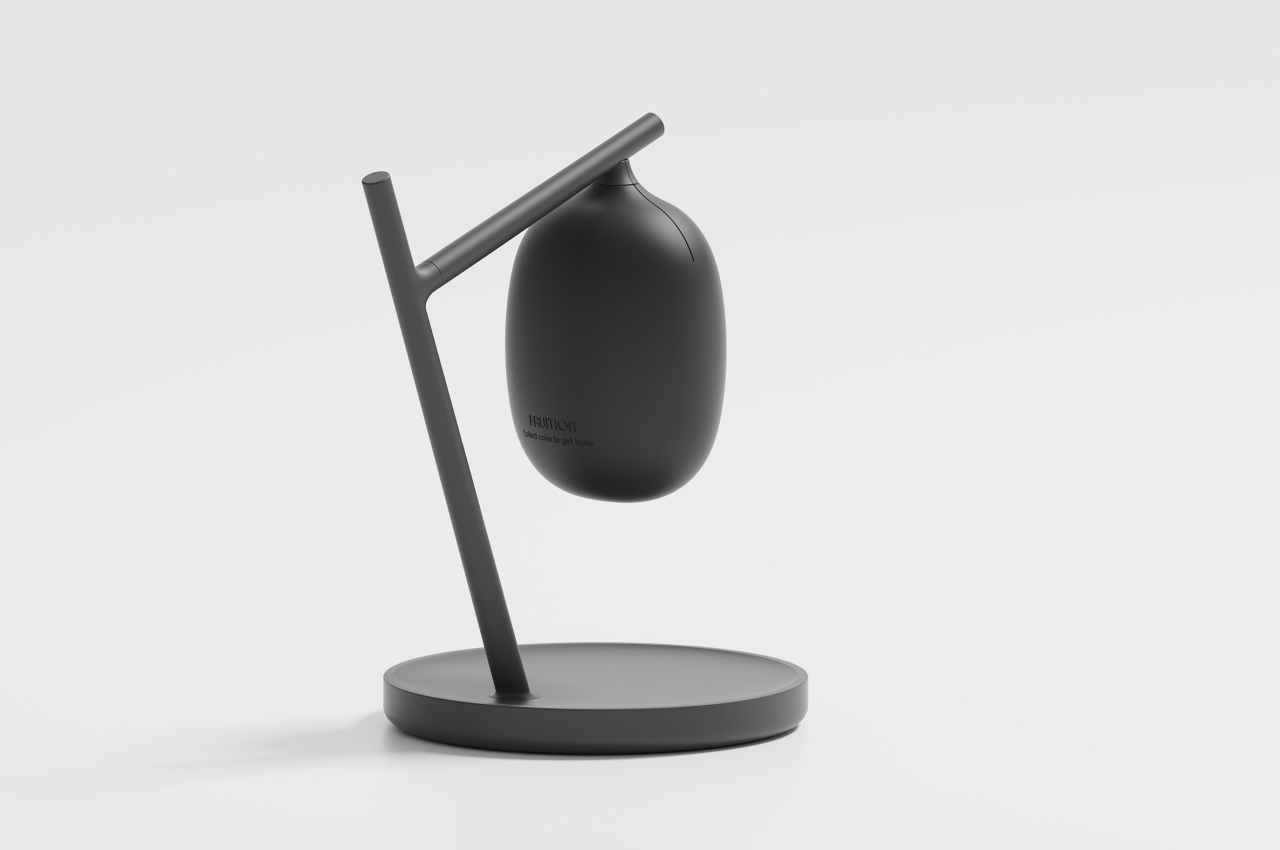