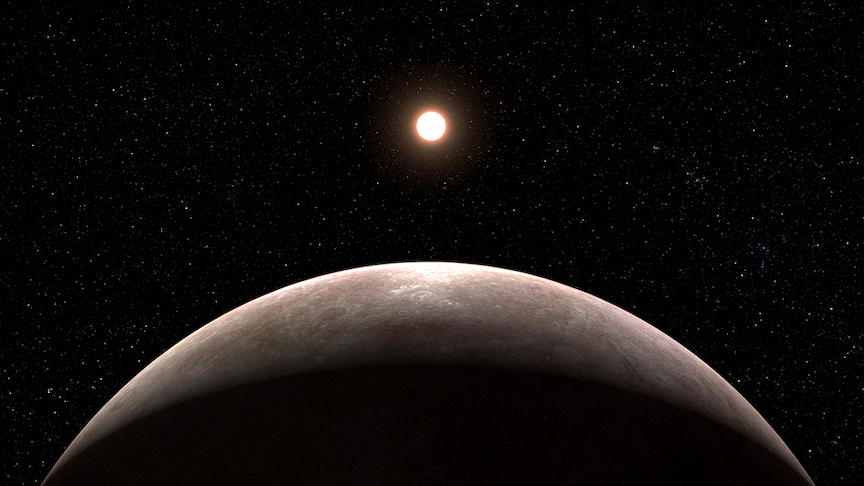 It’s almost exactly the size of . It’s rocky. It’s relatively close (41 light-years away). And, for the first time, astronomers used the most powerful space telescope ever built — the — to find this , which is a planet beyond our solar system. It’s called LHS 475 b.

“Webb is bringing us closer and closer to a new understanding of Earth-like worlds outside our solar system, and the mission is only just getting started,” Mark Clampin, the director of ‘s Astrophysics Division, .

There are mysterious “super-Earths” all over the galaxy

The planet, however, differs from Earth in some major ways. LHS 475 b whips around its small star every two days, which is an extremely close orbit. But the star, called a “red dwarf,” is half the size of the sun, so it’s cooler. In sum, this world is a “few hundred degrees warmer than Earth,” NASA noted.

“With this telescope, rocky exoplanets are the new frontier.”

Importantly, LHS 475 b may still have an atmosphere. But confirming what exactly it’s composed of will require repointing Webb at this planet and capturing more detailed information, which is scheduled to happen later this year. “The observatory’s data are beautiful,” Erin May, an astrophysicist at the Johns Hopkins University Applied Physics Laboratory, . “The telescope is so sensitive that it can easily detect a range of molecules, but we can’t yet make any definitive conclusions about the planet’s atmosphere.” The , with a mirror over 21-feet across, is designed to that ever formed, billions of years ago. But it’s also equipped with special instruments, called spectrographs, that can detect what’s in an exoplanet’s skies. how we can peer into far-off worlds:

Astronomers wait for planets to travel in front of their bright stars. This starlight passes through the exoplanet’s atmosphere, then through space, and ultimately into instruments called spectrographs aboard the Webb telescope (a strategy called “transit spectroscopy”). They’re essentially hi-tech prisms, which separate the light into a rainbow of colors. Here’s the big trick: Certain molecules, like water, in the atmosphere absorb specific types, or colors, of light. Each molecule has a specific diet. So if that color doesn’t show up in the spectrum of colors observed by a Webb spectrograph, that means it got absorbed by (or “consumed” by) the exoplanet’s atmosphere. In other words, that element is present in that planet’s skies.

There isn’t another operational telescope around today that can sleuth out what lies in the atmosphere of an Earth-sized planet. Earth is relatively small. That’s why are easier to detect and analyze. Want more and tech news delivered straight to your inbox? Sign up for today.

It’s likely that Webb will detect and analyze other Earth-sized, rocky worlds. “These first observational results from an Earth-size, rocky planet open the door to many future possibilities for studying rocky planet atmospheres with Webb,” NASA’s Clampin said.

Some of , a temperate region where liquid water can exist on the surface. Webb can help reveal what they’re really like.

“With this telescope, rocky exoplanets are the new frontier,” Johns Hopkins astronomer Kevin Stevenson also shared in a statement.