Get Kid Cudi or Jaden Smith alone and you’ll get a truly nuts outfit — think and . Get them together and the results are sure to be borderline outrageous.

That’s exactly the case for September 20, when the pair were spotted hanging out after Kid Cudi grabbed dinner with Jaden Smith and his girlfriend Sab Zada.

Smith had just hosted an impromptu fan meet-up to commemorate the launch of a varsity-themed collection from his MSFTSrep clothing brand and was still dressed in the insane get-up that he’d worn on-stage: rainbow gradient hooded jacket, giant denim cargo pants, New Balance 550s, and some sort of floral headpiece that slipped down around his neck.

It’s quite a get-up, even looking beyond the funky flower thing. But theatrics are a Jaden Smith signature so it checks out.

No Louis Vuitton, surprisingly — Jaden Smith has to LV womenswear designer Nicolas Ghesquière for several years now — but the flashy jacket, ornamental and enormous jeans affect a similar air to the personal style of Virgil Abloh, with whom Smith was quite close.

Certainly, if this was only about what Jaden Smith wore, we’d have plenty to talk about, but we haven’t even touched on the wild look worn by Kid Cudi. Think he can’t top Smith’s vivacious layering? Think again.

If there was ever an outfit that singlehandedly obliterated the term “subtlety,” you may very well be looking at it.

I mean, hey, at least it’s not boring. So often we see wealthy celebs using their deep pockets to purchase only the most bland luxury garments, yielding outfits hardly worth a mention.

Fresh from the recent Moon Man’s Landing festival held in his hometown of Cleveland, Kid Cudi is keeping busy.

The festival itself was a sprawling affair, inviting everyone from Playboi Carti and Pusha T to Haim and Bone Thugs-N-Harmony to hit the stage on September 17. Jaden Smith, known simply by his stage name Jaden, also performed

Meanwhile, Kid Cudi’s , Entergalactic, premieres at the end of September and the rapper has reportedly got a new album of the same name lined up to coincide with the show.

The title is taken from a fan-favorite track off of Cudi’s debut album, Man on the Moon, and has inspired a variety of and activations.

Apparently, it’s also inspired some truly avant-garde outfits from both Cudi and his pal Jaden. 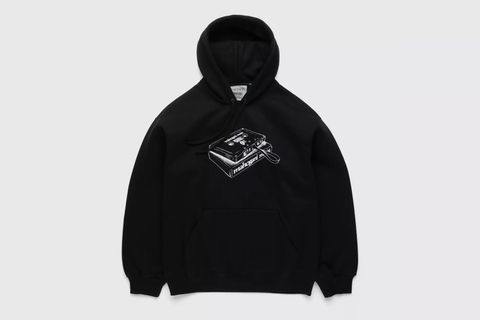