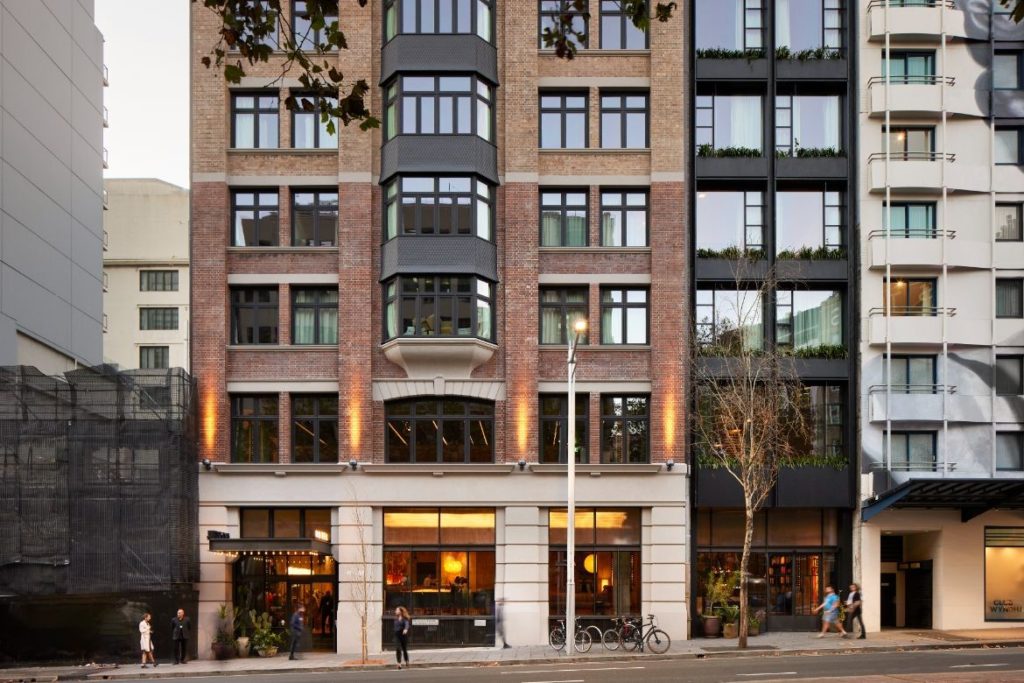 Seamlessly integrating a refurbished warehouse facade and a modern glazed tower in Surry Hills, Ace Hotel Sydney champions the site’s rich history and brings new lifestyle-driven accommodation to the heart of the city.

The restoration of the historic Tyne House and nine-storey addition was the winner of a City of Sydney design excellence competition. The hotel within the heritage building was developed by Golden Age Group and project managed by Time & Place.

Emerging seamlessly from the site’s warehouse building, the Chicago-style decorative details became the driving influence behind the honest expression of the hotel’s structure and room configuration.
Originally constructed as a brick factory in 1915 for W.H. Soul Pattinson & Co. Ltd, Tyne House is a 10-storey Federation warehouse that references the early skyscrapers of the 1860s. With its steel frame, masonry cladding and early use of concrete, the structure was the first high-rise contribution to the warehouse precinct of Wentworth Avenue.

Maintaining the largely intact original glazed and brick facade was an integral design element because of its historical significance. The internal structure was fully reconstructed, restoring the mouldings, cornices and metal work to their original condition, as well as integrating an addition to house the hotel.

A sympathetically integrated glass-and-steel-framed tower celebrates the city’s historic grit and draws on the Tyne building beneath, while its terracotta-clad frame references the masonry character of the surrounding context and offers a modern interpretation of the warehouse vernacular.

The tower facade is defined by an expressed frame that draws on the heritage of the existing Federation warehouse and celebrates the building’s rationally framed construction.

Each frame is infilled with a projecting bay window and a recessed sliding sash set within metal frames to add a finer layer of detailing and form a counterpoint to the heavy masonry façade. To the side boundary, the frame is infilled with copper panels with a standing seam that define a language consistent with the tower, while providing depth and resolution to the ‘party walls’.

A community cultivating approach to hospitality

Recognising a community with a desire for memorable cultural experiences, Ace delivers its trademark community-cultivating approach to hospitality. The one-of-a-kind landmark hotel features 257 guest rooms and suites over 17 levels with a roof level that accommodates a bar and dining area with spectacular views and solar access. The interior’s ground floor is a series of linked active spaces with a sophisticated lobby bar, restaurant and café .

The activation and rejuvenation of Foy Lane

The hotel lobby is accessed off Wentworth Avenue, adjacent to which is a bar and restaurant with a separate street entry. Welcoming patrons via the Foy Lane entrance, the Good Chemistry café with oversize bifold doors plays a role in the revitalisation of the area as a hub of activity.

Also contributing to Foy Lane’s activation is the vibrant public artwork City Lights by artist Callum Morton. The illuminated installation made of black powder-coated steel and white strips housing point-LED lights celebrates the beauty of the industrial and is highly visible from multiple vantage points.

Crowning the tower is a large room with picture windows framed by deep terracotta with integrated planters which provides panoramic views over Surry Hills. The space opens out onto two terraces, both with retractable roofs and accommodates Kiln restaurant designed by Fiona Lynch.

The architectural opportunity in historic buildings

The way the building’s architecture champions the site’s rich history makes for the perfect backdrop for Ace Hotel’s inviting blend of the past with the contemporary, while showcasing how a modern building can provide more than just accommodation.

The refurbished facade, materiality and emphasis on cultural and artistic amenity accentuates the historical significance of the area and sets a benchmark for utilising historic buildings.