What began as a construction workshop for students and novice professionals now serves as LuOgo, a temporary public space in Lugo, Italy. The project is designed by Rome-based firm in partnership with Italian door and window manufacturer . Together, the two have created an open-air wooden structure that animates a previously empty garden space by uniting people within its multifaceted frame. 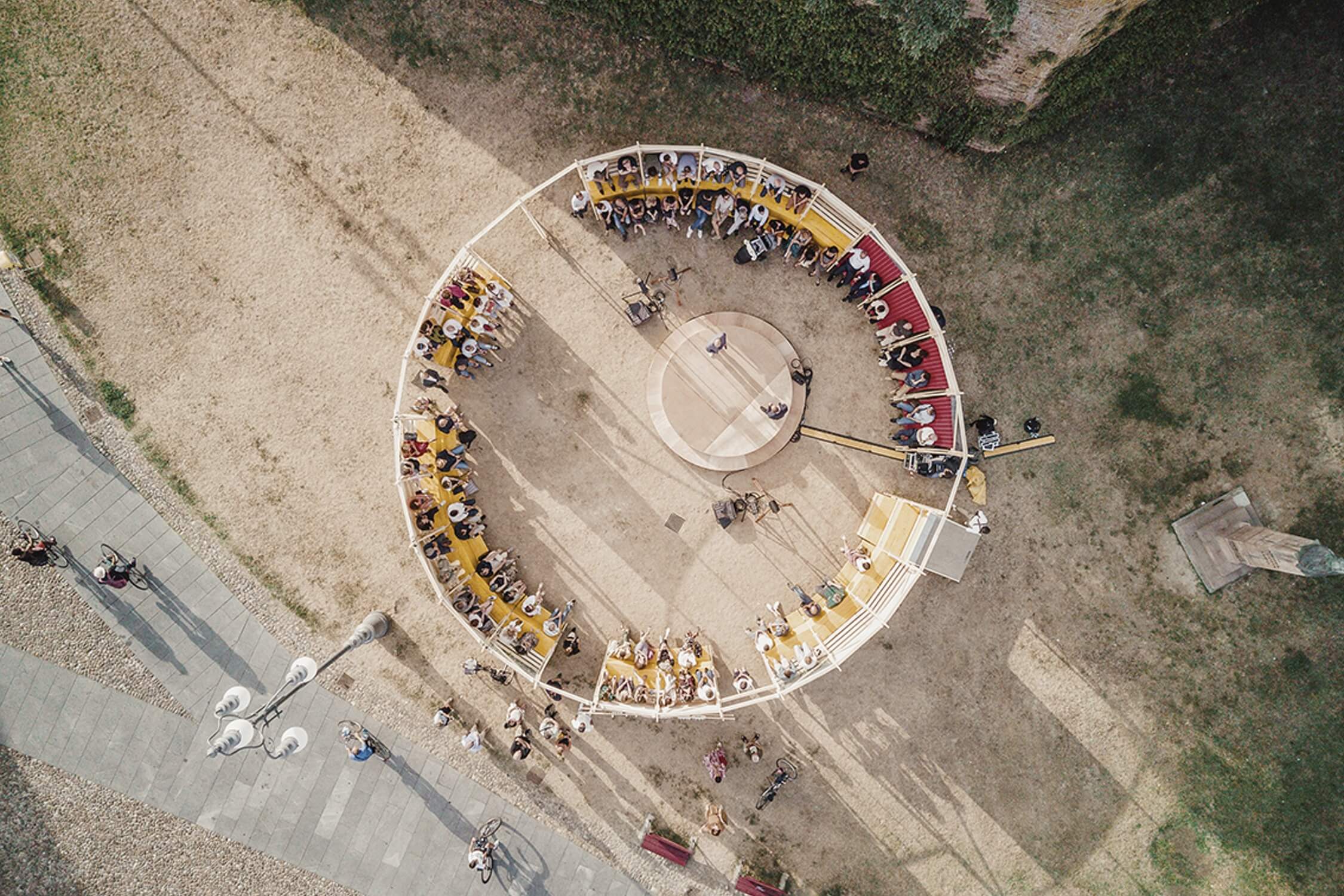 The project name, LuOgo, is a clever translation of the design itself. Located in the historic centre of Lugo, the installation resembles an “O” when viewed from above — hence, Lu-O-go. As circular shapes are commonly used in nomadic architecture, Orizzontale’s designers felt that this form would be most fitting to “constitute a new centrality” of the pre-existing space at the Piazza dei Martiri.

While the monumental site has always attracted visitors who share a deep passion for its densely layered history, prior to the installation of LuOgo, its disconnected, unpredictable flow did not encourage visitors to interact. Recognizing this, Orizzontale designed LuOgo with inclusivity at the forefront of its approach. 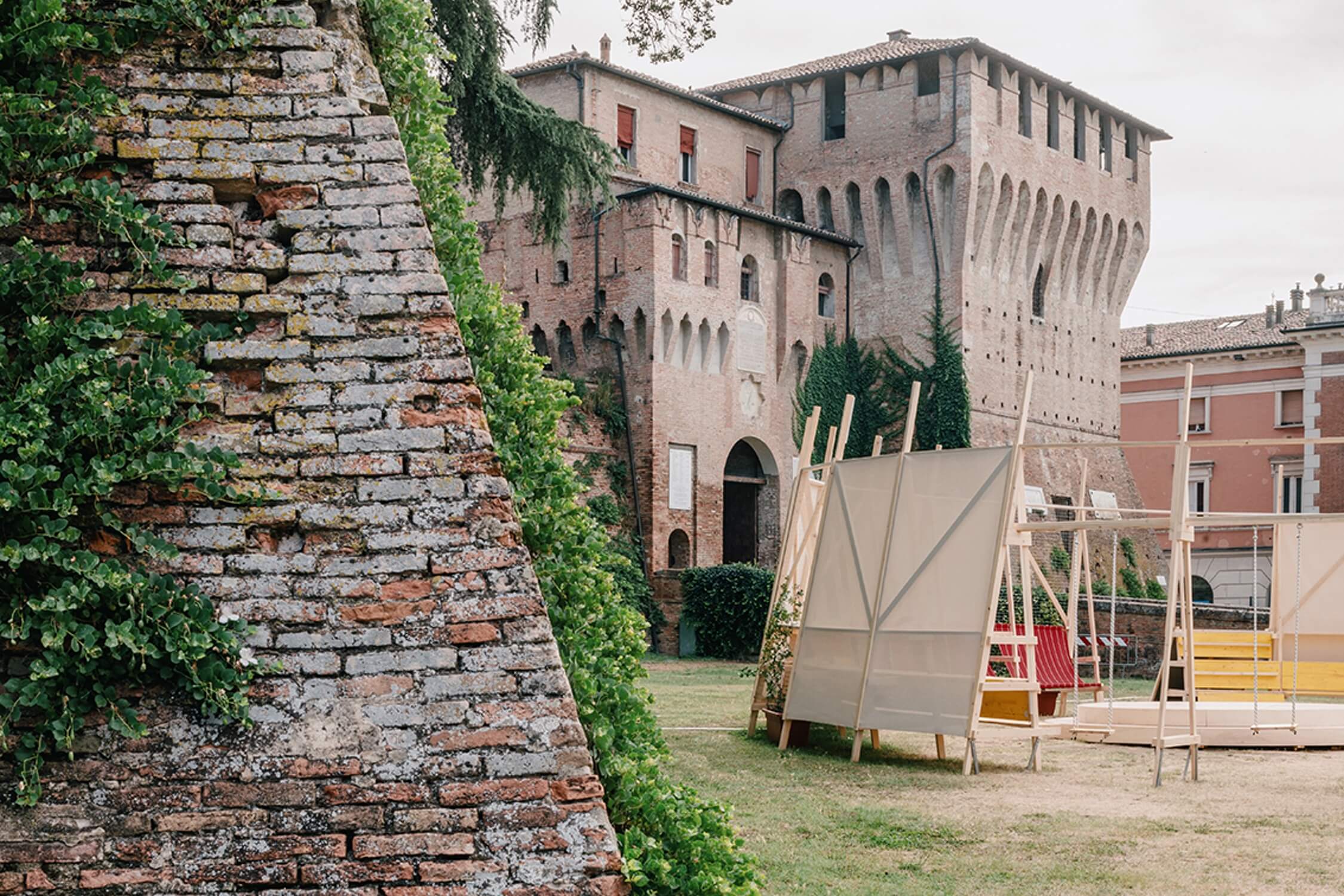 Standing at the foot of the Rocca Estense, a bastion fortress that serves as a prominent local landmark, LuOgo actively invites visitors to enter its open walls and take it upon themselves to find creative ways to connect. What was once an overlooked empty field now serves as a true public square, where visitors rejoice in coming together to celebrate their talents and creative outputs. Clearly, all it takes is a little push to redefine an urban context and add meaningful function to an otherwise mundane space. 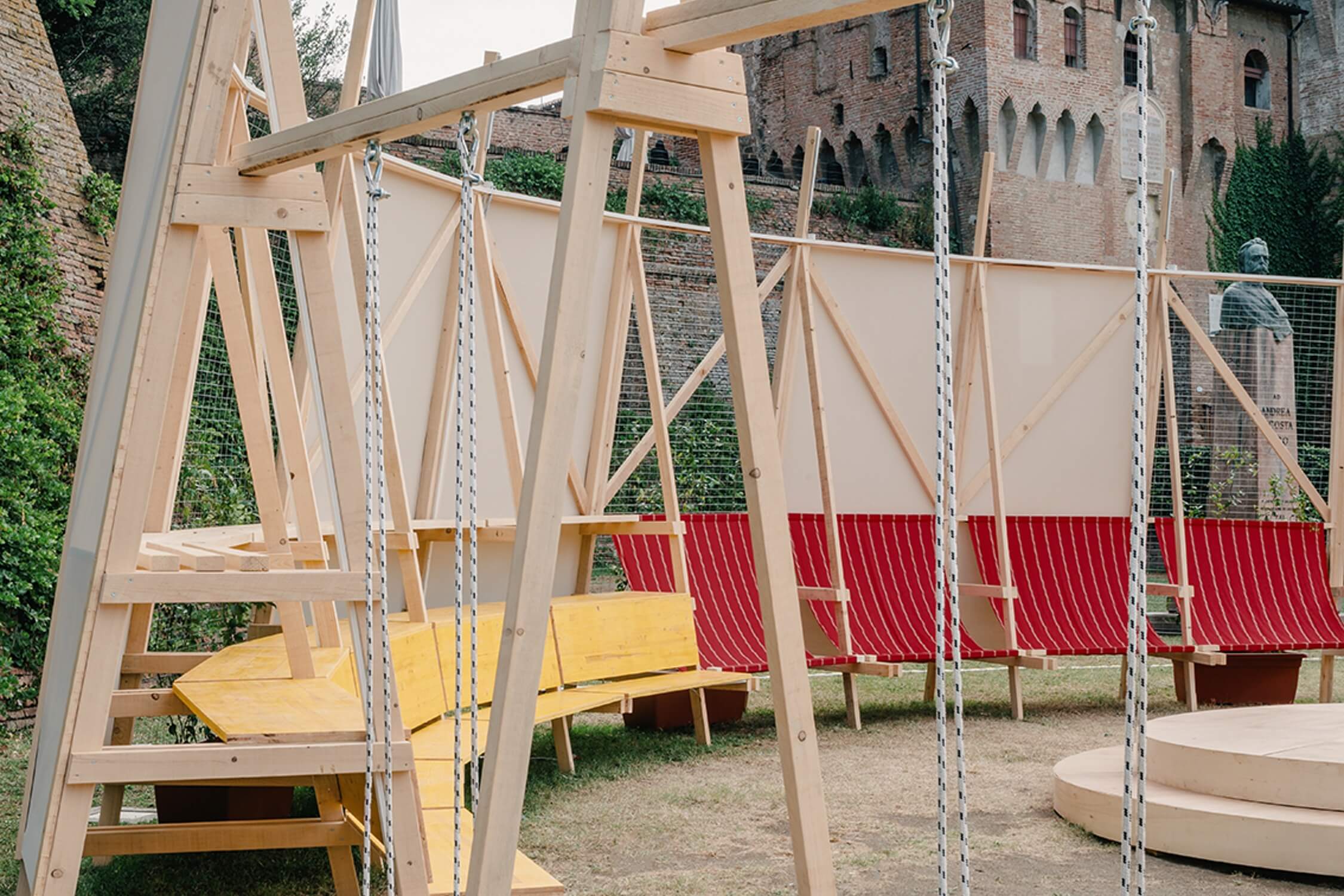 Inside the circle, yellow wooden benches and red hammock style seats line the perimeter of the structure. Each seat faces towards the centre of the circle, where a raised wooden platform forms a stage. Shading sheets and metal nets line the frame to produce a thin layer of protection between the interior and exterior, without completely closing it off. 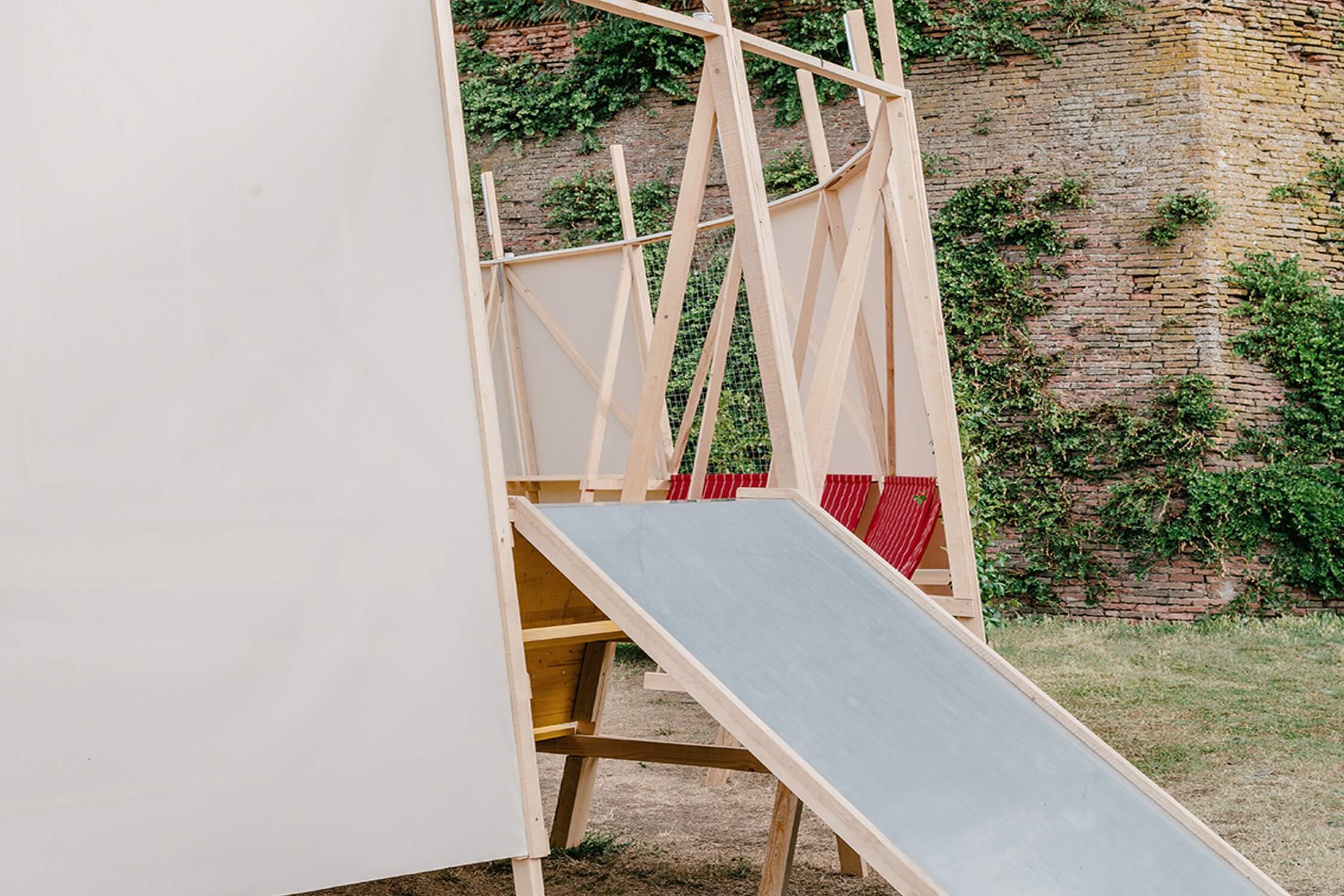 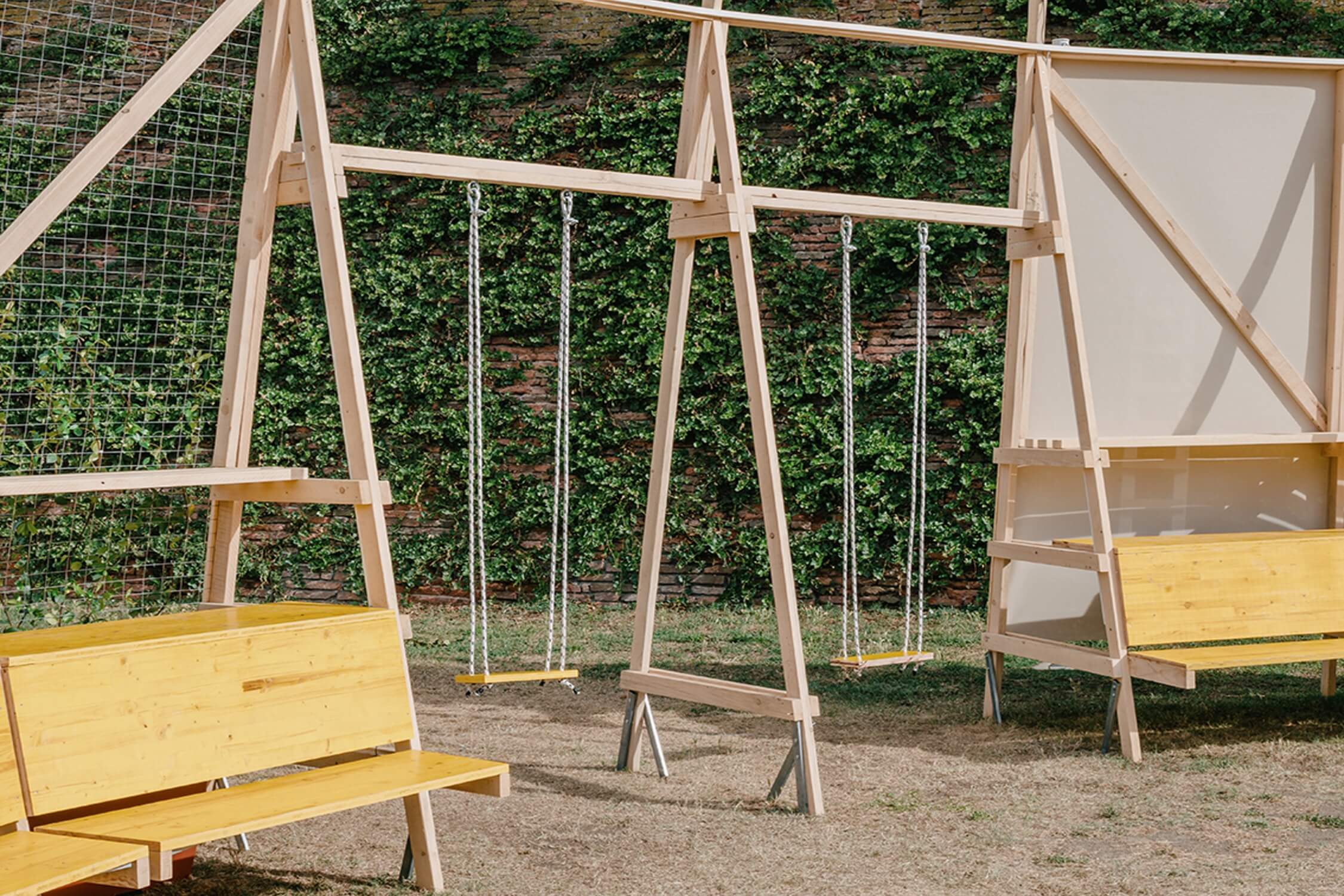 In an effort to allow different functions to coexist in the space, dynamic elements like swings and slides were installed to encourage play and movement. The flexibility of possible function within the space creates the opportunity for unexpected outcomes to occur, and constantly brings a new purpose to LuOgo. 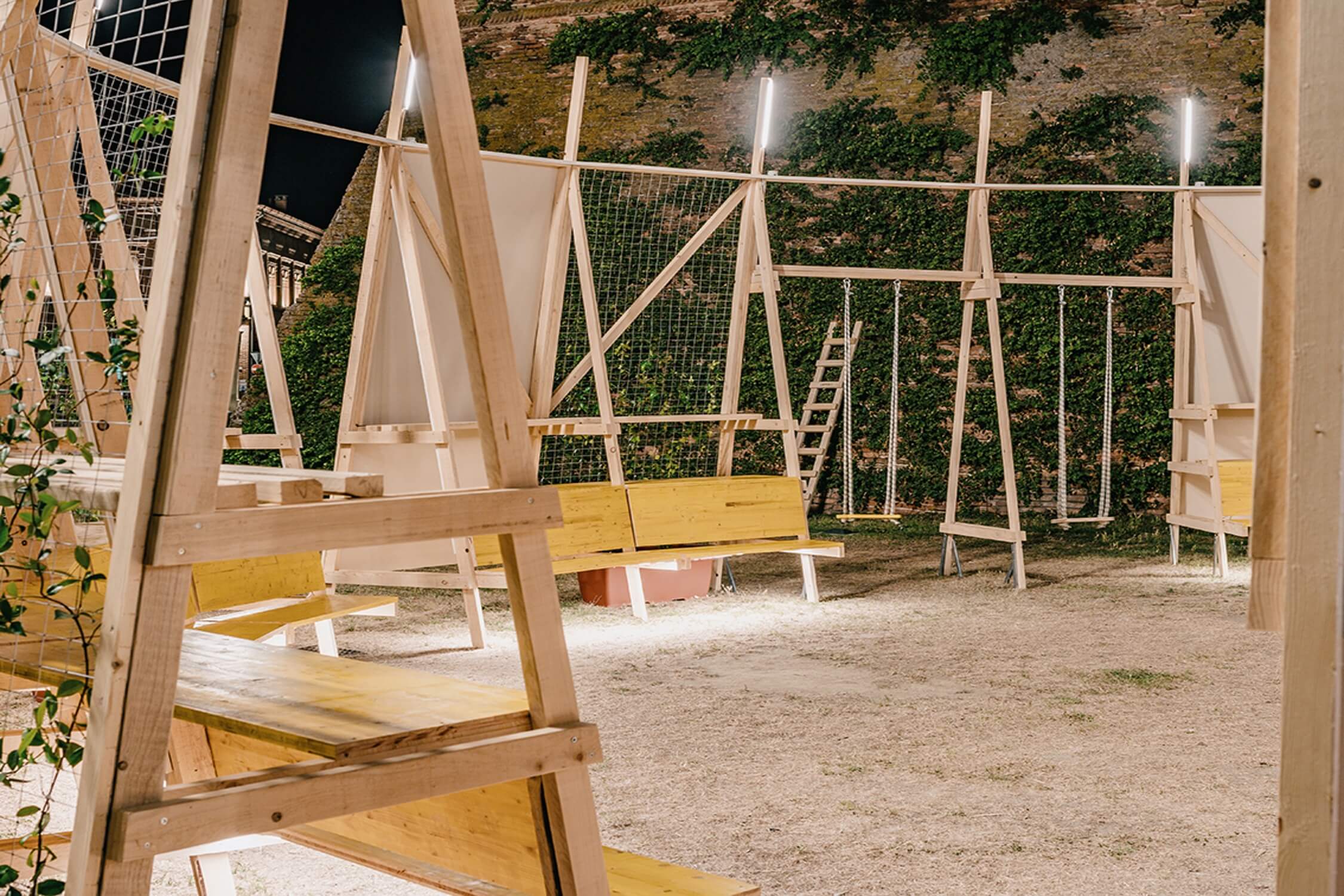 Day or night, LuOgo’s doors — or lack thereof — are always open to visitors. Equipped with LED lighting, the interior becomes the perfect place to host small concerts, performances, talks, and much more. 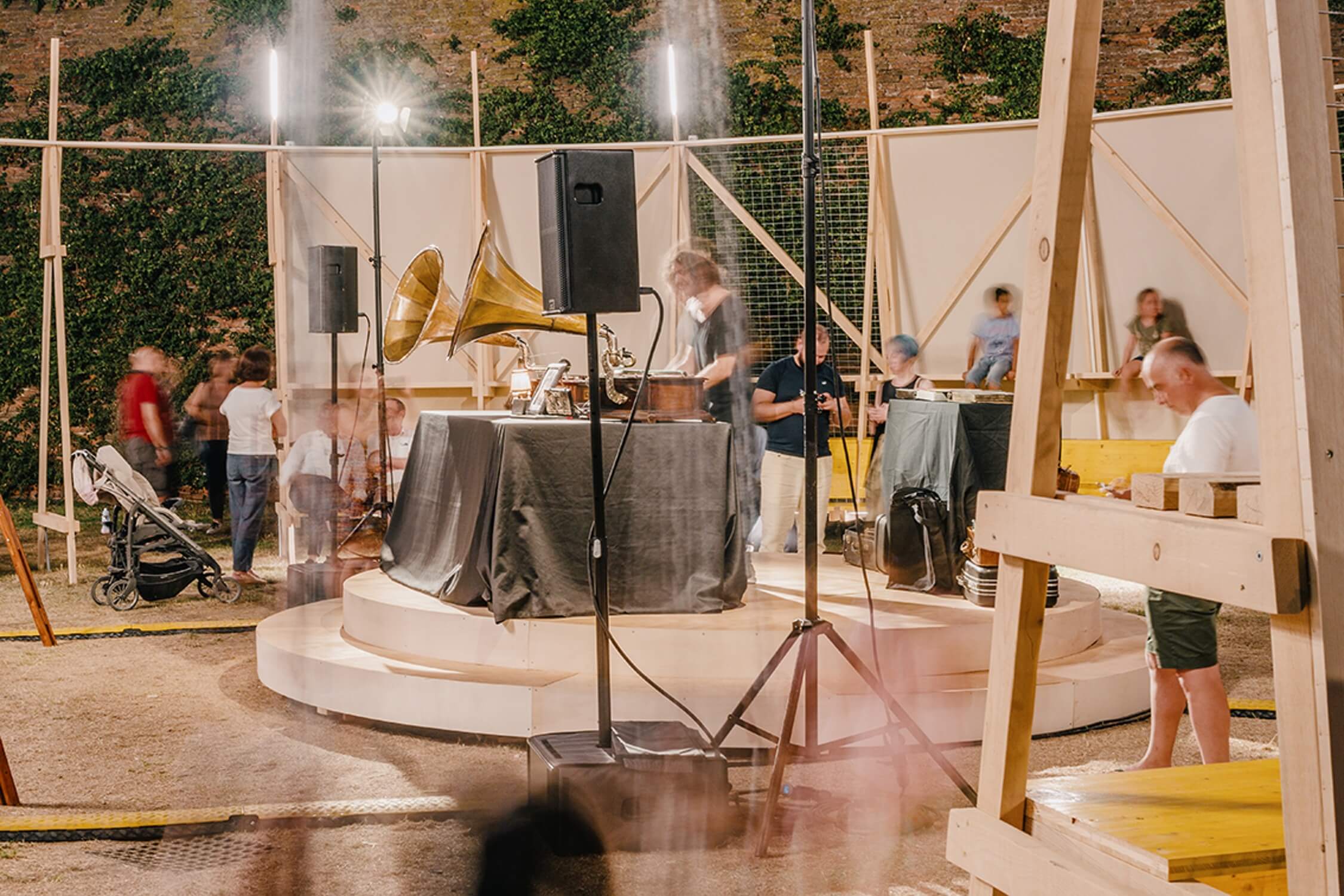 With the lit-up space acting as a beckoning call in the dark night, Lugo’s inhabitants have been quick to respond. The small space has found itself to be quite the hub for the many varieties of talented creatives. Whether performing, playing or simply observing, those who enter LuOgo’s walls are instantly immersed in a sense of belonging and celebration.

If the installation proves anything, it’s that even the simplest of designs and architecture can bring people together. While it’s easy to get lost in the grand scheme of things, the spaces that unify diverse groups are often the most unexpected ones.