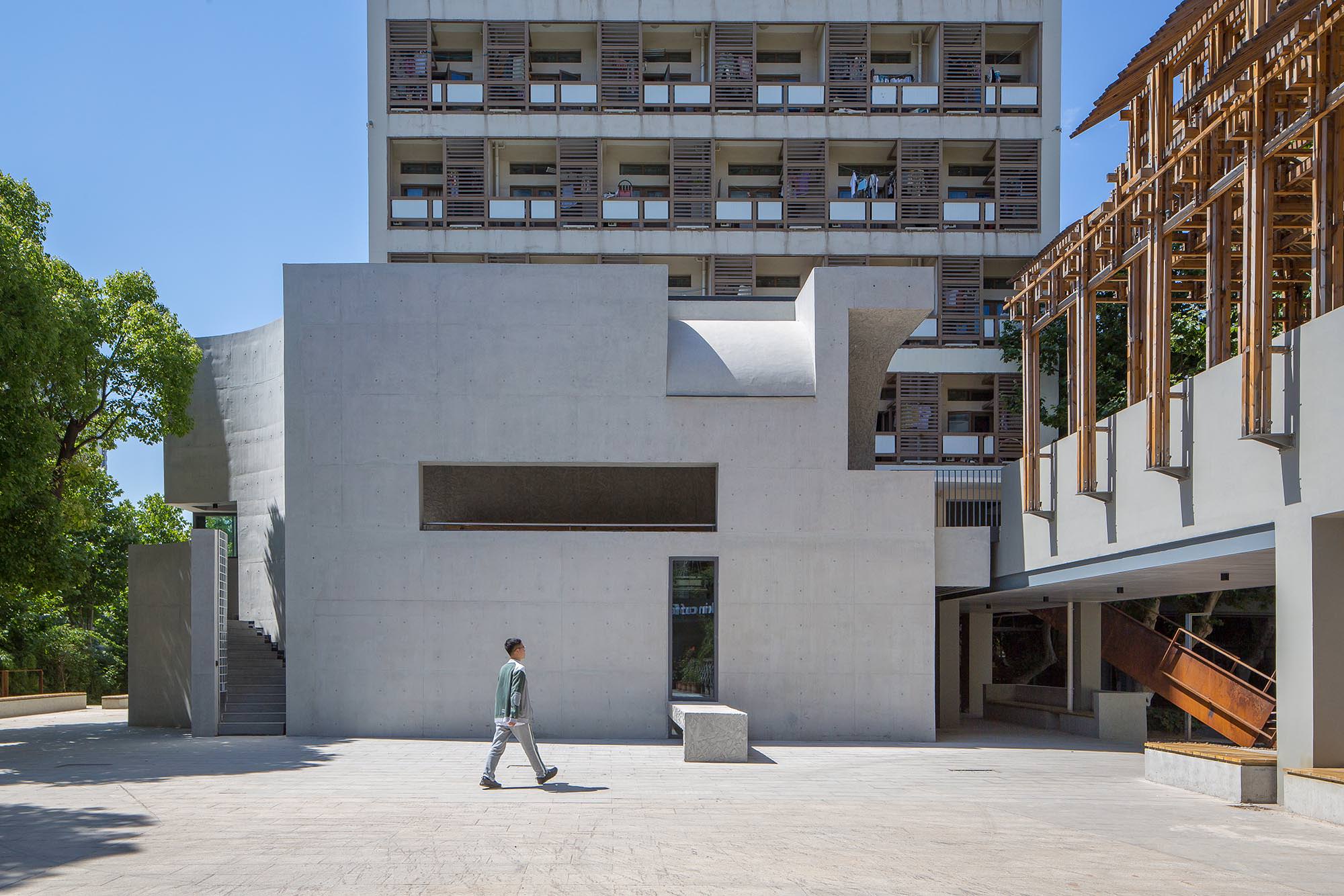 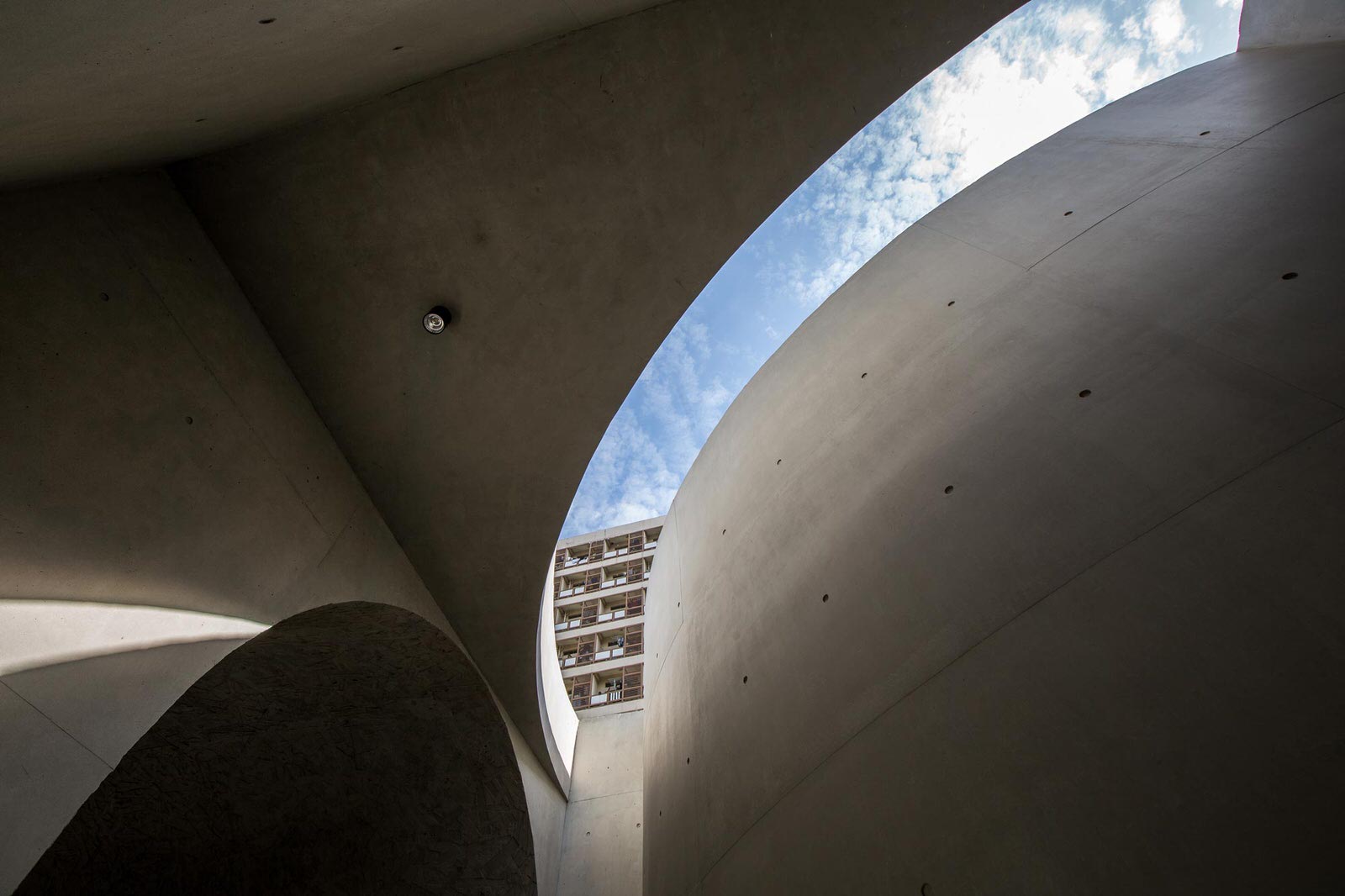 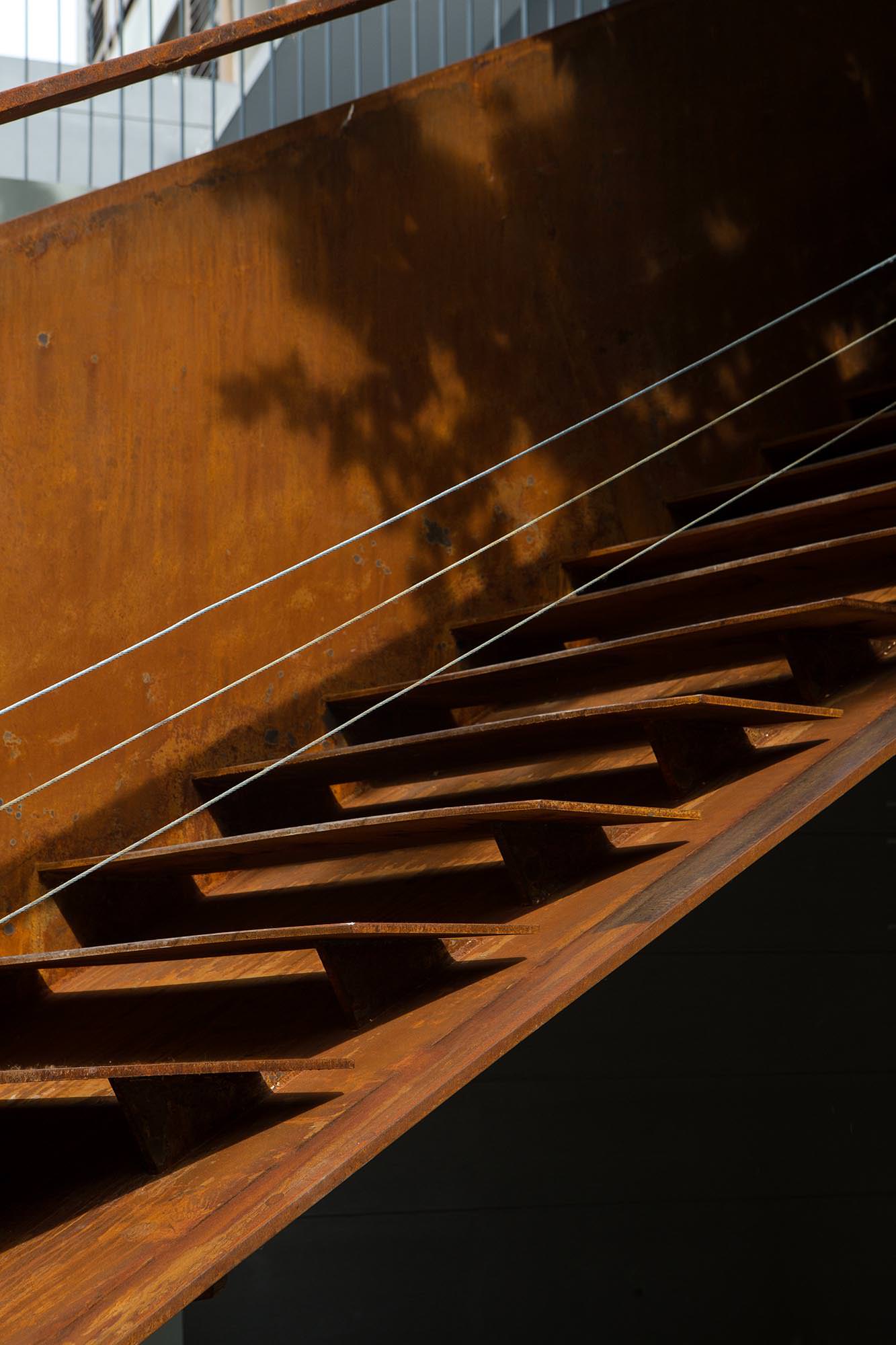 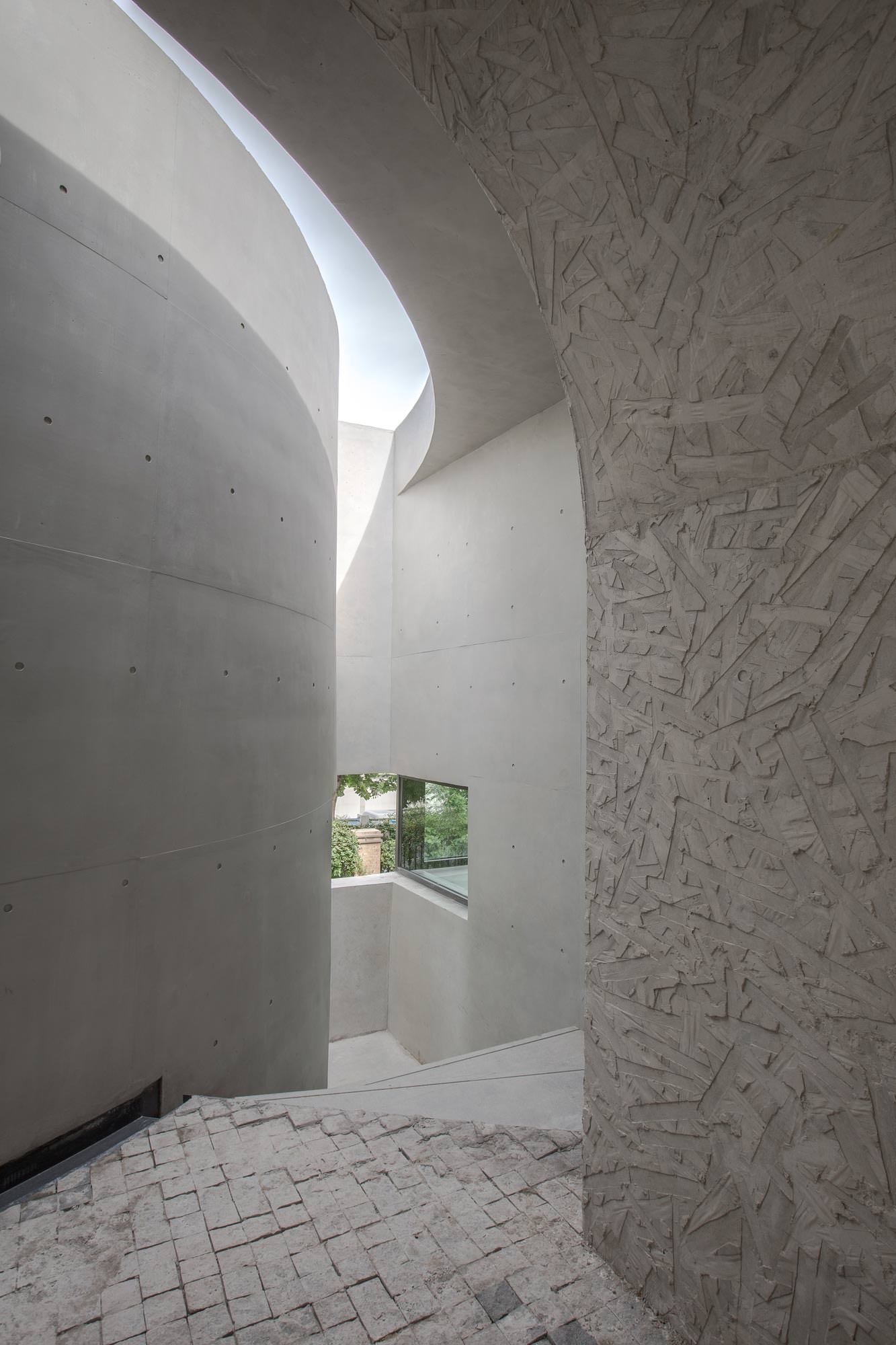 A sculptural extension moulded by the visions of has found itself attached to a bustling campus within China’s University of Arts. Appropriately named ‘Concrete Exhibition Hall’, the gallery can be found attached to a dormitory that faces two predominant roads, with one being a major pedestrian street that many students, cafes and creative shops occupy. The gallery aims to bridge two existing dormitories for a layered and modernised connection while enriching the campus altogether.

Beginning with a phone call, the Shanghai-based architects were initially commissioned to renovate a common room while “(adding) a small house in the open space between the buildings (for staff) to restore and exhibit ancient European oil painting and Chinese porcelain tiles respectively”. Fearing that the decision would disrupt the already bustling rhythm of the campus environment, Atelier Diameter instead proposed a gallery to be attached to the side of the existing dormitory. The decision led to an attachment that resembles a monumental block of white concrete with a corner piece carved to accommodate the canopy of an existing sycamore tree. 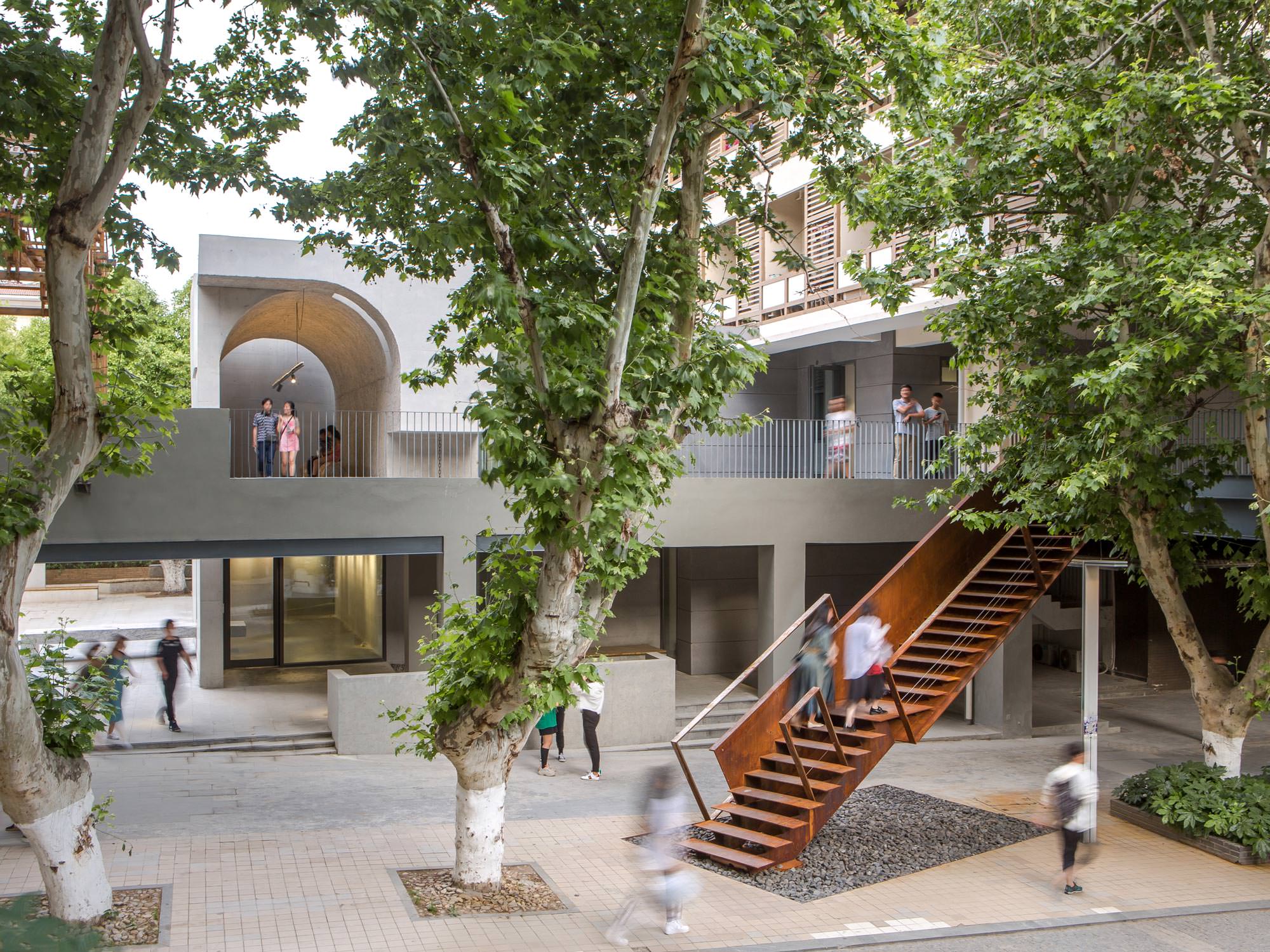 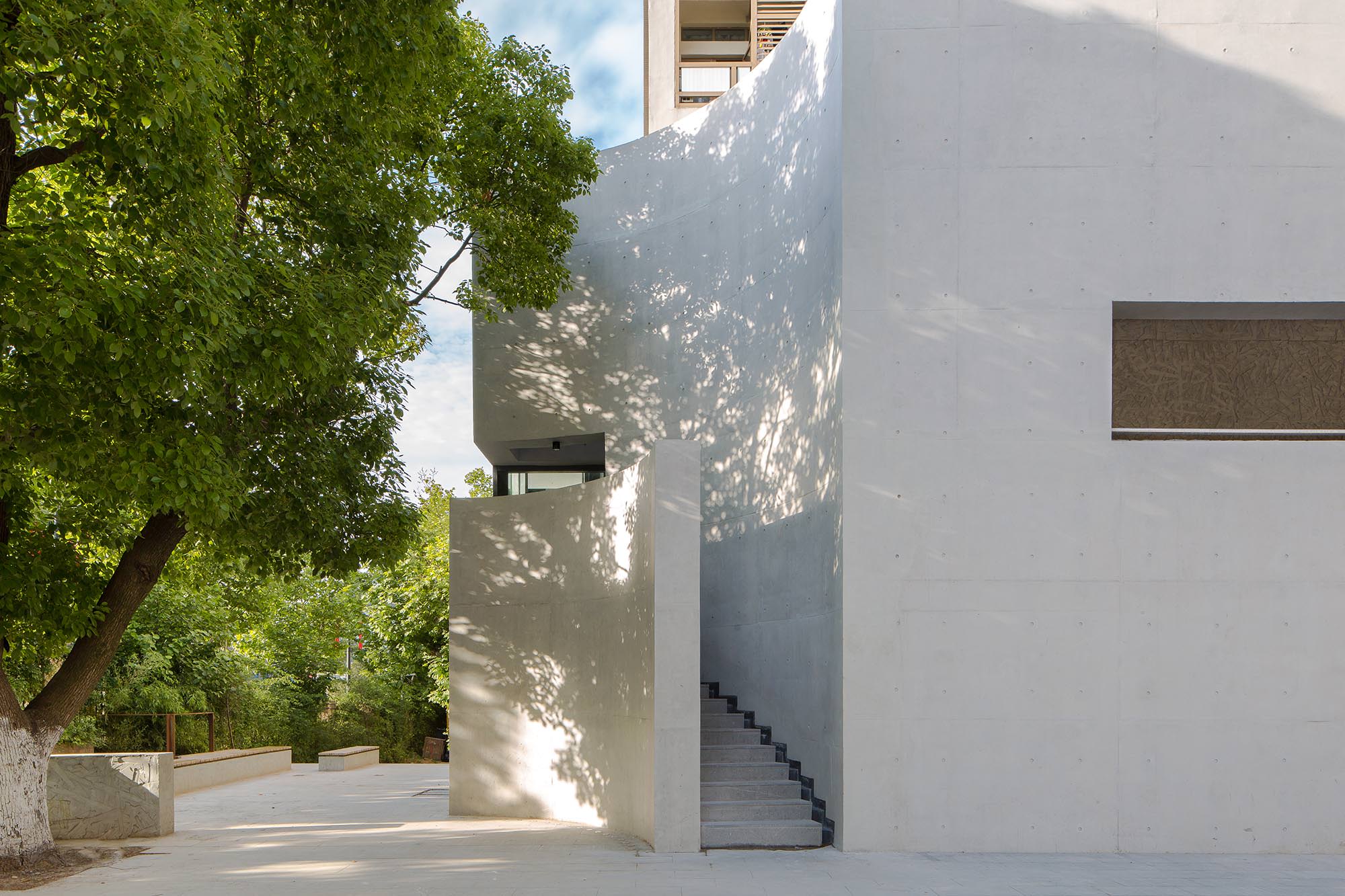 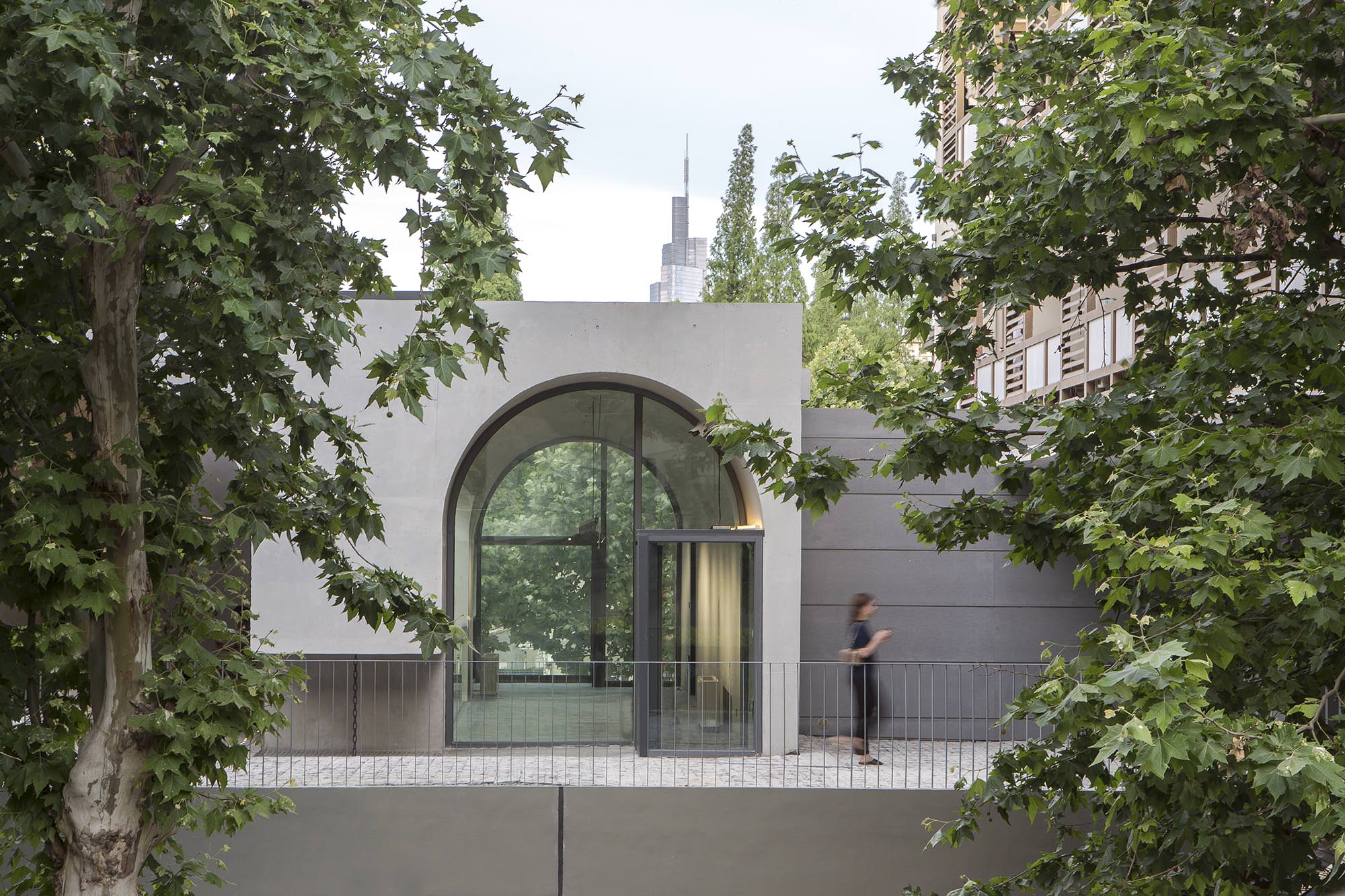 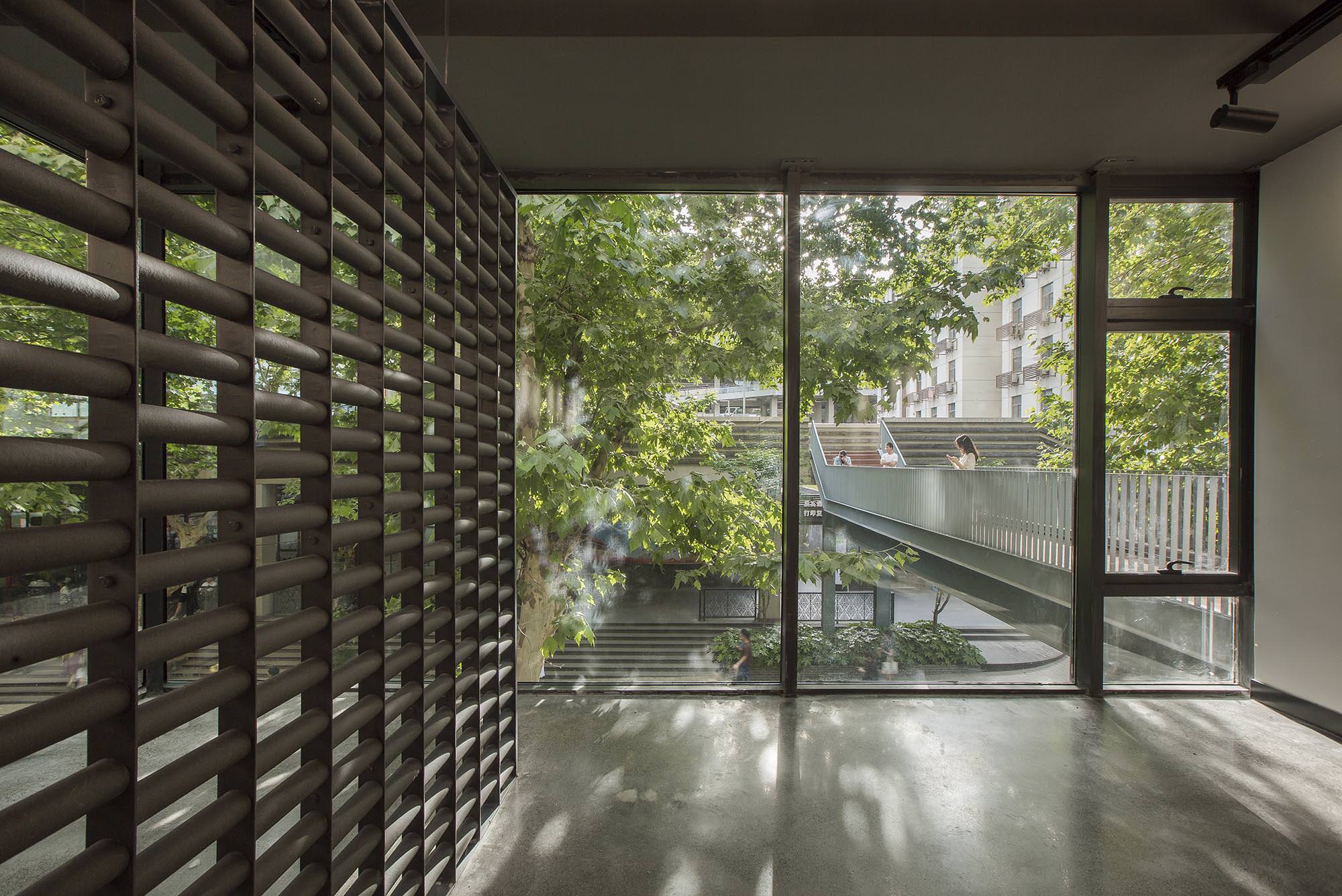 Inside, the 565 square metres gallery is separated into independent exhibitions with the ground floor reserved for Asian Pottery while the upper for European Oil Paintings. Expressive and grand arch and geometric openings puncture either side of the building, an action greatly inspired by Nanjing’s Lingu Temple’s Wuliang Hall. The architects, hoping to further exude artistic flare to the gallery, specially designed a mould for the gallery walls to mimic frantic strokes of a paintbrush—the result leaves a tactile effect that almost mimics newly formed stalactites or hardened acrylic paint.

Conveniently, both levels are attached to the dormitory’s ground level and pedestrian bridge with varied wide openings and egress for additional choreography in circulation. The two floors are externally connected by the curved staircase located at the curved corner of the building—a distinctive separation of the gallery levels based on the client’s request. 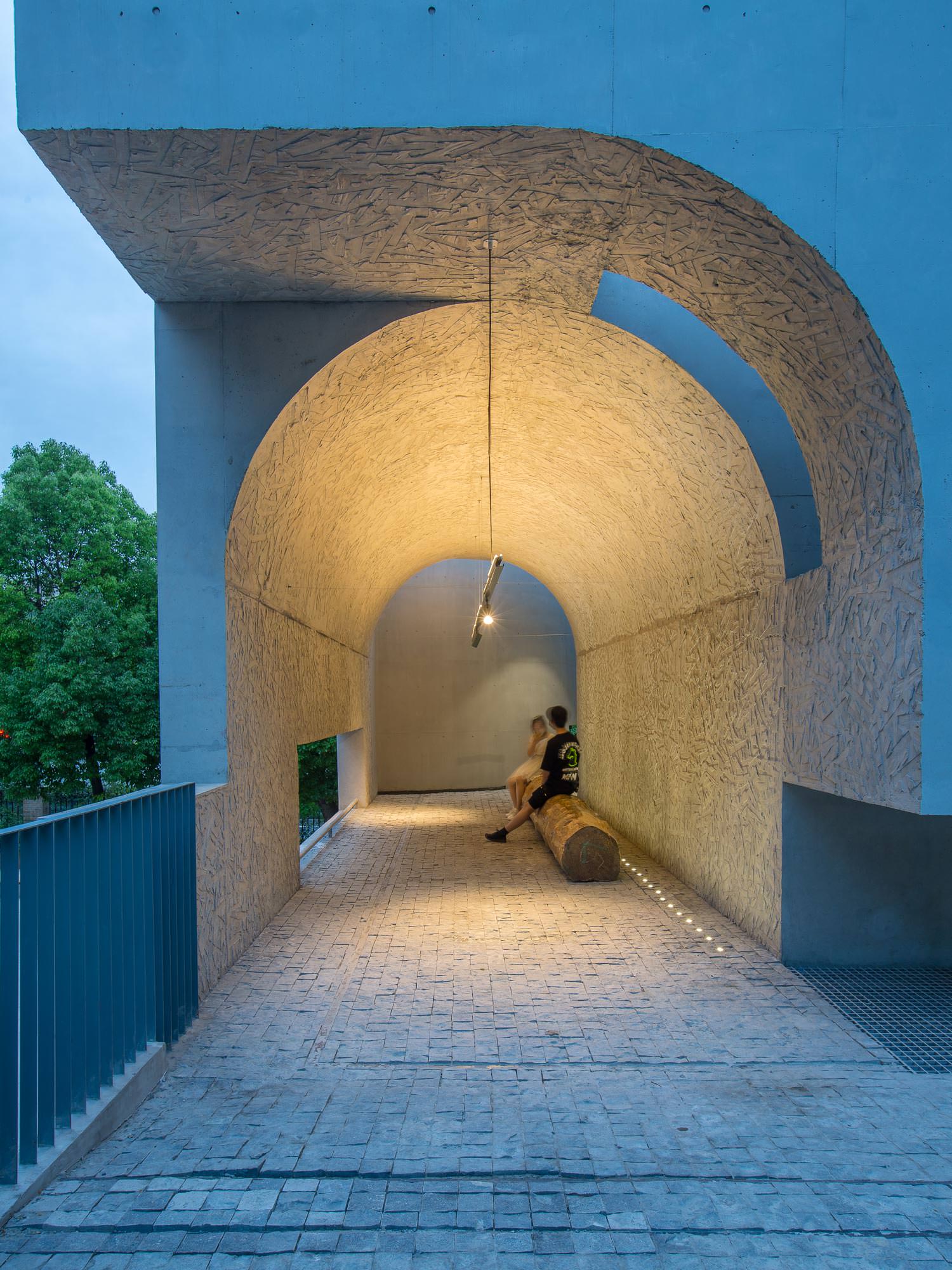 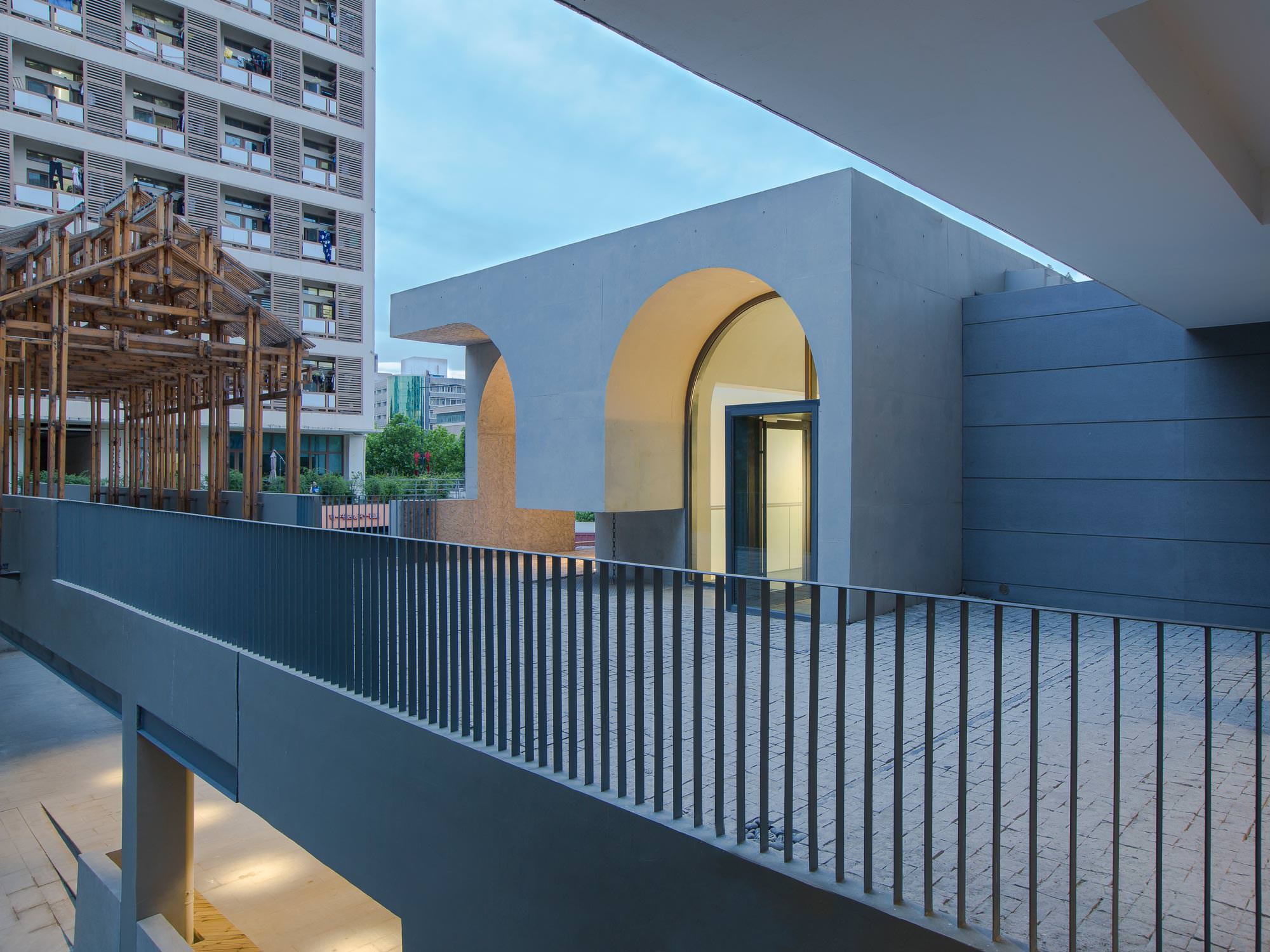 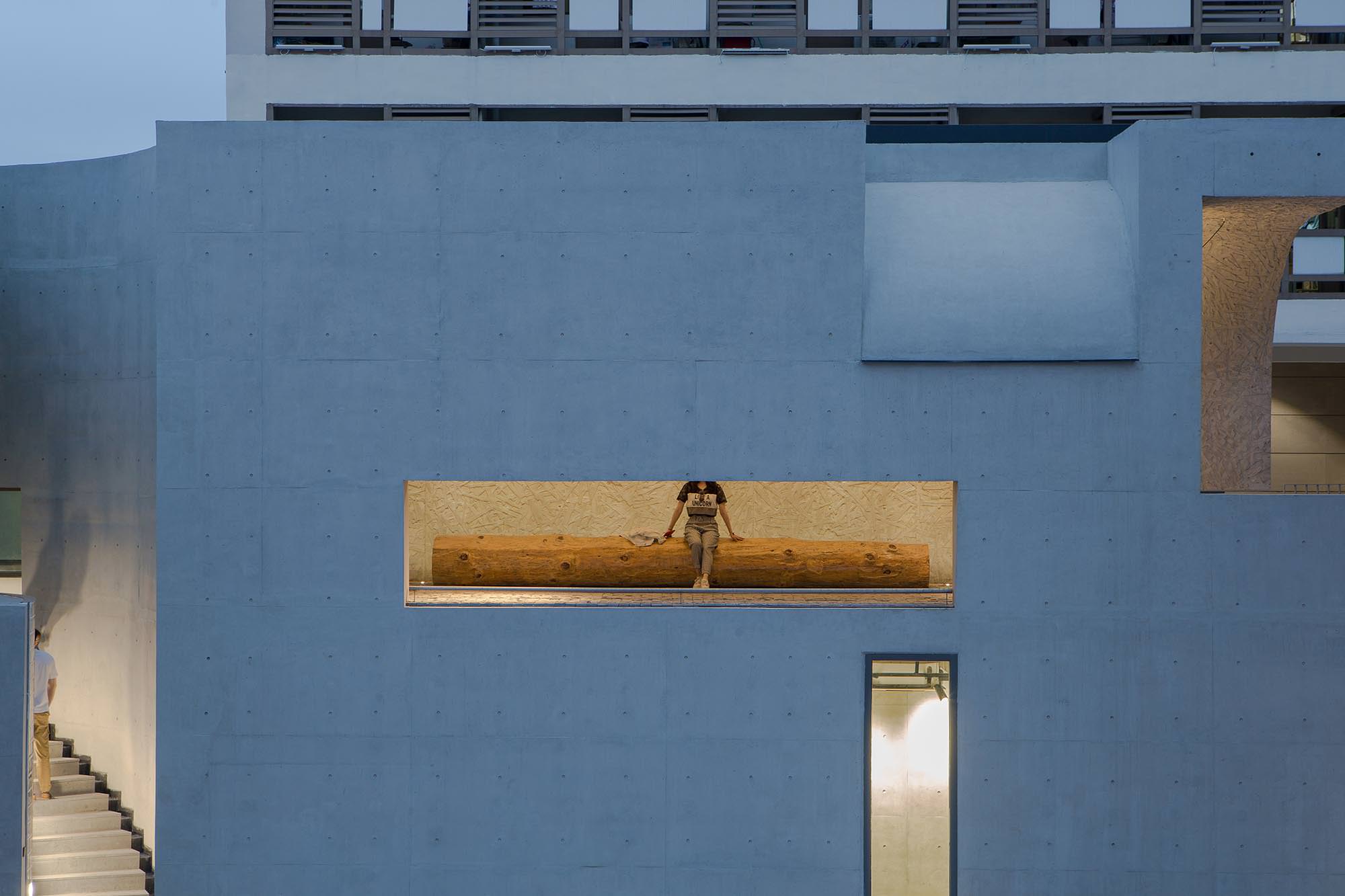 To further integrate the gallery and dormitory circulation, a veranda characteristically marked by a large log bench is programmed onto the floor above, which can be seen externally through a rectangular cutout. Additionally, a new weathered steel staircase is offset from the building and attached to the existing bridge, allowing students to appreciate the sculptural form and existing sycamore trees that played a role in the architects’ decision for the gallery’s fateful placement.

Taking great care in the existing community and site context, Atelier Diameter successfully introduces a masterful apparatus that mends the gaping transition. It allows the design to become more impactful and meaningful for the building, providing a new beating heart to further ignite the vibrancy of the environment.