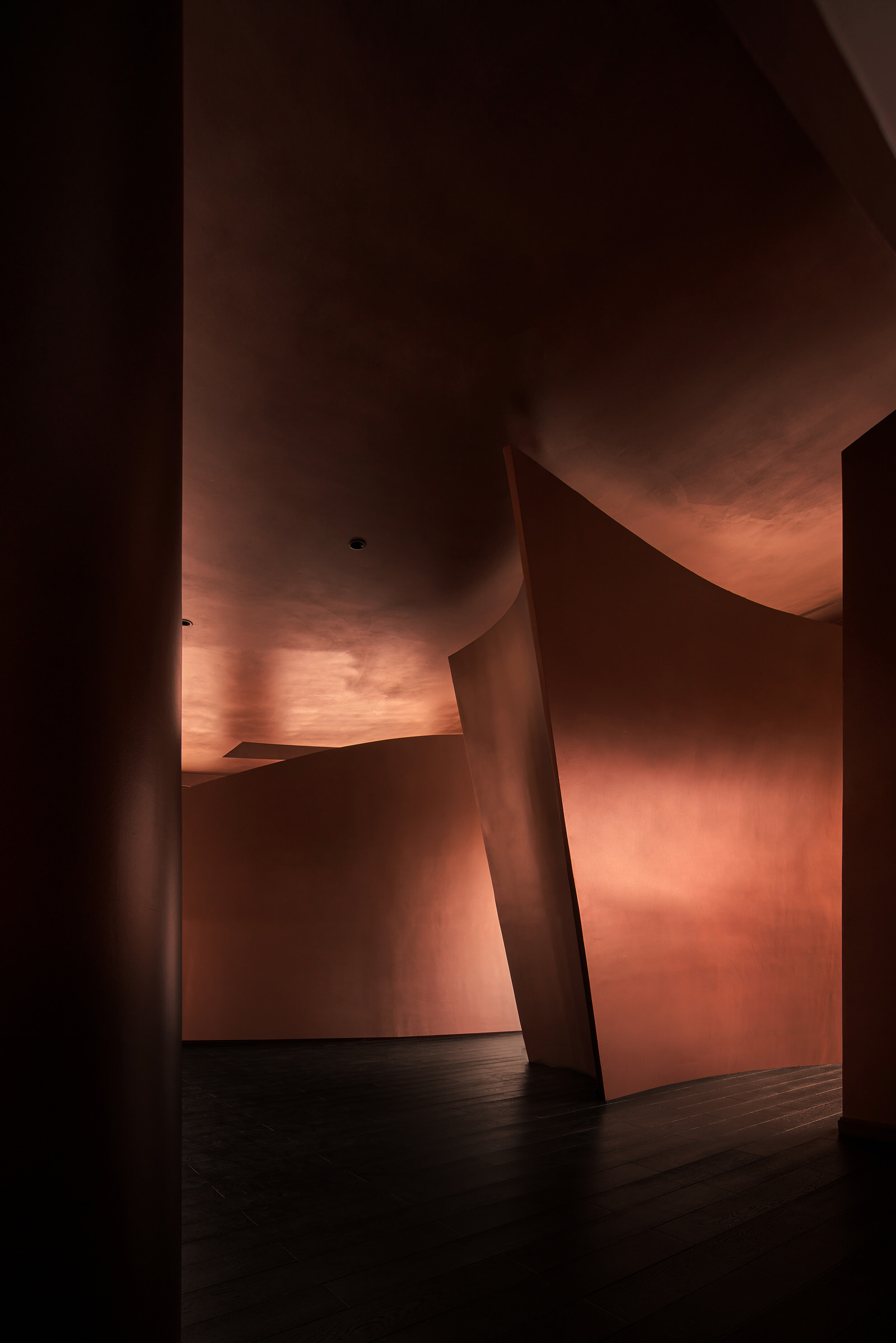 Come dine with me inside a space that appears as an architecturalisation of a world that’s a lovechild of Grand Canyon and Richard Serra. This impressive moody terracotta interior is AD Architecture’s Black Diamond, a French restaurant ready to inspire a different level of emotional ambience from the beginning to the end of one’s dining experience.

Located in Nanchong, China, Black Diamond occupies 700 square metres over two levels of a waterfront building. The project is part of a collection of facilities that makes up a cultural tourism complex that includes cultural hubs, offices and entertainment known as World Park City. Wanting to create an alternative dining experience that would deviate from the conventions of a Western Dining interior, AD Architecture approached the design from an emotional standpoint while capturing the romantics and softness some would associate with French dining. The decision led to curation of a series of planes, curves and surfaces moulded and shaped the circulation. 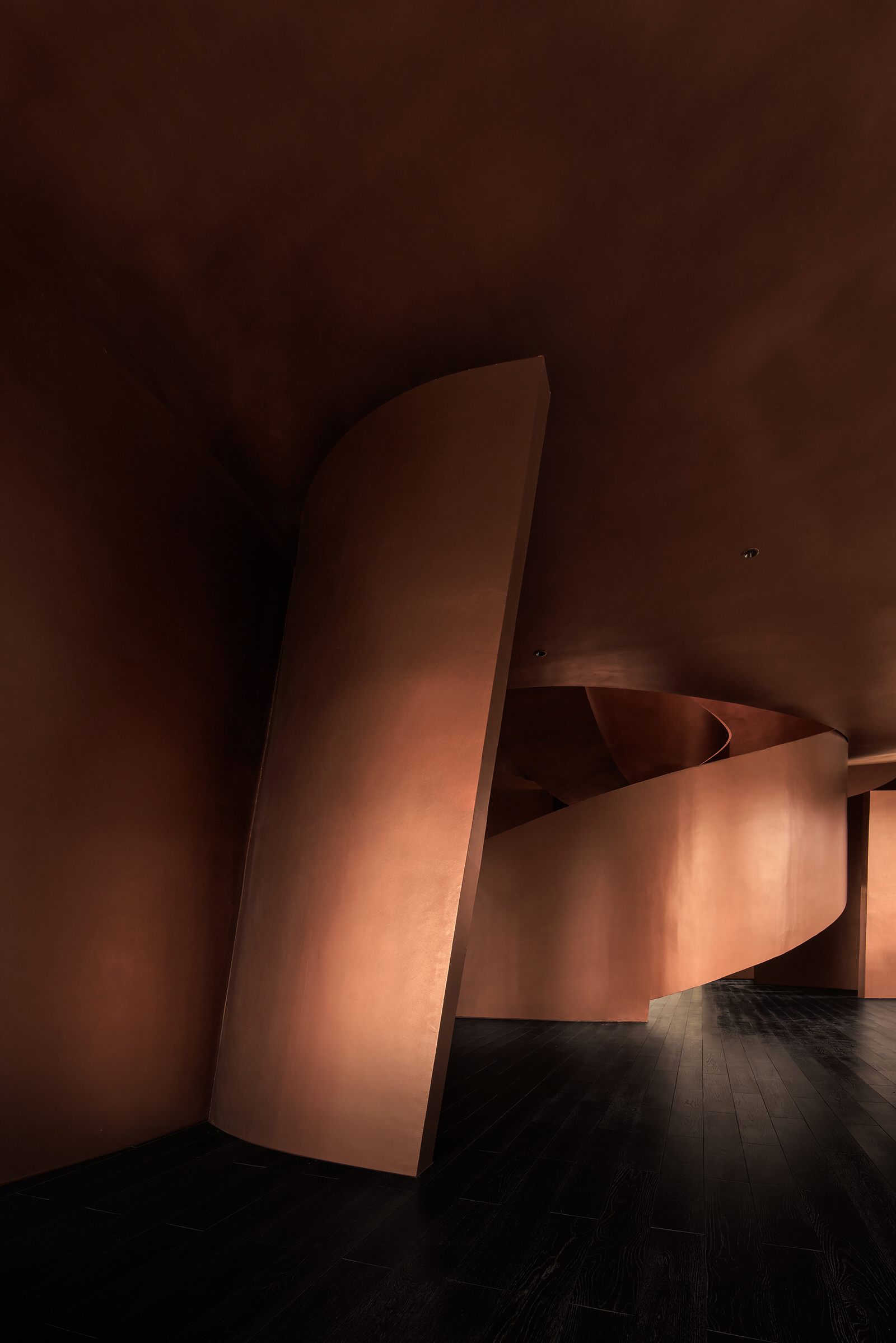 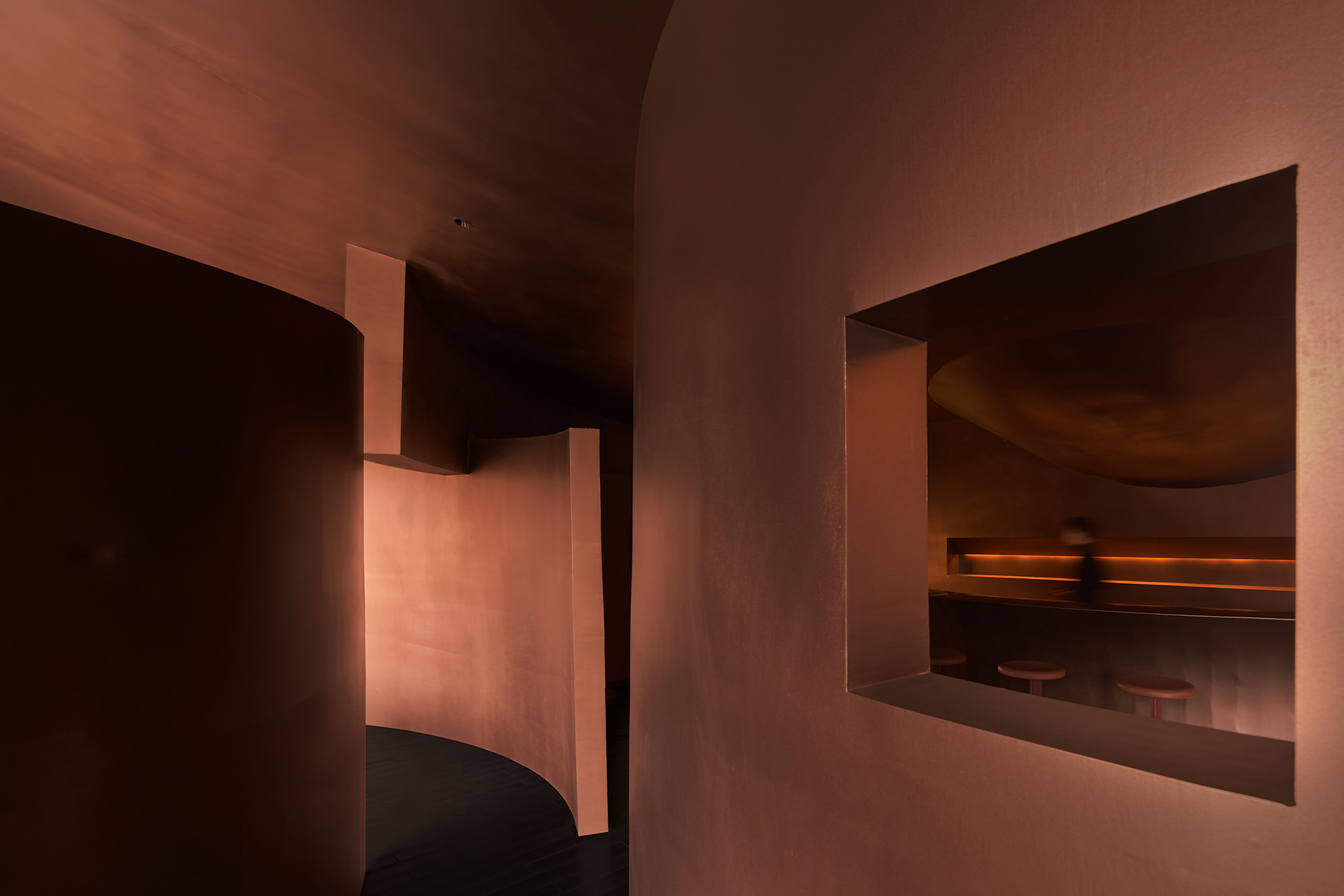 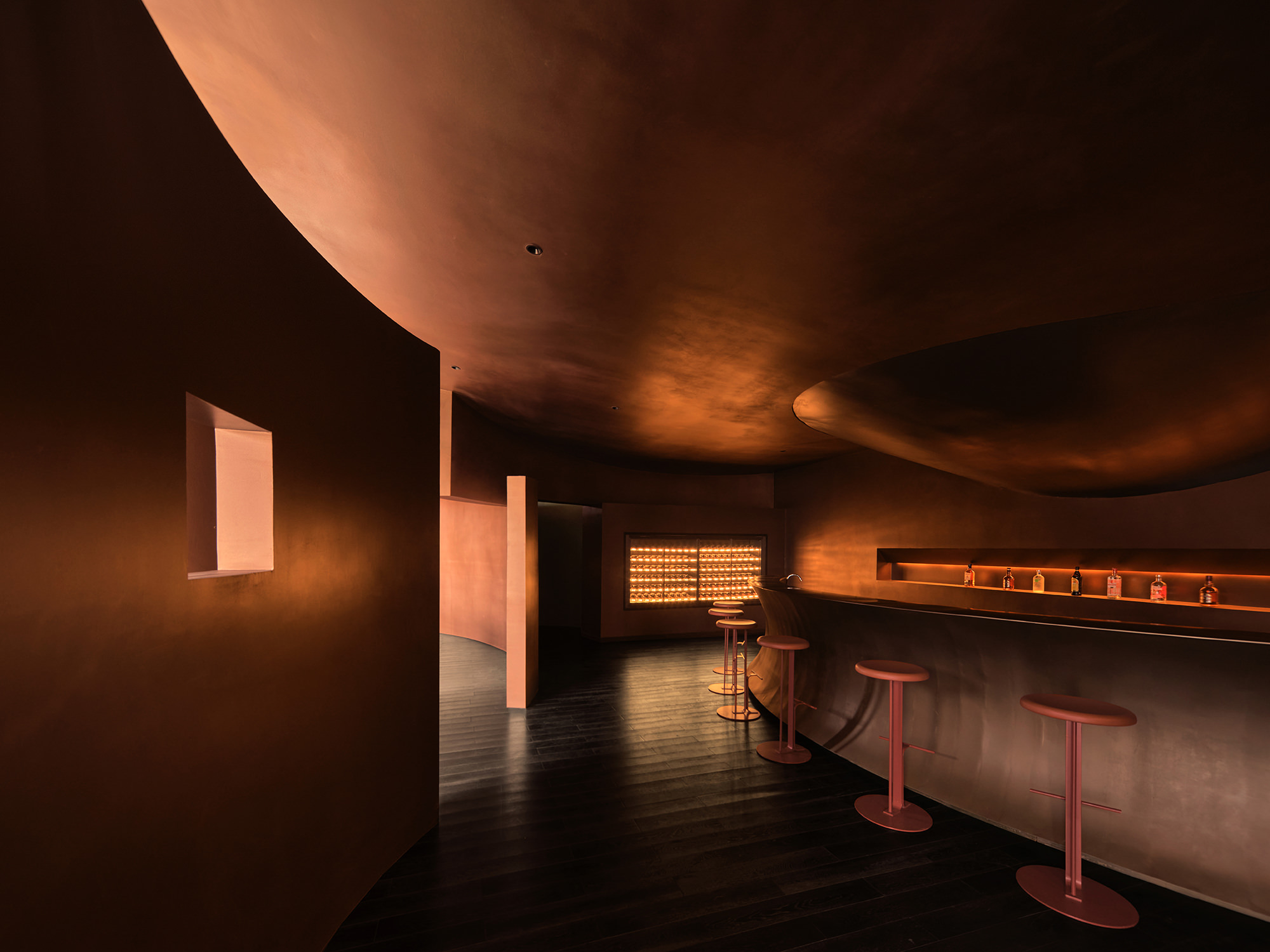 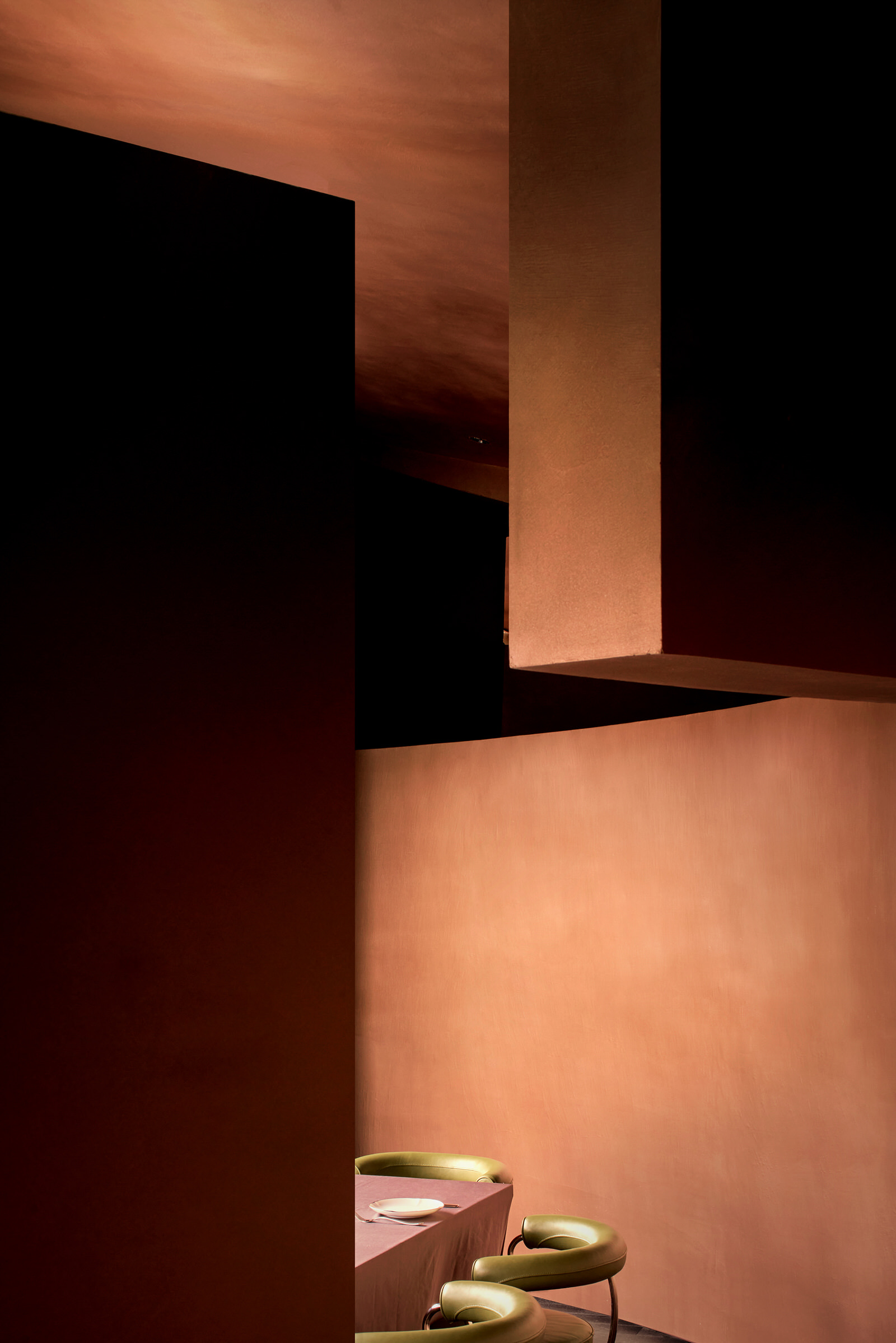 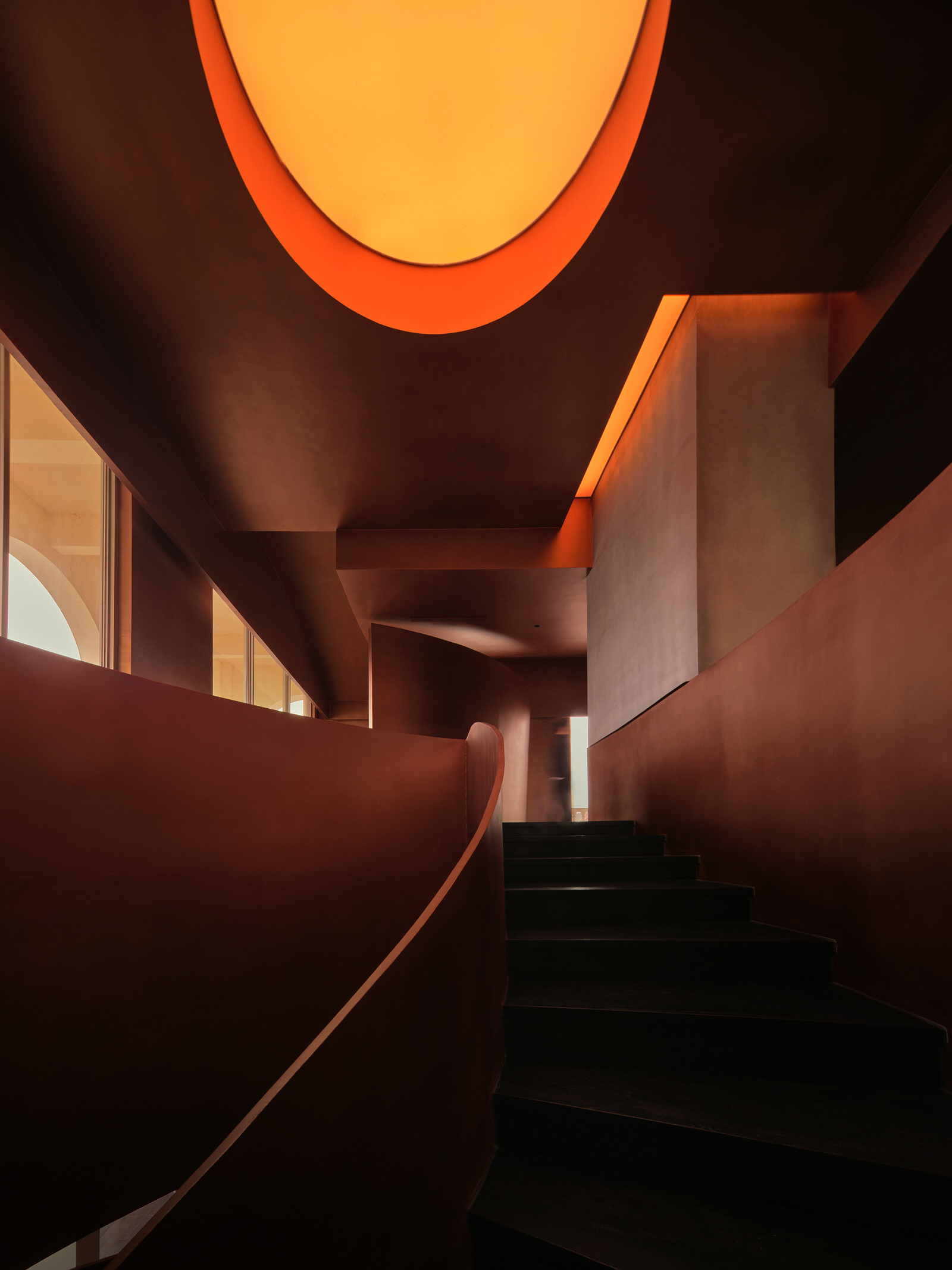 Inside, visitors are greeted with a field of rooms semi-enclosed with curved walls and slanted in a manner that offers a level of anticipation when being guided to their dining table. The sculpted motif carries on across both levels, which are interconnected by a suitably curved staircase. These partitions, very much like Richard Serra’s unforgettable installations, range at different heights and appear semi-interlocked with each other offering varied forms of sightlines that appears as a beckoning for one to peak into an intimate moment.

Of course, in addition to the spatial planning, it’s the orchestration of lighting, material, and colour palette that provides the sensual aura within the restaurant. Bronzed walls and timber floors are minimally lit, alluding to the romantics captured from photos of the crevices within the Grand Canyon. Warm yellow lighting is strategically placed at certain points of the restaurant for theatrics—as if the interior has brilliantly frozen the sun either just rising or setting in place. 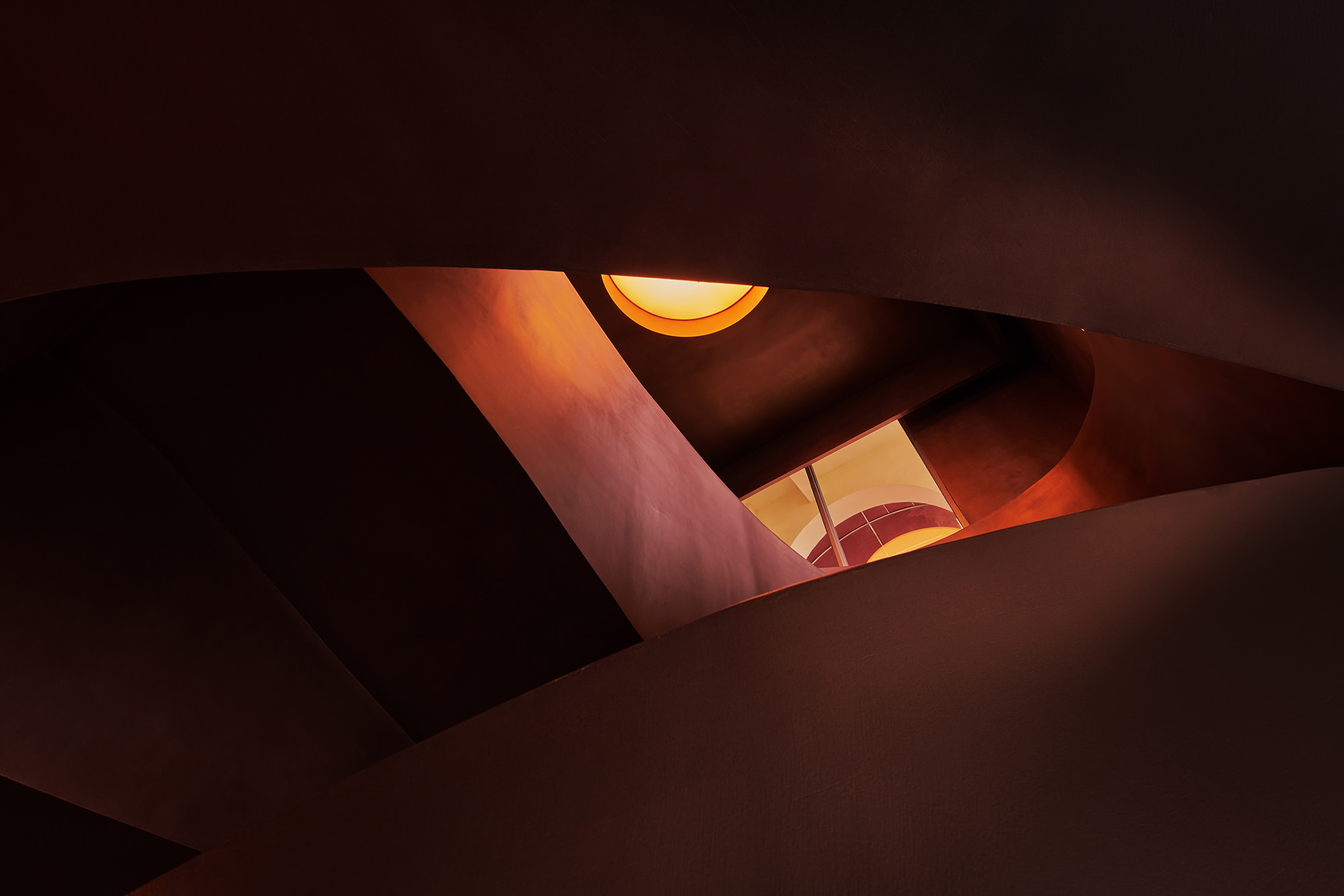 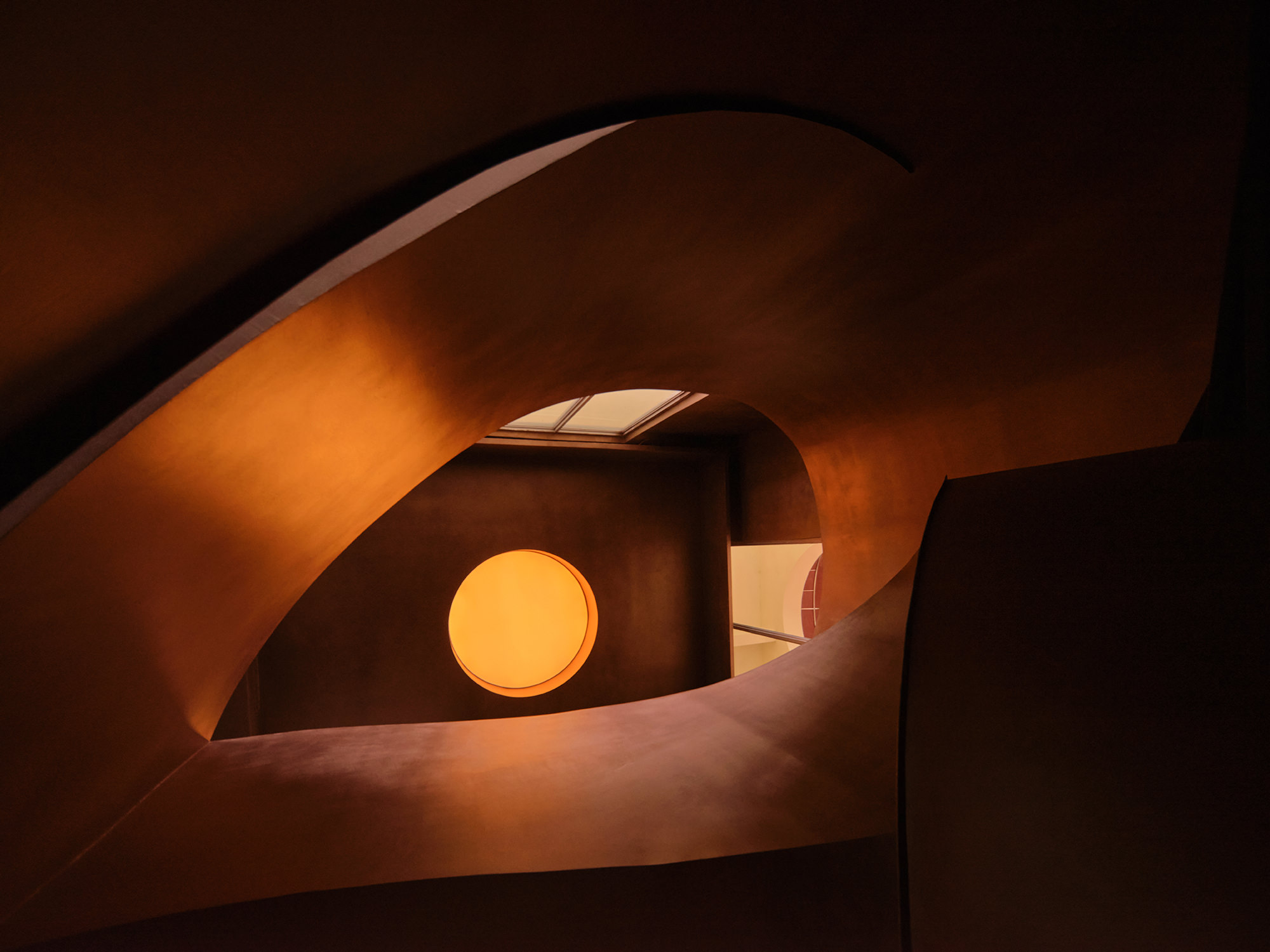 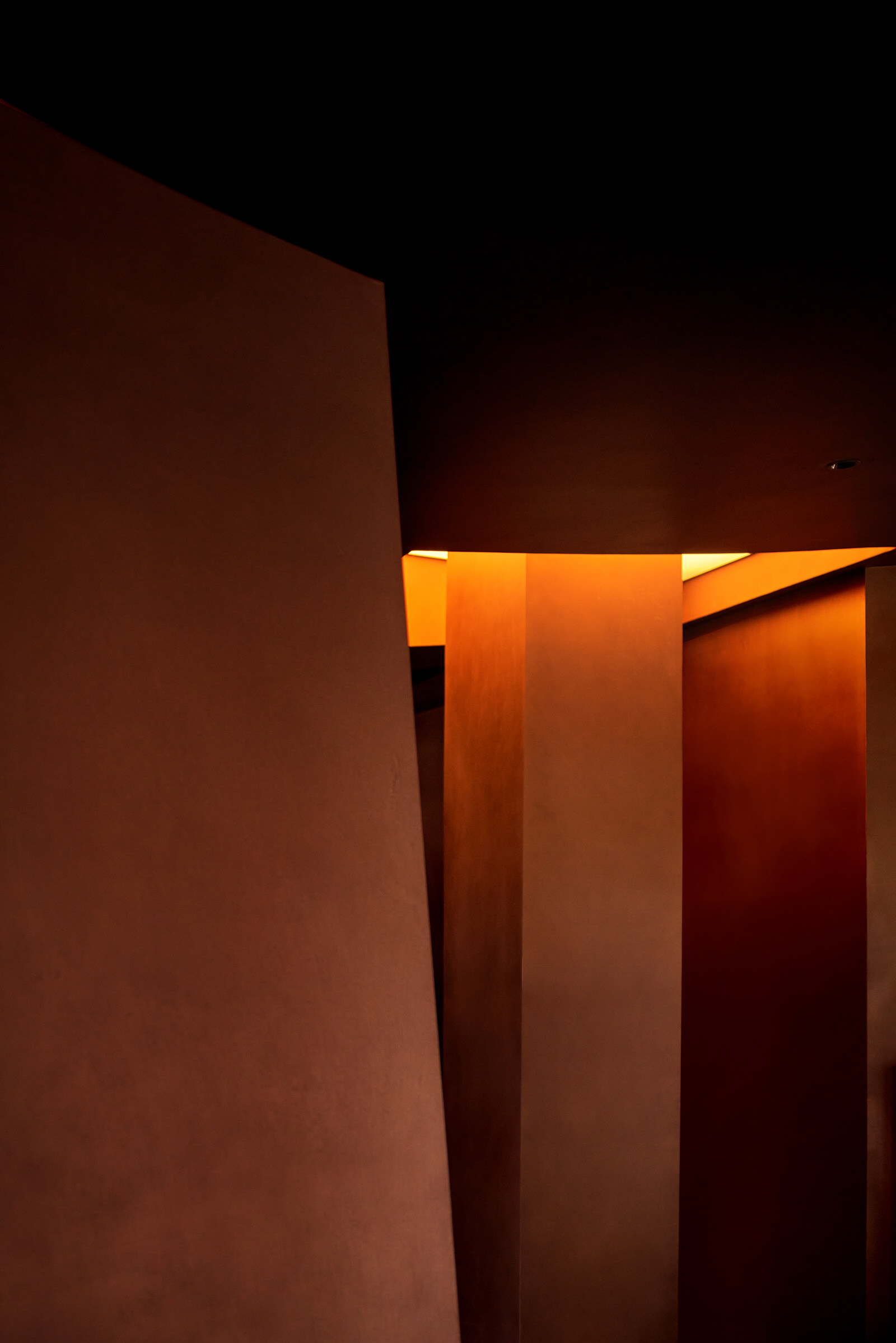 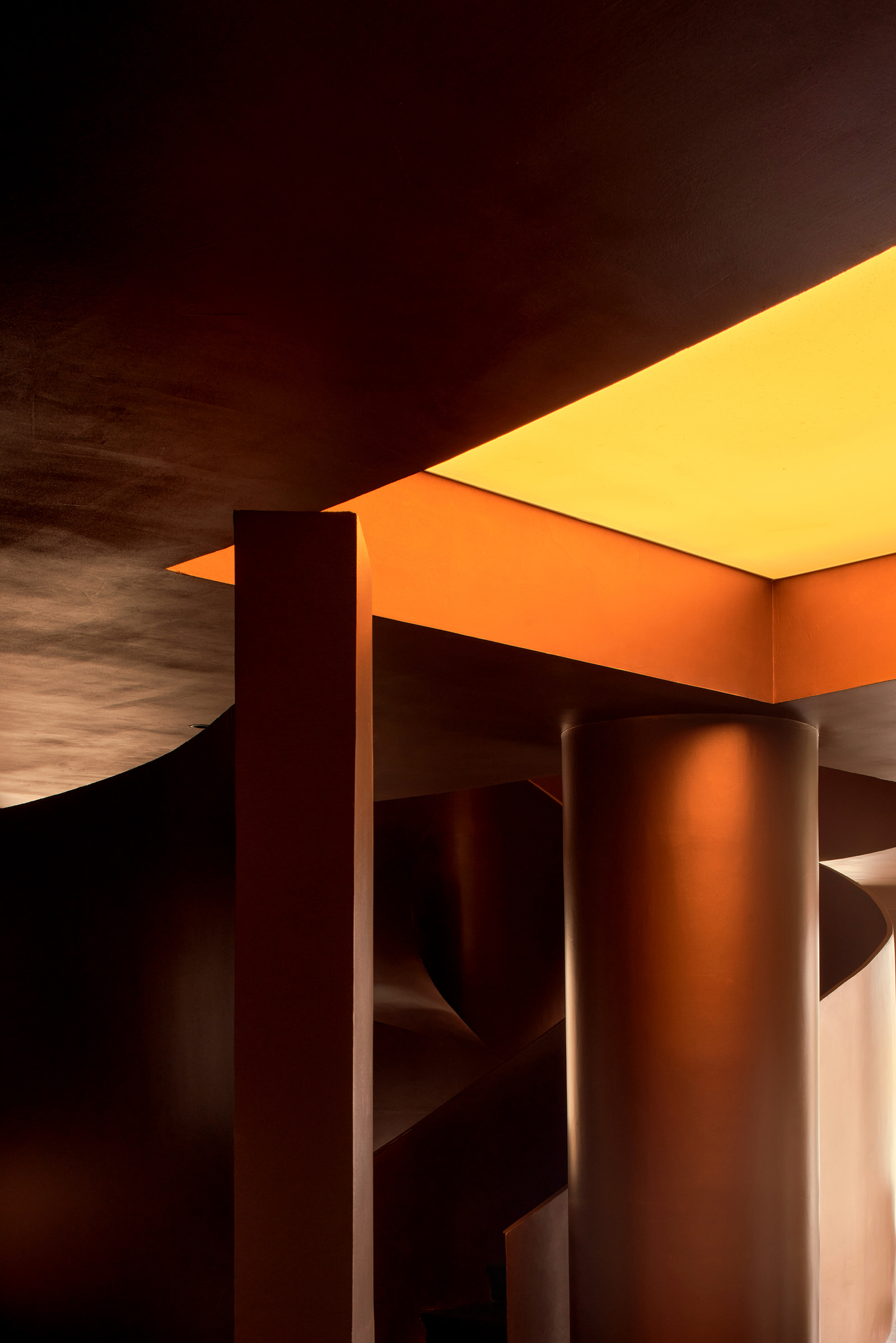 The dramatics are also saved for the central bar, grounded by a curved counter that matches the walls’ radius and softly backlit by the same honey glow. Even though daylight floods into the space, the layering of the walls within allows for a sense of chiaroscuro moments when standing from afar, further adding depth and character to the space.

A moody interior AD Architecture has served on a platter (see what I did there?); Black Diamond strives not only to target the audience’s emotions, but subtly shifts the individual sensory experience that “people can find themselves and leave their stories here”.

Drunk on Materiality: Inns Whiskey Bar in Chengdu, China by Wooton Designers.
Behind the sleek and mysterious entrance on an unassuming street in Chengdu, China an absorbing whiskey bar transports visitors to the inside of a copper still. Sinuous walls and curved arches in amber hues engulf patrons in the cavernous interior…