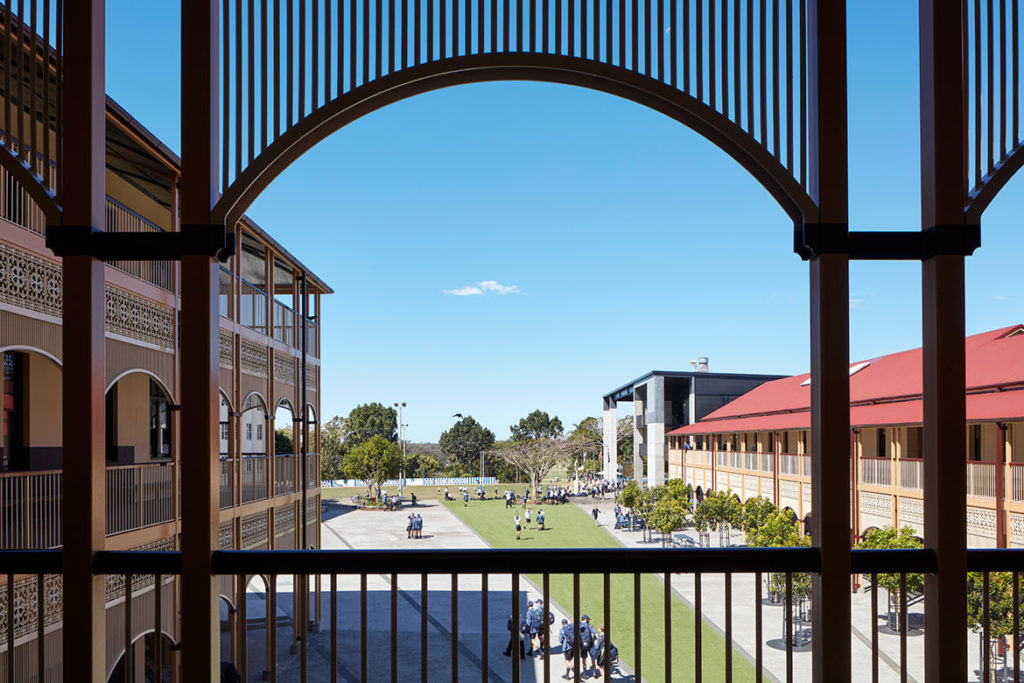 The restoration of St Joseph’s Nudgee College’s heritage listed Treacy Precinct really is something special. Years of unsympathetic renovations had stripped it of its character and its circa-1891 U-shaped configured buildings had been left largely abandoned.

In the process, the Brisbane-based practice transformed the historic Queensland site to its original appearance, while also updating the interiors to deliver modern learning environments.

As m3architecture director and project lead Ben Vielle explains, “We were able to identify the physical aspects of the Treacy Precinct that had been lost over time through careful archival research. And then it was about trying to find new ways of rediscovering these physical aspects, whether via the form of the buildings or their function, in order to basically bring the precinct back to life.”

The project spanned well over 10 years and involved the removal of the Gallagher Building addition that cut off important campus connections, along with the uncovering of Mary’s Tower, which had been largely concealed with concrete.

Visual and physical connections through to the adjacent Chapel and Ross Oval and its heritage timber grandstand were returned and light once again pours into the tower’s stunning internal stairwell.

Vielle and the team also created social spaces for gathering in Edmund Rice Mall, which features paving that radiates from the base of Mary’s Tower, and can be used for functions and events with the help of a custom-designed marquee.

“With any heritage work, it’s about balance – a contemporary interpretation of what heritage form and heritage fabric is,” says Vielle.

“So we looked back at photos from various eras and made decisions about what was important. We asked ourselves, what was of value and what was it from a particular era that made the precinct valuable.”

Emphasis was placed on reinstating the buildings’ original cream and burgundy colour palette and on returning the heritage form of the verandahs. The result is light and fresh, lending the overall scheme a strong visual statement as well as an openness conducive to today’s current pedagogies.

Internally, 10 new classrooms were added, along with new spaces for staff, a health centre and the College Museum.

Bringing people back into the precinct was a priority and by having the teachers’ offices all in the one place (the first time in the College’s history) collaborative practices are encouraged, while staff morale has been given a boost.

The collegial atmosphere underscores the focus on community and also speaks to the involvement of the school body itself in the project’s restoration.

“It took the support of the whole College community to continue with the decision-making over a long period of time,” reflects Vielle. “Collectively they all believed in it and in the importance of this place for the community.”

Certainly, m3architecture has dignified the College’s greatest architectural – and community – asset with a visual treat of a restoration that’s simply an outstanding study in heritage conservation.