Dubai is already one of the world’s most futuristic-looking cities, but if a new concept by gets built, it’ll officially edge into sci-fi alien planet territory. The firm proposes encircling the Burj Khalifa and several other buildings with , an enormous floating megastructure that would function like a gated community in the sky. The project represents an exercise in creative problem-solving, boosting density in a highly-populated urban center while retaining the qualities that make the city feel livable. 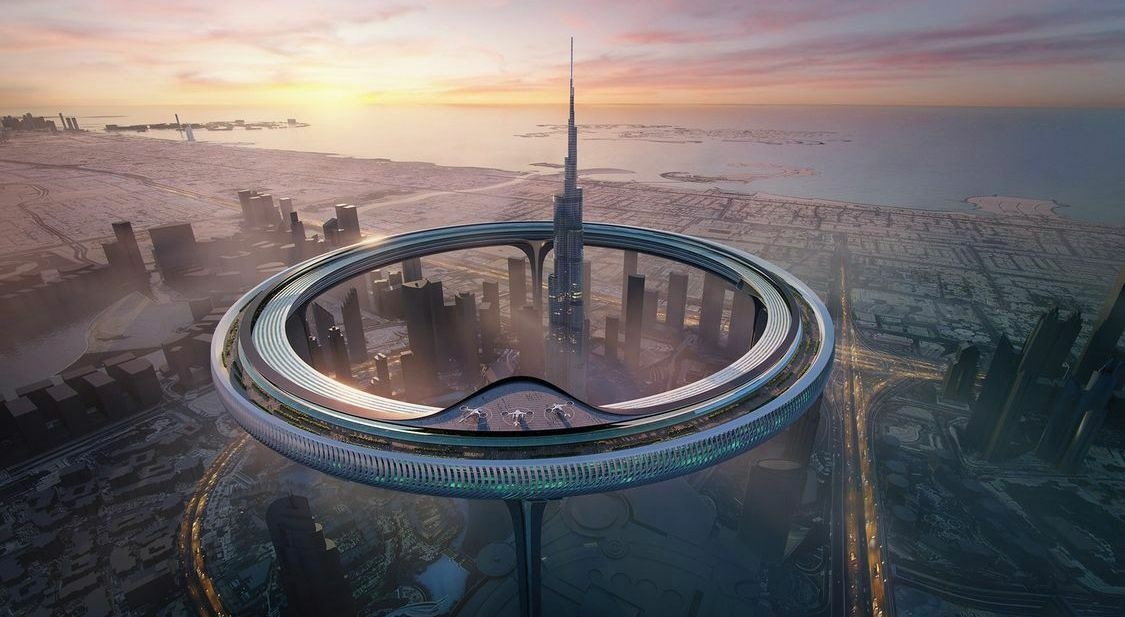 ZNera Space sees the Downtown Circle as sustainable and self-sufficient . The mega-complex stands an incredible 550 meters (1,804 feet) off the ground on five relatively narrow supports as an alternative to a bunch of unconnected skyscrapers. Containing housing, retail stores, offices, and schools as well as public spaces like parks and museums, the ring-shaped tower even has its own transportation system. Theoretically, residents wouldn’t ever have to leave the tower if they didn’t want to. 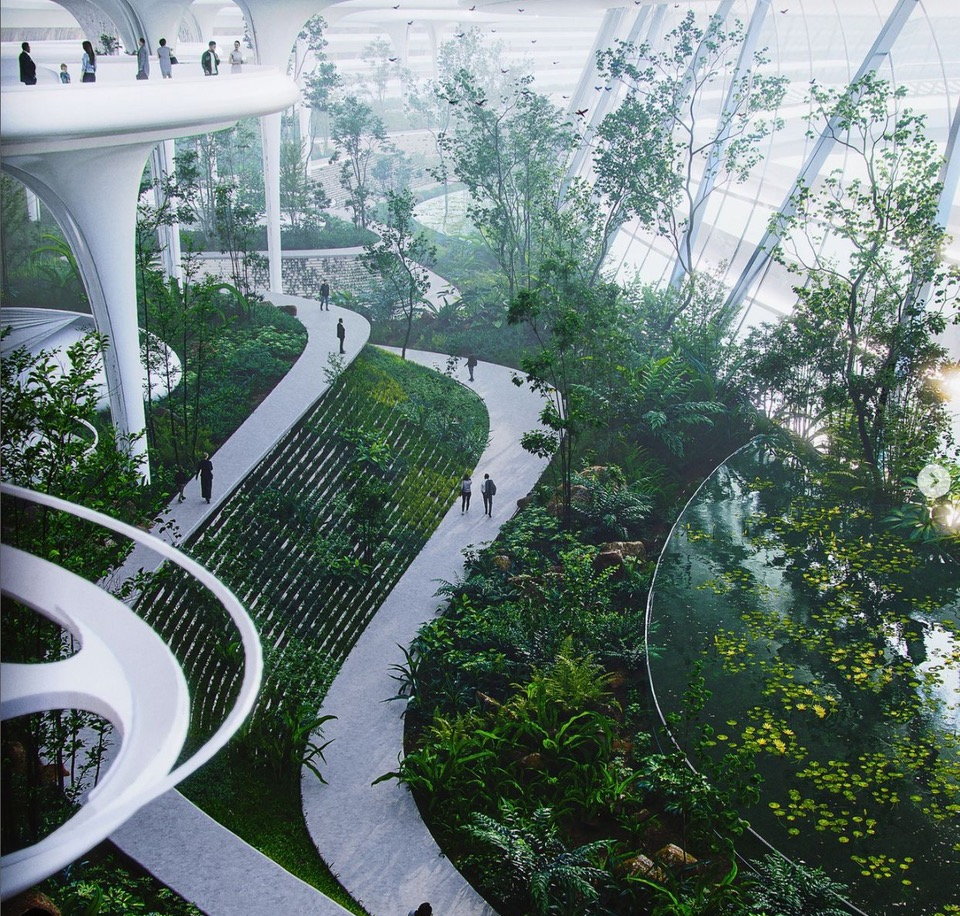 Downtown Circle contains five levels, including two main rings held together by a continuous green belt the architects call Skypark. Spanning the multi-story vertical space between the structure’s two rings, the Skypark is its own self-contained ecosystem full of swamps, waterfalls, canyons, sandy dunes, and tropical vegetation. It also incorporates rainwater harvesting, solar power, and agricultural production, so the community can grow some of its own food and produce its own energy. And with full-size trees capable of storing carbon, the Skypark also helps to offset the ring’s greenhouse gas emissions. 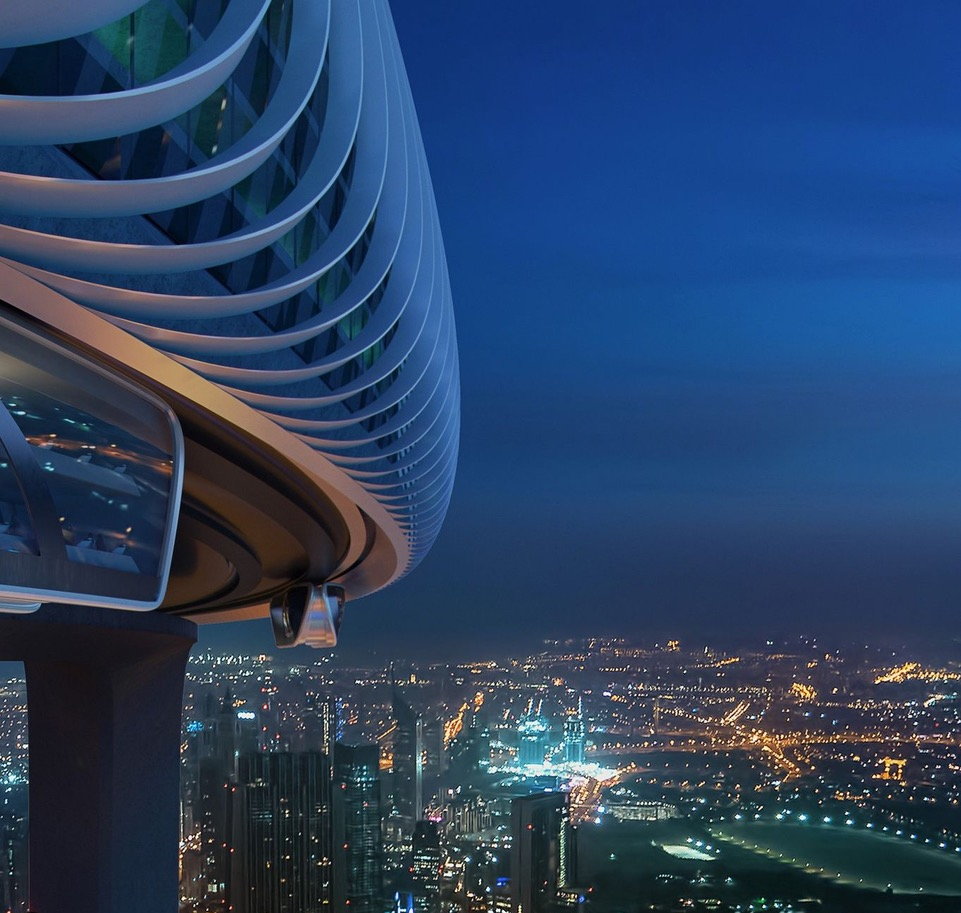 To get around the ring, residents and visitors will travel in a fleet of suspended peripheral pods that transport them from one node to another. The vessels follow tracks along the structure’s bottom tier. An elevated heliport on the roof of the inner ring lets inhabitants travel down to the city and back up again. An outer layer of louvers protects the facade from intense sunlight and helps reflect light to areas that get shaded by the geometry of the building throughout the day. 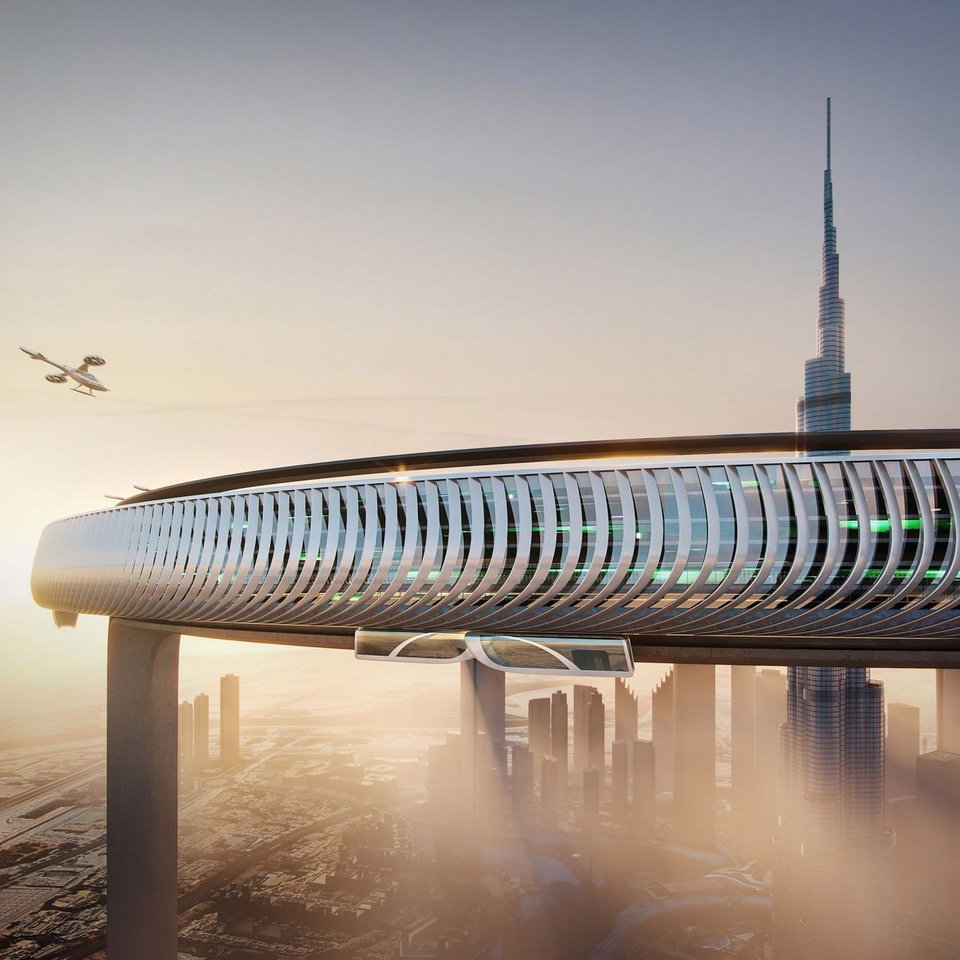 “We wanted to go down to the basics of how gated communities were established as a very horizontal built environment,” says Najmus Chowdry, co-founder of ZNera Space. “But you can’t have that here because of the dense urban fabric of Dubai. The best way to explore and practice this concept was in downtown itself.” 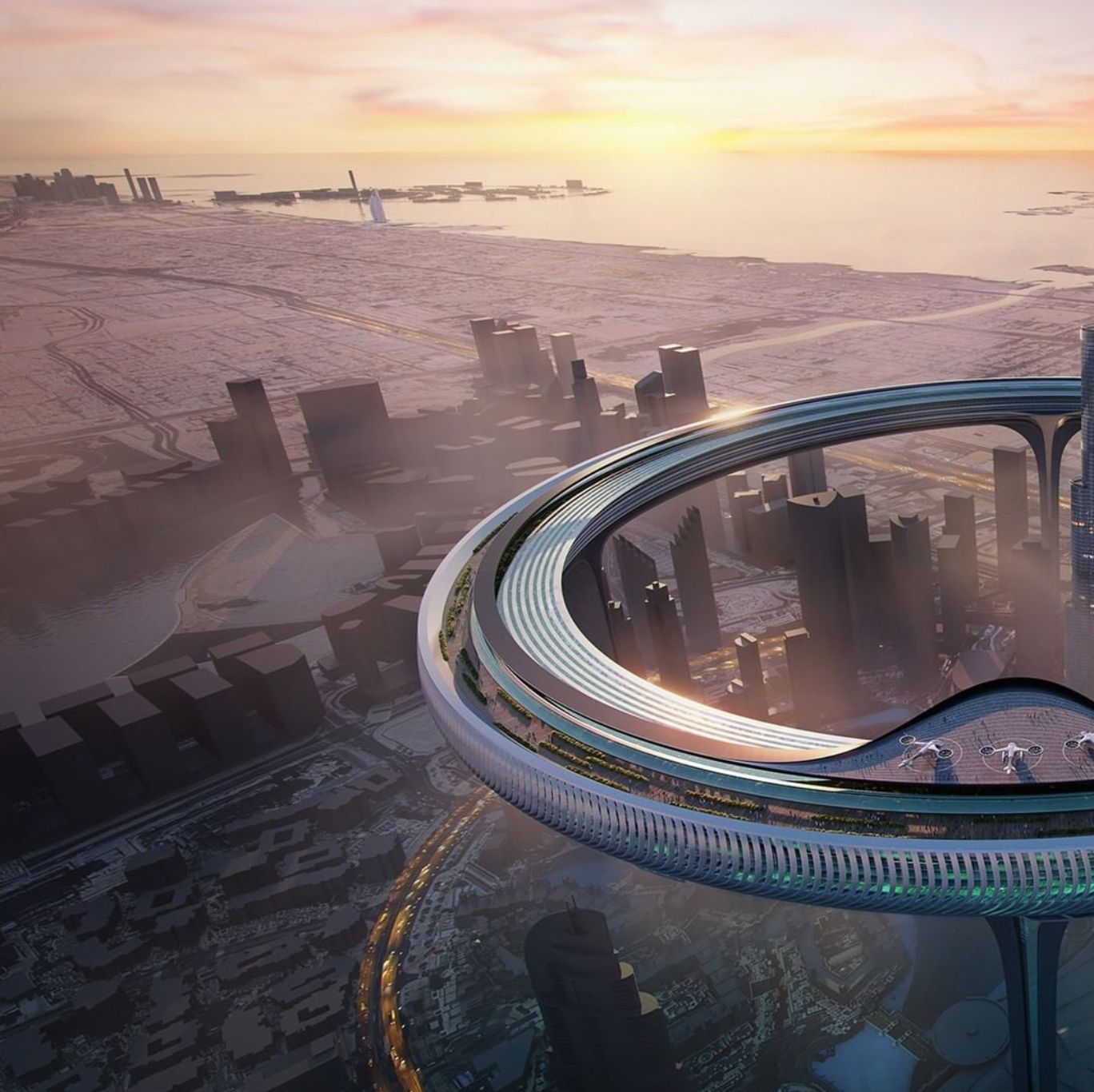 “The concept was of a vertical city,” says Nils Remess, the firm’s other co-founder. “When COVID-19 hit hard, we thought a lot about sustainability and how can we change things and how we can create better . We looked at aspects such as garbage disposal, food production, traffic problems, and pollution. We put all these things together and came up with a concept.” 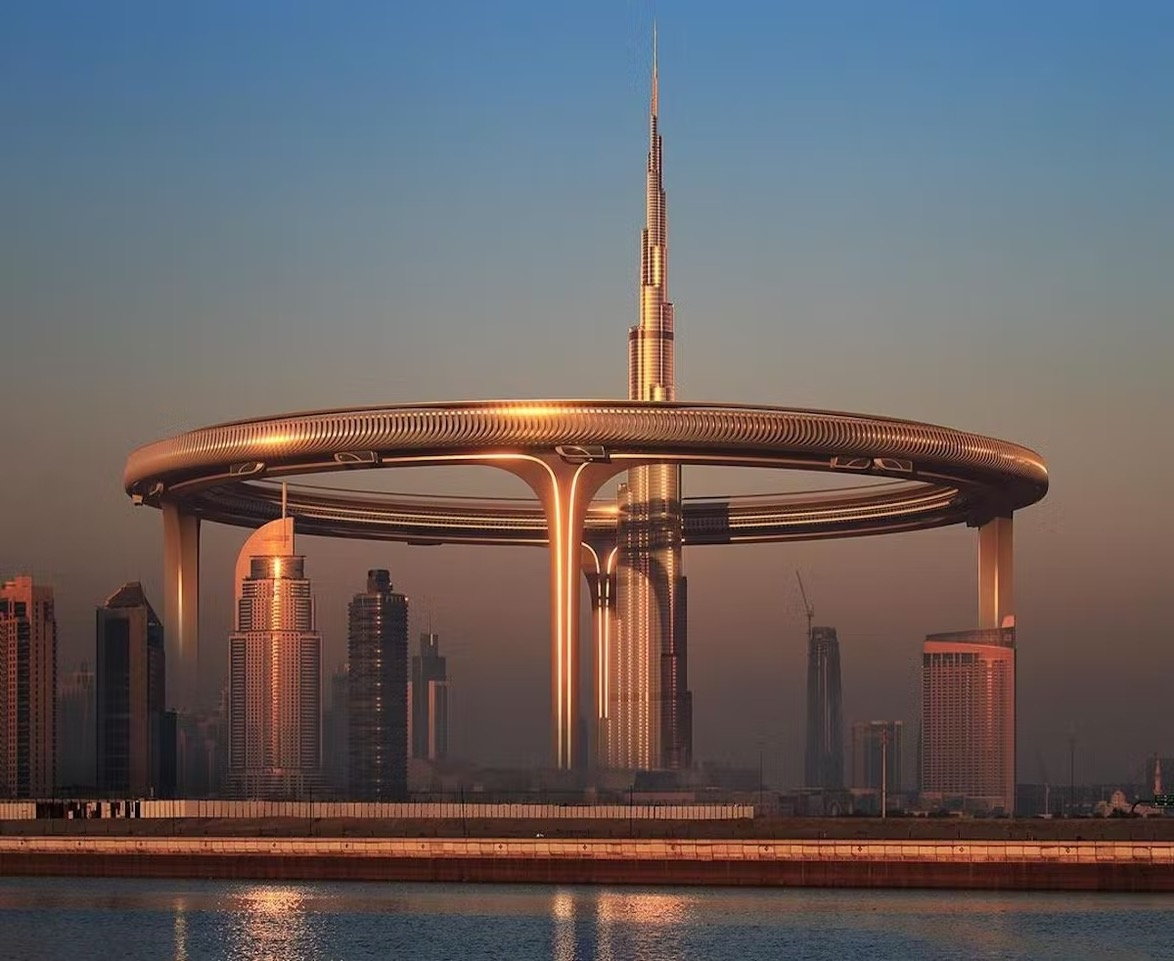 Concepts like the Downtown Circle could definitely help with the challenge of packing more people into cities as the global population continues to grow amidst the threats of climate change. One thing few of them seem to address, however, is the question of whether such structures would contribute to further segregation of economic classes within cities, leaving poor residents on a ground level that would feel downright subterranean when shaded by megastructures that elevate richer people into the sky above. In that case, higher-density cities will only feel livable for some people and not others.