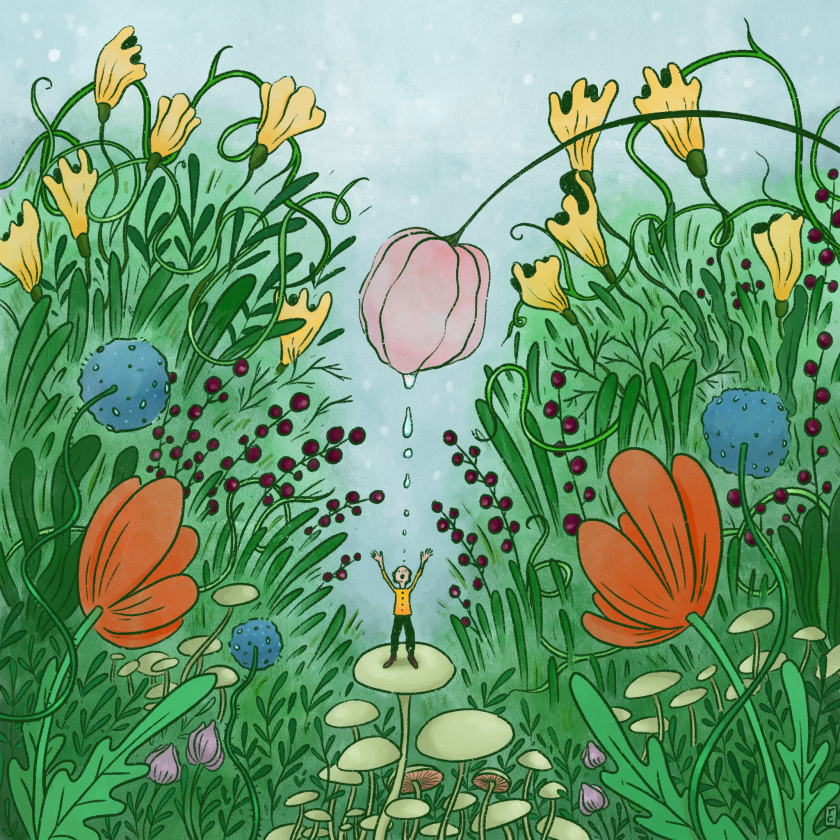 Elusive snippets of everyday life are captured forever in the beautiful works of animator, illustrator and comic maker .

A towering trail of umbrella-like lily pads. A beach composed of pebbles with sombre faces. A landscape dominated by huge flowers that dwarf tiny people. These are just some of the amazing images conjured up by Rhe Civitello in her beautifully realised illustrations and animations.

With a mum who worked as a children’s book illustrator and a dad who worked as an architect, Rhe’s artistic career might appear to be a certainty on the surface. Indeed, Rhe explains that drawing has always been a way of playing out what was going on in her imagination: “When I told myself stories, I brought them to life on the page.” 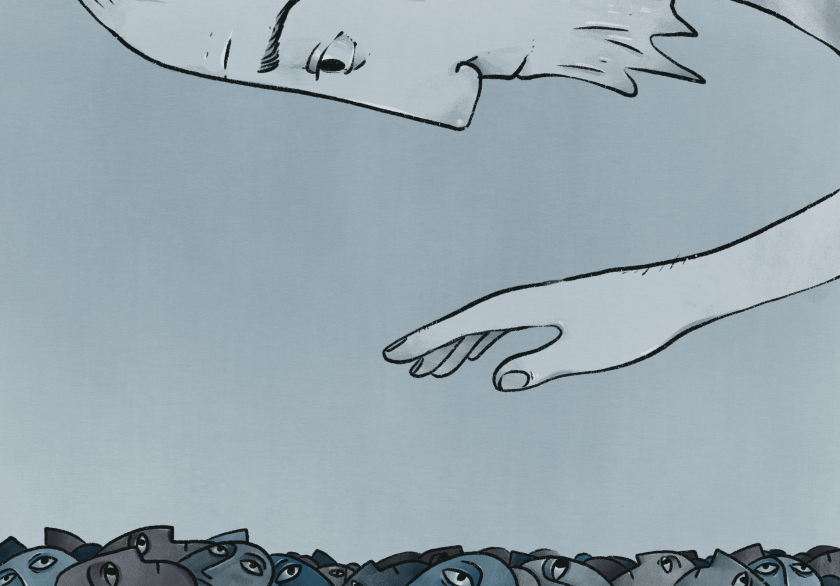 However, her creativity found a different outlet through high school. Having initially intended to study art in college, she followed her other academic interest and graduated with a double major in English and French. But the lure of the arts proved too strong to resist.

“After graduating, I worked in various non-art-related fields that helped me to build a professional skill set but also pushed me to realise I wanted to do more creative work,” Rhe tells Creative Boom. “When I discovered motion design, it felt like an exciting way to bring illustration to life and lift visual storytelling to another level.

“I ended up getting a certificate in motion design from Gobelins, l’école de l’image in Paris, and have been working in various forms of illustration and animation since I completed the program.” 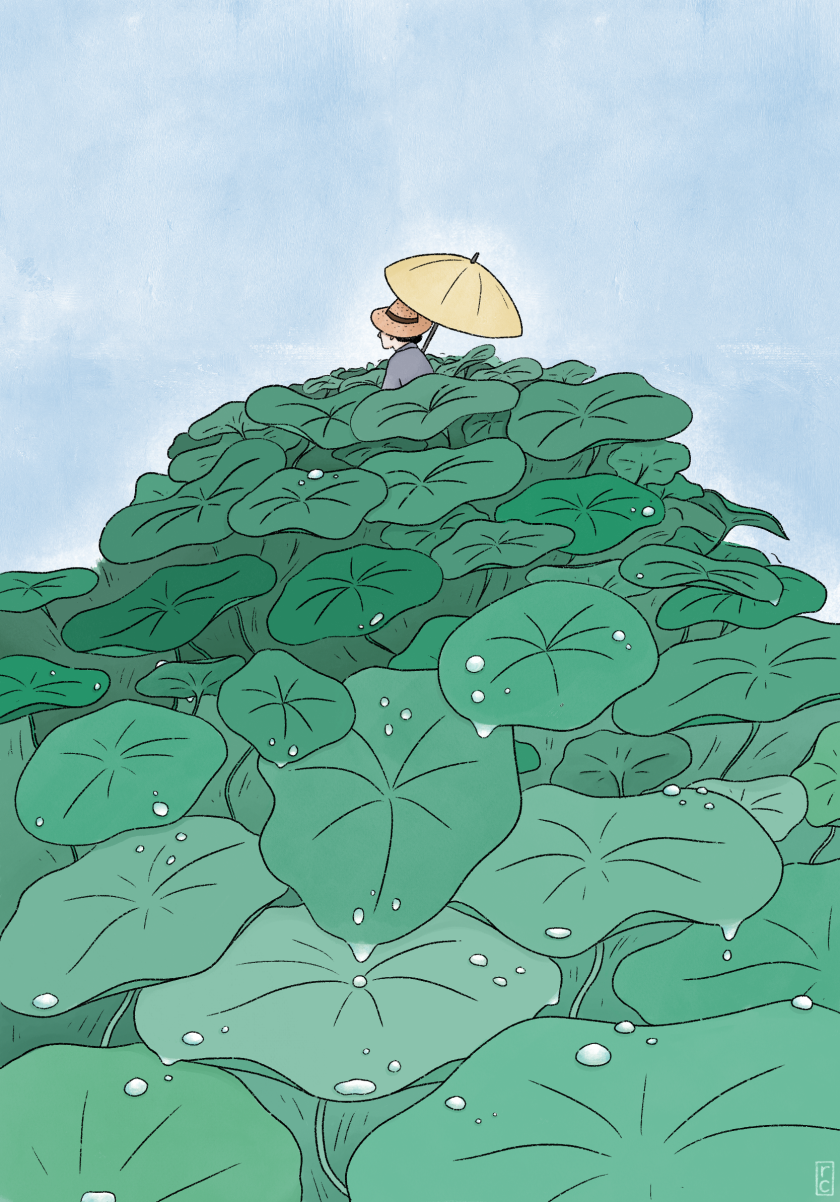 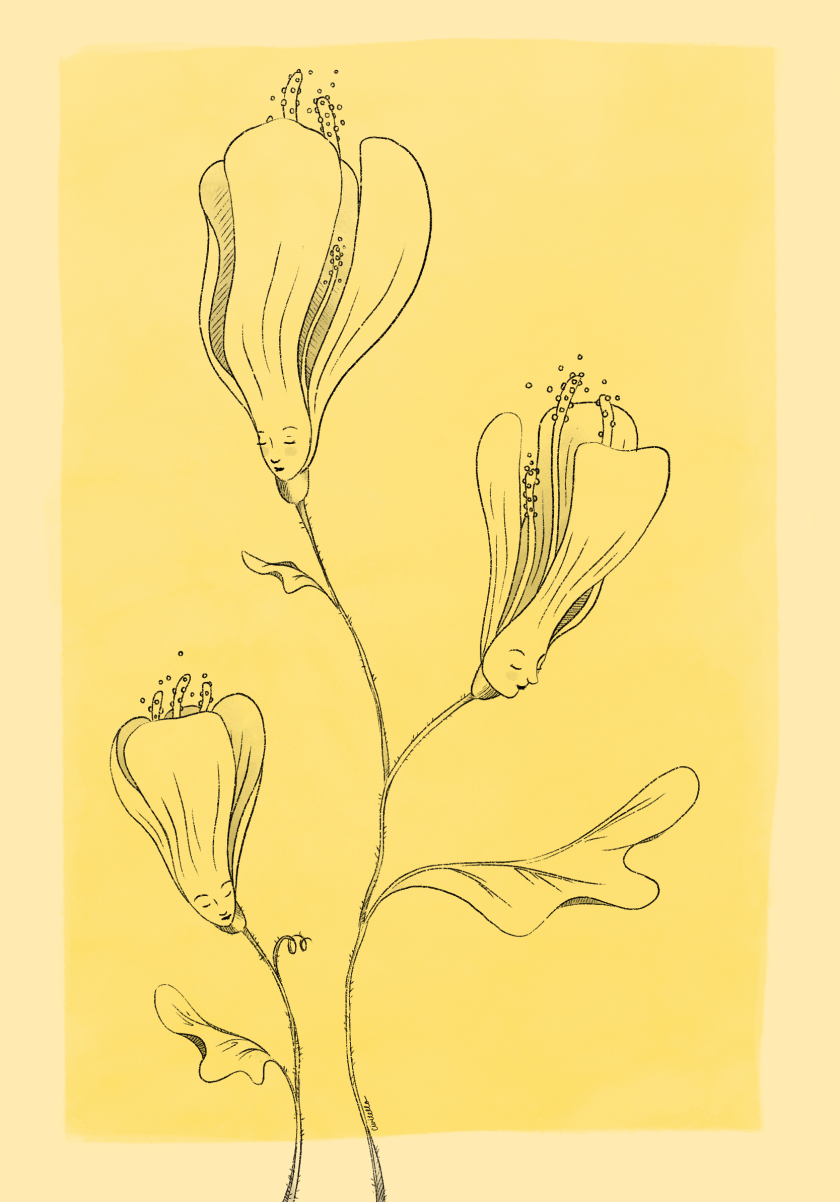 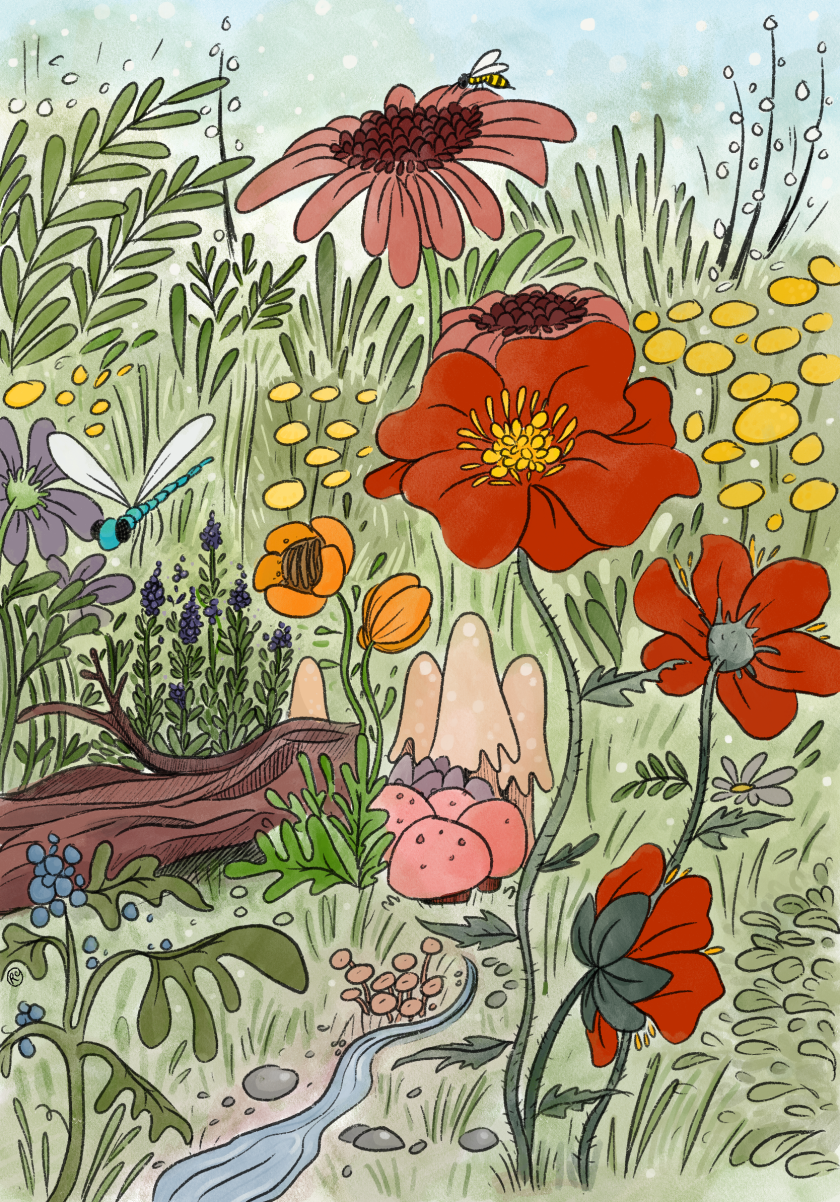 Having achieved her degree in 2022, Rhe still sees herself as a beginner in the industry. Yet she’s already created a diverse online portfolio showcasing her talents. Her work ranges from exquisite, delicate illustrations of flowers and people to moody comic book panels picked out in shadowy hues. But what are the artistic inspirations that knit her work together?

“So many artists and illustrators inspire me,” Rhe explains. “Jillian Tamaki is one of my biggest artistic influences. There’s so much movement in her art. Nothing is static on the page. The gestural nature of her work makes her drawings seem so cathartic as if she can’t help but let them burst out into the world.

“I also love Karlotta Freier’s dreamy, imaginative work. Each piece feels like a moment taken from a larger story and has unique and whimsical humour.

“Books I read as a kid, like the Brambly Hedge series by Jill Barklem and Lisbeth Zwerger’s Thumbeline, also had a lasting impact on me in both their magical, nature-centric subject matter and artistic style.” 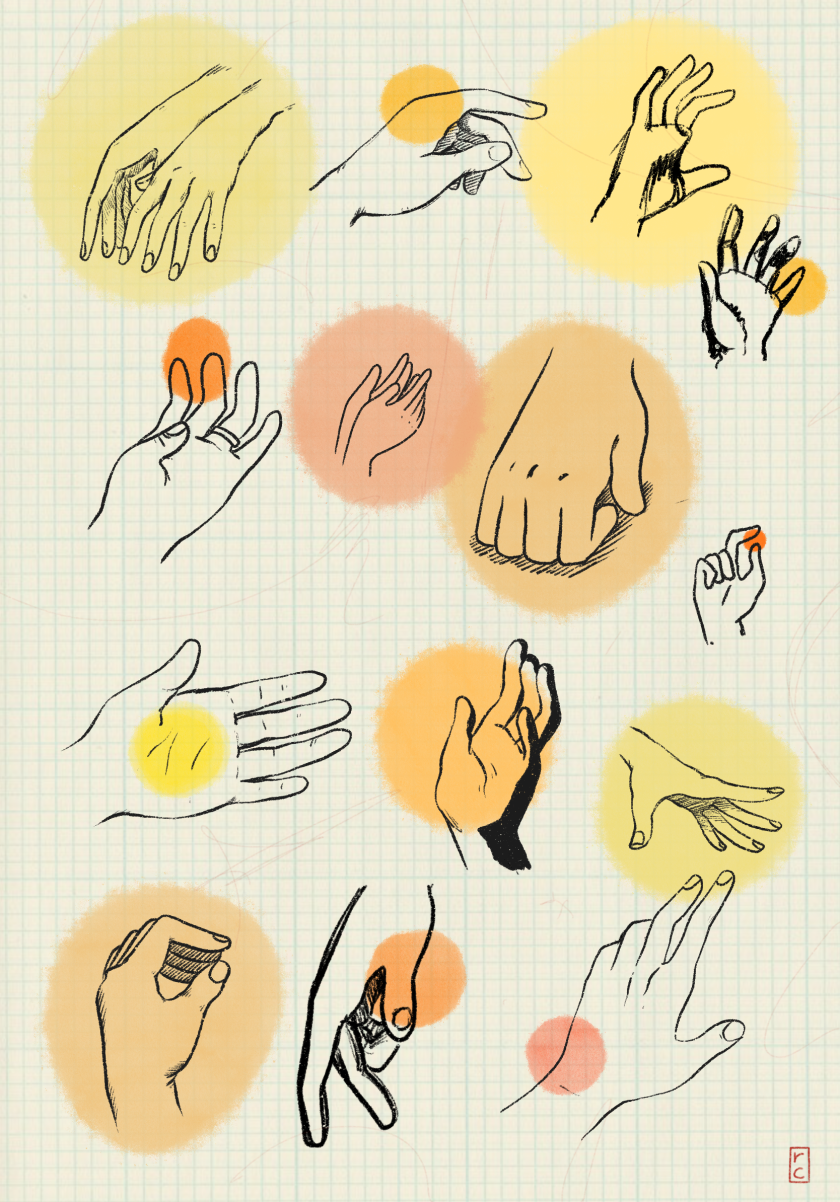 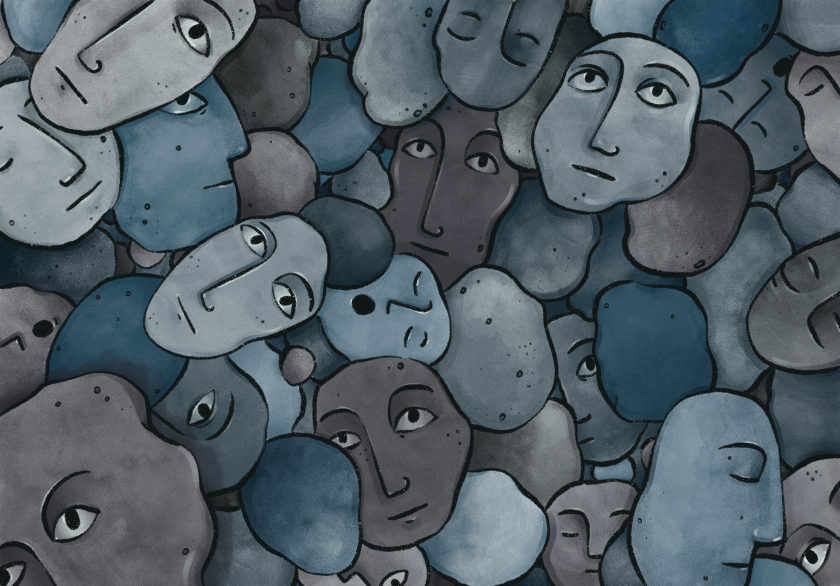 The influence of nature is impossible to overlook in Rhe’s work. Stemming from when she was little, her interest in the natural world is rooted in her childhood spent playing outside and her obsession with fairies. She even adds that she would build tiny houses out of sticks and imagine what it would be like to explore her backyard if she were the size of an ant.

“Nature continues to spark my imagination,” she adds. “Even as an adult, the natural world feels full of magic. Nature embodies everything I’m interested in exploring artistically, in the range of emotion it conveys and the poetry of the lines and shapes it contains.”

As well as nature, Rhe aims to tell stories through her art and create a sense of character or emotion. “Often, I’ll draw something with a story in mind to flesh out the image in my imagination,” she reveals. This approach is plain to see in images such as a spread of tender flexing hands and a giant bending over to pick up a tentative-looking pebble.

“I keep notes on my phone with ideas that come up and will sometimes reference that as a source of inspiration,” she adds. “My process for creating animations is more consistent from project to project. Once an idea has formed, I follow a more orderly progression from creating a storyboard to an animatic, and eventually the final animation.” 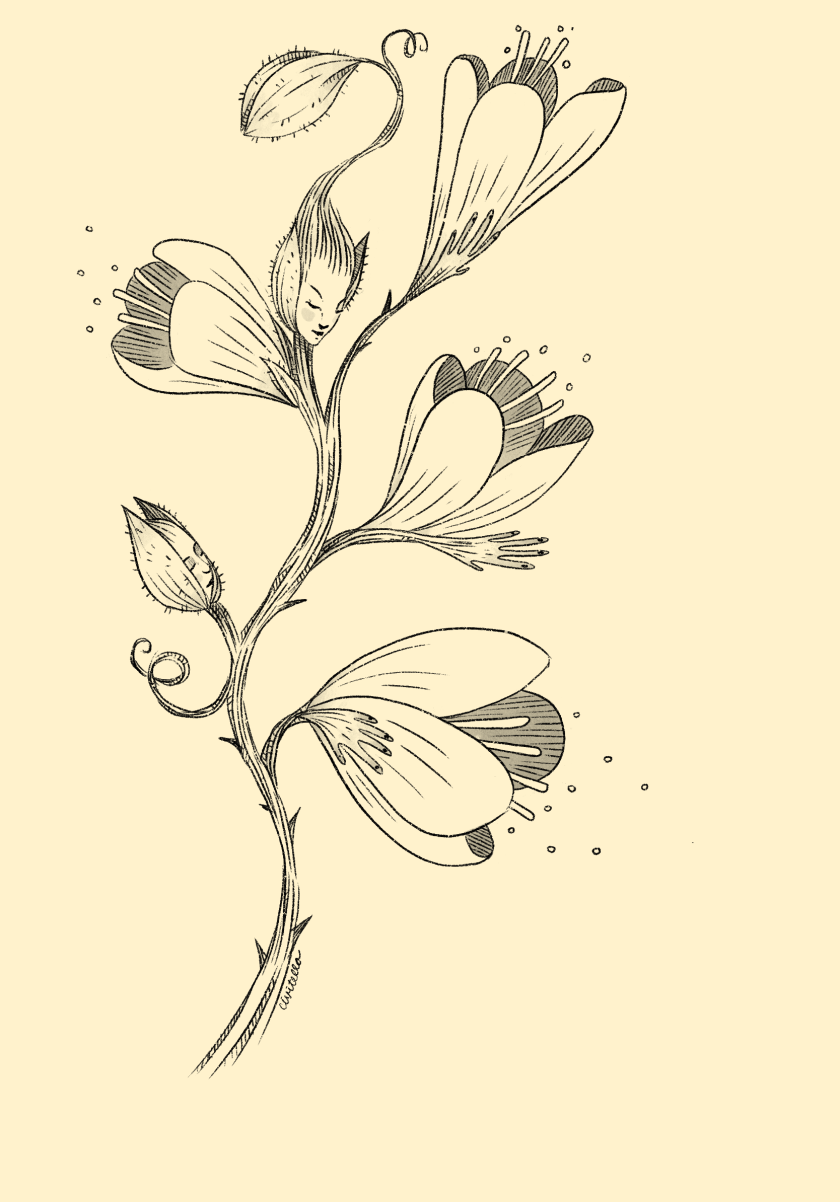 Last year was a big one for Rhe as her motion design degree opened her world to the possibilities beyond static imagery. And in 2023, she hopes to deepen her skills, do more visual narrative work, and meet more people in the creative community around her. But what advice would she give to artists following in her footsteps?

“I would say: it’s never too late to pursue your creativity. Follow your interests, even non-art related – they’ll all play into building your unique path and will influence and add to your artistic perspective.

“Write down things you see in your daily life: on the subway, in cafes, something you see while walking down the street. These snippets can be good ideas for drawings or comics later on. We think we’ll remember these little moments, but they’re so easy to forget. If you notice something that sticks with you, it’s worth recording – you might find deeper meaning in it later.”