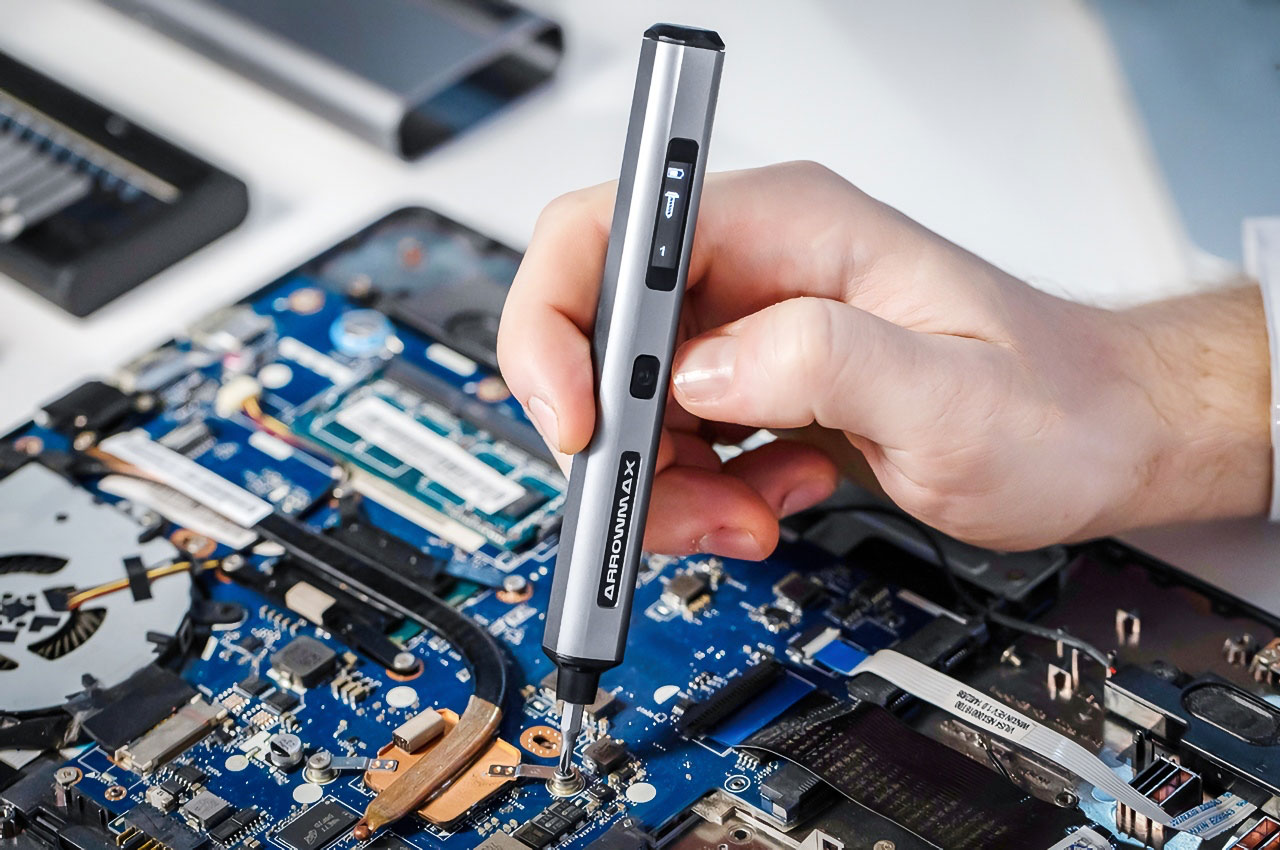 What do men like? It seems like such a simple question, but we honestly don’t have a single straightforward, satisfying answer. Everyone’s different, and it’s nice to celebrate your individuality. Some like the outdoors, some like cars, others like watching or playing games, heck some are tech nerds too! Keeping that in mind, we curated this Men’s Gear Gift Guide to be as literally diverse as possible! This veritable smorgasbord has everything someone could like. A smartphone stabilizer, a portable off-grid power station, an AI-powered chess set, a surveillance robot with night-vision, a TV-time snacks organizer, and the most versatile and powerful measuring instrument ever made! We don’t like boxing ourselves in tight categories, so this one’s designed to be as broad as possible too, catering to outdoor freaks, tech nerds, EDC junkies, and even people who occasionally like to unwind in front of the television and watch the game…

Bringing in the right tools for the job is the first step in getting a job done. While the hardware tools department has always been flooded with individual pieces catering to a partial problem, the SES PRO electric screwdriver brings an arsenal to your toolkit in a package that solves the problems we faced till now. Armed with built-in shadowless lights, an internal motor with 5 modes of torque and a screen that keeps you informed on the screwdriver’s turning direction – this tool will always be handy. The screwdriver’s design mimics a pen, helping the user hold the screwdriver better and in a very intuitive gesture, the screwdriver follows the direction of your wrist. Given its size and its utility, you can call the SES Pro a mini drill focusing on assembly, disassembling and fixing your gadgets and hobby activities. With the 34 replaceable bits that accompany this, the SES PRO helps you be the DIY pro at home.

Meet the one device that can replace every single measuring tool you own. Designed to be small enough to fit into your palm, the MEAZOR 3D can measure linear distances, curves, angles, convert measurements, store measurements, and the best part, 3D-scan interior spaces to create instant floor plans. The 6-in-1 device comes with a laser gauge that instantly captures linear distances up to 131ft or 40m away, while a rolling wheel built onto the rear of the MEAZOR 3D helps cover non-linear distances, allowing you to capture curves. Sitting between the two is MEAZOR 3D’s circular touchscreen which lets you view metrics in real-time, switch between units, and even access the device’s built-in digital protractor and spirit level. However, that isn’t MEAZOR 3D’s most impressive feature. It can scan 3D spaces, calculating floor-plans in just minutes, doing a much more accurate job than other devices. Moreover, the MEAZOR 3D device also tracks its own position, knowing where it’s kept in the room so you can move from room to room with it, while the device automatically factors wall-thickness into your blueprints! All your measurements get saved on-device and can be exported to your smartphone too, allowing you to directly work with vector blueprints to rapidly boost your workflow!

If you love a Netflix binge-watching and snack-hogging session and often spill your snacks all over your couch, then the CouchConsole is the product for you! It perfectly balances your chips, drinks, and your remote. Couch Console’s core pillars are simple geometry and clear functionality. The main attraction is the cupholder with a mechanical gyroscope with a counterweight that ensures your drink stays still even on uneven surfaces – you don’t have to sit upright anymore, so get comfy! The cupholder’s size fits most glasses and even comes with a lock for added security. The console comes with a nifty little compartment that holds your knick-knacks out of sight. There’s also a nifty compartment to hold your glasses and cups, as well as a snack holder, phone stand, charging dock, and remote tray – everything you could ask for and need for the ultimate Netflix marathon!

The imprint Ray and Charles Eames have had on the design movement in general is difficult to measure. The designer couple is responsible for some of the most iconic products that shaped how people lived in the 50s-60s, and remain recognizable even today. Marking the design duo’s invaluable contribution to the world, the Eames “Hang-It-All” Playing Cards celebrate their famous, eponymously named wall rack. The Hang-It-All rack, designed in 1953, shattered the notion that a wall rack had to be utilitarian. A rather modernist take on the rack, the Eames’ redesign was playful, sculptural, and questioned tradition with its unique design comprising multiple colorful spheres connected by bent metal wire. The playing cards mimic that same design language by questioning why cards look the way they do and how they can be made to look different. The cards take heavy inspiration from the De Stijl and Bauhaus movements, which informed Ray and Charles’ own design philosophies. The cards showcase a jubilant color palette of the 50s, and ditch the boring king, queen, jack motifs for colorful balls and sticks (like the wall rack). The cards count from 1 to 13 as a way of uniquely representing the ace, numbers, and the royal figures. A perfect gift for the design enthusiast!

Here’s a travel carry kit that lets you travel in style! Meet the ‘Bottle Flight’ by Aged & Ore, a 4-piece kit of tiny travel-ready bottles to carry your favorite alcoholic spirits in! The bottles come crafted from glass, with a silicone sleeve around them to protect them from clinking against each other as you travel. Each bottle has a wide mouth for easy filling and a max capacity of 3oz as per TSA guidelines, giving you the ability to carry as many as 4 of your choice spirits with you as you travel, because we all know how expensive and shoddy those on-flight booze menus are! The Bottle Flight kit comprises 4 bottles that fit snugly into a soft-shell EVA case, with extra space to store 2 cigars too. The bottles remain secure thanks to their silicone outer sleeves, and each glass vessel also comes with a labeling window so you can label your liquor, or identify your intoxicant, if you will! Yes, there’s a glass marker included with each Bottle Flight kit!

To celebrate the company’s 10th anniversary, Jackery is announcing its biggest-ever discounts, including on its flagship Solar Generator 2000 Pro, a power station and solar panel combo that’s both portable and powerful! With an output of 2200W AC and a peak output of 4400W, the Solar Generator Pro can provide juice to anything from your refrigerator and air conditioner to even your e-bike! The power station has a built-in 2160Wh battery that can charge as many as 8 devices simultaneously, providing up to 2 days of power for your outdoor trips. Want to extend your stay? Well, the power station comes with its own portable solar panels that let you set up your own electrical grid in no time, no matter where you are! The solar panels charge the station in just under 2.5 hours, and if you’ve got an AC outlet handy, you can juice the power station in just 2 hours instead. Or just go ahead and plug it into your car port to juice the battery when all else fails! Designed to be portable, wireless, and quiet, the Solar Generator 2000 Pro is perfect for outdoor trips, backyard parties, or even as an emergency backup if your area is prone to power outages. Jackery is also announcing its biggest Crazy Monday Giveaway in partnership with Black Series. Head down to their website for a chance to win prizes up to $250,000!

Little did Isaac Newton know that his discovery of gravity would help mankind take crisp, stabilized smartphone videos! Designed to work with almost all smartphones and action cams, GravGrip

is a hydraulic, battery-free stabilizer that uses gravitational forces to help you shoot perfectly jitter-free videos. The fact that it doesn’t have a built-in motor and batteries makes the GravGrip compact, waterproof, and affordable! The way the GravGrip works is using a patent-pending hydraulic stabilization system and a weighted camera grip to keep your camera holding its position. The hydraulic stabilizer can be engaged or disengaged to give you control over your footage, and the weights underneath the camera/phone mount can be height adjusted and even angle adjusted to make up for an offset center of gravity. The GravGrip can then be mounted onto tripods or selfie sticks using its standard 1/4-inch tripod mount. It works with almost all action cameras as well as phones (even plus size models) and lets you mount devices with cases or even additional camera lenses!

The BioLite FirePit+ is a smokeless wood-burning fire pit that cooks your meals for you and provides you with a front-row seat to glimpse what’s happening within the fire. It doesn’t use a chemical fuel or a gas to create the perfect fire, it uses standard wood mixed with a touch of clever engineering; by injecting air through 51 air jets, the temperature is far more uniform throughout the fire-pit, this in-turn ensures for a dramatically improved combustion! The air is provided by a fan that is located within the USB-rechargeable powerpack; not only does the fan provide more efficient combustion, but it also offers control over the fire’s intensity! The FirePit+ is a better bet than other typical campfires because the smoke you see coming off of them is unburnt fuel – it gets on your clothes, your hair, and most importantly your lungs. The FirePit+ resolves this problem and allows you to enjoy the fire minus the smoke.

When I heard the term “most funded chess project of all time”, my mind instantly began wondering why. It’s chess, it hasn’t changed as a game in centuries… what could this project be doing differently? Then I saw what ChessUp was all about. Designed to be more than just your average chess board, ChessUp actually has a computer under its hood. The backlit board comes with timers, sensors and an AI that helps you up your chess skills and strategies. The board is the result of a collaborative partnership with Super Grand Master Levon Aronian, and just like an expert Chessmaster would help you understand and learn their strategies, the ChessUp board uses a set of backlights to show you where and how to make your next moves to win your game. Once you’ve picked up the skills needed, you can actually compete with other people or against the chess board’s built-in AI itself!

Think Amazon Astro, but better! That’s what the Moorebot Scout is. Created to be a smart surveillance robot that moves around your house, navigating all the tough spots and recording/monitoring things 24/7 with its FullHD camera with night-vision capabilities. The first thing you notice about the Moorebot Scout is its mecanum wheels. Unlike regular wheels, these unique treads give the Scout the ability to move forwards and backwards, side to side, and rotate 360° on its axis – something that most wheeled devices can’t. This, along with Moorebot’s 4-wheel drive effectively gives it the ability to navigate almost every part of your home, making its way through tough spots with relative ease. The robot comes equipped with a quad-core ARM CPU on the inside, running 1GB of DDR3 RAM and with 4GB of flash storage. Multiple sensors, a microphone, and a speaker make up the Scout’s monitoring capabilities, apart from the camera system itself. With the ability to monitor on a schedule, surveil your pets while you’re away, and even be summoned on command using Google or Alexa, the Wi-Fi-enabled Scout is a pretty nifty little security guard to have in your home. However, here’s the best part – its open-source platform allows robot-lovers and young enthusiasts to tinker with the Scout too, teaching it new tricks and giving it a variety of capabilities!