When good taste comes to town 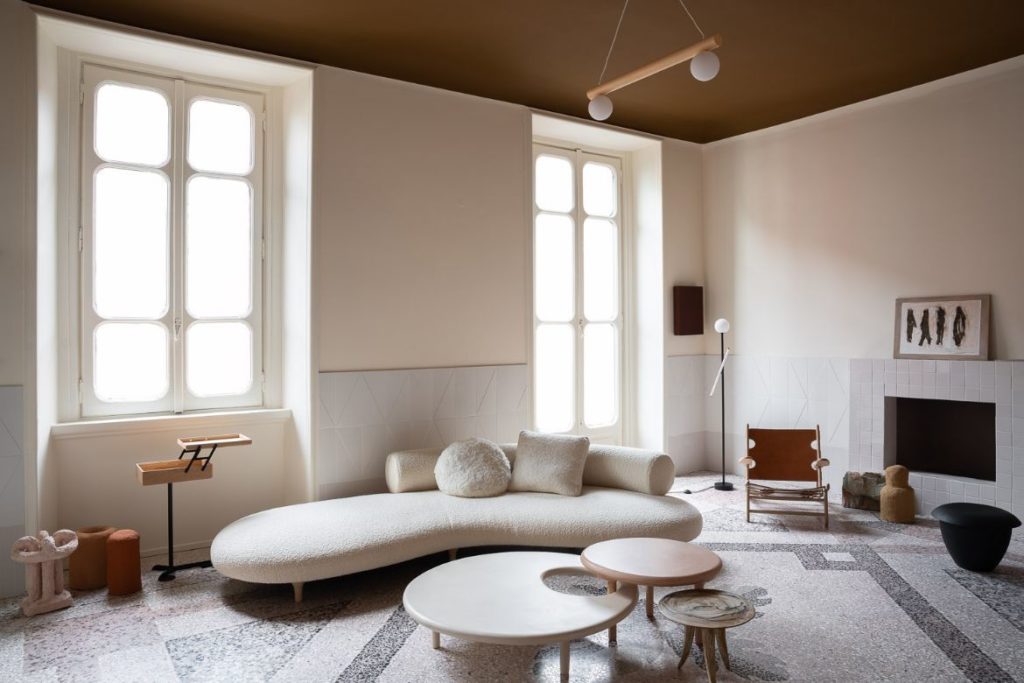 Up three flights of stairs in an 18th century building in Milan’s design district is an apartment that has a lot going on – at least 8 different kinds of tiles on our count – but which still manages to exude a calm simplicity that reflects on the art of living.

It’s a ‘gallery apartment’ by H+O, a venture between Sicilian-born, Milanese-trained architect, Elisa Ossino, and Josephine Akvama Hoffmeyer, the creative director of File Under Pop in Copenhagen. Theirs is a multidisciplinary company focusing on tiles, surface design, interiors and exhibition installations, and for the Milan apartment they have selected a beautiful array of arts, crafts, contemporary objects and iconic furniture to complement the subtle ways they’ve incorporated their tile collection throughout the various rooms.

H+O hosted an open-house in the apartment during the design fair, and for the 1000+ visitors who came through the doors another treat was awaiting them in the kitchen, where V-ZUG’s Gourmet Academy team were busy all day every day producing an equally beautiful array of hors d’oeuvres. V-ZUG’s presence at the H+O apartment came about through another collaboration, namely Ossino’s design for the boutique Swiss manufacturer’s at Salone 22, which was inspired by V-ZUG’s vision on circularity.

That sustainability theme continued in V-ZUG’s other events, including a presented in partnership with Habitus magazine, and in the food served at H+O which used a seasonal, entirely plant-based menu. Planning for the H+O event began months earlier back at V-ZUG HQ in Switzerland where Global Head of Gourmet Academy, Chris Lacroix, and his team workshopped menus around what V-ZUG equipment they had available to them in the apartment (two ovens, a supreme cooling fridge and a wine fridge) and how the food would complement the aesthetics and ambience of the apartment.

Given the petite size of the kitchen, the menu was technically built around significant mise en place and the regenerative properties of V-ZUG’s ground-breaking steam ovens. This allowed frozen focaccia to emerge from the Combi-steam oven as if it had been baked that day. Similarly, casings for the sweet and savoury tarts were prepared in 100 unit batches.

“We were basically using household appliances to do an extremely challenging catering event over five days,” says Lacroix. “But when you have these appliances with the help of the multifunction ovens we can deliver an event with such a big scope.”

The selection of hors d’oeuvres was then designed to reflect the H+O installation through an Italian-influenced menu which echoed the tones of the apartment. Bite-sized lemon tarts mirrored the citrusy ceiling in the bedroom and chocolate tarts the rich brown ceiling in the living room. Presentation was pared back to its essentials.

The food and the appliances from V-ZUG’s new Excellence line were an easy conversation starter for the 300+ architects, students and other members of the design industry who visited each day.

“Most of the people who came, they didn’t expect anything to be happening, but we had a working kitchen there and serving food,” says Roman Wüthrich, a Gourmet Academy trainer who travelled from Zug to Milan as one of a team of three to deliver the event. “And because we were there, that really got their attention; and then the appliances are so beautifully integrated in that kitchen, they were interested in the cover panels that we had on the fridges. And then the next question that they ask is ‘How can I prepare this? How did you do it?’”

Wüthrich and fellow chef Reto Stefania said the greatest compliment was that people didn’t want to leave and spent extended time savouring the apartment and the food.

This combination of inspiration and education is a big part of the Gourmet Academy’s remit, whether they are doing a high-end event or a cooking demonstration for new customers. “With V-ZUG appliances, you can get the professional kitchen at your home; you don’t need a big kitchen, you can do it with one or two appliances, so that’s something,” says Wüthrich.

For Lacroix the H+O Apartment was another opportunity to showcase the quality of his team, who have all worked around the world in leading restaurants, and the quality of the equipment they use: “You solve problems with solutions, right? Where do you get your solutions as a chef? With techniques, but you also need that sharp knife and you need good equipment in order to do amazing things.”