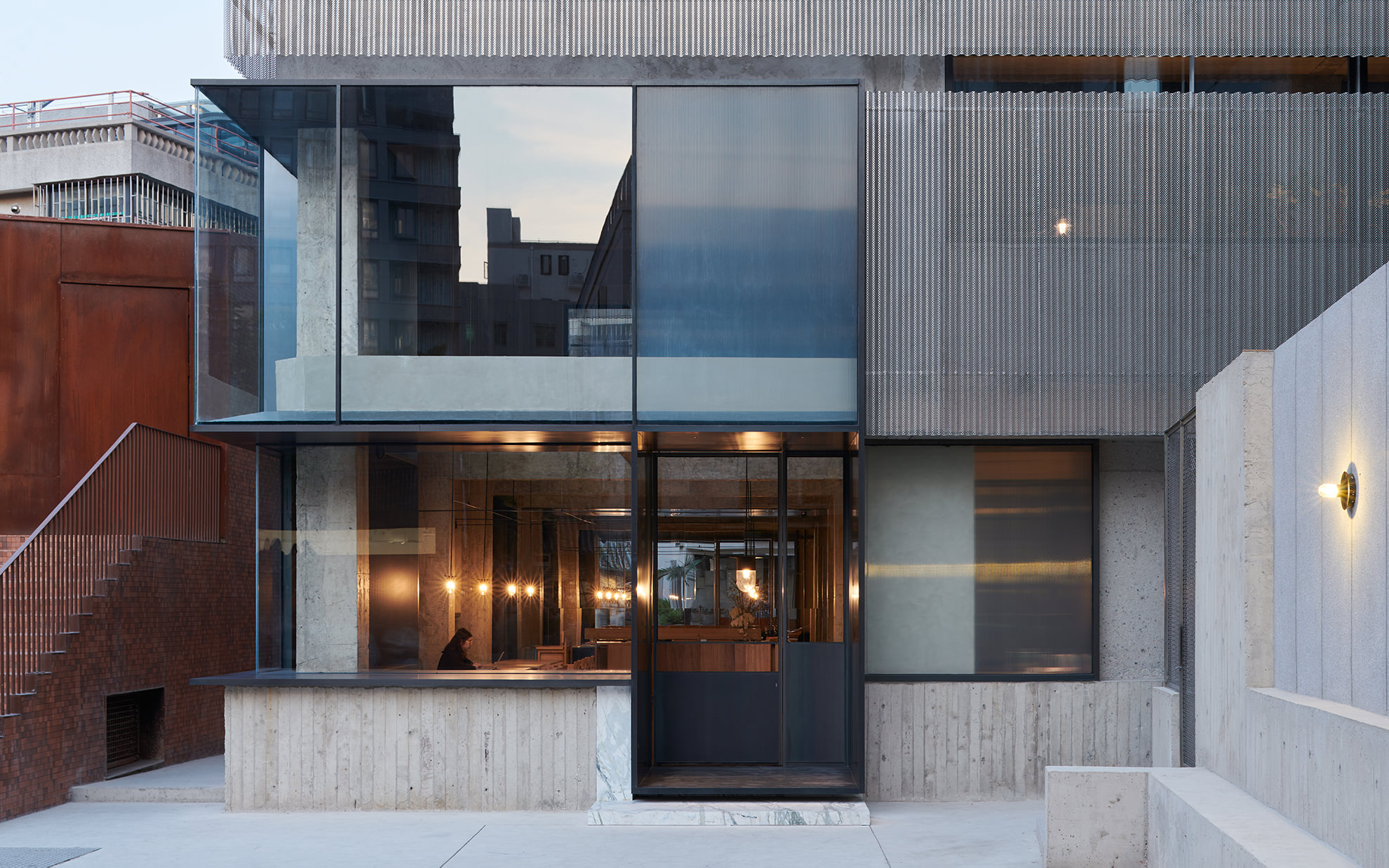 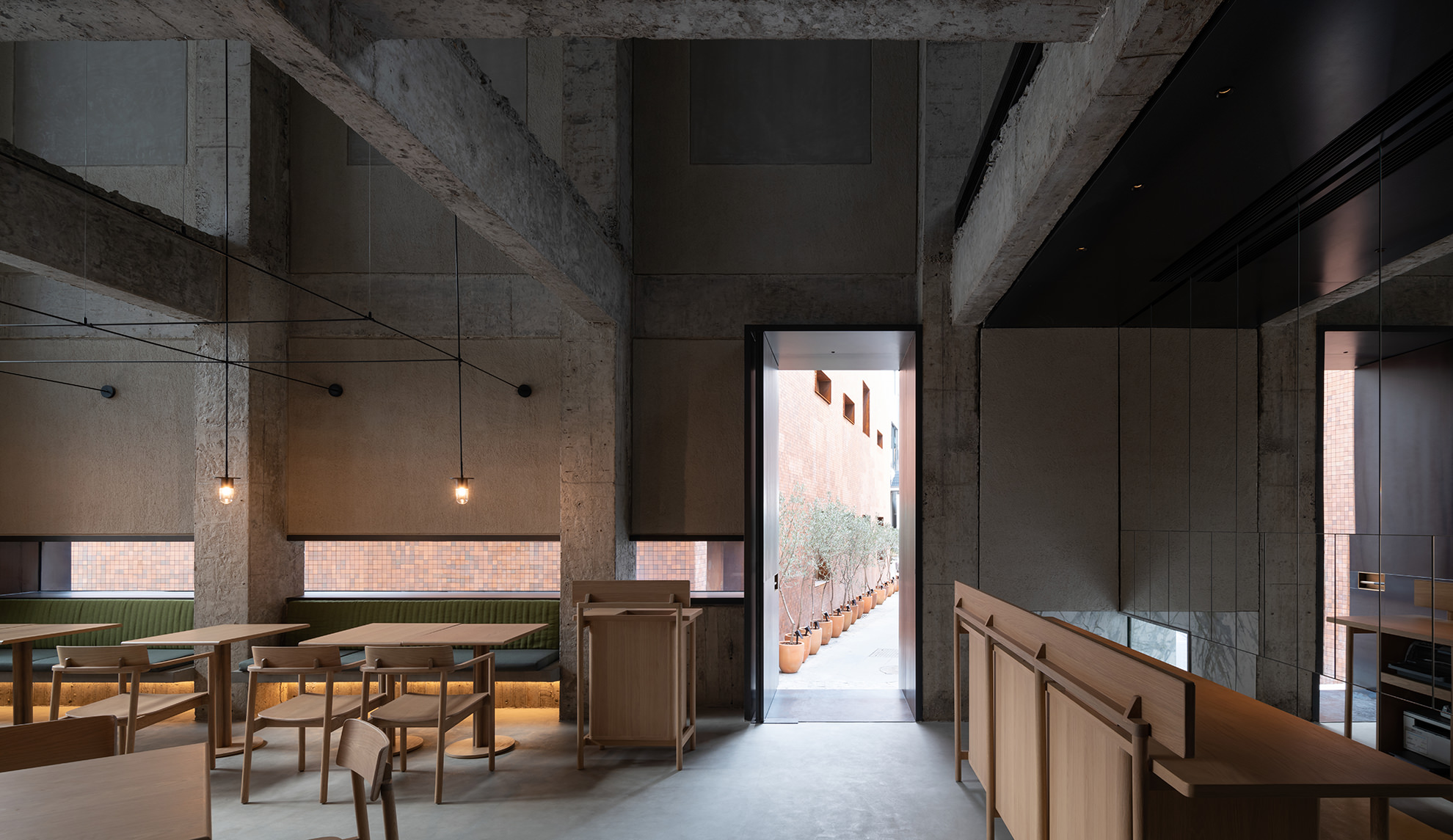 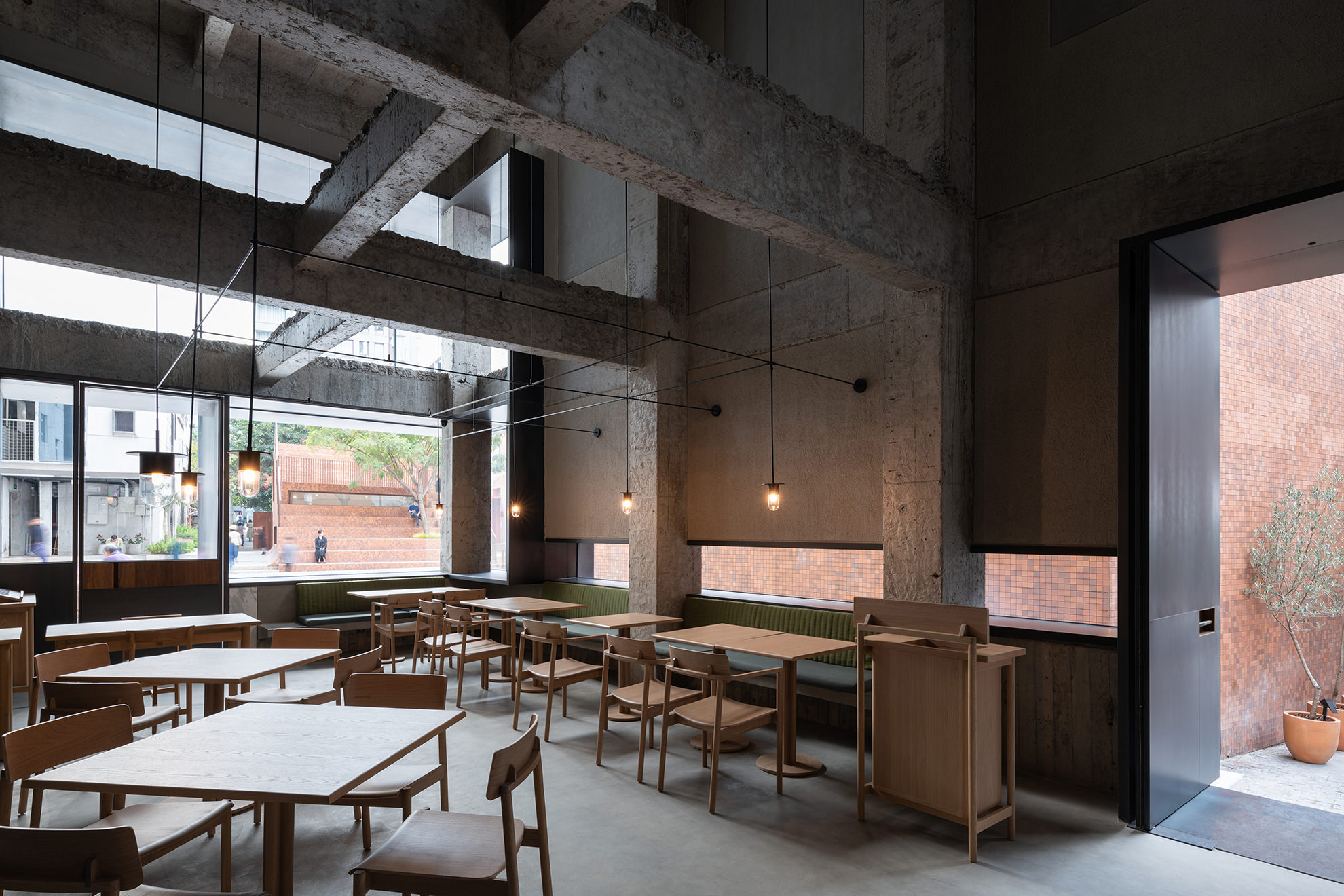 A former nine-storey private apartment, nestled in the densely packed residential area of Nantou , has been transformed into an inviting guesthouse under the guidance of . In this burgeoning growth of China’s own Silicon Valley under the phenomenon called Urban Village, many of the rural districts are slowly becoming a community made of mixed-use and social infrastructures, resulting in tightly packed alleyways and dead-ends that leave endless fascination for the tourists. Taking these elements and characteristics into account, Neri&Hu’s latest vision transforms Nantou City Guesthouse (also known as Shenzhen Nantou Jiangnan House) into an intimate thoroughfare between the past and present.

The guesthouse can be spotted among the tight clusters of three to four-storey buildings. Though it is quite a giant among its neighbours, the building respectfully follows a similar colour scheme of muted greys and whites. Façade and balconies are clad in strips of corrugated perforated metal screen offset from the building structure for privacy between nearby neighbours, albeit thin slivers of orange from the building façade tiles peek through for an added dimension. 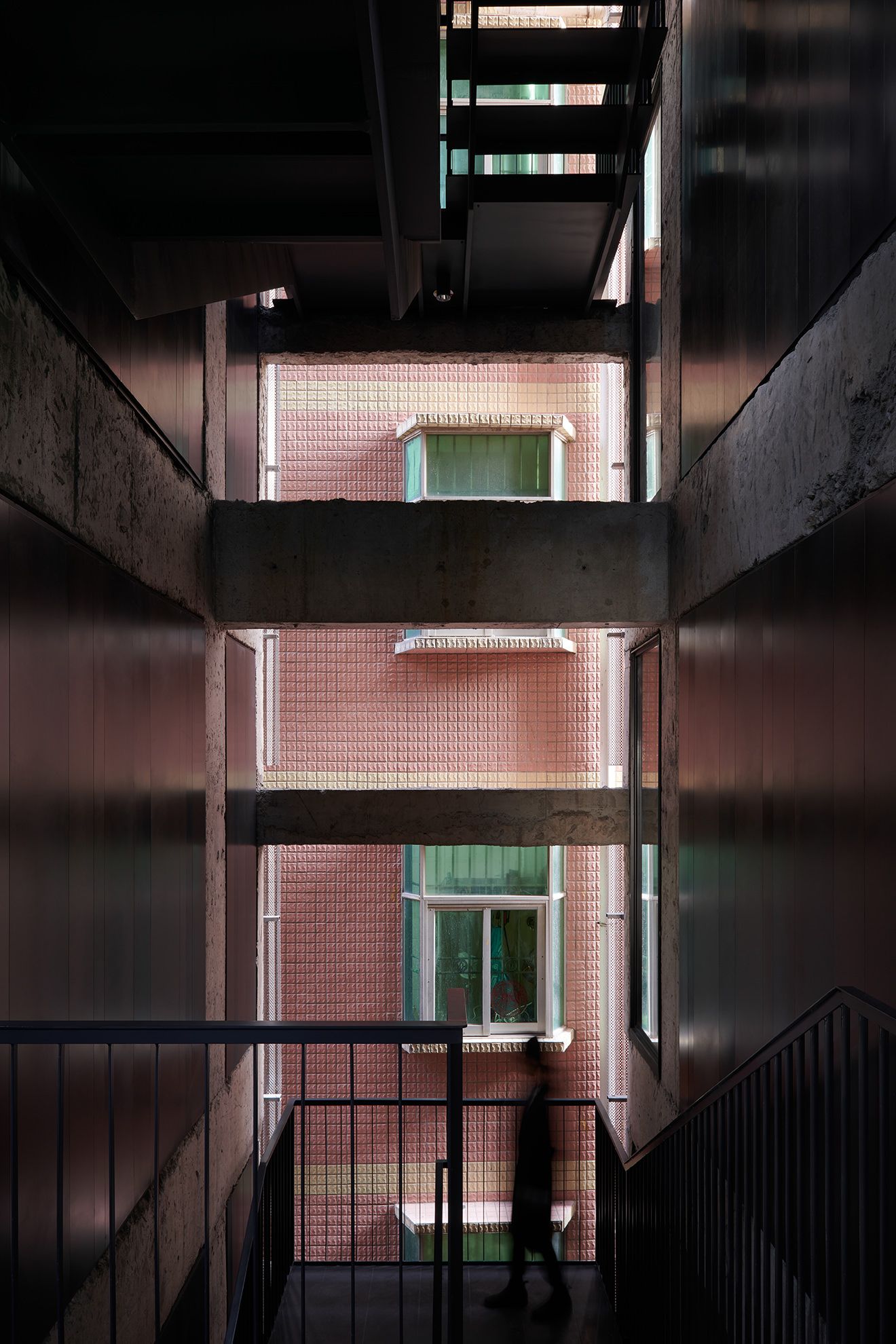 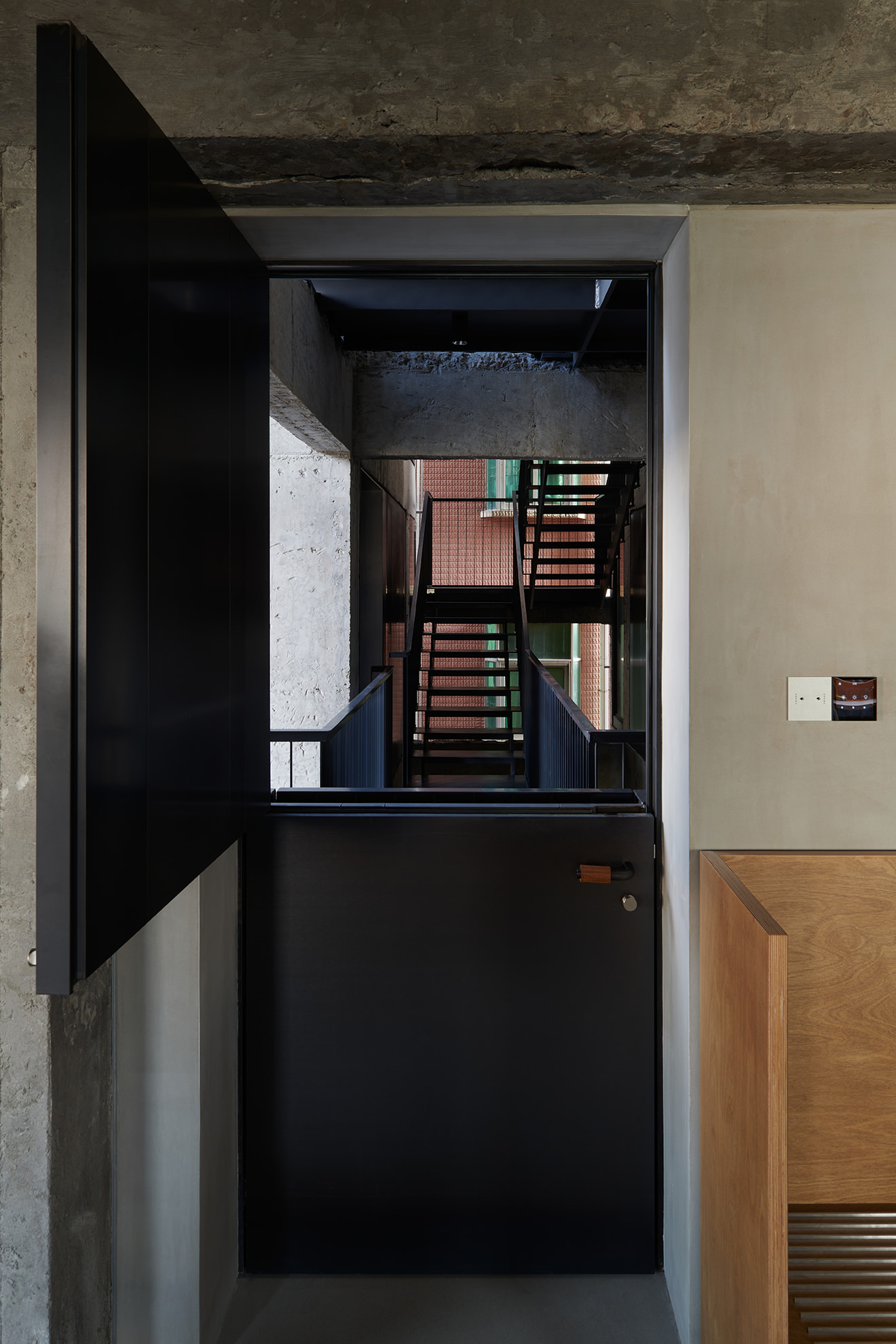 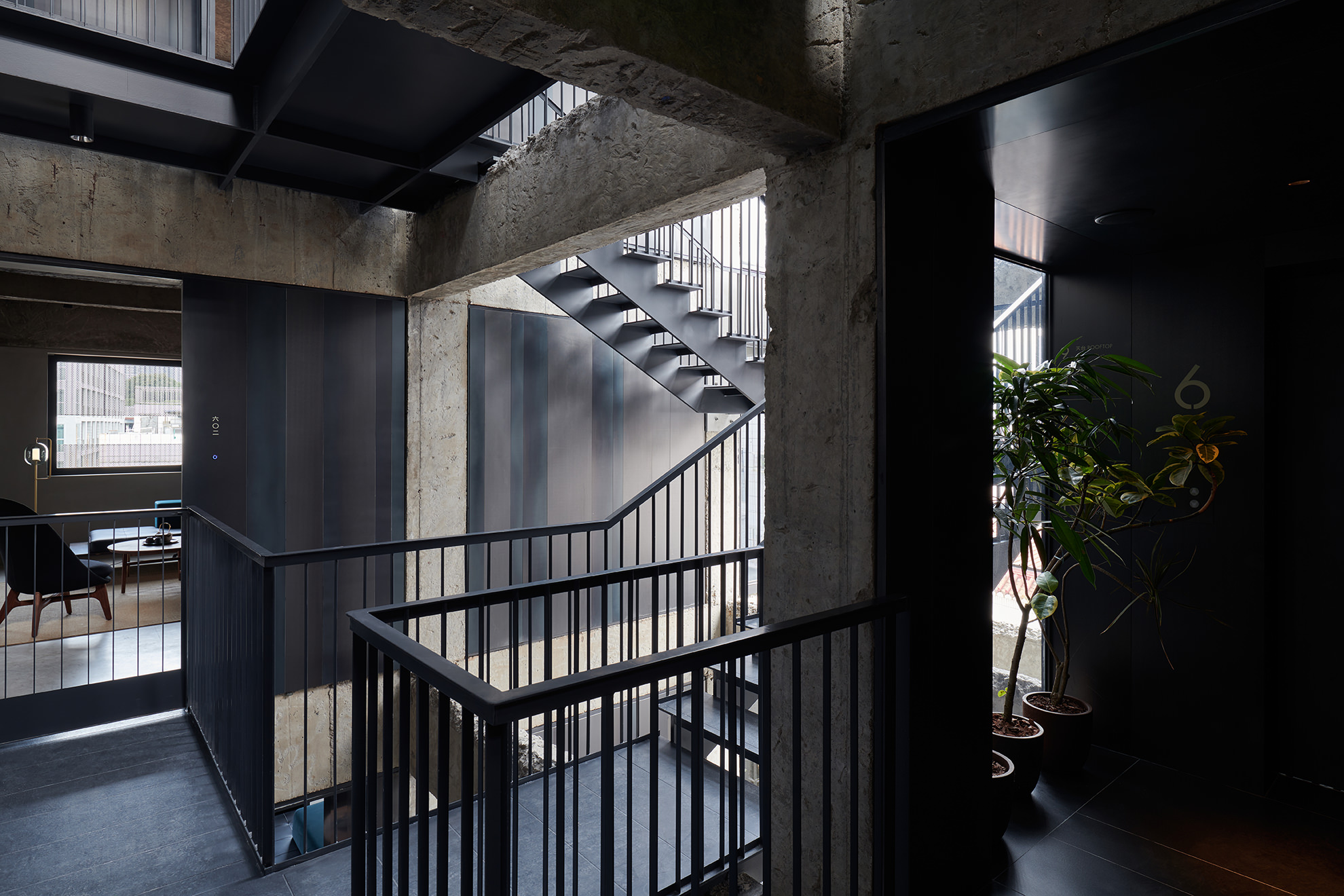 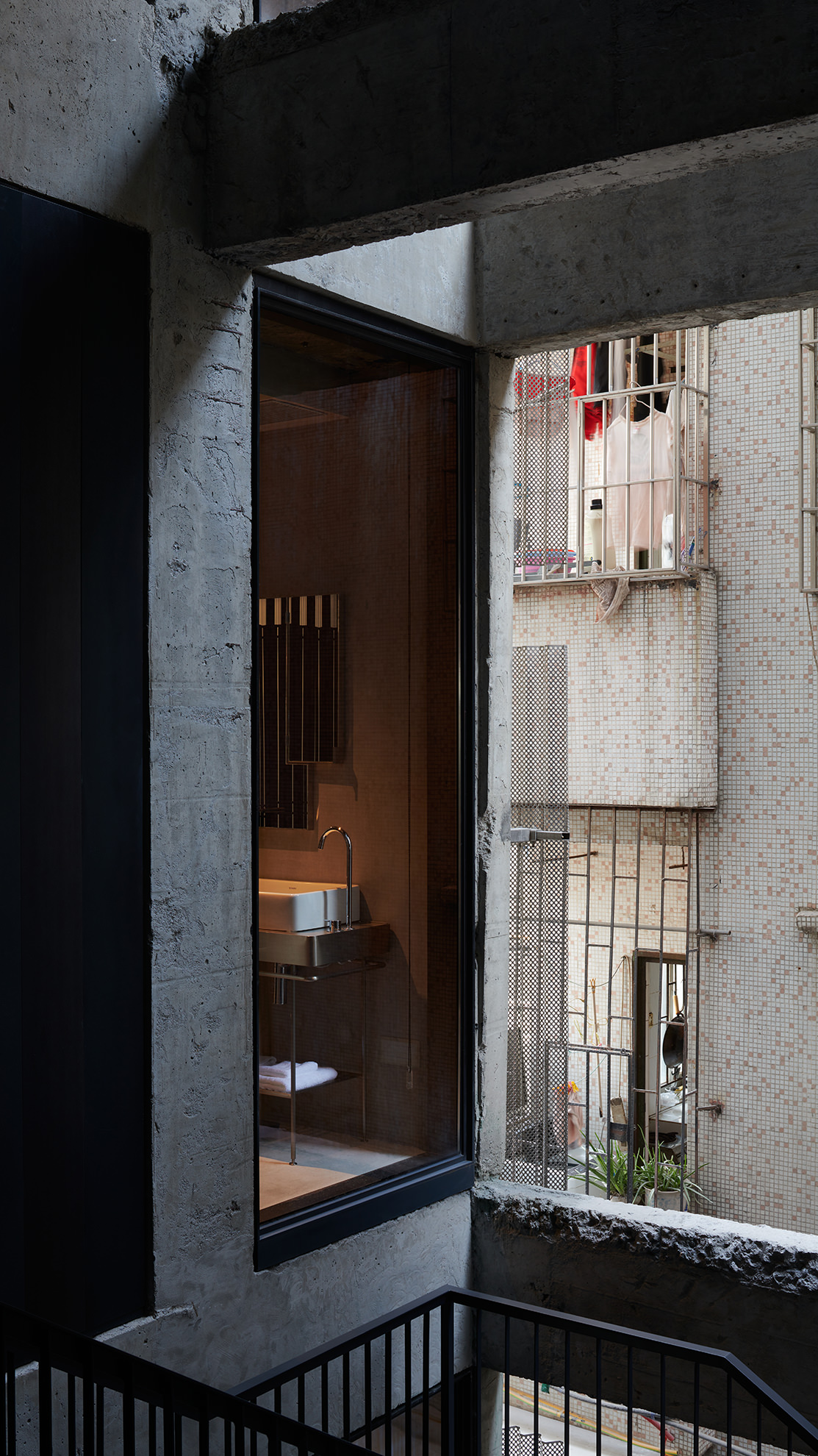 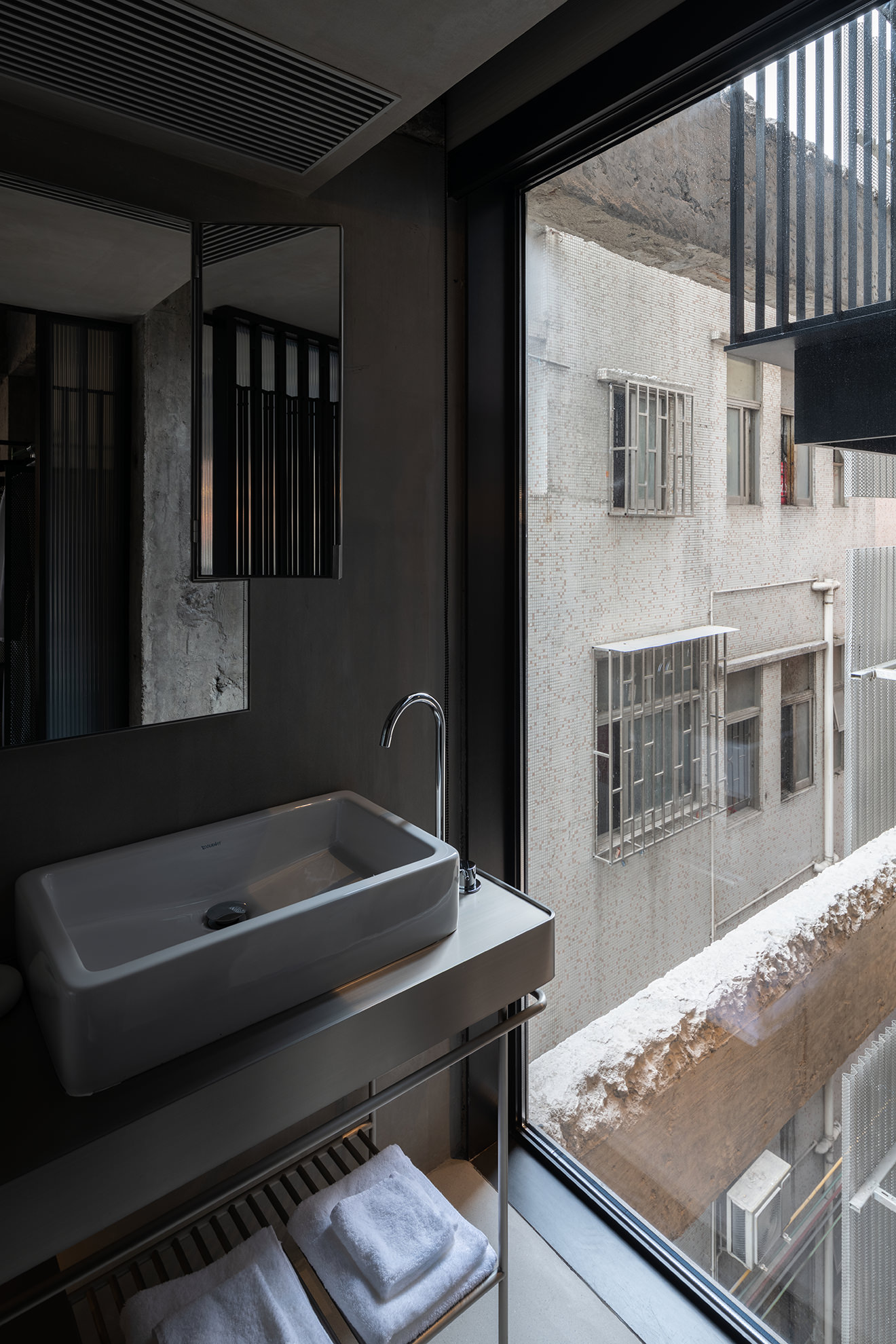 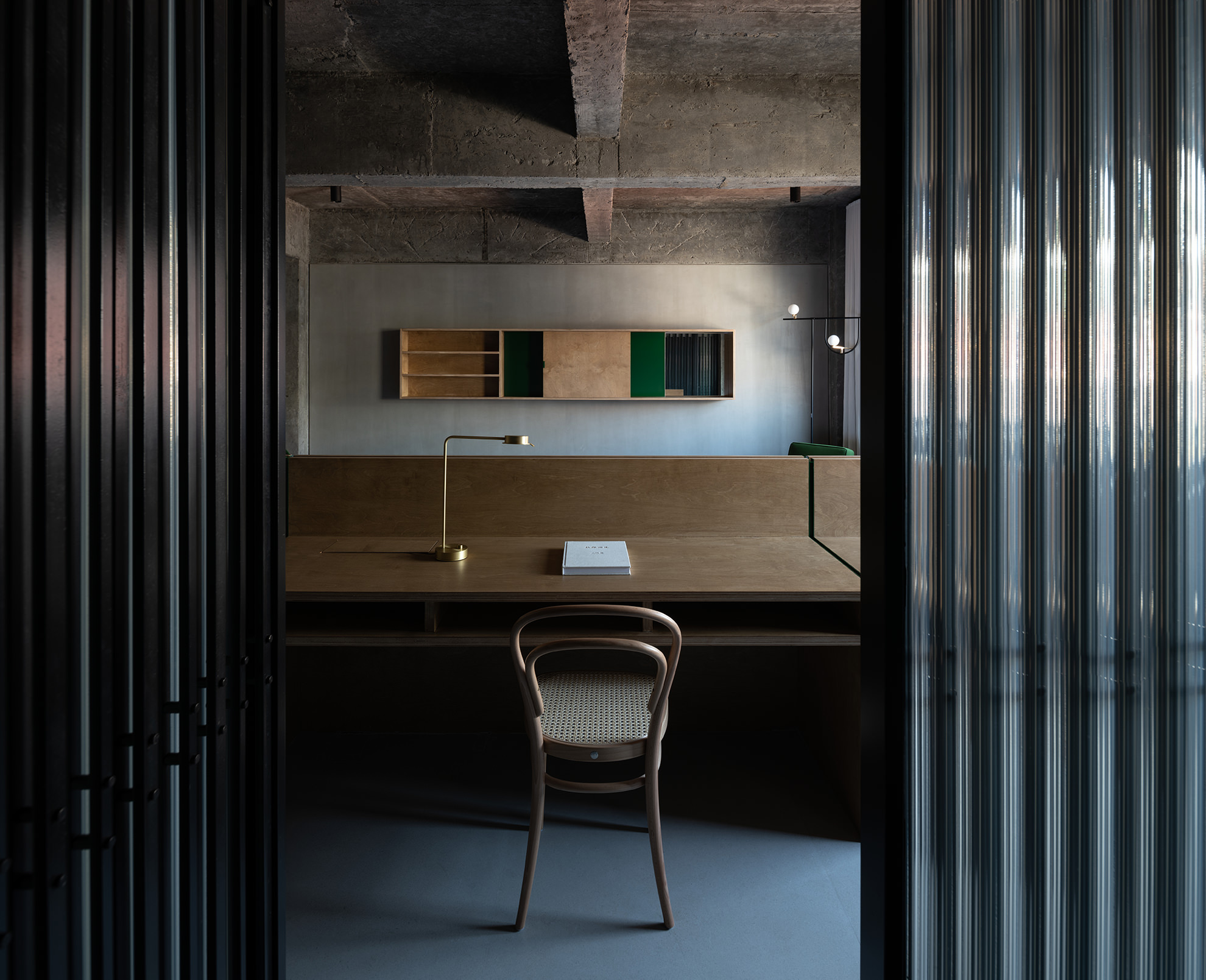 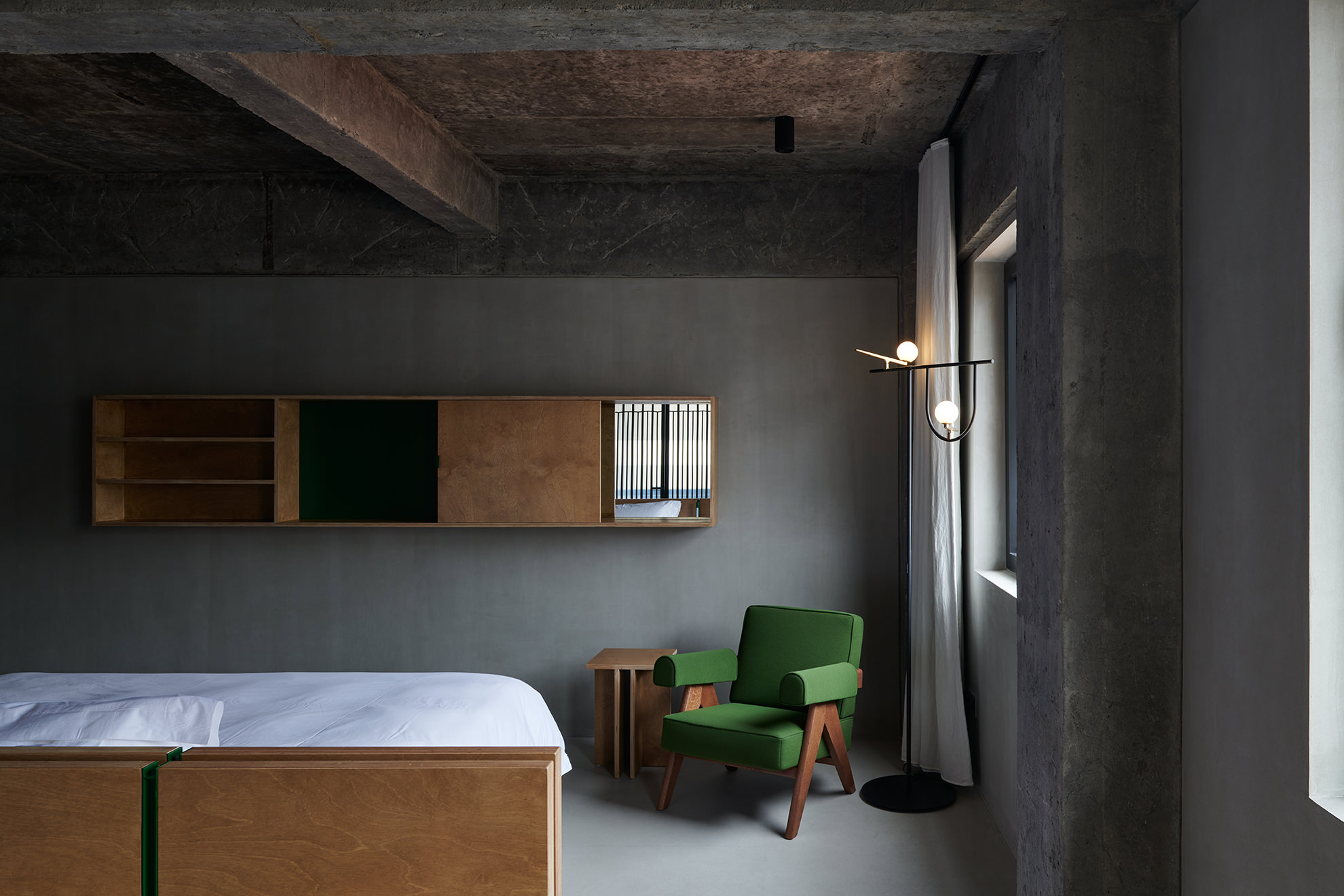 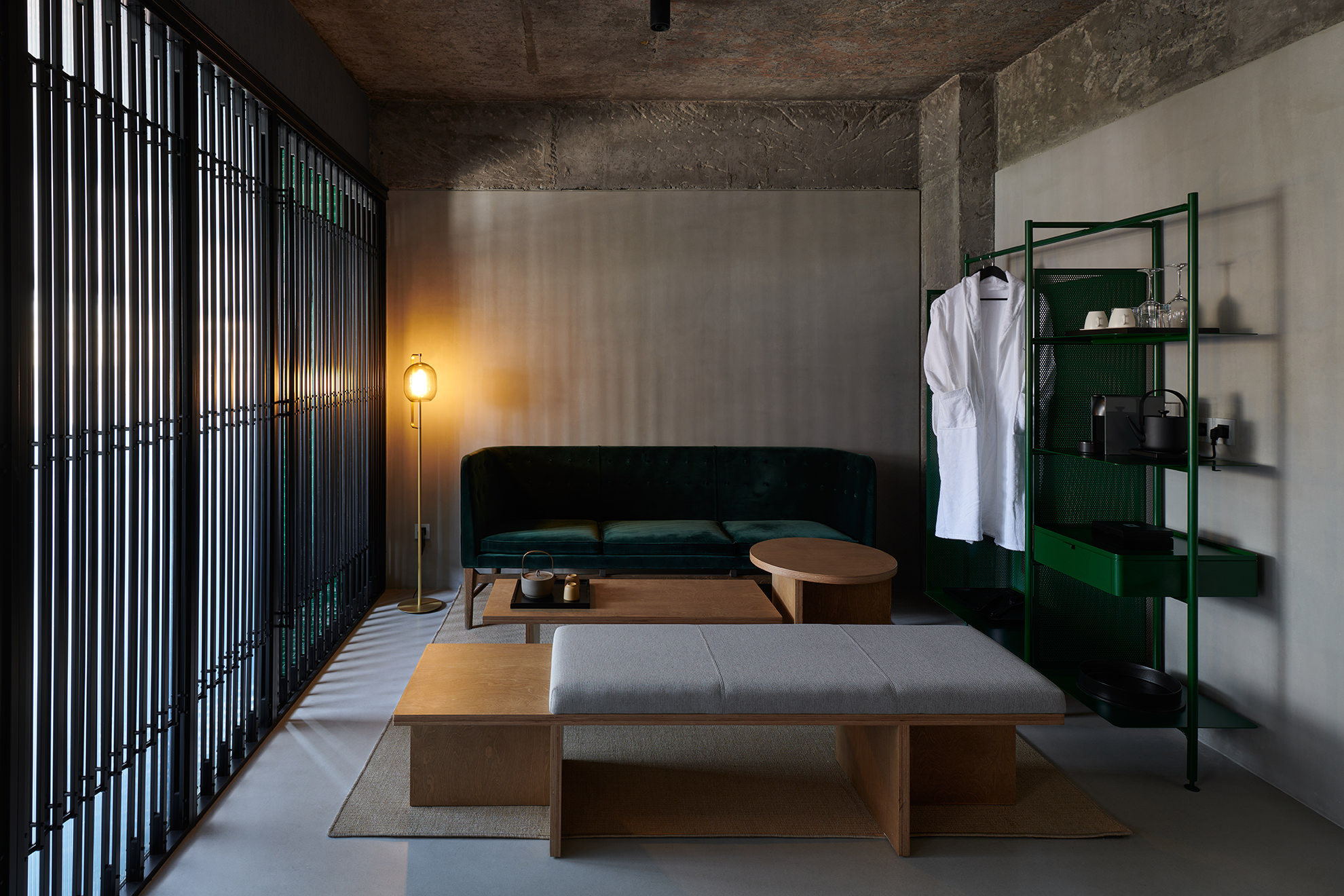 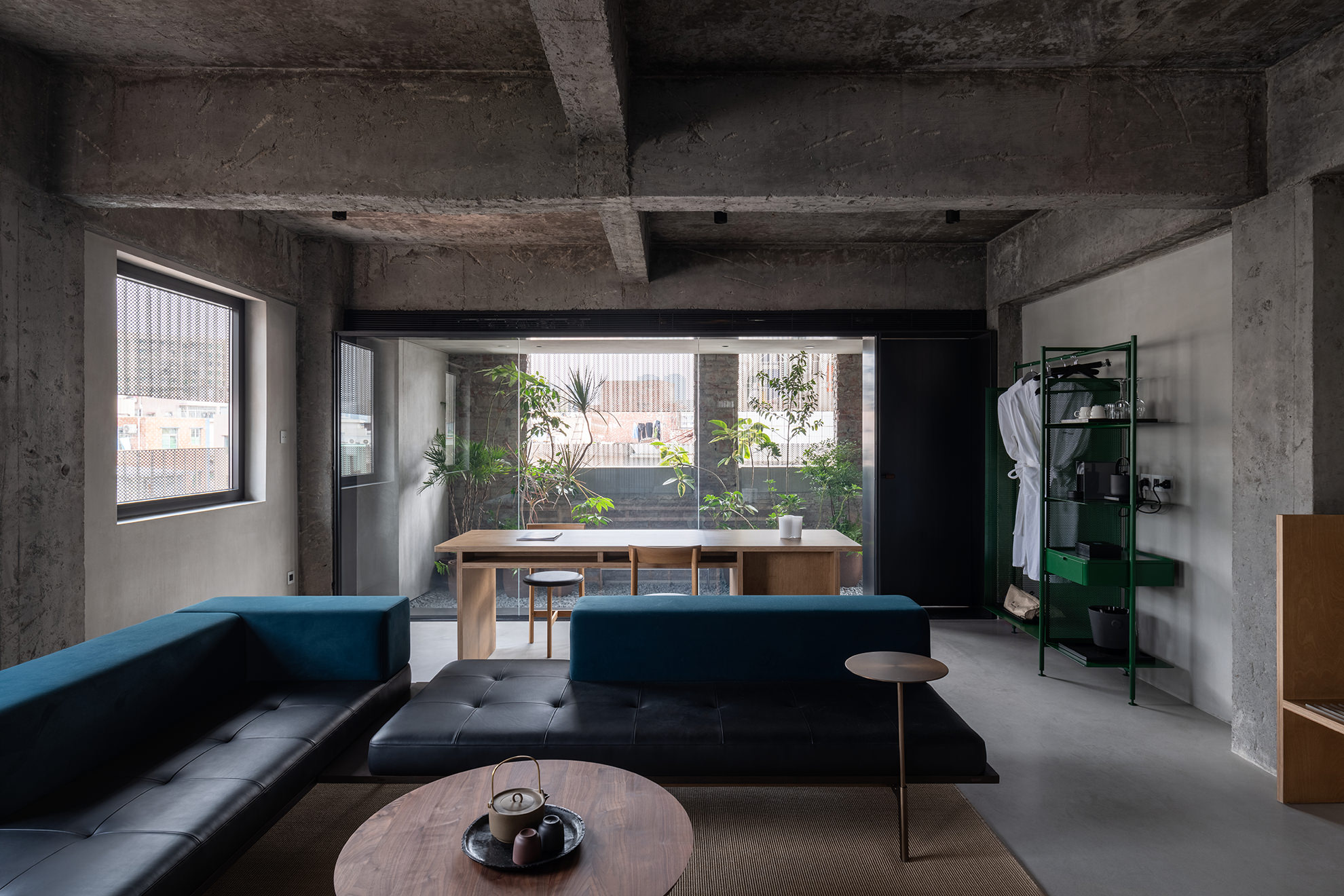 Neri&Hu’s guest house entrance can be found in different methods, though made purposeful to blur the public and private boundaries. One entrance, located at the corner of the building, is surrounded by a bronze clad pavilion-gallery and an open basketball court. With black window frames and counter height timber-clad windowsills, the entrance is given an inviting threshold of another environment. A similar treatment is given to the second entrance, although visitors can travel up a concrete staircase that can be used as seating arrangement for locals occupying the space. A touch of marble is found at the corner of the second entrance, also designed to be at counter height for both decorative and functional features.

Internally, the original building has been edited and chiselled to fit restaurants on the ground and first floor with guest rooms located above. The existing staircase is removed to allow for vertical garden and light to ascend across the nine levels. A new metal staircase is introduced to allow visitors to travel upwards towards their own rooms while appreciating glimpses of local life captured by the concrete bones. At the top of the staircase is the upper storey bar and a roof terrace, demarcated by the floating roof structure with gable-house-like services attached. In the eyes of the architects, the add-on complements the organic transformation of the Nantou rooftops that have evolved into their own gardens, social or living spaces. 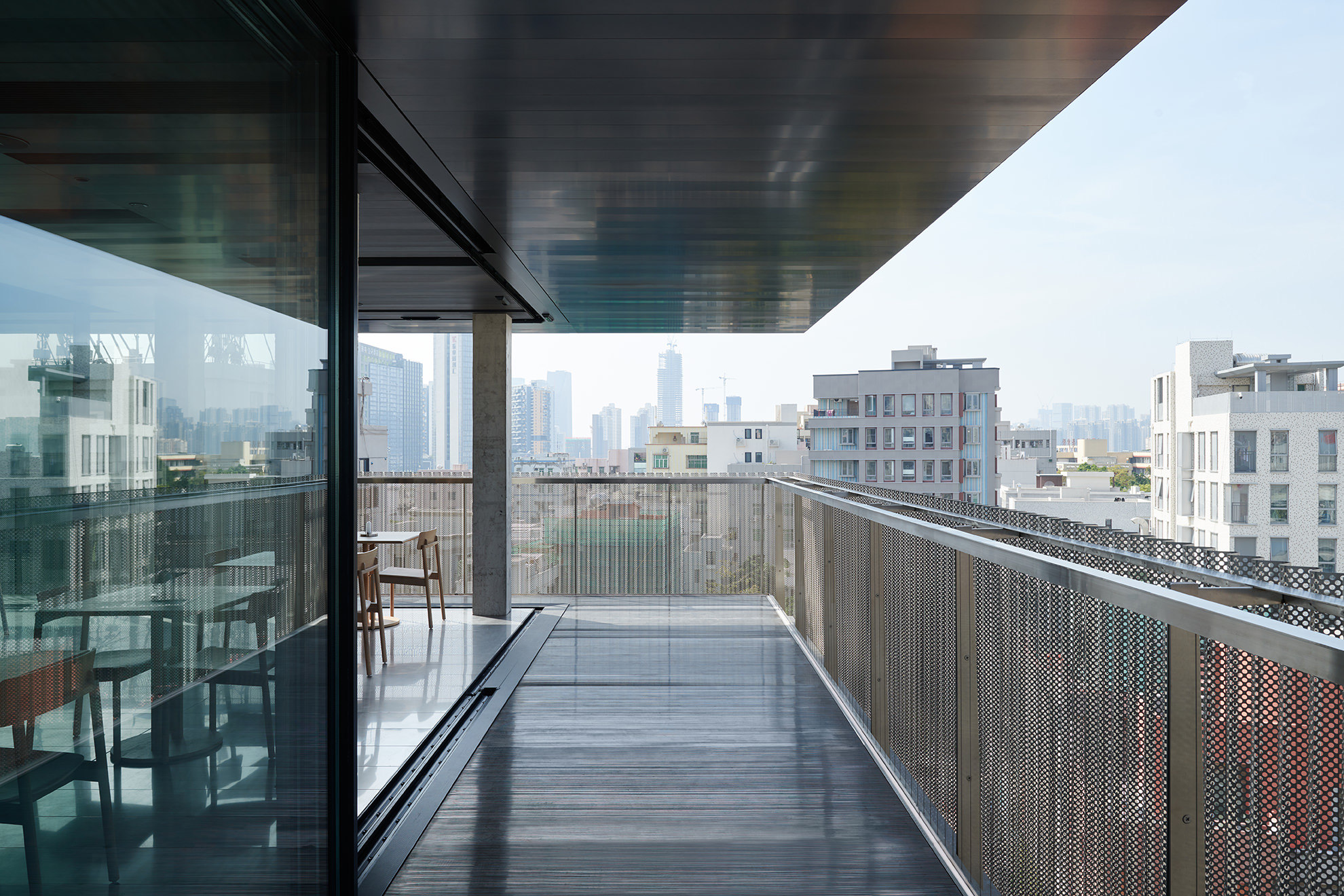 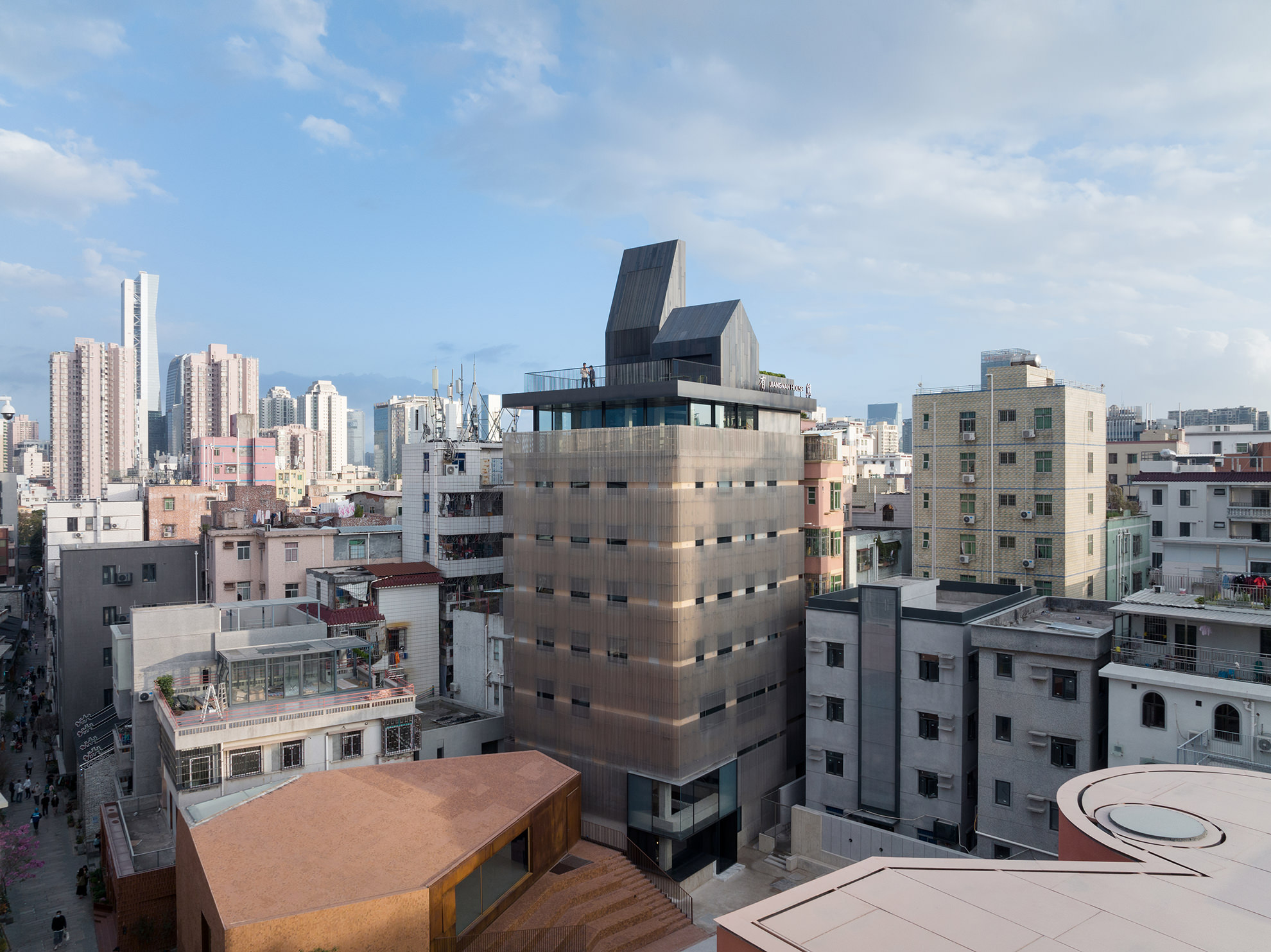 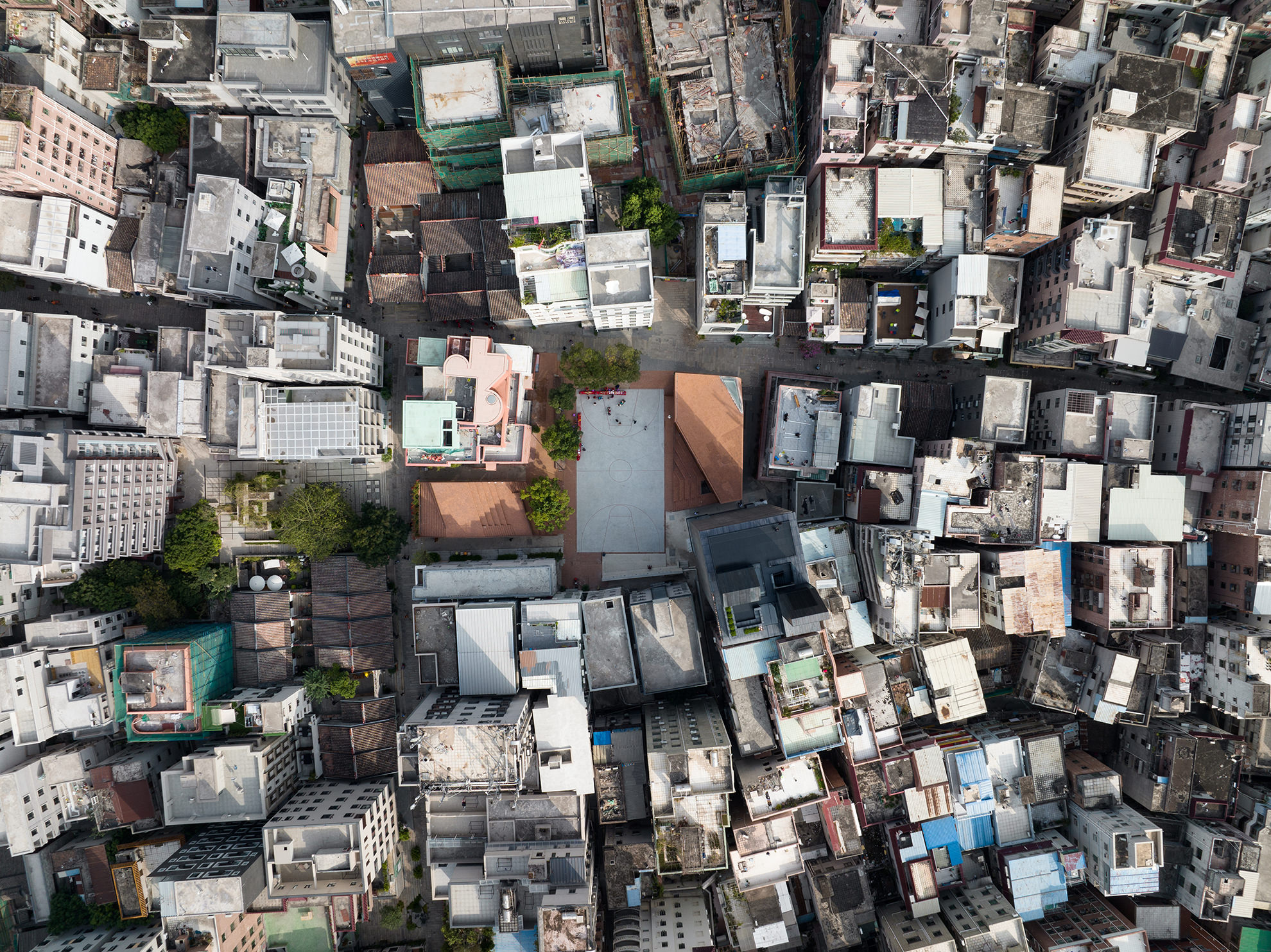 Taking cues from Svetlana Boym’s thesis on reflective nostalgia, interior layouts match the modern industrial contemporary aesthetic with steel fixtures and sleek metal furniture. However, moments of the past are reflected in pops of emerald green mosaic found in the bathroom, otherwise antique blue found in the plush furniture or the timber selected for lounge and bedroom spaces in the guest room. Such amalgamation celebrates the characteristics often found in the typology within the urban village.

A place of respite while offering a unique insight into the transformed landscape, Neri&Hu’s latest incision in this adaptive renewal project is one that creates a yearning for the fast-paced moments of travel, yet still allows us to slow down and marvel at the evolving narrative of a thriving community.