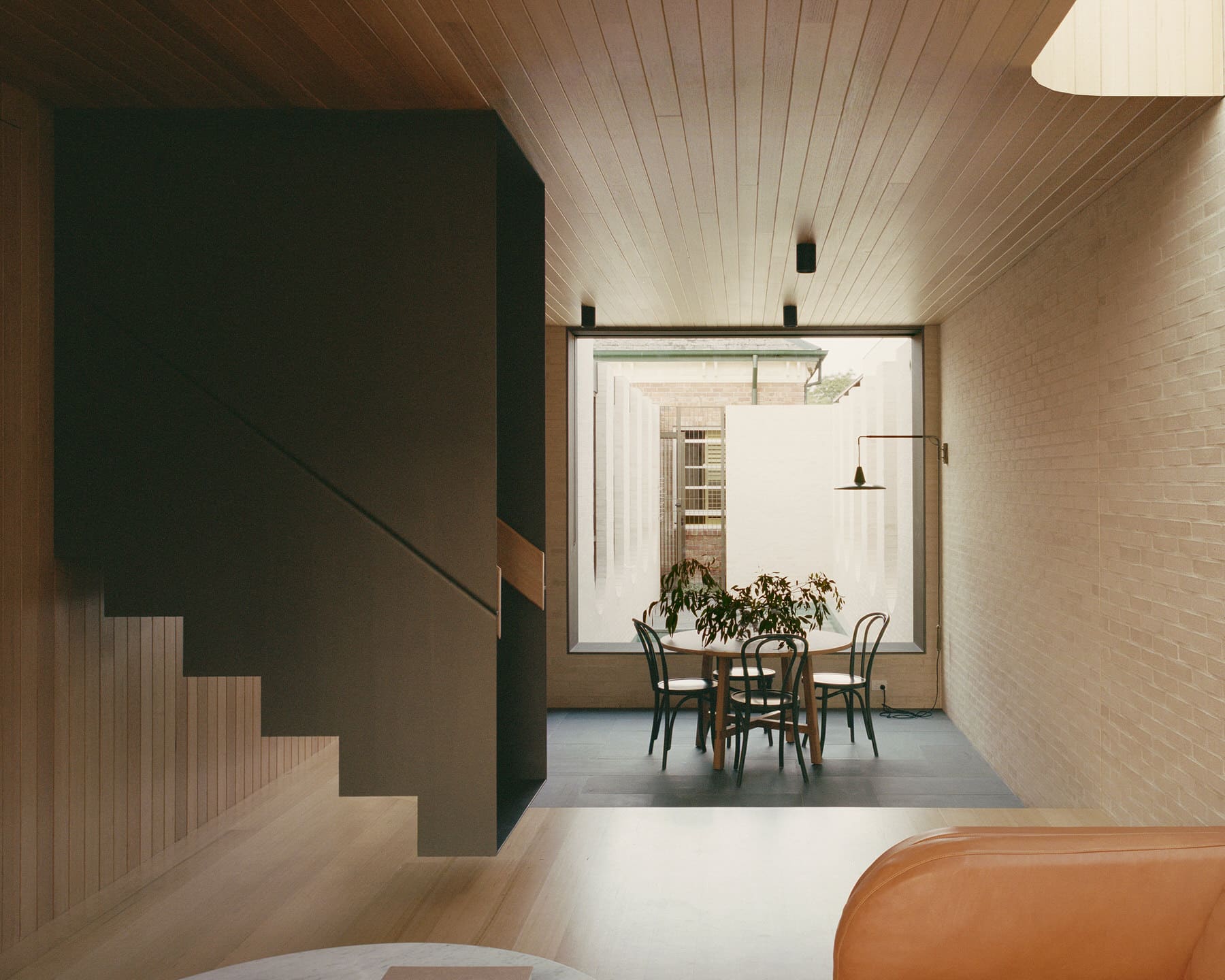 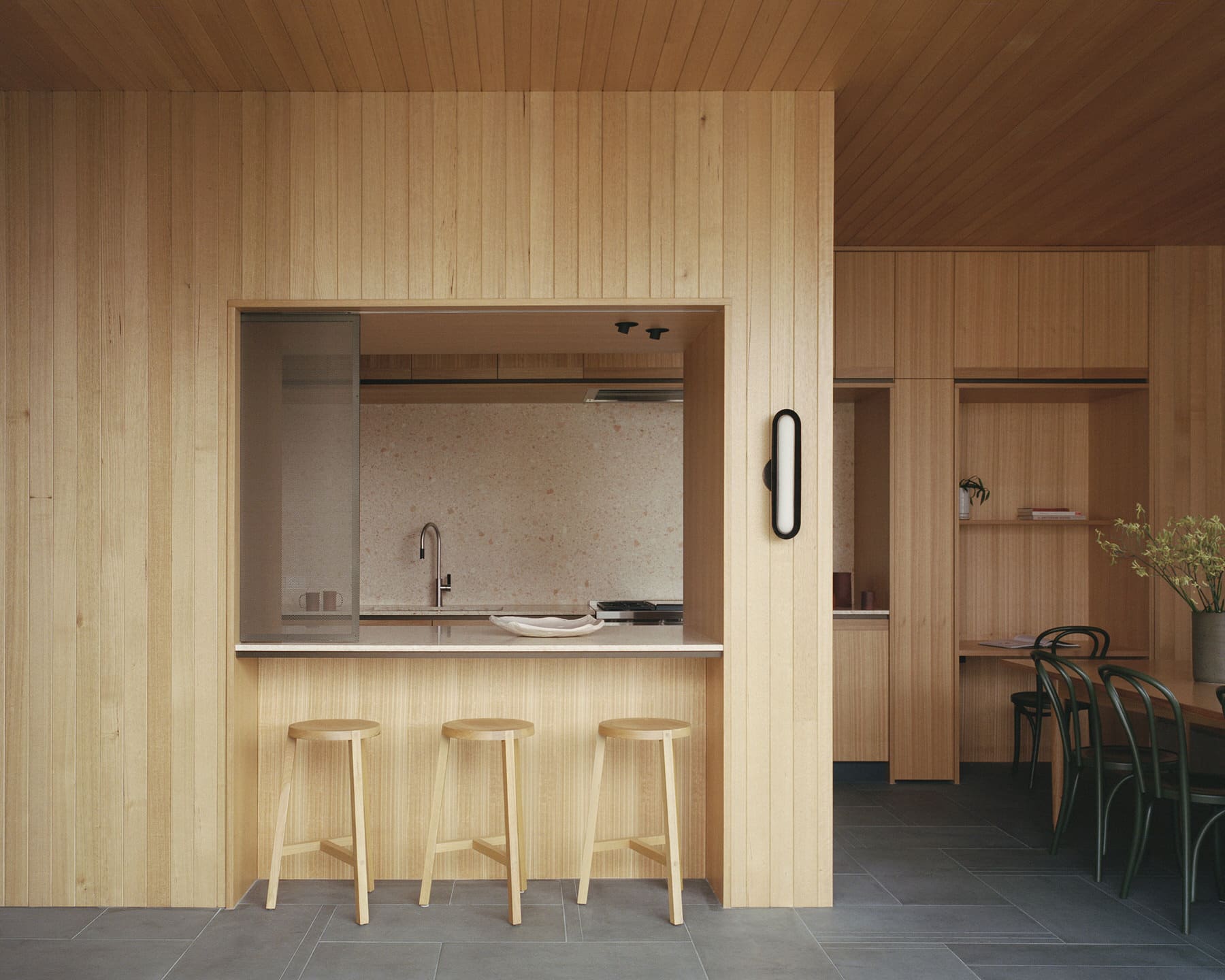 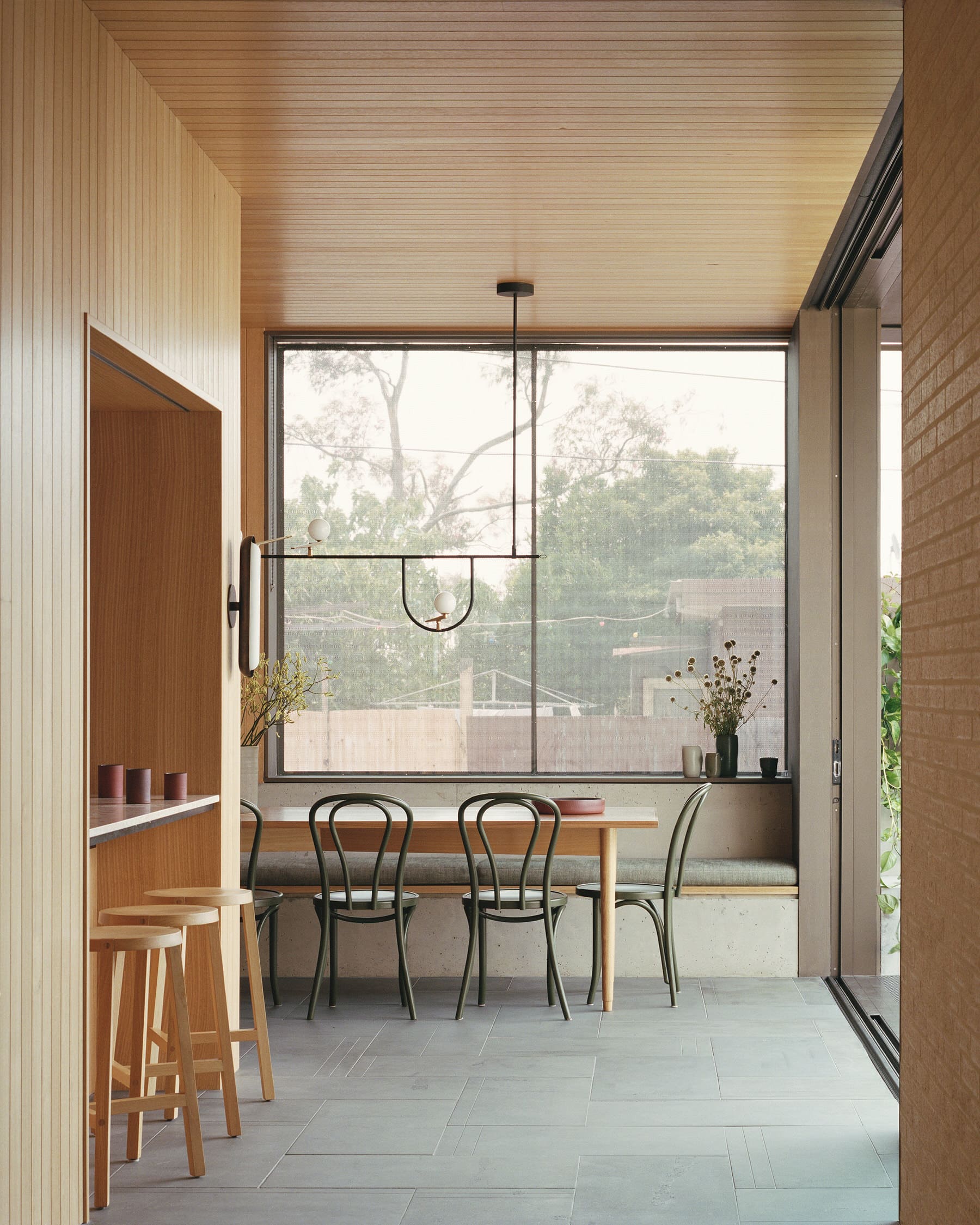 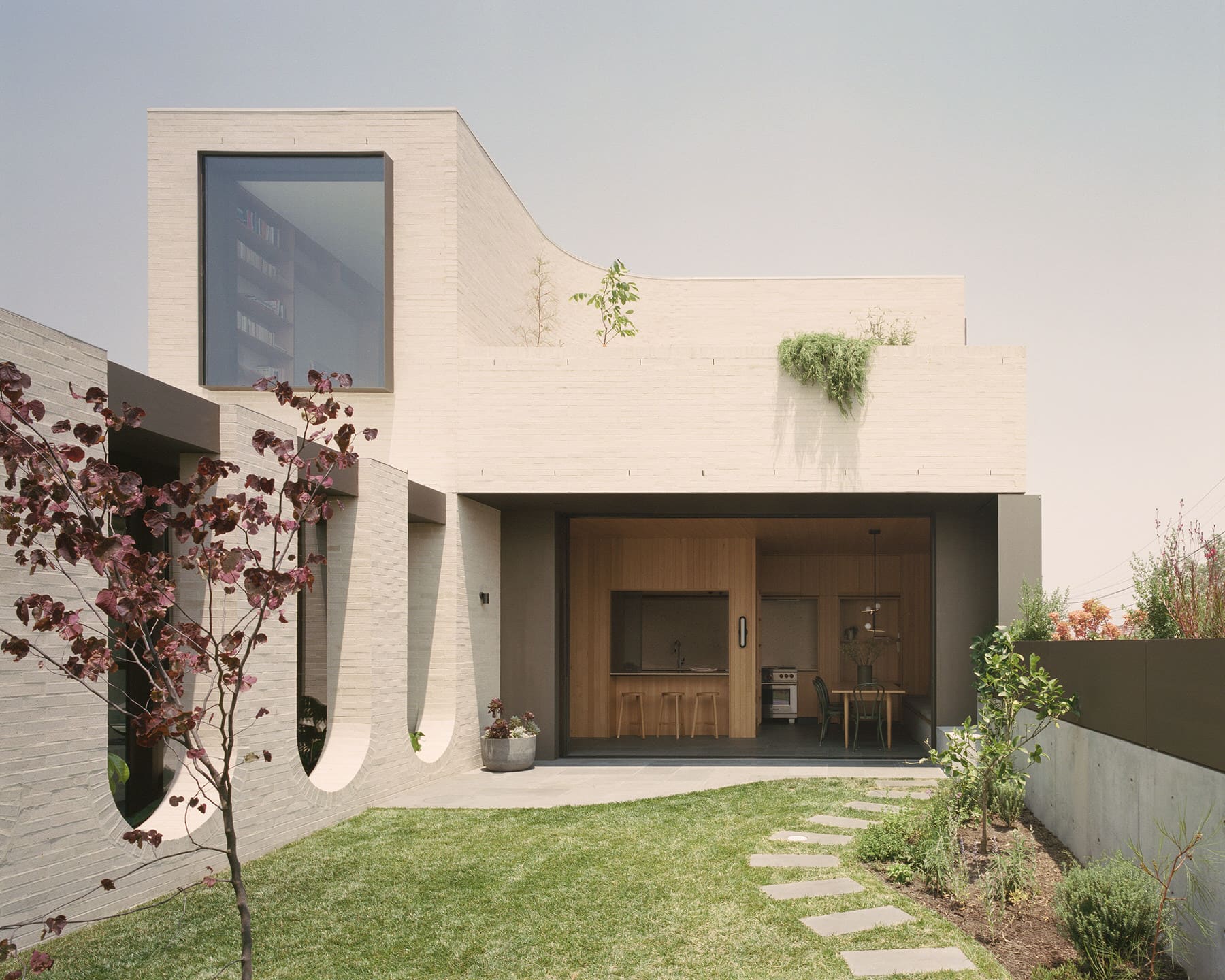 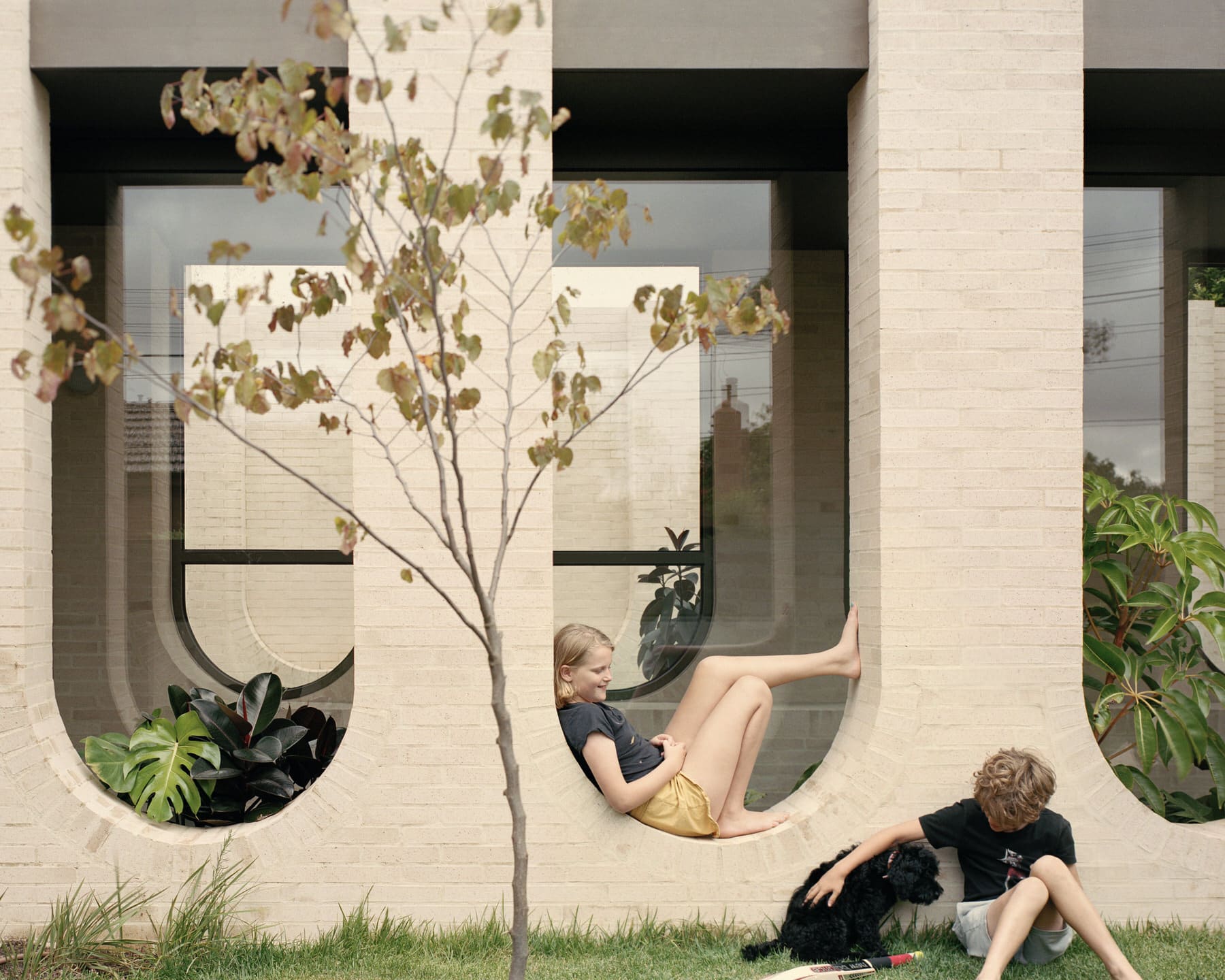 On the crest of Ruckers Hill in Northcote stands a prominent Edwardian that has been thoughtfully restored and expanded by Melbourne based practice, . The home sits on a corner block and, while moving through the site, the stately Edwardian composition transforms into an extension that is contemporary, robust and interactive with the streetscape. Celebrating dualities, this project cleverly considers the relationship between old and new, contained and open as well as fixed and flexible.

Rescued from decline, the period home has been extensively restored to reinstate elements to their original forms and detailing. This portion of the house retains the traditional cellular, central passaged floorplan and accommodates the bedrooms, bathrooms and laundry amenities. This is the zone for personal retreat and as director Mel Bright describes, it is “the architectural equivalent of comfort food.” The new extension by comparison “expands the nuanced living possibilities. Rooms are configured for the specialised interests of particular family members, yet each offers scope for temporal adaptations on the fly,” continues Bright.

The new pavilion is characteristically distinct from its frontal predecessor. Cream coloured bricks, bronze metalwork and concrete merge as the exterior palette making way for internal materials that are captivated by warm timber surfaces, neutral ceramic floor tiles and punches of colour from textiles and custom bathroom vanities. 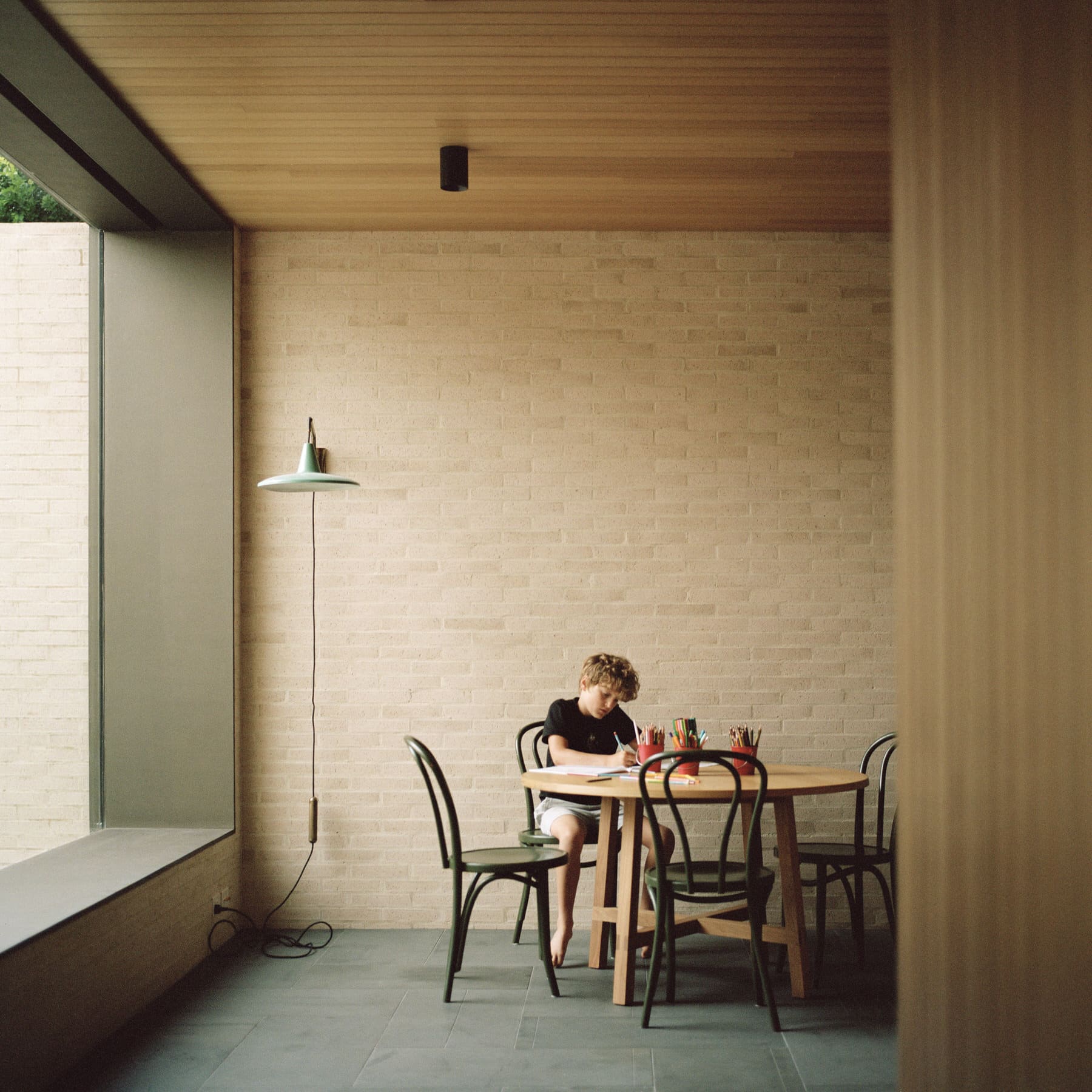 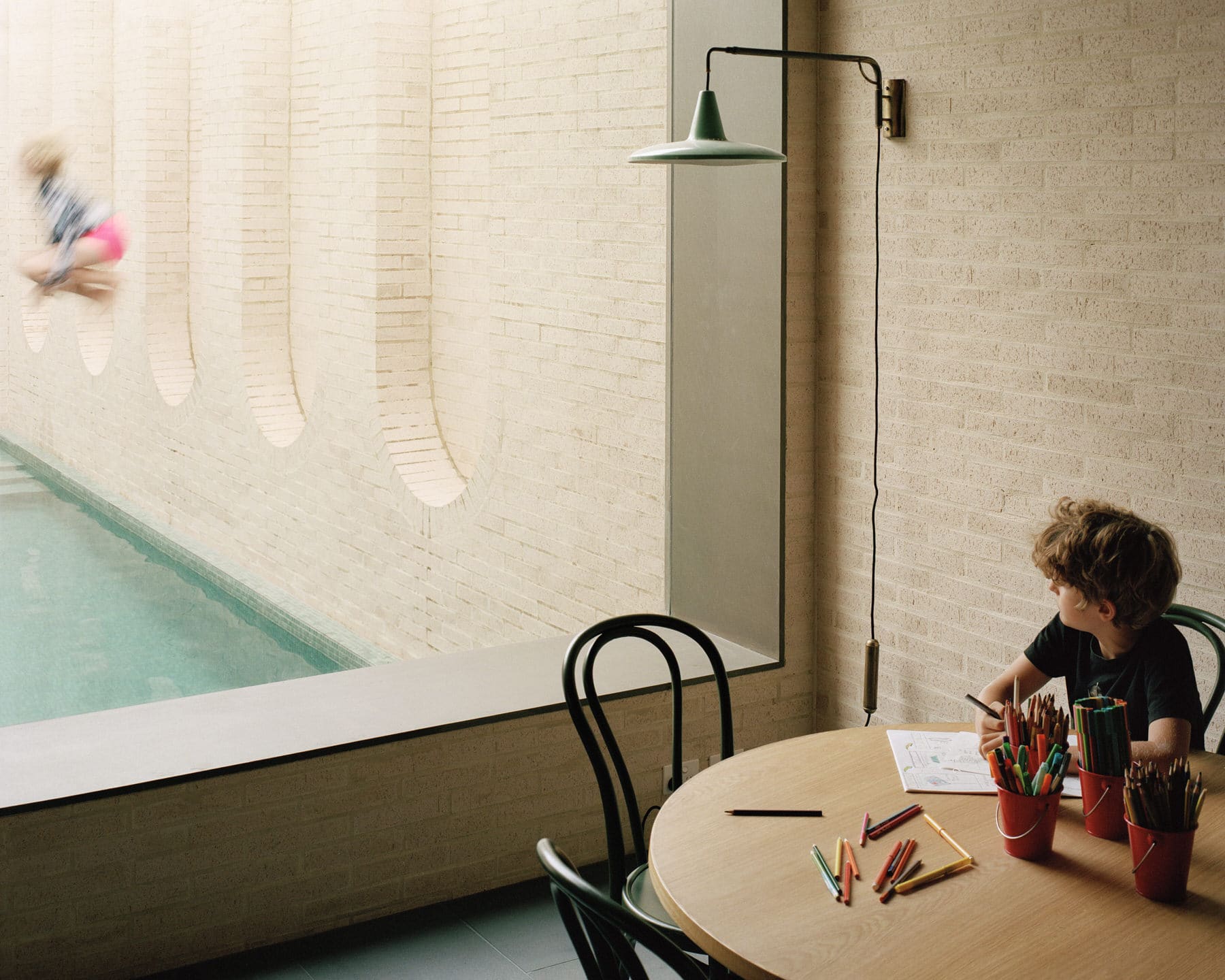 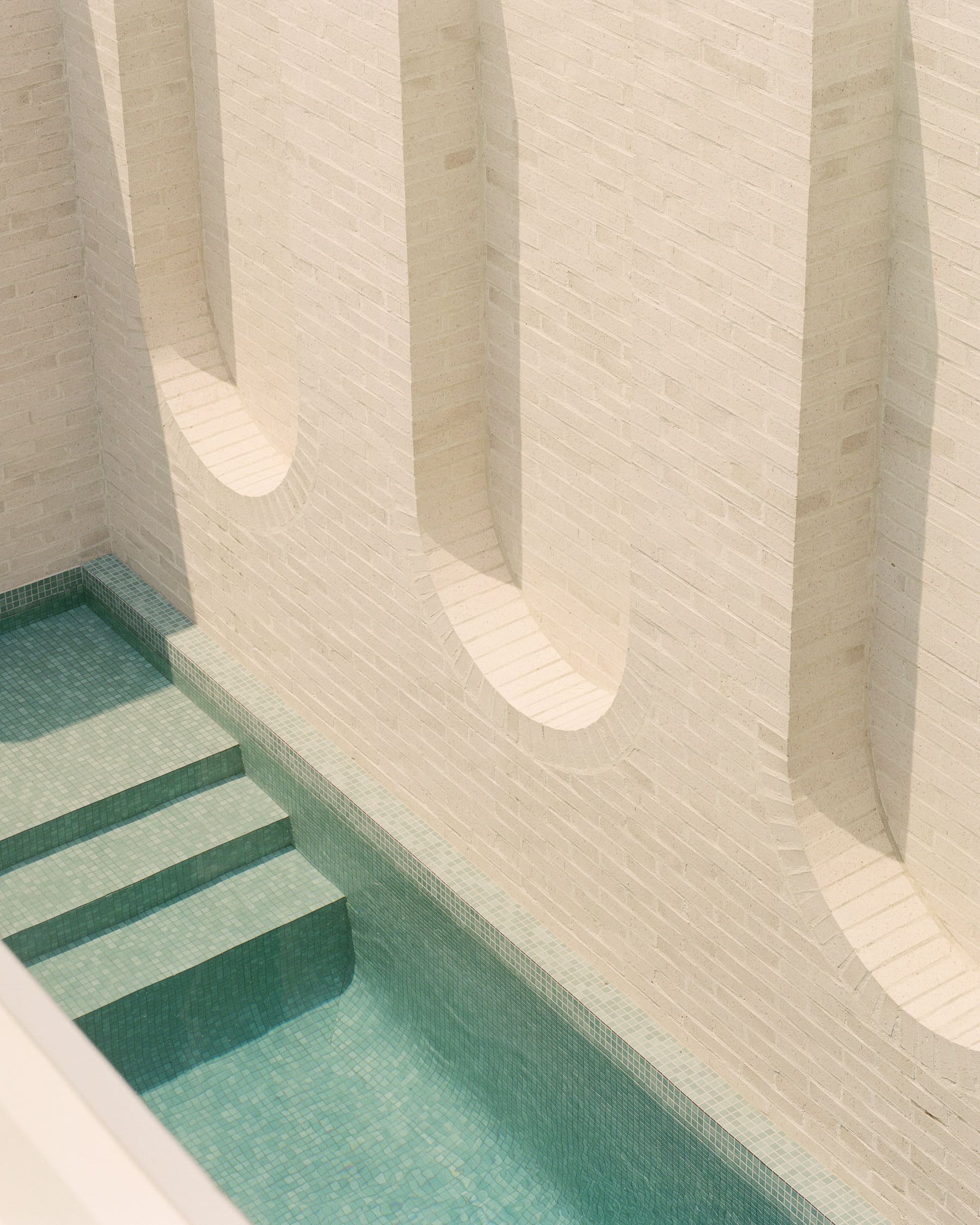 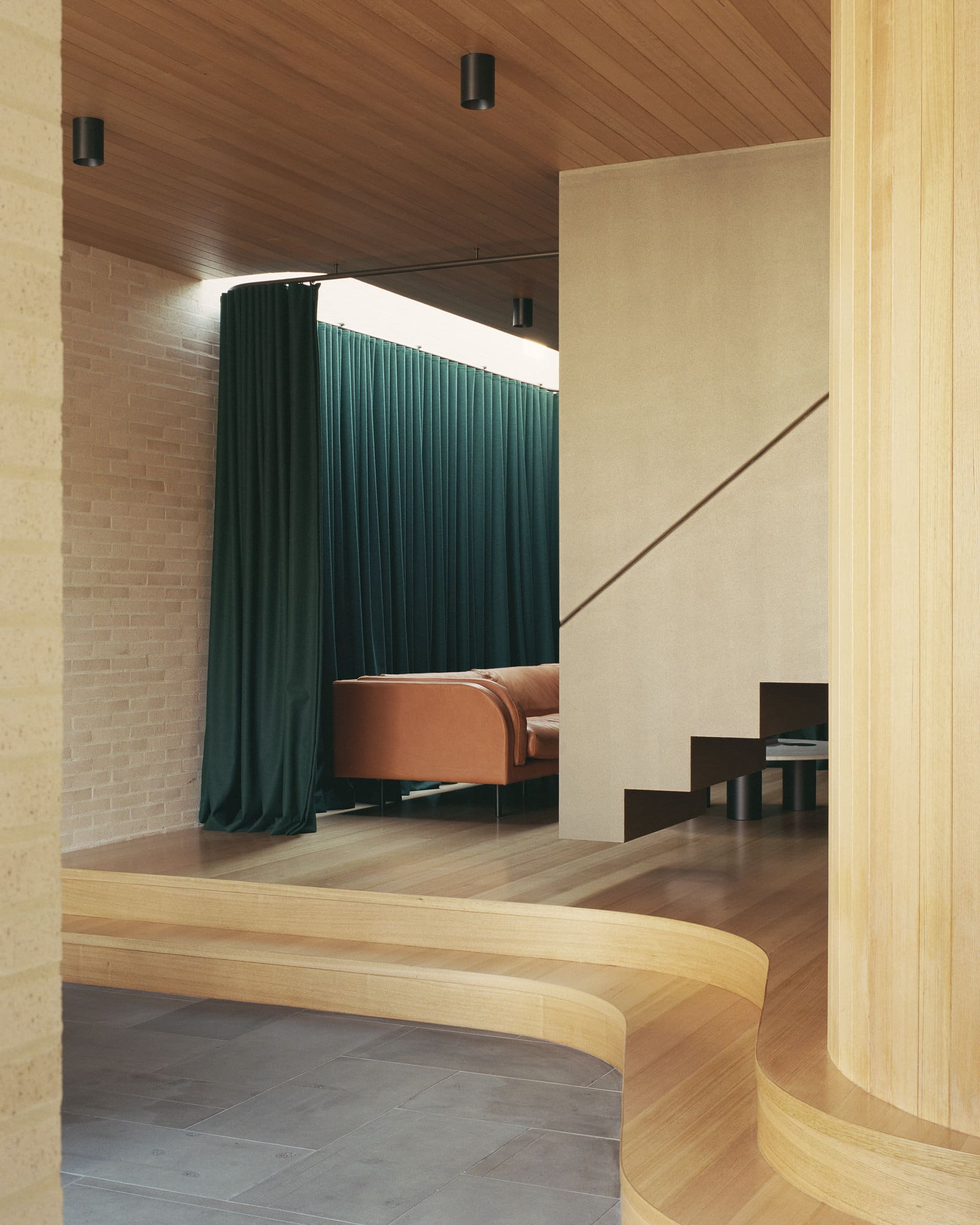 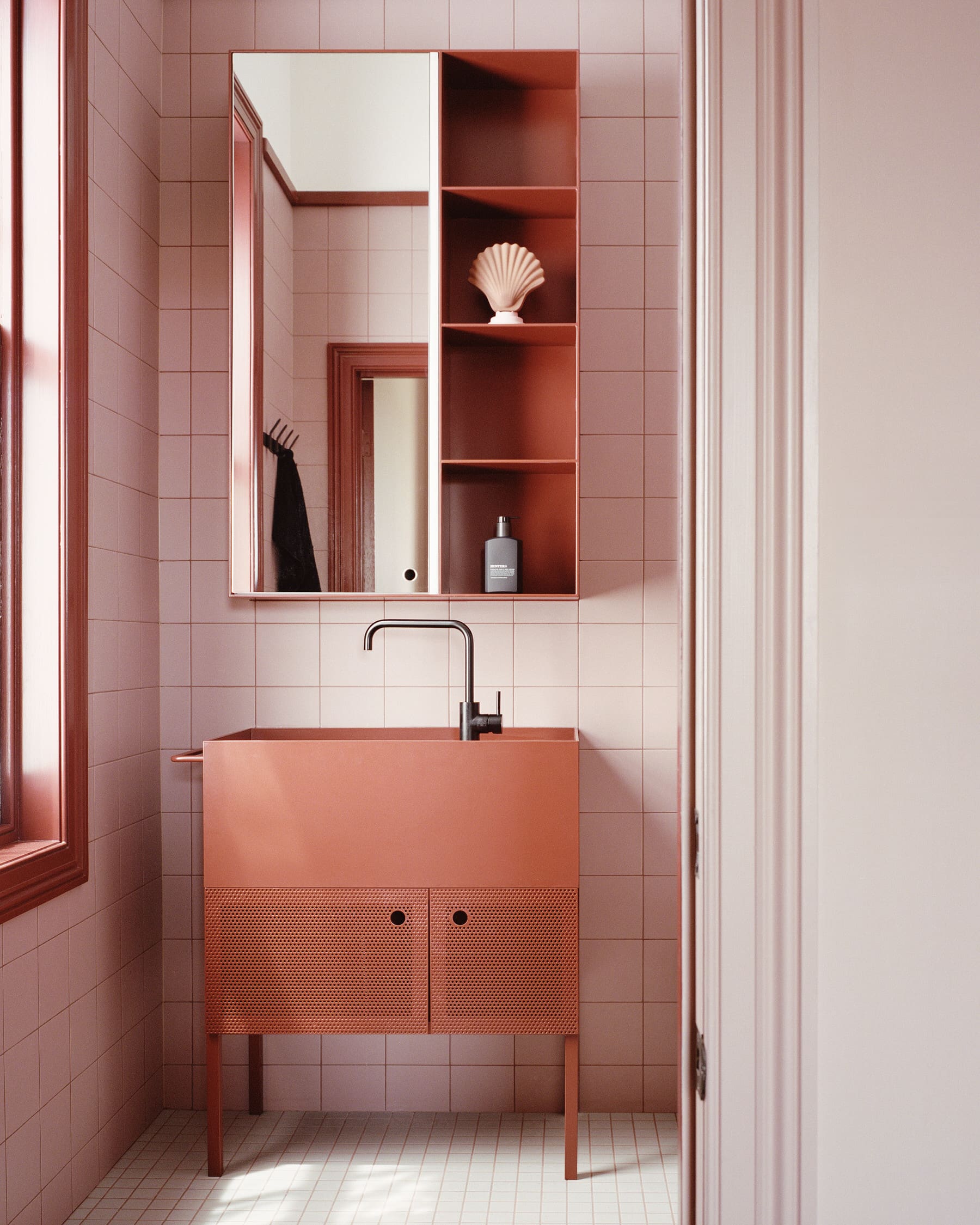 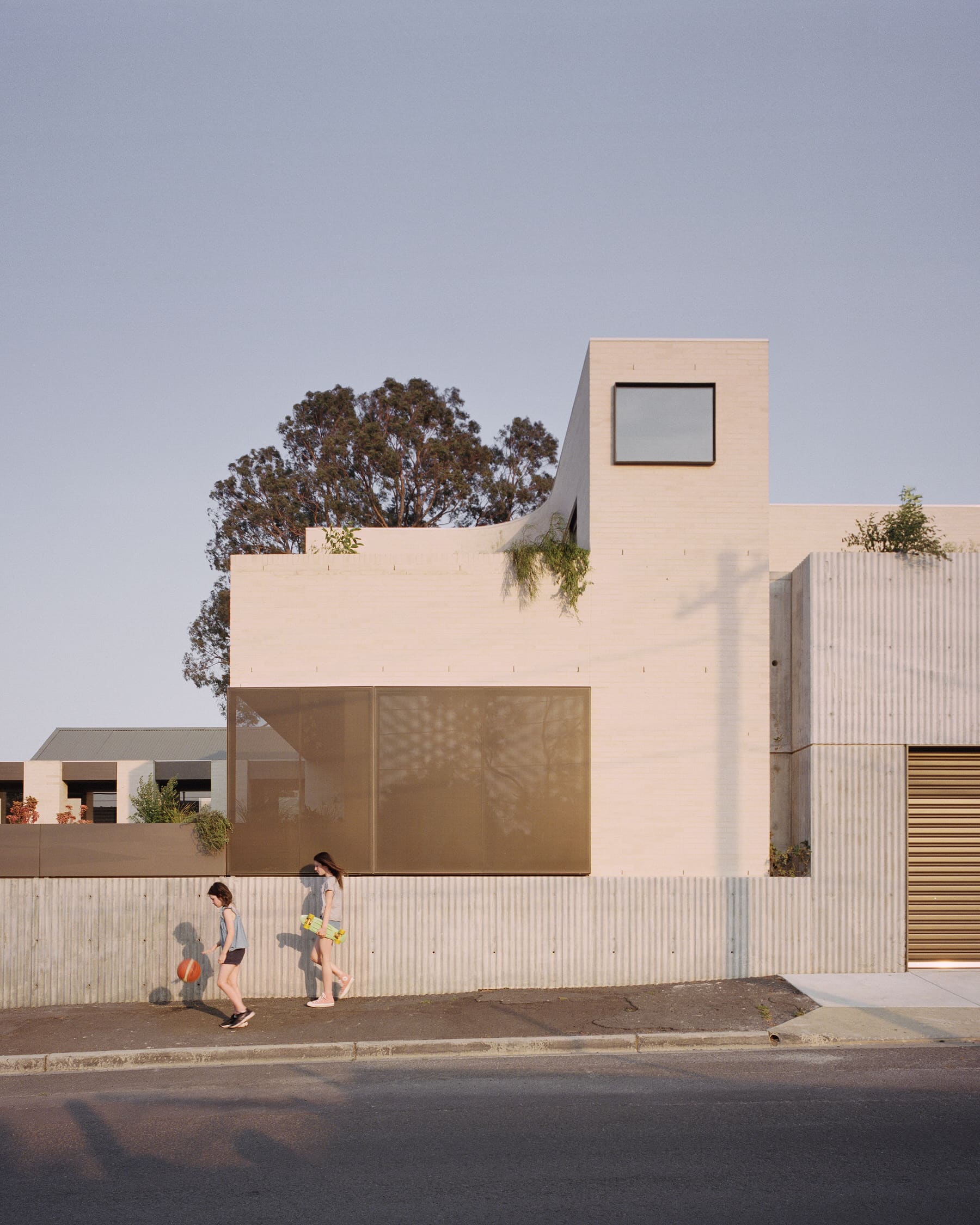 The new addition comprises the communal spaces of the home including the kitchen, dining and living room on ground floor as well a library, guest room and study on the upper floor. Geared towards flexibility, each space has been designed with multiple functions in mind. The living room, for example, can be “a music space with a heavy curtain ready to be drawn across to present impromptu theatre, steps forming the stage edge,” Bright explains.

The integral link between the period home and the rear-garden pavilion is the bridge-like sequence that knits the two entities together. The enclosed brick form is akin to a Roman aqueduct (but inverted) and is a pathway space that is full of possibility. The link has been intentionally left undefined to encourage creative uses such as a veranda to the garden, a poolside chaise or even an indoor cricket pitch. Flanking this link is a garden on one side and the pool on the other. Ingeniously, the pool is contained in a room-like fashion freeing the backyard from the usual pool fence requirements.

Although Studio Bright have responded to the Edwardian heritage of the house, they also acknowledge other histories of the site. Bright describes that “at the threshold of the new and old is a commissioned stained-glass artwork by that inscribes the histories of the site and recognises the Traditional Owners of the land, the Wurundjeri people.” Studio Bright believes that “even private houses should have civic ambitions” and Ruckers Hill House expertly strikes a balance between defending internal privacy and sharing inner workings and activity with the local streetscape.