Spanish Architects Craft a Cozy Igloo for Their Daughter’s Bedroom

For two Spanish architects living and working in a cavernous, minimally insulated warehouse, the question of where to put their daughter’s bedroom was solved with an Arctic solution. Mireia Luzárraga and Alejandro Muiño of studio fashioned an individual igloo for their little one, constructed primarily from materials leftover from their other projects. 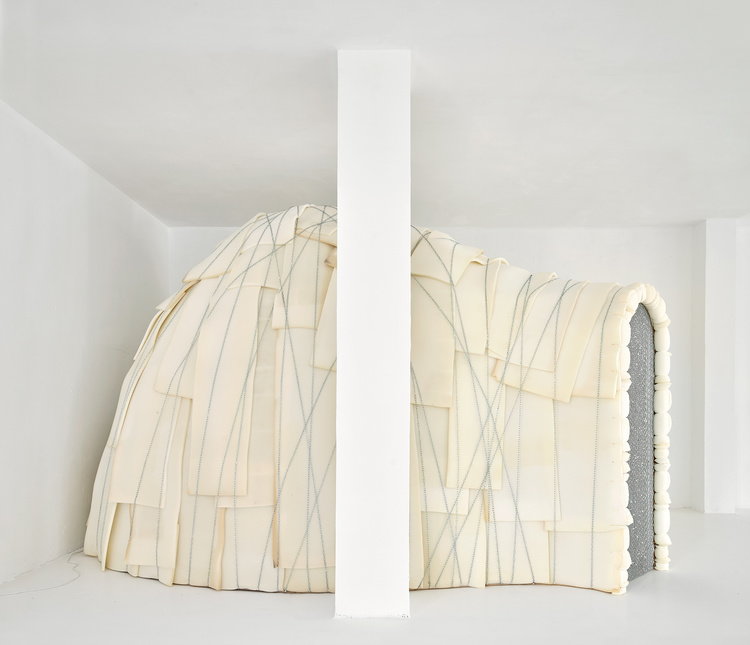 Part of the inspiration for the peculiar shape was that “the is the geometry that involves the minimum surface of the material, as well as working very well structurally,” the architects explain. 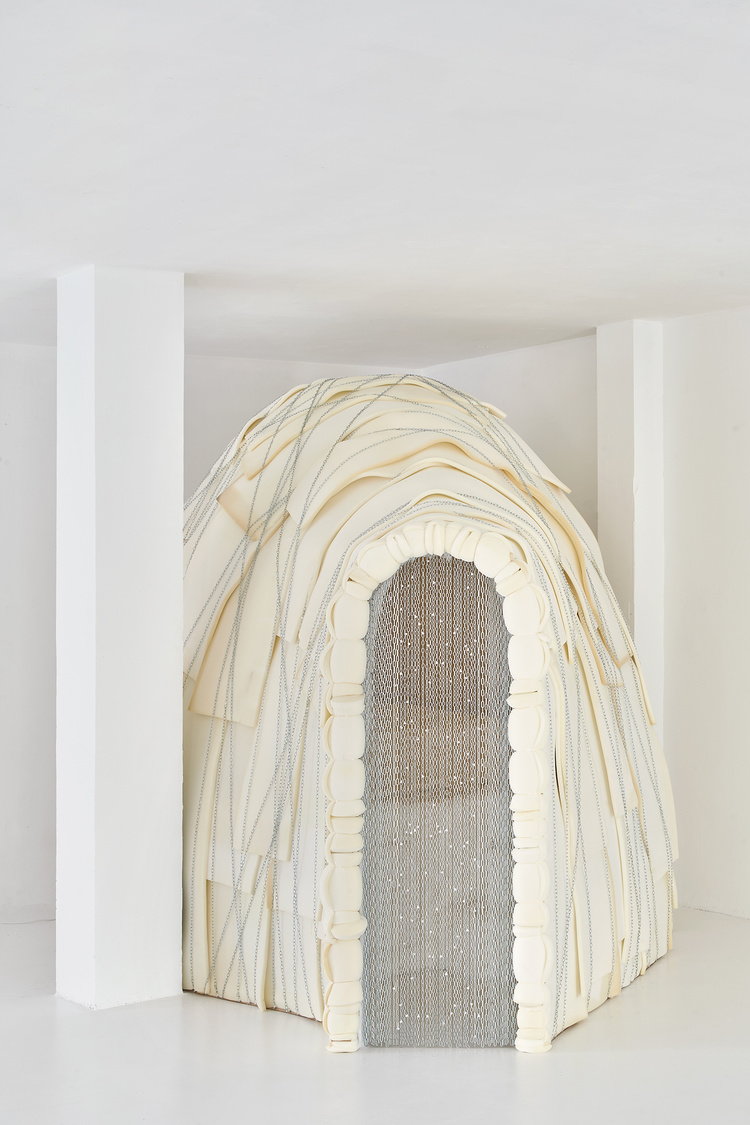 The 11.5-foot rounded structure was constructed from horizontal and vertical ribs cut with CAD-CAM technologies. The exterior was then covered with strips of cream-colored upholstery foam for maximum heat capture. “The flexible condition of the material easily adapts to the igloo shape,” notes Muiño. 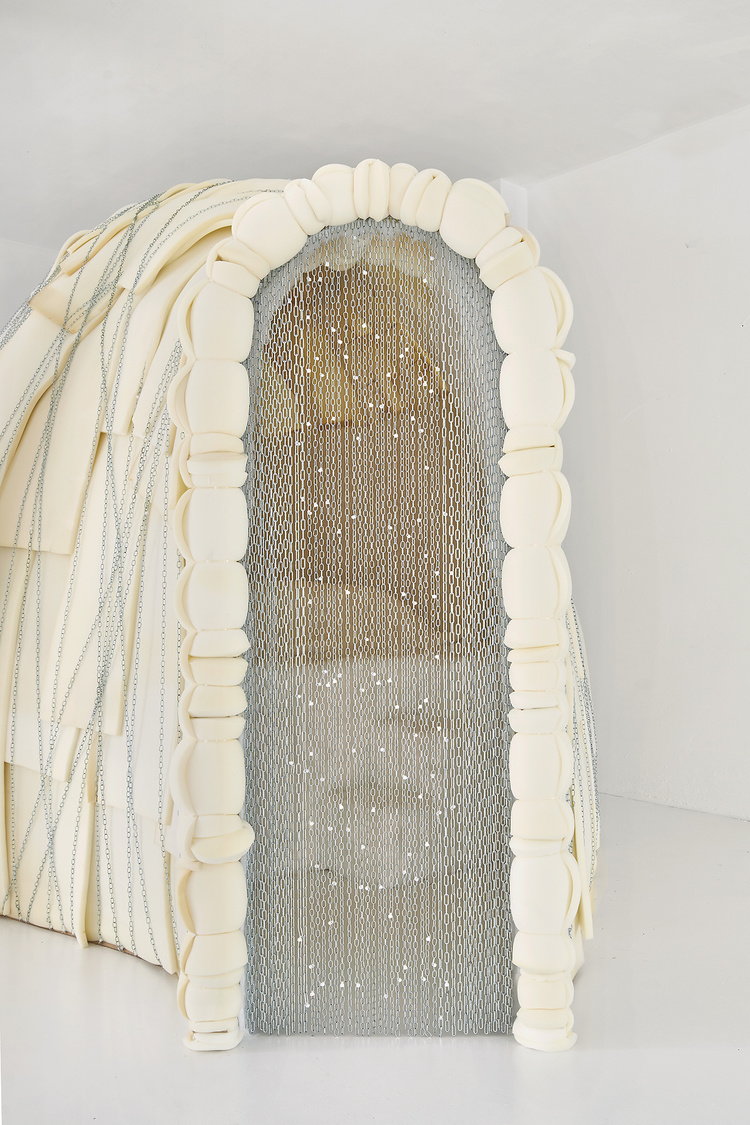 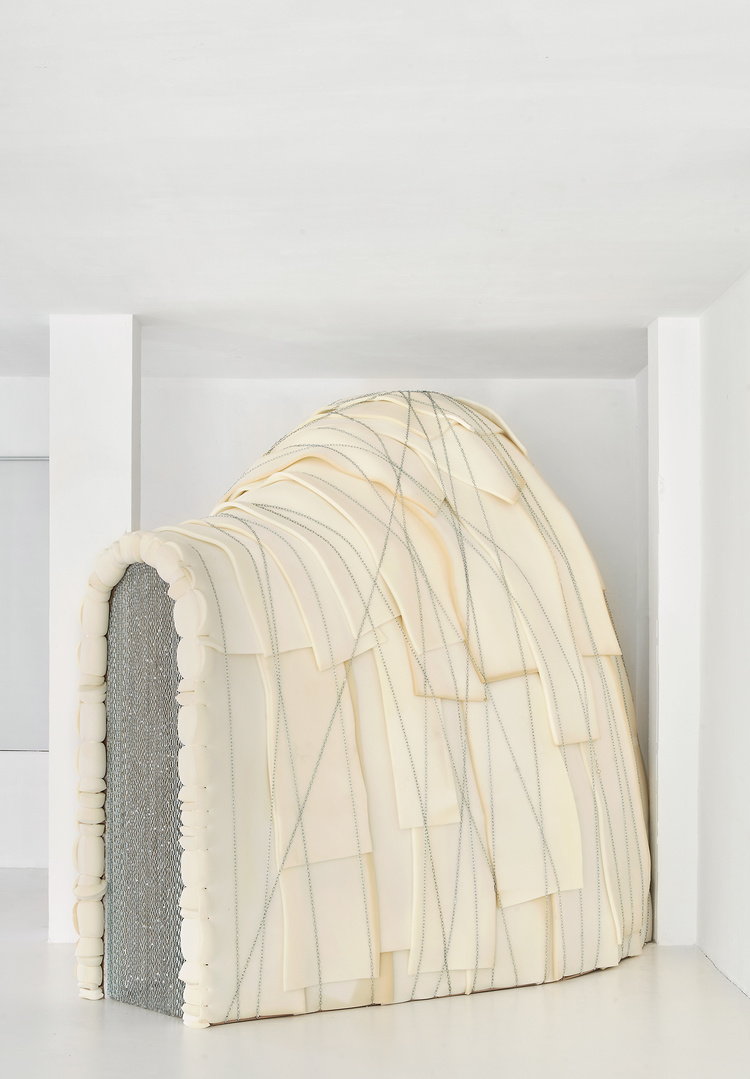 Strands of steel chains wrap the outside, securing the foam in place and giving the entire dwelling an air of security. The entryway is also draped with a curtain of the same chains, all remnants of previous design endeavors. “This solution made out of individual vertical elements allowed us to adapt to the arch-shaped entrance as a regular door wouldn’t be able to do,” the Barcelona-based architects said.

The inside of the igloo is a cozy winter wonderland. “The interior space has a floor at a height of 90 centimeters (three feet) where the mattress lies, all covered in a white furry carpet ready to be enjoyed barefoot,” Muiño adds. “Below this big bed, there is a space for storing, playing, or hiding.” 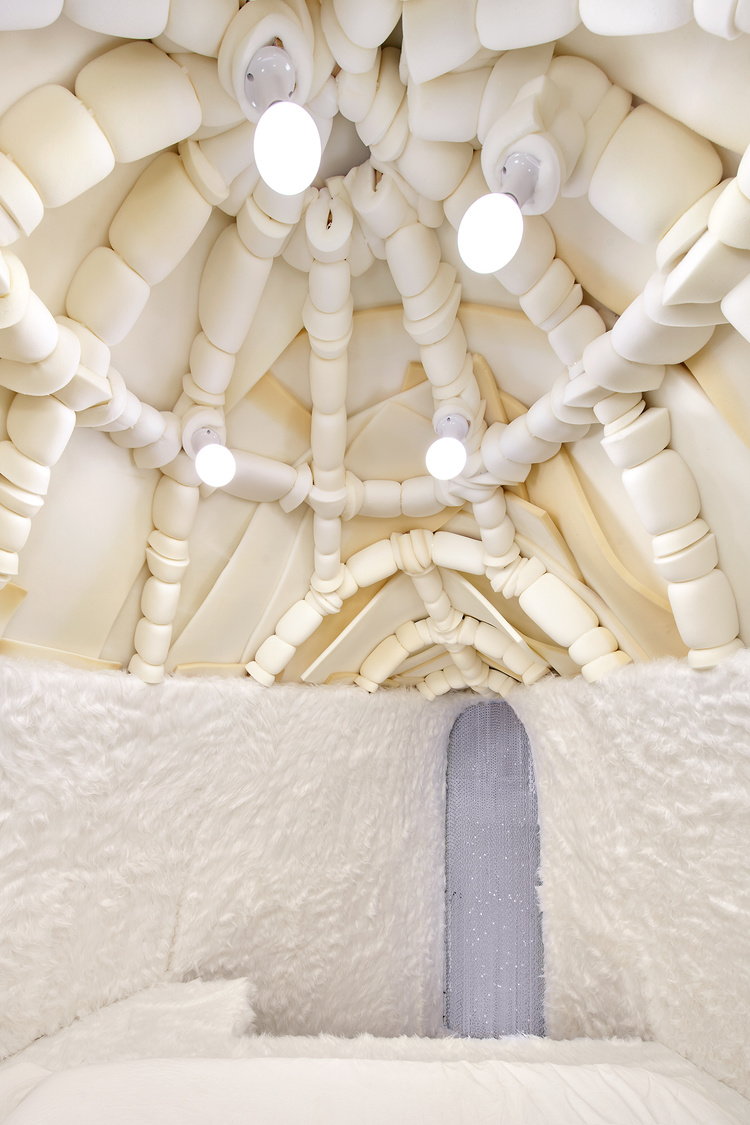 Everything inside sticks to the arctic theme. In addition to the polar bear-like material coating the walls, bed platform, and stairs, the arched beams are bound in more cream-colored foam, the bedding looks like swiss cheese, and the lighting gleams in ivory. There are also six globe lightbulbs placed strategically at the top of the dome, simultaneously providing the impression of gazing up to the stars at night and warming the otherwise-cold loft space. 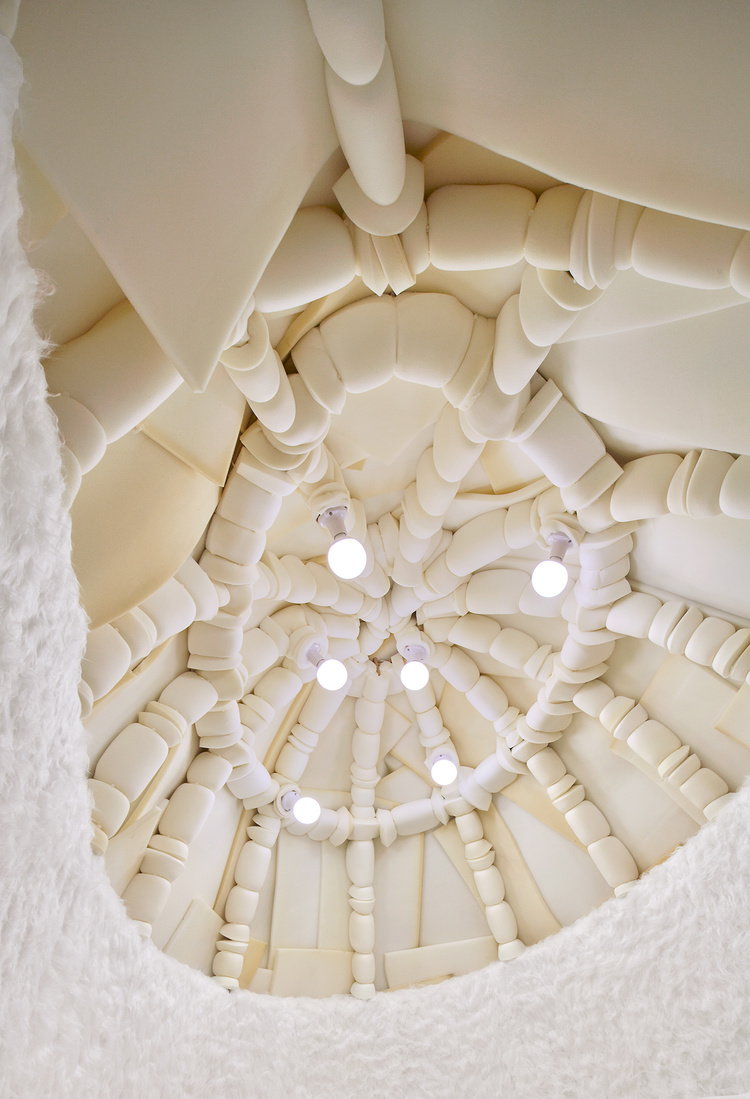 While unconventional as a residence, living in a warehouse provides the couple the freedom and flexibility they desire for immersive designing. “The house-workshop is a 400-square-meter (4,305 square feet) space that can host the installations that we design and produce,” says Luzárraga. “At the same time, the space is being colonized by some domestic spaces that condition it for living. It’s continuously changing depending on the work that we are developing. Some of the pieces stay forever, and some of them are temporary.” 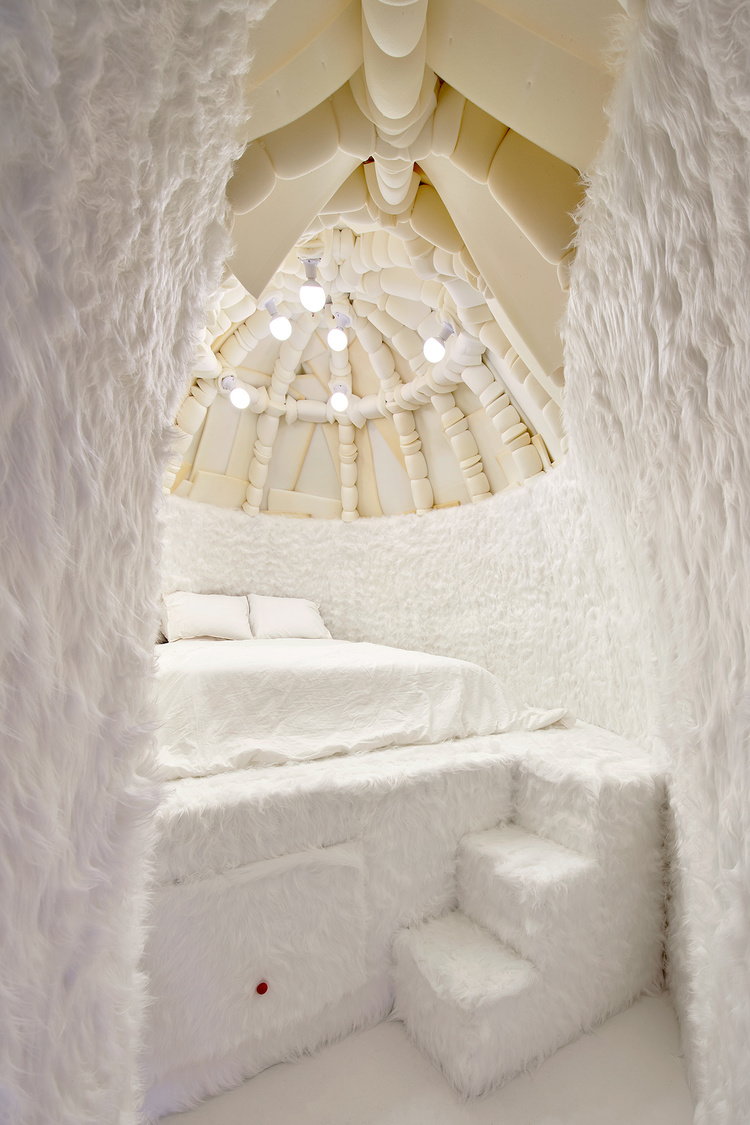 Luzárraga and Muiño founded Takk in 2008 after both earning architecture degrees in Spain. In their own words, their work focuses on “experimental and speculative practices in the intersection between nature and culture, with a particular emphasis on the overcoming of anthropocentrism.” In 2012, the team won the Konecta Foundation prize for social architecture with their “Suitcase House,” an accordion-folding emergency dwelling. In addition to their design work, which has been featured in the 13th Venice Biennale and the first Biennale d’Architecture d’Orléans, the couple currently teach at several universities and institutes around their country.