An Arkansas Exhibition Offers Five Responses to the Housing Crisis

It’s no secret that we are in the midst of a global housing crisis. In major cities across the world, demand continues to outpace supply, and the development of luxury condos and single-family homes has rendered affordable housing options harder to come by. Across typologies, architects around the world continue to design new ways of living that address the complex economic and social factors facing people today. 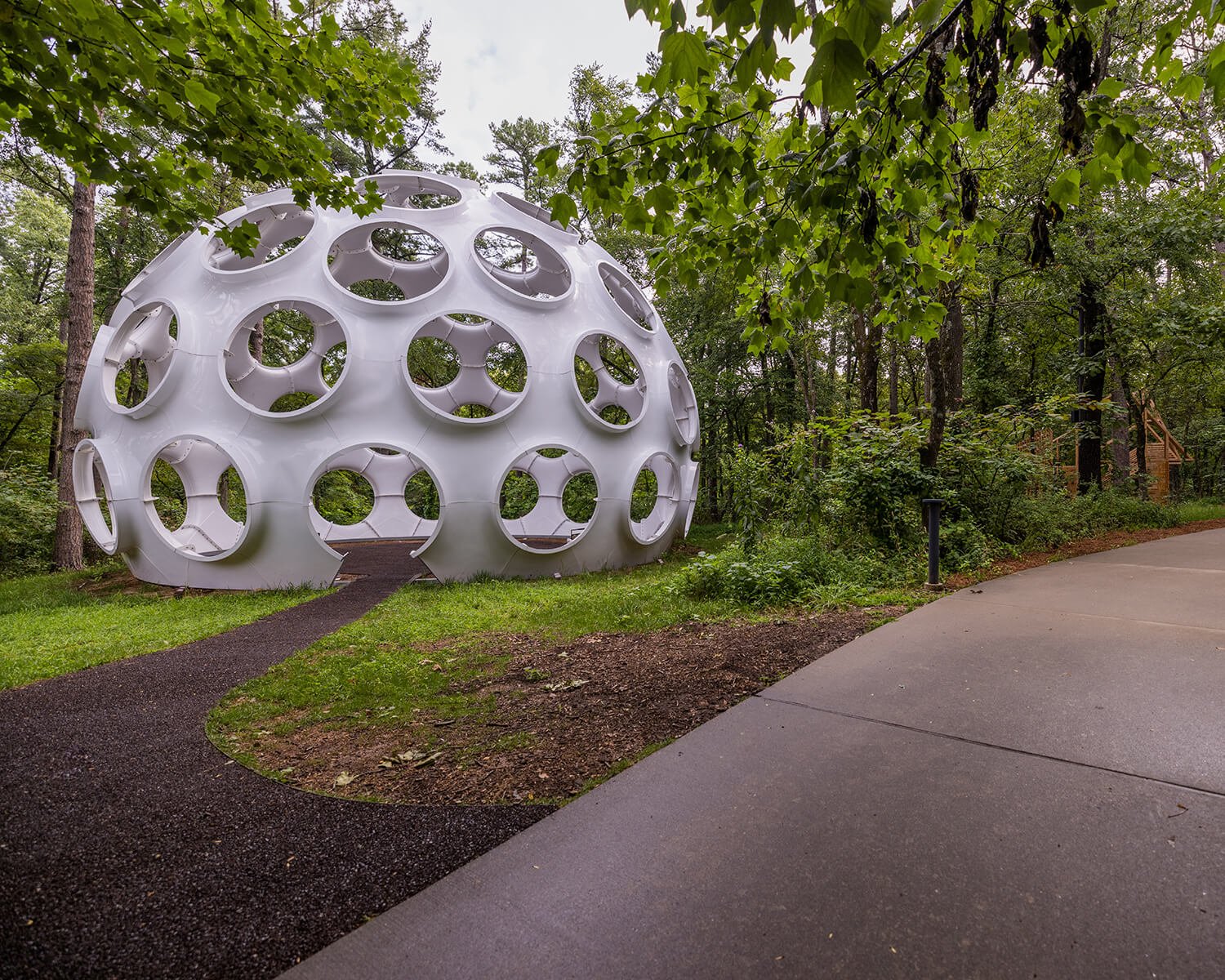 These explorations are happening outside of urban centres, too. In Bentonville, Arkansas, the has selected five contemporary firms from across the Americas (and diverse backgrounds) to develop prototypes that “examine the current housing system, our relationship with the natural world, and the history of how we got here.” The exhibition, Architecture at Home, also includes Fly’s Eye Dome, a prototype for a lightweight and affordable home designed by Buckminster Fuller in 1965. The studios worked closely with the Northwest Arkansas community to understand their unique housing needs, challenges and opportunities.

Each experimental structure embraces four key principles: emphasize the humanity of the occupants, carefully select materials, practice efficient building methods and recognize the importance of place. Below, we dive deeper into their works — five examples of “how we could live today if we designed housing that was more human.” 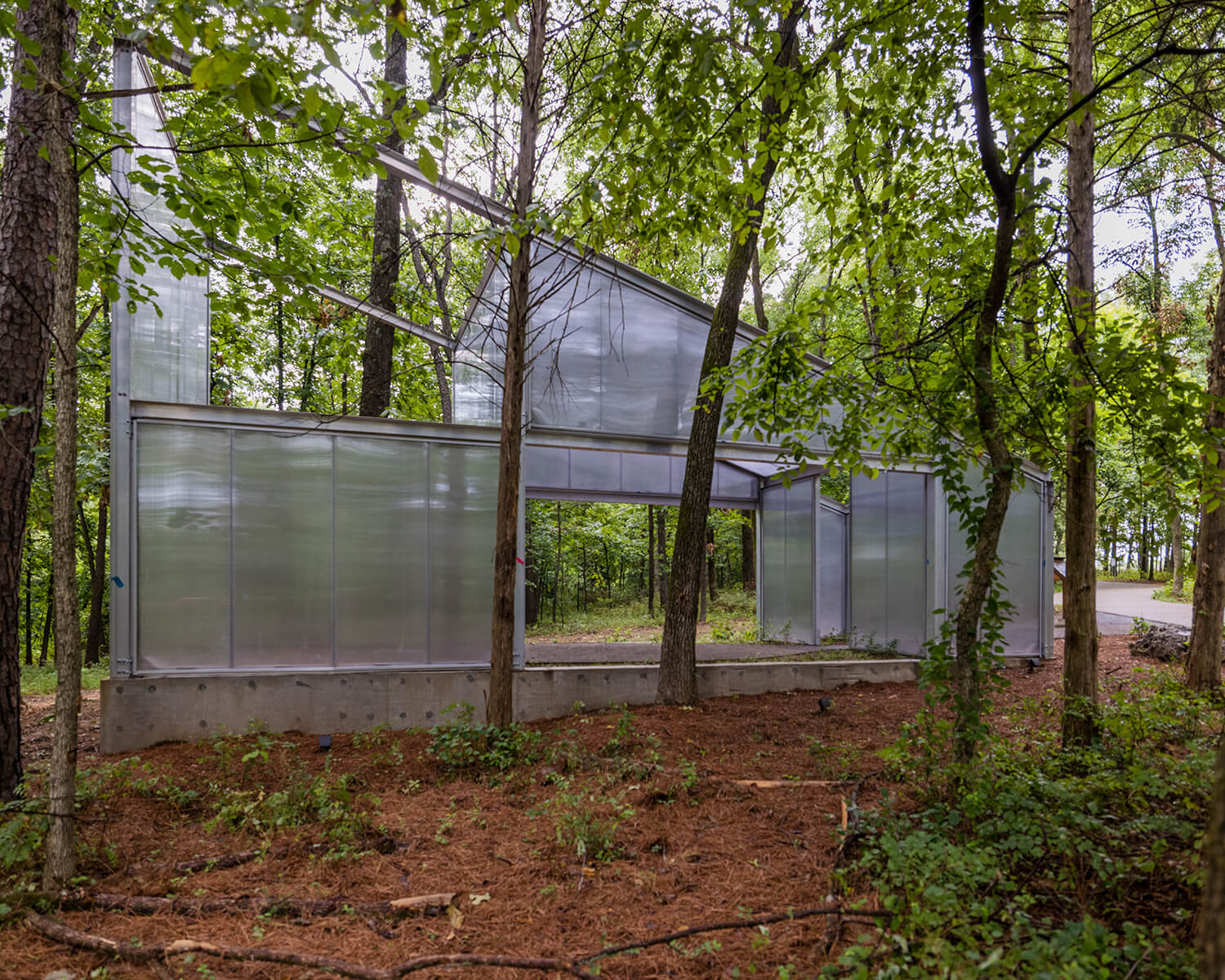 This installation by Pérez Palacios Arquitectos Asociados takes minimalism to a new level. A commentary on consumerism, which leads many people to accumulate “stuff” that takes up valuable real estate in their homes — space that could be better utilized — PPAA’s prototype doesn’t propose removing these appliances, furniture and other objects altogether, but rather to densify and gather them in a certain area, leaving more room for flexible living (which could lead to smaller homes, and therefore less impact on the land).

The firm was also interested in exploring the connection between humans and nature — which is often missing from urban and suburban areas. Merging indoor and outdoor spaces, PPAA’s installation consists of translucent walls and a soil floor, affording a flexible space with abundant views and natural light. The single structure is envisioned to be scalable, linking houses together to promote human connection. 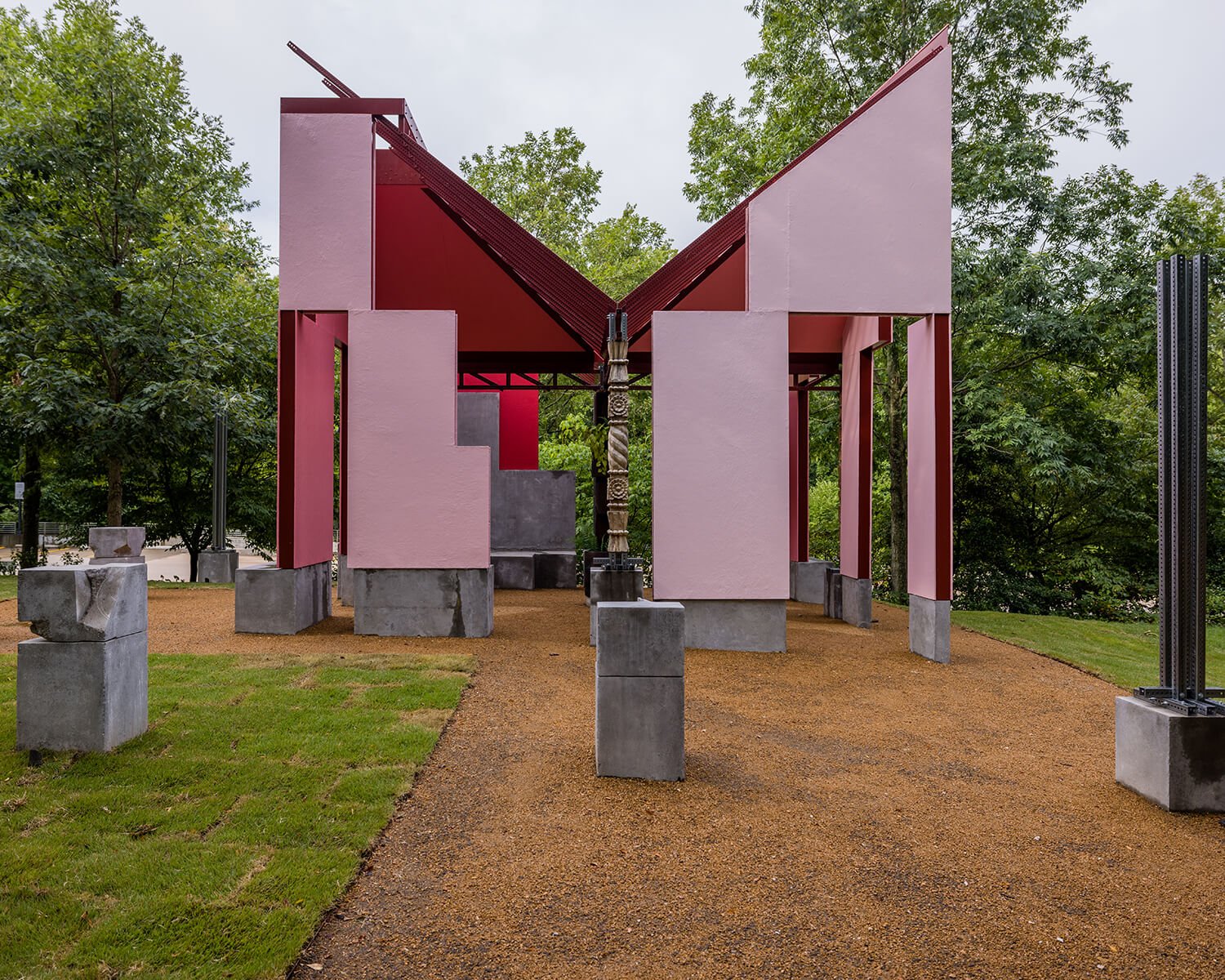 When asked to design a prototype for housing, MUTUO opted to revisit its exploration of building typologies as just “one piece of a complex puzzle.” Inspired by the many barriers that prevent people from owning homes, including systems of land acquisition, financing, permitting and construction, the architects prompt visitors to move through a rigid orthogonal column grid.

This structure juxtaposes Mexican handcrafted wood columns with pottery made by artists in Michoacan using Indigenous and mudejar techniques. Combining concrete, steel, wood and clay, MUTUO proposes a reality in which the incorporation of culture and craft can help to create a more flexible and inclusive housing system.

Not My HUD House by Studio:indigenous 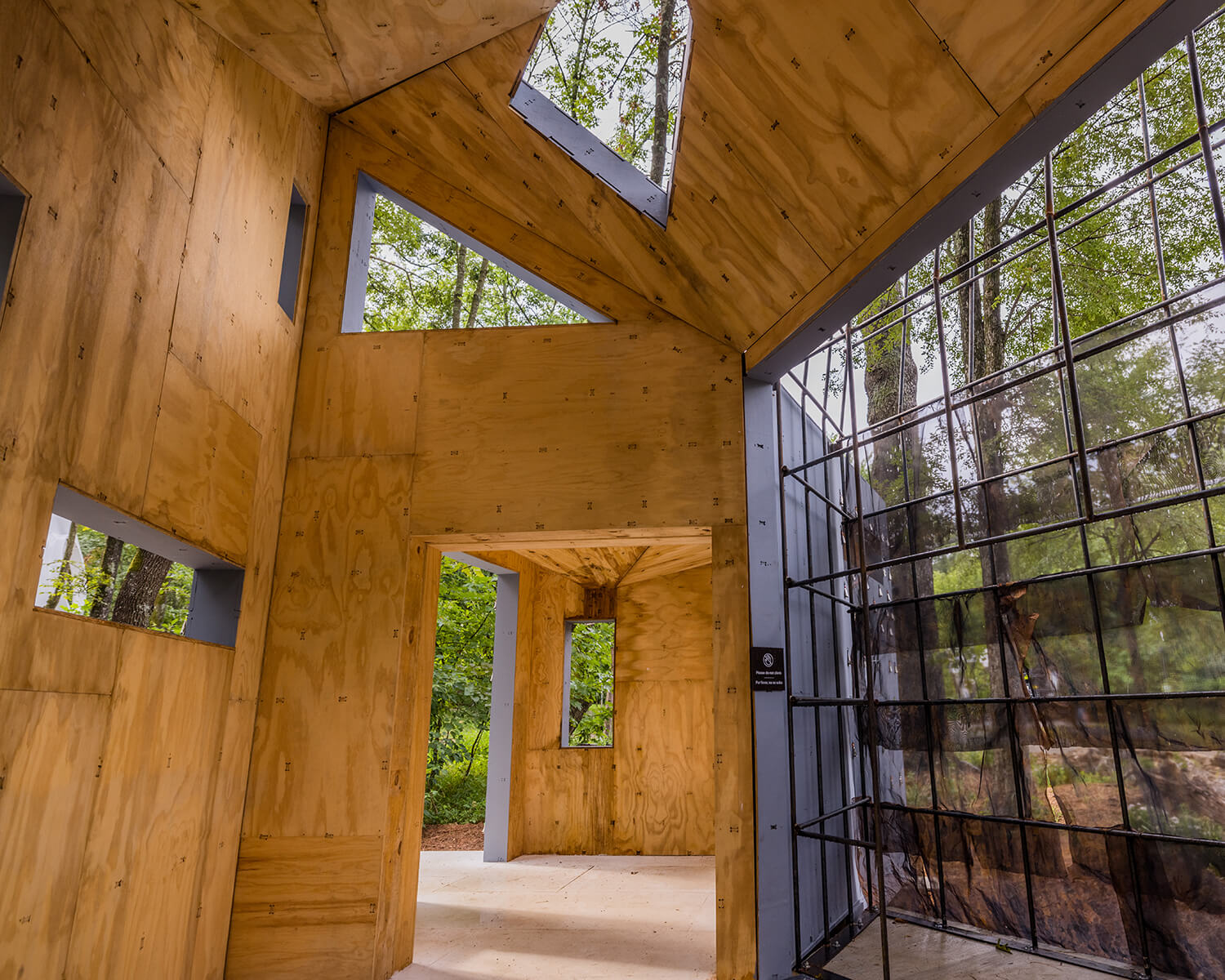 In his prototype, Indigenous designer Chris Cornelius of provides a counterpoint to the lack of quality design and construction in Indigenous communities, which is often reflective of policy and lack of funding. Here, he creates the antithesis of a HUD house, a government-designed home for Indigenous people forcibly relocated to reservations (one of which he was raised in on the Oneida Indian Reservation in Wisconsin). To decolonize the typology, Cornelius considered Gottfried Semper’s The Four Elements of Architecture (1851): hearth, roof, enclosure and mound.

Visitors enter the home through a doorway that faces east, greeting the sun. The hearth — “a place of gathering and counsel for Indigenous people” — is reimagined as a steel tower that stretches towards the sky. In lieu of distinct rooms, which are a traditionally European concept, Cornelius instead implements flexible modules that can be used for multiple purposes.

Representing the freedom and choice not afforded by HUD houses, the prototype features rusted metal “feathers” that clad the exterior. “Maybe I can fly off this Reservation,” says Cornelius. The materiality also speaks to the inherent connection between humans and animals, a key tenet of Indigenous cultures.

House of Trees : City of Trees by LEVENBETTS 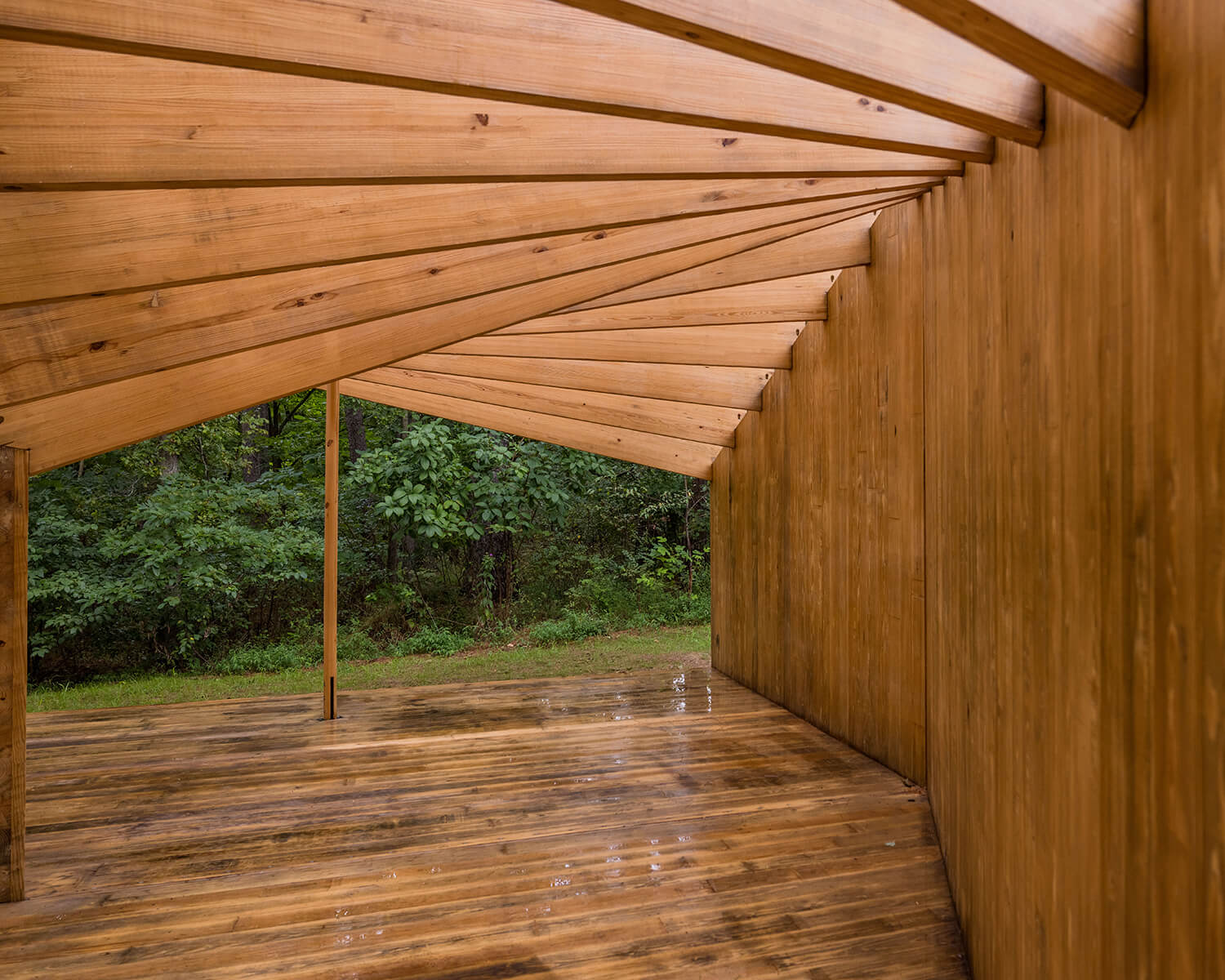 LEVENBETTS has created a pavilion that is “connected to the forest through material and experience.” Embracing the contours of the land, the entire project was locally sourced with help from regional suppliers and manufacturers — from the forest to the fabrication shop. Constructed of glulam rafters and beams and cross-laminated timber panels all made from Arkansas Southern Yellow Pine, the wooden prototype is anchored by a massive pine tree located at the centre of its courtyard.

Screw pile foundations were placed around the tree’s roots to support the pavilion and allow water runoff to flow underneath it. The space will be used to educate students about forestry, while also providing a precedent for “sustainable urbanization” to advance industry standards for mass timber housing — and in turn, develop more site-responsive communities that are connected to their local ecology. 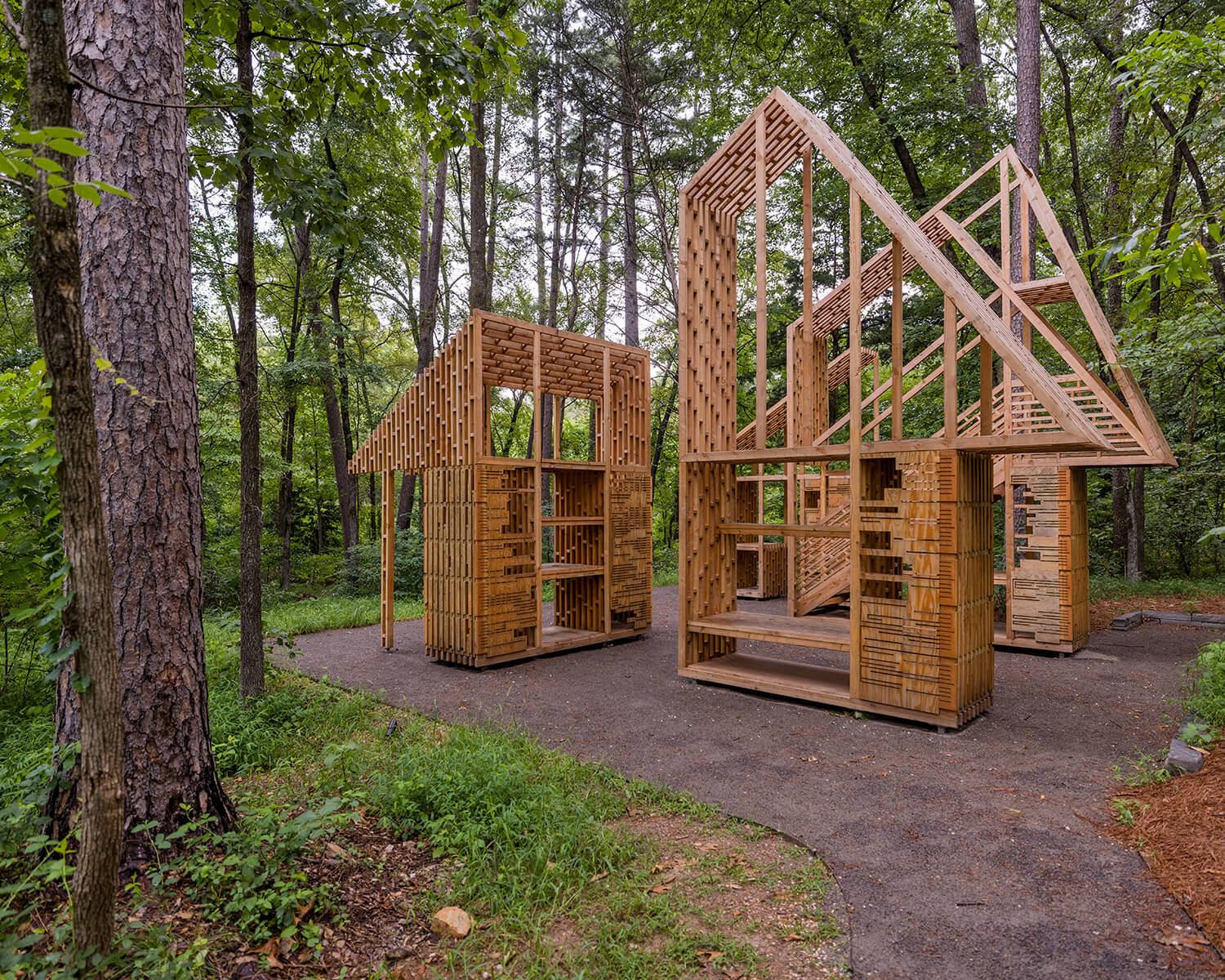 Yolande Daniels and Sunil Bald of believe that understanding the past can help us better address today’s housing needs. To that end, this installation seeks to highlight narratives of displacement of Black and Indigenous people in Northwest Arkansas. This long-overlooked history, which unfolded on trails that converge at Crystal Bridges, continues to impact the housing demographics of the region.

Comprised of four totem-like structures made of latticed Douglas Fir and plywood, the prototype serves as a timeline. It’s engraved with information about events related to colonial expansion and forced expulsion, with each totem representing a 50-year period.

From a distance, the structures appear to form an outline of a house, but up close they dematerialize, demonstrating “how architecture can express the stories of people who have been silenced.” The Totem House can be expanded into a full home for off-site fabrication; it organizes four components into a 6-by-9 metre footprint to create an economical model for wood-frame construction.

Architecture at Home is on view at the Orchard Trail until January 31st 2023 and is free to attend.