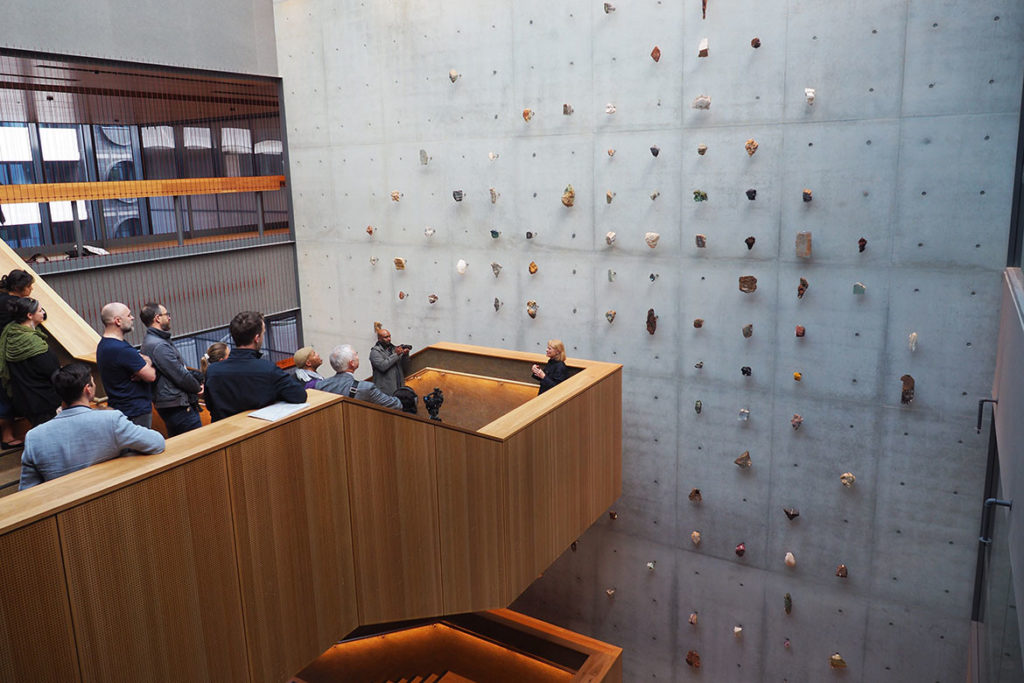 Occupying the large wall and staircase void of the designed Curtin University building, Janet Laurence’s site specific ‘Cliff’ could not be more perfect. Representing all the geology of Western Australia the work only reveals itself as a geological wunderkammer through journey and discovery.

The architecture, while appropriate for an artwork was not designed for a specific artist. Rather, the space was recognised as being the most appropriate for a public art work, and the competition selection of Janet Laurence (through Apparatus) satisfied the need for the work to be far more than decorative: “It’s hard to have public art serve so many aspects of public culture, but in an educational building, to have that as a profound part of the result, is really important to us.”

When asked to put forward a proposal, Laurence’s first thought was that it needed to be fully immersed in nature: “Western Australia is the great zone of geology, a vast range of rocks minerals and gemstones /crystals that form the earth through processes and formations throughout eons of time,” she says.

Moreover, she felt the work needed to engage on multiple levels: “Cliff brings you the earth not as a representation but as presentation of earth itself, in the form of rocks each with its geological story – of time, weather, movement and formation.”

Laurence had an immediate simpatico with Wardle’s feeling for the building as a Wunderkammer, a cabinet of curiosities to be explored, with Laurence drawing a parallel to the 1760s drawings of Giovanni Battista Piranesi: “There were two things that stuck in my mind. One was this huge concrete wall, which I knew would be really beautiful. And the other was the staircase really excited me: A Piranesi staircase, with all the viewing platforms, and I just thought, what a beautiful opportunity to be able to look at something in detail.”

From this perspective, the architecture becomes a way for reading the artwork: “If the building is a wunderkammer / a cabinet of curiosity, these stones can be seen as exhibits, like presentations within a natural history museum. Creating a mapping of landscape, offering a non-didactic educative experience, a surprising and fresh way to see these rocks removed from their normal systems of storage or exhibition mode. Every rock has been donated from historic rock-hunter collections, brought from a private space into a public space for us all to enjoy,” says Laurence.

Working from a studio in Freemantle, with a floor as big as the wall, Laurence was able to map the rock placement precisely. In consultation with geologist Pete Kinny Professor of Geology Curtin University and by writing to WA rock collecting groups, Laurence gathered rocks representative of the whole of WA’s geology.

Ranging in size from a hand to a football, it is not size or mineral that indicates degree of preciousness, but age. For Laurence and Wardle, it was also important that the science behind WA’s wealth be explored in the work, particularly in the building’s context of education, as Wardle explains.

“I think there is something instructive for the students in its [the artwork’s] mute but very powerful way, there’s an overt link between the raw material of what we deal with as architects,” says Wardle, “but I like to think that there are broader conversations that the work prompts – about politics, about the ways wealth in this part of the country has been accrued.”