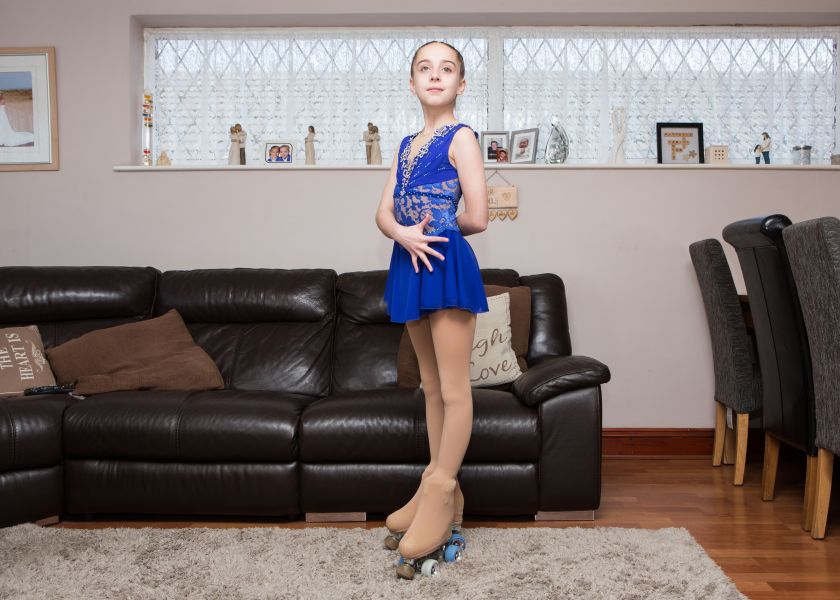 Amber holds herself proudly in her parents living room.

Returning to a childhood passion is often a bitter-sweet affair. Professional photographer found herself returning to her early years as a roller skating fanatic, which was not only about rediscovering her younger self but also a passion project that would take up more than five years of her life.

It led to an exhibition, The Art Of Roller Skating, which was held earlier this year at the Primeyarc art gallery in Great Yarmouth.

The work is reminiscent of the documentary photographer Martin Parr’s images, who takes an intimate, poignant look at British communities and records the social classes of England.

Besford’s work explores the world of the young female roller skater, drawing upon her own experiences. As a child of nine, she had some free roller skating lessons at the local rink in Great Yarmouth, where she was born and raised.

She enjoyed it so much as a sport and soon became obsessed with it, training every evening and weekend. In fact, she became a champion roller skater and was a national association skating judge for many years.

As with many of us, our teenage dreams fade away. After years of working as a professional photographer and university lecturer, an idea started to take its seed around seven years ago. “I was visiting my parents in the house I grew up in and started to think more about the environment and the place you live.

“It made me think about the years I used to roller skate and how it shaped me as a person. It gave me confidence and taught me about handling disappointment and success.” 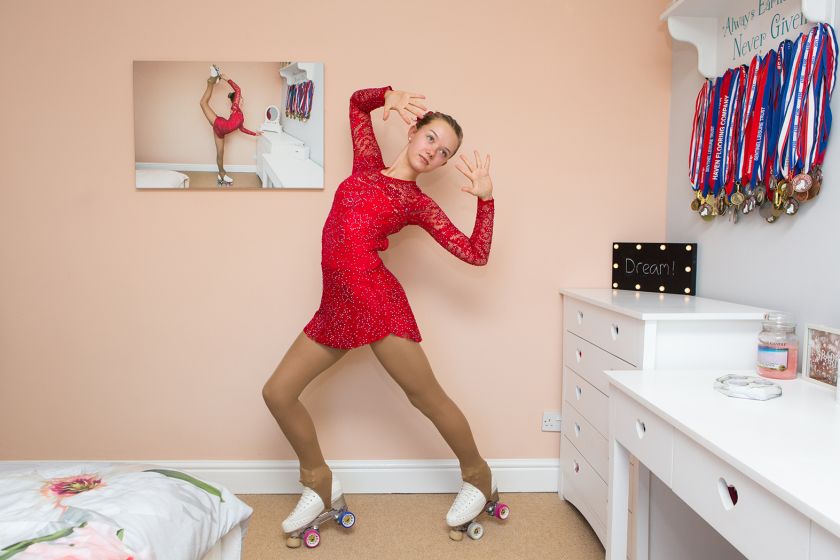 Ellen in the red dress, dreams of more medals.

Besford started revisiting the rink in Great Yarmouth and told the coach she met there that she was interested in photographing the sport. It turned out to be a project that focused on women and girls in sport.

Collaboration was always important, which included talking to the young skaters and their parents. The skaters chosen were those who felt most comfortable with being photographed, and then it was pared down to seven skaters in the final stage.

“I really liked the idea of taking the spotlight out of the rink and bringing it into the domestic environment and photographing the skaters in the home rather than capturing them on the rink.”

The images capture youth, vitality, pride and confidence – all the elements you would want for young women.

“I collected statements from the skaters, who wrote about having another life outside of school, the skills and ability to express yourself on skates and keeping fit.”

I wanted them to have a voice, says Besford. The statements “are full of reasons why they are so happy they have found a sport they enjoy and can express themselves through.” 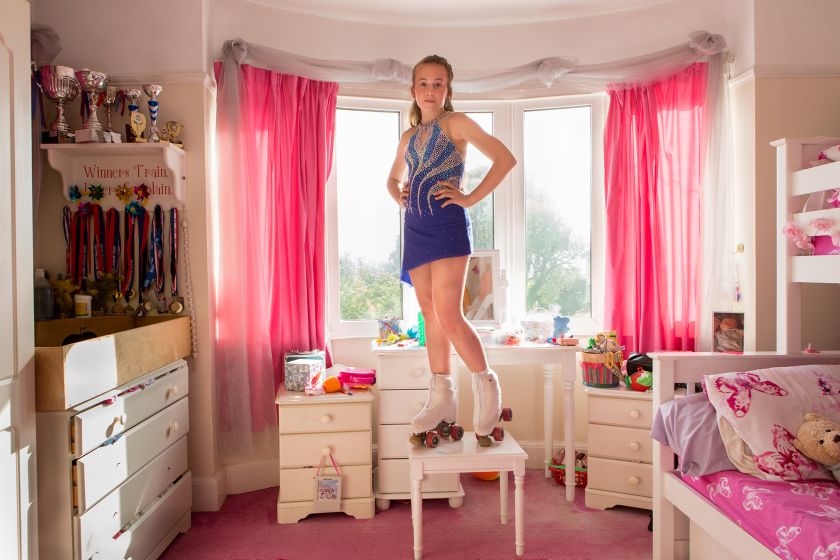 Molly balances on a makeshift podium in her bedroom.

It’s also a homage to the families of the skaters, “especially from a working-class town. Parents have to work overtime in order to give their children what’s needed for competitive skating – which costs a lot of money – such as travel and equipment.”

The images were shot in the homes of the skaters, with Besford using a tripod or speed light, a flash on the camera. Sometimes several lights were used – studio flashlights with soft boxes just to even out the light in the room and minimise shadows.

“I wanted it to look as natural as possible so it didn’t become a showroom where there would be high contrast.”

Keeping it simple, Besford would talk to the parents and the skaters about what they might wear for the shoot. “I’d arrive, and there would be this whole array of beautiful skating dresses which some of the mums created – they had such an amazing skill set. It was lovely that the parents were involved at every single stage.” 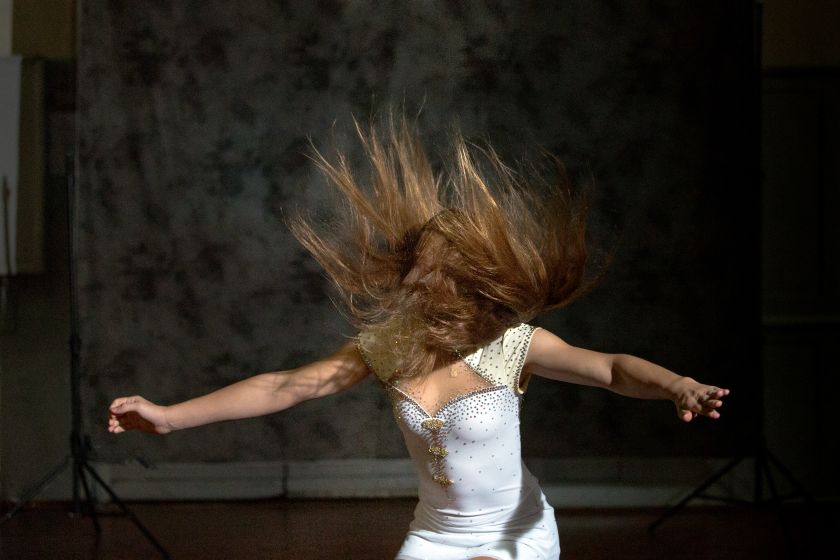 Molly executes a jump, her hair wild and free.

While the skater was getting ready, Besford would think about what colours would work in the picture, often picking out items to focus on. In the picture of Ellen in a red sequinned dress, we see a collection of the numerous medals she has won. She strikes a pose, her gaze distant as if dreaming of future trophies and accolades.

As Besford explains: “It was a celebration of artistic roller skaters who became champions at an international level. It was to emphasise they are people like you and me – and to encourage other young people.”

Having the roller skating project at Primeyarc in Great Yarmouth was exactly where Besford wanted it to be, celebrating the heritage of the sport in the seaside town, where it has been popular for more than a century. 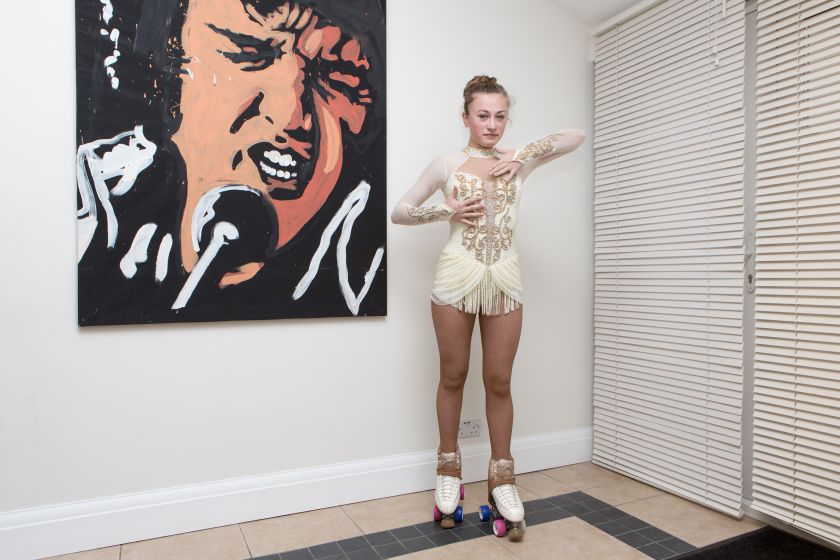 Dulcie in her sparkly sequins strikes a pose.

Primeyarc’s gallery space is the old Debenhams store. For anyone pondering the death of the high street, opening up these now-defunct department stores as exhibition spaces seems an obvious choice.

The exhibition even had a roller skating rink in the middle, which literally brought the images on the wall into 3D.

Part of the show included video clips shot at 200 frames per second. It captures a skater preparing for the jump, the flow of the hair, the concentration and the set muscles around the mouth as she prepares for take off. The light captures the sparkle of sequins and the smile as the turn is perfectly executed.

The idea behind it was a recurring dream that Besford had. “I was just about to take off, and I was flying through the air and landed. The feeling was euphoric. I would wake up and be really happy – it’s about what happens to your emotions when you take off.”

After the exhibition in Great Yarmouth, it then went to Coal Drops Yard in Kings Cross by the Museum of Youth Culture – where they had a pop-up space.

At the moment, the project is in Besford’s studio. She is waiting to hear from several studios in the new year who may want to show it. 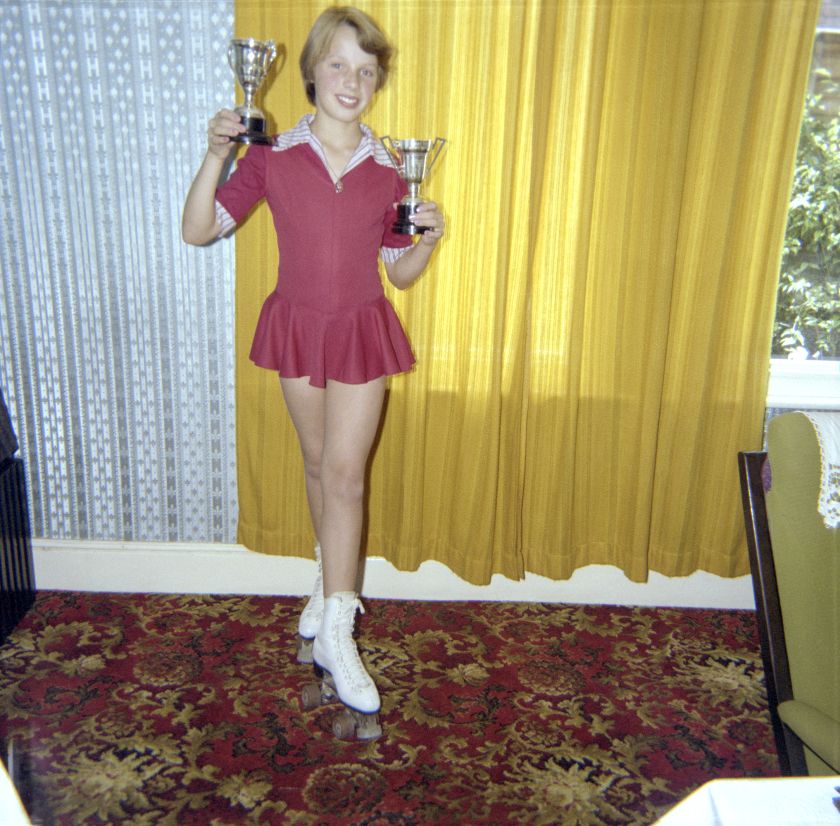 Not quite, but almost hanging up her sequinned dress, Besford has moved on to a new project. She is currently working on photographing model boat people in Great Yarmouth. Mostly, they are from an older generation and predominantly men, unlike the roller skating project. Many are ex-royal navy and ex-marines. “I’ve got a whole series of portraits of people with their boats – I’ve got them to hold their boats like a baby, so they are all consistent.”

Since the death of her parents, Besford has been working part-time out of the familial home in Great Yarmouth. “A lot of my work is retracing my childhood in a sense – remapping and then thinking about where I’m at now as a professional photographer and a human being. Thinking about my own world in Great Yarmouth now, as to when I was a child.”

So much of photography is about trying to capture a specific time and place. Besford’s roller skating project exemplifies this, asking important questions about identity and a sense of belonging.