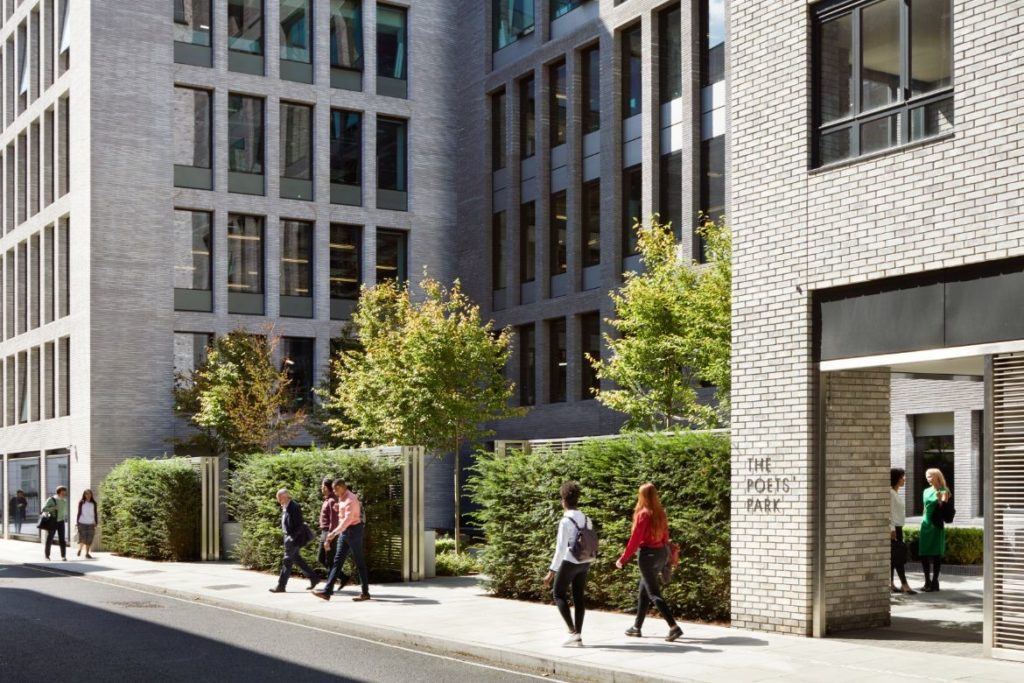 Deep in the dense urban fabric of central London, Fitzrovia is a pocket of historical and architectural significance. In fact, Make’s recently completed project is only a short walk from the — just as well, given its recent award success.

In the , the development for 80 Charlotte Street won in the commercial workplace category. The mixed use project was recognised for its exceptional attention to detail, hybrid workspace, social amenity spaces and innovative approach to .

The emphasis on sustainability is in the all-electric design of the building. That is, no fossil fuel, CHP or diesel! The building uses renewable electricity but, importantly, this design also means that it remains open and adaptable to future energy supply changes such as renewable gas.

Smart architectural moves achieve further climate performance benefits and green energy credentials. As Jason McColl, project architect, explains, concrete was used in such a way as to allow for the use of recycled aggregates and to create thermal mass.

In fact, intriguing and clever design moves can be found right across this project. A key organising principle has been the relocation and consolidation of the existing building’s cores into the centre to allow for three atria to punch through the corners. Each atrium draws in light and ventilation, allowing for recycled fresh air.

Moving from inside to outside, the atria find architectural expression in the external cladding. A language of fragmentation is created through divides in the façade that correspond to the atria and break up what is a rather large volume.

The size of the building – increased from seven to ten floors and occupying a full block – is a challenge that Make has met with refinement and subtlety. As McColl notes, “this is a site-specific project with a real crafted ‘artisan’ feel; it’s not a homogeneous or an ‘off-the-shelf’ design.”

The additional three floors, for example, have been set back to reduce the mass of the building while the visible facades blend old and new. A playful and varied use of texture has the effect of fragmenting the building, avoiding the feel of a monolithic, alien block dropped onto the site.

Instead, the architects have threaded the building into its local context: “The form harnesses the character of Fitzrovia and the result looks like a number of different blocks rather than one,” says McColl.

In fact, the designers found inspiration in multiple artistic and architectural sources, as McColl explains further.

“We were greatly inspired by mid-century modern architecture and the sculptor Donald Judd, with concepts that evolved around the language of frames, crafted from a variety of materials that provide texture, contrast and honesty in structural expression.

“The building has a strong architectural language created by the shutterboard-marked concrete facade which dominates the building’s exterior and takes inspiration from such buildings as Denys Lasdun’s National Theatre on London’s Southbank.”

Referencing local context from the scale of architectural icons to small material finishes, Make has created a new place of work with heart in the heart of London. There’ll surely be more award-winning work to come out of both London and Sydney.