Best known for its beach resorts and vibrant nightlife, Mallorca became a major destination thanks to a mid-century tourism boom. The Spanish island reached its cultural apex in subsequent decades when local writers and artists including Surrealist icon Joan Miró settled there. And in the nation’s capital of Palma, the El Terreno neighbourhood once drew creatives from around the world (such as Jimi Hendrix and Ray Charles, both of whom played the city’s bohemian nightclubs) but eventually fell into disrepair in the 1990s after years of neglect. Thanks to its recent revitalization, dubbed Project Gomila, the historic harbourfront district is primed for a return to its glory days.

Plaza Gomila, a public square, is the neighbourhood’s beating heart. Recognizing the site’s potential, Mallorca’s Fluxà family (also the owners of the Camper shoe brand, whose headquarters are also on the island) purchased neighbouring plots around the plaza and enlisted MVRDV and GRAS Reynés Arquitectos to reinvent the city block. The resulting mixed-use development is a striking pastiche of colour, material and form, mirroring Camper’s values of heritage, innovation and creativity. 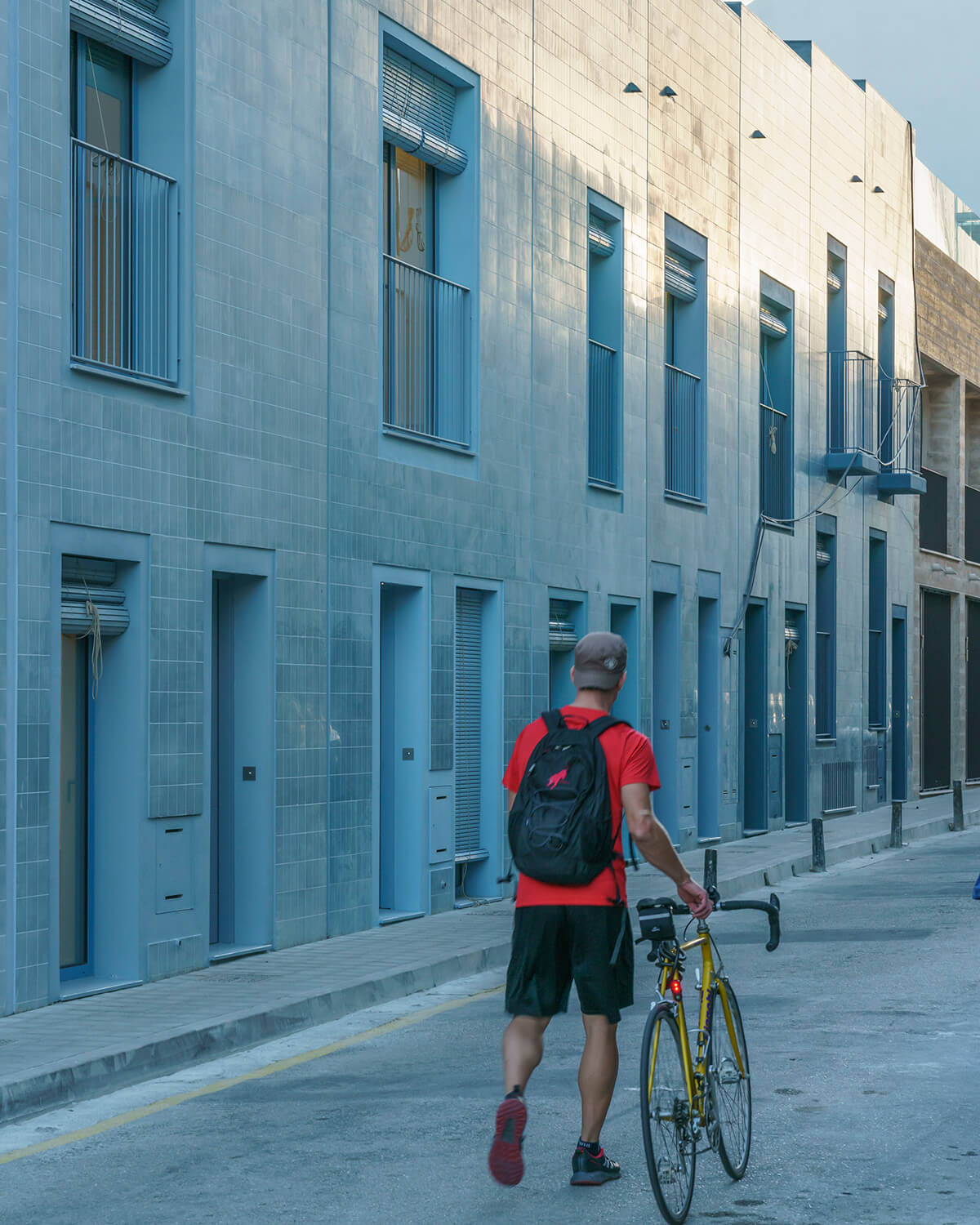 When complete, the project will see four existing buildings renovated, and three new structures woven into the urban fabric — all of which are designed to meet Passive Haus standards. “Each of the seven buildings can stand alone as its own individual design, and yet at the same time they are also carefully considered as an ensemble”, says MVRDV founding partner Jacob van Rijs. “When looked at together, you see a colourful collection of buildings that still somehow work together as a group.” 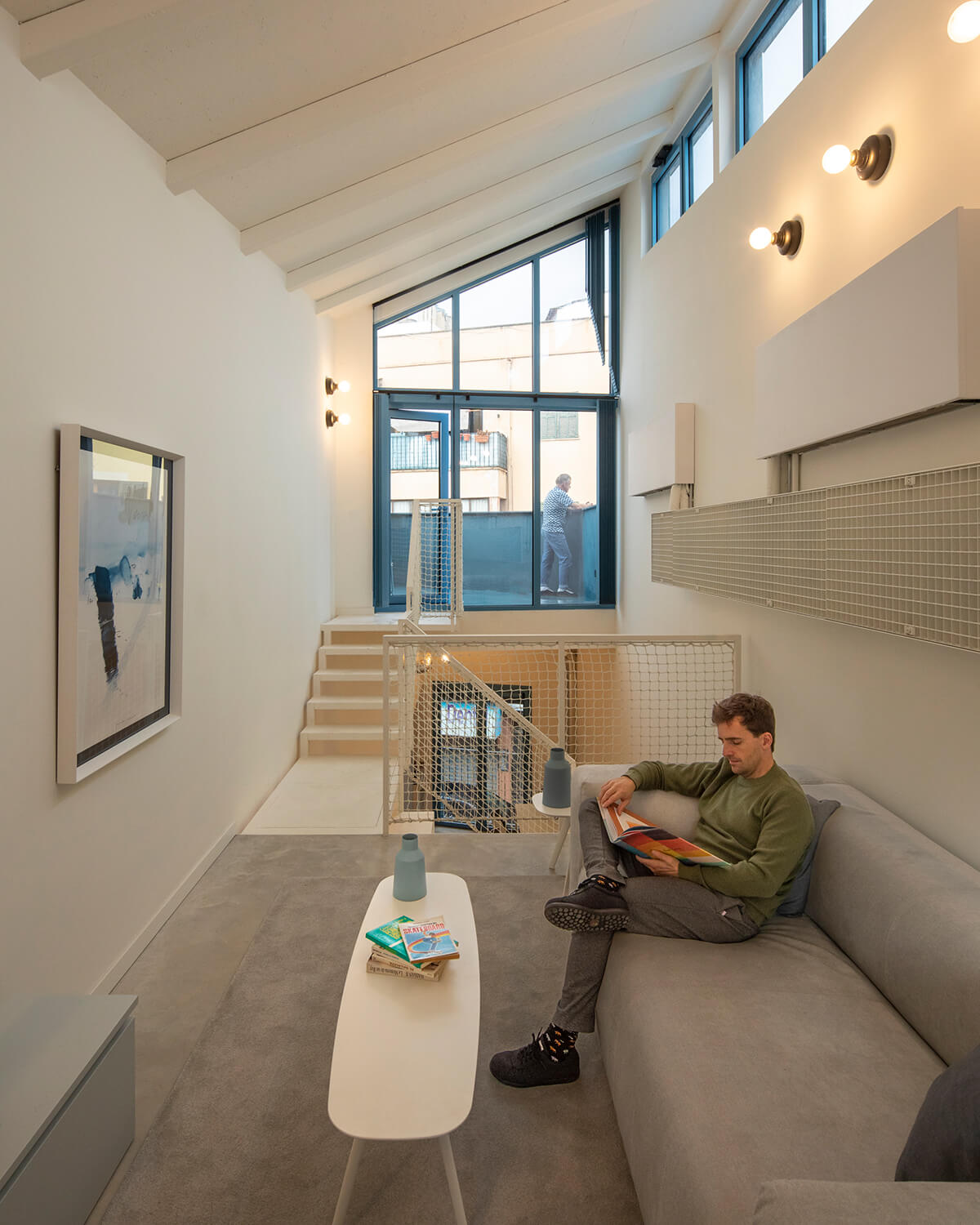 In total, the block will provide 60 rental units for local workers in a variety of sizes and styles. Public spaces such as courtyards, restaurants and bars are integrated throughout, alongside private amenities such as pools that can be accessed by all residents of the complex. “This diversity of people and spaces will help bring back El Terreno’s lost vibrancy,” explains MVRDV founding partner Winy Maas. 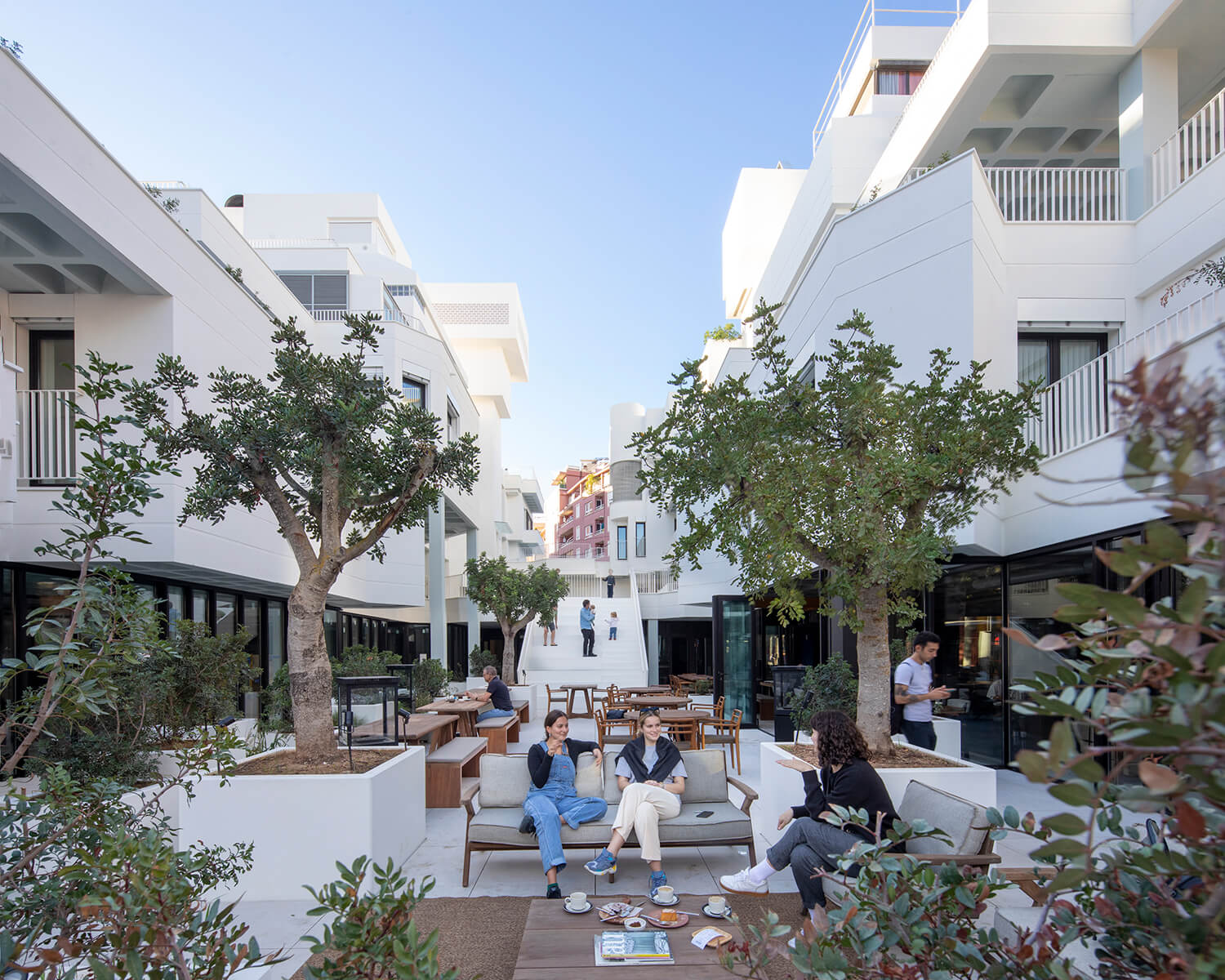 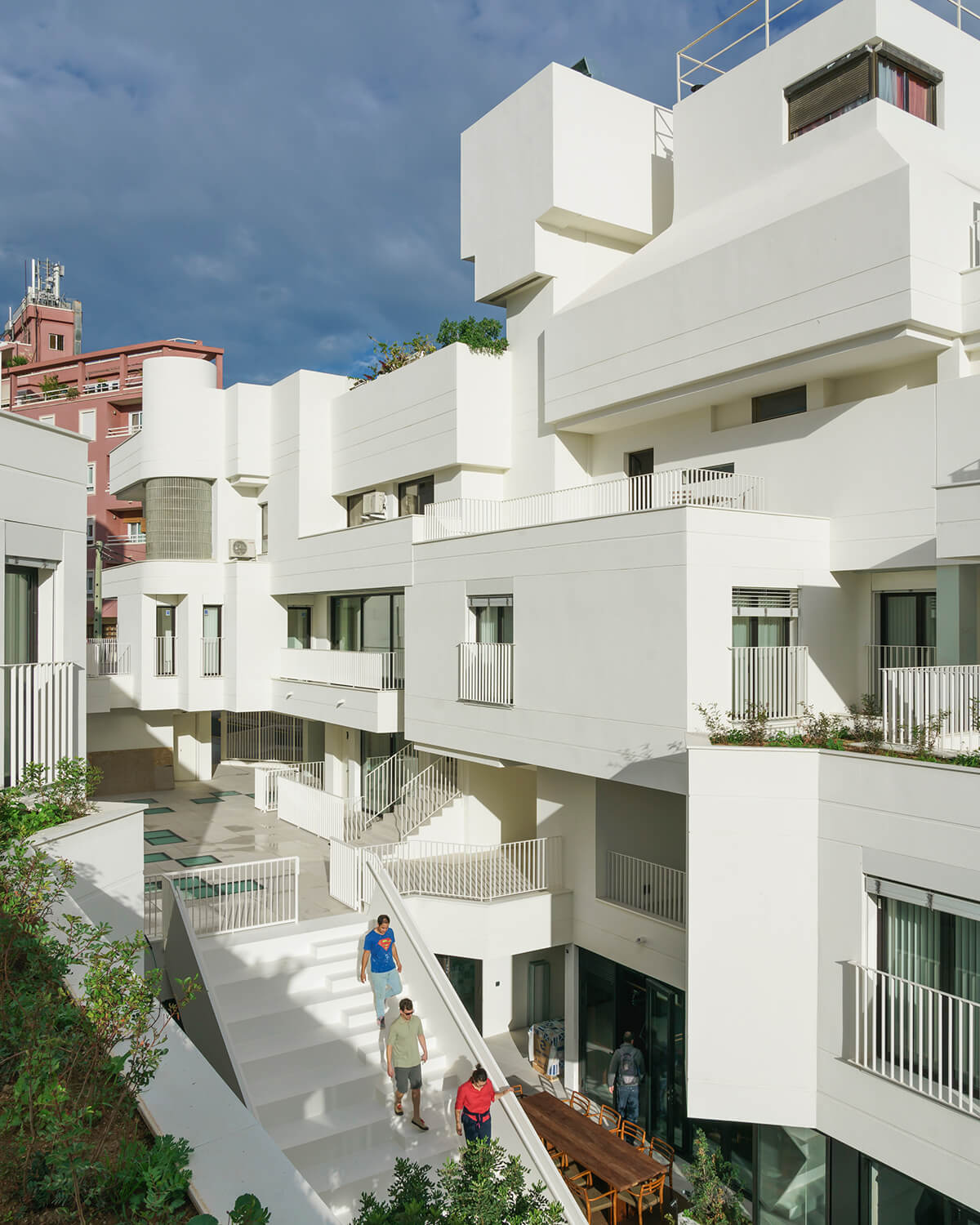 The first and largest of the renovated buildings is the Gomila Center. Originally designed by architect Pere Nicolau in 1979, the structure is clad in crisp white stucco that reflects the hot Mediterranean sun. Comprising two wings that hold offices, residential units and a restaurant, the centre is anchored by a courtyard on the ground floor — both a public amenity and a design feature that allows for natural ventilation. The building’s social program stretches upwards along its large terraces, which also allow for rainwater harvesting. 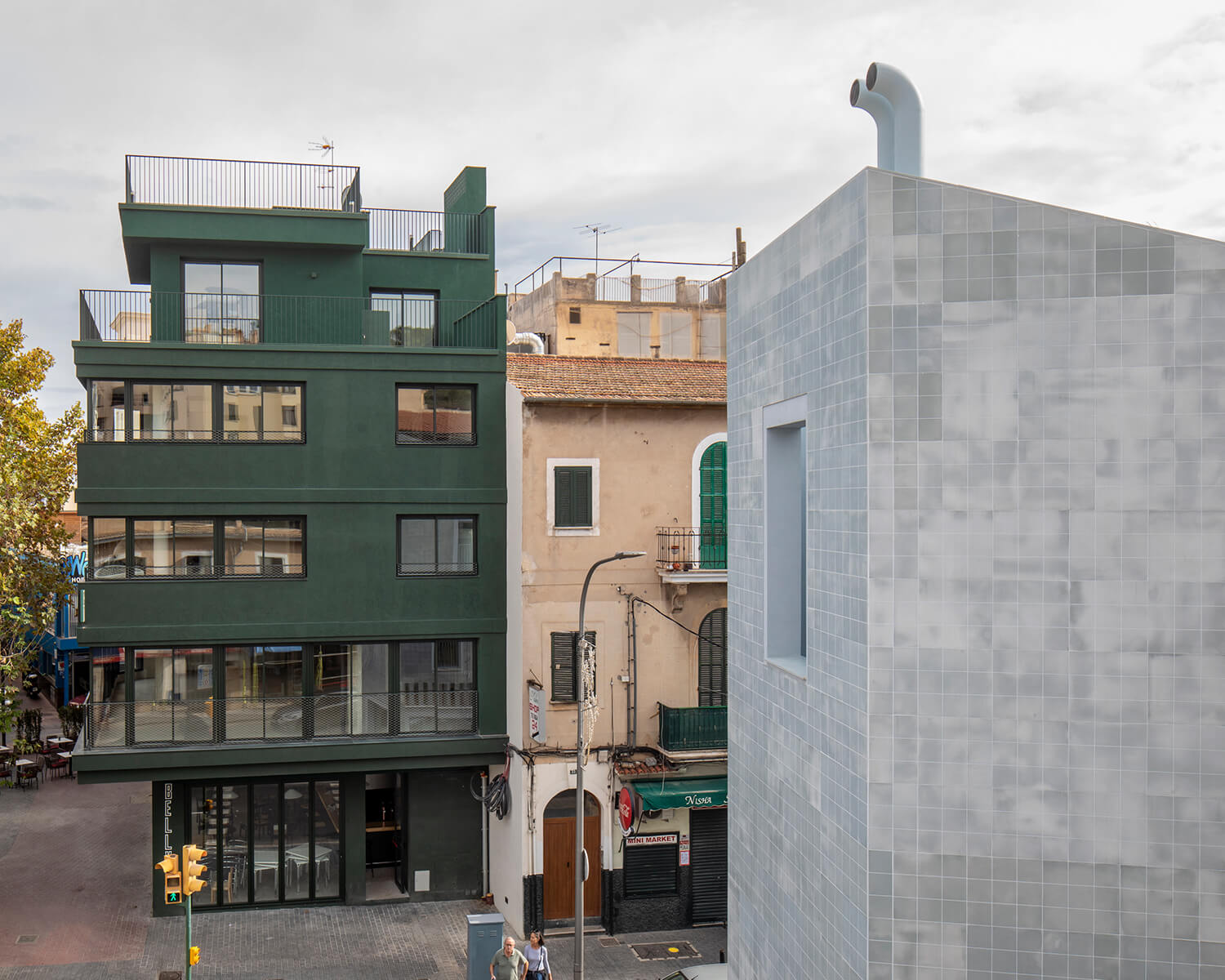 Across the street, the second refurbished building takes on an entirely different personality. Defined by its green-hued concrete structure, the La Plaza office complex features wraparound balconies that foster connection to the street. The building is bookended by two social spaces: the cozy Bar Bellver tapas bar at its base and a viewing platform on the top floor. 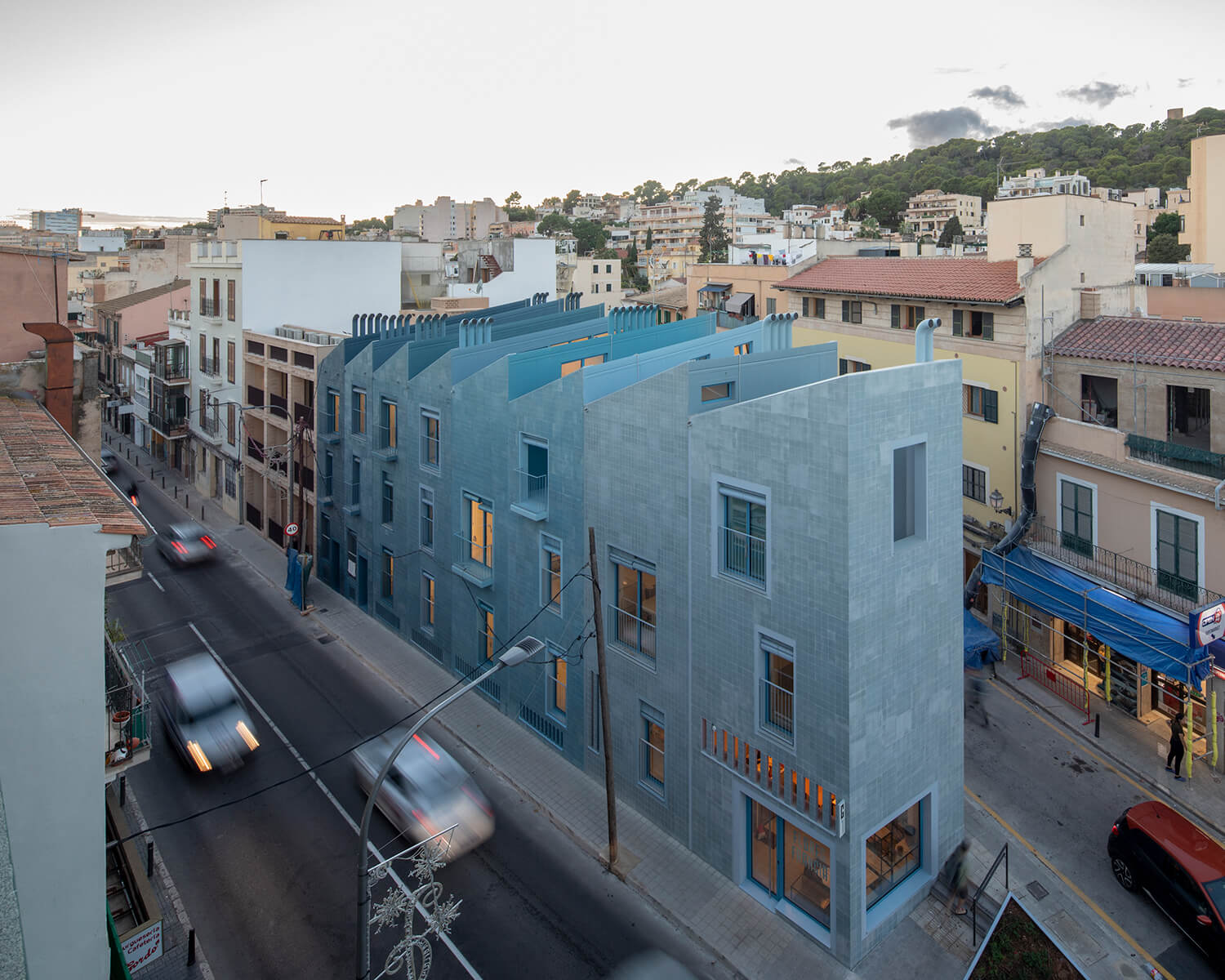 Project Gomila’s new construction is equally vibrant in colour. South of the Gomila Center, the Las Fabri-Casas rowhouses consist of eight blue tile-clad units with a sawtooth roof that playfully nods to the angular treads of Camper shoes. But the architectural move is not just an aesthetic statement: the sawtooth form begets clerestory windows that let in abundant natural light and offers potential for solar energy integration. 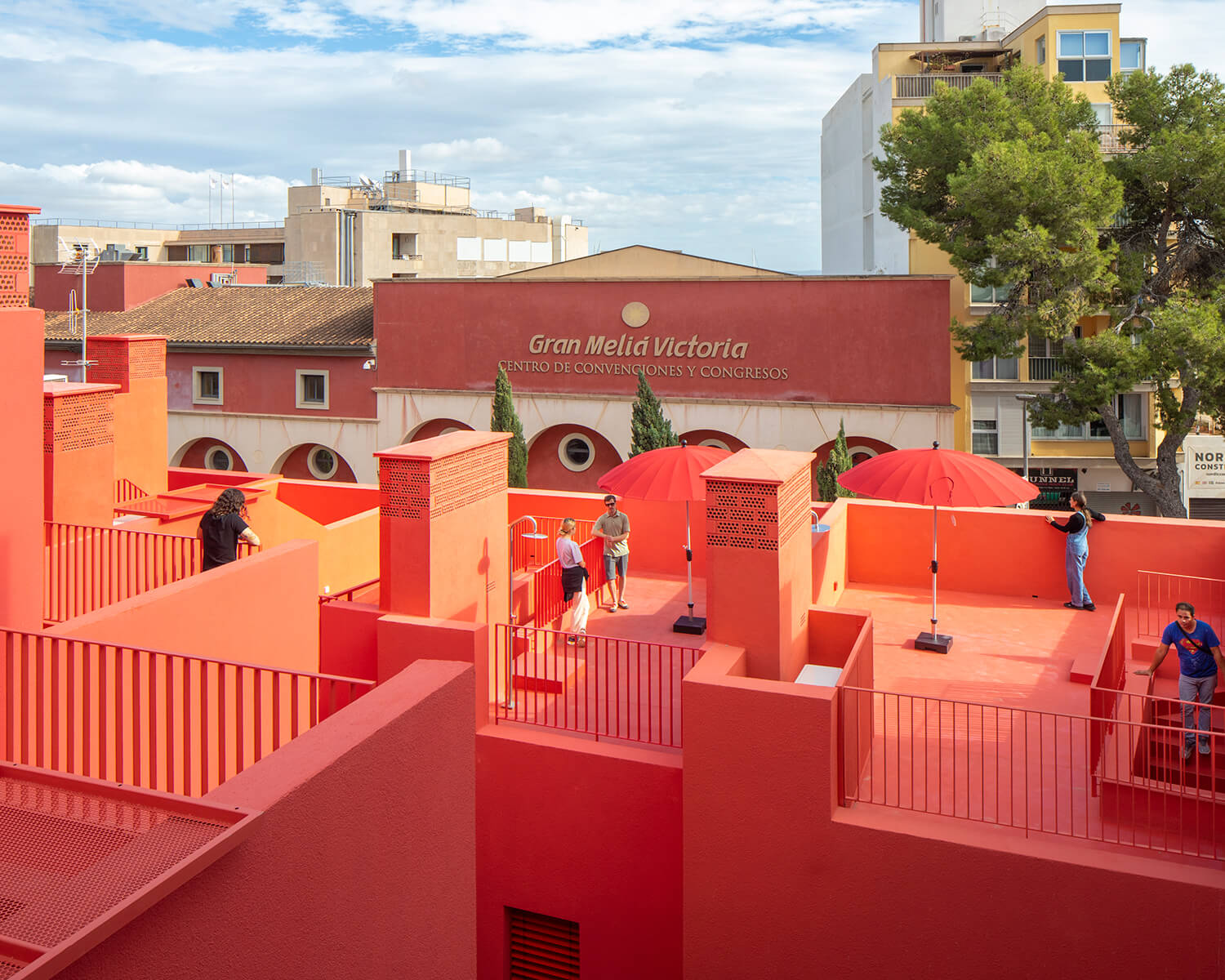 The Las Casitas townhouses to the North embrace the other side of the colour wheel — both inside and out. From the exterior, a subtle ombre effect echoes the design of , which was another collaboration with MVRDV. Bold red accents make for a striking interior, while a stepped roof forms a gathering space for residents. 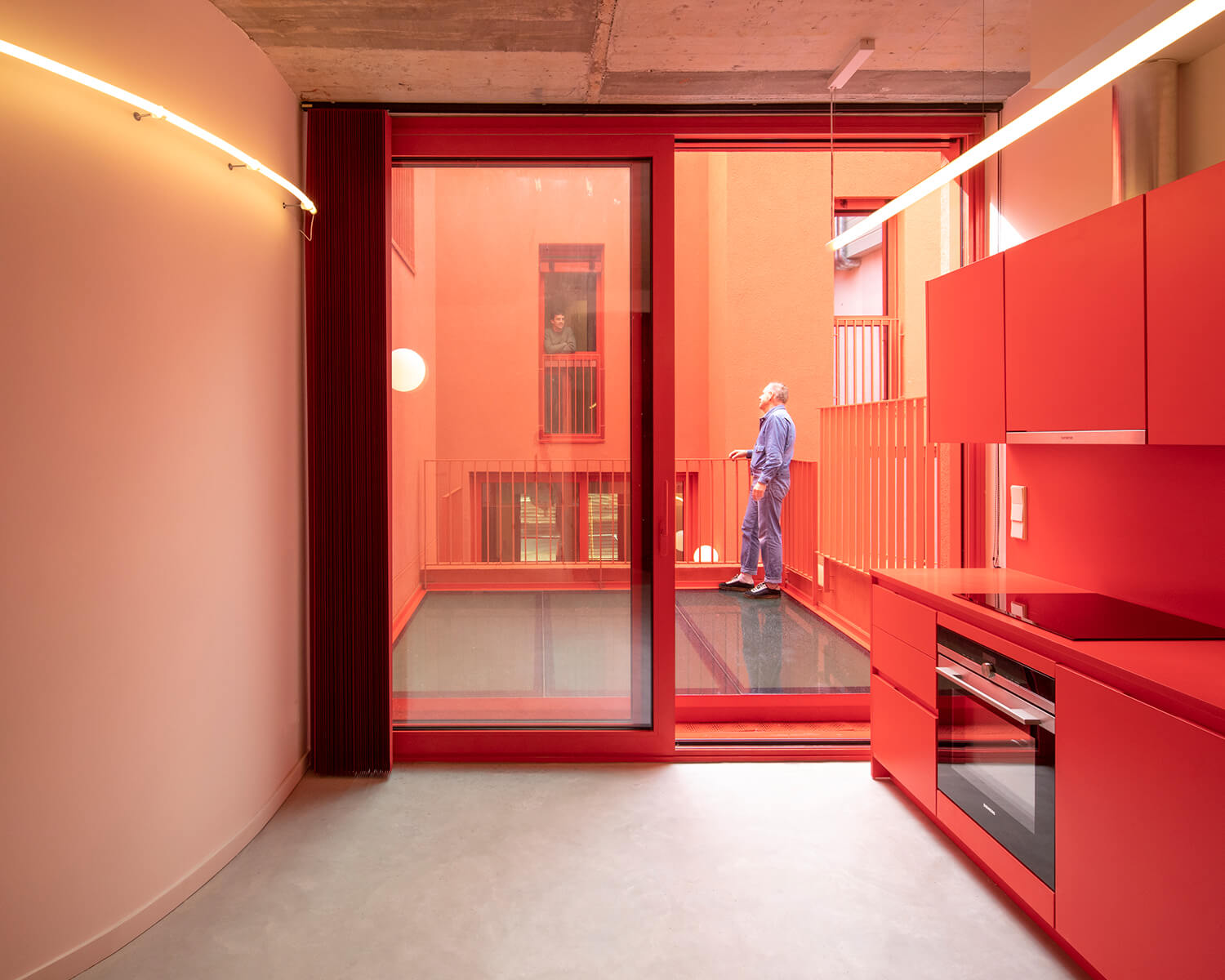 A more subdued apartment building made from rammed earth blocks rounds out the first phase of the master plan, featuring loggias on its street-facing façade and a rooftop swimming pool that overlooks the nearby Bellver Castle. The project’s second phase will be completed with two more renovations: a humble terracotta building with a pitched roof and backyard, and a sunny yellow structure complete with a central garden, called Casa Virginia. As for future developments in El Terreno, investors are rumoured to have plans for several hotels — including a potential Camper-style hotel on the site of Tito’s nightclub, and a revival of the modernist Hostal Corona. 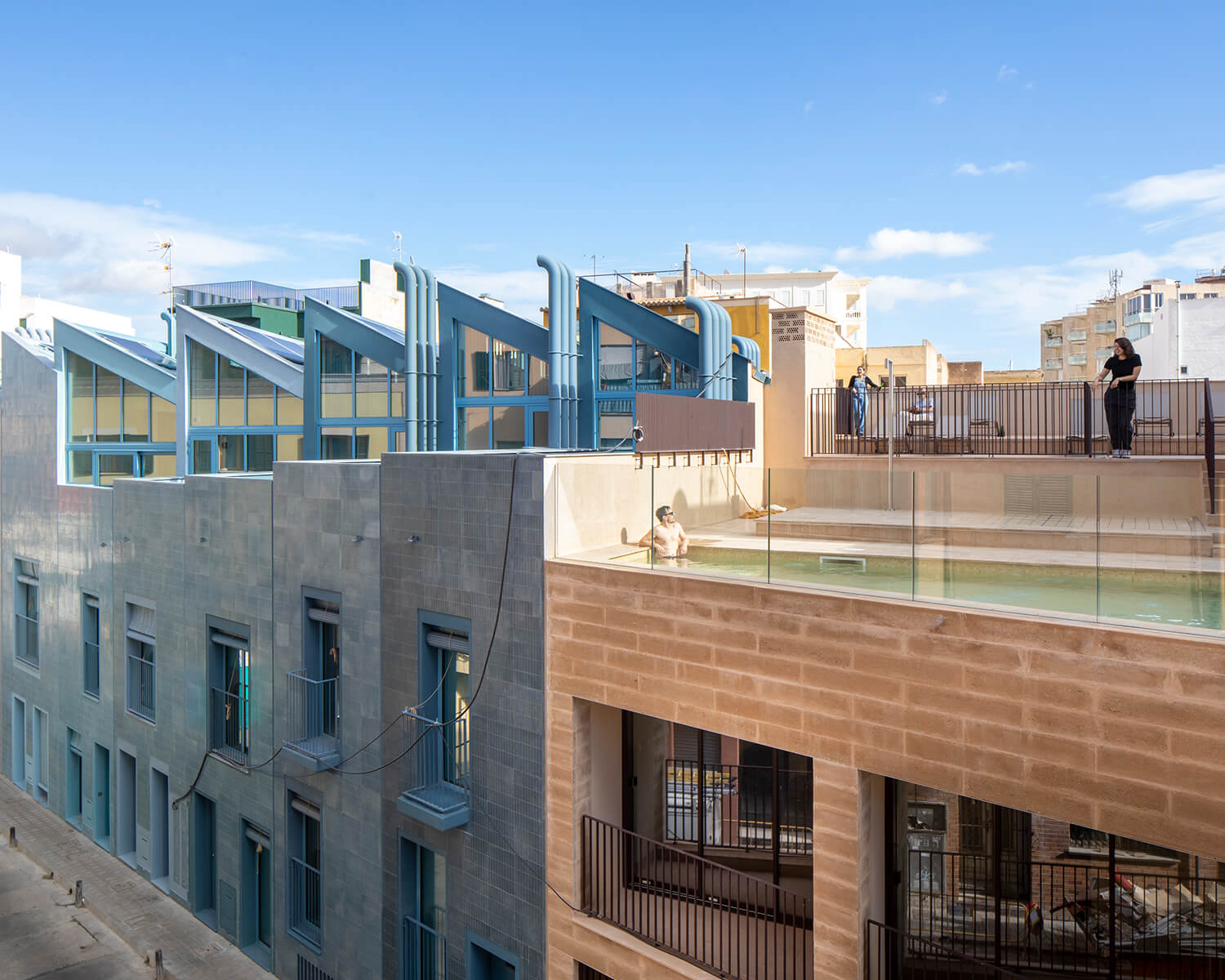 By embracing local materials and vibrant colour, each of Project Gomila’s buildings boasts a unique character while simultaneously bridging the district’s heritage and contemporary style. With the public square nestled at its core, the reinvigorated site is now a neighbourhood landmark once again. “The project goes beyond architecture or building design”, says Guillermo Reynés, the founder of GRAS Reynés Arquitectos and a native of Palma. “It creates a sense of community, a ‘Gomila belonging’ – something that has been missing for a long time in this part of the city but that has always been present in the memory of generations of Palmesanos.”