Marni’s New Milan Flagship with a Creative Intervention by Brinkworth & The Wilson Brothers. 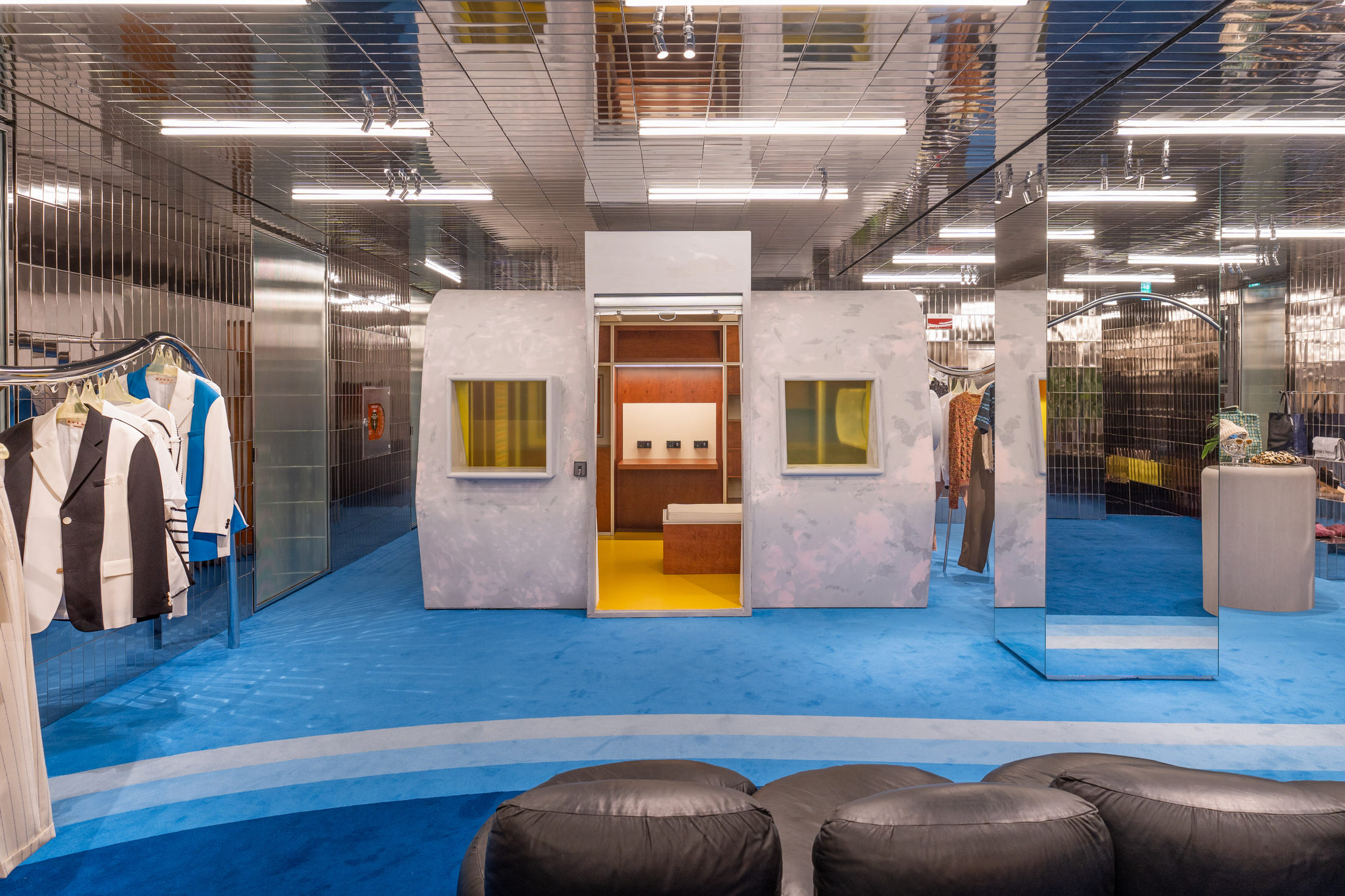 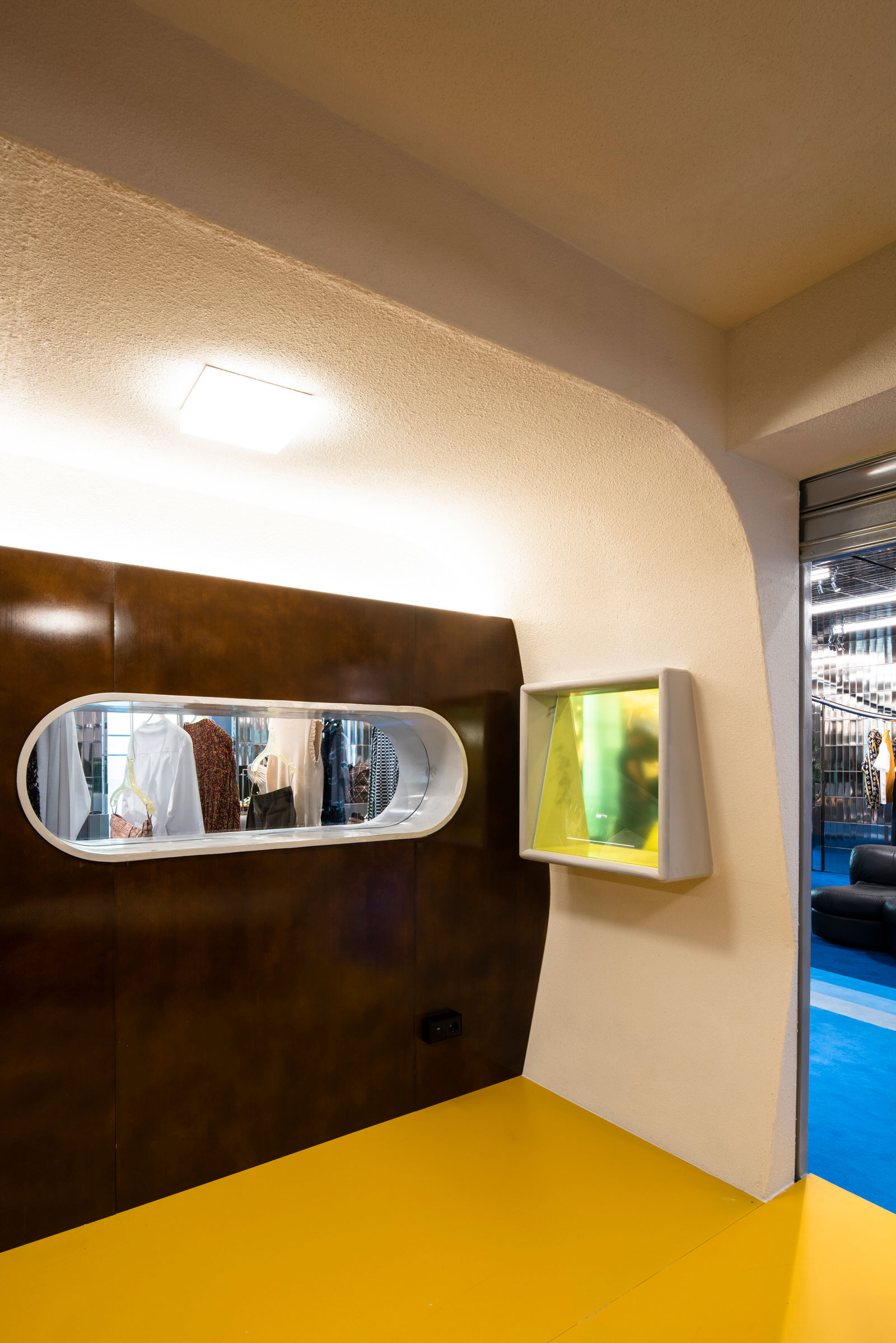 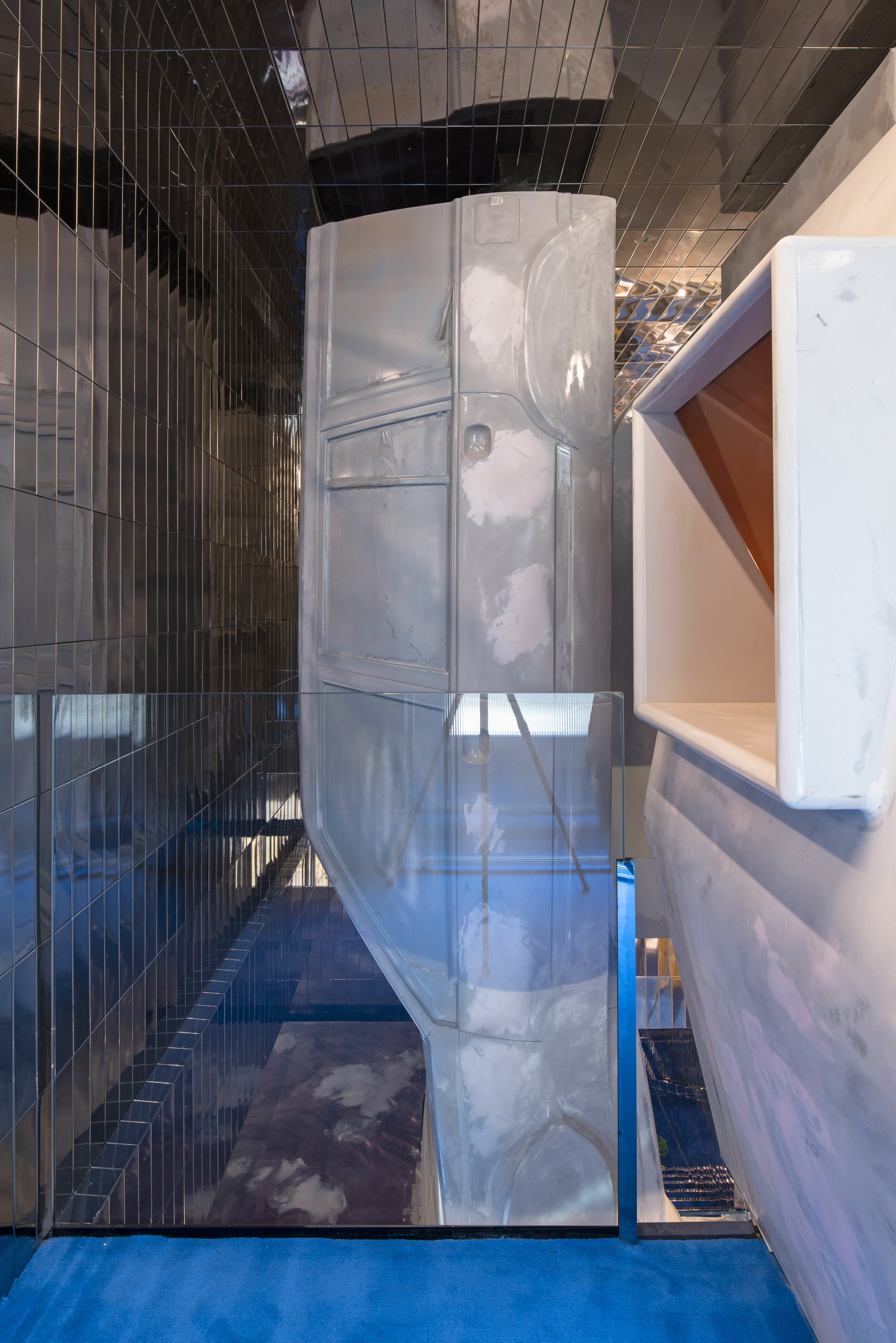 opened its doors to a new flagship on via Montenapoleone during the recent Salone del Mobile. Devised by Marni’s Creative Director Francesco Risso, together with the in-house architecture team, the interior is a creative playground where fashion, interiors and creativity converge.

The space relies on a rigorous vocabulary of unremitting architectural elements, setting the tone and defining the frame. Carpeted floors are juxtaposed with reflective walls clad in bevelled silver mirror ceramic tiles, creating a contrast between solidity and refraction, colour and mirror.

While the mirroring effect is obsessively perpetrated, creating an engaging system of visual multiplications, colour takes a new direction here, appearing as an unremitting, sharp sign. In a departure from past projects, an emblematic shade of ultramarine blue is introduced as the only chromatic accent, emphasising the interplay of clarity and boldness. 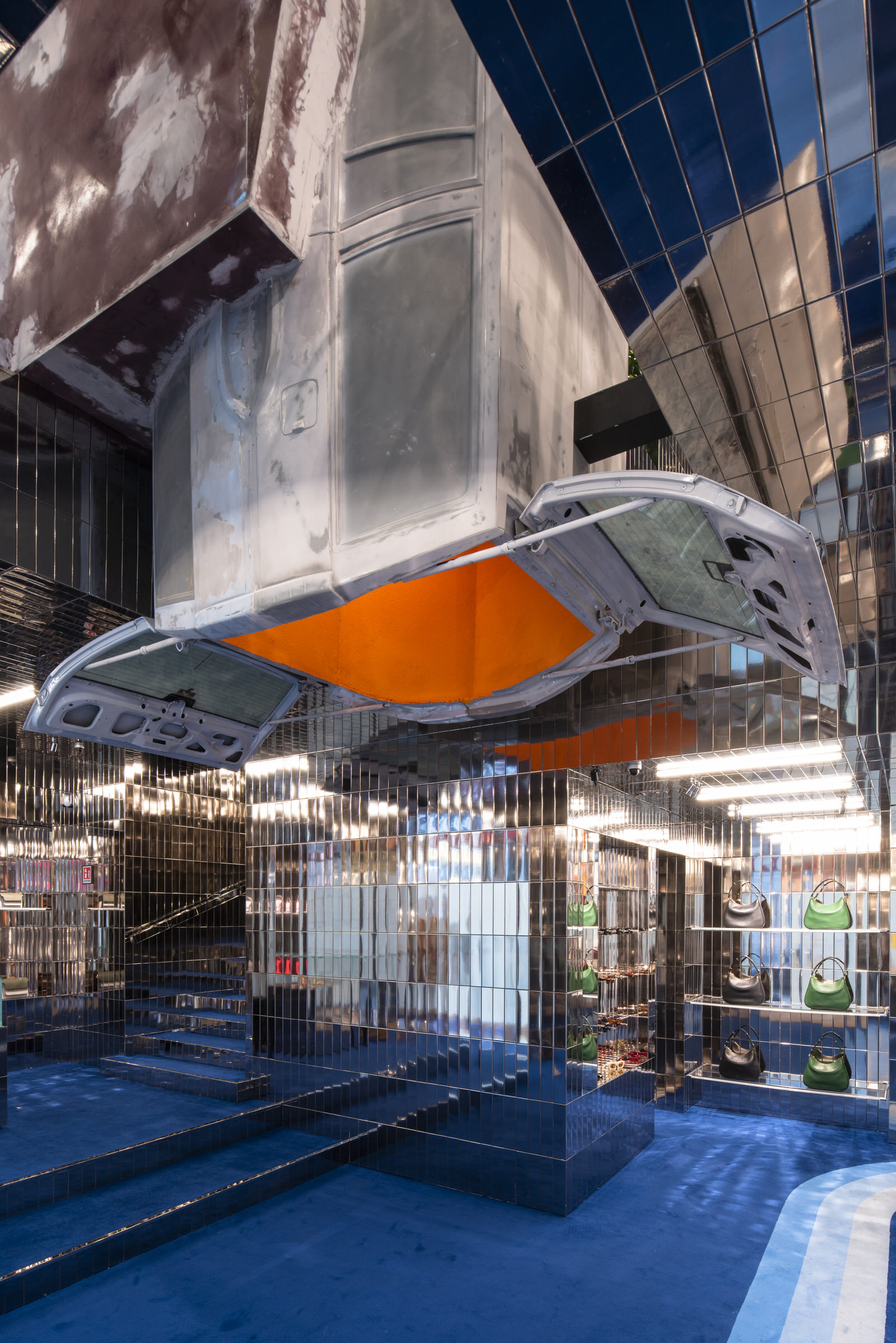 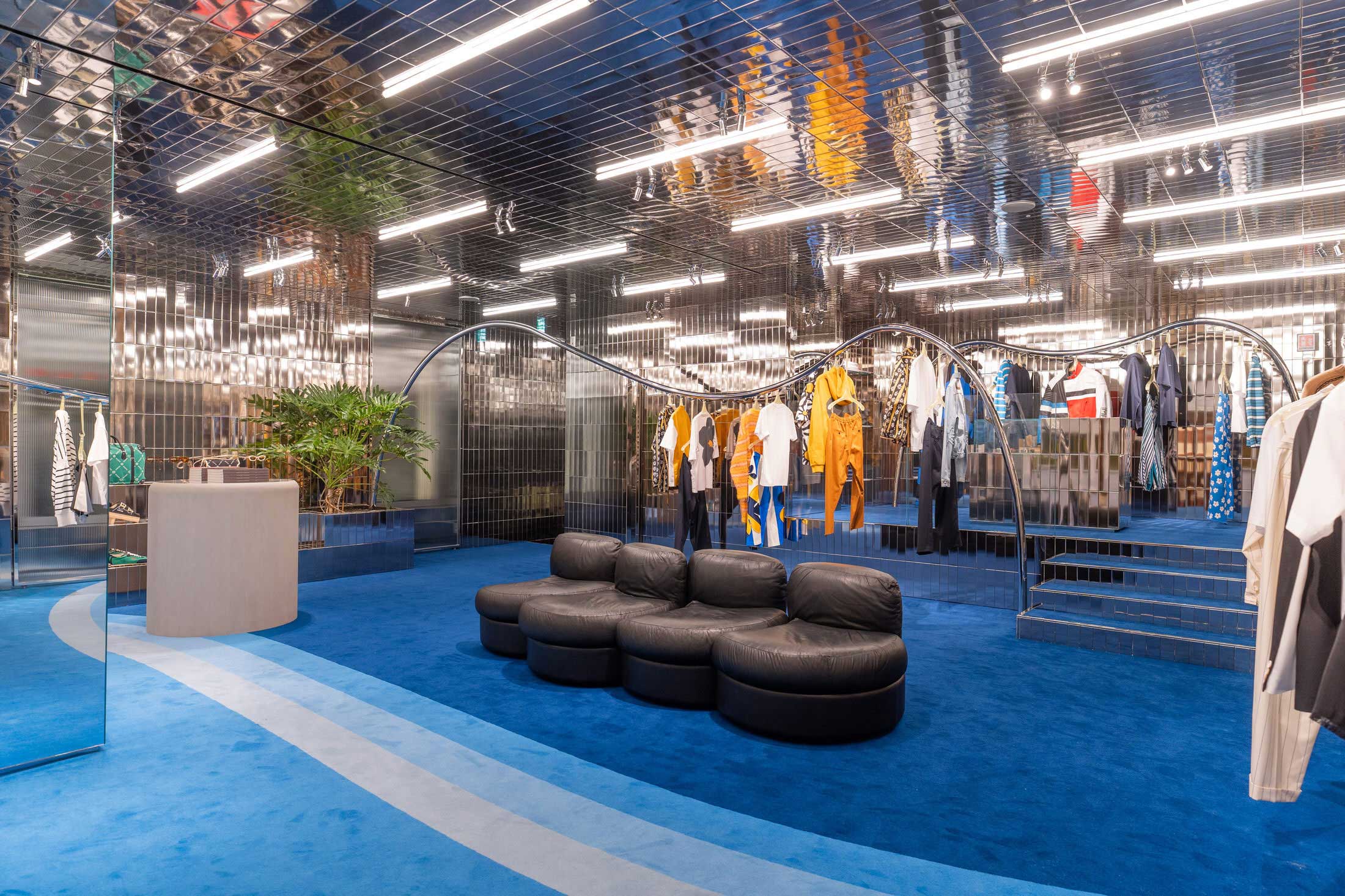 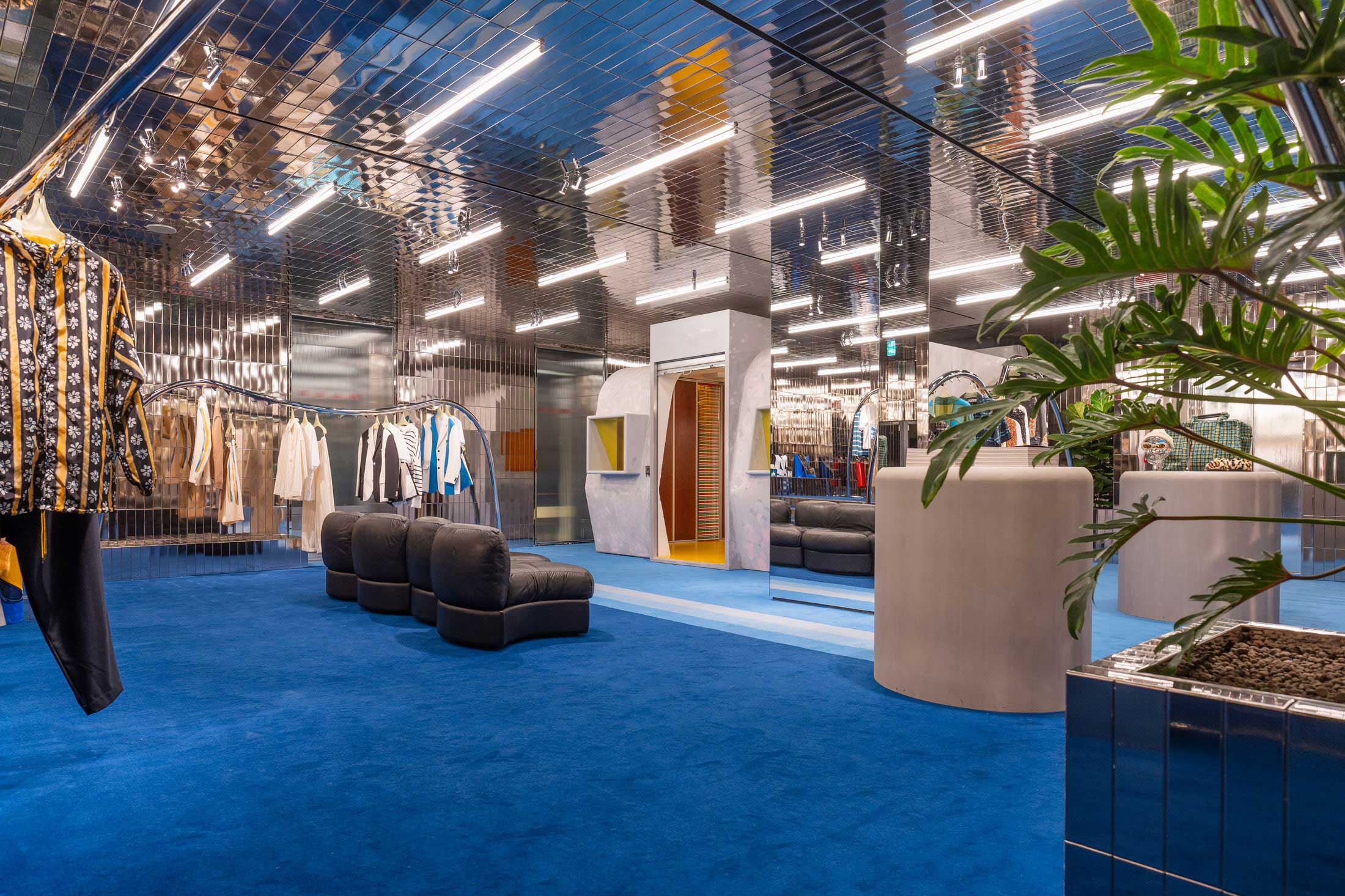 This cartesian rigour of square angles and tile-coated surfaces expands onto the ceilings, punctuated with led-neon bars and silver spotlights, contrasting with the sinuosity of Marni’s signature hanging rails and the vintage black modular round seats placed around the store.

Seeking to test the limits of the space further, Marni invited London-based studios and on a creative intervention, created in close collaboration with Francesco Risso and Marni’s Chief Marketing Officer, Chungaiz Khan Mumtaz.

“The project was born out of a desire to offer something more to the modern-day consumer: an experience; a creative interaction, as opposed to a mere retail transaction,” explains the design team Brinkworth. They wanted to bring creativity and culture—two things that Marni, and Risso specifically, are devoted to—into the heart of the stores. The idea was to funnel the intense creative energy of their studios into these spaces. 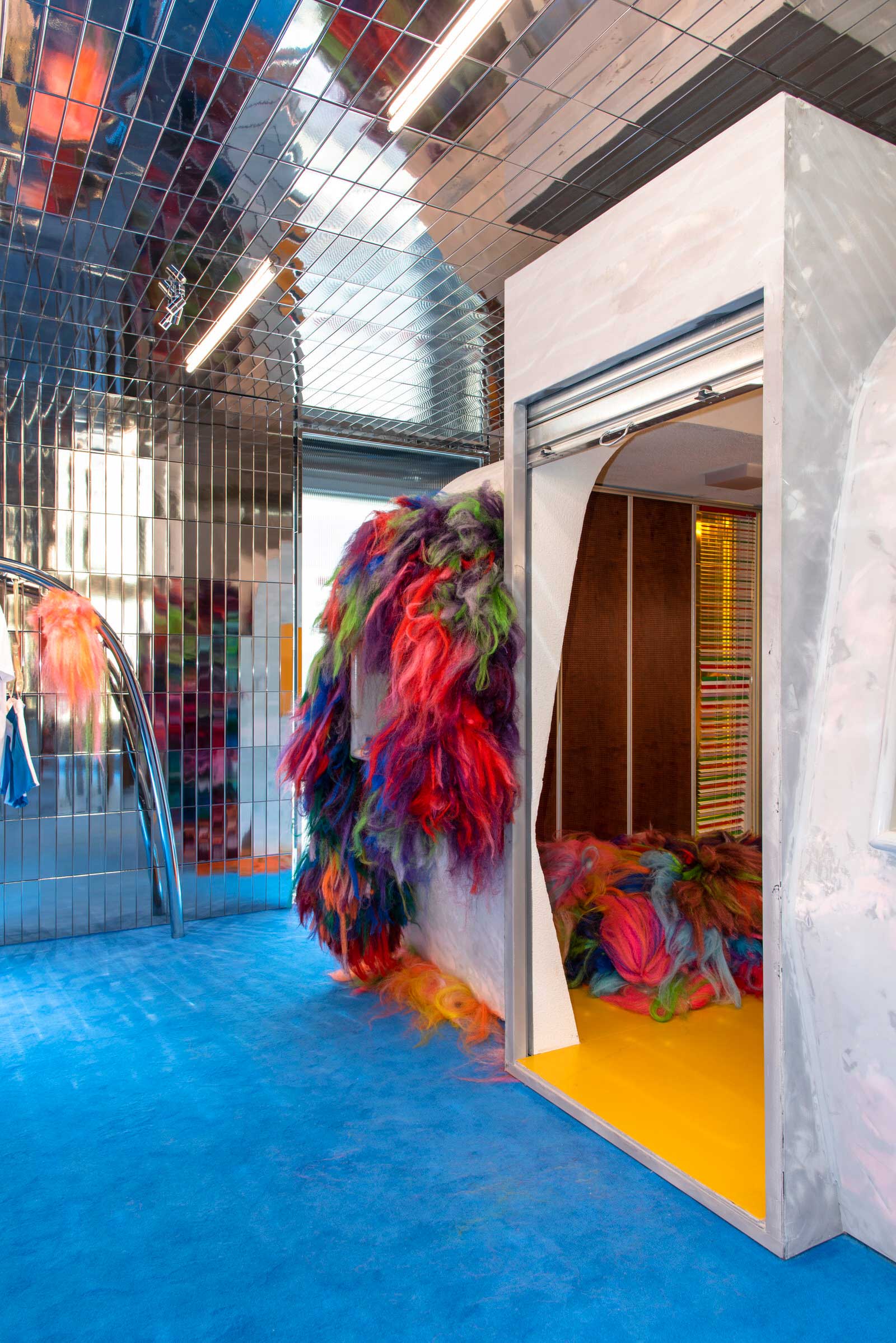 Shoplifter’s site-specific installation will evolve over a three-month stint. 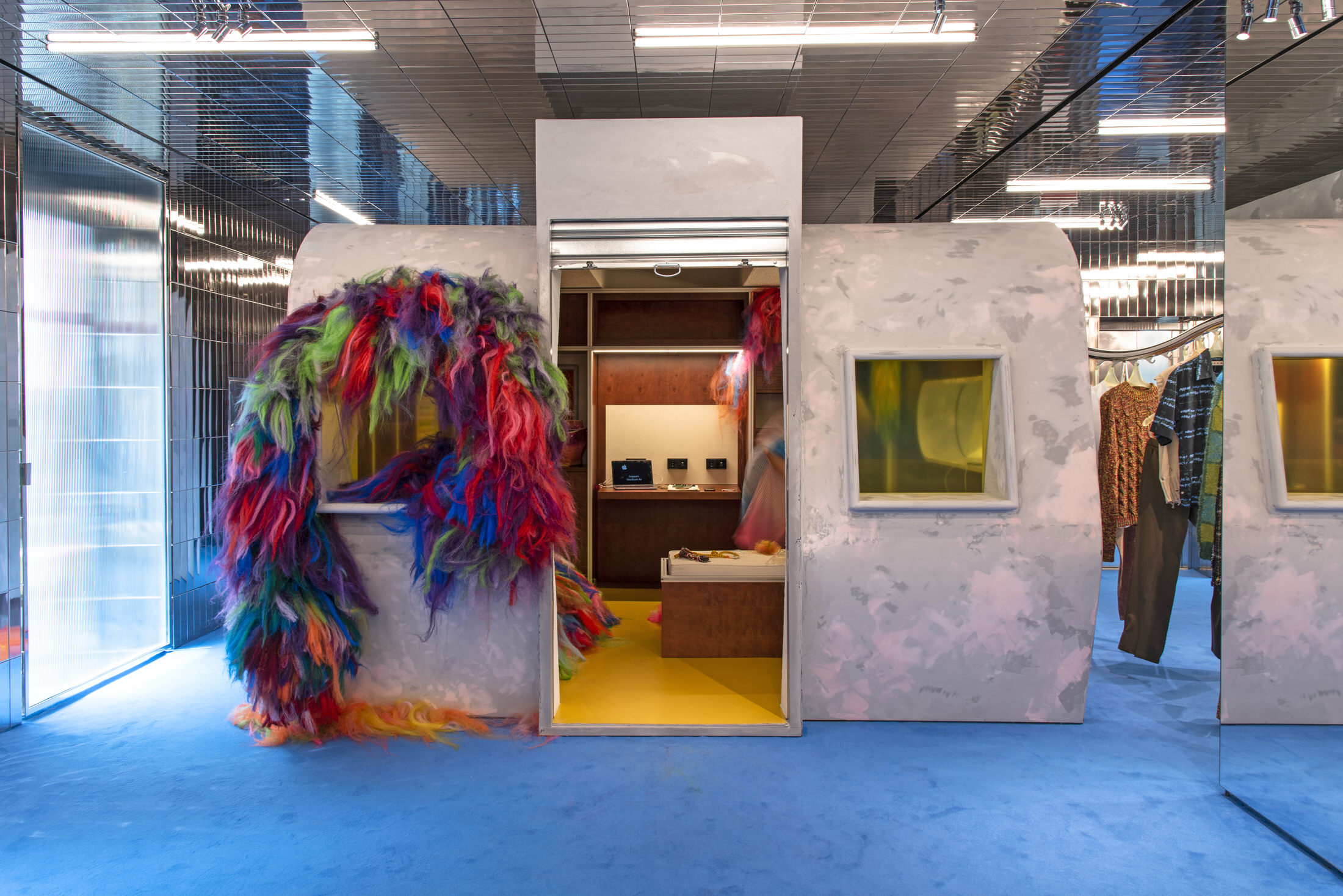 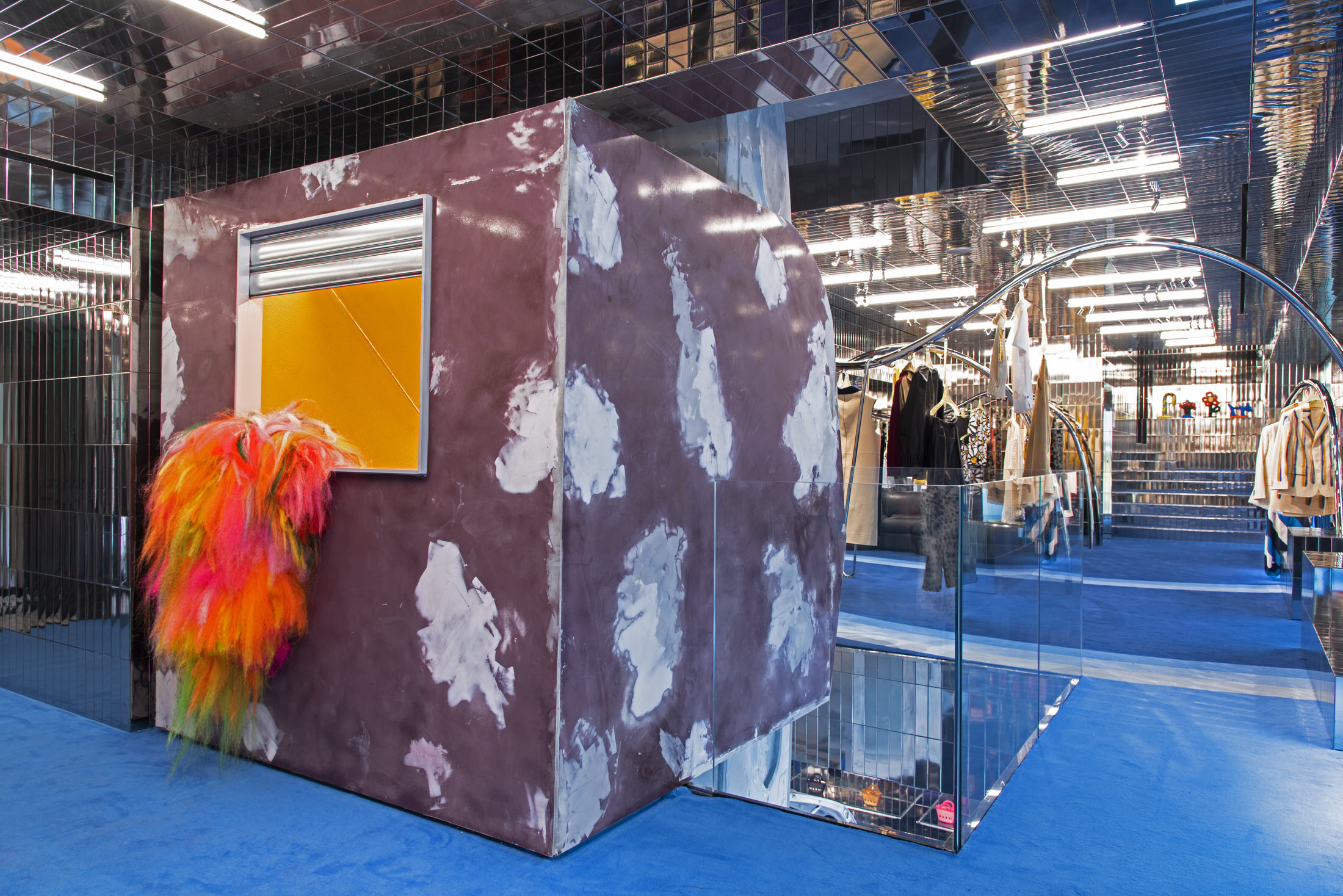 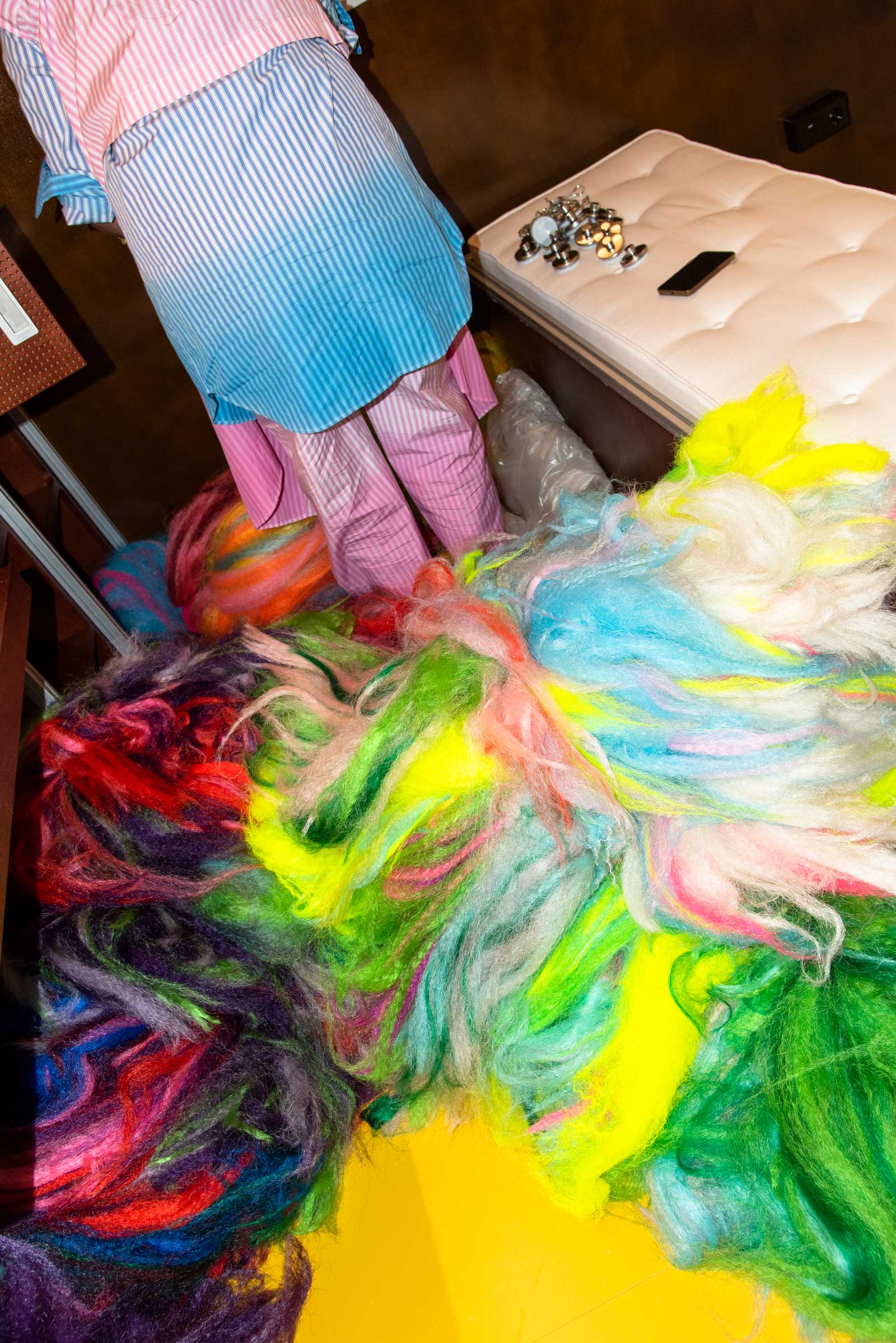 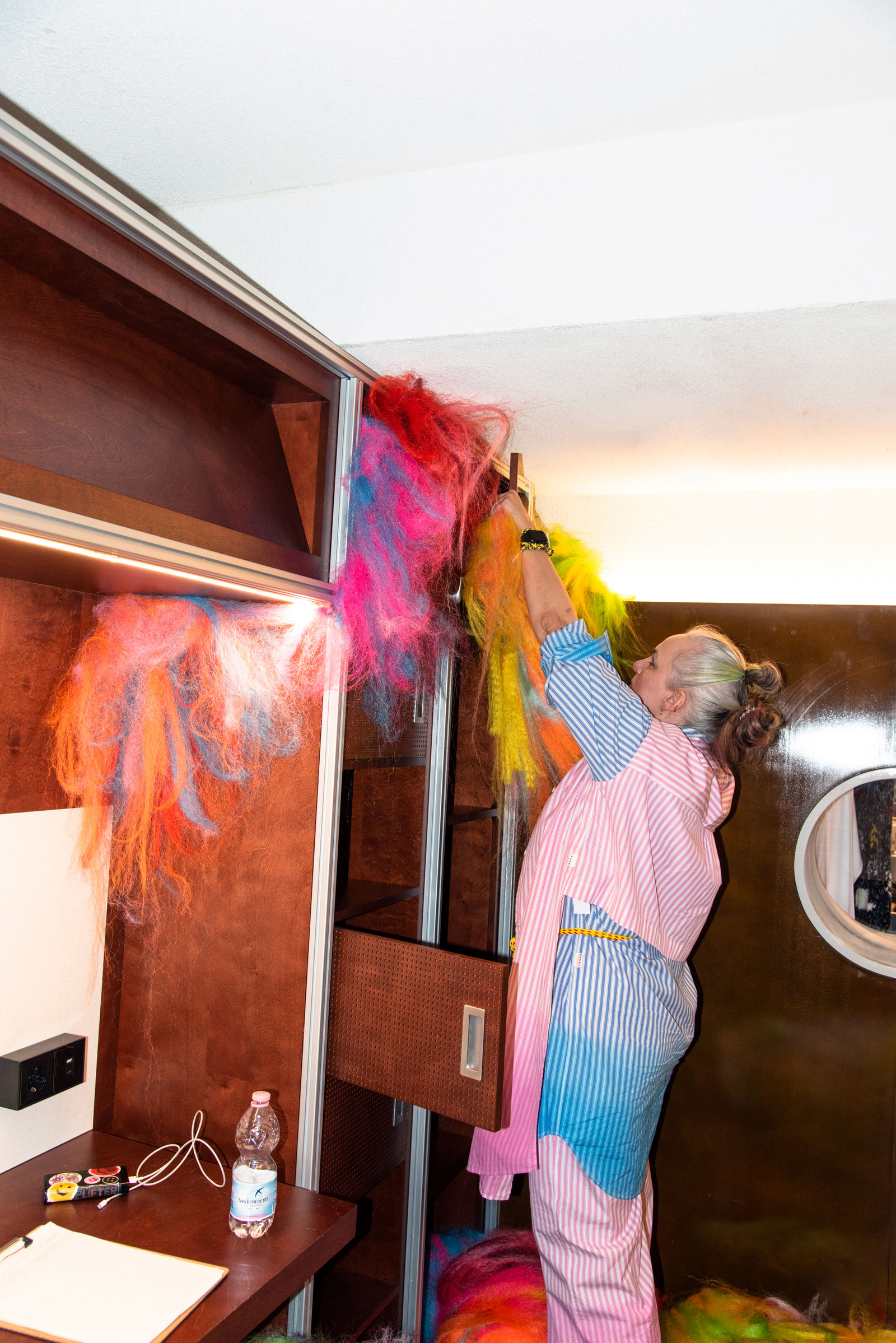 In response, in the centre of the interior, a fascinating, disruptive element appears as a stand-alone installation not necessarily devoted to retail. Dubbed a “vessel for creativity”, the space acts as an artist’s studio. Intersected across the three levels and accessible from the second floor, this surprising incubator appears from the outside like a mobile home. This space will be offered to a rotating roster of creatives who will occupy it in a form of residency.

The studio is also fitted with windows, allowing visitors to peer inside and watch the artist at work. Breaking down the wall between commerce and creativity, fashion and art, the artist studio tests the boundaries of what constitutes a retail space. Transient in nature, the studio can be changed and redecorated by each new artist ensuring it remains in a constant state of creativity and flux.

To kick off the artists’ residency programme, Icelandic artist Shoplifter has created a site-specific installation inside the store, which will continue to evolve throughout the artists’ three-month stint.

The new store concept demonstrates Marni’s commitment to creating a constant dialogue with the art as they look to redefine the luxury shopping experience.

Future-facing Retail: BELOWGROUND Hong Kong by Brinkworth.
A fusion of a luxury shopping mall, a multi-brand store and a contemporary art gallery, BELOWGROUND is a unique and future-facing environment, where the boundaries between luxury, streetwear, art and culture dissipate…